Awww yes. Flower Shop: Winter in Fairbrook. I started this insane exploration into visual novels and dating sims with Winter Wolves‘ Summer in Fairbrook, a little over two months ago, so I can’t think of a better game to close it out on.

That’s right: with this review as the gate closer, I’m officially calling VNADS 2014 finished. I really need to play some games that aren’t visual novels, you guys. I’m not done with visual novels for good, of course. In fact, I’m considering making VNADS a recurring event. Visual novels have been an interesting way to get through late fall and early winter. Who knows what November and December 2015 will hold? At the very least, the coming ten months should give me just enough time to power my way through Fate/Stay Night.

Yes. Yes. Look at this title and tell me what you see. 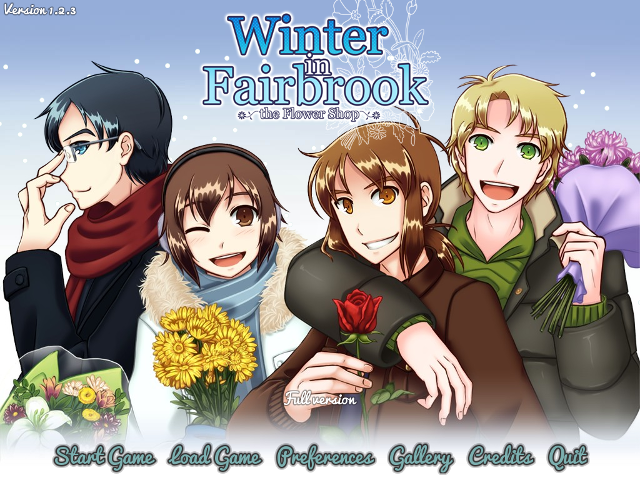 Where Summer in Fairbrook’s title sported four demure and conventionally attractive women, each of whom you could try to romance, Winter in Fairbrook opens up on four hunkalicious beefcakes. Yes, spell-check, hunkalicious is too a word. ADD TO DICTIONARY. Three familiar Fairbrook faces, and one of them is Steve! Remember Steve? I sure as hell remember Steve, he’s the reason I started playing the original game — and by extent, the reason for the past two months in general — in the first place. He was the player character in Summer in Fairbrook, but now he’s on the title. Does that mean I get to romance him this time? Because if so, sorry not sorry to Jacob, Trent and… glasses guy, but you’re out of the running before we even started.

What can I even say about Winter in Fairbrook’s options that I haven’t said about every visual novel options panel over the last two months? It’s there, it’s functional. It’s… exactly the same as Summer in Fairbrook’s one, actually, down to the now-wintery titular flower shop serving as the background image. 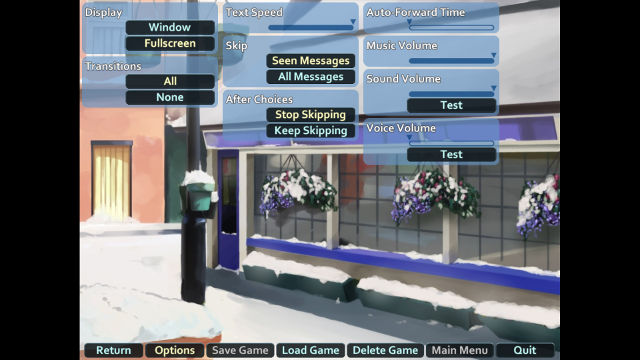 Here’s the one for this game… 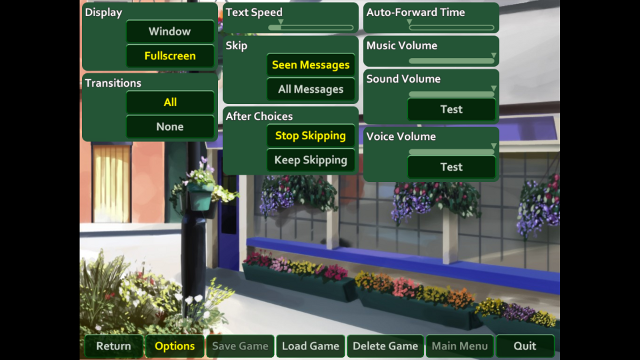 …and here’s the one for Summer in Fairbrook.

“I race up the stairs, one hand firmly on the railing so that I don’t slip on the bits of melting snow left by the other students who have passed this way.”

Good call, Unnamed Winter Protagonist! You’re already off to a smarter start than Steve, who started his adventure dashing down a flight of stairs and nearly stumbling into his girlfriend. Then again, Steve did have a girlfriend at the time, whereas you seem to be running towards an empty, messy dorm room. Let’s call that one a tie, alright?

And my protagonist this time around is called… Natalie! She has short red hair, shitty taste in motivational posters, and a propensity to wear form-fitting sweaters that accentuate her huge rack. 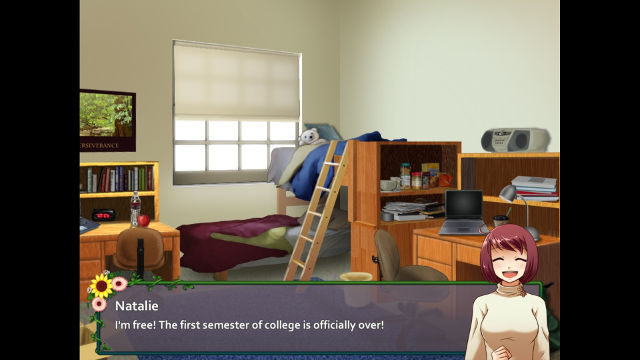 Seriously though, look at that goddamn poster.

Natalie is celebrating the first semester of college being over, which is a sentiment I can get behind even though universities where I’m from don’t really do ‘semesters’. Then, her roommate walks in. And that roommate is… hey, it’s Clara! Remember Clara? That girl from that earlier game I will ceaselessly keep referencing throughout this review? 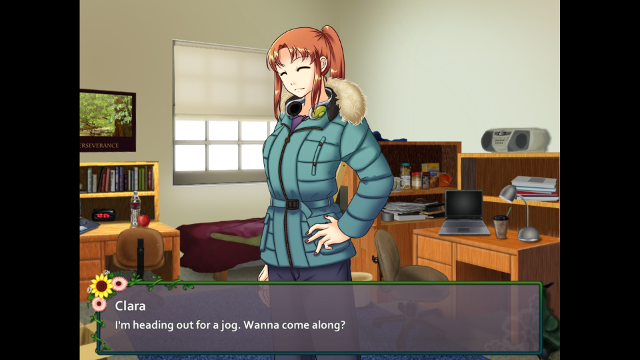 Hey, Clara! What’s up? Good that you got into college like you wanted!

It unfolds that while school is over for the winter, Natalie’s troubles are far from done. Her (lame-o) parents want her to get a job for the winter, can you imagine that? They think it’ll ‘teach her responsibility’, or some adult bullcrap like that. This is surely a unique and interesting plot that in no way mirrors Summer in Fairbrook.

Speaking of which: Natalie’s having trouble deciding what to do — “Absolutely no waitressing”, she insists, not really grasping the dynamics of unskilled temp labor — but luckily, Clara has a solution. A solution that only involves a bit of ‘manual labor’, nudge nudge. Actual wink. 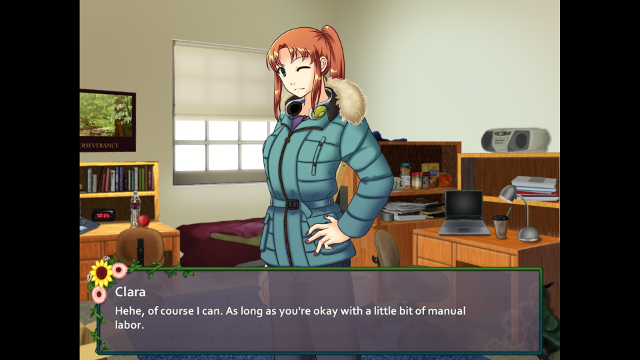 “I think you’d do really well in the field of competitive handjobs, is what I’m saying.”

Clara, of course, happens to have a friend in her home town. A friend who runs a flower shop, can you believe it? And that friend is always looking for some extra help during the busy winter months, when flower shops… sell all those flowers that don’t grow and easily die in the snow and cold? I’ll be honest: I’m not sure how this is supposed to work. 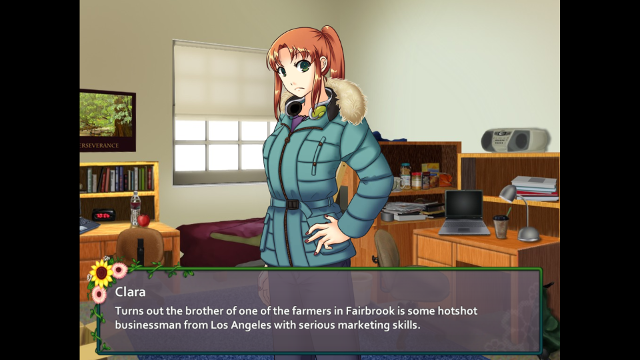 Natalie, like me, is lazy and easily placated, meaning she instantly jumps at this opportunity without doing any introspection or research at all. She accepts, quickly and succinctly emails her parents, and then spends the rest of the day playing video games until 2 AM heedless of the fact that she’s supposed to drive to Fairbrook the day after. 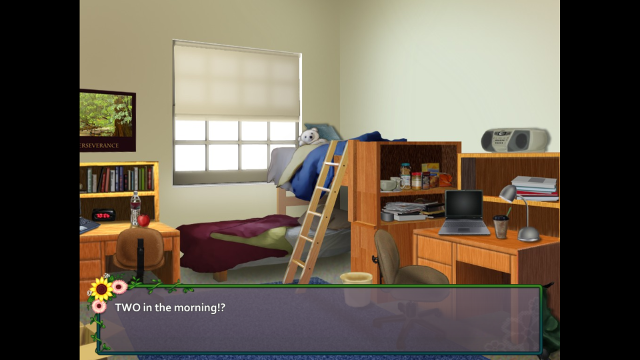 It occurs to me that Natalie is basically a mirror image of me, except with more trouble shopping for bras that fit.

One long, snowy, almost-disaster-filled drive later, and Natalie and I find ourselves in… 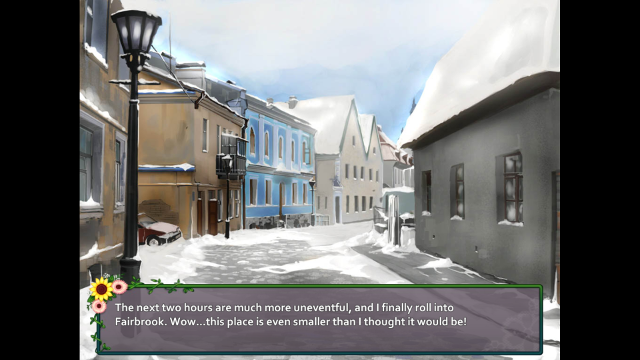 Fairbrook! My home away from home.

What follows next is a veritable whirlwind who’s-who of The Little Hamlet That Could. Everyone who was anyone during summer returns in winter, albeit in more seasonal clothes. First, obviously, Susana, welcoming me to her shop. 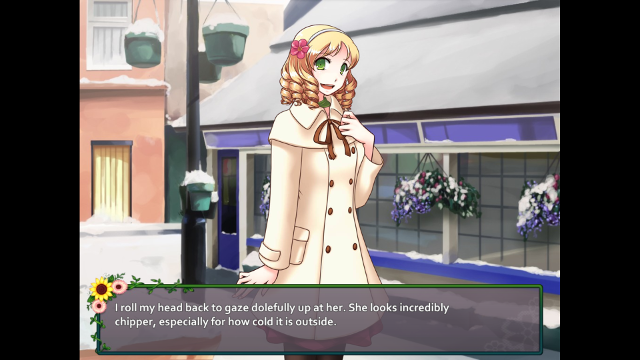 Then Jacob, and his eternal :3-smile. As befitting his title screen character-status, my first interaction with Jacob features a Relationship Status Bar, meaning I can almost certainly end up boning him if I so choose.

I could do this, but obviously that’s not happening. Susana, Jacob, good to see you! Listen: have you seen Steve around? 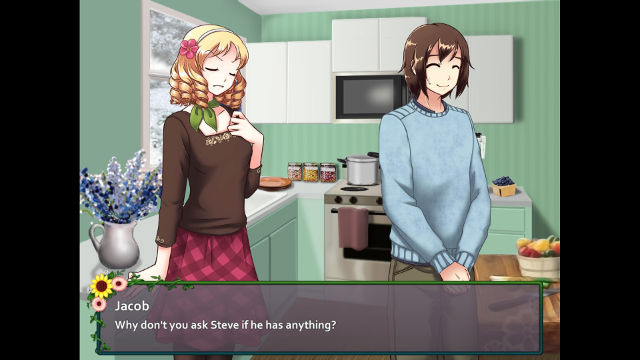 You have? Excellent. You happen to know if he’s seeing someone? 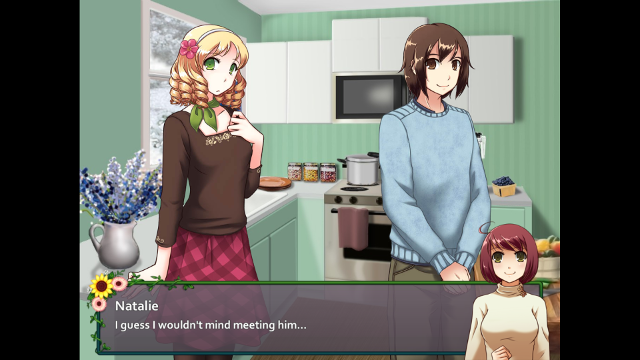 No Steve in the immediate future, sadly. First we stop by Marian, looking not-actually-older-than-anyone-else as always, and Trent, who’s busy making googly eyes at Marian. Trent is Romance Option Number 2, but why would I ever get in-between this lovely couple-to-probably-be?

Then, a quick stop by the general store, where… hold on a second, Fairbrook has a general store? How come I’ve never heard of this before? I get that Steve’s uncle had a food farm and they mostly ate off the land, but Steve never ever went to get, like, utilities or whatever? Stuff like turn signs, novelty bananas, giant rolls of fabric, or unspecified brown bags? 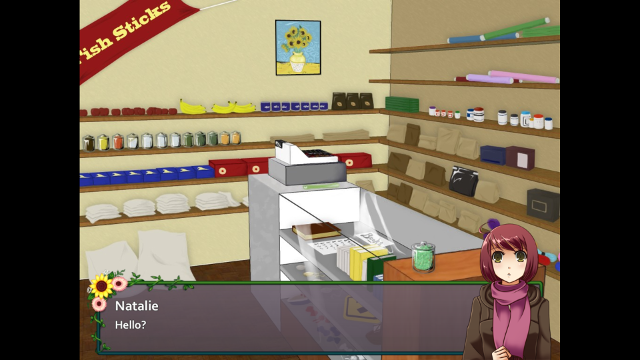 On second thought, I can see why Steve never came to this place.

The general store is home to Ryan, glasses guy and third eligible bachelor, who is very smart but socially somewhat inept. Such a unique combination of character traits. And did I mention he wears glasses? We’ll leave him for now, though: Natalie needs to get a package of some description back to Susana to get back into her good graces. And it’s during her stumbling trip back over the frozen Fairbrook streets that we finally run into our MVP: 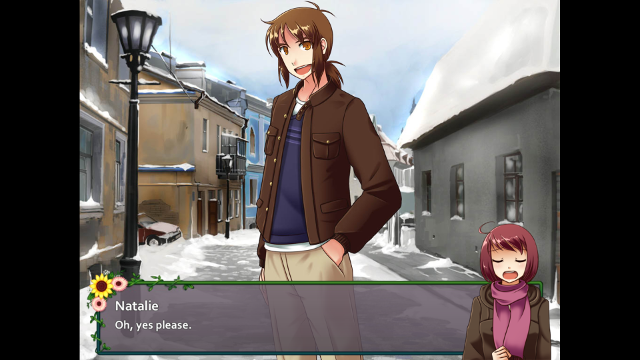 Steve! My main man! How you doin’? Are you seeing anyone right now?

Hey, Steve. Is that a relationship status bar in your pocket or are you just happy to see me? 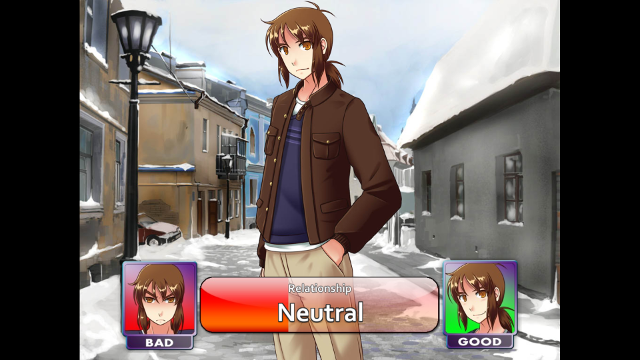 Steve and Natalie quickly bond over their shared-tropes backstory, and over Susana’s general hippy weirdness. Steve helpfully chooses to omit mentioning that he tried to get into her pants once, so we’re all good.

And on that note, our setup concludes. I’ve met everyone of import, which is to say Steve and those other characters, so I’m ready to take everything Winter in Fairbrook has to throw at me in stride. Be back on the next page, which hopefully starts with me macking on Steve!