In the last episode of Jarenth Plays Beyond Earth, the Franco-Iberian people took their first tentative steps into the sweet robotic future of Supremacy. Our units are sleek and angular, our guns fire strange undefined plasma, and our colours of choice are black and yellow. Fully half of each of my cities currently looks like Human Revolution’s neo-Detroit, but it’s safe to say that we did, in fact, ask for this.

It’s clear not everyone is happy with the glorious robot evolution. Le Coeur’s Intrigue level just keeps rising! It’s at four out of five diamonds now, which I can only assume is not a good thing? I mean, I still haven’t seen anything happen: so far, it’s been a whole lot of ‘Covert Operation Detected’ and a whole not of ‘And Here Are The Consequences For You’. I’m almost tempted to just… let the spies fall by the wayside, if they’re that lacking in impact. 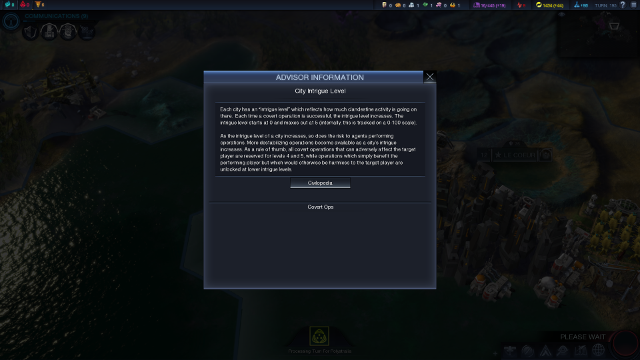 I still wonder who… No, I’m not actually wondering. I bet it’s Vadim pulling the strings on all this. He must be feeling my breath on his neck as we speak. Hey, Vadim! Are you anxious yet! I’m pulling ahead in score! I’m coming to steal your first plaaaace! 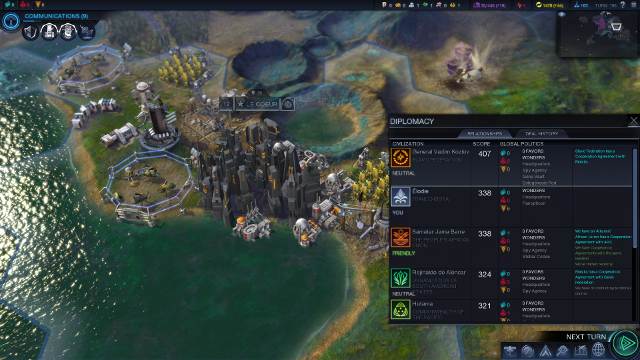 Vadim stop growling at me all the time, Jesus. 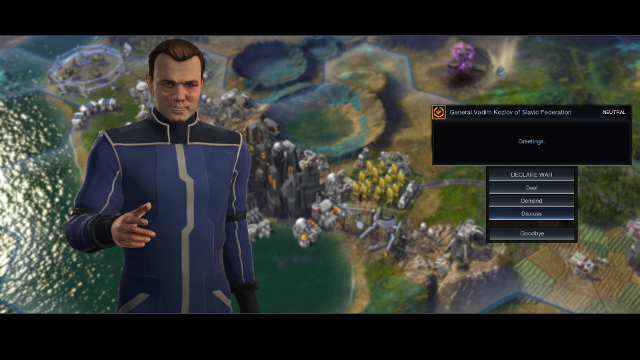 I briefly play with the idea of bribing Samatar and Suzanne into going to war against Vadim. I could just declare war on him myself, but that seems counterproductive and then some. But maybe if I fight him by proxy… sadly, neither of them seem interested in the idea. Suzanne doesn’t see the profit in fighting a long-distance war against the objectively strongest player, and Samatar… well, Samatar is Samatar. 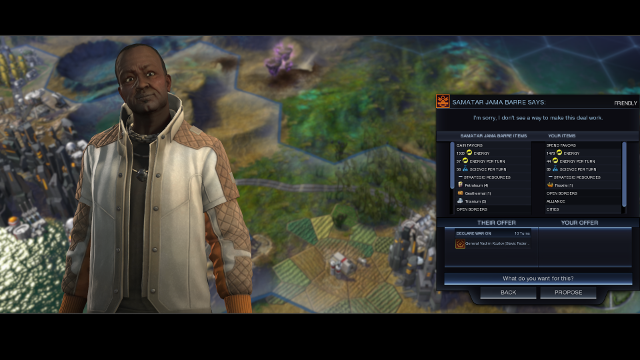 Eh, whatever. I’ll keep doing what I’ve been doing: slowly but steadily encroaching on Vadim’s top position. By building Wonders, for example. Like this one! 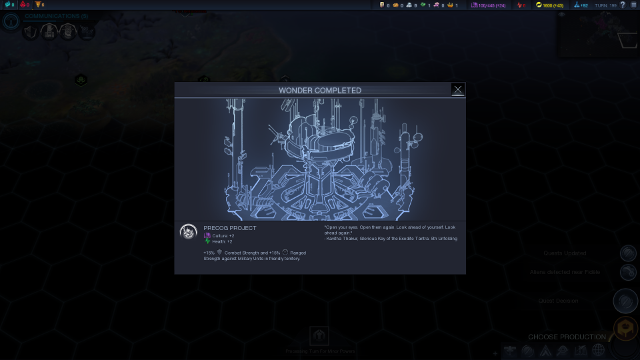 We already had the omniscient surveillance system slash supermax prison, and now we add to that the pre-crime division from Minority Report. This impromptu surveillance state of mine is coming along quite nicely, wouldn’t you say? I figure the Master Control, a city-spanning Artificial Intelligence overseer that boosts Culture and Worker movement, should nicely round out the trifecta here. Surveillance, knowledge, control. 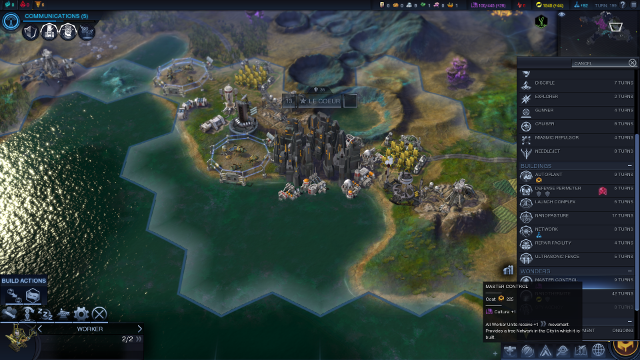 “Welcome to Franco-Iberia! WE KNOW EVERYTHING YOU’RE DOING.” 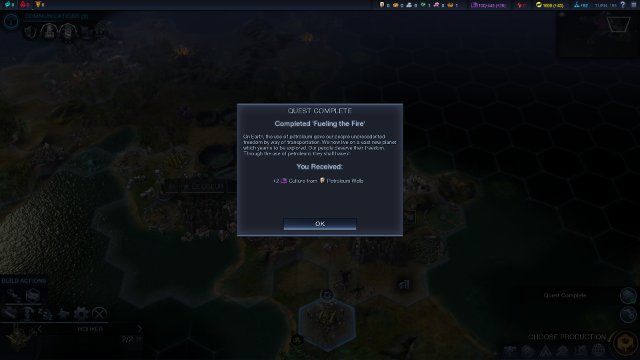 Say what you will about this quest, though, but at least I can complete it. Unlike certain other quests I could name. Yes, I’m looking at you, Familiar Exotics Part 2! I’m still pissed that you’re putting me in this impossible spot.

I briefly follow up on a little brain-wave: what if I assign Aintza’s Petroleum tile to Le Coeur instead? When cities are close enough together, those tiles that fall in both their spheres of influence can be assigned to either city at your behest. But alas, Le Coeur is just too far away from the Petroleum to be able to lay claim to it. I mean, I kinda knew that already, otherwise I wouldn’t have built a second city specifically to grab those resources. I’m still sad, though.

(And as a side note: I’ve read a fan theory that claims that the reason these capital city-related quests go sour as often as they do is because the game doesn’t just check for the resources your city can currently reach, but also for the resources it could have reached if you’d placed the city in one of the other potential starting tiles. Had I placed Le Coeur one tile to the right, something the starting episode shows I could have done, the Petroleum field would actually have been within reach. It’s an interesting theory, if a little far-fetched.)

Speaking of founding cities: after burning down a couple turns, Aintza manages to finish its new Colonist! And I know where this guy’s going… 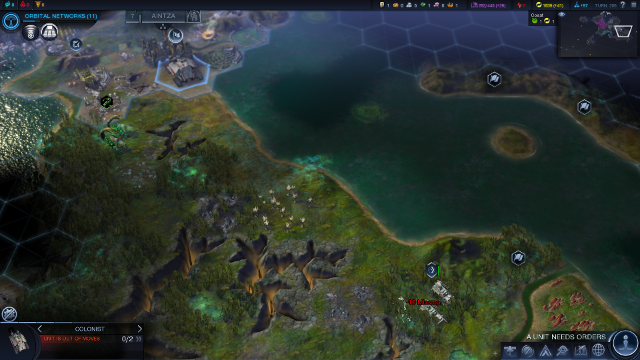 I bring one of the two tank squads back over, to escort the Colonist to its new home. Yes, ‘escort’, not ‘ensure they don’t make a break for it’. Why do you ask? What kind of leader do you even think I am? The other tank squad is parked square on the place I intend this new city to spring up, scaring away and all aliens.

Actually, I’m not even that actively involved in the alien-scaring. For reasons I can’t possibly begin to imagine, both Samatar and Vadim have sent doofy Gunboats over to my shores to bombard Wolf Beetles. I… I honestly don’t understand why they’re doing this? 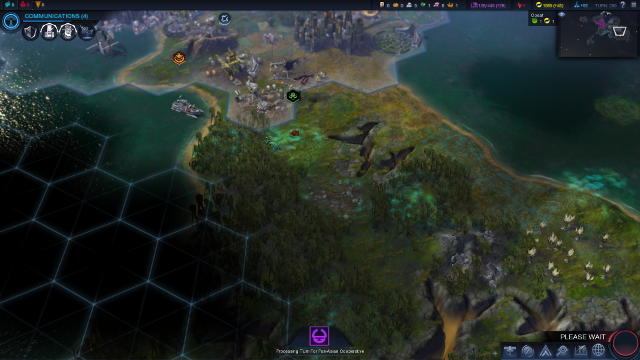 “Because screw these aliens, comrade!”

I mean, Samatar might just be trying to be helpful, that I can buy. But Vadim? Doesn’t Vadim hate me, at this point? The only reasons I can imagine for him shooting aliens on my coast are a) he’s softening the place up for an inevitable invasion, b) he’s grinding meaningless experience for his dumb little boat, or c) he wants something from me and he’s hoping this will make me like him more.

And he, look, surprise! Vadim Kozlov wants something from me. 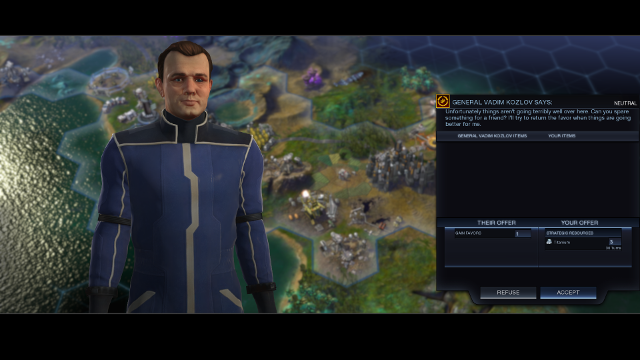 “In return, I promise to stop growling at you.”

I’ll be honest: I have no idea what Vadim is offering here. A ‘favor’. That’s a nebulous reward if I ever saw one. And that for three Titanium, huh? On the one hand, I kind of want to tell him to go choke on a pretzel… but on the other hand, something about the idea of the strongest colony leader on the planet owing me a favor for trading him some shiny rocks makes me giggle. Plus, who knows? Favors might be really cool.

Alright, Vadim, you’re on. I’ll get you your Titanium. In exchange for two terms. One, stay the goddamn hell away from my lands. And two, whatever you do, don’t use it to build a new wonder, thereby further cementing your position as pack leader an- oh goddamnit. 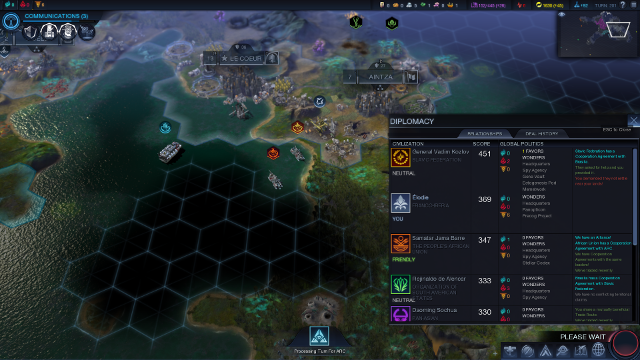 Vadim you went ahead and built a Memetwork while I wasn’t looking!

Vadim’s not the only one in the wonder game: Daoming Suchong constructed something called a ‘Markov Eclipse’ not two turns ago. They’re all trying to upstage me, huh? But I’ll show them. I’ll show them all.

On slightly more positive quest news, the completion of Prospérité’s NeuroLab has advanced the Point Of No Return Null quest. The NeuroLab is allowing Prospérité’s inhabitants to upload their minds to a virtual world, which most of them are doing en-masse. Can’t blame them, to be honest. This is, however, turning my second-largest city into something of a ghost town.

Two options here. One, I can relocate Prospérité, rebuild it as a virtual town, and recycle the old infrastructure to boost the rest of Franco-Iberia. Or two, I can provide the now-digital inhabitants of physical Prospérité with remote-controlled robotic tools, allowing them to keep ‘living’ in their old city. Doing so would require providing an extremely cool environment for the uploaded minds to reside — like, edge-of-space cool — but it would also increase the city’s Productivity by a certain margin. I like the sound of the last one the most, so let’s get cracking! 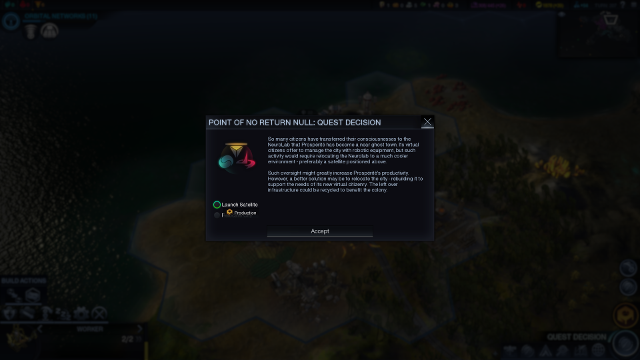 I forgot what the other option did. It was probably something incredibly dumb, so you can stop worrying about it.

‘Launch an orbital unit in range of Prospérité’. Sure, I can do that. Prospérité isn’t actually building anything right now, so I’ll let them craft their own new near-Earth-orbit home for their minds. Beyond Earth doesn’t actually specify which kind of orbital unit I’ll need, so I opt to have it be a Miasmic Repulsor. There’s like, one patch of Miasma still near Prospérité. Might as well get that cleared!

Time ticks by. I renew deals, reinstate trading routes, and move the units that need to be moved. I finish the study of Communication, which nets me a cool Supremacy-specific building, a new Science-boosting Worker improvement, and a new type of satellite, and I move on to Orbital Networks, which holds… that wonder Vadim Kozlov just built, so yay for that, but also something necessary for my final victory. I plot, and scheme, and craft improvements.

And all the while, the Master Control’s completion time grows ever shorter. Five turns, now. Four. Three. Two. One. Aaaand… 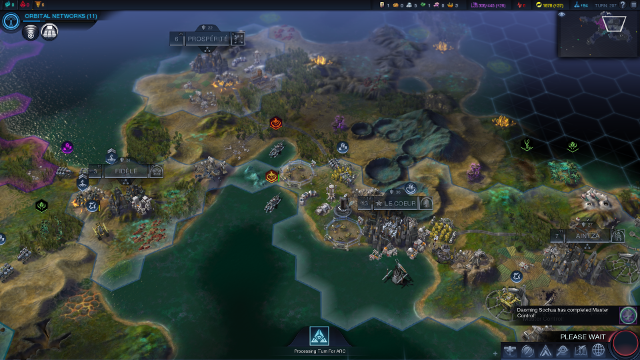 Ugh. She did, didn’t she. One goddamn turn, and she steals it from me. And I get… nothing. ‘The lost Productivity is converted into 203 Energy’, as a final slap in the face. Two-hundred Energy? I spit at your two hundred Energy! I made more Energy than that while building the Master Control itself!

Wow, I’m actually boiling with rage. Didn’t know I had it in me. I think I better step away from the keyboard for a little while, lest I do something rash and drastic. Remind me: are Planet Busters a thing in this game?

Next episode: Rage simmers into hatred, and I do something less ‘rash and drastic’ and more ‘ill-advised and mean-spirited’.