In the last episode of Jarenth Plays Beyond Earth, I made friends and influenced people. Specifically, Suzanne Fielding, CEO of the American Reclamation Corporation. Though cool towards me at first, a long-running series of developments including ‘me finally being useful to her through the medium of trade’ and ‘me being good friends with another guy she kinda likes’ have finally warmed her to the idea of an honest-to-goodness military alliance. And while neither Suzanne, Samatar nor me are necessarily front-runner contenders — okay, Samatar is actually doing pretty okay on his own, but Suzanne is literally in last place — I don’t think it’s a stretch to say that the power block formed by our three-way alliance may be the most impressive display of muscle on Terra Atlantea.

Let’s see if that claim’ll ever be put to the test.

Flush with confidence from my recent social victory, I make one more pass at Daoming. C’mon, Daoming, be friends with all of us! It’ll be fun! We’ll invite you to our secret clubhoouuuse. Samatar is there, and Suzanne… and me! I’m also there. 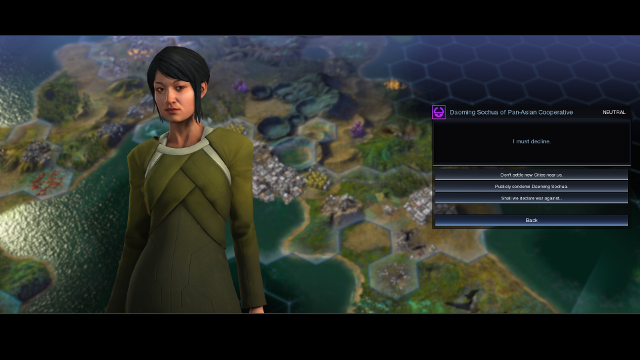 I’m disappointed, but alright. If that’s the way things are gonna be. At least Samatar still loves me unconditionally. 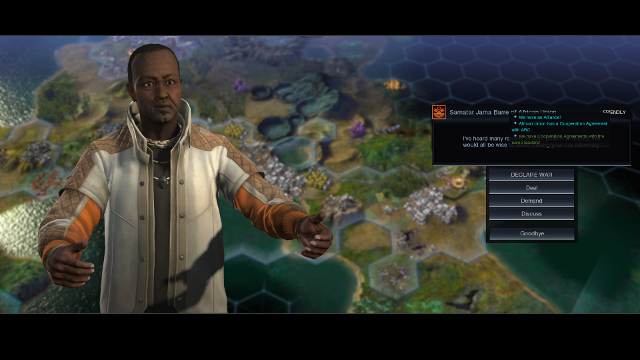 In fact, I figure, I might as well start making these friendships work in my favour a little. I call Samatar again, and put forward a proposition: since I’m the self-styled Science Guy, and you’re more of an all-around people-pleaser, why don’t you trade some of your scientific progress to me?

Unlike earlier Civilization games, you can’t actually trade technological advancements directly. I can’t, say, exchange my Nanotechnology for Samatar’s Alien Ecology. What I can do, however, is lease some of Samatar’s Science output. Essentially… hiring his scientists to work on my projects, I suppose.

It takes some haggling, and a significant Energy investment, but I manage to seal a deal to this effect. Over a thousand energy, and one Firaxite on loan, for ten Science per turn, for thirty turns. I have no idea if this is a good deal, but I like it. And it’s not like I’m wanting for Energy, anyway. I have a little over 2500 of the stuff. 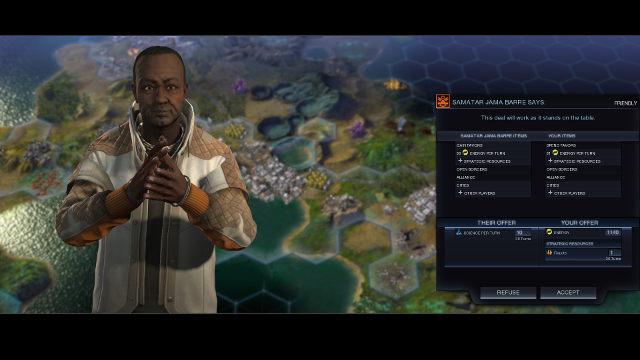 I’m happy, Samatar is happy. I don’t see how today could ever be better.

In fact, I’m so happy with this outcome, I call up Suzanne to make a similar, lighter deal. At the end of the day, my Energy stockpile is vastly diminished, but my Science output has increased to the point where the six-turn Computing study will now only take five turns. And if that’s not advancement, I don’t want to know what is.

Hey, remember earlier, somewhere around last episode, where I sent my Explorer to certain doom? And I joked about it ‘getting eaten by alien sea dragons’, fully confident in the knowledge that something like that would be overtly ridiculous even for this game? 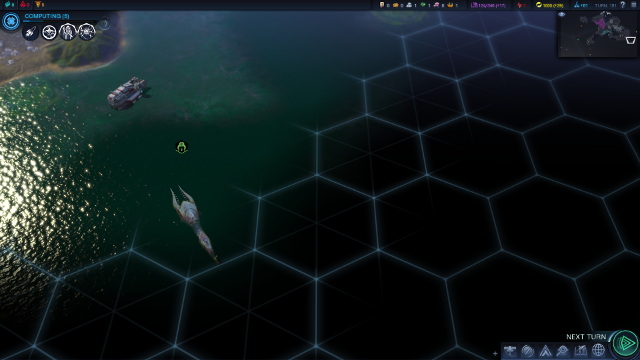 Pictured: me being wrong, *again*.

Surprisingly, the alien sea dragons — that’s actually what they’re called, ‘Sea Dragons’ — are pretty good sports about me sailing around their territory. As are the Drones and Raptor bugs on Alien Bridge. Both the land- and sea-bound tanks safely make it to the southern island, finding nice comfortable places each to settle down and not get eaten by giant bug monsters.

My plan is to have these tanks safeguard that part of the island that I’m most likely going to want to send a Colonist to in the near future. I’m not entirely sure yet, but so far, I find myself heavily leaning towards this little coastal area jam-packed with resources. 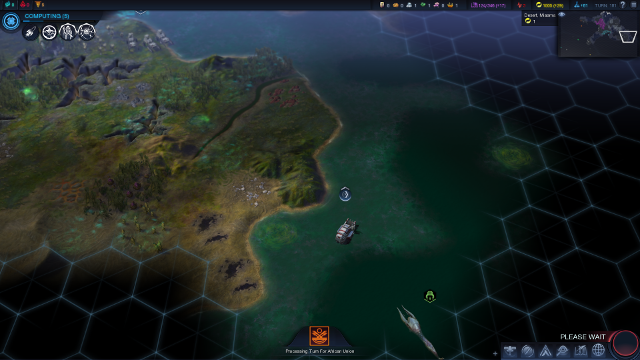 In fact, I think I’m gonna go ahead and queue up a Colonist in Aintza, the city closest to this particular frontier. Aintza will be working on its Petrochemical Plant for another week or so, but after that, I see no…

…Ho hum. Hello. What’s this, then? As I scroll over Aintza, I can’t help but notice the city looks… different. 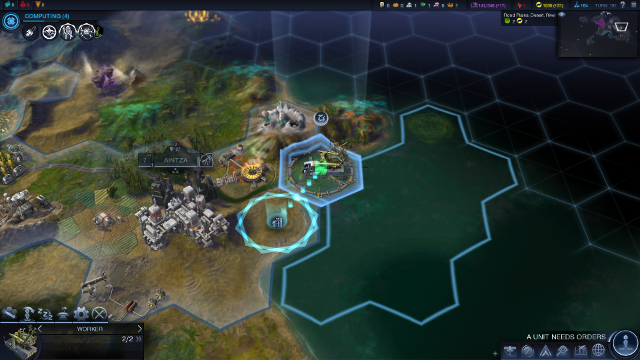 Huh. That’s… all my cities are looking this funky now. What in the devil?… 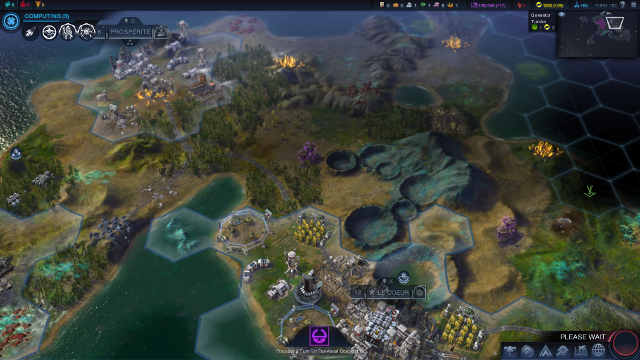 No, but seriously. What is going on all of a sudden? I’m not playing this confusion up: this literally happened over-turn.

I mean, whatever this is looks pretty rad, so I’m okay with it. I just wish I knew what is actually going on.

Anyway, we’ll figure this out later. For now, Fidèle has finally transitioned into a full-fledged Colony! 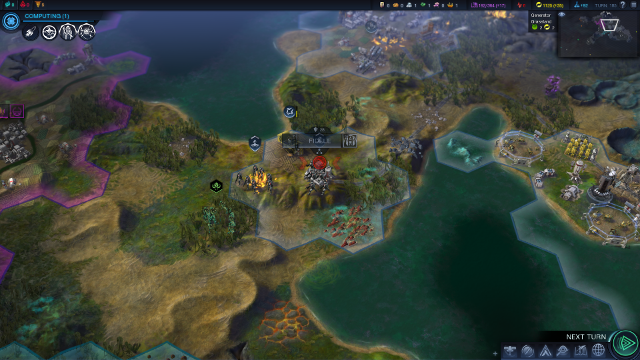 Oh, hey, looks. Le Coeur’s Intrigue Level has risen again. We’re at three diamonds out of five, now. I still don’t know exactly what that means, but it’s probably not great by any stretch. Good thing I just researched the technology that finally, belatedly, should allow me to get on equal footing with everyone else re: cool spy stuff! 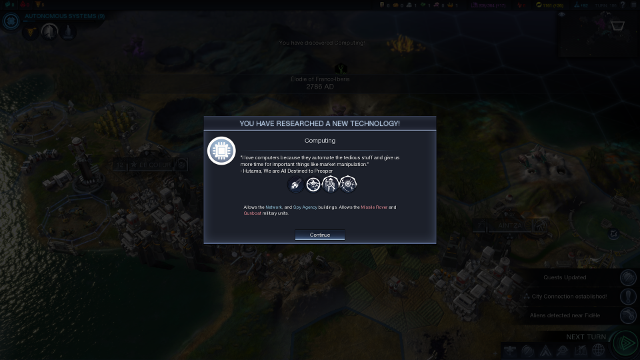 Took me long enough, too. Too bad I didn’t have any kind of way to… *steal* it off someone else, or something.

I move on to a Computing leaf technology, Autonomous Systems, because it has a cool wonder and a Supremacy point, before turning my attention to my new-found gains. Let’s see…

Alright. In order to get started on this espionage nonsense, I need to construct a Spy Agency in one of my cities. The Spy Agency is a National Wonder, one class below a World Wonder, meaning that every civilization can build one, but only one. So where should I… Le Coeur is currently pegging away at the Precog Project wonder, so that one’s right out. Fidèle is way too small, and it’s a frontier town, so that won’t work. Prospérité seems like a good candidate, given that it’s large, relatively safe from attack, and it just finished the Alien Preserve it was building…

…if it weren’t for the fact that I also just received a really cool and interesting-sounding quest specifically aimed at Prospérité. 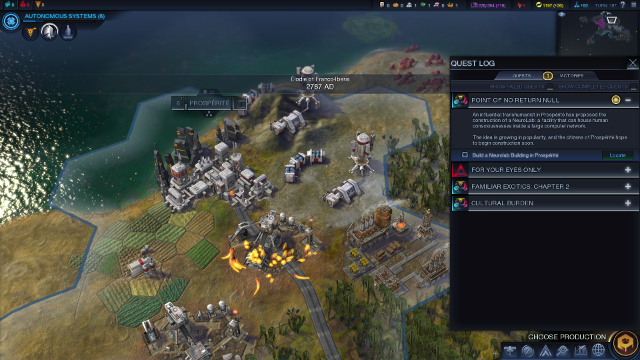 It genuinely sounds rad, so I’ll forgive the horrible pun.

Hmm. A NeuroLab, huh? My recent technological advancements into Cognition have unlocked this building for me to construct… and given that it requires a ‘workable, improved source of Firaxite’ nearby, I can see why the quest has selected Prospérité, the city built right next to my only deposit.

Apart from the nebulous quest goals, the NeuroLab is also a pretty cool building in and by itself, boosting Science gains from Firaxite deposits by 1 and all-around city Science gain by 10%. So alright, ‘influential transhumanist’, you got yourself a deal!

That leaves Aintza as the sole city I can reasonably build the Spy Agency in, then, doesn’t it? After the Petrochemical Plant is completed — sadly not updating the Familiar Exotics quest, so scratch that one off the ‘possible to ever complete’ list — I queue up the Agency for immediate construction.

Then, I remember what I was actually doing, and I push the Spy Agency down the queue to make room for a Colonist. Expansion first, espionage later, remember? Those tanks are only gonna be able to hold on to Southern Island’s prime Petroleum spot for so long. 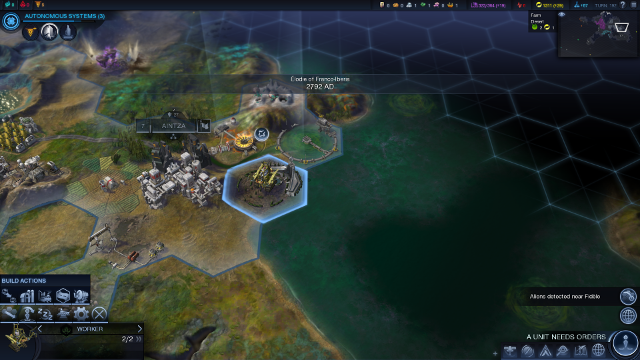 As you can see, I also built an Academy near Aintza. No reason, I just wanted to see how it looked. 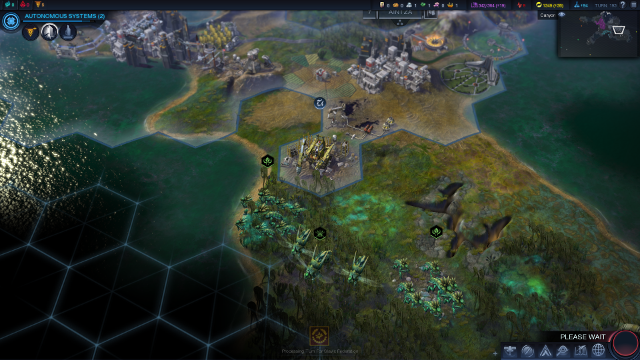 And while this screenshot has no real influence on the narrative, I still found it cool enough to show. I call it ‘the tangible effects of the Ultrasonic Fence on general Worker survivability’.

Interestingly, finishing the Computing study has one additional effect. This technology unlocks access to two new units: the Missile Rover, which is to the Armor what Rangers are to Marines, and the Gunboat, my first dedicated naval unit. And because of my relatively high general Affinity level, I immediately have the chops necessary to upgrade them…

…but the actual upgrade popup doesn’t show up until two turns after Computing is completed. 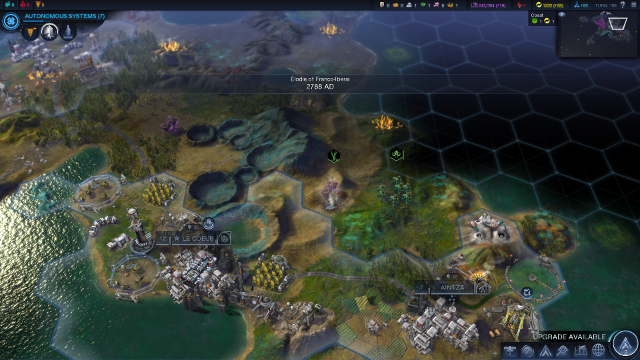 Weird as delayed upgrades are, they’re still upgrades. So, hey, whatever. I improve my Missile Rover into Artillery, granting them +40% damage when attacking cities, and turn the doofy-looking Gunboat into a sleek Cruiser, figuring what it really needs is a +20% damage against land units. 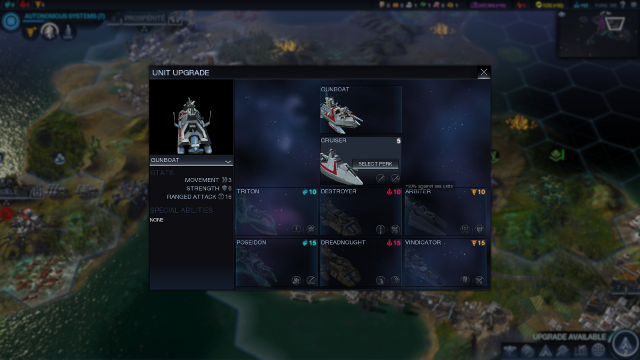 Tell me that Gunboat doesn’t look doofy as all hell.

And hey, speaking of upgrades…

The Autonomous Systems study is not particularly long. Maybe it’s my newly-boosted Science output, but I burn through this topic in under ten turns. Doing so grants me three cool things: the Node, a combat-oriented Worker improvement that heals nearby units, the Master Control wonder, which boosts Culture and unit movement…

…and a Supremacy point. My sixth Supremacy point, in fact. Which means that I can now upgrade another two units. My general Affinity level of six means my Tacjets turn into Needlejets, like this: 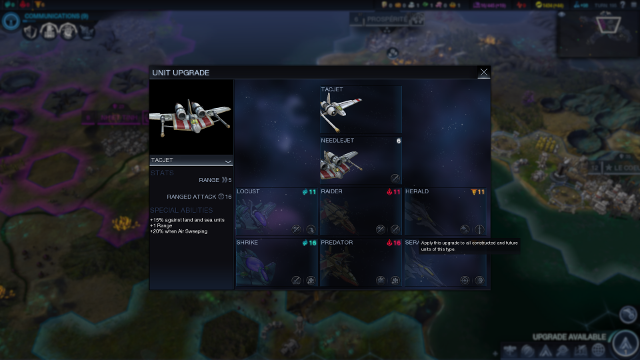 Is it just me, or do Needlejets *kinda* look like two Tacjets stapled together? 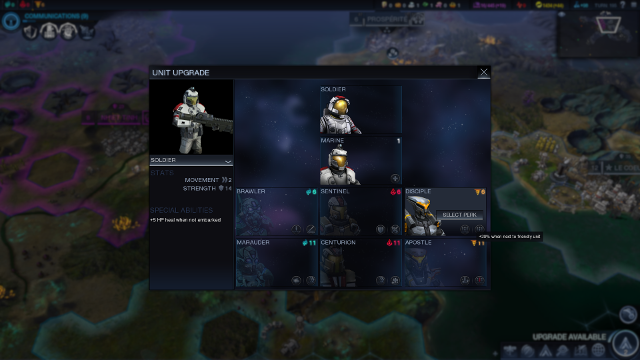 Marines to Sentinels: basically the same unit, just with more armor and weapons strapped to it. Marines to Disciples: recognizable as the same shape, but essentially a robot now. Marines to Brawlers: *HOLY CHRIST WHAT THE HELL HAPPENED*

Man, Disciples. I’m liking these guys already. The upgrade grants them a flat +10 Combat Strength bonus, taking them up from 14 to an impressive 24. Their new selection of perks is nothing to scoff at, either: the options are either ‘+8% Combat Strength for every adjacent friendly unit’ or ‘+20% Combat Strength when next to at least one friendly unit’. I pick the latter, given that that one’s better in all scenarios where this guy isn’t absolutely surrounded by friends.

And, maybe more importantly, the upgraded Disciples look rad as hell. Look at ’em! All black and yellow, sleek and angular. I get why Supremacy is called Supremacy, now. Who could look at these soldiers and not be awed by their obvious superiority to weak, flawed, fleshy humans?

More to the point, though, the Disciple visual upgrade finally helps me realize what’s been happening to my cities throughout this episode. It really becomes immediately clear once you put the two together: 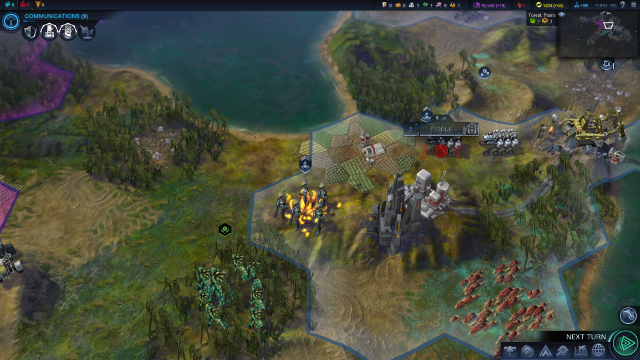 I honestly can’t believe I didn’t grasp this earlier.

My units aren’t the only one influenced by my transhumanist path: my dedication to the Supremacy ideology is pervading every aspect of my civilization, up to and including city design. Like my soldiers, my citizens are leaving behind the flawed architecture of Old Earth’s past to move towards the glorious evolution of the future.

I’m entirely okay with this.