After the introduction and setup of day 0, Go Go Nippon does actually start cleaving a little closer to its purported ‘digital guide book’ approach. The way it works is that on day 1, you’re given a list of six Tokyo areas that you can visit. Like so: 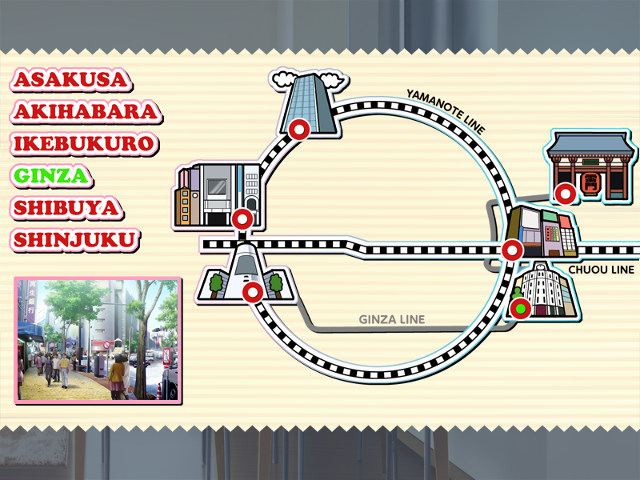 No other parts of Tokyo ever matter.

You select one spot, and that’s the place you’re going for the day. Either Akira or Makoto accompanies you, depending on where you go. 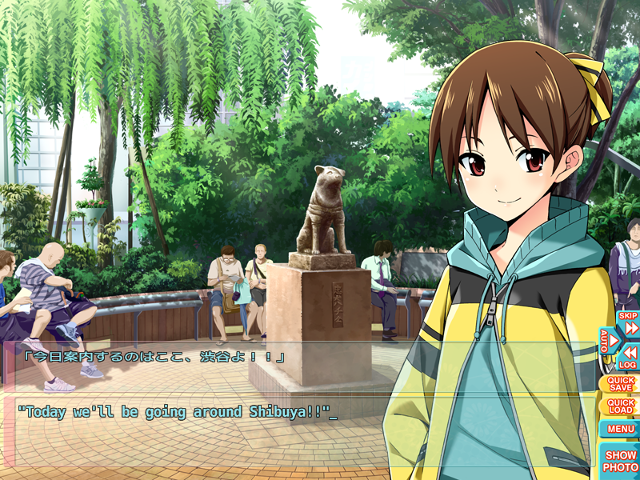 These day trips are, for the most part, trivia and information dumps disguised as a nerd running around Japan. For those of you actually interested in learning odds and ends about Japan, this game might actually be very interesting? I mean, it’s nothing you couldn’t pick up somewhere else, anywhere else, but still. All information is presented very matter-of-factly, but in an easily readable and digestible style, so it’s not unlikely you can really pick stuff up.

Go Go Nippon is so committed to giving you an impression of Japan, in fact, that it’s not content with just showing you pretty anime pictures of what Tokyo somewhat looks like. While the rest of its HUD is pretty straightforward for visual novels — save, load, quicksave, quickload, skip text, scroll back up to read old text, you get the idea — certain areas also sport a big honking ‘Show Photo’ button. Clicking that button opens up an honest-to-goodness Google Maps Streetview tab in your browser of choice, centered on the area of Tokyo you were just looking at.

And the drawings and photos tend to look quite alike, too! So, for instance, this is a drawing of Shibuya’s famous crossing… 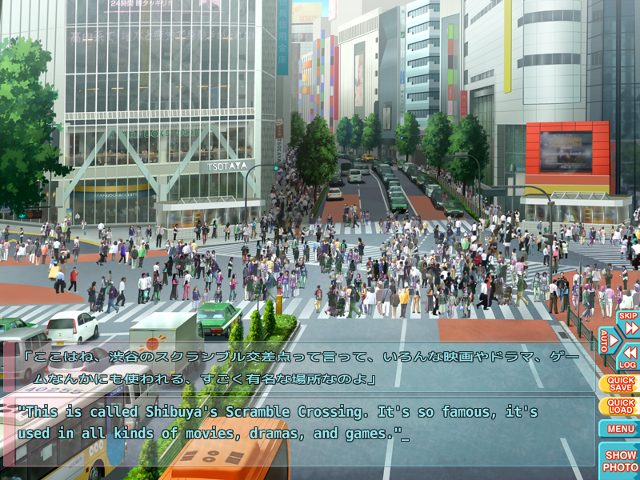 Yeah, I went to Shibuya first because of The World Ends With You. What of it?

…and this link is what the Show Photo button leads to.

Every area has like three or four different information vignettes. Go to Shibuya, for example, and you can learn about the dog statue, the scramble crossing, the Meiji shrine, and the ganguro subculture. Stuff like this makes up about 80% of every area visit; the remaining 20% is dedicated to bantering with whichever sister is accompanying you. And when I say ‘bantering’, I mean ‘them obviously being super in love with you, and you being incredibly oblivious to that’. 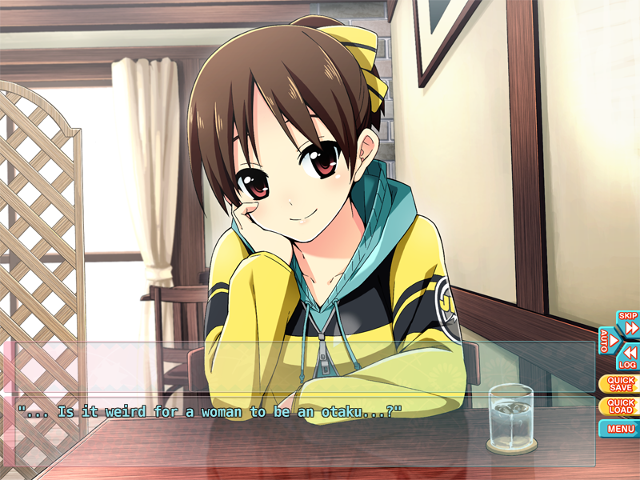 The area visit vignettes are tied together by the hub world of the Misaki house, which is more of a comedy central location than anything else. Expect jokes centered on Makoto being bad at cooking, Akira being angry at things, and Protagonist being confused and baffled by such Japanese intricacies as highly advanced toilets.

Gameplay-wise, there’s very little to these sections but clicking and reading. This applies to all of Go Go Nippon, honestly. There are one or two meaningless choices throughout the whole of it, usually related to eating food. Do you want to see drawings of sushi, or of Japanese pizza? 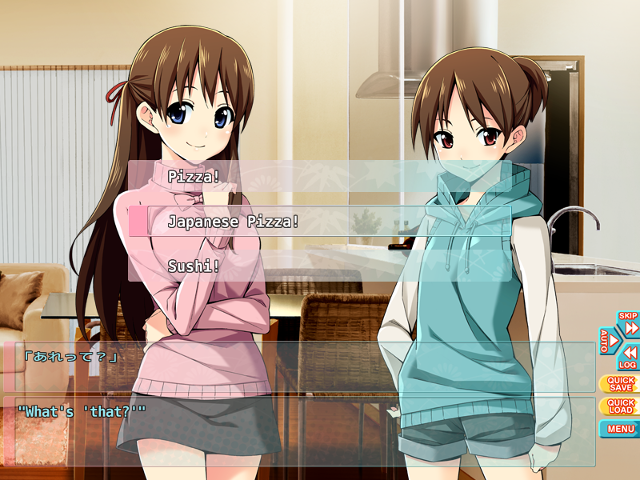 Or regular pizza, if you’re some kind of contemptible asshole.

Even though the area list sports six choices, and you have six days to spend in Japan, you actually only end up visiting three of them. Days 4 and 5 are spent on a mandatory trip to Kyoto, for more cultural learnings about Japan, cool shots of Mount Fuji, and your protagonist spazzing out about trains. Finally, day 6 is dedicated to a special trip with the sister you previously spent the most time with, during which you and she come to terms with and openly express your love for one another.

There is no avoiding this outcome. 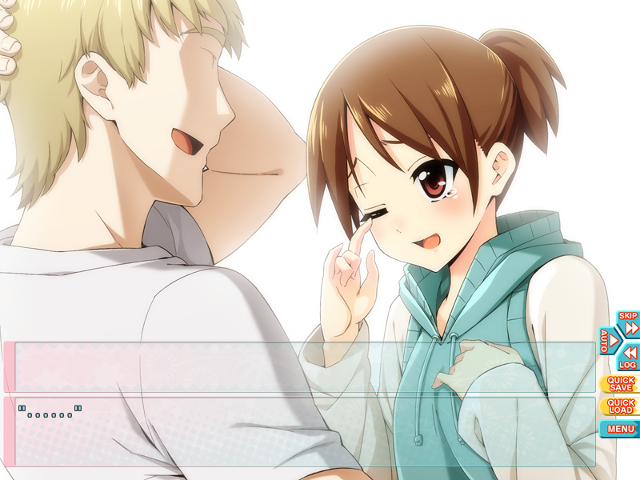 I should know, I tried.

And, er… that’s it. Tokyo, Tokyo, Tokyo, Kyoto, Kyoto, Tokyo, undying love, roll credits. Secret after-credits string where you return to Japan to be with the girl you love, and also because Japan is so amazing and all that.

And… I’m pretty down with it?

I find I’m much more positively oriented towards Go Go Nippon than I initially thought I would be. As far as mostly-kinetic visual novels go, I enjoy the change of pace that Go Go Nippon’s learning-about-Japan approach provides over all my previous dramatic-sweeping-character-arc fare. And I respect its dedication to its guidebook-to-Japan format, which extends quite a ways beyond mere formality. The game is jam-packed with information, both textual and visual, and a lot of it — like the introduction’s SUICA segment — is aimed not just at marveling at Japan, but at actually giving a tourist the behavioral handholds they’d need to get by in Tokyo. I’d have loved to play a game like this before I went to Paris, for instance!

There’s text, there’s photos, there’s guidelines. The areas you visit are summarized in the menu-reachable ‘sightseeing album’, which reads like Protago-Guy’s reflection on his trip. 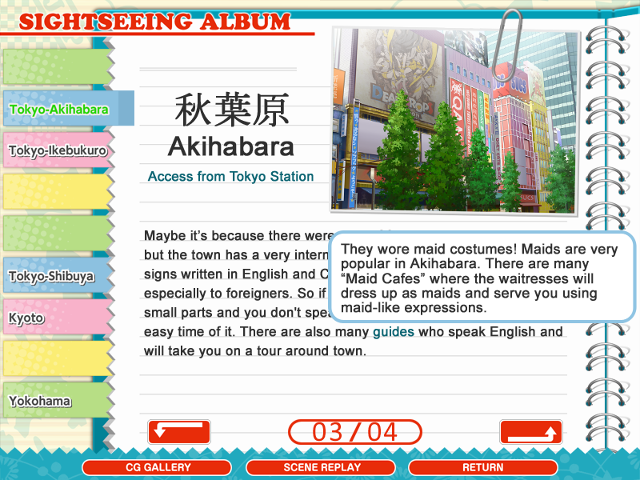 It’s a book, but also a hypertext document. Because Japan.

And one thing I haven’t mentioned at all is that, whenever your game character spends money on anything, that money amount is displayed in the upper right corner. In the currency you chose at the beginning of the game. Yeah, turns out that’s what the exchange rate was for. 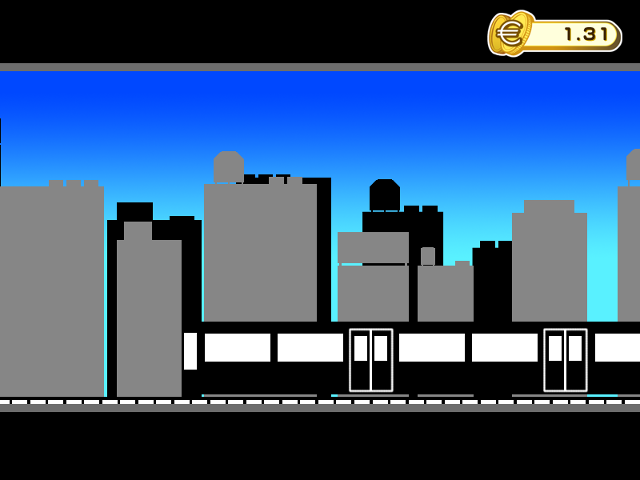 Thanks to this handy-dandy popup, I can now parse that this train ride is Not Very Expensive.

You can even see a running tally of your expenses in the in-game side menu. It’s a little pointless, given that these are Protago-Guy’s expenses based on a single trip every day, and absolutely no costs accounted for hotel expenses and the like. But still.

As a digital travel guide, Go Go Nippon is at the very least an interesting exploration of what this technology can do, as well as a fun collection of factoids and guidelines. As a visual novel romance story, it’s… slightly less amazing, I guess? Still fun, but a little hackneyed. It’s wish fulfillment to the n-th degree: ‘you’ ‘finally’ manage to visit Japan, only to find out you’re staying with two beautiful teenage girls and nobody else. And while they’re both obviously smitten with you, the story always works itself out in such a way that one of them totally falls for you, while the other one is just okay with that development. No awkward fights and weird romantic under-tensions, just clean wholesome Love Forever. It even does that same thing Sakura Spirit does, where romantic and sexual thoughts are written off as dirty and evil, right up until the point where it’s clear the object of your affections feels the same way.

Well. I say ‘clean and wholesome’, but there’s a reason this game has a Nudity tag on Steam. It shouldn’t have, honestly: what little nudity is in this game — two scenes — feels horribly contrived and weirdly out-of-place. Not to mention unbalanced! You ‘get’ to see each sister in a compromising position once — ha ha, don’t think you can avoid this! — but while Akira’s scene is little more than a little embarrassing for everyone involved… 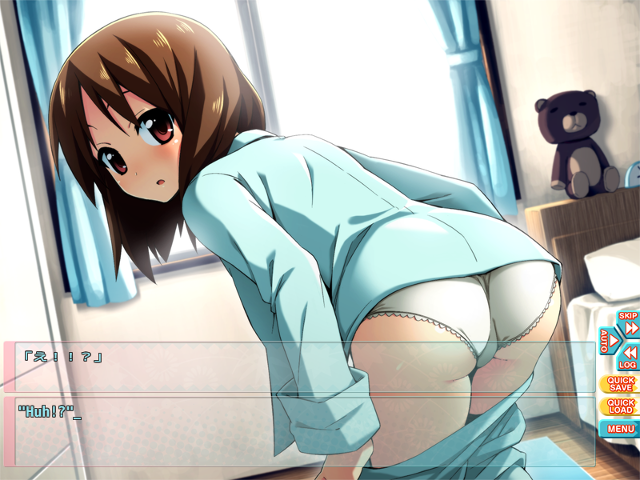 …Makoto’s scene marks only the second-ever time I’m actually not totally comfortable showing the associated image on full display here on Ninja Blues. Find the image behind this link, if you dare.

I mean, far be it for me to complain about free naked women. All for ’em, big fan. But the inclusion of particularly the Makoto image does hurt Go Go Nippon more than anything else. I’d be more than happy to recommend Go Go Nippon as, like, a learn-about-Japan study guide for kids, the way it’s drawn and written and structured. Seems like it’d be really good for that! Except that about twenty percent of the way in, you’re going to have a possibly uncomfortable conversation with the kid in question about why that one lady’s breasts are the size of her head, and why she doesn’t lock the bathroom door while showering.

Final realization with regard to Go Go Nippon: why doesn’t our protagonist have eyes? 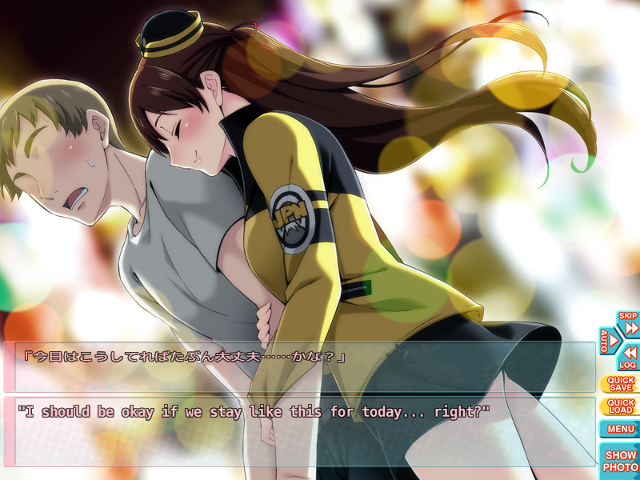 You may think I’m cherry-picking here, but I’m really not. He never has any. 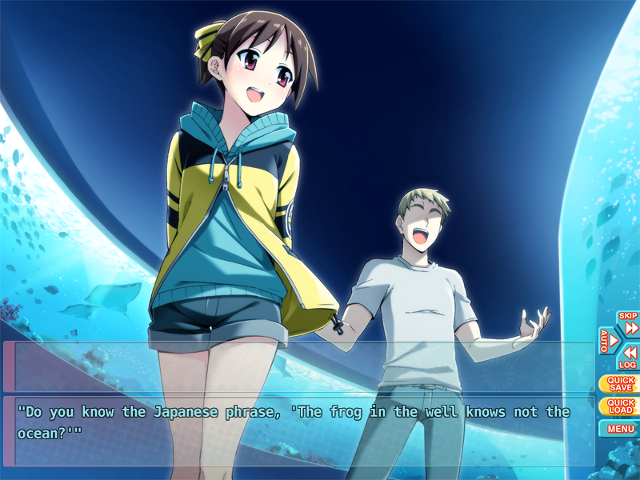 “It means WHERE ARE YOUR GODDAMN EYES?”

Go! Go! Nippon! ~My First Trip To Japan~ is a combination handy Japan guidebook and cute inoffensive love story, wrapped in a prettily-drawn and nice-sounding bundle of game and burdened down with one unnecessary helping of T and one helping of A. There is honestly some pretty good writing in there, particularly with regard to how the two sisters view each other. ‘She’s so perfect, I suck’, ‘She’s she free-spirited, I always do what other want’, that sort of thing. Nothing earth-shaking, but it’s a good read if nothing else.

If you’ve always wanted a repository of Japan Facts in your Steam library, the base game is nine bucks on Steam — or should I say, 1320 yen — though it’s ‘currently’, time-of-writing, discounted to €3.60. I don’t know if I would recommend it to anyone, but it’s short, sweet, to the point, and I could think of worse ways to burn a few hours than to look at pretty pictures of Tokyo.

Jarenth is now and forever the true King of Tokyo, no matter what the giant monsters claim. To celebrate his reign, follow him on Twitter or hang out with him on Steam.