Woof. Lemme tell you something, readers: these visual novels and dating sims are getting to me. I’ve been doing this VNADS nonsense for, how long, two months now? Two and a half? And I haven’t even scratched the tip of the iceberg for what’s available. Hell, I haven’t even started scratching the tip of the iceberg. I’ve been taking loose-lying pieces of ice for handy-dandy drink refreshment and patting myself on the back for bravely diving into the weird and wonderful world of visual novels.

I need to wrap up the VNADS experiment soon. At least for this year. I’ve been letting so many interesting indie games pass by simply because they weren’t visual novels! It’s honestly driving me a little mad. Plus, I think I might be starting to parse my real-life conversations in visual novel terms? I’ll probably revisit this idea again, next year — maybe as an annual autumn celebration of sorts? For now, you get this week’s article, then I’m taking next week off for Christmas purposes, and then one to close out the old year and lead in the new. I even have just the game picked out, too. Don’t worry, you’ll love it.

As for this week: don’t ask me how I decided on Go! Go! Nippon! ~My First Trip To Japan~ (Go Go Nippon from here on out). If you have to ask, you’ll never really understand the answer. Look at it! It bills itself as sort of an animated guide book to visiting Japan… except it’s also a romance-driven visual novel? And the Steam tag ‘Nudity’ promises some great things as well. I have zero idea how easy-to-write-about this game’ll end up being, but I assume you all understand that I have to find out.

(Spoiler levels: Narrative, somewhat high, for those parts of it that can meaningfully be spoiled. Mechanical, still a visual novel!.)

…Welp. Go Go Nippon manages to open on something of a sour note: while the colourful and cheer-tuned opening screen definitely puts me in a good mood, and while the Options screen isn’t half bad as far as visual novel options are concerned… 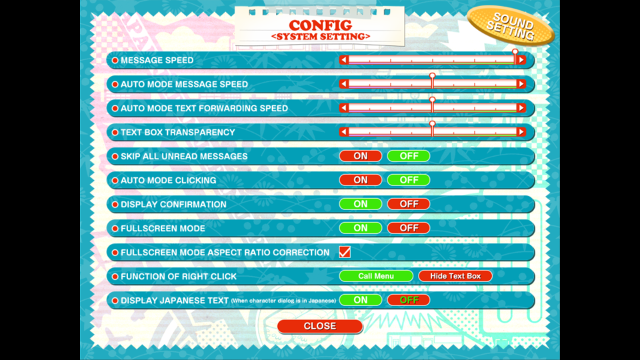 Though it took me a little while to figure out whether red or green meant something was selected.

…putting Go Go Nippon in full-screen mode breaks it for me. Mechanically breaks it: in full-screen Go Go Nippon, I find myself no longer allowed to enter any information when prompted, and changes I make in the options only casually, reluctantly appear on-screen. Guess I’m stuck playing this one in Windowed Mode, then. It’s not a big thing by any stretch, but you know what they say about first impressions.

On the upside, the way Go Go Nippon is structured makes it impossible to not run into this game-breaking problem immediately. Starting a new game immediately prompt you to enter your character’s name, the letters for which remain stubbornly invisible in full-screen mode. So unless you’re comfortable being called Blanky McBlank-Blank by everyone you meet… actually, you still wouldn’t be out of the woods, as Go Go Nippon requests as a secondary input… the current currency exchange rate for either dollars to yen or euros to yen? 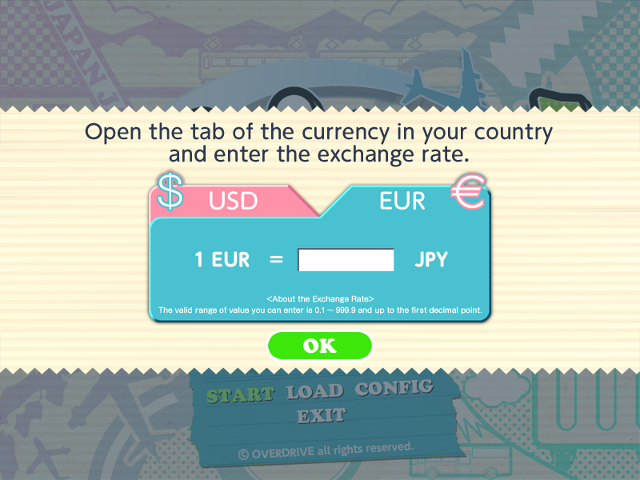 On my honour. I wouldn’t make this stuff up.

I’m guessing this game is really committed to the whole ‘Japan trip guidebook’ conceit, huh? More power to them if they can actually pull it off, obviously. I quickly run into the issue that you can only specify the exchange rate up to one decimal point, which is not what Google is telling me the Yen is currently doing. But fine, whatever, I’ll round it up.

Yeah, sighing in an airplane! 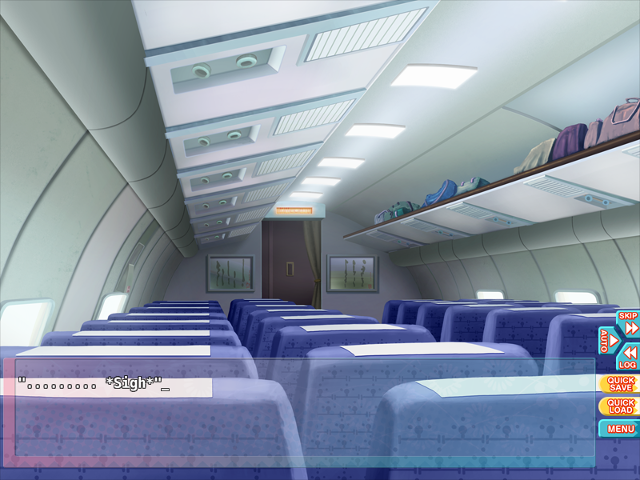 Wait, shit, hold on, an airplane? You fool! Don’t you watch movies? Everything can go wrong on airplanes! Snakes, cabin pressure, Liam Neeson. What are the emergency game saving exits on this thing like? 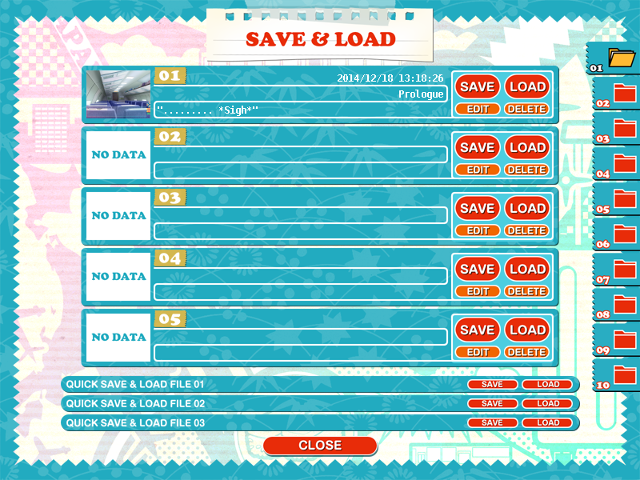 Dumb jokes aside (for now): Go Go Nippon starts with out protagonist, me, on a plane controlled-plummeting into Tokyo. Protago-Jarenth is pretty hype about this: “My dream is finally coming true! I’d planned to sleep on the plane so I have plenty of energy… but I haven’t felt tired this whole time!” 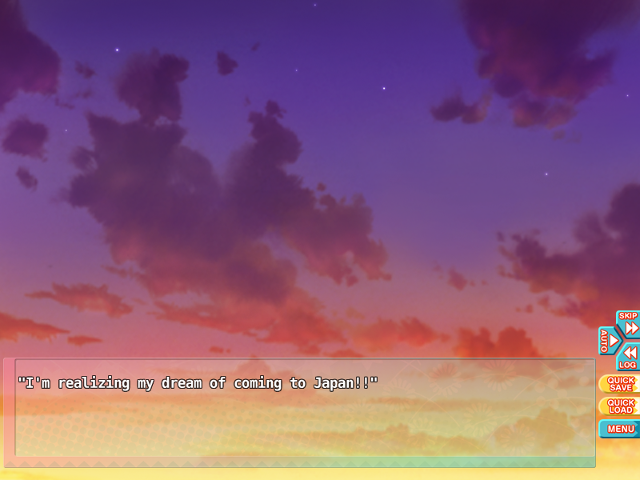 Protago-Jarenth is *really* excited about coming to Japan, you guys.

Go Go Jarenth lands in Japan. Immediately, his very first thought is “I must be in Japan!”. 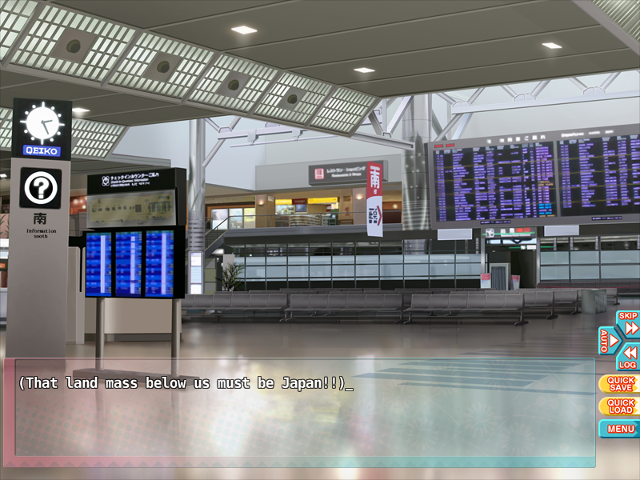 This version of Jarenth is not the sharpest tool in the shed, is basically what I’m getting at.

Our dumbstruck hero rambles about Japan for a couple more text blocks, highlighting just how amazingly happy he is that all his hard work and study have brought him to the magical wonderland that is Japan. Christ, dude, we get it. Calm down already! My Jewish friend wasn’t this excited when he told me about the first time he visited Israel, and that is literally holy land to him. Don’t cream your pants over the goddamn airport.

Speaking of pants-creaming: in a swift change of topic, Protago-Jarenth starts monologuing about how he’s supposed to meet up with his two Japanese friends, Makoto and Akira. He’s arranged to stay at their house for a week, so, good on you for being cost-efficient!

Now, our hero talks about his two internet friends as being two brothers… 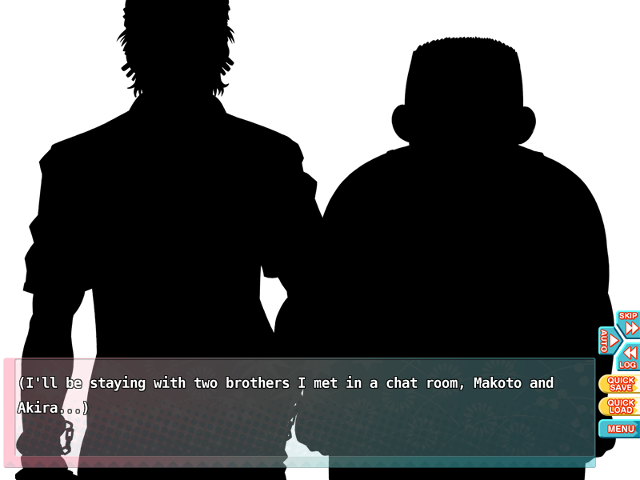 …that he has only a vague visual impression of, apparently…

…but come on. Come on. Even if I hadn’t seen any screenshots for this game, I’d know that this isn’t what’s gonna happen. This is a Japanese visual novel slash dating sim! Of course the two people whose house I’m spending one week in aren’t cool, buff, burly brothers, but two conventionally attractive teenage girls. 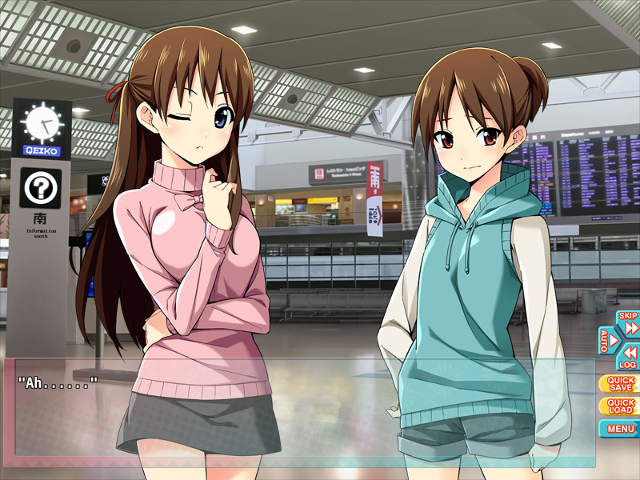 With non-rainbow hair, surprisingly. This game is more dedicated to its air of realism than I thought.

I’m gonna romance at least one of them, aren’t I? Sweeping prediction.

I meet my friends, the sisters Makoto and Akira, who despite being close enough to me to have offered me a stay in their house on my Japan-trip never ever figured it’d be a good idea to let me know what they look like. Which… okay, I’m actually in no position to joke around here: I hung out with Josh of Spoiler Warning fame in Las Vegas for a week, and I only found out what he actually looks like when he picked me up from the airport. And alright, fair enough, I guess I can see that ‘Makoto’ and ‘Akira’ work as male names more than female ones.

You guys seriously never hopped on voice chat, though? Not even Skype?

Unlike Sakura Spirit’s Gus, Nippo-Tagonist is at least a little quicker on the uptake with regard to the implications. 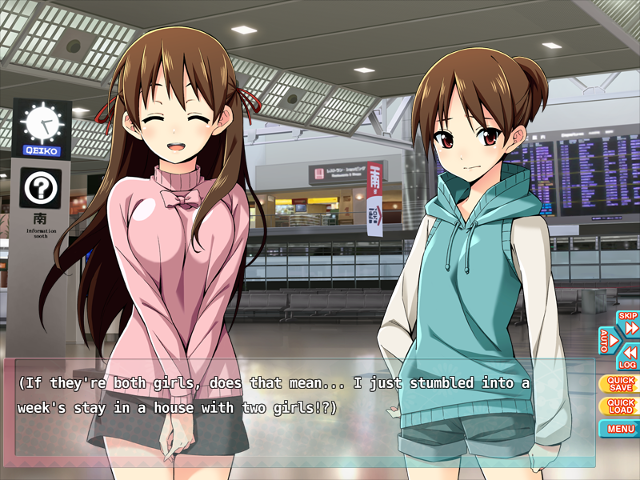 It is later revealed that these two teen girls are home alone for the week because their parents ‘had to leave real quick’. This is not a joke.

I meet Makoto and Akira. Makoto speaks flawless English, which is apparently the language we used in our ‘chat room’. Akira… less so. It’s almost endearing to struggle through her phonetic English massacre. 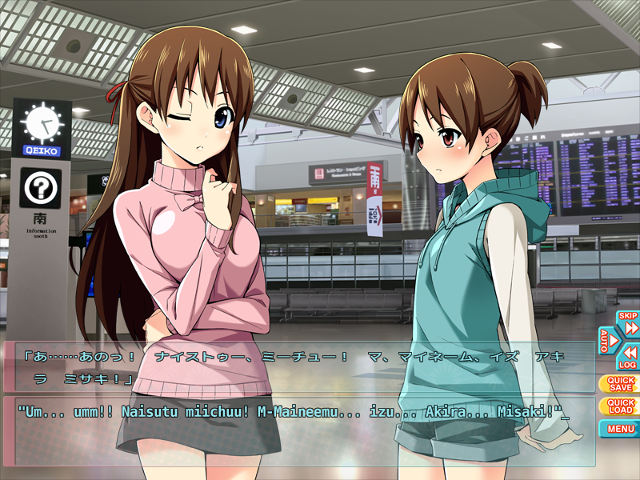 It works if you read it out loud.

Because Akira’s English is such a horrible mess, the decision is made to switch to Japanese for the rest of the trip. Even though Japanese is a notoriously difficult language to learn for outsiders, Rising Sun Jarenth speaks it flawlessly, so it all works out!

As a courtesy to me, uneducated gaijin supreme, Go Go Nippon provides the courtesy of displaying all text boxes both in Japanese and English. As a study aid, maybe? They’re also neatly colour-coded: pink for Makoto, blue for Akira, white for me.

Alright! Let’s get to the house I’ll be staying it. I am beat from this flight.

…But wait! Makoto and Akira’s house is in Tokyo proper, and that’s not where we are yet. You see… 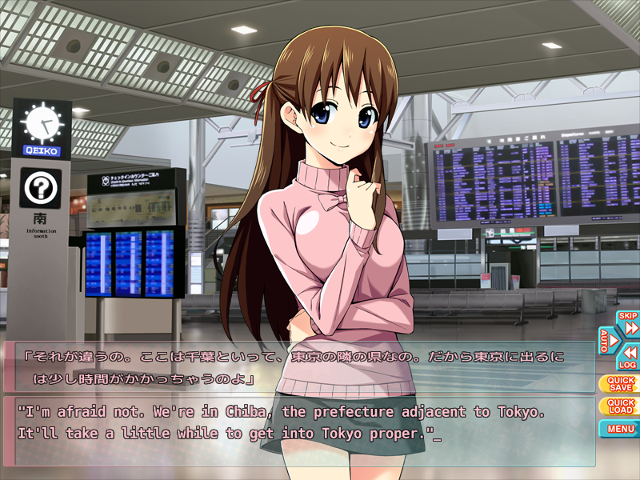 Looks like the trip lessons are already beginning, huh?

Yup, looks like: the next two dozen text boxes are dedicated to Tokyo’s public transport fare card, the SUICA. 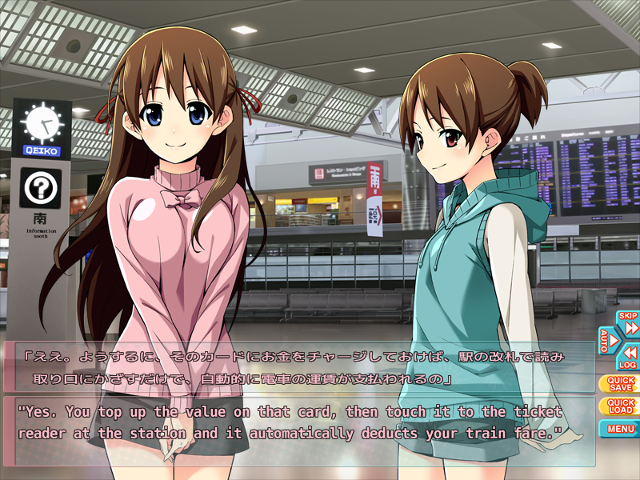 And I mean *dedicated to*. It’s basically a step-by-step guide.

I’m not all that into this technical talk, but protagonist-Jarenth is going bananas over it. He’s gawking over every little thing. Wow, you can check into a train with a card? And you don’t even have to take it out of your wallet? Wow, these train stations are so big! And they have shops and restaurants and stuff! Wow, this train station has up to 14 lines!

Wow, Japan has convenience stores that are open 24 hours a day? Wow, you can get food and utilities whenever you want! Wow, vending machines! 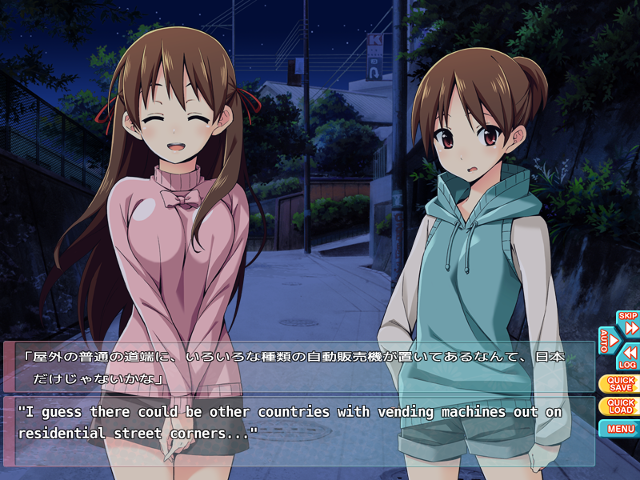 At first, Jarenth Of The Orient’s breathless adoration and enthusiasm is confusing to me more than anything else. I mostly find myself wondering… where did this guy come from, that he’s equally amazed by everything ever? The currency exchange info seems to suggest your character can be either from America or from Europe. But if this Jarenth is from Europe, like I am, why is he so a-gog about Tokyo’s train station? Sure, it’s big and all, but it’s not like I haven’t seen this sort of thing before in real life. Amsterdam, Rotterdam, Utrecht, Schiphol, King’s Cross, Köln Hauptbahnhof, Paris Nord, Wien Westbahnhof… large train stations and shopping centers all, and that’s only the ones I’ve been myself. And NFC-enabled public transit chip cards aren’t exactly techno-wizardry for us, either. And okay, maybe that total surprise would make more sense if your character is canonically from the US… but then how could he ever be surprised by 24-7 convenience stores? Last I checked, 7-11s were open all day. Where is this guy from, that everything is earth-shaking for him? 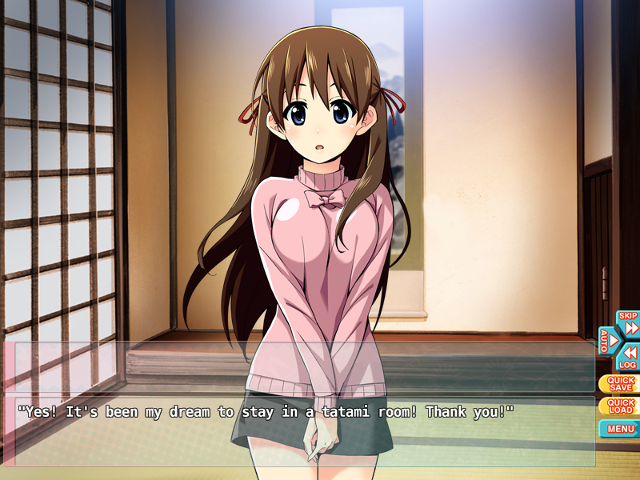 And thus ends day zero of Japan Jarenth’s visit to Japan. As the counter rolls over to day 1, I’m left wondering what will be next in store for me. Will I see and learn about cool parts of Japan? Will my main character get more chances to spaz out like a total nerd? Will an awkward romance subplot be shoehorned into this digital guidebook? Will gratuitous nudity appear more or less out of nowhere?