You know what? Sometimes, you just gotta go by instinct. A few weeks ago, in the comments section for that most inspiring of visual novels (Sakura Spirit), a commenter by the name of Pawel (345) mentioned that if I was ever in the market for non-awful visual novels, I could try… well, it was a whole list, but the thing that stuck out is the two particular games mentioned that were on Steam: WORLD END ECONOMiCA, and Hatoful Boyfriend.

Sometimes, you just gotta go by instinct. WORLD END ECONOMiCA, developed by Spicy Tails and brought to Steam through the Kickstarted efforts of Sekai Project, being mentioned in the same breath as Hatoful Boyfriend, a game that I unreservedly recommend to anyone ever? I’m not incredibly superstitious, but it seems to me that sort of thing might mean something.

Ooh, look at this fancy opening. No title screen proudly displaying the female characters’ impressive range of hair colours for WORLD END ECONOMiCA: apparently, the most important thing to convey at the very start of this game is that it takes place in space. 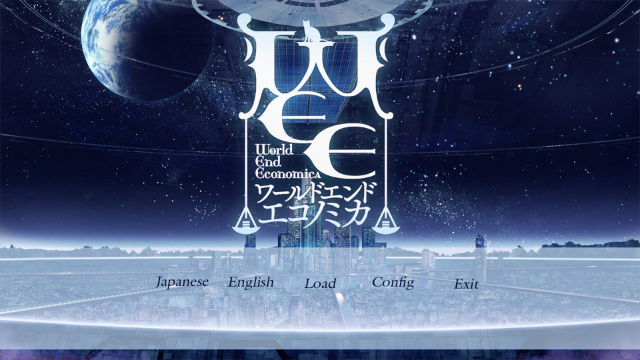 On a bright-lights metropolis some distance away from Earth, at least.

That said, there are two noteworthy things about this particular Options iteration: 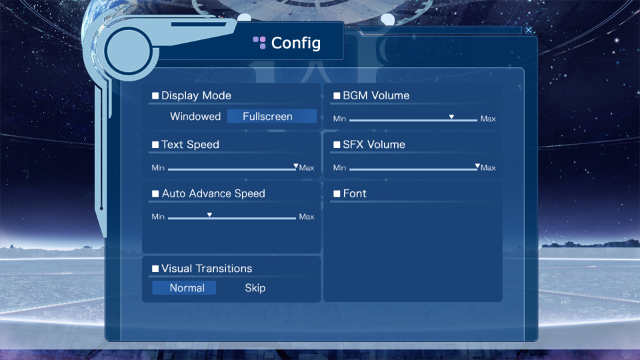 Three if you count the impressive blueness.

First, that background music slider is deceptive. You’d figure that, a slider like that, the two endpoints represent significantly different levels. 100% Max Volume on the right, Whisper Whisper Almost No Volume on the left. But therein lies the deception: moving WORLD END ECONOMiCA’s BGM slider to one-step-before-mute still makes it pretty loud. The slider makes a difference, but it’s the difference between loudly yelling and speaking at brisk volume, not the difference between a whisper and a roar. I end up having to mess with the Windows Volume Mixer to get it low enough, relative to other programs, to be comfortable.

And second, how do you exit this screen? Readers, look at that screenshot again. Any guesses? Pressing Escape doesn’t work, clicking the right mouse button doesn’t work, arrow keys don’t work. Yelling at the screen doesn’t work. For a period of time just not exceeding two minutes, I’m entirely stuck on this screen, pondering whether or not I should Alt-F4 out of it and hope my settings get saved that way. Only then do I notice the tiny, off-corner cross button in the top right. 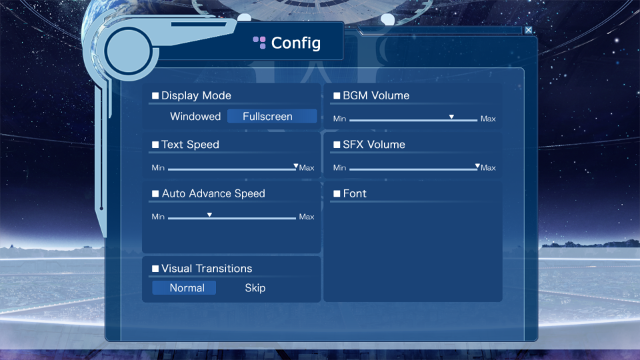 Here’s that screen again, with the exit button highlighted.

Beyond that, I got nothing to talk about. All that’s left on this title screen is ways to start the game proper, which I guess I’m about to do next. I appreciate the presence of the ‘play in Japanese’ and ‘play in English’ options, but there’s a small issue with me not actually understanding any Japanese. So for me, those are less comparable options and more ‘either play a game you understand, or play a game you don’t’. Which… could be funny in its own right, honestly! But not today. Today, I’m making an effort to actually find out what in the devil ‘WORLD END ECONOMiCA’ even means. 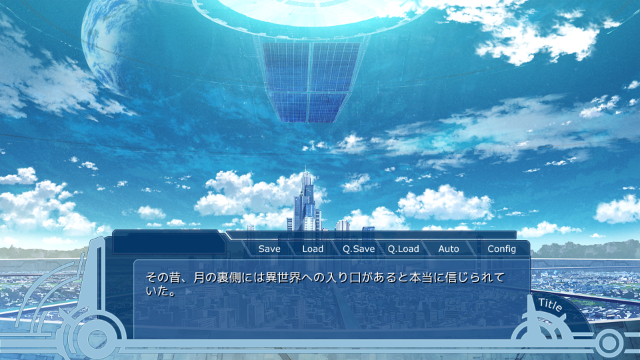 Is… is this explaining it? Is this saying *anything* of value?

“In the past, people really believed there was a doorway to an alternate world on the dark side of the Moon.” 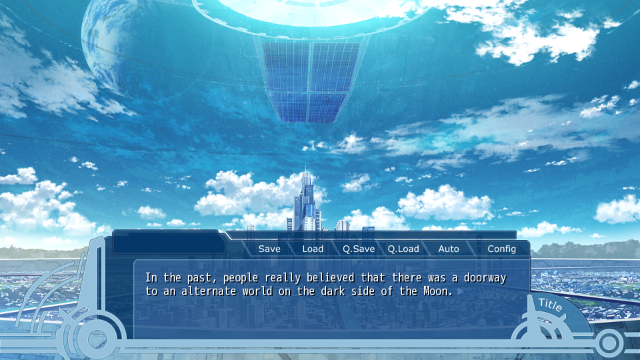 Orchestral music in the background, different from the electro-beeps in the title menu. As I look at a slightly brighter version of the title screen graphic, including mountains and houses and cities and a sky-view of the Earth through some sort of dome, the unvoiced text boxes keep babbling about mysteries on the Moon. The Moon was all mapped out, you guys, and it turns out there weren’t any really cool mysteries there, either! This makes our assumed-protagonist sad. This makes our assumed-protagonist so sad that only an actual visit to the Moon can cheer them up a little. 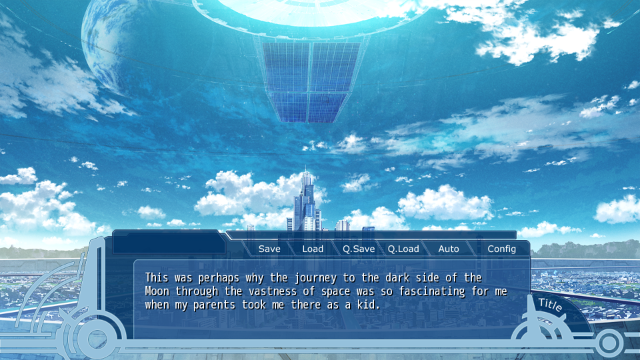 This person has expensive tastes.

Visiting the dark side of the Moon made protago-person realize that they would really like to live like Star Trek, and boldly go where no-one has gone before. This impression was made so strongly, in fact, that their entire life from that point onward was dedicated towards the singular goal of ‘being somewhere the first’. Where, exactly? Doesn’t matter! All that matters is the flag, the first post, those first footprints in the dust before some other jackass tracks his dumb Uggs all over it. 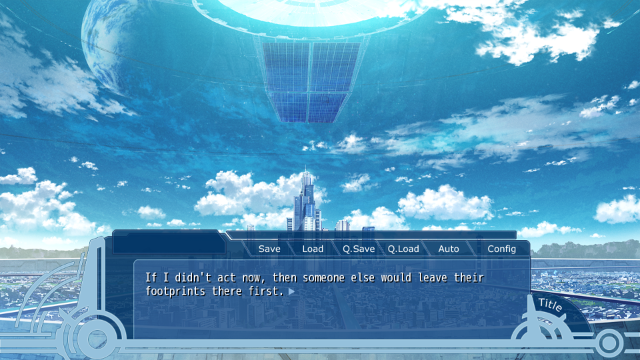 Talking, talking, talking. Still more about this exploration dream, about new frontiers, about footprints in the Sea of Tranquility. Wow, this thing is really important to this dude?

Then, suddenly! Flash of light. The screen fades to white, fades to black. The music changes. Protagonist stops talking about their desires to visit the unvisited, and instead talks about… their laptop. 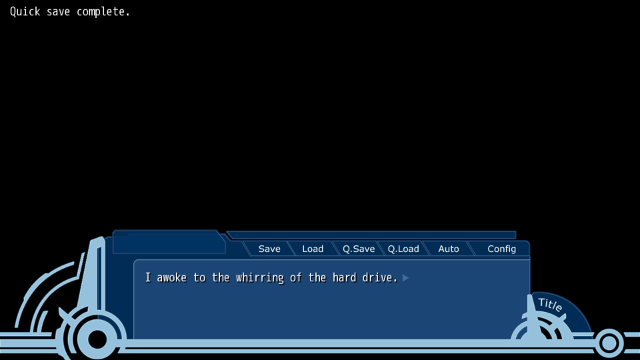 …getting interrupted by this sweet dude: 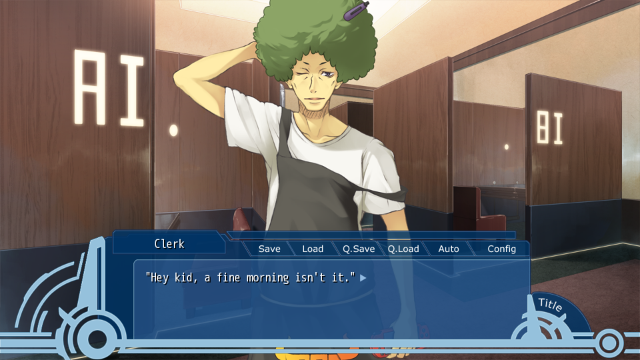 Hand-drawn guy with yellow skin and green afro, what’s up! Have you come to save me from this establishing prologue? Are you here to take me on the adventures I so vividly dream of? Is there a hoverboard hidden in your hair?

Alas, no. Afro-guy’s sole purpose seems to be to elicit yet more background monologue from our protagonist. Who, incidentally, is called Yoshiharu Kawaura, so see if you can guess what my nickname for him is going to be!

Yoshi was born on the Moon, so…

…ah, I see. Title Screen City is on the Moon, huh? I feel like I should be more surprised by that than I actually am, but hey. Sure, Yoshi was born on the Moon. I guess that explains why he was so unimpressed by visiting the dark side of it, then.

Yoshi was born on the Moon. Yoshi is being a dick about being born on the Moon to the internet cafe clerk, who I’m still hoping is going to take over protagonist duties any day now. Yoshi is talking about how he left home, three months ago, and now he needs to make money to survive. Yoshi is sixteen years old.

So, how do runaway sixteen-year-olds make money on the Moon?

Alright, sure, whatever. Whatever. WORLD END ECONOMiCA is the tale of sixteen-year-old Yoshi, a Moon-born boy who ran away from home to make a fortune trading stocks. You know what? I can accept this. I can even accept that he dresses like a video game ninja, for some reason. 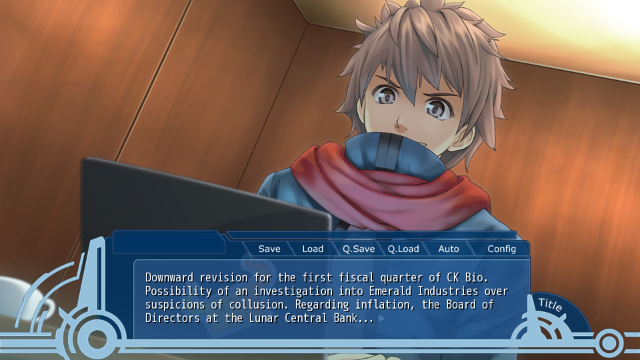 Yoshi proceeds to talk about stock trading a lot. Like, a lot a lot. Yoshi, dearest, I’m sure you’re pretty proud of the trading strategy that allowed you to turn 1000 ‘mools’ — whatever those are — into 72000. I mean, that’s actually a pretty impressive increase, Jesus. Alright, I changed my mind. By all means, keep talking about your stock tip wizardry! 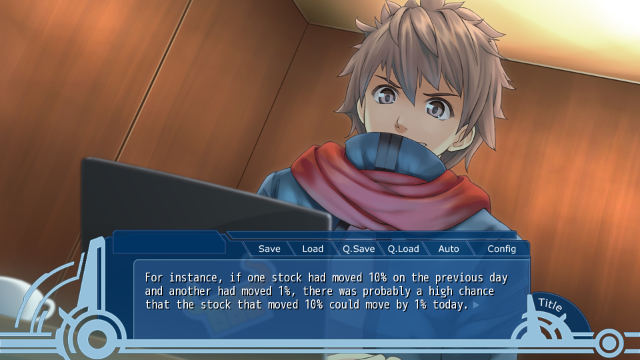 But wait! Before we can get too deep into the intricate differences between short selling and margin trading, developments develop. Police officers enter the internet cafe, on the prowl. On the prowl for… youngsters that look like they’re ditching school! And Yoshi is a youngster who’s ditching school! Oh, shit, maybe he’ll be caught and forced to go home to his loving family that he ran away from! 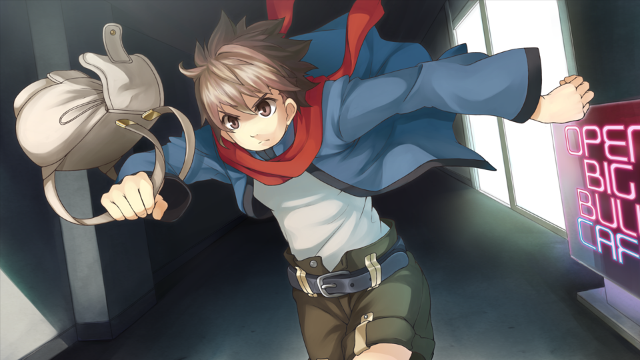 What follows is something that would be a high-octane chase sequence, if it wasn’t presented entirely in text and still images. Yoshi flees from the police, using the lunar city’s vertical landscape and low gravity to enact daring acrobatic escapes! He’s got those human muscles, after all, so…

…Wait, hold on. Yoshi was born and raised on the Moon. We established this earlier, in excruciating clarity. How would he have the muscle mass necessary to do kickass aerial acrobatics? Game, you can talk about how ‘human genes have been fine-tuned to living on Earth’ until you’re blue in face, but it doesn’t work that way. We see significant muscle loss in the actual astronauts we send out into space right now! If Yoshi really is a lunar native, he should have the muscle mass and skeleton structure appropriate to someone who grew up in low gravity. Which means less kickass high-flying maneuvers, and more the exact same kind of thing you’d see back on Earth.

Ouch! My immersion just took a Moon rock to the face. 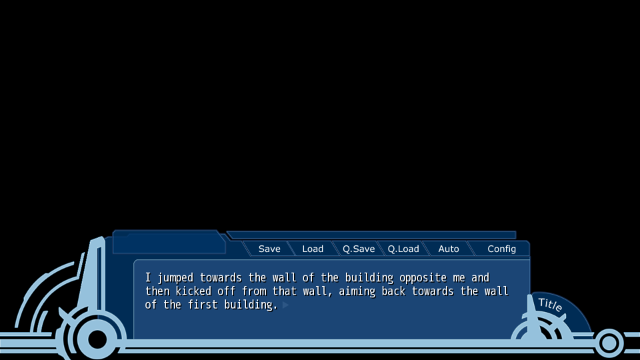 I’ll stop complaining about this, now. Even though the game keeps bringing it up over and over.

After impossibly escaping the police officers who, given the nature of their job, should at least be equally capable at soaring through the air as he is, Yoshi decides the best way to cool off is to go get something to eat at a nearby Chinese restaurant. Because that is what you do. There, he meets an annoying waitress with pink hair, demonstrates handily that he doesn’t understand how shapes and colours work… 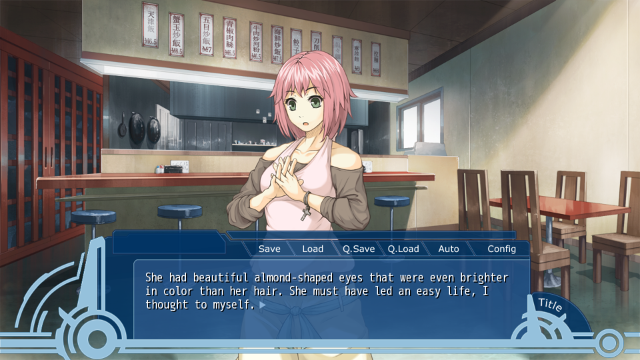 Her eyes are round and her hair is like *super* bright. Good tries, though!

…almost gets into another scuffle with the police, because of course they would check the surrounding area immediately… 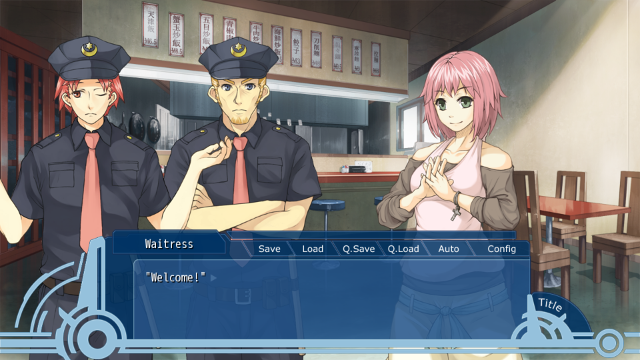 …and, well, a whole bunch of stuff happens, and Yoshi ends up living in a church with the aforementioned waitress and a black-clad socially stunted math nerd. 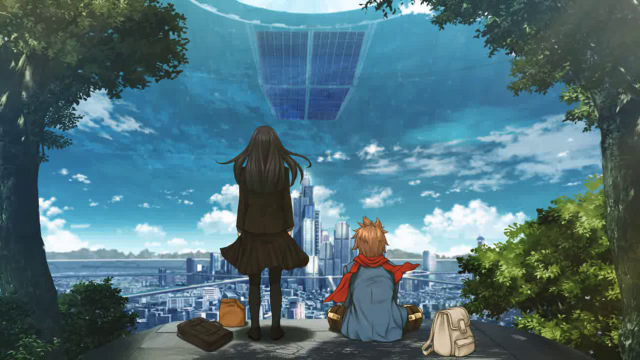 No, sorry, I don’t understand either.

So yeah. Er… I have no idea what this story is about, right now. Or what it’s going to be about. I’ve seen about three characters, I’ve been inundated with details about the Moon in general and the lunar stock market in particular, and now I’m living in a church with a Christian waitress and a runaway prodigy. And then there’s still that ‘going to the frontier’ dream angle, which I don’t think has come up at all after the opening scene?

It’s also worth mentioning that I haven’t been asked to make a single actual choice so far. Might be a fluke, given that this is ‘only’ the prologue: Fate/Stay Night’s prologue has zero choices, but I’ve been told more player interaction comes up there later. Maybe WORLD END ECONOMiCA is similar? There’s only one way to find out, and that involves… well, for you, it involves clicking to the second page of this review. The process on my end is a little more time-consuming, but that’s how this whole deal works, I suppose. See you on the other side of time, readers!