It was a dark and moonless night.

“Bah, humbug!” Jarenth was overheard to mumble. “I don’t know what to do for this week! I could just grab another random game, but I find myself tired of all the ur-Japanese VNADS I’ve been reviewing for the last month and a half. High-school-age people in a high school setting, one man surrounded by half a dozen women all meticulously varied in looks, hair colour and personality, maybe one or two entirely non-threatening guys thrown in for good measure… It works as a formula, sure, I guess, but can I find something different for once?”

And look, in a flash of thunder, there appeared before him the Steam suggestions queue. “Why don’t you play Cinders“, it chimed, “Moacube‘s re-imagining of the Cinderella story? Look at how little high school uniforms these screenshots have on display!”

And all was right with the world again. 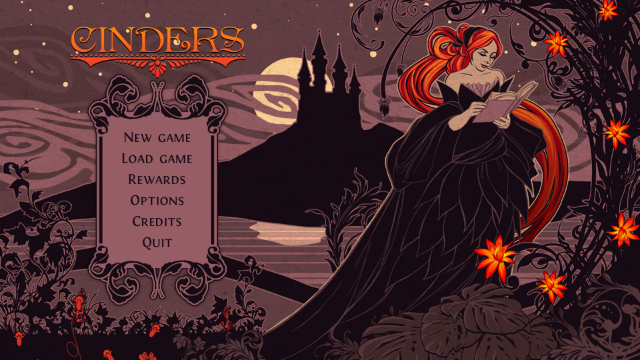 It really is something else. The music is nice, too.

What’s slightly less gorgeous is that Cinders’ options menu is impeccably sparse. Apart from a few toggle-able options, the requisite text speed, and a confounding resolutions menu, there’s nothing. Noticeably, there’s no sound sliders: I’ll either take Cinders’ sound and music the way it likes it, or not at all. Not too wild on that, to be honest. 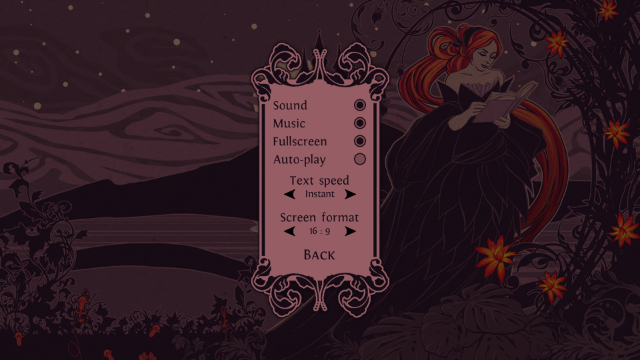 “But I don’t *want* to manually thumb my headset down!” “TOO BAD”

Aside from that, only the Rewards menu, which holds endings and ‘trophies’, looks somewhat interesting. And since I haven’t actually played any yet… yeah, might as well get to that immediately. New Game, go. 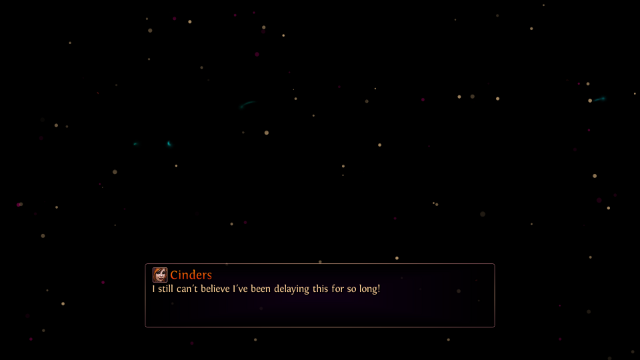 “I can’t believe I still haven’t played this goddamn game!”

“Maybe if I’d acted earlier, things wouldn’t be so broken between us.” The box continues to talk. “But I suppose it was easier to whine about things than to change then. Isn’t it always that?”

“But tonight! Tonight is the big night, where I change everything!” Good going, box-called-Cinders! Stay positive!

Suddenly, I learn a thing! 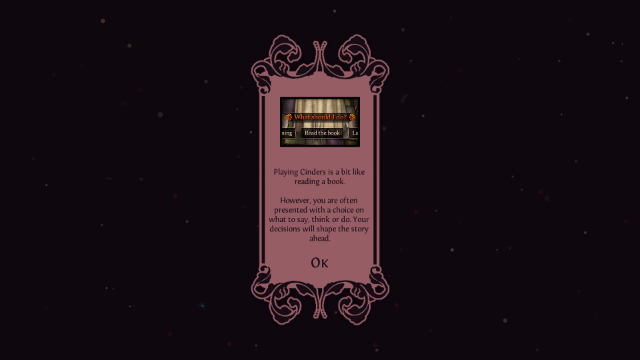 ‘How to play a visual novel.’

So what’s it gonna be, Cinders? Do people deserve a second chance or not? 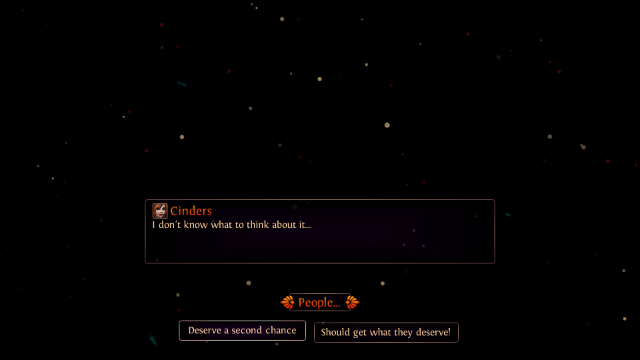 Yeah, let’s go with that.

The box babbles on for a little while, about choices, fates, and stepsisters. And on that segue… 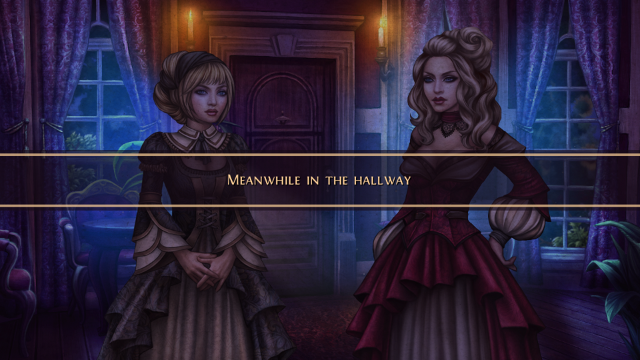 Meanwhile, in the hallway: two people with fish-faces talk!

These two fine ladies are called Gloria and Sophia. They’re talking about someone, who did something. Something they never expected! Or, at least, they expected she’d do something… but nothing like this, no.

Gloria and Sophia’s murmuring is interrupted by a pounding on the door, a summoning of the mother, and the entrance of an apparently nameless Captain. 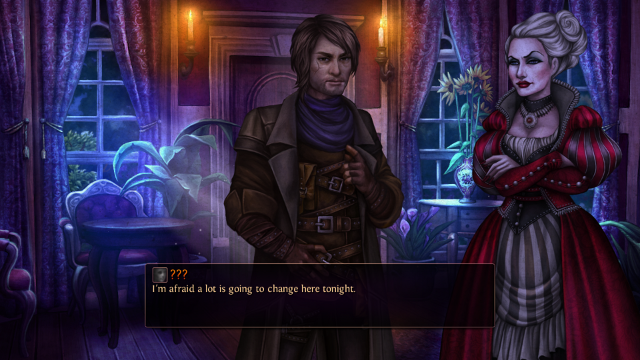 I’m whisked back to the blackness, where the Cinders-box narration is interrupted by the appearance of Sophie. Did I plan all of this, she asks me. How much of this was my conscious doing? Should I… lie to her? 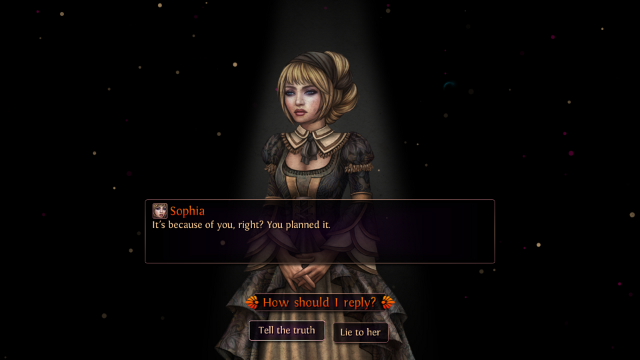 Seven days prior, I am Cinders! 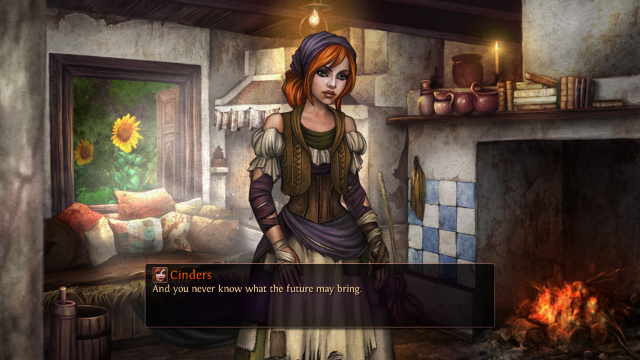 Or, if you will, Cinders! 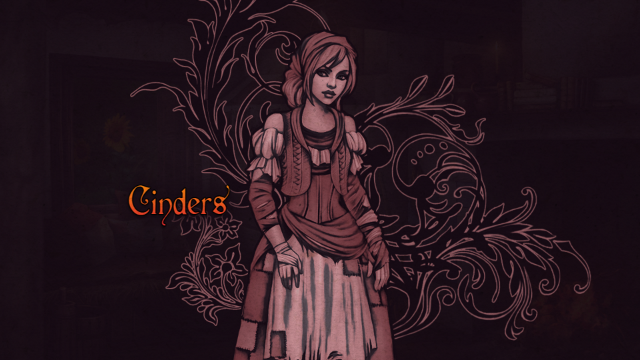 Cinders is, of course, Cinderella, the fairytale girl who lived in servitude of her evil stepmother and stepsisters before fairy magic won her a prince’s heart. I don’t know how much this new, hipped ‘Cinders’ is going to play out, but a similar opening is definitely established: Cinders lives in a manor with her extended family, except they treat her as an unpaid servant and she’s sick of it.

Cinders has some time off from her duties! What should I make her do? 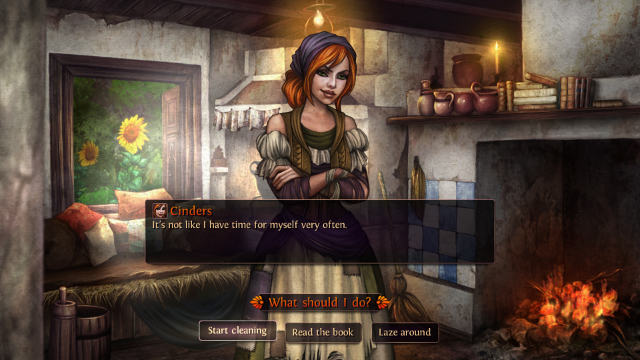 Those floors aren’t going to scrub themselves, *Cinders*.

For making this deep, meaningful choice, Cinders — the game — rewards me with a deep and meaningful red rose trophy! 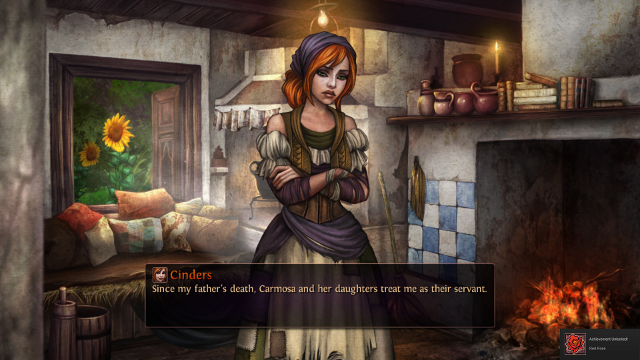 The Red Rose of Clicking a Button!

Evil stepsister Sophia enters. Hey, I saw you in the intro, seven days in the future. Long story short: Sophia is a dick to me, and ‘mother’ wants to talk to me. 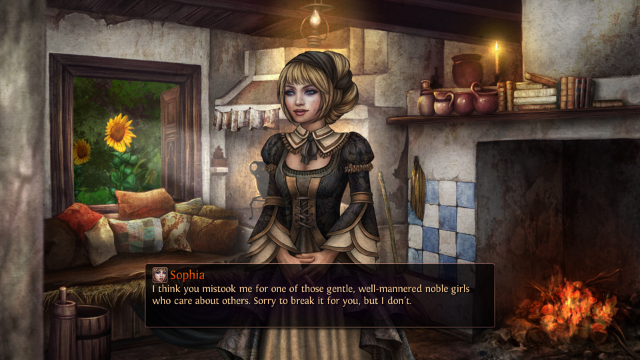 In the gorgeous hallway — seriously, these backgrounds are amazingly detailed and so colourful. Anyway, in the gorgeous hallway, I also run into Gloria, equally from the future, who’s a dick to me in a slightly different way. I talk to her for a little bit, trading jabs about waiting for charming princes to rescue us. Little does she know. In-between the dickery, though, some hints of a more complicated character relation start shining through: although Gloria is the Lady Carmosa’s daughter, she’s still treated as a servant of some sorts. Is Gloria… really okay with this?

And why do I feel as though I’m asked to make a dating sim choice here? 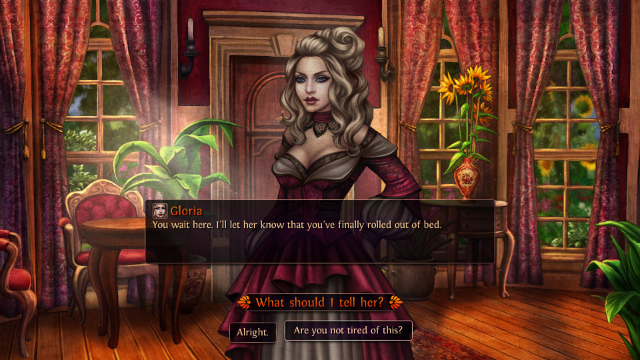 No, not like that. Get your mind out of the gutter.

Introspection is interrupted by the arrival of Lady Carmosa, a woman so full of energy that standard rules of still-frame transition don’t apply to her. 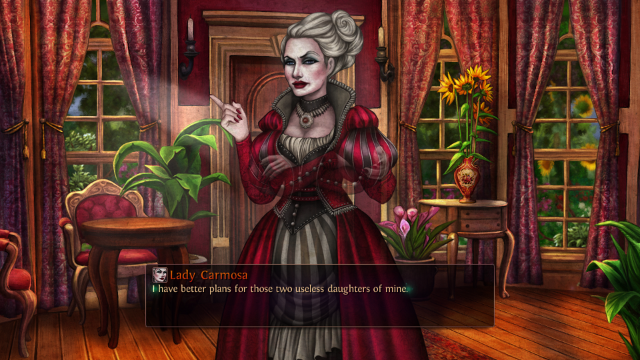 She moves *so fast*!

Anyway: in-between insults and orders, I understand that Lady Carmosa wants me to go pick up something in the town’s general store. Which, hey, is as good an excuse to leave the house as any other! Let’s roll.

I leave the house by way of map. 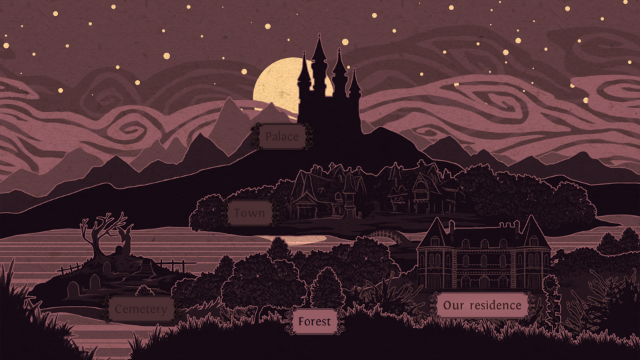 I ditch visiting some dumb lake or whatever to go straight to town. There, I witness the guard captain, still being all Belty McStrappenstein, kill a bunch of thugs for taking a kid hostage. Or, well, ‘see’: I hear about it vigorously.

Goddamnit this town is pretty. 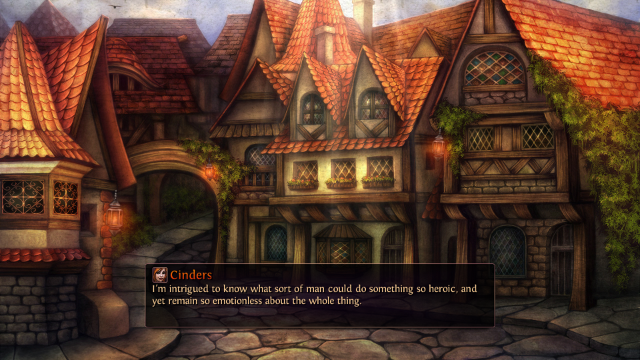 The art direction in this game is amazing and that’s no lie.

Anyway. I enter the general store, run by a man called Tobias. Apparently we’re ‘childhood friends’, and my brain immediately rejects him as the obvious standard love interest. Ugh. I buy the unnamed thing from him, haggle down the price, and then use the leftover money to get drunk in the tavern and talk to that strapping guard captain.

No, that actually happens. 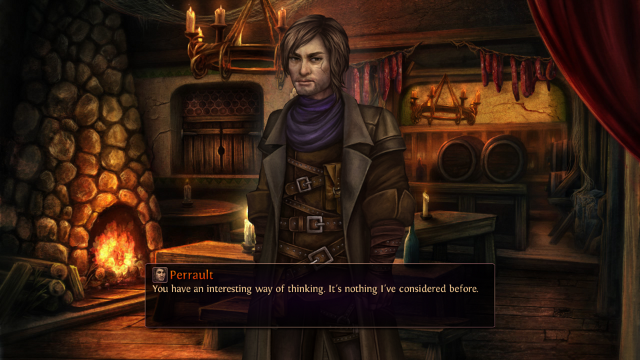 Cinders uses a neat visual ‘branch’ indicator to tell me whenever my current situation has in some way resulted from my earlier choices. For instance: it’s only because I haggled over money that I had the money to hang out in the tavern to begin with. Seeing that little branch appear in the top right makes me feel… powerful. In control of my own destiny. I wonder what other choices I get to make?

Getting yelled at by Lady Carmosa for ‘not haggling’ — she doesn’t need to know what actually happened — is equally a result from one of my choices. It’s slightly less cool than booze and chats, but hey. Power, and all that.

Meanwhile, the camera shifts to Captain Perrault and the Prince. Yeah, there’s a prince. No, his name is not ‘charming’. Yes, I’ll probably still get to marry him at story’s end. 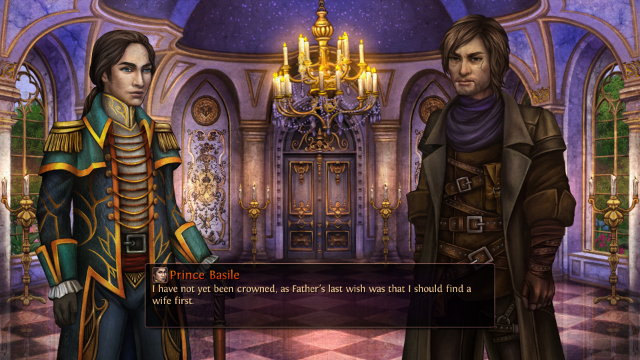 We’ve all read fairytales before. The prince and the girl get with each other in the end.

Shifting the camera away from Cinders is an interesting move. I don’t actually get to do anything in this segment, but I still learn about the Prince’s life troubles in a way that I otherwise wouldn’t have. Let’s just hope Cinders doesn’t actually give me a chance to use this out-of-character knowledge to my own benefit, because I will 100% definitely do that at the first opportunity.

Heedless of the upcoming ball, Cinders’ life rolls along for a while. I have to do chores for my sisters, and with my sisters, and relish the time to trade insults with them. Or rather, I can tell that Cinders herself is desperately trying to find some common ground with Sophia and Gloria… but it’s not really working. Maybe I shouldn’t have snarked at them so hard, earlier? The branch icons popping up every now and then remind me that things could have been different, so often, time after time. 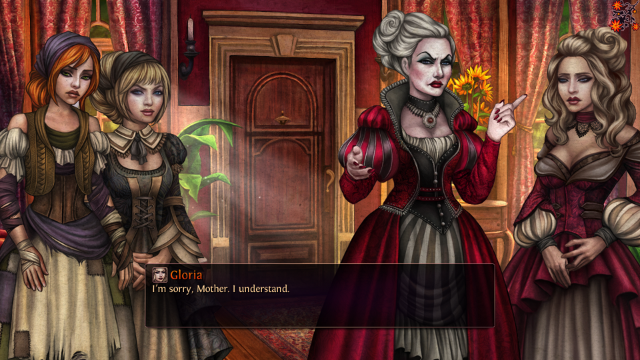 Maybe this scene could have been less sadness and anger?

The branch icons also remind me that Cinders-the-game is very fond of not letting me read text back past the last branch. This is… incredibly weird, and jarring, and I should probably save my game more often than I do right now. Seriously, though: I can understand not letting me retake the choice, but what’s the deal with not letting me read the words involved? That’s just mean.

Cinders’ life is never boring, I’ll tell you what. One day, I’m socializing with my hateful sisters. The next night, I’m sneaking out to catch Tobias the merchant and ‘shady character’, whose given name is Shady Character, in the middle of some suspicious dealings. With the masked ball I don’t know anything about yet — but which I’ve heard about by way of Shady Character taking the camera for a while — coming up, everyone is a little more on edge than usual! Lady Carmosa is leaving for a while, Gloria and Sophia are fighting over control of the house and the servants I never ever get to see, and Cinders…

Cinders has just run into what appears to be an incredibly out-of-place voodoo priestess trope. 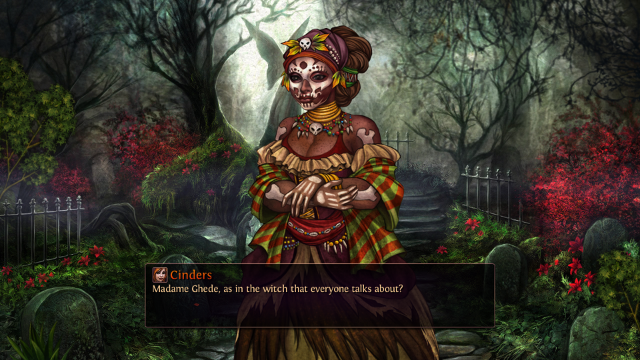 No, but seriously. What is this? Did my stories get mixed up by mistake? 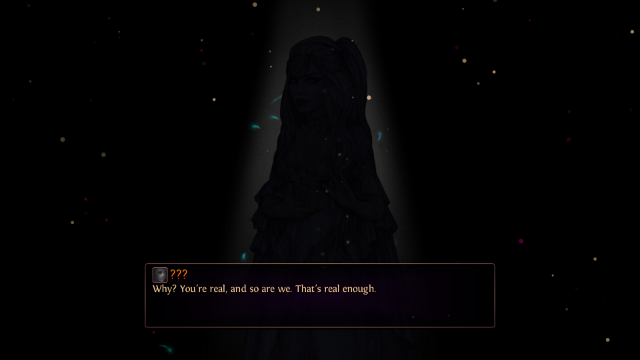 I mean, those, I can actually accept. Of course magical dream fairies exist in fairytales.

I can already tell Cinders’ story isn’t about to just follow the Cinderella tale. Sure, the elements are there: masked ball, prince, evil stepmother. But simultaneously, things are already shaping up to be different: I’m somewhat smitten with the captain of the guard, I’m learning about my sister’s individual quirks, I’m contemplating just running away from it all, I haven’t seen any transformed pumpkins yet, and why is there an African wise woman in this village, anyway?

This fairytale is shaping up to be something else, is what I’m saying. I’ll get back to you once I figure out how it ends.