In the last episode of Jarenth Plays Beyond Earth, I picked my sponsors, prepared my expedition, and set down on the planet of Wittbecker 109-e. Terra Atlantea. Boldly going where no man has gone before, this extraterrestrial colony is a once-in-a-lifetime chance to avoid the mistakes of the past and forge an amazing future for everyone involved.

Beyond Earth immediately deluges me with information. 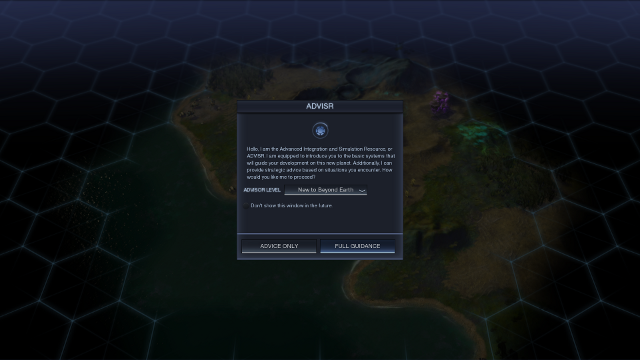 “Hi! I’m Clip- I mean, *ADVISR*. It looks like you’re trying to forge an amazing future! Would you like help?

Sure, digi-Jeeves, I’ll take the full ‘New To Beyond Earth’ guidance package. I’m pretty sure this won’t come back to ridiculously annoy me later.

Next, and still before I get to do much of anything, I am asked to choose my destiny. 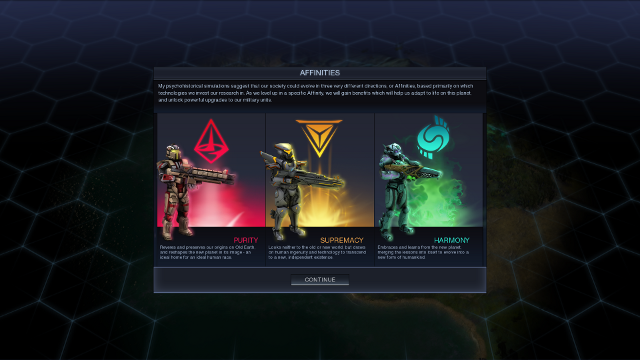 If you didn’t hear that in the Mortal Kombat voice, I’m sorry for your loss.

Okay, Beyond Earth isn’t actually asking me to choose anything yet. But I feel the pressure regardless! Game, I just started. Why are you asking me about stuff like this already? You say Affinity influences my life on this planet and ‘powerful upgrades for military units’, but I don’t even know what my military units are. You’re crazy if you think I can make this choice already. So many variables involved…

Actually, looking at what I’m seeing here, this choice might not actually be as difficult as I think. I look at Purity, the red option, ‘revering and preserving Old Earth and the human race’, and I’m filled with an overwhelming sense of… eh. Purity feels like the Affinity for needlessly proud, militaristic flag-posturing dickheads to me. What’s so intrinsically great about humanity, anyway? I’ll tell you what’s great: humanity is so amazing that I’ve had to wear pieces of sharpened glass and bent metal on my face, just to be able to see clearly, since the age of 13. Intrinsic humanity can go bite me.

Meanwhile, turquoise Harmony looks like the typical hippy nature-loving nice guys faction. “Wow, a new planet, let’s go hug all the alien life forms and start an intergalactic drum circle”, that sort of thing. I will bet you good money that at least one of the victory conditions in Beyond Earth involves ‘merging with the aliens’ or ‘transcending’ or that kind of join-the-hive-mind lingo. Partially because of the whole ‘spiritual successor to Alpha Centauri’ thing, but also partially because this Affinity exists. And I’m just… guys, we don’t know anything about this planet yet! We don’t even know if there are any aliens yet, unless you’re counting the plant life. And they might not even be nice! This could be a planet full of, like, giant bugs or something.

So Purity is for jerks, and Harmony is for hippies. And yellow is my favourite colour. And my favourite Dominos pizza is the Supreme. When you look at it like that, it’s not really much of a choice at all.

With that bit of future planning out of the way, let’s get back to Beyond Earth. I’ve cleared all the helpful advice popups, but I’m still not out of the woods as far as decision making is concerned: the icons in the lower right are practically clamoring for my attention. 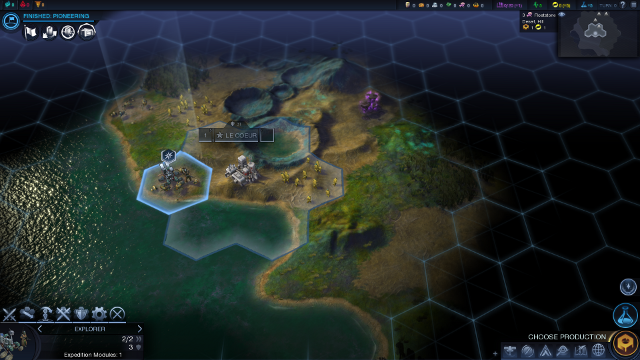 “Jarenth! Jarenth, pay attention to us! Your continued success depends on you dancing to our whims!”

I open the Le Coeur city screen. It looks like this: 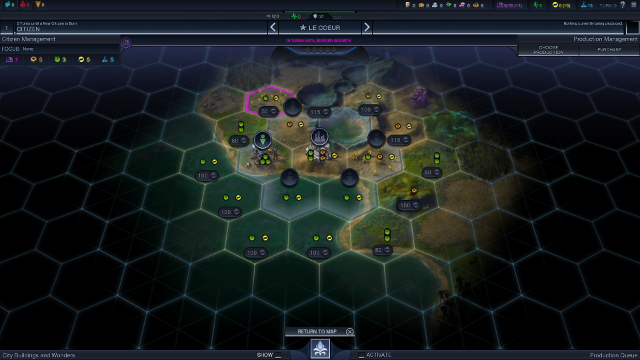 Basically, if you’re played Civ 5, you know how this works. If you haven’t: you can see my city in that center hex. The hexes around it, the ones with the little icons in it, represent the area my city citizens can work in. This gets me the resources noted by the little icons. Green apples for Food, to help my little city grow. Orange nuts for Production, to actually build things. Yellow tildes for Energy, to keep my machines running and to rapidly produce thing. Purple books for Culture, which helps expand my borders, and which probably does other stuff too, I didn’t get to that yet. And blue flasks for Science, which is Science.

Right now, Le Coeur has one Population unit, meaning one tile that’s not the center tile can be worked. The city AI has assigned that worked to a three-Food tile, which…

…Hold on a minute. Are those giant bugs my citizen is farming? 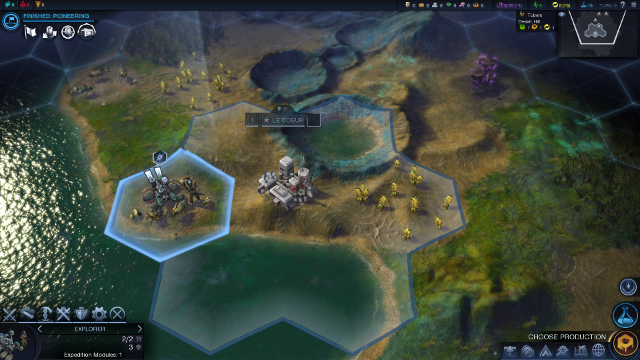 Goddamnit, they are giant bugs! All around the colony! I told you Harmony guys this could happen! Christ, this feels the worst possible place to put down a colony pod. Why are we even…

…Oh. The giant bugs… the giant bugs make good eating, I guess. I… alright, I’m not actually the one doing the eating, so I think I can be alright with that. But let’s try to get some actual farms up soon, just in case. Just in case.

Anyway: the city AI has assigned the one Population unit we have to… ugh… to farm the giant bugs for food, which should help Le Coeur grow quickly. Later citizens will be auto-assigned to gather other materials, hopefully less gross — holding out good hope for those floating purple rocks in the top right corner, those look like they might be cool — according to the colony’s needs. I can either select one of the five resources to indicate priority, or I can manually assign citizens if I feel like it. Which, I mean, I do, I want to get them away from the herd of giant bugs yes I’m still not over this, but I resist tampering with it for now.

Le Coeur can also produce units or buildings with its five Production per turn. What should I get? 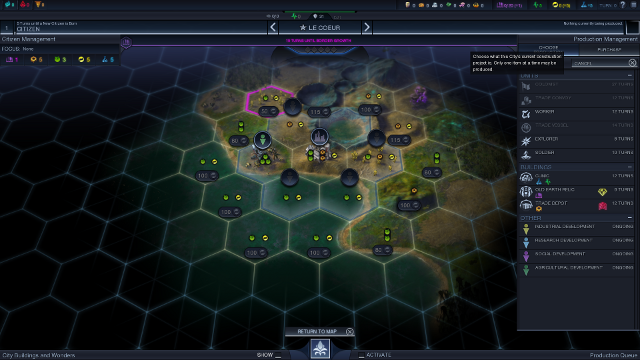 ‘A restaurant that doesn’t serve *just* giant bugs’. Is that on the list?

Let’s see… as far as units go, I can build three. A Worker helps me improve the nearby tiles, an Explorer can explore the world — I started with one of these, actually — and a Soldier, well, shoots guns at things. I can’t make any of the other three yet: I need a Trade Depot building for Trade Convoys and Trade Ships, and a city needs 2 or more Population Units to build Colonists.

I can also pick one of three buildings. The icons on the left here are shorthand for the kind of thing a building is good for: the Clinic boosts Science and… green squiggle, the Old Earth Relic improves Culture, and the Trade Depot — hey, there it is! — is good for Production. The icons on the right represent my city advisors giving their opinion: the Economic Advisor suggests I build the Relic, while the Military Advisor is gung-ho about the Depot. Do I… have any other advisors? No?

Oh, and I can also opt to turn (25% of) the city’s Production into Energy, Science, Culture or Food instead. In older Civ games, that kind of thing was usually unlocked after research. But I guess one benefit of starting in the far-off space future is that we have this shit locked down by now.

I end up going for the Trade Depot. Building it will increase Le Coeur’s Production by 1, and open up two ‘trade routes’ and the associated units, for an ongoing maintenance cost of 1 Energy. I reason that boosting Production now will help me get more stuff quickly, later. It hurts not to pick the Science-boosting Clinic, but you can’t do research on a foundation of nothing.

Oh, and speaking of science: Beyond Earth is now egging me to choose research. Which is my jam. I click the button, and… 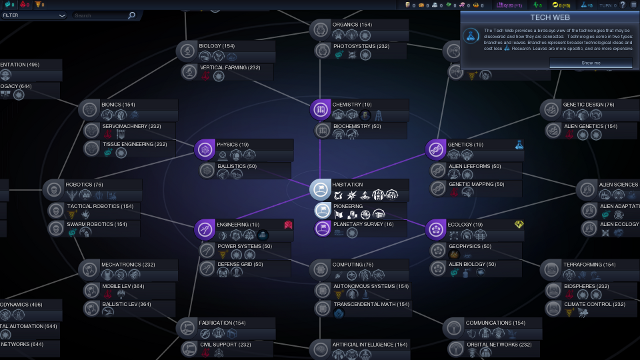 The gist of this screen is that science is represented as a branching web of ‘nodes’, each with one or more ‘leaves’. Researching the (relatively cheap) node gains you access to the technologies therein opens up the connected nodes, as well as to the (relatively more expensive) leaves of that node, for future study.

As far as what you can actually get from each study: the list includes new combat units, new buildings, ‘world wonders’, new abilities for your workers, and bonuses to certain units and buildings. Additionally, some technologies are marked with one of the Affinity icons. Getting to that tech improves your ‘level’ in that Affinity, which… has benefits, I guess. Unclear on what exactly, but I’ll probably get to that at some point.

Oh, hey, wait a second: I can actually mouse over the Affinity levels in the top left corner to see some of the bonuses. That’s pretty neat. Let’s see what Supremacy gets me… 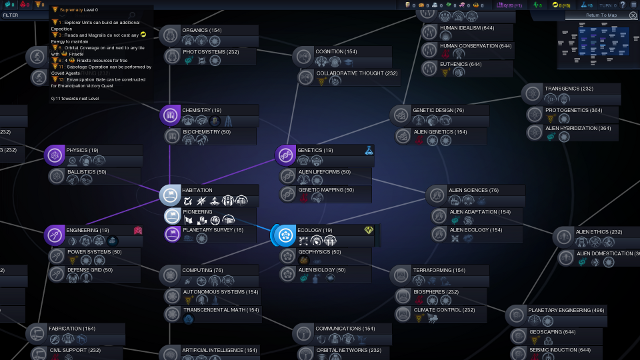 I can’t actually parse any of this stuff yet. But it probably looks quite cool.

(Heya folks, Future Jarenth here. Like last time, I’ll occasionally be chiming in to provide the kind of commentary and insight that Present Jarenth hasn’t figured out yet. One of the conceits of this Let’s Play is the idea of discovering stuff as I go along, but Past Jarenth overlooks a few things that may or may not drive game-savvy readers mad if I don’t address them.

For instance: see that list of Supremacy bonuses up there? See how the 3-point bonus is ‘Roads and Magrails do not cost Energy to maintain’? Do you really see it? Congratulations, you’re more aware of how Beyond Earth works than Present Jarenth is right now, or ever will be.

Alright, back to the show.)

Like the city screen, the science web has advisors. I try to craft my own plan for a while, but eventually decide to go with my Economy Advisor’s suggestion of studying the Ecology of this new place. In only nineteen turns, give or take, I’ll have a better handle on what makes Terra Atlantea tick. 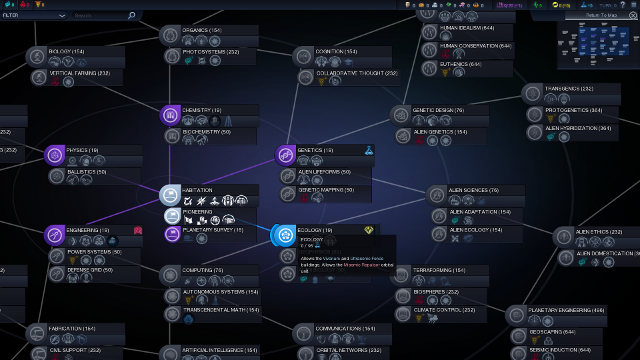 Here’s what it does. Put this knowledge to good use.

What is left is Beyond Earth telling me about Victory Conditions. As it turns out, there are no less than five ways to win. One is the relatively straightforward military victory: knock over everyone’s capitals and be the last one standing. Three of them, I learn with a little prodding, are actually Affinity-specific victory conditions: by getting a high enough level in any of the three Affinities — level 13, whatever the hell that means in the grand scheme of things — I can start pursuing the associated victory. The Supremacy one is called Emancipation, something I actually quite like the sound of. Finally, there’s a fifth victory ‘Contact’, which seems to involve contacting aliens in like three different ways. I’m not too sure about that one. 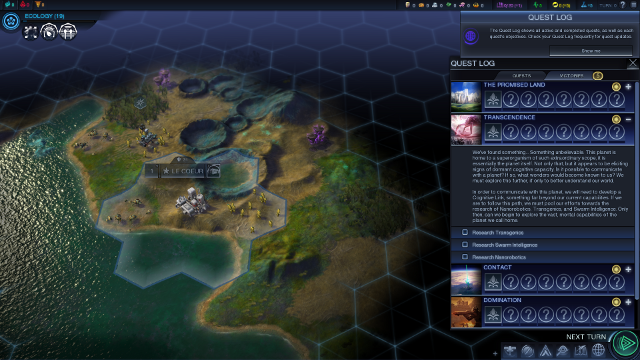 The Harmony victory is called Transcendence. Scroll back up to paragraph seven. Did I call it? I totally called it.

I’m actually a little disappointed at this victory spread. It’s one military victory and four science-related victories. As far as I can tell, there are no victory conditions involving culture or diplomacy, the way Civ 5 had. I guess in Beyond Earth, we literally can’t all be friends? That’s disheartening.

Victories are a later concern, though. Returning to the present…

…I guess I’m actually pretty much done for this turn. I’ve set up building projects in Le Coeur, I’ve picked my first research project, I’ve squicked out about giant bugs, and I learned something about the ways I could try to win this thing. All that’s left is to give orders to my one unit, an Explorer.

The southwest part of Le Coeur’s immediate environs looks to be water, which I can’t access yet. I opt to go directly north for the time being. No reason! I’m just curious what’s up there. 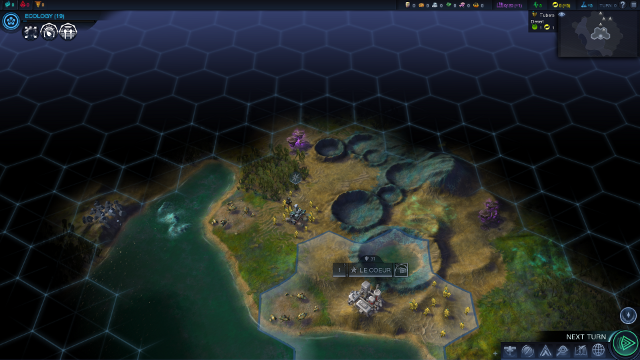 And with that, my first turn on Terra Atlantea ends. Score: twenty-five points. I don’t know actually what this number means! But I’ll do my best to keep it going up. At all costs. 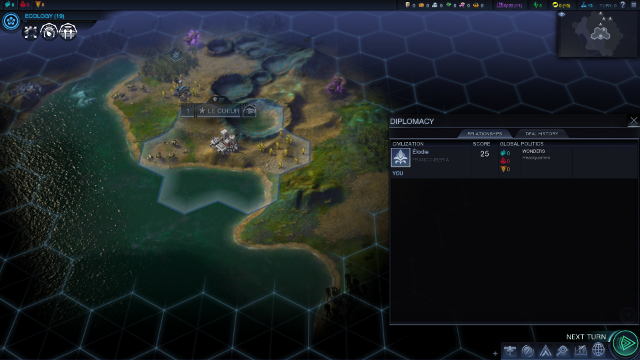 Also quite unsure what that ‘Élodie’ refers to.

Next episode: I start exploring Terra Atlantea. What alien wonders does this new world hold? Hopefully, the answer does not involve more giant bugs.