“In the year 9595, I’m kinda wond’rin’ if man is gonna be alive. He’s taken everything this old Earth can give, and he ain’t put back nothing, woh-oh…”

It is an image commonly bandied around in science fiction and future predictions that, at some point or another, we’re going to tap the Earth for all it’s worth. Fossil fuels and rare minerals are sharply finite, ‘sustainable’ energy may or may not prove to be that, and even such things as farming land, fresh water and living space won’t accommodate all of us, forever. Nothing lasts forever, and an Earth capable of supporting human life is far from nothing.

So what will we do when we run out of Earth?

Here, the pictures painted differ. Some imagine apocalypse scenarios, wars and devastation and a struggle over remaining resources that is nasty, brutish and short. Others are more hopeful: in the face of greatest adversity, they maintain, humanity will finally manage to get its collective shit together, band together, overcome, and find some way to turn back the doomsday clock. There are those who bank on outside intervention, hoping deities or extraterrestrial travelers will bail us out in our hour of need. We’ve already seen how well that idea can go.

And then there are those who feel that the correct response to a dying home planet is to learn to let go. That if Terra Firma can no longer support us, we should strike out to find another place to live. That we need to go… beyond Earth.

Heya, readers. Welcome to the much*-anticipated third installment of my Let’s Play series: Jarenth Plays Civilization: Beyond Earth. In the next few weeks, I’ll take you through my very first time playing (Sid Meier’s) Civilization: Beyond Earth, the recently-released spiritual successor to (Sid Meier’s) Alpha Centauri. A game that I loved, incidentally. Guys, I loved Alpha Centauri so much. It was, no joking, one of my formative childhood games, and one of the oldest games I can remember genuinely losing a lot of time to. That I was going to play any game that purports to be anything like it was pretty much guaranteed.

To wit, this series. Let’s get cracking!

For those of you who don’t know this game: Civilization: Beyond Earth is a game about colonizing an alien planet. The nations of a dying Earth have banded together into an impressive space program, aimed at finding new habitable planets in the void. Planets were found, plans were drafted, and giant colonization starships were launched. The ‘Space Race’ victory condition of old Civilization games in action, basically. Beyond Earth is the game that takes place after one of these colony ships actually makes planet-fall.

As with my previous Let’s Plays, I’ve opted to go into Beyond Earth sight unseen. This may lead to me making stupefying, easily avoidable newbie mistakes. It may also lead, however, to me chronicling a journey of discovery through the landscape of a new game as it happens. Which is a tradeoff I’m willing to make, honestly. Nevertheless, I’ve cranked the in-game’s advisor up to a pretty high level: ‘New to Beyond Earth’-level hints, full guidance. Let’s hope we don’t get a repeat of the Engineers debacle.

New Game. Difficulty level: Mercury, the second-lowest ‘standard’ level. Game pace: also standard. I’ve played Epic Civilization 5 games before: fun to burn down an entire afternoon, but less so if I don’t intend this LP to run until the year 2016. And as for Map Size… well, I think you can guess. 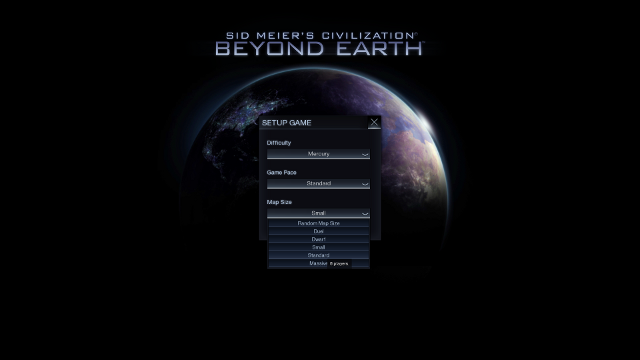 I basically went with Situation: All Normal.

Who should I be?

Perhaps the most important game-starting question in any Civilization game: who should I be this time around? Beyond Earth plays this choice a little differently and a little more varied than earlier Civ games, however. Instead of only picking one particular ‘faction’, it turns out I get to craft my own.

First, a Sponsor. While the nations of Earth may have built and operated their space program together, the water of the womb sometimes runs thicker than the blood of the covenant. Racial-cultural divides still exist in the undetermined space-future, is what I’m saying. They might be a little different from the ones we currently have, but you get the general gist. 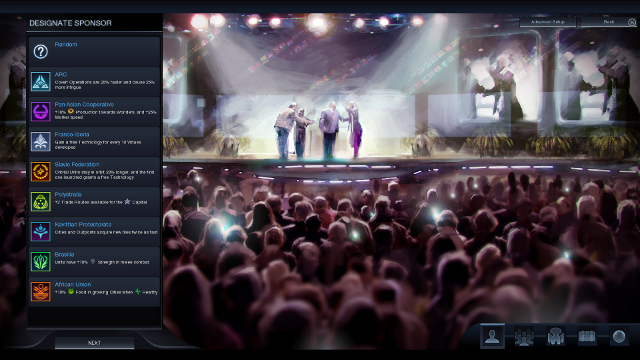 The question, then: which socio-cultural entity funded *my* colony ship?

They say to write what you know. And if I’m to write about playing this game, I’ll have to play what I know. I like all of these bonuses in one form or another… but I, Jarenth-the-actual-writer, am a European man. And a scientist. And I like to consider myself pretty virtuous to boot. The obviously European-inspired Franco-Iberian faction seems like a perfect fit.

Second, my colonists. All of them are going to be hardy workers, engineers, inventors, and soldiers, as the extraterrestrial frontier life demands. But what discipline will they excel at? 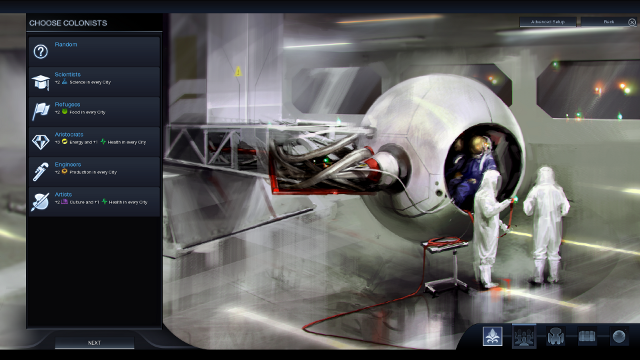 See if you can guess. The second-to-previous paragraph provides a *hint*.

This choice is actually way easy for me. Not only am I personally a scientist, but I usually tend to play research-heavy in Civ games. What can I say, I’m a curious cat. Plus, in Alpha Centauri, doubling down on research early ended up giving you massive combat advantages, to the tune of invulnerable plasma tanks and literal planet crackers. If Beyond Earth is even slightly like Alpha Centauri in that regard… Scientists it is.

Third, my spaceship. No, don’t get your hopes up: I’m not getting an actual spaceship. Yet. I just get to pick which part of my colony ship survives the trip down. 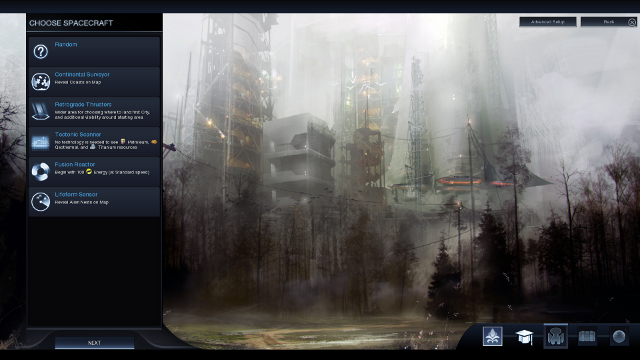 The rest of it made for pretty fireworks.

This choice is… tricky. All options seem somewhat good, but not great. Well, except the ‘100 energy’ one, that one sounds like a sucker trap. But all the other ones seem like they have some kind of potential.

I end up picking the Tectonic Scanner upgrade, which will allow me to see certain important resources early. I’m not entirely sure how much good it’ll do me — I’ll probably need the related tech to exploit them anyway — but I guess it can help me with laying claim quickly. I remember being fresh out of Uranium in Civ 4 once, just because I didn’t know where to look for it before. Never again.

Fourth, my cargo. What colony materials do I bring down? As with the colonists themselves, this one is easy: one of the options is distinctly science-oriented, and four of the options are not. 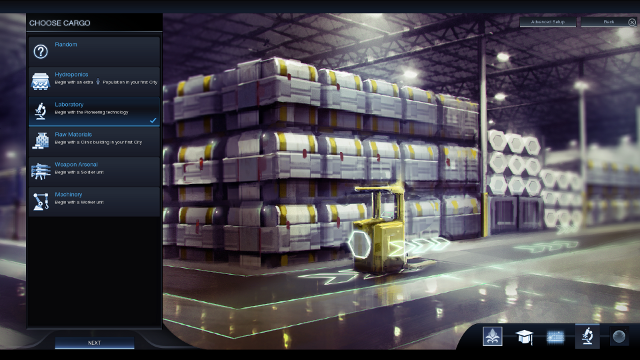 “Jettison all that other gunk. We don’t need it where *we’re* going.”

And last, my planet. Which planet was my colony ship headed towards? It’s not just the one Alpha Centauri, apparently. 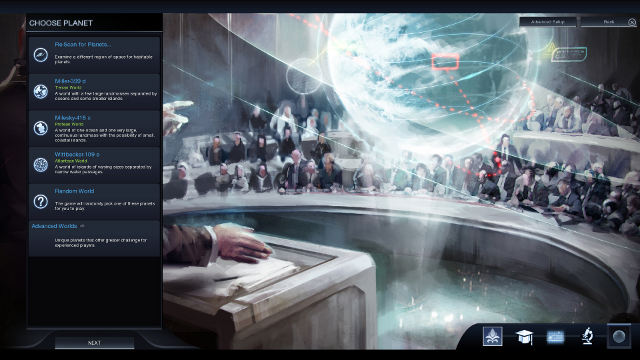 Turns out there’s a lot of cool places in space.

I resist fiddling around with the options for this one. Like it or not, I already know which planet I’m settling on. You see… I’m not just a ‘European’ dude. I’m a Dutch dude. And a running joke among my internet friends is that the Netherlands, an underwater kingdom that uses advanced technologies to harness and hold off the raging seas, is basically Atlantis.

I look at the planet selection screen. Wittbecker 109-e, it reads. Atlantean World. The inexorable pull of destiny is so palpable the air almost hums with it. I will conquer you.

And it is so that the Franco-Iberian scientific expedition to Wittbecker 109-e starts off. Loaded with bright minds, research tools, and the best colonization equipment this side of Old Earth, we will find a new home on this alien planet.

The thrusters burn. The pods detach. The instruments whirr, and beep, and calculate. The surface of Wittbecker — no, the surface of Terra Atlantea — is scanned, and several suitable landing spots are located. 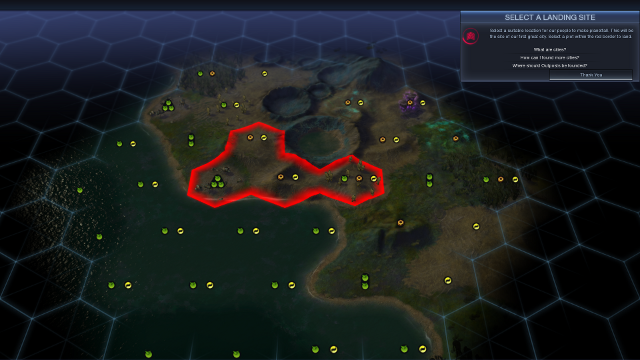 You’ll notice the Advisor chiming in. This will probably not get annoying incredibly quickly.

I chuckle at Beyond Earth’s suggestion for my first colony’s name. ‘Le Coeur’, huh? I suppose it’s fitting.

Welcome to the heart of our new Franco-Iberian civilization, colonists. We’ve plenty to do to make this place our own, so let’s get cracking. 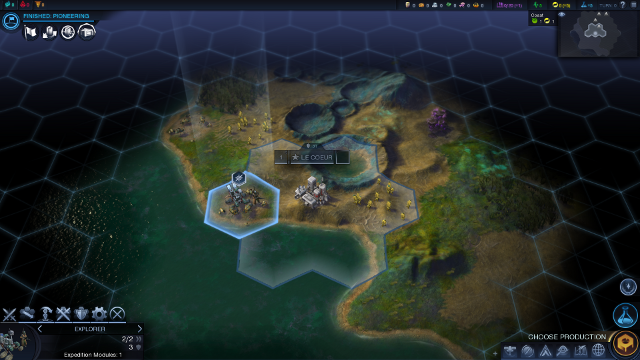 Take a moment to gaze in wonder at your entirely alien surroundings. Then, back to work.

Next episode: Turns out setting up an interplanetary colony involves a lot of bookkeeping. What do we build, what do we study, where do we go, what do we eat?