Yes, of course I was going to review the silly pigeon dating game. Of course. It’s been on my list for ages, and it was literally the first fan-requested review when I ‘announced’ I was doing visual novels and dating sims for a while. Because of course it would be.

For the handful of you that are entirely unaware of this game: Hatoful Boyfriend, by developer Pigeonation Inc (or is it Hato Moa?), is a high-school style dating sim set in Japan… in a high school populated entirely by birds. The only human character in this high school is the player, who — following conventions — has to take classes, survive school shenanigans, and foster an active dating life… with one of the many, many eligible single birds.

Moreso than with any other game I’ve done, I find myself having certain prior expectations when launching Hatoful Boyfriend for the first time. I’m already expecting this game to be light and silly. But just how silly are we talking about, here? 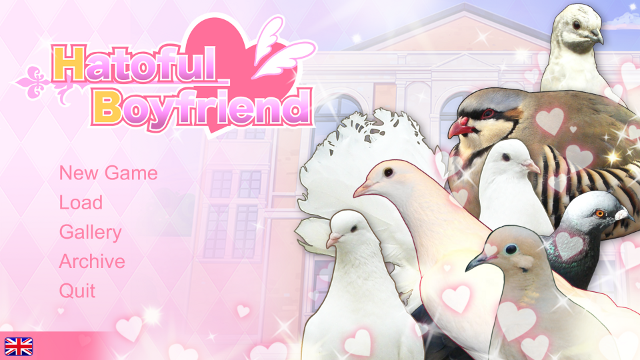 Happy upbeat music, photorealistic birds covered in hearts, and a preponderance of pink splattered everywhere? I’m guessing I shouldn’t hold out hope for treatises on the meaning of life, then.

My previous VNADS games didn’t have a lot of options to begin with, but Hatoful Boyfriend takes the no-settings game to a whole new level by offering zero options on the main menu. No graphics, no audio, no text speed, no difficulty settings for its tactical turn-based robot battles. Nothing. I’m actually almost a little impressed by this. “We know why you’re here, player”, it seems to say, “and it’s not to twiddle with anti-aliasing multipliers”.

Aside from New Game (which I’ll get to), Load, and Quit, the only other options of note in Hatoful Boyfriend’s menu are Gallery and Archive. The former is your standard dating sim Image Gallery ‘O Conquests, and I fully expect to be ogling my bird beaus here in the near future. The latter is… I’m not entirely sure what Archive is for? It looks a little like an empty IKEA closet, but neither the quill pen not the pencil offer any hint as to what I’m supposed to be able to do here. Another mystery to solve later, I suppose. 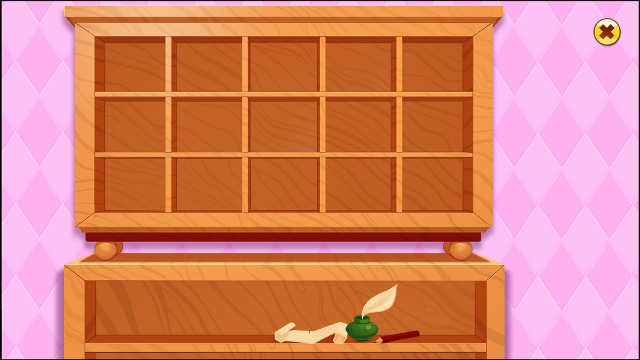 Or not. I don’t know! Maybe this is all just a massive red herring.

For now, let’s get pigeon-dating! I am very excited about this. New Game, go.

“Welcome to Saint Pigeonation’s. Please enter your name!” Oh, wow, I get to choose my own name? First and last, no less. No more messing around with dumb nicknames like Gus, or Captain Marauder! Finally, I’m in command of my own destiny!

The standard first and last names offered are ‘Hiyoko’ and ‘Tosaka’. Obviously, I can’t roll with this. At least not the first time around. I have to make my mark on this world! I have to show these pigeons that I’m not just some lazy imposter: I am Steven Beargal, famous ursine actor turned high school student! 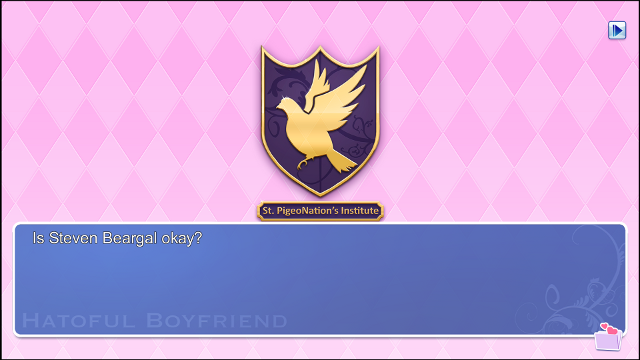 “Hatoful Boyfriend contains a powerful visualization module”, continues Hatoful Boyfriend about itself, “allowing even the birdiest of birds to appear as normal humans when first introduced. Do you, you know, want that?” I, er… yeah, sure? I have no idea what the consequences of this choice are going to be? But sure, do whatever you want. Just, listen: can I get to my pigeon dating school already? 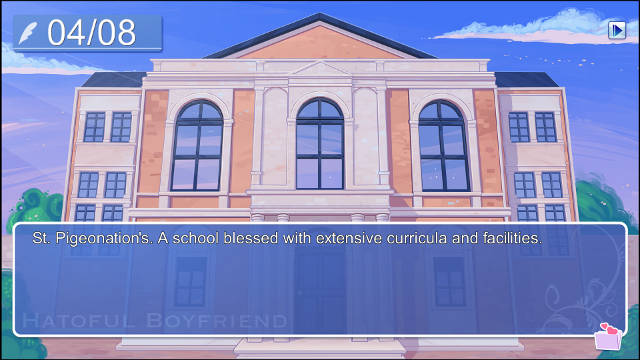 ‘St. Pigeonation’s. A really cool school. I’ve already been a student at this school for a year, you know.’

Huh. Interesting. I guess one good way of avoiding the ‘I’m the new student’ cliché is to make the main character second-year. I’m guessing Hatoful Boyfriend didn’t want to go the obvious body comedy route of ‘where are the bathrooms, what do you mean it’s just twigs and straw’.

Because, just in case you already forgot… 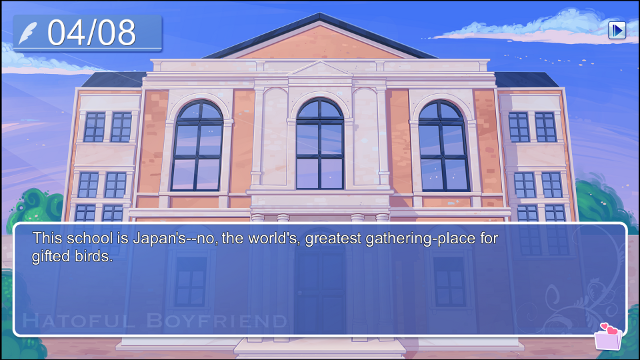 Everyone in this school is birds. But me. 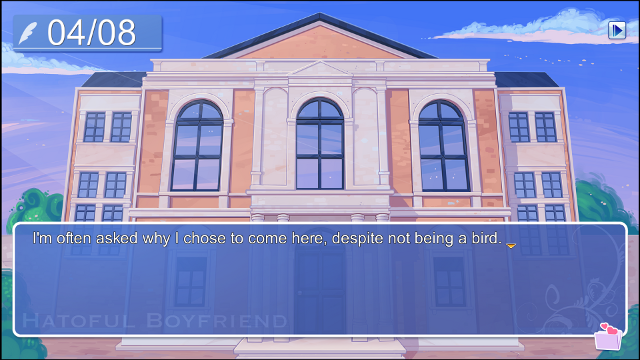 So why even *go* to this school? Good question!

Before character-me can finish that thought, though, I run into my friend, Kawara Ryouta. Man, Ryouta and I go way back. We’ve been friends ever since he was hatched. And now, we go to school together!

Ryouta is a rock dove. Or ‘common pigeon’, if you prefer. 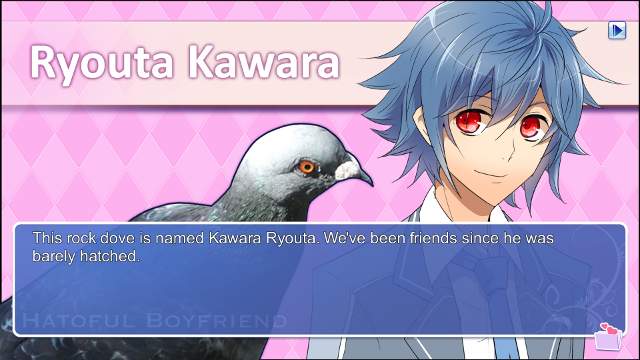 This is the ‘visualization module’ at work. Just so we’re clear: the image on the right is what a hypothetical human Ryouta *would* look like. The bird on the left is what he actually *is*.

Photorealistic bird image on an anime school backdrop. I wonder how soon that’ll stop being jarring.

I chat with Ryouta. “Breakfast was hard to catch today”, I complain. “I can’t seem to relax without red meat inside.” “Yeah”, Ryouta agrees, “life as a hunter-gatherer does sound rough.”

Hunter-gatherer? They don’t have Starbucks breakfast muffins in Japan? I mean, even if you absolutely have to eat meat, there’s no butchers around this town? I’m pretty sure a lot of bird species eat meat as well.

Anyway. Shit, we’re late for class. Let’s move it! Can’t be late on the first day of the first semester of the year! 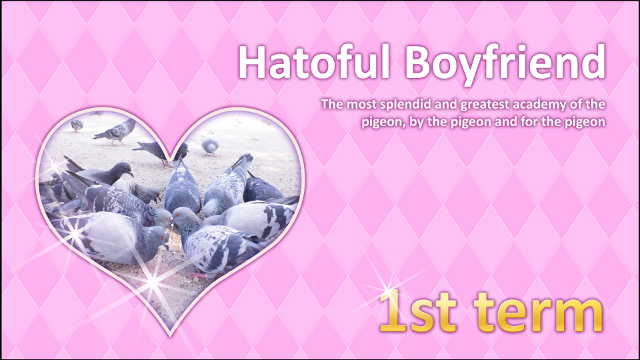 We are now in our homeroom class. I’m introduced to a number of new bird friends. Like Nanaki Kazuyaki, our homeroom and math teacher, who has a terrible sleeping disorder. 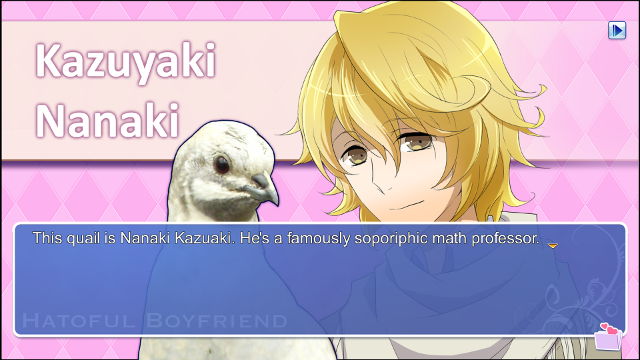 Pictured here next to this image of a generic blonde man. 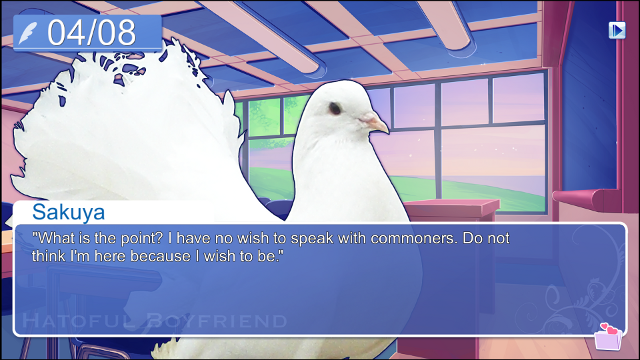 Don’t think he’s here because he *likes* us or anything.

In several steps, I’m taken around the school, introducing new locations and associated new characters as I move. In the library, returning books I borrowed over summer, I stumble over Fujishiro Nageki, the silent mourning dove. 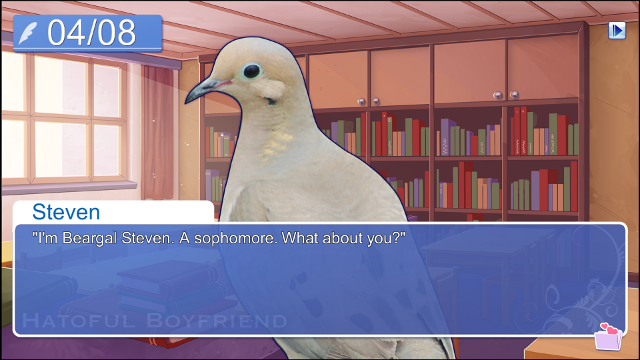 Also, Japanese naming schemas finally catch up to me.

In the hallway, I observe a rumble between Sakuya and his… brother? Brother-of-sorts, at least, Sakazaki Yuuya. 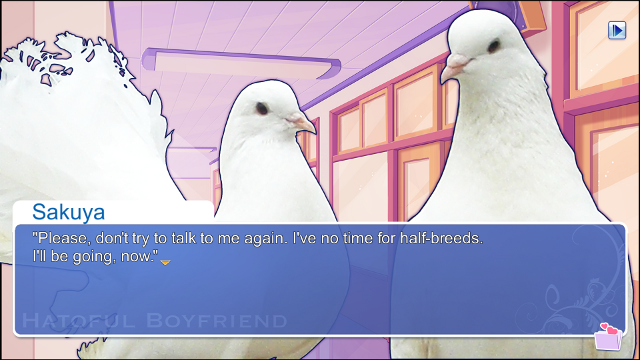 I’m not sure how these two *can* be brothers? They literally don’t appear to be the same species.

I also discover that my character is canonically a girl. I guess the standard name ‘Hiyoko’ could have been a giveaway, huh? But no matter: Steven Beargal, famous ursine actor turned high school student, has never had their gender established conclusively. I mean, I’m surprised these pigeons can even tell the difference. I can’t tell male and female pigeons apart, that’s for sure.

Since Ryouta’s weak stomach means he’s out sick quite often, I go visit him in the infirmary. Here I’m introduced to the spine-chilling dr. Iwamine Shuu. He looks as creepy in his partridge form as he does in his humanized portrait, and that’s a pretty big accomplishment for the art team. 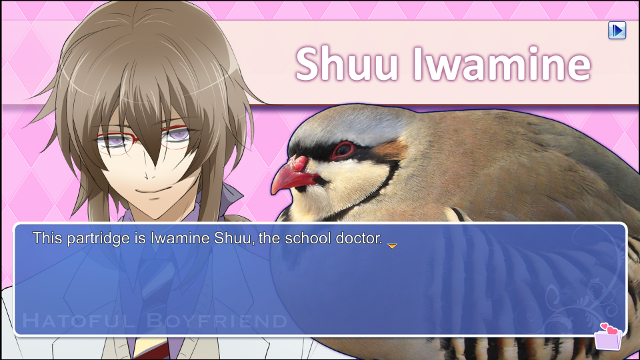 And finally, out on the track field, I meet Okosan. He’s… 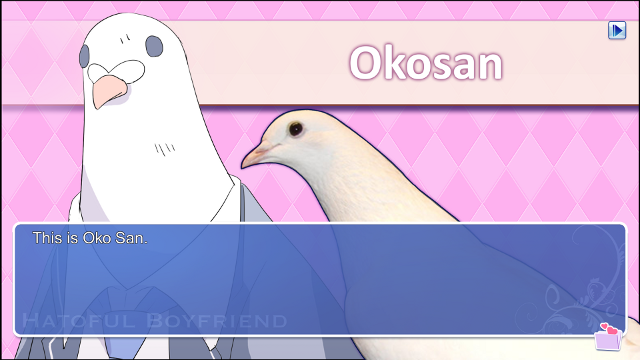 He’s a pigeon… who’s humanized… as a pigeon? Am I seeing this right?

That is to say, Okosan. 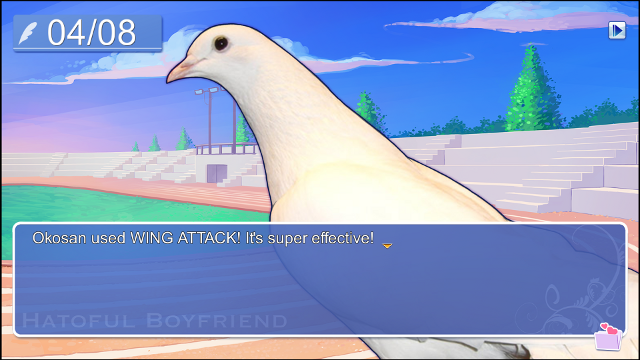 He talks in coos, he’s obsessed about pudding for some reason, and he uses Pokémon attacks. I may be in love.

Up until this point, I haven’t actually been asked to make any choices yet. But a few screens after meeting Okosan — or three in-game days, if the top-left time counter is to be believed — homeroom class is abuzz with talk of clubs to join. Hey, I can join a club! What should I do?

Veneer of weirdness aside, Hatoful Boyfriend is still a dating sim. I’ve seen seven birds with humanoid portraits so far, so I’m going to choose to believe that these are my Possible Objects Of Affection. And as we all know, almost any choice in a dating sim game usually relates to which person you’re trying to bone.

Let’s see… Sakuya is class council president, so joining that is probably ‘his’ route. Pass on that. The library seems like the fast track for Nageki, who seems interesting… but I’d be lying if I said I didn’t want to find out more about Okosan, who leads the track team. Sports it is! As for the other four birds, I figure either their routes aren’t connected to any of the clubs — Ryouta makes a point of not being able to join any clubs, for instance — or they’re too convoluted for me to make sense of right now. 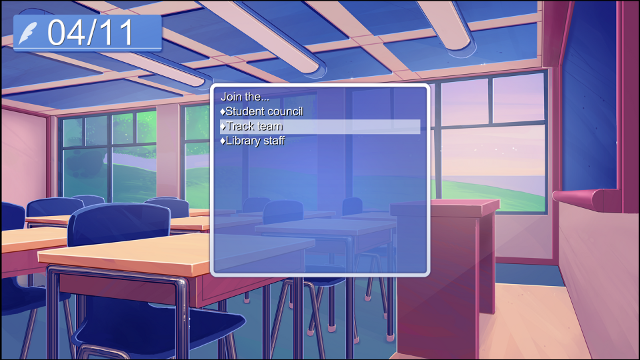 Track team is obviously the way to go.

A second choice is posited not long after. ‘It’s an elective day’, Hatoful Boyfriend proclaims. ‘You can choose to study whatever you want!’

Ah. A stat-based dating sim, is it then? I’m down with that. I can pick either math class, track class, or music class. Which, I’m pretty sure, correspond directly to the three stats I’m just now learning about: Wisdom, Vitality, and Charisma. I have one point in the first, five points in the third, and…

Eight hundred points of Vitality? Jesus Christ. Am I some kind of super robot? 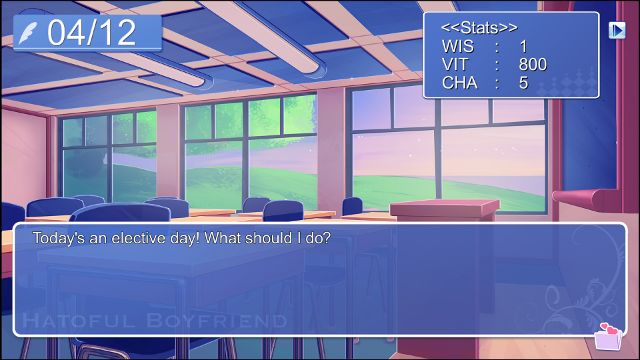 Or is this some kind of human joke again? ‘You humans may not be as smart as pigeons, or as charming, but by *god* you apes can run.’

On the one hand, I have so much Vitality that training that over any of the other stats seems like a meaningless joke. On the other hand, Okosan is leader of the track team. And just because I’m pretty strong right now, doesn’t mean I can’t get any more amazing. Gym class it is!

Gym class raises my Vitality by five points, for a total of 805. I’d like to say this didn’t feel like a major waste, but then I’d be lying.

Then again… after gym class, I try to join Okosan’s track team. He challenges me to a race: either sprint, or long-distance. Cleverly applying my knowledge of human stamina, I opt for a long-distance race… and Okosan beats me effortlessly. Crikey, that bird can run. How can that bird run so fast? He’s like half the size of my legs!

Classes completed satisfactorily, I then return home. There… 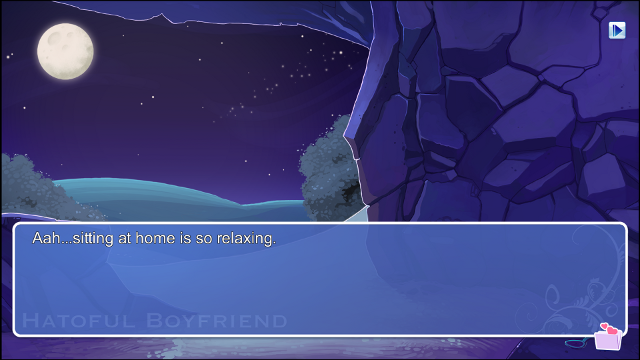 My home appears to be a cave.

Why is my home a cave? No, seriously: why would these birds accept me into their fancy-feathers bird school, and then send me to live in a cave? I know you guys have buildings! The school is a building! Can’t I sleep there? Why am I living in a bloody cave?

Anyway: once back home, cave sweet cave, I take some time to reflect. I don’t feel I’ve gotten particularly far into Hatoful Boyfriend yet… but then again, it looks like I have the basics down. Classes for stats, choices to chase a particular bird, lots and lots of reading. I’ll probably get more chances to interact with Okosan if I stick to gym class and the track team. And maybe there’ll be, like, a festival or something? Dating sims often have that. ‘Pick one character from the list of every character. That character now likes you more!’.