Hot on the heels of last week’s adventures into linear storytelling and boobs, I found myself browsing Sekai Project‘s website for games. Sakura Spirit made such an… impression on me, I just had to see what other games this studio has under their wing. Were they all going to be glorified cutscenes with half-naked fox girls?

While thus trawling the possibility space, I ran across a game called Sunrider: Mask of Arcadius. It confused me, because… it seems to have all the trappings of a visual novel game, what with the talking heads and the dialogue flow controls and the many multi-coloured anime ladies. A perfect fit for VNADS. But then it also seems to promise tactical turn-based battle gameplay featuring spaceships and giant robots. Seriously, a significant number of the Steam screenshots for it are taken up by hex grids in space and exploding star cruisers.

A free visual novel, made by the same guys who made an expensive visual novel I disliked? But which is also a turn-based tactics game? Compute, this does not. Obviously I had to go check it out.

Sunrider: Mask of Arcadius (‘Sunrider’ from here on out) opens with the most anime intro I’ve seen maybe all year. Accompanied by a woman’s voice singing what I assume to be Japanese lyrics and bombastic musical overtones, I’m bombarded with… 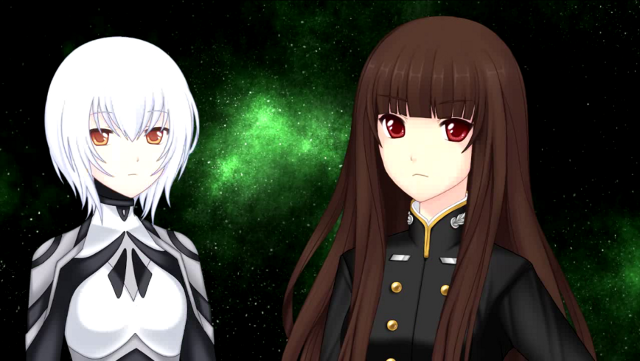 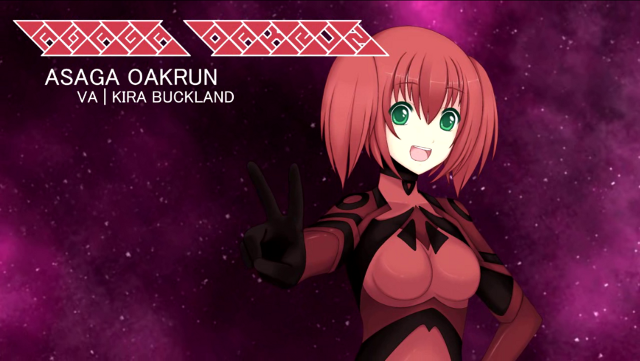 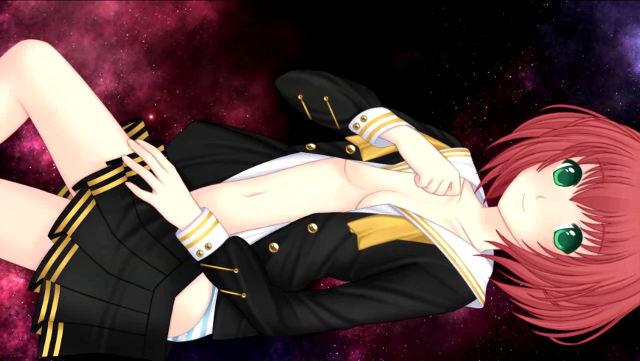 But also there are giant robots in space! 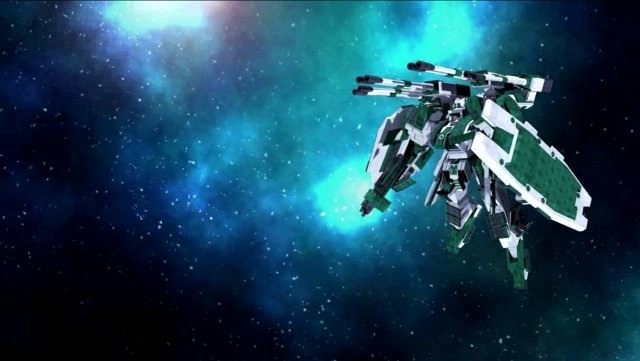 Because why wouldn’t you? It’s space, gotta get some giant robots up in there. 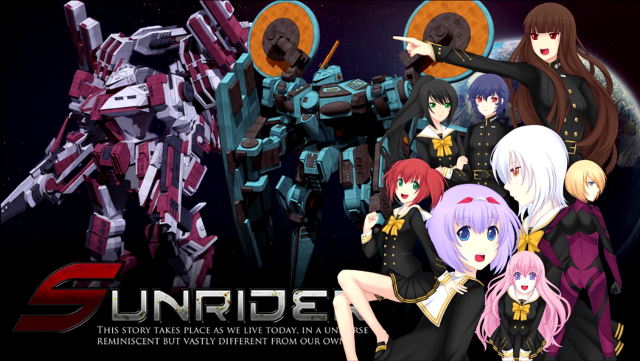 On the other hand, Sunrider has ‘Combat’ options. Mostly related to battle difficulty settings. The fact that Sunrider even has these options is already intriguing enough to me, but a cursory glance at them shows that this game is actually expecting me to take its combat seriously. I was half-expecting the combat to be a time-wasting minigame, a la Flower Shop’s farming, but it’s looking like I may have been wrong in that assumption. There is a ‘visual novel’ level of difficulty that apparently trivializes the combat, but come on. Come on. The Standard level of difficulty is ‘the way Sunrider is meant to be played’. How can I ignore that straight a recommendation? 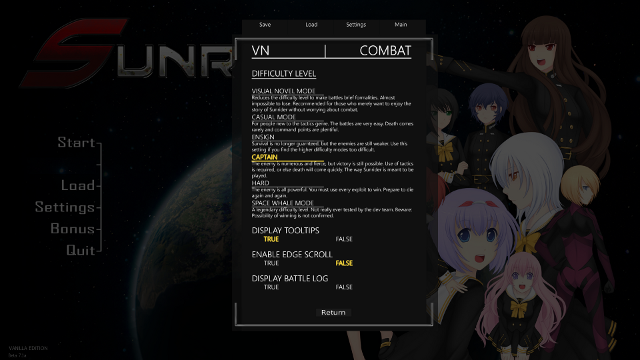 I also really enjoy that the hardest difficulty level is basically ‘we don’t actually know if it’s possible to win the game this way.’

“This story takes place as we live today, in a universe reminiscent but vastly different from our own.” I, er… 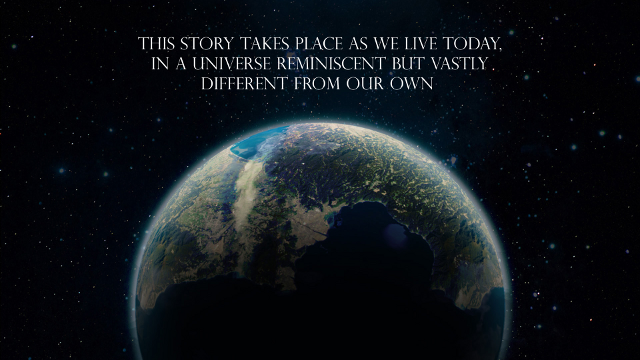 This sentence is so entirely without meaning I can’t find it in my heart to critique it.

Backstory time! Humanity has spread to ‘the four corners of the galaxy’…

…I do some mental spatial geometry to imagine what shape a three-dimensional galaxy should have in order to get to only four corners. I guess this galaxy is a triangle-based pyramid?

Anyway. Humanity has spread across the galaxy, subjugating all life everywhere. Because fuck you, aliens. As always, however, man’s inhumanity to man proves to be our driving conflict factor: ‘PACT, the People’s Alliance, has toppled the once-mighty New Empire’. 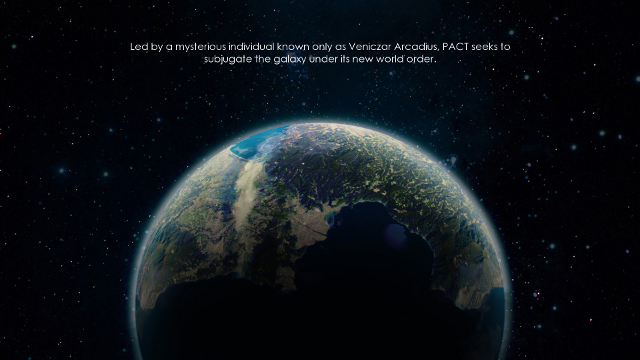 PACT wants to unite the galaxy… under a *world* order?

But let’s not bother with that right now. Time to cast our gaze to the neutral world of Cera, and to our protagonist, captain Kayto…

…Shields? Kayto Shields, that’s his name? I… wow, I actually don’t know what joke to make about this. 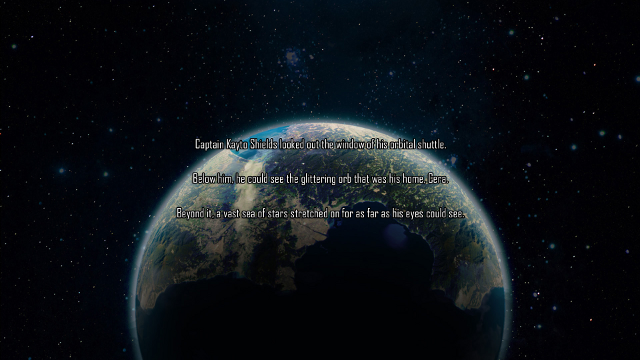 No. No, your name isn’t Kayto. Your first name is now Marauder, and we already know how your story will end.

Before we get to that fateful downfall, though, let’s cast our eyes present-ward. 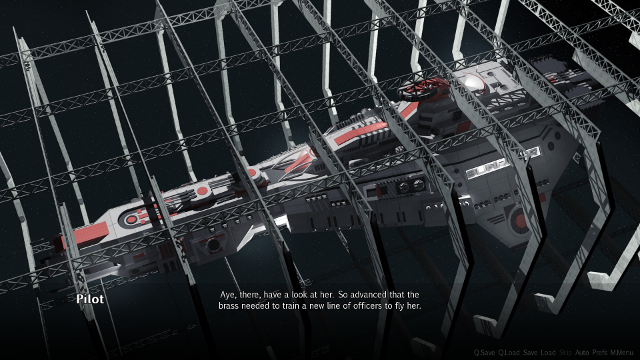 Finest ship in the fleet, and all that jazz.

Captain Marauder is getting a tour around the Sunrider. Providing the tour is First Officer Ava Crescentia, Marauder’s long-time friend from high school and one of the title splash women. And therefore, prime romance material.

Ava greets Marauder in a professional manner. And proving that Sakura Spirit’s total lack of options apparently isn’t all Sekai Project gets up to, I’m immediately given a choice of how to reply. Professional back at her? Or play up the childhood friendship angle? 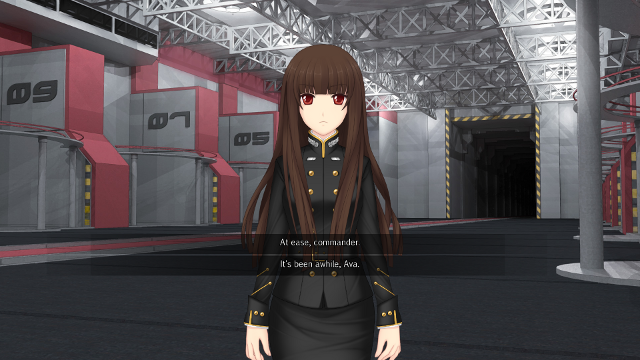 I’m okay with being professional about this, actually. What’s the deal with my Sunrider, First Officer?

Long story short: the Sunrider is carrier ship for ‘Ryders’, whatever the devil those are, but it’s also packed to the brim with battleship weapons. It requires only a skeleton crew to function, has one of the best warp drives in the galaxy, and always keeps that new spaceship smell even after long use. I mentally rechristen it ‘Sunrider Sue’, before continuing.

I’m given a tour of the ship. And by ‘given a tour’, I mean ‘handed the map controls and told to walk around the damn ship myself, what am I, your nanny’. The map folds out to a three-level blueprint of the Sunrider’s critical systems, and I can ‘move’ from area to the next if there’s a little circle inside the area denoting that I can do something there. Like, say, a little chibi gruff Ava face. 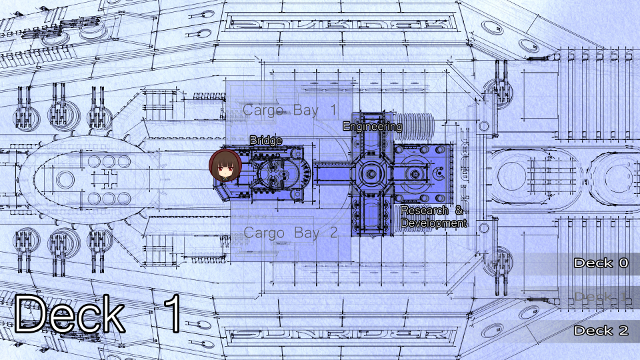 She gets visibly annoyed when you mouse over her.

The bridge has a star map. My office has a video phone I can use to make calls. The mess hall is where we eat. The engineering and research section, the med bay, and the Ryder hangar are still empty, but those should get filled in a couple of days. Probably way before the evil PACT fleets encircling our planet make their attack.

Alright, let’s take the Sunrider out for a test drive! Nothing fancy, just a trip to the moon and back. I’m sure nothing wi-

Explosions happen because PACT war ships have warped in, and they’re currently trying to blow up the Sunrider before she even has a chance to launch!

I didn’t even get to fly her yet!

What a bunch of goddamn jerks. Captain Shields is having none of that, though: we’re taking the Sunrider out into battle. The main cannon is offline, we have no Ryders on-board, and an accurate count of our missile supply results in ‘two of them’. But what’s the alternative? Not try to survive? 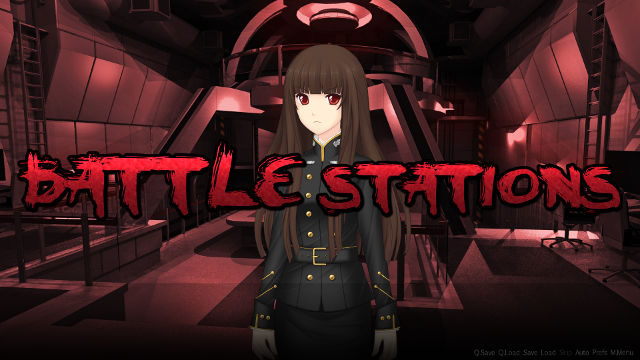 Yes, what that screen says!

I find myself on the battle hex grid. On the right: two PACT ships. On the left: the Sunrider. Also on the left: Ava, explaining how combat works.

She makes it sound simple at the start. Combat is taken in group turns, us against them. All units have an energy supply: energy can be used to move, or to active and fire certain weapons. Easy enough.

Then, it gets more complicated. I click the lil’ Sunrider on the map, and see that it has no less than five weapons options. Lasers, missiles, rockets, assault guns, kinetic guns… 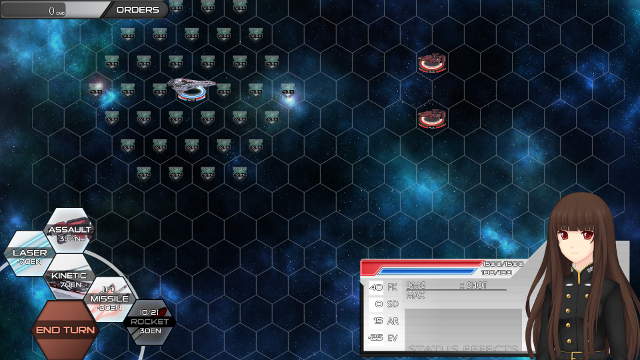 Crikey, that’s a lot of information. Mousing over the weapons themselves provides even more. Lasers are long-range, but weak, while kinetics are short-range, but strong. Assault guns fire multiple shots, but are extra weak against armor. Missiles and rockets have long range and high power, but they’re a limited resource and they’re vulnerable to enemy flak.

And in the bottom right of the screen, I see more stats still. I assume the red and blue bars are health and energy, respectively. There’s also four two-letter stats, that… maybe FK is flak? SD could be shield, AR is armor, and EV is… I dunno, Effort Values?

This is a lot of rapid learning for a high-stakes combat situation. Can’t I just blast the shit out of these enemy boats?

As it turns out, I can. I select the missile option. Little percentages appear over the enemy ships, telling me my missiles have 90% accuracy in this situation. Good enough! I fire. The screen cuts to an image of the Sunrider, firing the missiles… 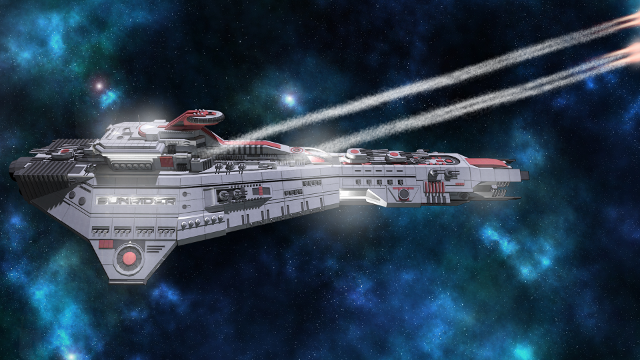 With an English-spoken voice command by Ava, oddly enough. I haven’t heard anyone speak so far.

…then to space, showing the missiles in-flight… 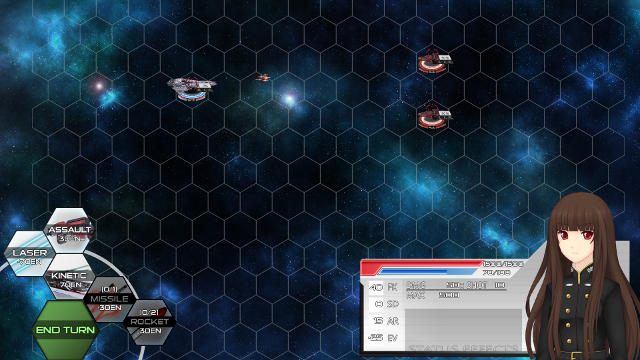 …and finally to the enemy ship, taking the attack head-on. 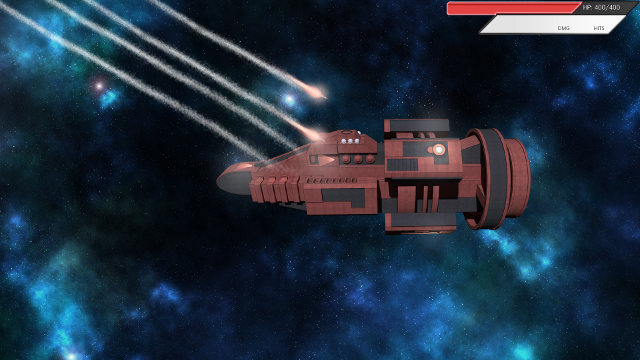 8 hits! 321 out of 400 damage! 80 damage mitigated by armor! Numbers! The ship is still standing, but I’ll bet you they’re shaken up right now. Don’t mess with the Sunrider.

In fact, you know what? I’m going to drive that lesson home. I still have 70 energy points left, which is enough for a high-accuracy laser attack. I fire the lasers, which are… weird, and bendy? 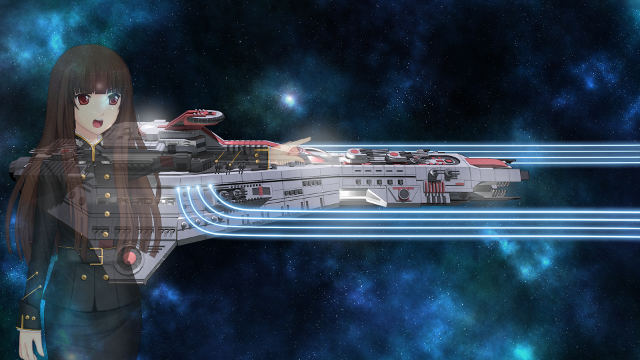 But the intended result is achieved: the enemy ship explodes in a fireball of failed hopes and dreams.

The remaining PACT ship fires its own missiles at me. Pop-up text tells me that I managed to ‘intercept’ 5 of them, at ‘88% effectiveness’. The missile salvo still hits me, but the damage I take is minimal. My reaction, however, is not.

Victory! The letters V I C T O R Y scroll up the screen, none of them even waiting for its neighbours before floating off again. Then, I receive my rewards: money for blowing up the ships, minus some ‘repair costs’ — blasted missiles — and something called ‘command points’. 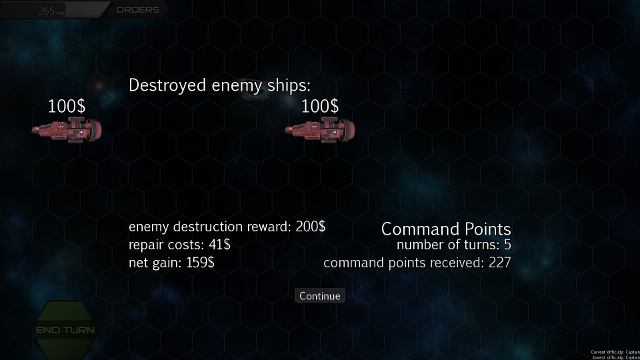 Turns out these ships are made of dollar bills.

My victory celebration is cut short when more PACT missile frigates appear. Like, a lot more. And then… something else. 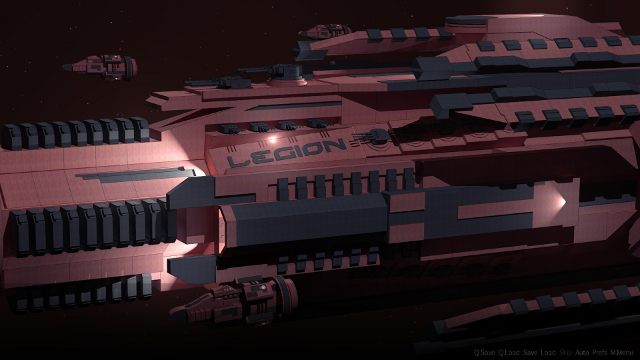 For reference: my ship is about twice the size of one of those smaller ships.

A super-dreadnought? Jesus Christ, I can’t beat that! I can’t even dent that thing! Cera planetary command erupts into chaos and panic, advising retreat and unconditional surrender and…

First, the Legion fires a million lasers, destroying every Cera ship that isn’t me. Then, it fires its giant main cannon… straight at the planet itself. 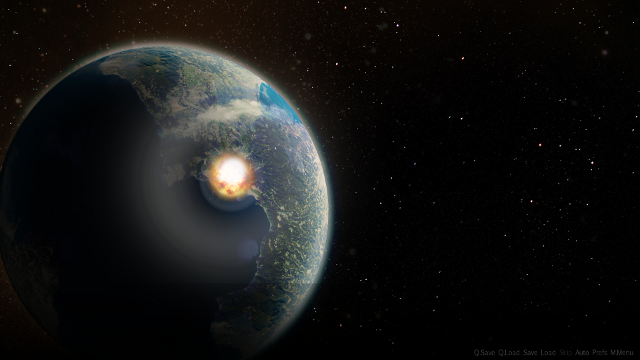 The planet is not okay with this.

No, it’s not destroyed. This ridiculously massive dreadnought is no Death Star still. But my planet’s entire capital city has just been vaporized in the blink of an eye.

The executive decision is made to bail. It’s tense, but the Sunrider manages to spool up the warp drives just before coming under major fire. We jump to… somewhere, a random spot in space. This wasn’t an ordered retreat, this was a mad dash for safety.

And just like that, everything we’ve known and relied upon all our lives has been blasted away. PACT has nuked and conquered Cera. We… we’re probably the last free Cerans left. Just one little ship, against… that thing. That thing, and that giant supporting fleet.

Ava is defeated, hiding her sadness behind her mask of professionalism. Captain Shields is grim, determined. Plotting how to get back at PACT for this. What will we need? Money, supplies, allies, plans…

And me? Holy shit, I am way on board. One ship’s amazing quest for vengeance and justice against the evil conquering empire that devastated their home world? Space tactics, space combat, space romance, space space? I’d ask where I can sign up, but it turns out I already have.

Be back later! I have space battles to fight.