Wait, what’s this? Another visual novel? That’s right, you bet it is! Surprise: I’ve decided to spend the next couple Indies Wonderland solely on visual novels and/or dating sim games. Welcome to Visual Novel And Dating Sim month, or however long I feel I can stretch this joke. Welcome to VNADS! I even made a website tag for it. Buckle in, boys and girls, because we are going on a ride.

Today’s thrill-ride: Sekai Project‘s Sakura Spirit. And, hey, guess what? Guess who you have to blame for me owning this game, and as a result, who you can blame for me kicking off this talking-heads-over-still-images parade? That’s right: it’s none other than our resident website ninja, Ninjustin. Which means you don’t even have to go very far if you want to yell at him, and/or encourage him, somehow. You can leave a comment at the end of this very article.

One could argue that I’m equally at fault here, because I had this game on my Steam wish list. I will vehemently deny and all blame, however. I’m just as much a passenger here as you are.

I don’t remember why I added Sakura Spirit to my wishlist.

No, that’s not a joke. I genuinely don’t remember. There’s got to have been some reason, but I’ll be damned if I can recall. Was it the promise of intricate gameplay? The hint of a gripping narrative? The vague suggestion of an experience so mind-blowing, using the word transcendental to describe it would be an insult? 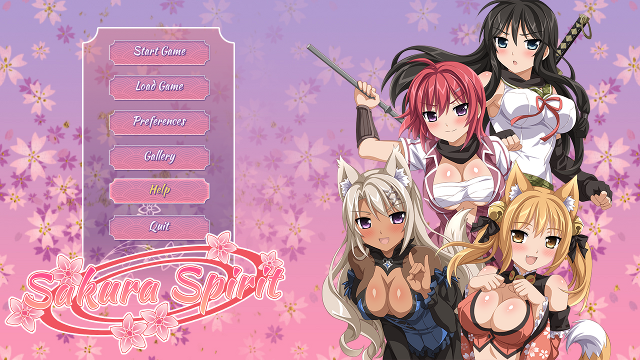 Oh. I think I remember now.

Much like last week’s Flower Shoppery, Sakura Spirit’s options aren’t really worth talking about. It’s… huh. Putting them side by side, they’re actually almost identical in content. Down to the weird, unexplained ‘auto-forward time’ slider, that I don’t remember actually doing anything in Flower Shop. Is this option layout a visual novel standard? And if so, what does that say about the genre at large? 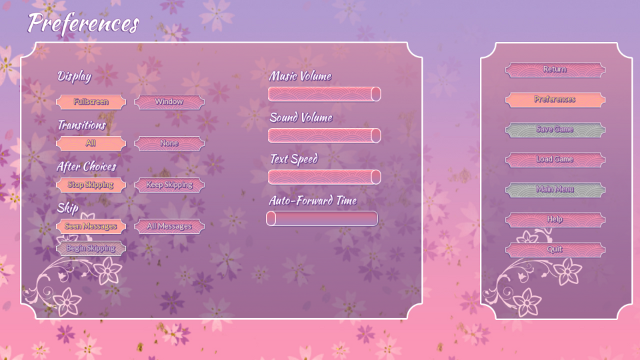 Something like “We know you don’t care about fancy graphics options and controls. That’s not what this genre is about. We understand you, player.”

Similarly, as with Flower Shop, Sakura Spirit’s story starts more or less from the word go. Long options-diving and intro-introspecting are another genre’s game: visual novels don’t have that kind of time or patience, because they spend their entire lives going for it.

“Every person has a dream they wish to pursue.”

White text on a black background. Off to a stellar start, I see. There’s no voice-over, either. Just… the tinkling of bells, sometimes.

“Yet, as people grow up, they often come to realize the truth: Dreams are nothing more than fairytales.”

“At least, that’s what most people say…” 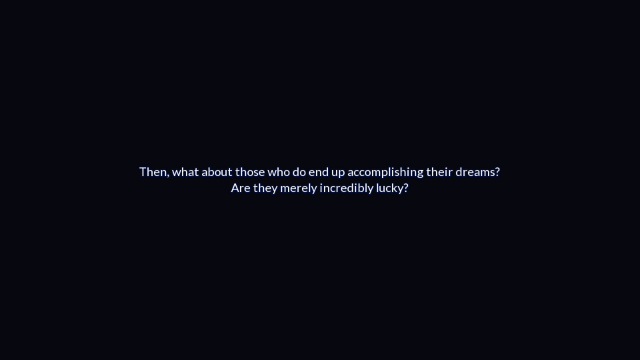 I could go on, but you get the idea.

Suddenly, I’m in a work room. Who am I? I don’t know who I am. What I do know is that ‘Dad’ is talking to me, repeating more or less the same stuff the gloomy text boxes just told me. 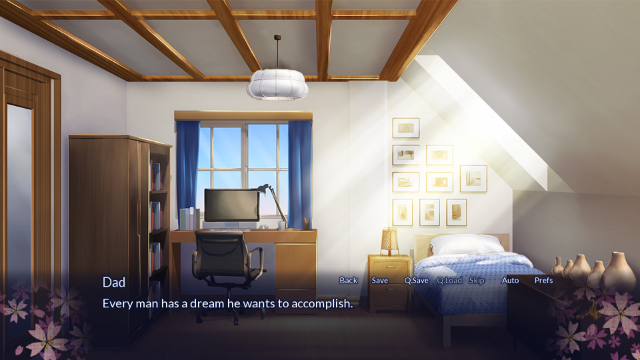 I quicksave. Hey, the option’s there. Flower Shop made me paranoid, okay!

More inspirational words from ‘Dad’. Then, protagonist-me starts talking to himself. Dreams are worth pursuing, you guys! That’s why…

‘Gushiken Takahiro’, huh? Given that this is a Japanese game, your call-name will probably be Takahiro. I’ma call you Gus.

Anyway: that’s why Gus, here, is a ’17-year old rising judo star’. He devoted his life to judo, as you do-do, and it’s all about to finally pay off! 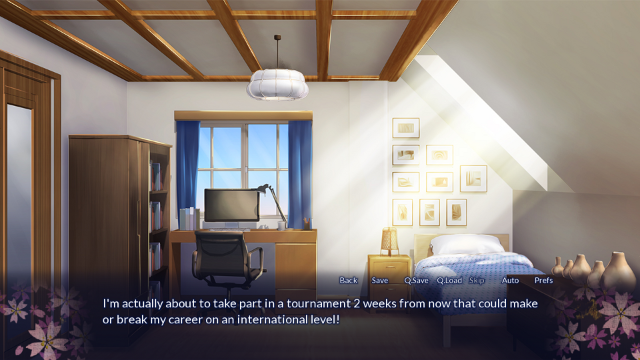 But, problem! Gus is worried. I mean, that’s not odd: he’s about to enter a make-or-break tournament, a once-in-a-lifetime opportunity. He’s probably been listening to Lose Yourself on repeat for weeks. But Gus isn’t just worried: he’s worried about being worried. And as a habitual stress consumer, I can tell you first-hand that that way lays madness.

Gus talks to some girl before going to school. ‘Koyomi’, I have no idea who she is. Nudity is implied, but not shown. From their banter, I’d assume Koyomi here is a potential date interest… except she’s not shown in the main menu. Sorry, Koy: I dub you Ancillary Character. 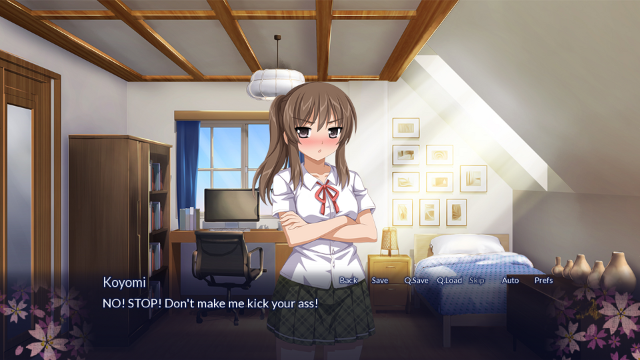 Nothing personal. You seem nice! But if you were important to the story, you’d have been on the box art.

Gus goes to school! If I know anything about Japanese games, it’s that schools are social hotspots, hotbeds for all kinds of activity, and it wouldn’t surprise me if the rest of the game used this school as its main staging point.

Ah, no, I see: Gus is hunting for some kind of shrine. Someone’s (hot) sister prayed at a random shrine in the random woods outside random town earlier, you see, and later on she had a lucky thing happen. Gus, a life-long martial arts trainee and physical master, decides that the best course of action would be to pray at this shrine. I want to tell Gus to buff up and stop feeling sorry for himself, but I haven’t actually been handed any controls yet.

Gus talks to his pervert friend. 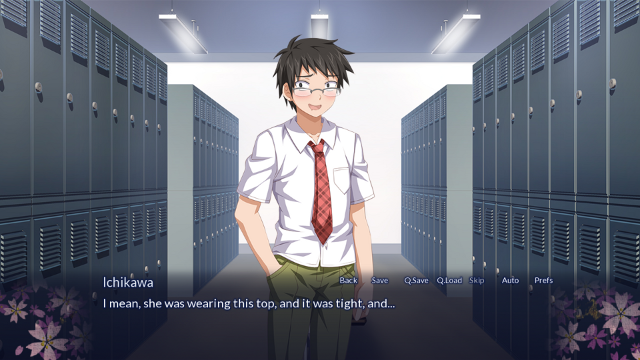 Key context: Pervert Friend here is talking about his own sister.

Gus goes up to the local temple-dojo, whatever, to talk to and spar with black-belt tomboy girl. 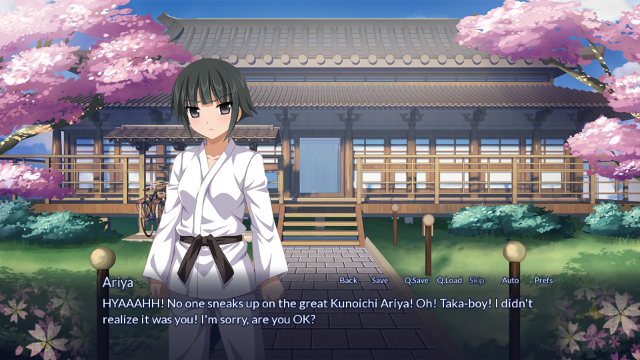 Not a Stark, but she’s wearing the black all the same.

Gus retrieves a map from Ariya, and enters the forest to look for the shrine. The map is needlessly cryptic, but he manages to find the shrine regardless. Without any input from me. Man, this seems like it’d have been an excellent time for input of some description! Maybe a fun maze minigame? But no, nothing.

Gus enters the shrine. He wonders, out loud, what the whole point of this kind of superstitious claptrap even is. Yes, after making the trek up. That’s when Gus realizes that the power to win his judo contest was inside him all along. Little bit of a ham-fisted moral, but eh. It works.

Or it would, were it not for the fact that the local shrine demon spirit takes something like offense at his callous skepticism.

Wait, hold on. What? 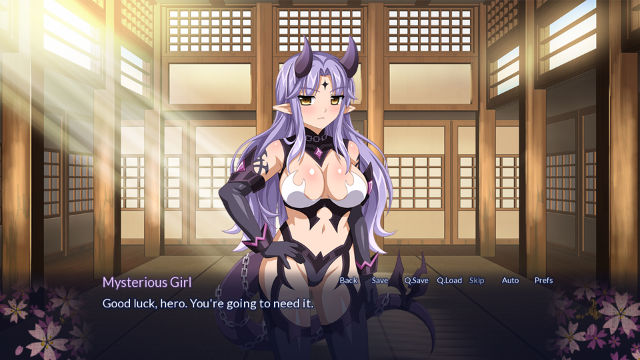 Suddenly, voices in the distance! Stern voices are yelling in anger! Playful sing-song voices are laughing! Gus is intrigued! So am I! Let’s head out! Exclamation marks are a good method of conveying excitement!

Gus makes his way over to the source of the commotion, and…

I cannot, for the life of me, describe the following scene in any way that doesn’t detract from it. So, without further ado: 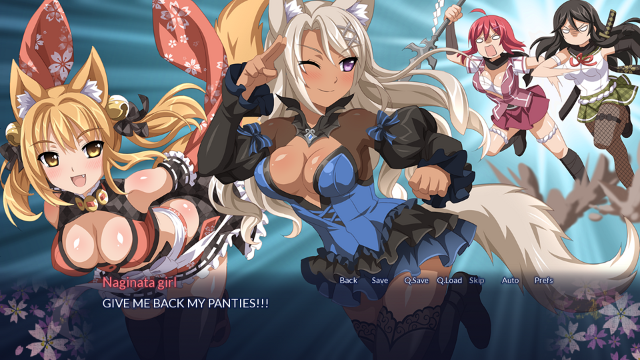 Make of this what you will. I’m as stumped as you are.

Okay, it’s like this: the two fox-eared girls have stolen the panties of the two angry, well-armed girls. Keen observers may also notice that these are the exact four girls that appear in the game’s title menu, so I’m going to assume this scene is important. Maybe I’ll even get to make an actual choice at some point?

The fox girls grow tired, for some reason. No, really, it’s played off all mysterious-like. The soldier girls catch up to them, and draw weapons, and quips about the wearing of panties are exchanged. Gus, a little concerned with the fact that actual Japanese melee weapons are being wielded, considers whether or not he should intervene. And in whose favour? Maybe, finally…

Nope, whoops, false alarm. The fox girls throw the panties at Gus’ face, and bail. The soldier girl with the naginata decides to attack Gus, so he deflects her attack with his ye olde judo skill. This works, briefly. Then he’s taken in anyway.

Gus is in jail! Gus is talking to the well-armed women, and to some old guy. Gus impersonates Phoenix Wright, and in doing so, actually convinces the incarcerating party not to kill him outright. 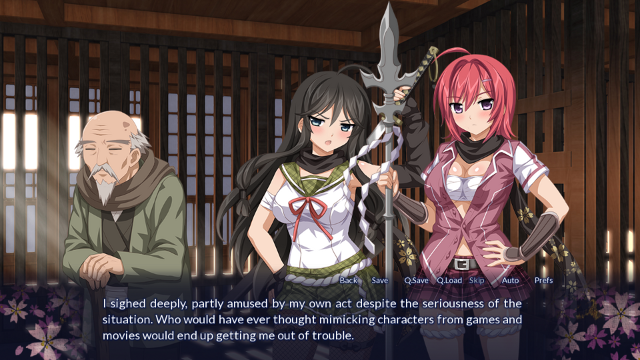 After the villagers leave, Gus gets some time to himself. And by ‘some time’, I mean, like ‘two seconds’. Because that’s how long it takes for the fox girls to show up and bust him out.

I don’t actually get a choice in this. Gus’ captives leave, fox girls show up, they break Gus out of jail, Gus leaves with them. Once again, this seems like it would have been an excellent spot for some gameplay decisions. Go with the fox girls, or stay in prison to prove your innocence? i.e. curry favor with the furry women, or with the LARP women? But nothing of the sort happens. So far, Sakura Spirit’s story has been a lot of rail, and not a whole lot of road.

Now, I have no idea how far into this game I am, currently. Could be I’m still in the opening. I haven’t seen any gameplay mechanics yet, and I haven’t been asked to make any choices yet… Sure, Flower Shop at least got the second part out of the way about ten dialogue slides in. But maybe Sakura Spirit is more of a slow-burning game?

Tell you what: I’m going to play ahead until I run into something that requires my input. Let’s see if I can pinpoint when, exactly, the story of Sakura Spirit starts meaningfully diverging as a result of your actions.