Plans change sometimes, reader. Initially, I was halfway planning to review some weird visual novel game about flower shops this week. Who knows, that might still happen next time! It had talking and anime characters and a main character named Steve, what more could I possibly want.

But then someone helpfully informed me that Costume Quest 2 was slated for release that week — I actually heard it came out on the day it came out — and that, as they say, was that. I was a big fan of Double Fine‘s previous Costume Quest, having written both about the base game and Grubbins On Ice on the Blue Screen of Yore, so ditching all my previous plans to finally get a Costume Quest article here on Ninja Blues seemed like the only logical step. And it was.

Candy! On the opening screen! Reviewing Costume Quest 2 is already the best decision I’ve made this week, and it’s only Tuesday. 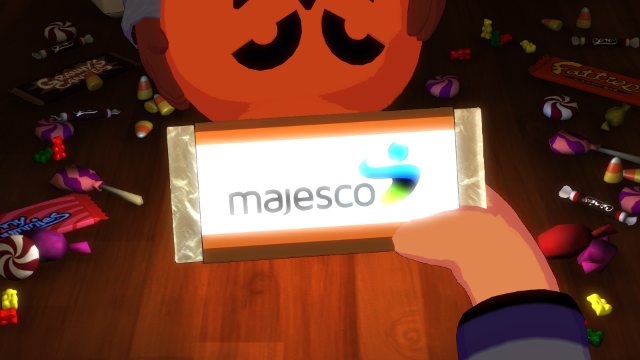 Nothing I do for the rest of this week will stack up against this.

Past the starting candy, Costume Quest 2 opens up on… a black field, and a whole bunch of spooky portals. Grubbins float in and out of the portals, helpless to alter their own fate, as the camera slowly pans down. There are a lot of spooky portals here, you guys.

Finally, we reach the — comparatively chromatic — bottom of the dark portal abyss. I’m left to my own devices for a second, wondering what I should be doing, but then! Out of one of the three largest portals currently in-view jump everyone’s favourite candy crusaders: Wren, Reynold, Everett and Lucy. 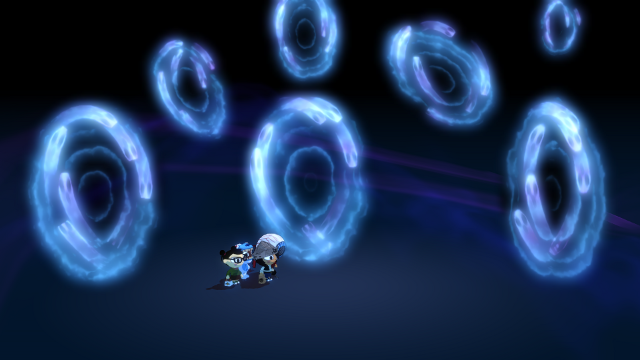 Still be-costumed from their last outing among the Grubbins On Ice. Literally so: this screen is a direct continuation of the end of the previous game.

Oh, wait, I’m in control! Doi hoi. Sorry, guys, I didn’t realize this was that kind of cutscene.

Except, it’s not a cutscene at all. It’s a menu. The three big portals represent three major menu branches: Exit Game, Options, and ‘Mysterious Portal’. 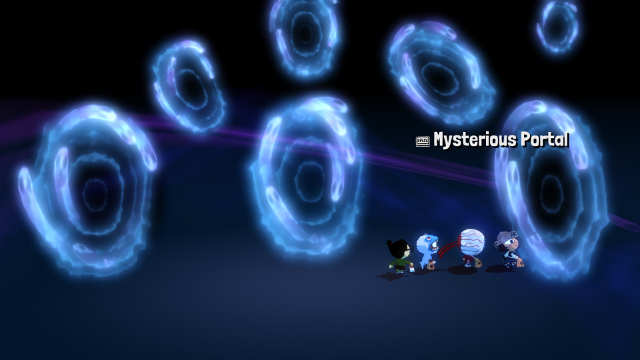 I don’t know why this portal is so much more ‘mysterious’ than the others, but what the hey.

Costume Quest 2’s options are, in a word, sparse. There is a four-page How-to-Play that I read, not out of a desire to get actual information, but out of spite: I’ll have forgotten everything this booklet said by the time the game proper starts. Audio and Video options are rolled into a single, small menu, with only a handful of sliders and a resolution box. And the controls ‘menu’ shows only a picture of an Xbox controller, despite the fact that mine isn’t even plugged in. 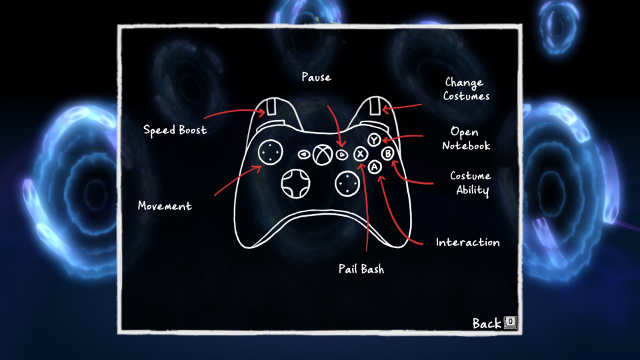 Despite the fact that the button prompts shown are for a keyboard, I couldn’t find any kind of keyboard controls overview.

Not a great start to any game. But, you know, whatever: Costume Quest 1 has built up enough positive affect with me that I’m willing to let this slide for the time being. Let’s check out what that Mysterious Portal is all about!

In front of the portal, Wren and Reynold argue. As they do. In amusing contrast to the previous game, the argument this time is about who will not be the leader: given that this portal is pretty scary, both siblings make some good cases for the other one going through first.

Lucy and Everett flip a coin, bungle it, and just sort of pick someone. And when I say theypick someone, I of course mean I pick someone. Hmm, let’s see… who do I want to be. 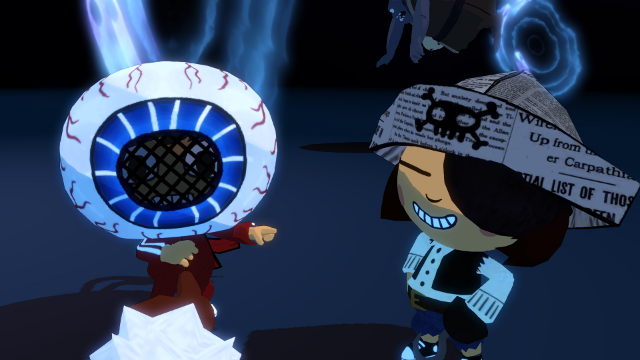 It is my strong belief that there are two kinds of Costume Quest players in the world: people who understand that Reynold is the superior choice to Wren *every time*, and people who are *flat-out wrong*.

Wren pushes Reynold through the portal! There’s a flash, the screen shifts, and… 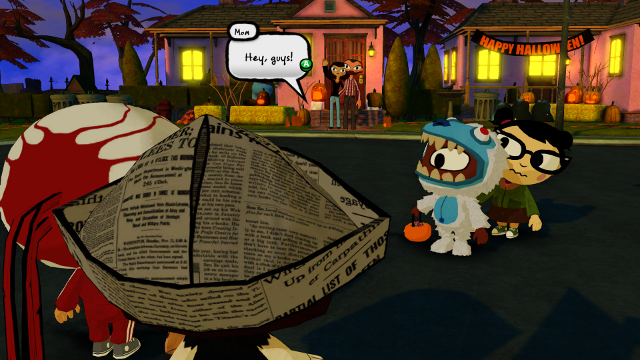 Hey, mom and dad! Thanks for putting me in charge that one time! Sorry we’ve been gone for *years*!

Wasn’t it Christmas when Grubbins on Ice took place, though? Lucy’s explanation boils down to ‘something, something, quantum time effects’, which I interpret as game shorthand for ‘it’s Halloween now, again, don’t worry about it too much’.

The party splits. Lucy and Everett leave, while I steer Wren and Reynold towards their parents. Time dilation or no, they’ve probably been wondering where we were! 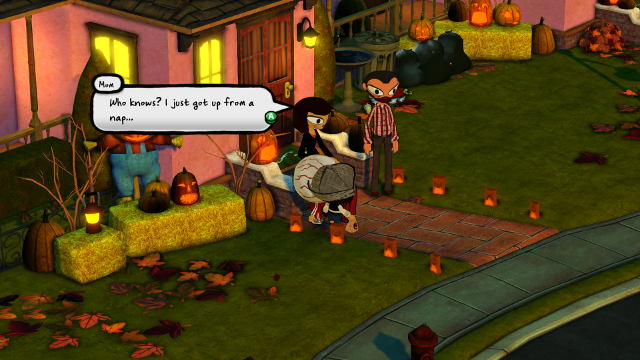 Or maybe mom just slept for, like, three whole seasons.

I walk around the block some. It’s… it’s more or less exactly the same neighbourhood from Costume Quest 1, isn’t it? It certainly feels familiar. I run around, talk to people, and whack breakable things with my candy pail, and it’s like I never left in the first place.

Anyway, long story short: I run in on a creepy dentist meeting up with a TIME WIZARD, capitalized like that. 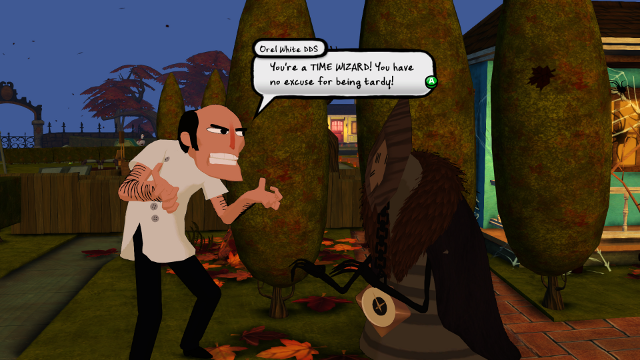 I don’t know why nobody else seems to be noticing this.

The dentist and the TIME WIZARD do some weird spooky stuff, and suddenly everything goes to hell: Repugnians appear, my costumes and candy pails vanish, and Halloween as a whole just sort of… stops. 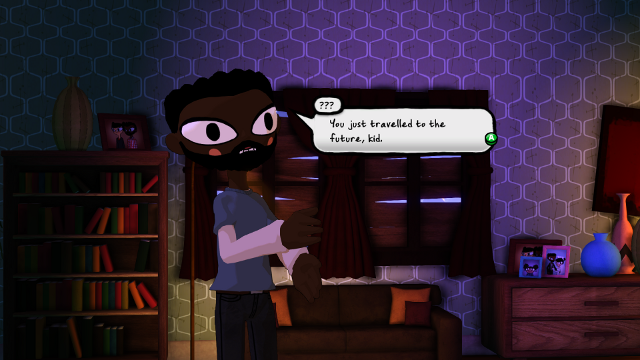 Hilariously, the dialogue that follows seems to imply I’m not supposed to see that these characters are Older Everett and Older Lucy. Who got together, married, had a kid, and then started dabbling in time travel. Even though that’s exactly what we all knew they would do.

Everett sends us out into the Future Shed, to get costumes. It serves as a nice visual introduction to just how futuristic this future is. 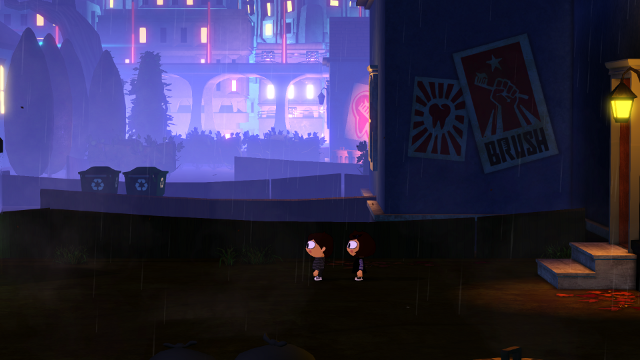 It’s so futuristic, you guys. *Look at all that blue*.

I find two costumes in the shed! Reynold, the fearless leader, equips a superhero costume! While Wren gets… that goddamn garbage candy corn costume from the last game, are you freaking kidding me. 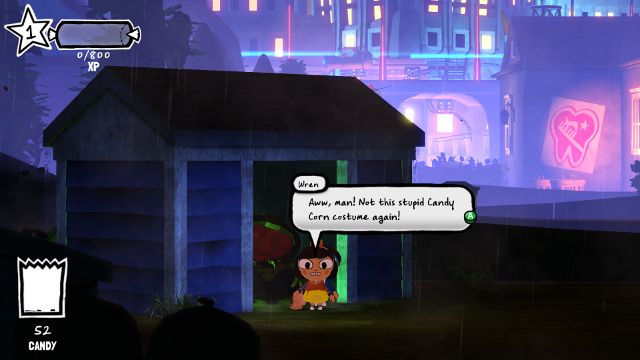 I thought we all agreed to never mention that costume again!

On my way back in, I get spotted by a flying robot with… giant teeth? It babbles something about costume violations before being destroyed by a giant raven ninja with a cybernetic eye.

This segues into a combat tutorial. 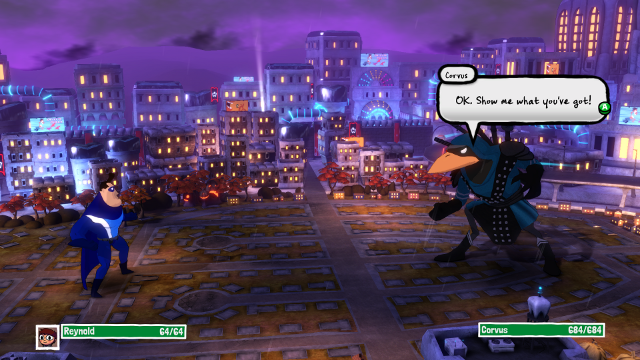 I’m actually okay with not stopping to question any of this. It works, okay?

As in the previous game, the premise of Costume Quest 2’s combat is that the kids transform into giant, exaggerated versions of the costumes they’re wearing. That’s why Reynold is currently looking like a blue version of the Crimson Chin, and why Wren is… not here, I guess. Maybe the Candy Corn costume is too garbage? Even though the last game had a French fry costume that turned into a giant monster?

In a brief practice round, Corvus the giant raven introduces me to Costume Quest 2’s combat. It seems, again, highly similar to Costume Quest 1: simple turn-based combat, my-team-goes-then-their-team-goes, predicated mostly on doing basic attacks over and over, using timed button presses to enhance attacks and blocks, and doing special high-power attacks whenever a certain meter is maxed out. 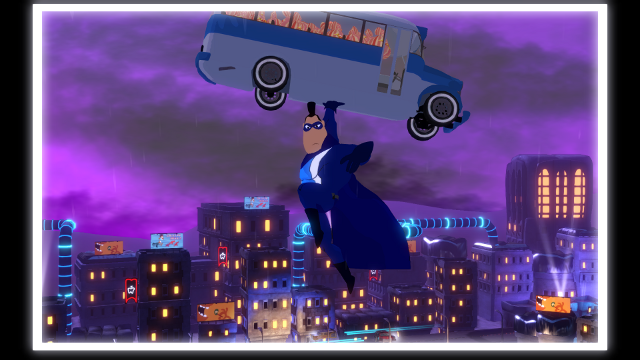 For instance: throwing a bus full of giant lollipops at someone.

After I finish the tutorial fights, some more story things happen. I don’t want to spoil too much, but let’s just say that I’m in a swamp in the past now. 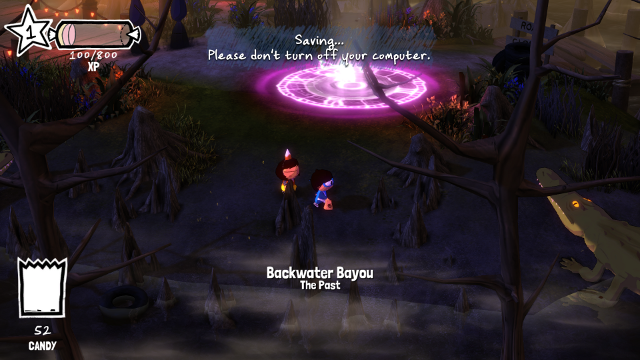 I don’t know where in America Costume Quest supposedly plays out, but add one notch for Louisiana as a potential.

The swamp is populated with alligators, kid version of the adults I know from the present, and sentient shards of the TIME WIZARD I saw, hunting around for some amulet. The latter are not friendly, and I fight them a lot. 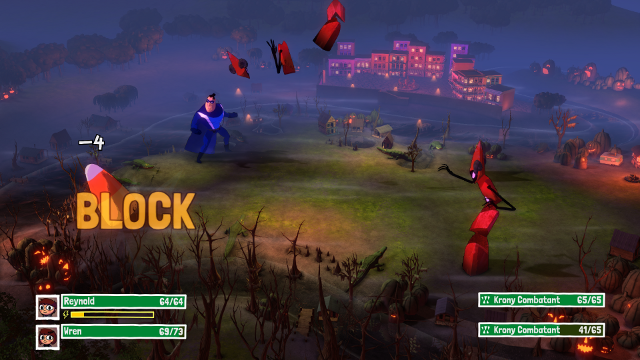 It conspires that the Candy Corn costumes *can* contribute!

Okay, so. I’m in the past. I’m trying to find some sort of magical amulet before the TIME WIZARD and the evil dentist can. In order to do that, I have to get to their swamp bog. A skeleton kid has a boat that can help me out… but he wants loads of candy in return. And while I don’t have that candy yet, it is Halloween night. 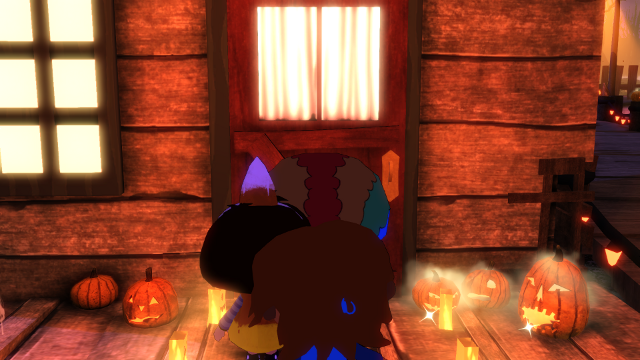 Trick-or-treating! Of course it would boil down to this.

I’m dozens of paragraphs into this review already, and it feels like Costume Quest 2 is only now getting started. Trick-or-treating at every house, gathering candy, fighting evil monsters with a swamp kid called Monty and his frankly terrifying clown costume. 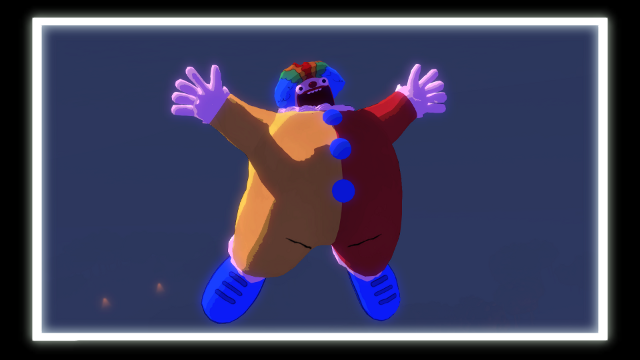 I can keep talking about Costume Quest 2 as it happens, but I think it’s probably better if I just play a little bit first: find the witches, rescue the amulet, maybe get some more cool costumes? Check back in on the next page and I should have some more coherent thoughts for you.