So it turns out my earlier worrisome optimism was a little unfounded. Concursion actually offers five different worlds to play in: aside from the medieval world, ninja world, jetpack world and space-shooter world, there’s also a top-down world with a dot-collecting mechanic that I literally cannot describe without invoking the phrase ‘Pac-Man’. 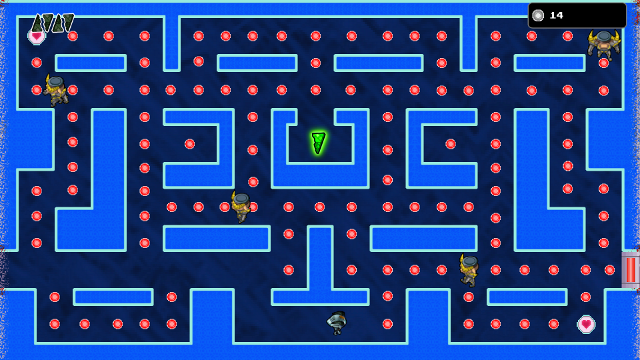 Regardless of overoptimistic expectations — I would have liked to see a thousand worlds in a thousand levels, but alas — Concursion grabbed my focus pretty well at the beginning, there. While this hook of world- and genre-switching isn’t totally new, it’s still under-done enough that I was quite interested in seeing where this game could take the conceit narratively and mechanically.

And then, over the course of the first world, that interest just sort of… petered out, I guess. 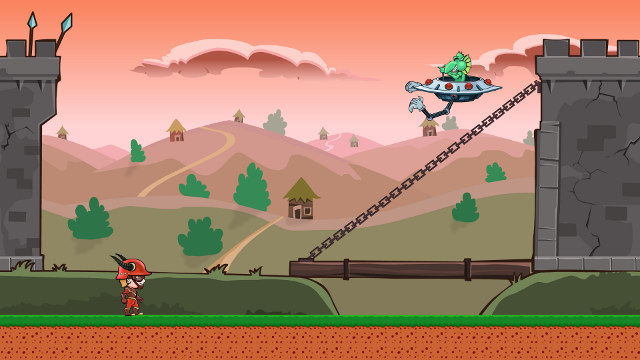 Never have I been this uninterested in facing an antagonist.

Try though I did, I couldn’t get myself to like Concursion very much. My general experience with it was… well, rather dull. Lackluster, if you want. While Concursion has smart ideas and highlights, those highlights are few and few between in an otherwise middle-of-the-road game. It kept me going up until the point where my optimism about its ideas was surpassed by my general boredom for the presentation. And then, it rapidly lost me.

The thing is, Concursion actually starts off pretty strong. It introduces the world-switching mechanic and its five principal worlds in a series of levels that allow you to play around in each, getting a feel for the controls and the constraints and teaching you what to expect with regard to enemies and challenges.

The five worlds all represent different genres of gameplay. The medieval fantasy world is the most traditional ‘platformer’ one, with controls limited to sprinting and jumping and challenges involving long chasms and enemy heads to boop. The ninja world is more of an action-platformer, with wall-jumping and directional sword slashes the order of the day. The ‘moon’ world involves gravity- and thrust-based platforming, with you moving not under your own power, but only by steering a jetpack. And obviously, the space and Pac-man worlds are, respectively, a 2D space shooter and Pac-man. 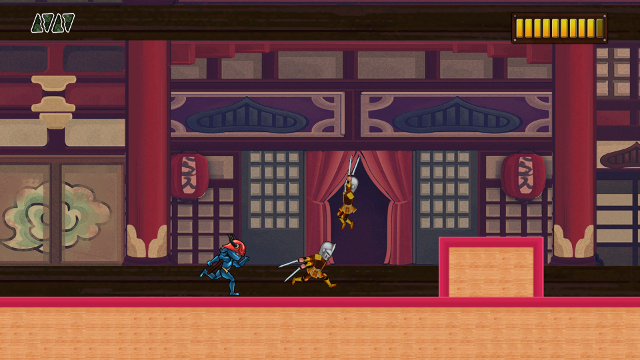 Enough about those, though, let’s get back to the ninjas.

After the initial ‘basic’ world introductions, Concursion gets creative. Pretty quickly, levels no longer simply ‘fade’ into each other. Rather, analogue to the space portal circles I got so confused about on the previous page, certain areas of the screen belong to certain game worlds.

Sometimes, this takes the shape of… well, those exact circular portals. For instance, here I am in ninja world, about to jump into a moon world part of the level. 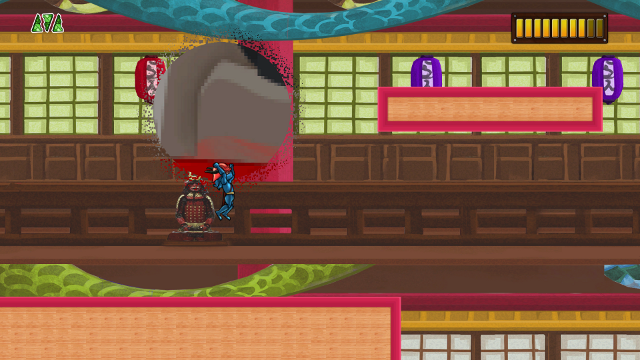 I was a hater. I had it coming.

Sometimes, levels are divided into different horizontal or vertical strips of world. So you can be running in a fantasy world setting, hopping onto lizard heads, while ten feet about you, tiny spaceships fight a battle for the future. 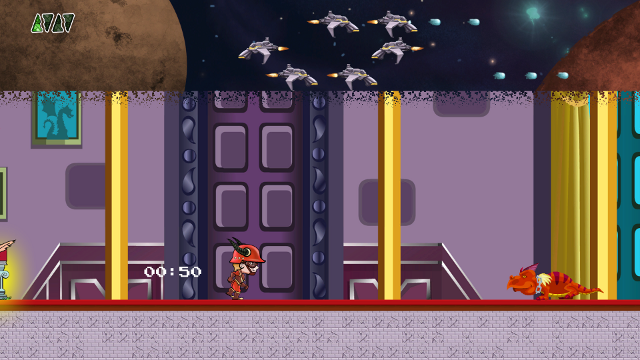 Pro tip: do not jump into their battle for the future. It won’t end well.

And sometimes, things just get weird. 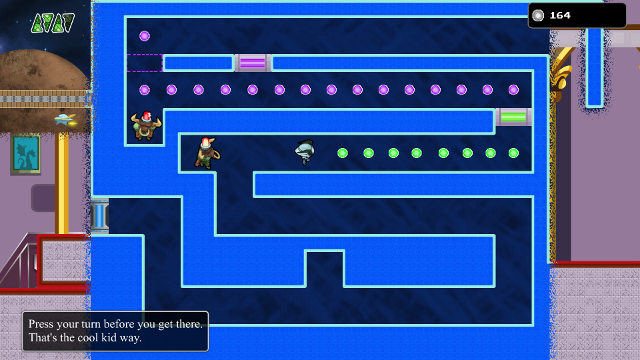 ‘We interrupt our regularly scheduled fantasy/space world mashup to bring you: Pac-man!’

Whenever worlds collide, Concursion is not afraid to use its changing rule sets to good effect. Ninja Hero has double jump, so bubbles of ninja world space allow for small areas of by-necessity precision platforming. Fantasy Hero can sprint, and jumps really highly when he’s sprinting. Moon Hero has that jetpack. You can probably imagine how puzzles could be built around this interplay of sets of mechanics.

I think my favourite lateral-thinking moment Concursion required of me is captured in this screenshot: 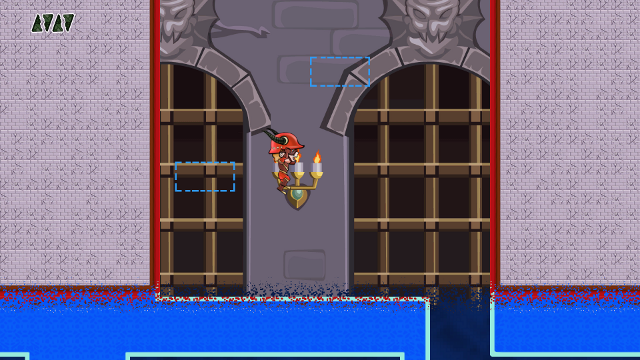 In this level, you start off high in fantasy world. There are these odd platform outlines dotted around, something you haven’t seen before in this context. You need the platforms they hint at to get to a gem shard, but how? So, you jump down, into Pac world.

In Pac world, you collect several colours of dots. Collect all the dots of a certain colour, and the doors corresponding to that colour open up. 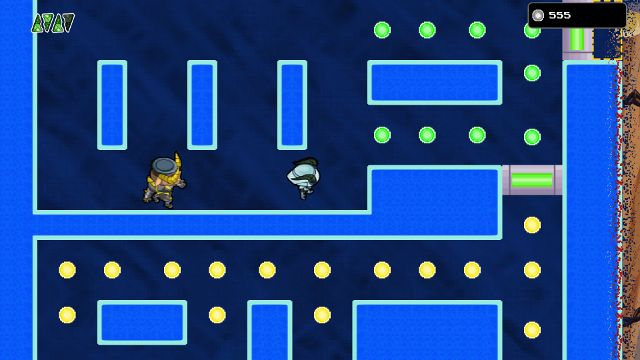 Door open up… or close back down. And ‘opened’ doors, which simply vanish, are indicated by a dotted outline. 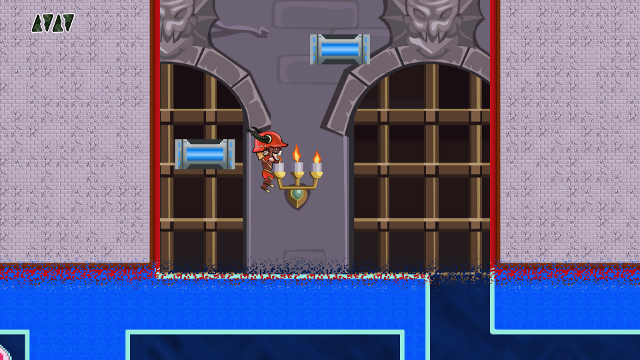 This kind of cross-world thinking is easily Concursion’s strongest gameplay element. It gets even stronger when enemy switching is introduced: enemies from one world can cross the dotted-line barriers too, changing into a corresponding enemy from the new world. Walking lizards become simple space ships become running samurai become walking lizards, that kind of idea.

It’s a clever mechanic that, again, is used to good effect in a few of the puzzles. In fantasy world, for instance, there’s an enemy that is basically an unkillable homing ball of spikes. You can’t defeat it, you can’t outrun it, and you can’t ignore it…

…but you can lure it into moon world, where it turns into its equivalent enemy: a timed tracking mine. Avoid that enemy for eight seconds, and it blows up… ridding you of the homing spike ball once and for all. 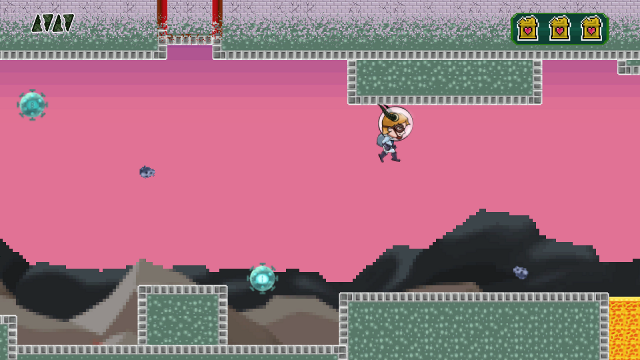 Its last words were ‘wait, how am I suddenly an inanimate object?’

That same spike ball, in space world, becomes a simple linear asteroid. So can you figure out the enemy type interplay in this scenario? 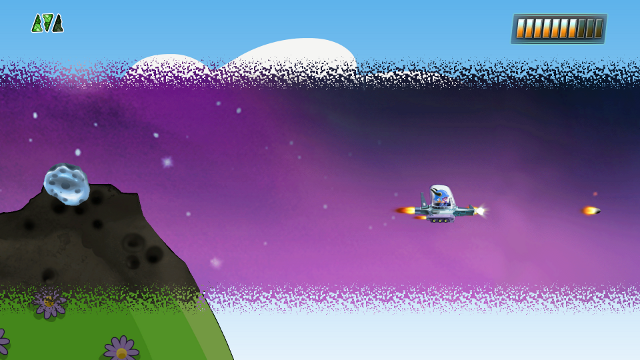 This *will* be on the test.

I could go on, but you get the point: Concursion has some pretty clever ideas about world switching, particularly with regard to mechanical changes and enemy behaviours.

Unfortunately, those clever ideas aren’t really enough to carry it.

Concursion’s greatest strength lies in the puzzles and situations that make full use of its world-switching mechanic. It’s almost appropriate, then, that its greatest weakness lies in all the parts that don’t. Because while the mix-‘n-match gameplay is fairly entertaining, the reality is that each of the individual worlds and game modes that make up Concursion aren’t particularly good by themselves.

Fantasy world is the most basic type of Mario-clone platformer there is: jumping, and jumping on enemies’ heads. Even the first Mario game had more going on than that! Ninja world’s ‘combat’ gameplay is nothing more than unsatisfying slashing that blinks enemies out of existence. Space world shooting gameplay is similarly bare-bones: no powerups, no smart bombs, no interesting enemies, nothing. Moon world’s gravity gameplay is functional, but so simple that it’s almost devoid of challenge. And Pac world’s enemies are a joke, predictable path-followers and timed bullets that fade out after seconds.

Every individual world is just… bland. This is not so much a problem in levels where rapid world-switching is the general theme, but for every level that does that, there’s a level where you spend extended portions of play time locked in a singular reality. 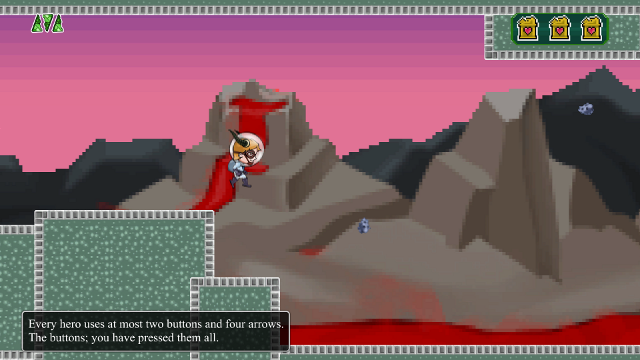 It’s perhaps telling that the area 1 boss, the only boss I actually got to, takes place entirely within fantasy world. Also, it’s equally telling that he’s a massive time-sink.

Seriously, screw this guy so much.

Picture this: first, the boss throws a mess of bombs around, for like fifteen seconds. Then, he flies over you and does a drop-down charge attack. Then, he flies off-screen, taunts you, lowers his shield, and rushes you. You can jump on his head and damage him this way.

You have to repeat this sequence five times. Without getting hit more than once throughout the entire thing. Five. There’s nothing insightful about it, or clever; there is no testing of learned mechanics, or even adoption of new ones. It’s just rote twitch behaviour that goes on for far longer than it needs to.

The first boss in and by itself wasn’t enough to drive me off the game, though. I was still on-board with the fun parts enough to continue into the second world. But there, three-or-so levels in…

So I’d been playing this game on Hardcore difficulty for the most part. I considered switching back once or twice, but Concursion is really adamant about that you should maybe think that through. 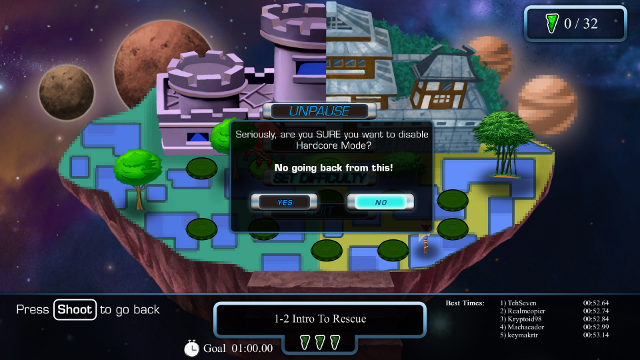 “My father will be disappointed, I know this. But I must press on.”

But then I got into this really long level. Lots of puzzles, enemies, reality switching, the works. And, I don’t think I’ve mentioned this, but your hero in Concursion is fragile. It only takes a few hits to kill you, depending on the world you’re in, damage tracks across realities, and health pickups are scarce.

I tried getting through it on Hardcore, but it just… it wasn’t going to work. I tried, and I tried, but the more I died, the more I started feeling defeated, and tired, and just sick of it. So, I switched from Hardcore mode to Normal mode. And do you know what changed?

Okay, that’s not entirely fair: Normal mode gave me one checkpoint I wouldn’t otherwise have gotten. But beyond that, everything remained the same: enemy amount, enemy placement, enemy strength, obstacles, health pickups, everything. The puzzles were still as obstinately difficult to get through as before, the enemies still as unfair, and the gem shards still as tauntingly unreachable.

I started wondering, then. “Do I really want to go for all the gem shards on this level?” I’d gone for full completion every level before, but… hey, wait a minute. Why am I collecting these gem shards, anyway? They don’t seem to do much of anything. They don’t unlock levels, they don’t give me upgrades, there’s no score to speak of. Why do I have to do all this shit?

And that’s what I did.

Concursion is a bit of a… conflicting game, for me. I really like the ideas it puts forward, and I admire its willingness to experiment. When I was writing the positive paragraphs about how well the world switching and enemy variation work, I honestly had to stop to reflect once or twice. “Hold on, why did I dislike this game the way I did again?”

But then, as I started on the more negative-slanted stuff…

Concursion is a game that tries to craft great ideas out of mediocre building blocks. As long as it’s the ideas themselves that you are focused on, it looks great! Looking at the Steam trailer, I can see that later levels introduce more and more elaborate world-switching mechanics… so who knows. It might be a diamond in the rough. And if the constituent elements’ meh-ness doesn’t bother you too much, it just might turn out to be a really fun game for you.

For me? At some point, I lost the ability to see the forest for the trees. And in Concursion’s case, the trees just aren’t all that much to look at. 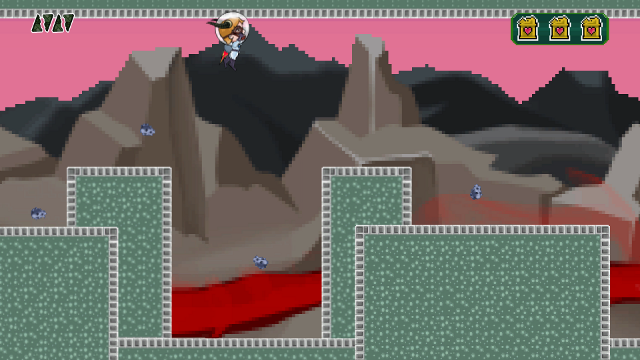 If you’re interested in playing Concursion for yourself, it’s currently ten bucks on Steam.

UPDATE: And, as reader Stratoshred has pointed out in the comments, there is a Steam demo as well. Apologies for missing that the first time around!

Jarenth wanted to like this game more than he actually did, and that’s always a sad occasion. Help him feel better on Twitter or Steam. Or even Ello, if you’re so inclined.