The world is full of seemingly mind-baffling mysteries, sometimes. Why do we drive in a parkway and park in a driveway? Why do snowmen wear scarves and hats, even if the heat retention those provide brings them that much closer to melting? What is updog? And what in the devil is a ‘Concursion‘? Conundrums like this are what provide much-needed flavour to our ever-spinning universe.

Human curiosity being what it is, however, the world is also full of dull, functional answers: bringing the mysterious down to the mundane is the human condition in a nutshell. To wit: ‘because the words involved have different etymological roots’, ‘because they want to, regardless of consequences’, ‘a play on words you can use to fool your friends’, and ‘a ‘multi-genre’ platforming game of sorts developed by Puuba‘. Sorry, universal flavour: I’m a scientist. I solve the riddles of life and everything so other people won’t ‘have’ to.

Anyway: Concursion. It’s a video game. I’m curious. Are you curious? I’m curious. Let’s go see what all the hub-bub is about!

This is Concursion’s title menu. I’ll give you a minute to take it all in. 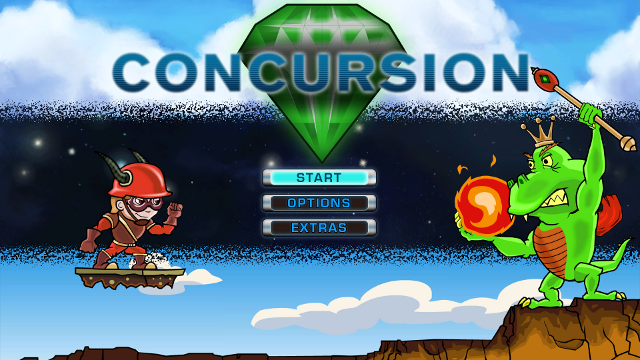 It’s definitely *something*, isn’t it?

Will Concursion be about the journey of a red-clad guy with weird headgear, setting out to defeat the evil fire-throwing lizard king by jumping on his head? Only time can tell, but I’m leaning towards ‘probably yes’ for now.

I can’t exactly tell you why, but something about this graphical style puts me in defense mode. It’s weird. I’ve covered hundreds of indie games over the years, and ‘indie’ games, here and on defunct-BSoA, but for some reason I always shy away from stuff like this. I honestly don’t know why! It’s almost like my brain interprets these levels of production value and graphical style as warning signs. Steer clear, they say. This game is too indie. You can’t handle this level of indie.

2 Indie 2 Handle. I should probably lock down the movie rights for that one.

Jokery aside, Concursion’s menu is mostly fine. A little light on the options side: you don’t get to pick any resolutions, but you can pick one of three screen sizes! And you can have fullscreen on, or off! Similarly, audio is two sliders, and controls are represented by two ‘quick sets’ of six keys each. Oddly, the key bindings can be changed… but only by adding to them. As far as I can tell, you can’t actually remove or change the pre-assigned keys.

The Extras menu holds bios for the characters and enemies that inhabit this fantasy epic. Like, for instance, ‘Darklord Bigandbad’. 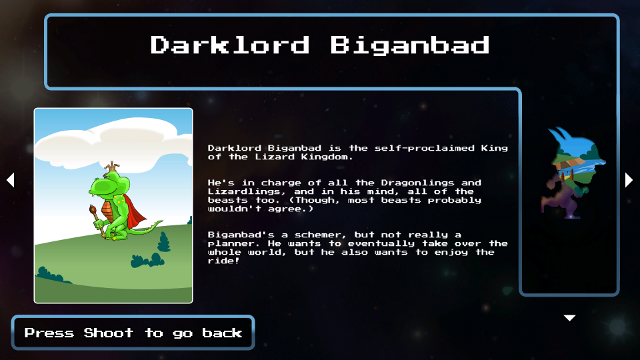 I swear I’m not making any of this stuff up.

As you can see, I have relatively little reason to hang out in the menu for any length of time. New Game, ho!

I get to pick one of three profiles. One is the spiky-helmeted hero, one is (sigh) Darklord Bigandbad, and one is a moe-looking knight of some description. I’ma be the latter, in the vain hope that I can actually play as her. She looks neat.

Difficulty options are either Normal or Hardcore. ‘For experienced platformer players’. Game, I’ve been covering indie games for almost four years now. I like to think I’ve seen my fair share of platformers, at this point. 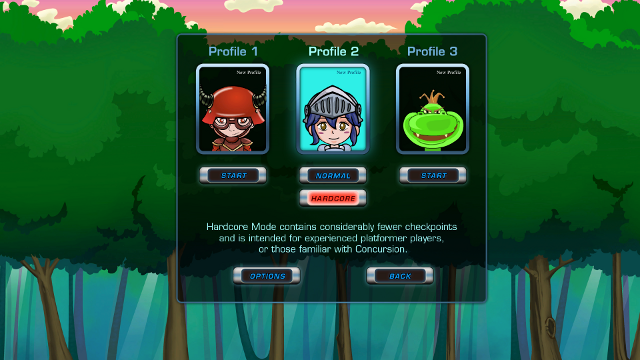 Seriously, though, can I be Moe Knight?

I can’t decide if the cutscene that follows is a masterwork of parody, or unintentionally straight-spun nonsense. Readers, take this journey with me.

The scene opens up on Princess Honeybluff, a fresh breath of pink in her entirely pink throne room. She’s just kinda… standing around there, I guess. 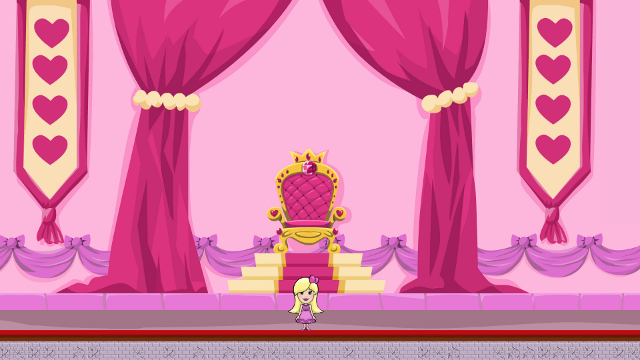 Suddenly, entrance stage right, Darklord Bigandbad enters! He casually walks up to the princess, slings her over his shoulder, and walks off. 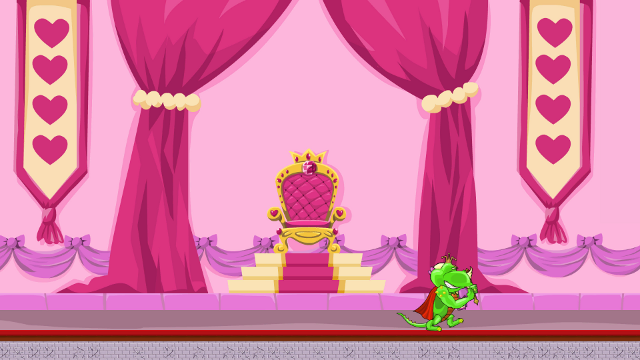 In fairness, this is probably how a successful kidnapping would actually go.

Moe Knight — am I actually her? — and two random pink goblins set off in hot pursuit. They follow the lizard man through the throne room, into a random forest, and past a barbarian village of some description.

Then, suddenly… green crystal shards start raining out of the sky? And random circles appear on the map, showing different sets of background texture from the background texture previously on display. This is… I don’t really know what’s happening?

Neither does Moe Knight, obviously: from off-screen, she — casually — asks for someone to come help. 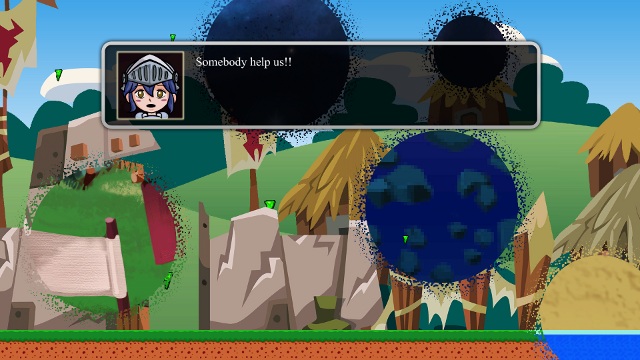 Believe in yourself, Moe Knight! You don’t need *anyone’s* help!

And that is where my story begins. 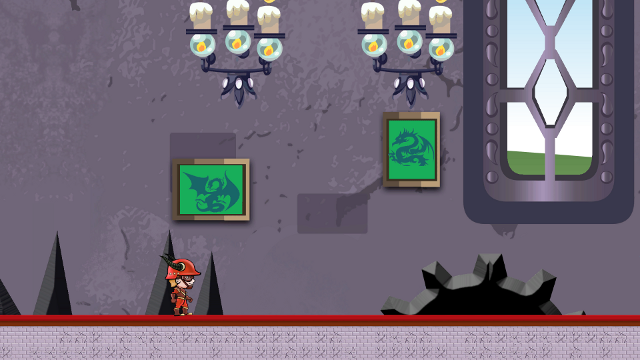 I guess I’m this guy after all.

Alright, whadda we got? Arrows and WASD walk… left and right, so it’s more like ‘two arrows and AD’. X jumps. Holding down Z sprints. Those are all the buttons I have. Let’s do this. 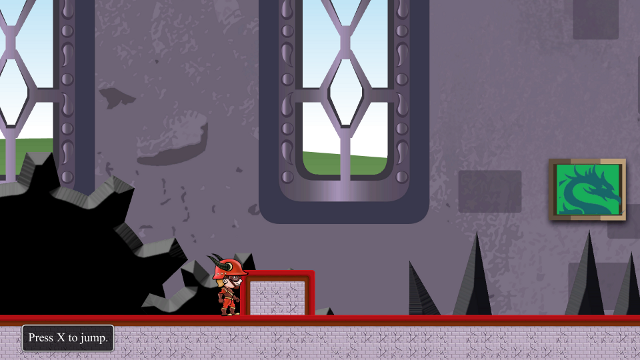 Horn-hat hero-me walks, runs and jumps through an empty hallway. Riveting. I dig the dragon-themed paintings, but I was expecting a little more… 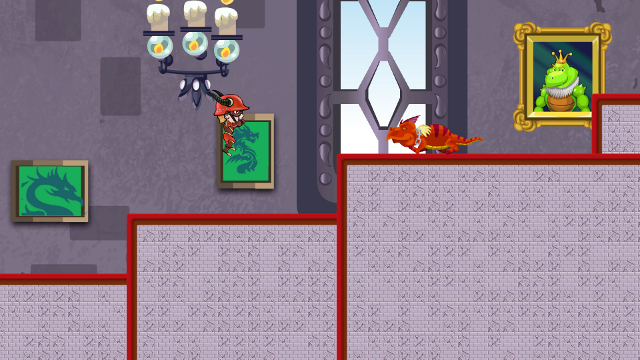 Casually sauntering lizard enemy, eh? I pounce on its head, and it fades into nonexistence without as much as a grunt. That’s what you get for opposing me, lizard!

Slightly further on, I meet some heavily be-eyebrow’d cannonballs. I am unsure what to make of them. 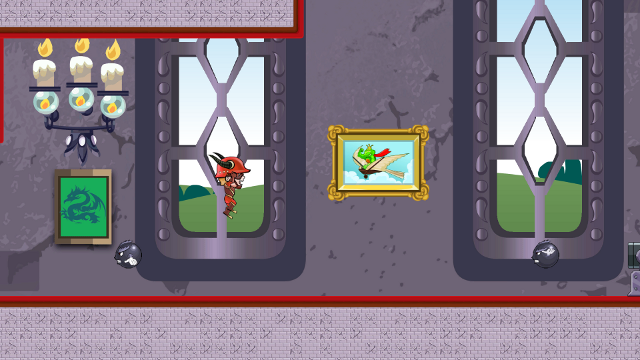 This will, in fact, be the only time I ever comment on how weird they look.

Finally, after 47.85 seconds — I counted! — I reach Bigandbad’s throne. He’s!… not here, actually. There is, however, a note from Moe Knight, informing me that the world is ending or some oddness. I can’t really make heads or tails of it, but the gist seems to be: make your way back to the castle you started from, collect Gem Fragments.

Well, er. Collecting things, I can do that. But why is ‘get back to the castle you were just in’ posed as a problem? Can’t I just, you know, walk back in a straight line? We jumped on everyone in our path on the way in, how hard can it be to get back?

I walk outside to find that the world has gone to space. 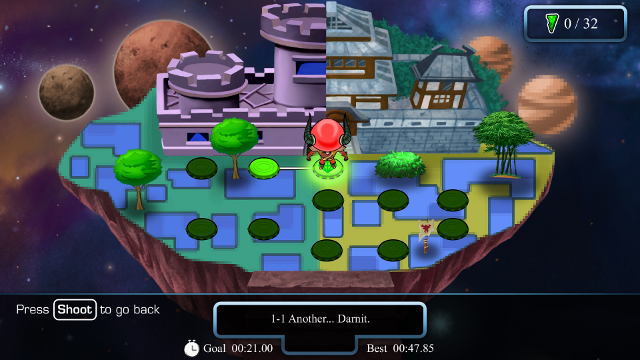 O…kay. Okay, I still have no idea what is going on. This isn’t normal, I guess? The main conceit of this universe is not that everything’s floating on space rocks?

Okay, you know what? Tackling this weirdness one thing at a time. I move to bottle cap-level 1.2, and get ready to platform my way through whatever I find there.

What I find there, it turns out, is a castle not unlike the one I was just in. Two things are different, though. One, at various points in the level, I find some of the green shards that rained down during the introduction. As there is now a gauge for them in the upper left corner of the screen, I guess I’m supposed to be collecting these things. 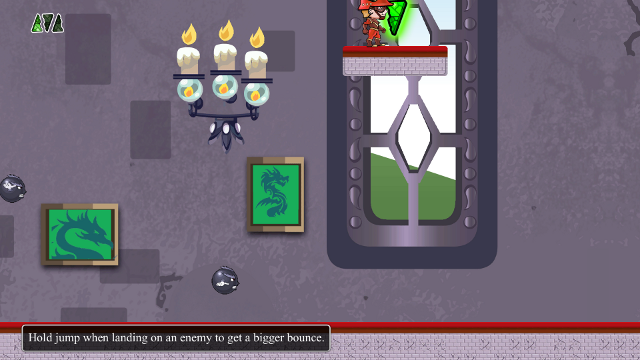 I’m collecting them because they’re *there*. You all know how this genre works.

And two, at various places in the castle, I can see more of the background-distorting circles. Turns out they’re portals. Into space. I can tell, because of the space ships that are flying inside them. 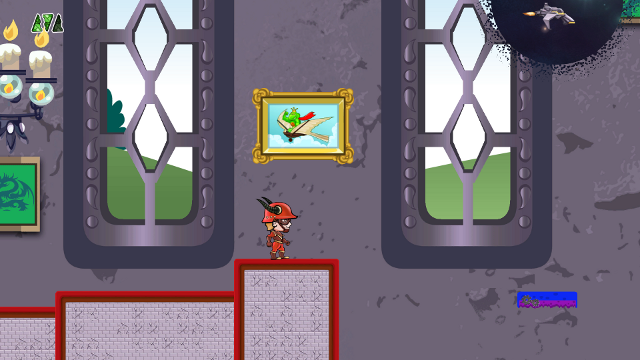 Sure, you know what? I’m choosing not to question the logistics here.

Second level’s harder than the first: I can only take two hits before falling over and dying, and there don’t appear to be any checkpoints in this level? If there are, I must be missing them: every time I die, it’s back to the beginning. And nothing is tracked beyond death.

Nevertheless, I manage to make it to the end of the castle. And when I say ‘the end’, I mean… 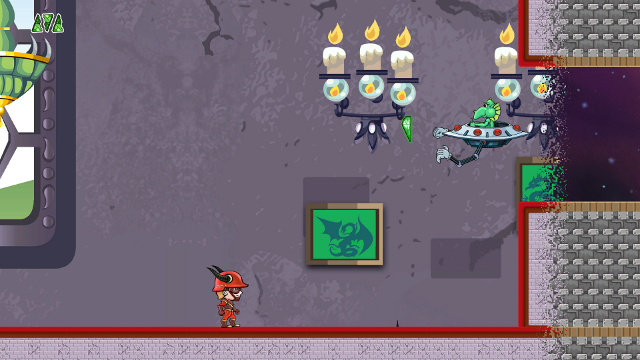 It brags to me about its boss’ secret plan, blah blah blah, gem shards, blowing up the world, I don’t even know. Then it turns around and leaves, fleeing through the corridor into space right behind it.

And turn into a spaceship in the process. 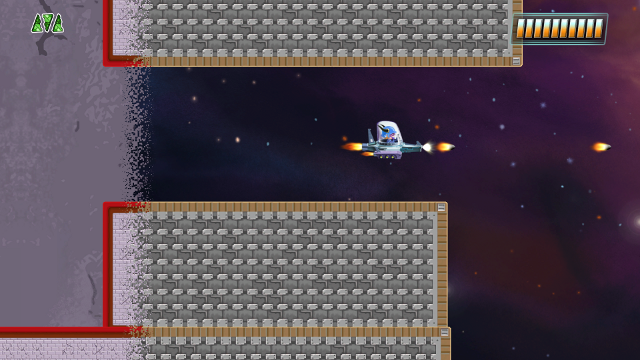 Suddenly, I’m flying through space. Arrows and WASD now move me in all cardinal directions. X fires forward rockets. What in the…

Before I have time to adjust, I apparently fly my spaceship into the disco dimension. This ends the level. 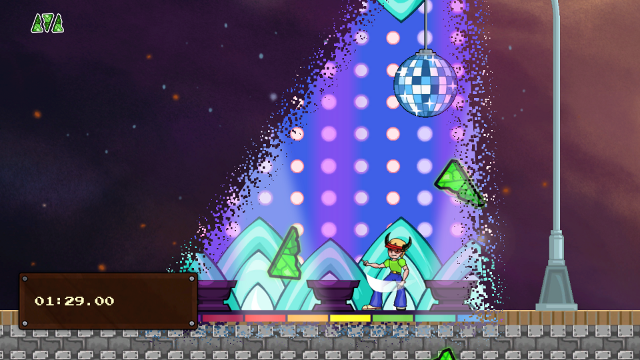 With a dance party.

I’m given plenty of time to adapt to these new space controls, though, as level 1.3 starts me off in this condition. I am now space shooter hero. Which, sure, whatever. I can deal with this. 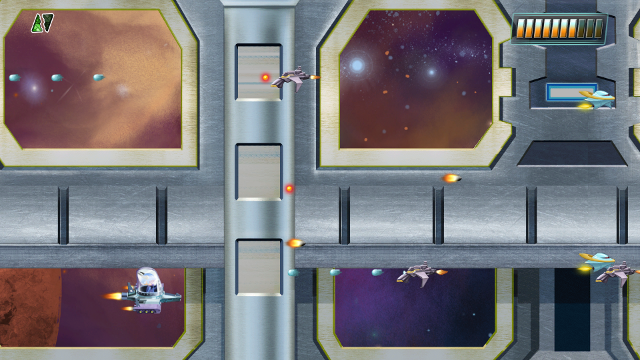 ‘I stomp on lizards. I can get used to this, too.’

But then the world shifts again, and now I’m a ninja. 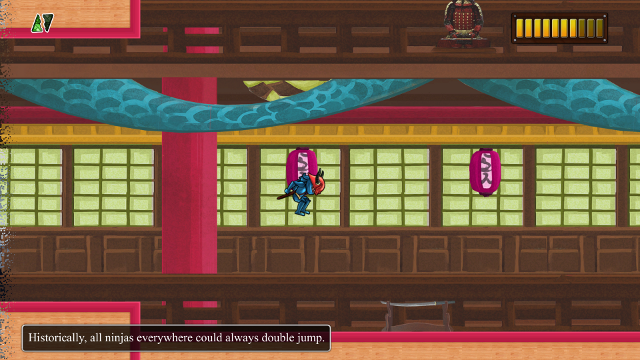 Who occasionally wears a breathing helmet and a jetpack. 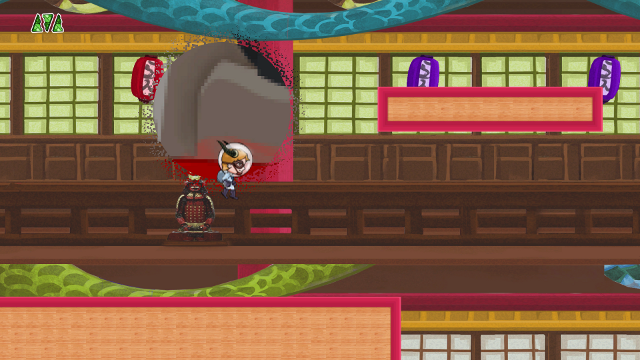 And… shrinks in size?

Okay, I should probably.. play a little more of this game, before going on. If I continue on now, the rest of this review is just going to be ‘and then I became this, and that, and that’ for however many pages it takes for me to get through ’em all. Tune back in when I’ve gained a little more oversight!