“Oh, hey, a new Double Fine game on the Steam store page. Neat! I’ve covered most of their work in the past, and they’re pretty consistently high-quality, so that’ll save me the effort of having to think about which game I’m doing today.”

“Apparently it’s called… Hack ‘n’ Slash? Is that right? And it’s a game about… it kinda looks like a Zelda-esque game where you… hack… the gameworld? Like, actually change variables and stuff? Huh, that does sound interesting. It’s a little pricey, but what the hey. Double Fine haven’t steered me wrong before.”

Yes, readers: sometimes all the thought processes that go into my game are laziness, easily-piqued curiosity, and heuristics. I hope your sausages still taste okay, though.

Hack ‘n’ Slash starts with a digital version of the Double Fine logo. This is neat! Then it segues into a fancy title menu, where a Let’s Go On An Adventure-pose character is supported by upbeat, blocky music. This is also neat! Then it crashes. This… this is less neat. 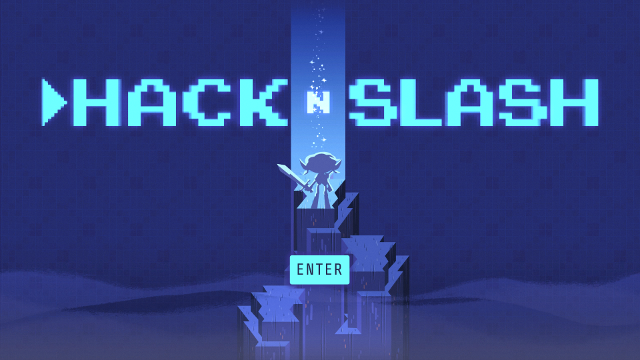 It took me a while to figure out it crashed, too. I spent quite a while staring at this menu screen, waiting for the game to register that I wanted to start.

Once past the title screen of doom, Hack ‘n’ Slash’s main menu is…

…okay, do you know how I occasionally say here that certain menus are ‘sparse’? And then that means it only has a few options, maybe two or three buttons, relatively little input on video and audio, that sort of deal?

Hack ‘n’ Slash’s main menu has two buttons. One is for starting a new game; the other is for managing mods. There are, all in all, three colours in it. 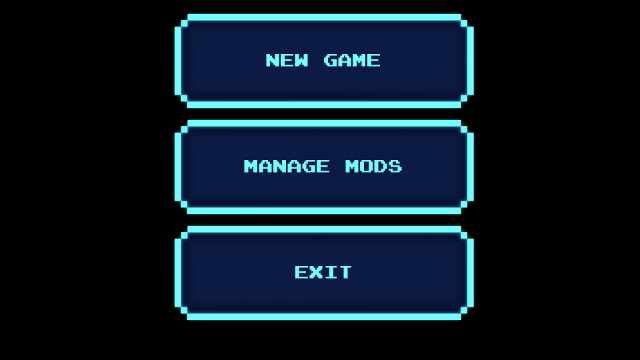 What I’m saying is that this menu is *sparse*.

Alright, Hack ‘n’ Slash. That’s how you want to play it? You don’t want to give me any options? Fine. I don’t want your options, anyway. From here on out, I swear to never look at your options again! For as long as I live.

I start a game. I’m told to pick a name. You get three guesses as to which name, and all guesses that aren’t either ‘Jarenth’ or (the default name of) ‘Alice’ are invalidated immediately. I enter the name into a menu-fitting text box, which means it’s not incredibly interesting to show you. Then I start the game proper. 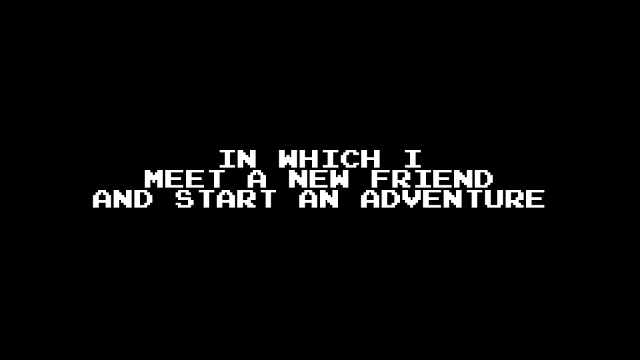 Empty menu, lack of options, odd in-medias-res opening. Double Fine, what did you get me into?

Act 2 starts with my rather elfin-looking self — as in, I look like a Santa elf — falling through the ceiling and into a cave, which is also a cage. Fancy that. Elf-me comments on the relative painless nature of the fall, invoking the Gods of Schadenfreude, and gets beaned in the head with a sword soon thereafter. 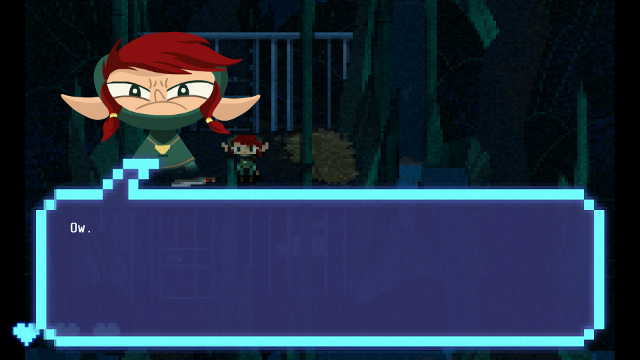 Hack ‘n’ Slash insinuates I should pick up the sword. And I could.. or I could run around the tiny cell cage like a doofus for a minute or so, learning the controls and checking for secret secrets.

WASD moves, as do the arrow keys. E interacts, as I find out by mashing it at a gate. Locked, of course. Interestingly, the gate panel has a decal on it that kind of looks like a USB port. In the place where the lock would be. Is the decal hiding the actual lock? That would be kind of clever.

No other interaction prompts or buttons present themselves, and mashing buttons is not appearing to do me much good, beyond the obligatory Escape-for-menu. I resign myself to picking up the sword, like a good little peon, and am rewarded for this with the ability to swing it at things with the spacebar. Like a good little peon. 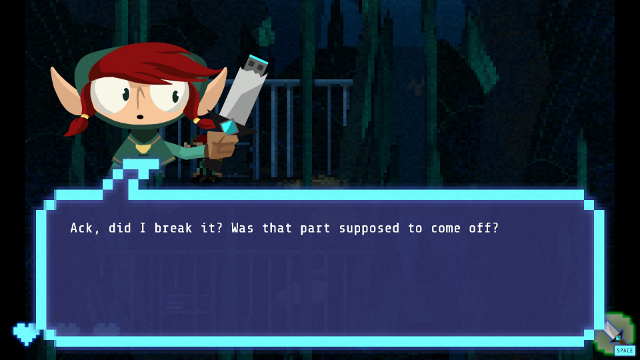 But man, talk about a mixed blessing: it turns out that the sword’s brittle outer shell was hiding a… USB key? Oh, okay. Okay. I see how this is. My sword is a USB key, and the gate has a USB port on it, and I’m ignoring my sudden-onset Transistor flashbacks to do the immediately obvious thing. 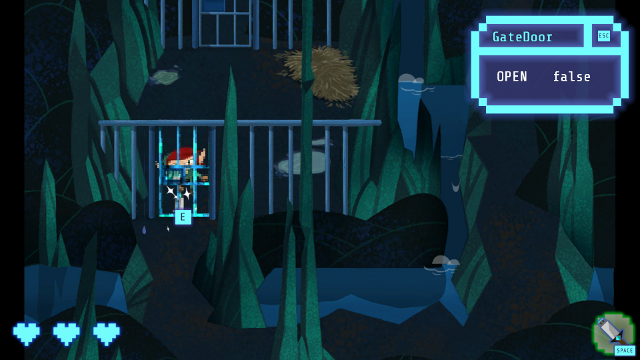 I hack the gate! By swinging my USB sword at it. A little unorthodox as far as hacking goes, but then again, what do I know? The gate only has one variable, ‘open’, which I toggle from False to True. And hey, presto! Freedom.

The gate only has one variable, though? That seems weird. Is the only defining characteristic of gates in this world whether or not they’re open or closed? They don’t have variables for, say, location? Or material? Or sound produced? None of those things are in any way ‘variable’ between gates? All gates ever in this game world are made from the same material, make the same noise when opened, and are in the same coordinate location?

Who cares about those questions, though? Time to bail this popsicle stand. 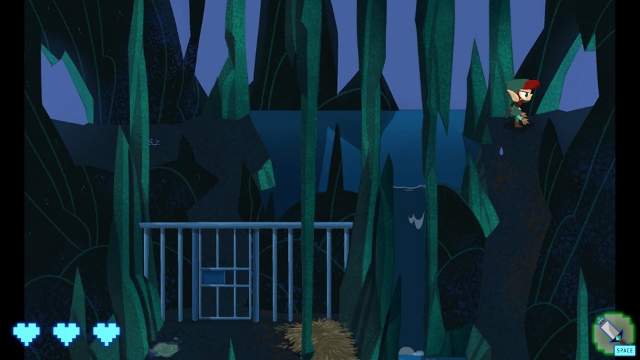 One room over — wow, this room looks familiar — I find a block with magical markings. I push it. I find another block with magical markings, blocking my way. I push it, but nothing happens. Luckily, this block has a USB slot as well: I hack it to find out that the ‘REMAINING_PUSHES’ variable was set to 0. Because… that is how blocks work, in this universe? Well, whatever: either the block is mumbling at me, or something underneath the block is mumbling at me, so I up the pushing variable and give that sucker a shove. Just for fun, I change the ‘TILES_PER_PUSH’ variable to a negative number, and the block duly rewards me by sliding backwards.

From underneath the block, a tiny fireball with fairy wings emerges. It imprints on me rather quickly. 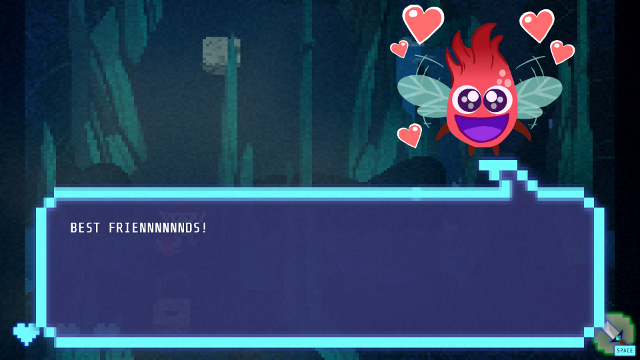 Who could say no to that?

Then, a cutscene involving a wizard plays out, somewhere else. 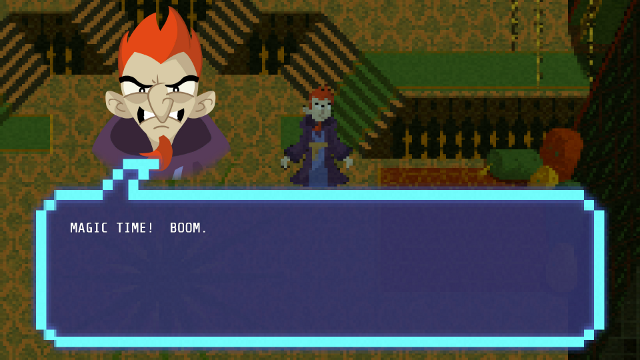 Your guess is as good as mine.

It’s worth noting that, at this time, I still don’t have any clue as to what the hell is going on here.

Elf-me and the sprite — I call him Steve — ‘bond’, whatever the hell that means. Then, now an unstoppable team, we emerge out of the cave, and into a location that has more colour types than blue and green! 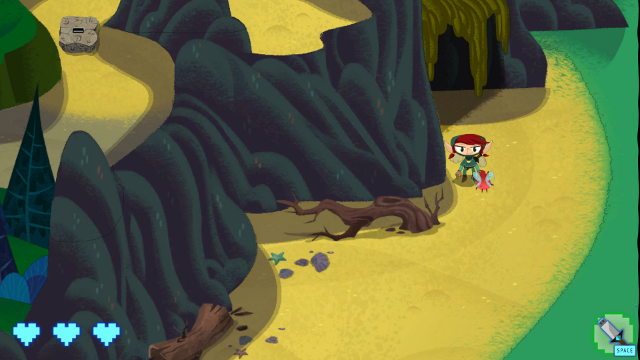 I walk past the beach. It’s pretty. I walk into the water, and am deposited back onto the shore with an audible plop. Alright, no swimming. Instead, I walk further in-land, finding many a thing to look at and hack.

I walk around a bit, taken in by the splendorous colour and weird hacking-focused ecosystem of this new world. As such, I don’t notice the hole in the ground until I’ve already fallen in. It… it takes me back to the cage cave I just came out of. Except that this time, there’s also a giant chest in it. 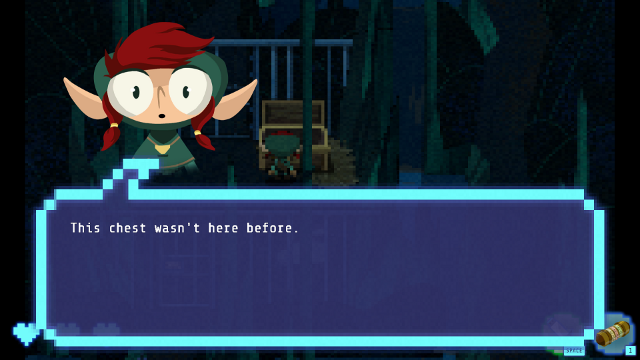 Yeah, that’s that I was thinking too.

The chest contains a magical artifact: a scroll called DAY_NIGHT_SPEED. With it, I can… well, chance the value of the DAY_NIGHT_SPEED variable, really. It’s set to zero, now, which explains why there’s never any night.

I run around more. There are more bushes, and rocks, and ravens, and turtles. And a treasure chest. And this weird rock, with what appears to be colour-coded programming language on it. 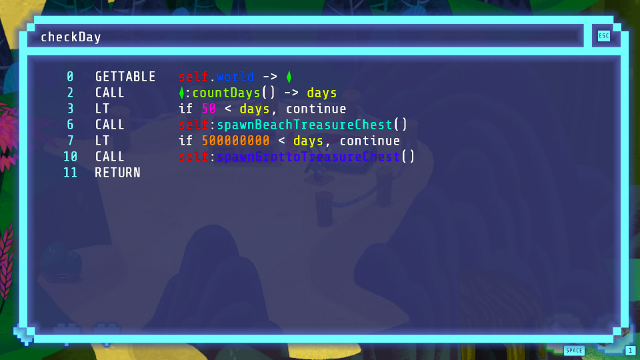 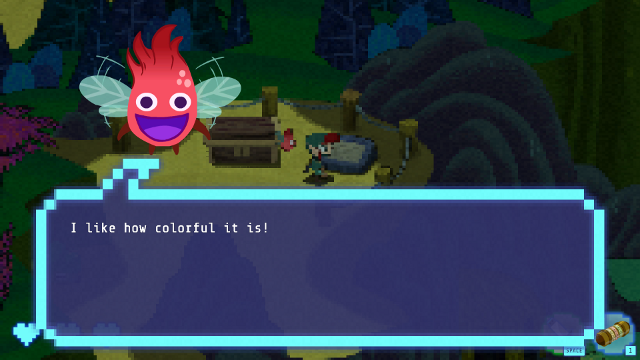 I still don’t have the least clue what is going on.

I mean, the chests and the hearts and the equipment all seem to point towards a Zelda-style adventure, except that it involves hacking shit. Is that what Hack ‘n’ Slash is? I’d be down with that. I don’t really have any idea as to who I am, or why I’m here, or what I’m doing, or where I’m going, or when I’m going to see Act 2, or how I progress. But maybe… maybe I’ll find out all of those things by exploring more? That’s how Zelda-style games usually work. And hey, I already found one world-altering artifact: maybe there might be more of them, all waiting around the next corner?

Alright, then it’s settled. I’m going to explore this forest some more, in order to hunt for a purpose. Or a yellow-brick road, because that suddenly seems thematically appropriate. Check back in whenever!