Being Groot was a lot of fun! I got fireballs and fire meteors and fire swords and some sort of tiny black hole, because eh. I was never too sure on how that thing worked, to be honest. 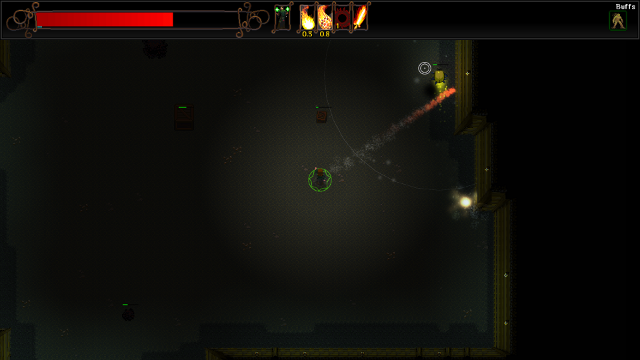 When you’re a self-healing fire-spewing tree druid, details like that tend to drop by the wayside.

I did pretty well as Groot, though! 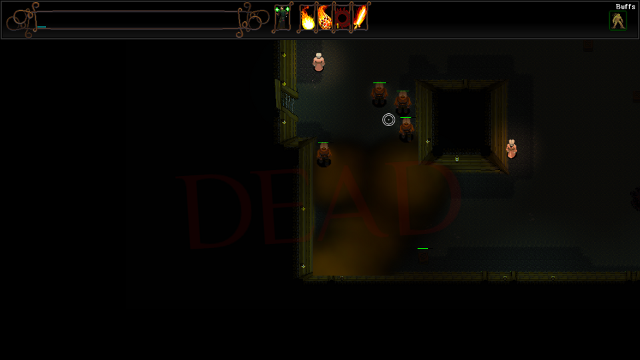 Then, I played… some other characters. I kind of dropped the extended Guardians of the Galaxy metaphor after the second guy, in favour of an Efreet-heritage paladin who spat fire, burned enemies by running into them, and turned every source of damage into radiant murder auras. 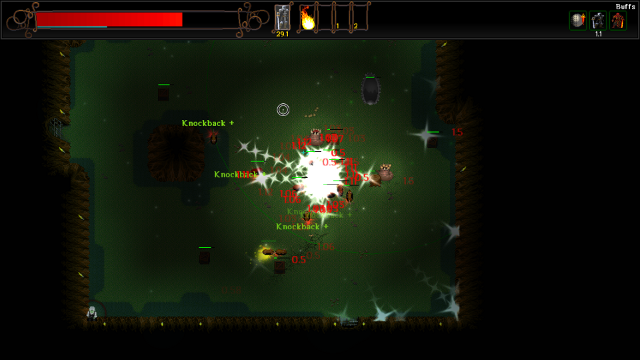 I won’t lie: this was hilarious and I loved doing it.

Then, I gave him kickass exploding water bubbles, chain lightning, flamethrowers, Jigglypuff’s lullaby, and some kind of ultimate spell that caused magic orbs to rotate around like half the screen. 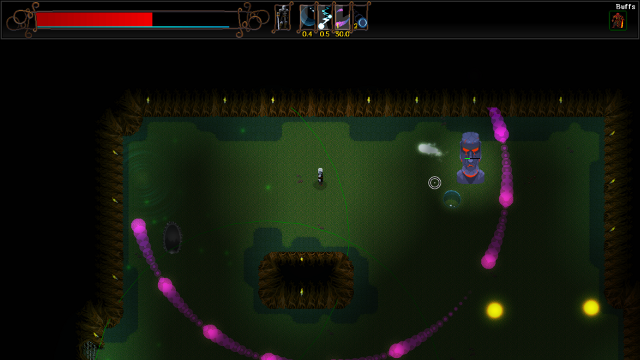 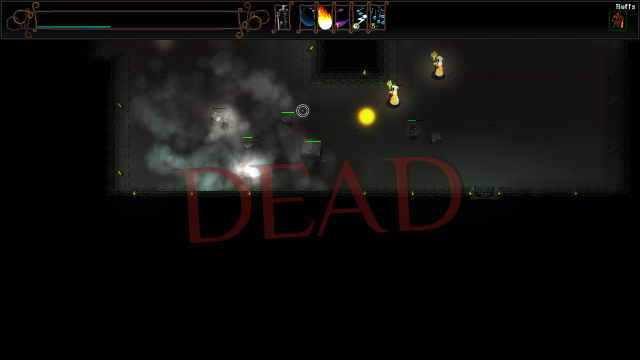 Many guys and gals were played. Zombie-raising auto-warlock? Yup. Lizard assassin of the gods? Been there. Chimera warrior priest? Bought the t-shirt. Mystical bender of the elements? Yeah, I’ve been Korra. 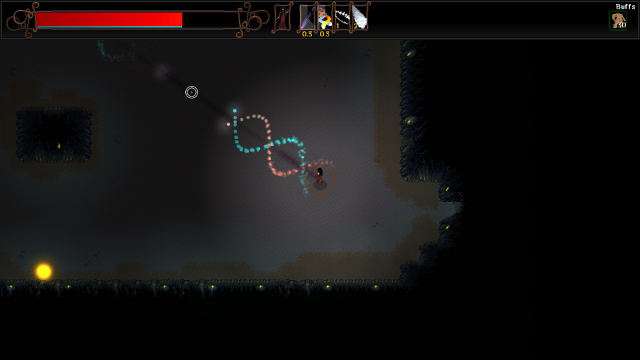 A version of Korra who also shot lasers of darkness from her hands.

And with each run and each death, the desire to keep playing grew… smaller, actually. I felt myself less and less inclined to jump back into the fray with each passing game. And… I actually expected that to happen over time, to be honest: a game about trying out crafting and character combinations is probably only going to go as far as the number of new things it can show to the player. But I’ve crafted, like eight percent of the spells, and I haven’t even touched most of the races and classes yet.

The sad fact is that the core gameplay of Runers, the running spell-combat and dungeon exploration, is just not all that much fun to play. 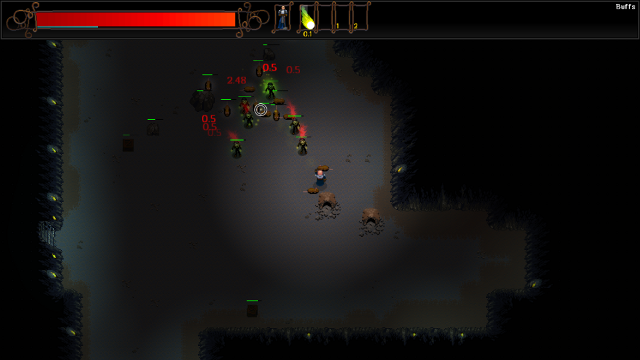 You kill a bunch of rats óne time…

Rather, it’s probably fairer to say that Runers feels like one big cohesive game, and more like two tenuously connected games. There are two sets of gameplay mechanics here, and while they are connected on many levels, it’s clear that this is not exactly a happy marriage. Probably because one of the partners has to play second fiddle to the other partner’s constant showboating, and because the levels of interaction both are comfortable with are more than a little bit apart.

Runers’ combat and exploration, i.e. the parts of it you’ll be spending most of your time in, are basically essentially a twin-stick shooter. I called it that on the previous page, halfway in jest and halfway because I didn’t know any better, but it turns out it does actually resolve to that.

Runers is a game in which you circle-strafe large groups of enemies, avoiding direct contact and firing endless streams of bullets into enemies while dodging their bullets in return. You have space for two ‘auto’ attacks, that you fire by holding down buttons, and a number — I’m going to say four — of special attacks that you trigger manually, through button presses. You gain access to a large number of different attacks, that you can map to these buttons at-will… but the way the mechanics work, you are mechanically incentivized to equip fast-firing spells in the auto-fire slots, and slow-firing utility and nuke spells in the manual slots.

You also fight some really weird bosses, but that’s neither here nor there.

Really, it’s not so much that Runers is a twin-stick shooter: that’s a point that can be belabored and discussed at length. What matters is that that Runers encourages you to play it like a twin-stick shooter. The fast-moving, poorly-aiming enemies, many of whom deal damage in close range or on contact, force you to remain on the move or die. Moving and aiming is difficult as-is, so you favour burst spells over fine-targeting spells. And the latter are screwed up even more by the occasionally janky targeting controls: I love Chain Lightning, I really do, it’s such a great spell, but it can be a pain go hit with. You have to fire the spell at the exact moment the targeting cursor overlays and enemy, or it’s a miss. Or I could opt out of that, and instead spam Water Crystals and Mini Meteors all day erry day.

What I’m saying is that you couldn’t play Runers as a careful mage, slowly progressing through rooms with aimed spells and buffs. But what I’m saying is that that kind of mage is going to run into serious trouble the first time they enter a room populated by heat-seeking beetles and turbo-skeletons. 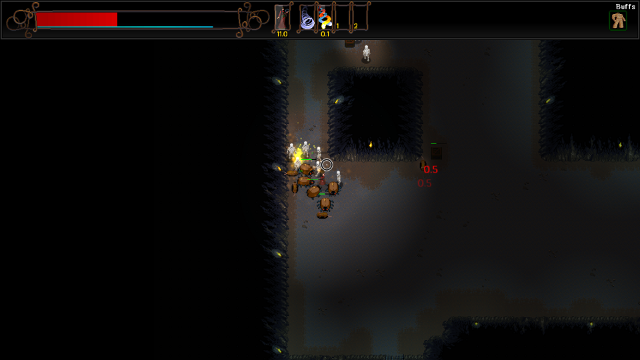 Which, given Runers’ random nature, could very well be the first room.

So okay, fine, Runers encourages play as a twin-stick shooter. Not a bad proposition, in and by itself: I could get behind the idea of a dungeon-crawling wizard-shooter with swappable spells.

Except now the stats no longer matter.

If Runers’ combat and exploration gameplay is a twin-stick shooter, Runers’ spellcrafting is an elements-combination game tied to an RPG system. You know the kind of game: you pick one thing, and then you pick another thing, and then you rub the two things together in the hopes of something cool happening. Anyone who’s played games like Doodle God and its ilk will know the visceral appeal of figuring out how to make vodka from earth, fire, and human ingenuity. That sort of game.

Runers’ spellcrafting is entirely, 100% that. There is almost no rhyme or reason to which elements combine into which spells, beyond the basic ‘spells based on fire usually have some fire in them’. And even that’s not a hard-and-fast rule. And unless you peek in the Runedex — where you can sort all spells, even undiscovered ones, using a list of keywords — you have absolutely no idea of what kind of spell a given combo will produce.

So, you’re gambling. “What will Earth and Fire do? Ooh, a Mini Meteor. What can I get from Mind and Dark? Oh, cool, a Dark Manifestation that grows in power over time. Mind/Mind is a stronger version of single-Mind? That makes sense. And, wow, triple-Light creates an area-buffing beam. Didn’t see that one coming!” 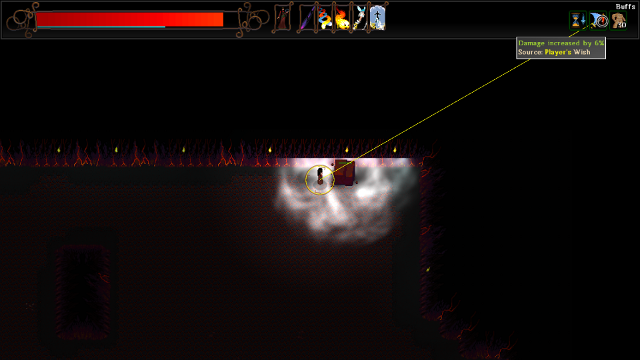 I was hoping for some kind of super laser, but eh.

Apart from the gambling aspect, the spellcrafting system also plays heavily on the stats side of Runers. Different spells have different damage values, different cooldowns, different effects, different rune levels, and so on, and so forth. The runes you find can have modifiers, which increase the spells you craft from them in certain ways. And as I’ve mentioned before, you can use single-element runes to empower spells you have that play off of these runes, improving them in predefined ways.

It’s an interesting system, and definitely my favourite part of Runers. And it’s hampered by the fact that it’s tied to a twitch-based rail shooter, where your character’s stats play major second fiddle to your player’s ability to anticipate and dodge attacks and circle-strafe. 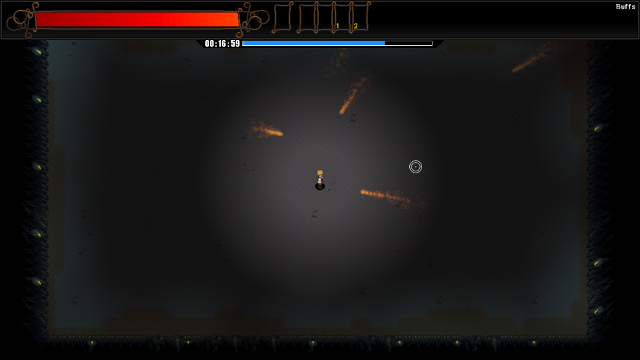 Ain’t no spell gonna help you not get hit by fireballs, Johnny Generic.

Alright, that’s not entirely fair. Runers’ twin-stick shooting and spell-crafting aren’t exactly a match made in heaven, but I found the overall game interesting enough to stick with for a little while. And while stuff like the extraneous leveling-up system and the optional challenges never felt all that at-place, they didn’t exactly hurt the overall experience either.

What really dragged Runers down for me, personally, is its gating off of spellcrafting by way of the random-drop Combiners. Guys, I like the spellcrafting part of your game so much. I really do! Why aren’t you letting me play that? I’m okay with the random rune drops, for the most part: there are so many spells left to craft that I can’t complain about not having the exact I want every time. But I’ve played games where I ran around two floors without so much as finding a single Combiner. Runes piling up, modifiers taunting me with their excellent-ness, and nary a way to turn them into cool, undiscovered spells in sight. 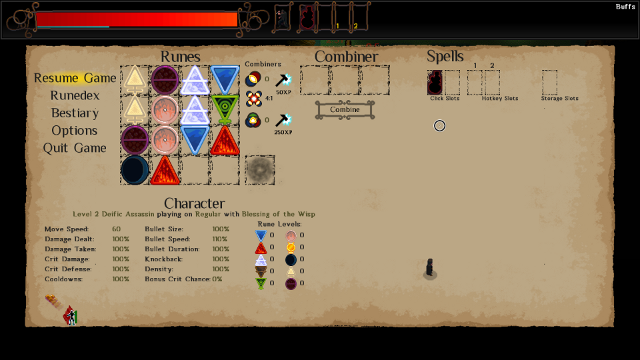 Let me play with these amazing toys already!

And while the two-rune Combiners are at least somewhat obtainable, the three-rune Combiners are rare to the point of nonexistence. Which, I get the idea, from a balance perspective: three-rune spells are the endgame, the most powerful spells, so you want to limit access to those a little. But guys: those three-rune spells make up such a big part of your 285-spell arsenal. 220 of your 285 spells, if my math is correct: gating off a cool 77% of your total spells behind rare, hard-to-find consumables is basically you telling my collector’s instinct to either get grinding, or get the hell out.

True fact: I like a lot about Runers. I dig the spellcrafting, the visuals and the audio are nice — didn’t mention either of those throughout the entire review, but rest assured they’re nice — the core combat is mostly functional, and I very much like how it provides an Arcen-esque choice overload that manages to not entirely flood the player’s mental space.

But, other true fact: I also dislike a lot about Runers. The core combat is mostly functional, and never really excellent, the random-dungeon-exploration gameplay gets a little old a little soon, there are some serious spell balance issues for the chosen gameplay style, and the random-combiner-drop system kills the fun of spellcrafting for me too soon. We live in a post-Wiki age, LGK Games: I can either spend hours meticulously finding each and every spell combo in your game, or I can watch someone else do it for me. Any grind mill needs a hook, and your hook… it had me for a while, but then it went slipping.

Runers costs the equivalent of eight European Money on Steam. Is it worth it? Hard to say. I had fun with it, which tends to be the litmus test for game prices around my part of the Internet. Eight bucks for a few hours of spell-crafting and rat-killing isn’t too bad in my book.

Crucially, Runers has a Steam demo. If my review made you somewhat interested, I do highly recommend checking that out. See if it hooks you more deeply than it did me, or if you get petered out on the content on offer after a few hours. I really hope it’s the former, for you: Runers seems like an excellent way to waste a whole bunch of hours, provided your psyche lets it.

Jarenth is the result of fusing two Mind runes, an Earth rune of +5% Stability, and a pair of off-brand designer glasses. Rune. That’s right, a four-rune combo. Admire him on Twitter or bask in his radiance on Steam!