Readers, what’s your favourite system of public transportation? I’ll tell you what mine is: it’s the metro. Subway, underground, whatever you want to call it. I love the metro. For an agoraphobic like myself, whose panic-fear expresses itself in a discomfort around wide open spaces, the ability to go deep underground, board a carriage, and emerge halfway across the city without even having the sensation of travel is pretty much magic. It’s as close to customer-level teleportation as we’re likely to get within my lifetime, is what I’m saying.

So when Steam helpfully informed me about the recent arrival of a game called Mini Metro — by the two-Curry outfit called Dinosaur Polo Club, no less — it was clear what I was going to have to do.

(Go hang out in Vienna for half a week, messing up my Indie Wonderland schedule something fierce.)

Mini Metro is currently in Early Access. Very Early Access. How Early Access is Mini Metro? Let me tell you: Mini Metro currently has no sound. None of it. Not a peep. Unintentionally so: it’s supposed to have sound, and the current opening screens have a habit of profusely apologizing for the current lack of it. But this is how Early Access Mini Metro is: when Peter and Robert Curry found they had the time to either get their game in a playable state, or to provide their unplayable build with aural support, they simply shrugged, grabbed some earplugs, and coded their game into existence in 0-dB silence.

Yes, that’s my imaginary story and I’m sticking with it.

Anyway, standard Early Access review disclaimers apply: I’ll try to talk mostly about the completed things, the elements I think are crucial enough that they’ll definitely make it into the game proper, but I’m no seer by any stretch. Who knows, maybe Mini Metro does have sound by the time you read this. Unnecessary addition, in my opinion, but weirder things have happened.

Mini Metro is a game about building a metro system. News at eleven.

Mini Metro is a stylized, semi-abstract puzzle game about building networks. The player is tasked with using a limited set of connections — or ‘lines’ — to connect together an ever-growing set of geometrical nodes — or ‘stations’. Nodes slowly fill up with tokens — ‘passengers’ — which are carried around between nodes by instantiations of a transportation protocol called ‘trains’.

For some inscrutable reason, Dinosaur Polo Club has decided to layer a completely extraneous metro metaphor over this lovely network architecture puzzler. 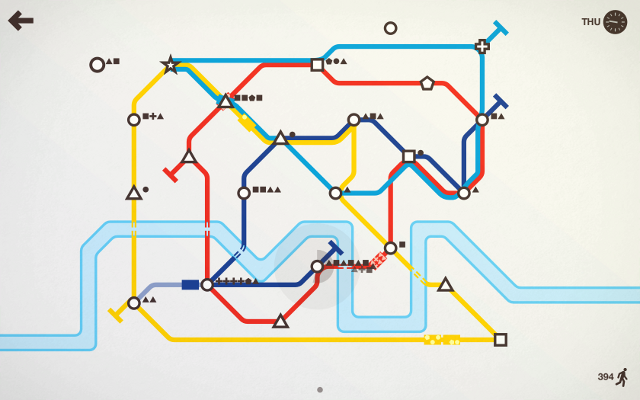 Some people just can’t be happy with what they have.

Mini Metro’s gameplay takes place on a certain set of maps, each modeled after a certain famous city with a metro. At time of writing, that’s, London, Paris, New York, and St. Petersburg. As someone who’s only recently visited Brussels and Vienna, I was sad to see neither of these cities in the to-planned list. I’m assuming these cities’ lack of recognizable water hazards was a factor here, but who knows? The future’s the limit.

Mini Metro’s gameplay is best described by example, so allow me to do just that. Let’s say we start in Paris. 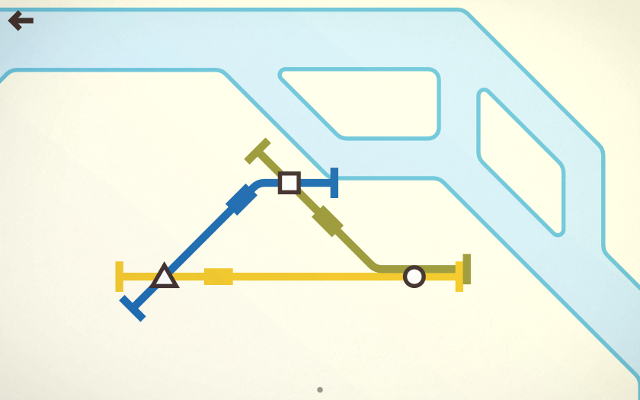 Because that is what you do.

Each map starts you off with three stations, represented by a circle, a square and a triangle. As time passes, passengers queue up at the metro stations. Passengers are represented by the same geometric symbols that make up stations: you get tiny black circles, squares, triangles. Like seeks like: circle passengers need to get to circle station, squares want to visit squaresville, and so on.

The stations are initially free-standing, but you also start off with three metro lines: blue, yellow, and filthy-green in this case, though the colour schemes differ per city. You can connect any number of stations with any single line, following some simple zoning restrictions. 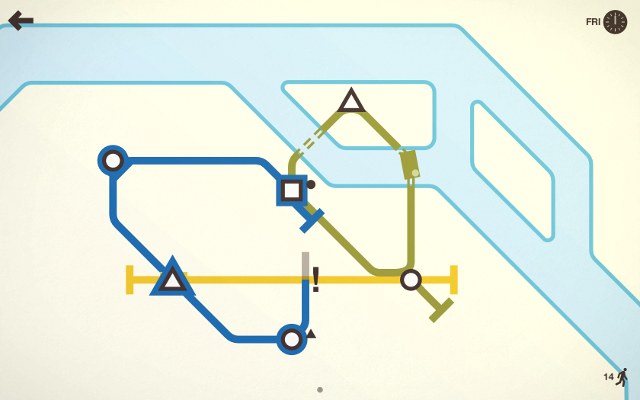 Lines can’t cross each other unless they share the nearest station, and you need tunnels or bridges to cross water. That’s it.

Every line you create starts with one engine, a self-propelled train that can carry up to six passengers. Engines travel your lines on their own accord, moving either back and forth, if your line has two distinct end-points, or in a loop, if that’s how you roll. Passengers embark and exit automatically, and disappear forever once they reach the proper station. One point for you.

Mini Metro starts out simply enough, but it gets more complicated as time passes. Over time, more and more of the three initial metro stations will start popping up. The map actually slowly zooms out to accommodate these new stations, which gives a game of Mini Metro a nice sense of gradual expansion of scale. And if you thought one triangle, one circle and one square were insufficient, you’ll love having four triangles and eight circles! And one square.

Additionally, sometimes, one of your existing circle-triangle-square stations will morph into a new, unique shape. Like pentagon, or star, or crescent moon. 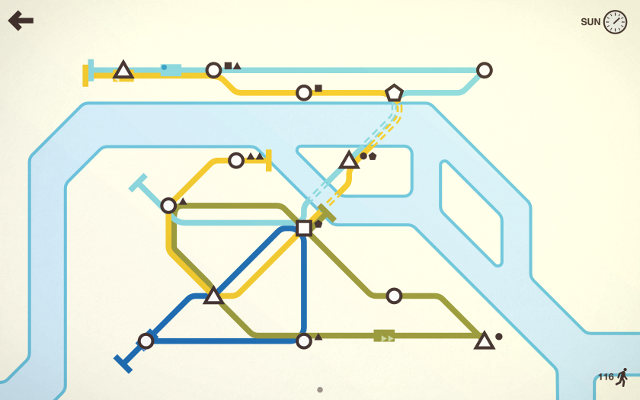 Here, have both of those.

More stations means a longer round-trip time for your trains, which increases waiting time at any given station. The overabundance of circles means a lot of ‘dead’ stops for triangle and square passengers. And unique stations often necessitates passengers changing lines: if only your Red line stops at Star Station, you best be ready for rush hour at the crossings. You see how this gets more complicated? And I haven’t even mentioned the difficulties involved with crossing water, which can throw a soggy wrench into even the best-prepared works.

To counteract this increasing complexity, your own toolbox gradually expands as well. Every week, like clockwork, you receive one new engine, which you can put on any of your lines. You also get a choice of additional bonuses every week, two — random? — alternatives at a time: more carriages to expand your trains’ carrying capacity, more lines to alleviate stress on key chokepoints, or more bridges/tunnels to help you ford the waters.

Oh, and you can also delete any lines you’ve created and reassign every piece of equipment at the drop of a hat. If only real metro systems were this flexible, huh? 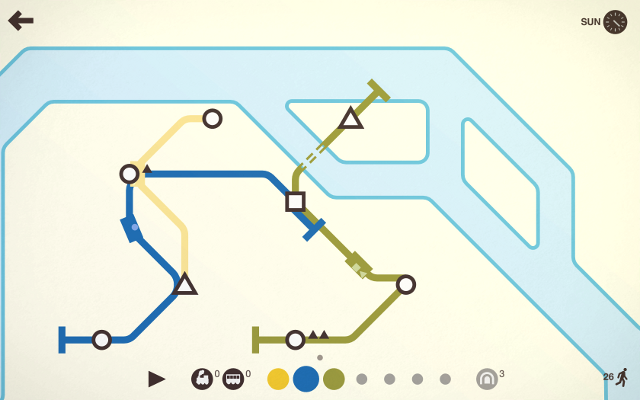 Changing up metro lines is as easy as clicking and dragging, the main mode of operation for anything Mini Metro-related. You can drag any section of line over any station to include that station as a new stop, provided it’s valid to actually do so. Mini Metro automatically changes your metro layout to match… which creates interesting tunnel configurations, sometimes, but it works. For more involved tunnel work, you can manually ‘unspool’ any given line, unhooking and rehooking them to stations in the order you want them to travel.

In the normal game mode, the goal of Mini Metro is to keep playing until you fail: metro stations can only hold so many passengers at once before they become ‘crowded’, and if a station remains crowded for about thirty seconds, you lose. There’s also a Zen mode, which I assume lacks the fail-state, and a yet-to-be-implemented Rush Hour mode, which I’m not sure I even want to try out.

And… that’s it, really! That’s Mini Metro in a nutshell. Hook up stations, assigning materiel, create a network, and ferry passengers from A to B for as long as you can before civilization descends into chaos.

If that sounds simple, well, that’s because it is. Mini Metro is not a very complicated game. But simple doesn’t equal easy, and you’ll soon find that even the most well-thought-out plan gets more complex… 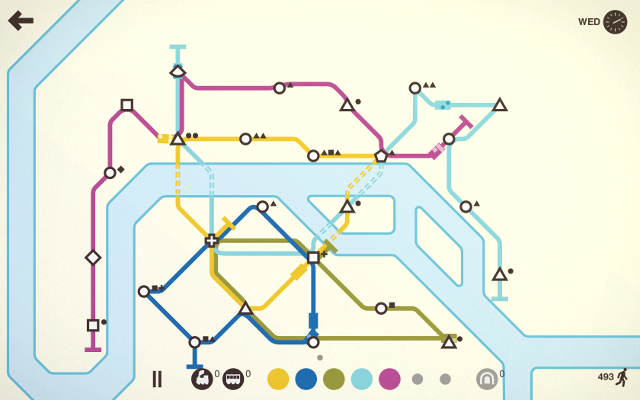 …and even more complex… 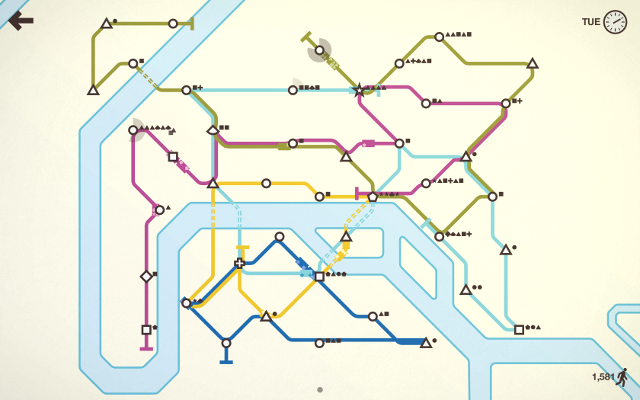 “OH GOD EVERYTHING’S COLLAPSING AT ONCE”

…until you finally, inevitably fail. 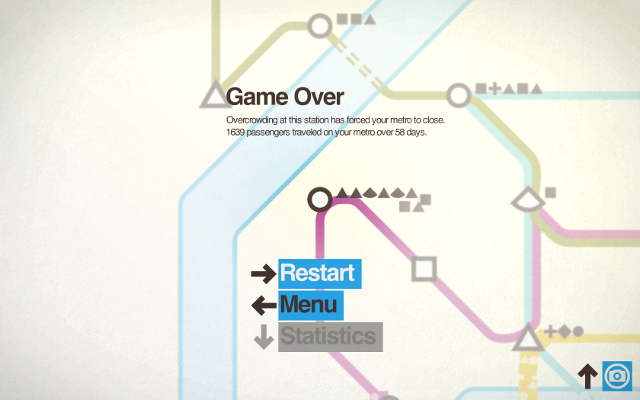 “Aah, the sweet release of unemployment.”

I enjoyed Mini Metro. It’s a decent low-weight time-waster: a great game to play when you’re also doing something else. A great podcast game, basically, especially with the current lack of sound. The controls take a little getting used to, and the game’s current lack of tutorial means it can be a little hard to get into — unless you just read some helpful explanation slash review, maybe. And, of course, there’s the issue of taste: Mini Metro is unabashedly a score-chaser, that genre of game that not everyone gets into. The closest Mini Metro comes to having an overarching story is that time I imagined that the collapse of my St. Petersburg station actually signaled the nuclear war that lead in Metro 2033. But as far as I know, that’s not canon. 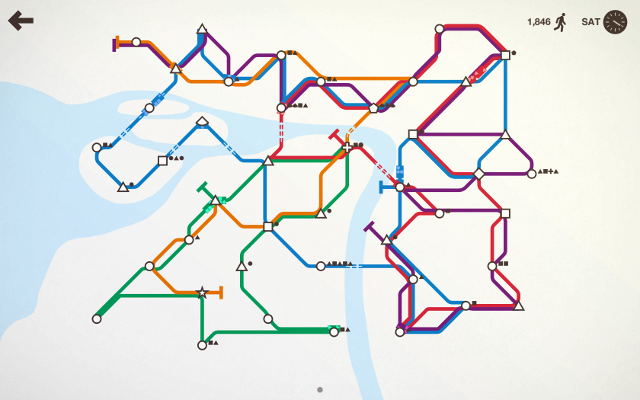 If there are stories in Mini Metro, they’re the ones you generate. That time I deleted an entire subway line in the north of London, for instance, just to provide quick relief to two overcrowded southern stations, springs to mind. And I still failed: the lack of fine control you have over your carriages’ intent and direction is one of the prime causes of system failure, and the one reason I sometimes get incredibly angry at Mini Metro. “Why are you going LEFT? There’s a whole station of passengers rioting to the right! Go get those! Before they… yeah, too late. They set fire to Kings Cross.”

Of course, if you don’t care about stories, that whole point is moot as a moat. And if all you’re interested in is a cool, abstract-aesthetic network puzzler with a metro motif, Mini Metro is a pretty decent investment. Again, Early Access warnings apply. But I thought it was alright entertainment for the seven Steam dollars it currently sets you back, particularly keeping in mind the presence of more game later down the line.

If you’re reading this, Jarenth forgot to update this temporary end-line. Your only recourse now is to mercilessly mock him in the comments. If you won’t do it, who else will? That’s right: nobody. And then, the communists win.