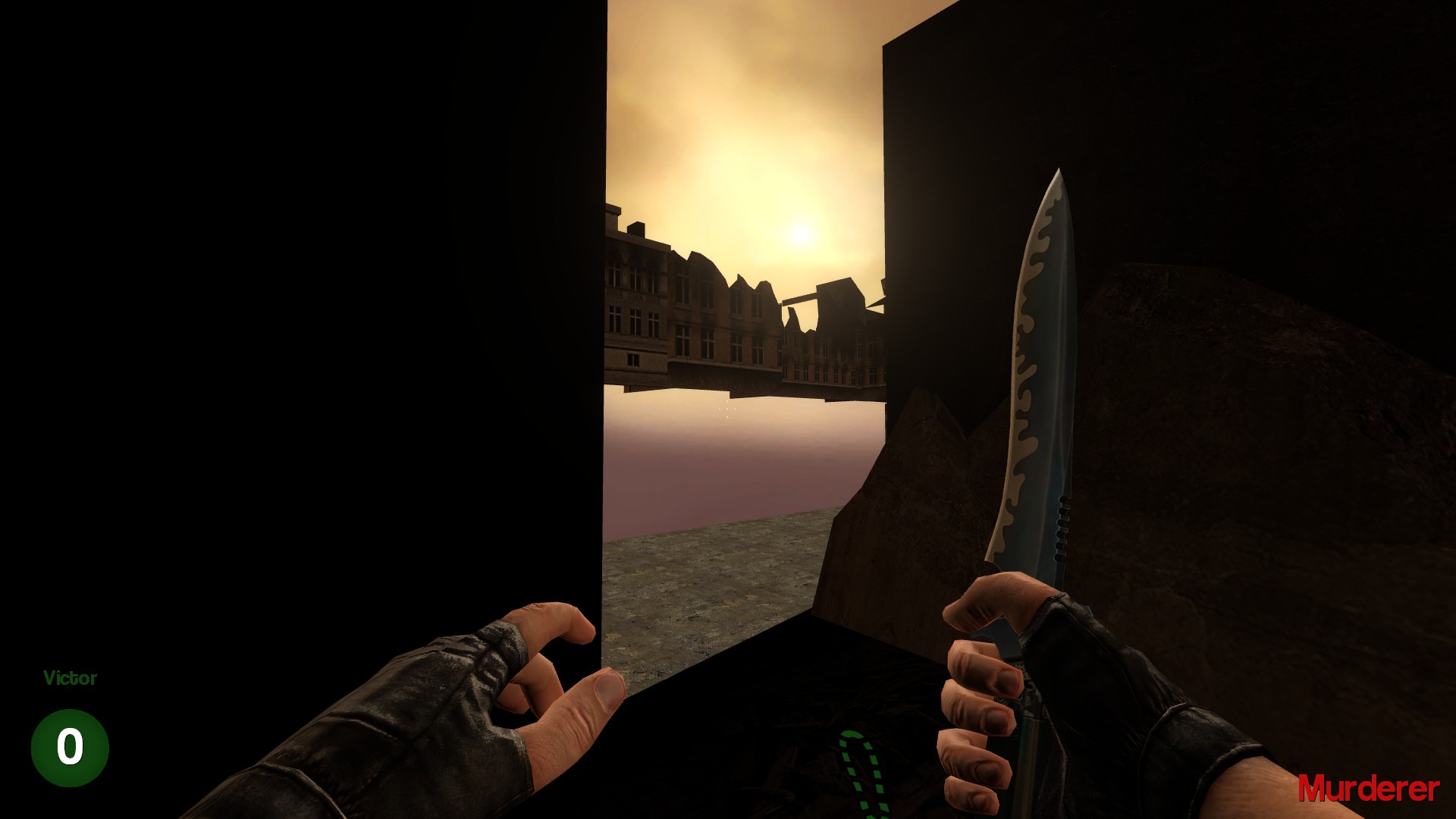 I interrupt this blog post to give breaking news: One of my gaming buddies runs a little Youtube gaming channel, and I’m on it now! Here’s a new episode that features us playing Morbus!

I’m actually in a few other episodes on that show too. Man, I’ve just been waiting for a chance to share it.

In Morbus everyone can pick up a gun like in TTT. The twist is that one of you is an alien. The alien has a human form that functions like other human players, but can also transform into an alien form, which deals more damage but cannot use guns. And when the alien kills someone, that person becomes an alien. And when you die from something other than being stabbed by an alien, well you don’t have to sit around for the rest of the round! Instead you become a different type of alien that functions more like a zombie in Left 4 Dead — you only have an alien form, and you’re pretty damn flimsy. 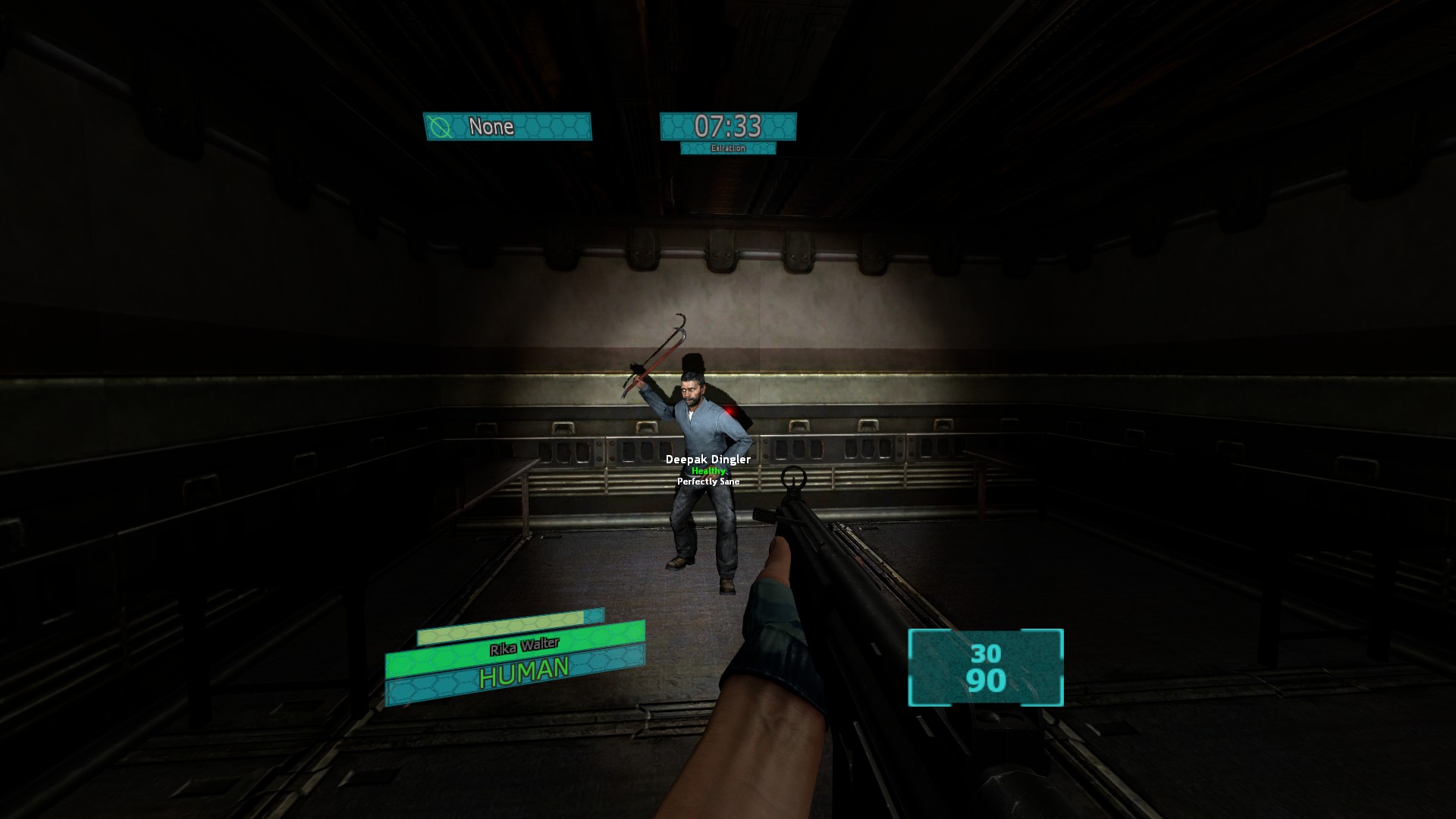 And the other big twist is that Morbus involves Sims-esque “needs” — if you’re human you’ll occasionally need to sleep, or eat, or piss, or shower. A ping marker will appear on your map showing you where you need to go. This prevents people from turtling together or hiding in corners of the map. It forces groups to split up. And on top of all that, when you’re fulfilling a need you’re vulnerable for about 8 seconds, during which time an alien can tear you limb from limb.

This turns the TTT gameplay from a mild diversion into a very tense survival game, where often times the biggest threat is not even the alien itself, but the paranoia that comes from distrusting everyone around you.

The only major flaw, aside from a few technical issues (like the iron sights being completely broken and useless) is the fact that when you fulfill a need your character makes a noise. This means that if you hear someone make a shower noise, or a pants-unzipping noise or whatever, that person is definitely undoubtedly human. This removes a lot of the tension. And in theory you don’t want to prove to people you’re not an alien by doing those things because then if they’re an alien they can kill you, but in practice, you could easily stumble into someone fulfilling a need and know they’re safe, and then prove to them you’re fine by fulfilling your own need, and then you both can trust each other. That’s an issue. Those audio cues should not exist.

That’s not enough to ruin the game, though. The four of us are having fun with Morbus, and we think it would be much better with more people. That way these big maps would be less vacant, more tension and unrest can occur with more people, and we’d switch from a Teamspeak server where everyone can hear everyone to the in-game voice that that uses locational sound and only those near you can hear you scream. That’s why I’m going to be organizing a Ninja Blues Morbus session, next Tuesday (Sept. 9)! Here’s what you need:

I’m not sure on an exact time, but it’ll be happening Tuesday evening (like around 6PM-10PM Central time) and if I come up with more details I’ll post about it here beforehand. My buddies from the show will be there. It’d be cool if you could too.