Man, I am the Bob-savingest. 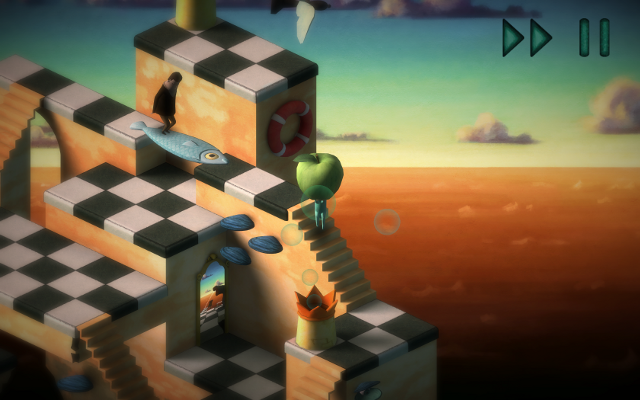 No fish-bridge will stop me from getting Bob back to bed.

As you may have derived from the fact that this page exists, I’ve managed to get Bob through his troubles and his hazards. It wasn’t always easy, but what kind of a subconscious Steve-friend would I be if I let my Bob run into dangers? Who would keep him from spontaneously being woken up by walking alarm clocks, or angry dogs, or buckets of ice water, or toothy holes in the ground, or whales mounted on train tracks?

Also, fun game: one of those five options isn’t actually a hazard in the game. Can you guess which one?

But yeah, I… more or less completed Back to Bed. Depending on how you look at things. Back to Bed has two level packs, Rooftop Trouble and Harbor Hazards, each clocking in at 15 levels each, and I completed all of those. After you do that, you unlock the additional ‘Nightmare’ difficulty mode, which re-treads the same levels, but under different circumstances. I played a handful of these. They’re still basically identical in layout to the Normal levels, but with a few key differences that increase the difficulty. 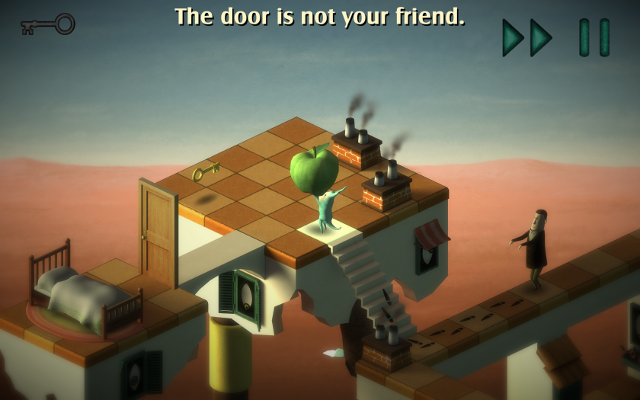 If you catch my meaning.

I had quite some fun with Back to Bed! It’s an interesting little puzzle game, with a suitable confusing audiovisual aesthetic and simple gameplay systems that are used to good effect over a short span of levels. It isn’t long, but it’s of suitable length to showcase the tricks and skills it wants to display without retreading old ground too much. There’s definitely some repetition, both in mechanics and in themes, and not every level is equally challenging and engaging. But overall, Back to Bed kept me engaged enough to see it through to the first end, if not to the second one.

This, err, also leaves me in the position of not really having a whole lot of material to go in-depth on. It’s just a fun little game, you guys! But then again, when have I ever not been able to ramble on about inconsequential game elements for a thousand words? 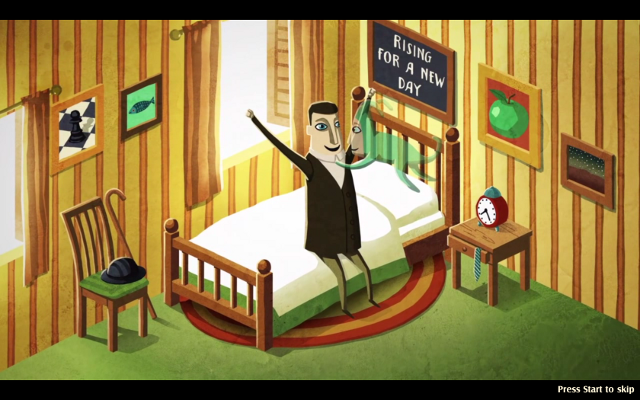 But first, we study this picture of Bob and his subconscious Steve-friend sharing a longing, meaningful look.

Gameplay-wise, Back to Bed is a pretty decent example of increasing complexity and diversity in game mechanics done well. It starts off relatively simply: control Steve around the field, place apples to influence Bob’s movement, guide him to the bed. But over time, more elements are introduced: space portals, gravity stairs, fish bridges, walking alarm clocks, Jolie-lipped air fans… 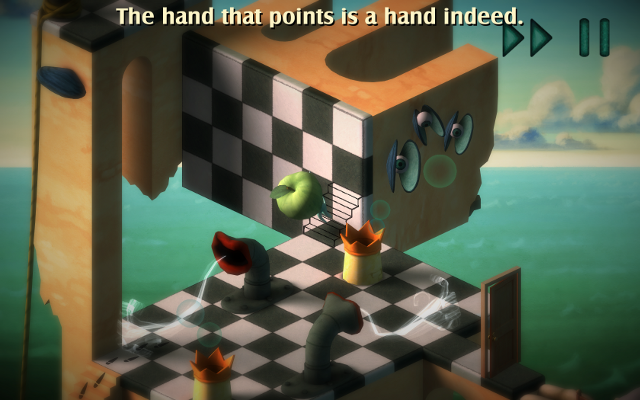 I’d make a joke about which element of Bob’s psyche these big, blowing lips represent, but we’ve been pretty good about keeping Ninja Blues family friendly up until this point.

While the basic goal of ‘get Bob back to bed’ remains unchanging, the ever-increasing array of gameplay elements mixes up how you need to go about it. Back to Bed also plays fast and loose with your understanding of the world geometry, sometimes: the same Escher-ian rules that apply to the way different parts of the level are linked can also serve as part of the solution.

This, then, is Back to Bed’s core puzzle solving loop: figure out what all the elements in the world do, figure out how to guide Bob through them, then do so. It’s pretty forgiving about this, too: many levels start Bob off in some sort of holding pattern, and running Bob over the edge just drops him off at his starting location, otherwise unfazed. That said, there definitely are levels where speed is a factor, and where you find yourself racing apples and fish from A to B to prevent Bob from stumbling into the eternal void. It’s an interesting twist on the formula, though Back to Bed’s grid-based system can be a little finicky about when you are and when you aren’t allowed to save Bob’s idiot path.

And while we’re on the subject: I’m glad that Back to Bed is so forgiving re: letting Bob drop off the edge of the world. But I don’t understand why the same rule doesn’t apply to the other, mobile hazards. If Bob runs into, say, a unicycle alarm clock with a bowler hat, you fail the level entirely, forcing you to re-start. Which tends to still not amount to much, in the grand scheme of things: Back to Bed’s levels are usually rather small one-note affairs. Practically speaking, the only difference between an over-the-edge Bob loss — which drops him back off at the starting point — and an actual-hazard Bob loss — which resets the level and drops Bob off at the starting point — is that the latter forces you to click through one or two buttons, and that it resets all your apple progress. 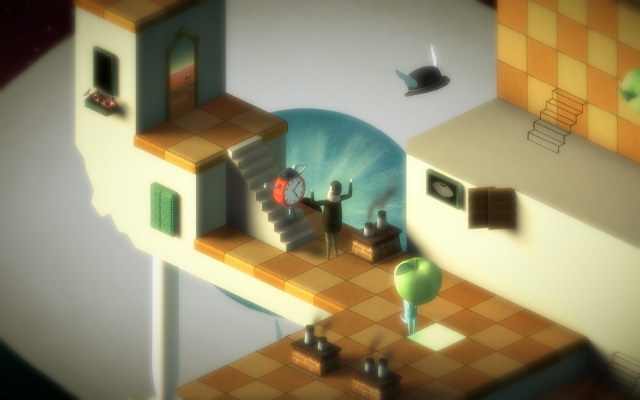 And you get this little intrinsically terrifying cutscene of Bob’s massive eye opening.

But aside from odd loss dichotomies and finicky control-bits, Back to Bed is a fun little puzzle game that gradually ramps up complexity and plays with its own expectations in interesting ways. As an example: one of the later puzzles was quite hard, not because of controls issues or state-resetting hazards, but because it didn’t occur to me to apply space-bending logic to the fish bridge I was holding.

Which, hey, segues neatly into talking about Back to Bed’s atmosphere and aesthetic. It’s quite the dreamy game, you guys. 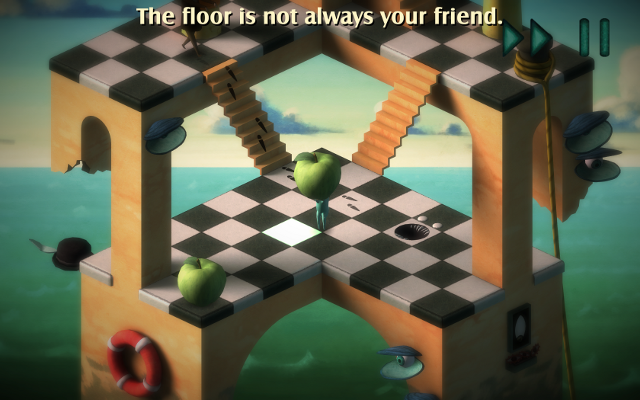 It feels weird to write this, but Back to Bed’s general aesthetic is ‘dream-like’ in almost an expected way. I mean, Escherian geometry? Talking apples, flying bowler hats, floors with teeth? You take one look at Back to Bed, and you’ll say ‘oh, this takes place in some kind of dream world’. Even though I don’t know anyone who actually dreams like this.

I’m actually kind of wondering, now, how these kinds of madness spaces came to be synonymous for ‘this is totally a dream’. It’s the same kind of sensibility that influenced Inception’s city-folding, certainly. Anyone of you readers more knowledgeable on this topic than I am? Any offer of cool knowledge is greatly appreciated!

Back on topic: while Back to Bed’s dream-theme is recognizable and expected, it totally works as far as mood-setting is concerned. And as much as I go ‘oh, flying bowler hats and chess pieces, that’s original’, when’s the last time you startled a stationary rook into sprouting wings and flying off? At 90° gravity? 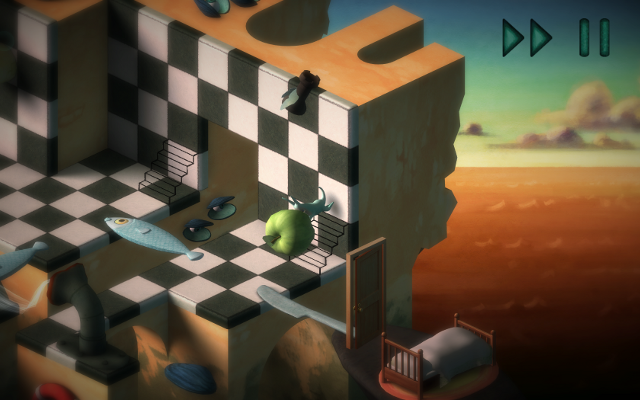 Back to Bed is visually a little busy, but — for me — not distractingly so. There is plenty going on the foreground and background both, but it’s usually easy enough to focus your attention on the things that matter. 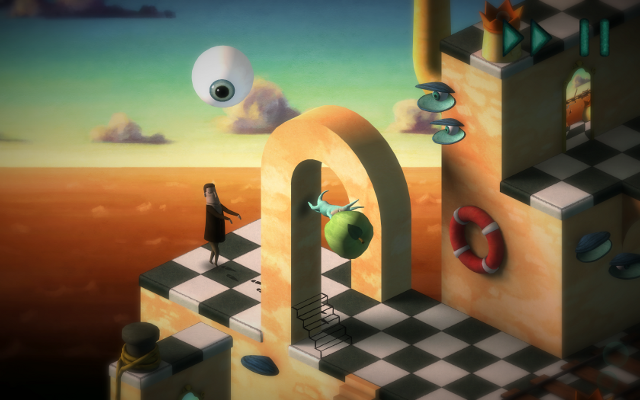 The exception is in the cases where it’s hard to figure out what matters.

I’d tell you something about the music, but I… don’t actually remember much about it? Long-term readers will remember that I tend to not devote much mental space to game music, it’s more or less my #1 Reviewing Flaw. But the fact that Back to Bed’s music didn’t impact me much at least means that it wasn’t annoyingly noticeable. And the ambient sound effects were neat mood-setters… even if they were as much subject to the game world’s rules of randomness as everything else. And while the occasional gull sound was easily placed inside the game, I kept taking my headphones off to check the outside in the levels that had a whole bunch of random car horn noises. “Is someone outside?… No, it’s just Back to Bed, I guess.”

The gameplay is simple fun, the challenge ramps up enough to keep things fresh, the aesthetic is interestingly weird and conveys the dreamlike nature well, the controls work, for the most part, and the audio only distracted me like once or twice. I think that’s a decent assessment of Back to Bed, honestly.

But just in the spirit of things, let me take a quick nap and see if I change my mind.

Alright, alright: I did play a few more Nightmare mode levels, to see the difference. I was a little flippant about ‘they’re the same basic levels’ earlier, but on reflection, I do like that: the additional of the key-collecting mechanic throws your idea of ‘knowing’ these levels into disarray, forcing you to re-think the way you view the spaces. It’s a clever way of re-using level resources while still making the actual levels feel rather fresh.

It would probably have worked a little better if these ‘only unlocked after beating the whole game’ level hadn’t included some of the same tutorial dialogue as their easy counterparts, but eh. 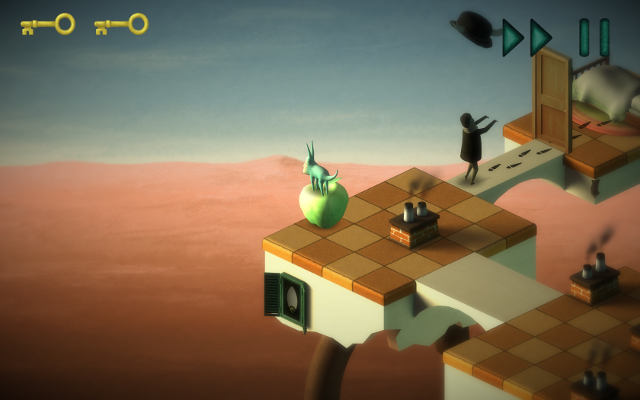 Steve is standing on an apple. Your argument is invalid.

To re-iterate one final time: I quite enjoyed Back to Bed. It’s a short game, but charming: easy to learn, swift to master, predictably unpredictable, but — amusingly — never so samey that it makes you fall asleep. Whether or not it’s worth the six Steam dollars you can currently get it for probably depends on your personal preferences of length versus content in games: I thought it was a short, but lovely experience, and therefore money well spent.

Jarenth has actually slept quite well today, thanks for asking. It’s not as common as you think! Follow him on Twitter or hang out with him on Steam, for no particular reason.