Gods, but I am tired. It’s ridiculous. I’m unfocused, I’ve been yawning all day today, and I can’t seem to muster the energy for most anything. You’ve ever had days like that, reader? Days that make you go ‘waking up today was a major mistake, I should just fall asleep already’?

I can’t go to sleep, sadly: it’s Monday afternoon and there’s work to be done, nets to be worked, columns to be written. But if I can’t go back to bed, I can do the next best thing and write about Back to Bed, Bedtime Digital Games‘ most recent absurdity-based isometric platformer-of-sorts. Which, writing it down like that, makes it sound a little like this game is nap-inducingly boring. I guess that sounded better in my head, huh? It wasn’t really the joke I was going for, so let me just be perfectly clear here by saying…

Back to Bed’s title screen is weird. Proper weird. 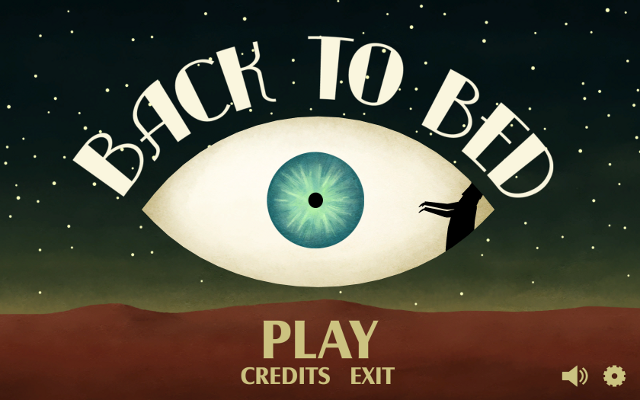 We’ve got silhouettes walking across a giant eyeball: what looks like a sleepwalking man, and a… dog? The background image is sufficiently veil-of-dreams spacey, the electronic music is contorted and eerie, and have I mentioned the giant eyeball?

I check out the options, but they are nothing to write home about. I change the resolution, fiddle with the audio sliders, you get the idea. The only thing that really seems noticeable is the ‘controller recommended’ screen, which displays a controller-example image of the kind I haven’t seen in ages. Which is to say, not a 360 Controller one. 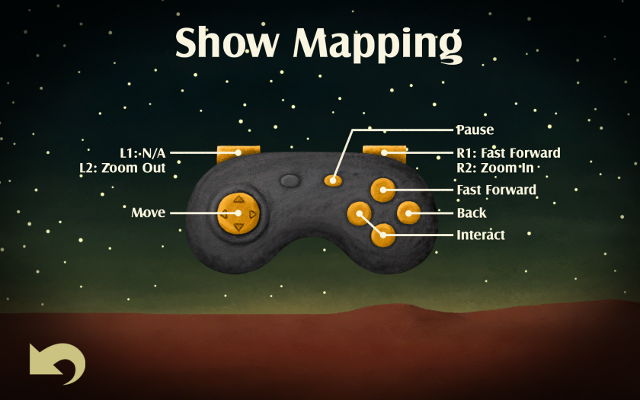 Is that a SNES controller?

I attempt to start a new game. ‘Rooftop Trouble’ or ‘Harbor Hazards’? Well, given that the latter one is locked… And which level do I want, scale of one to fifteen? Again, I’m not sure why you’re asking me this right now, Back to Bed: ‘you can pick any level you want, as long as it’s level 1-1’ is kind of an odd, illusion-breaking way of opening your game. As an introduction of the level-selection mechanic it works, though, which seems to indicate the kind of replayability Back to Bed may be going for.

Level 1-1 starts with a few still frames of Bob. Bob is a narcoleptic. Bob is, particularly, the kind of narcoleptic who will cartoonishly start sleepwalking — eyes closed, hands straight forward, dopey look of contentment, audible snoring throughout — more or less at the drop of a hat. And because Bob lives and/or works in the kind of high-rise building where open windows reach down to the floor, this presents some unique dangers. 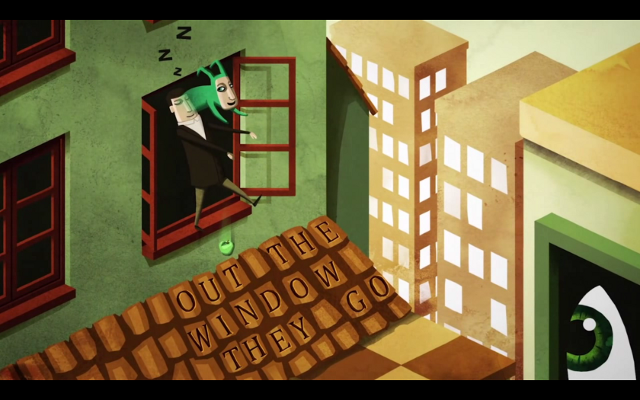 I’m not entirely sure what that weird green man-dog is, or why it’s leaping out of Bob’s forehead. But whatever it is, off it and Bob go, out of the convenient Window of Super Danger and into the Escher-and-Dali inspired realms of Bob’s walking dreams.

Which is where I find myself now. 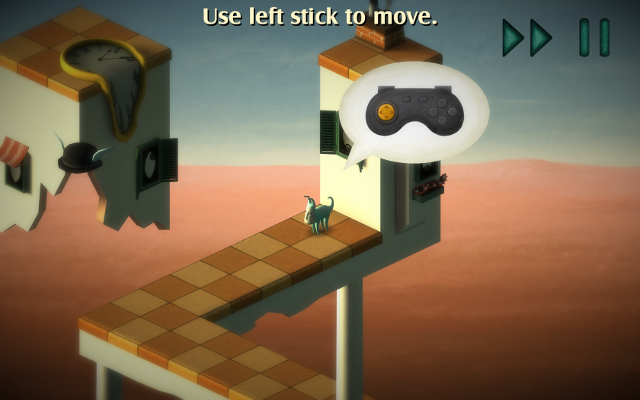 “Get Bob safely to bed”, a strange electronic voice warbles. Seriously, it warbles: that’s the best way I can describe the sound. It’s like someone pulled the text to an automatic text-to-speech agent, except the voice personality is that of Microsoft SAM hopped up on cough syrup. Which still beats regular Microsoft SAM, so bonus points there.

I control Green Man-Dog, a representation of Bob’s subconscious or whatever the hell it is. I can’t very well keep referring to it as that, can I? I dub the creature ‘Steve’. I control Steve, through the time-honored medium of pushing the control stick around and watching him waddle through a zany dream world.

Steve walks through the game world. Steve runs into a giant green apple! A push of either the left or lower button — change as applies to your controller, or keyboard — causes Steve to pick up the giant apple, lifting it above its head. This also causes Steve to start walking on two legs, making the whole scenario seem off, somehow.

Also, Bob is here, in the… ‘room’, with the apple. Bob is walking in a straight line, as sleepwalkers are wont to do, and turning clockwise every time he hits an obstacle, which… I guess sleepwalkers do that? I’ll be honest: my sleepwalker knowledge is limited. 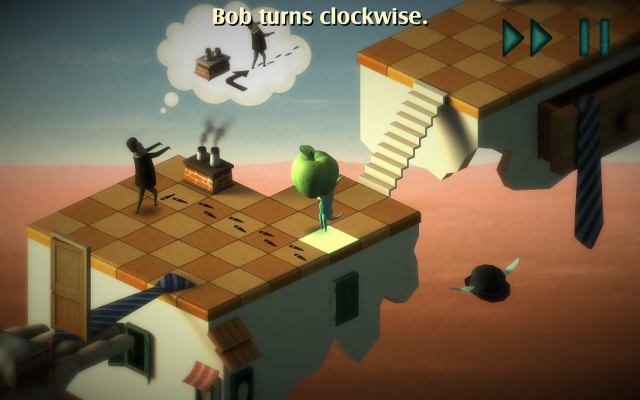 Why wouldn’t he just trip over the chimney and wake up? It’s not very tall.

Bob’s projected path is shown through appearing footsteps, and briefly, I lament. He’s going to walk straight over the edge! What should I do, what should I do? But then, in the bottom left corner of the screen, I see the answer: Bob’s comfortable bed, connected to the main world mass via a necktie bridge. Bob isn’t currently heading in that direction, but remember how sleepwalkers turn clockwise when running into obstacles? And remember how Steve-me is holding a giant apple? 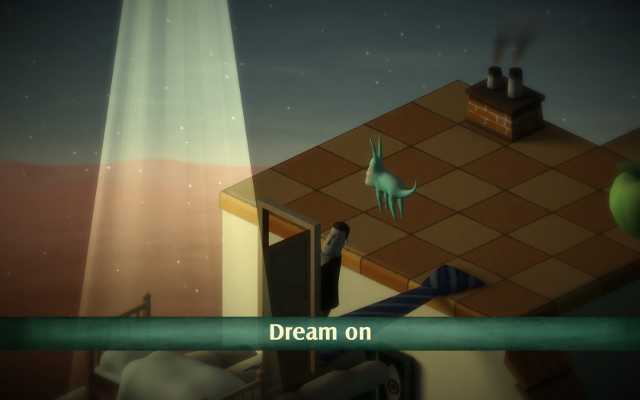 I’ll let you put the pieces together yourself.

Bob walks up to his bed, falls into it, and a lullaby plays as Steve leaps back into Bob’s mind. Level completed. Dream on, Bob.

Level 1-2 is a ‘second verse, same as the first’ situation: Bob, Steve, straight paths, apple, bed. Some chimneys conspire to help me guide Bob in the right direction, which I appreciate. 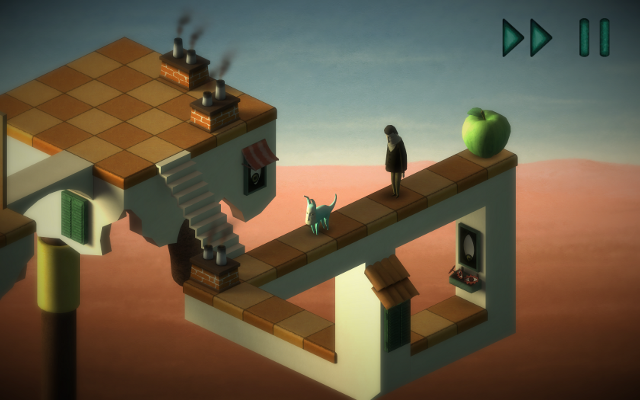 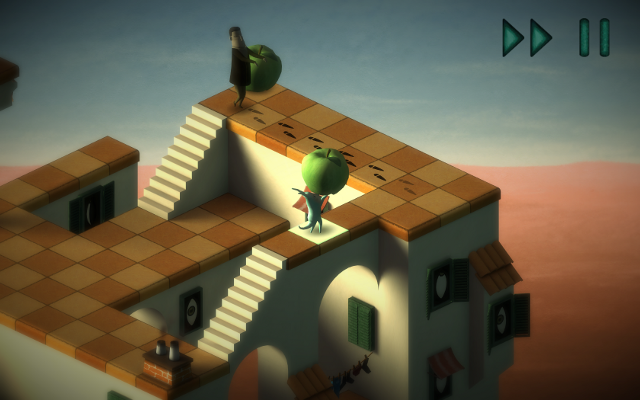 And an even larger, even more impossible-to-parse world layout.

Level 1-3 is quite large, and Bob is not the fastest sleepwalker on the block. Luckily, Back to Bed is on the ball here, introducing the ‘fast-forward’ mechanic: by holding down the top controller button, I can speed up Bob immensely… at the cost of not being able to move myself. It’s alright, though: I’ve set up the Bob-path excellently, and you get a Steam achievement for attempting to move anyway.

In level 1-4, hand-drawn stairs kindly-but-firmly suggest gravity should probably loosen up a little. 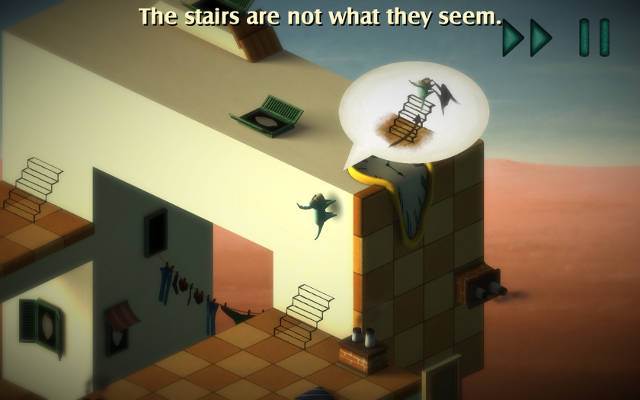 Thanks for the tip, weird warbling voice. I hadn’t figured out something was up yet.

And so on, and so forth. I complete six levels in this way, dealing with weird paths, apples-that-are-hats, shifting gravity, and space-time portals. Did I mention the space-time portals? They’re definitely real, and not a thing I made up just now.

Level 1-6 is different from the others: the usual daytime motif has been replaced by a darker sky, and more floating eyeballs. Completing this level triggers another still-frame cutscene, referencing all the cool stuff I did just now. 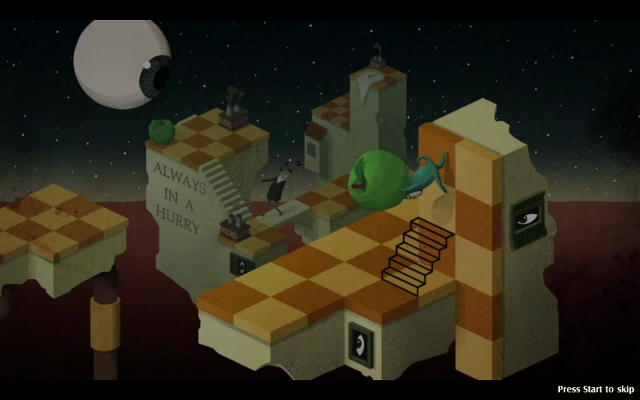 Oh, man. Remember that stuff we just did? With the apples, and the chairs? And the chimney?

I choose to believe this cool cutscene represents a neat stopping point for this section of the review. Doubly so because the level right after it continues on in the same renewed aesthetic. I’ll see if I can’t guide Bob to bed-safety through the Rooftop Trouble, and maybe even throughout the Harbor Hazards. I’ll get back to you once I do, or — in the unlikely event I fail at doing this — never ever not ever.