My friend and I were talking about recent MMOs the other day, and he shared with me his disappointment with Wildstar. He said he liked the art style and the concepts behind the world, but the combat was unremarkable and quest system was completely standard MMO fare, i.e. like World of Warcraft. He felt a similar sentiment toward The Elder Scrolls Online — a solid idea with very bland execution. We both reflected on our failed attempts to find an MMO that could satisfy us.

One sentence of his really stuck with me: “I mean, I like MMOs, but I… I don’t like MMOs.”

This is exactly how I’ve felt for a long time. I had some fun with Guild Wars 2, but my interest in that game died once I hit the level cap and discovered the sad lack of decent endgame content. After that I looked back at all the time I’d spent playing it and felt horribly unsatisfied, much like I’d feel if I ate a giant bag of potato chips for dinner.

GW2 did a bit to mix up the usual four-or-five-hotkey-mashing timesink of MMO combat, but ultimately it still felt like more of the same. I was still pressing a few hotkeys and watching my character do the same few sword-swinging animations over and over and over and over to make baddies immediately in front of her fall down. It still felt flaccid and uninvolving, like every other damn MMO.

Recently I discovered that Firefall is now free-to-play on Steam. 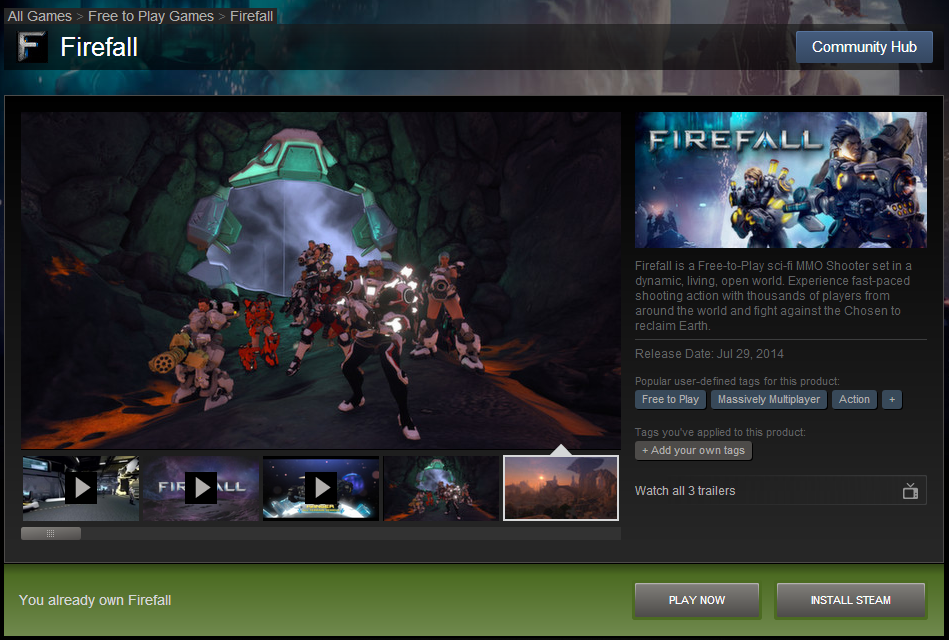 I swear I did not discover this by watching Yahtzee’s recent review of it. I swear on the grave of any family member you choose to name, I actually first started playing Firefall on Tuesday, the night before Yahtzee’s review. So ha! But I’ll also say that some of Yahtzee’s points in his review are definitely points I would have made about the game.

Yes, I’m primarily enjoying it right now (though it’s only been a few days) because its combat is actually entertaining to me. Swarms of little baddies and occasional big baddies jump at you and you shoot them down with fun guns. I chose Assault, like Yahtzee, so I can agree that the primary grenade launcher with the secondary fire shotgun-type-thing is a great fit for the horde-style gunplay. This game doesn’t really incentivize tactical elements like crouching and standing still. It’s about constant moving and shooting, and it encourages you to take advantage of your jetpack.

When enemies die they drop money, health, ammo and occasional powerups. Powerups! Man, remember back when we used to pick up powerups in shooters by running into them? Firefall feels like a fast and loose run-and-gun shooter for the modern world. Kind of like Borderlands, with more satisfying weapons, an MMO world, and best of all, a jetpack. It also uses voice acting in its quests, which I remember thinking was a big benefit in Borderlands 2. 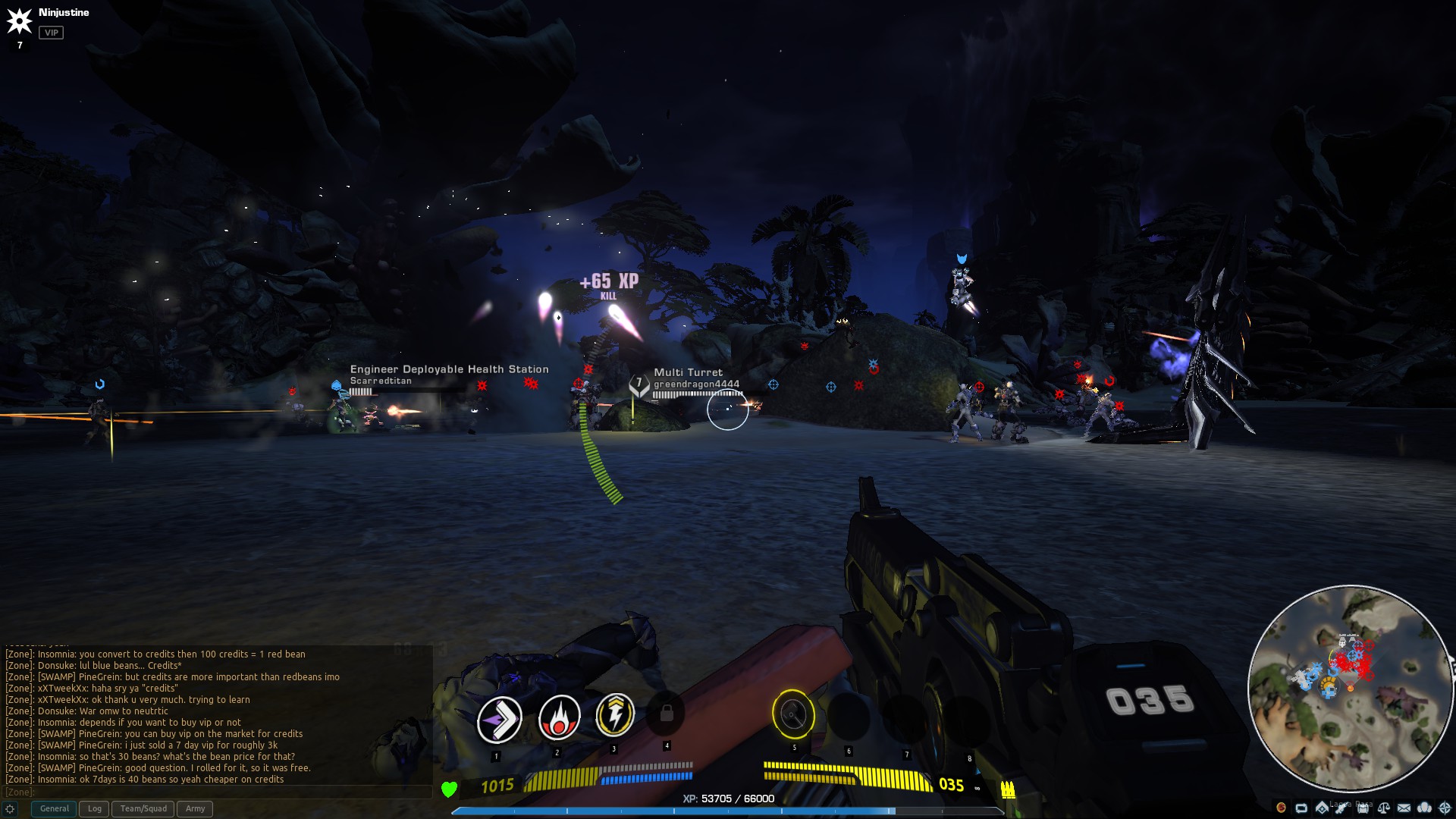 You pick up quests from a job board, and those are specific to you and your party. I’m pretty sure they’re continually generated, because there were plenty more at the level 1-5 area after I’d reached level 7. (This is probably because you can play as each class with one character and each class levels up on its own.) But! There are also random events that occur in the wilderness, sort of like in Guild Wars 2, and everyone involved in that event is rewarded for it. This can result in really exciting and chaotic firefights, like the one you see above. Engies were dropping sentry turrets, recon troops were sniping, medics were running around firing healing waves. It was fun for the whole family.

I will say that I’m a bit bothered by the monetization. As usual for free-to-play games, rather than buying persistent account upgrades for single costs, you can either pay a monthly >$10 subscription for “VIP” status or buy one-time-use items for convenience. I don’t like this. I’d rather throw down a wad of cash for something that will upgrade my account forever. But that’s just me, and I suppose my idea of a “good” price model isn’t necessarily the most financially beneficial one for MMO publishers.

Point is, I haven’t played it for long, but I’m enjoying Firefall. I’m hearing friends say they didn’t like it. Whatever. Maybe I’m weird, but I’m having fun flying around and shooting big bugs. Maybe some of you would too. That’s why I’m excited to announce that I’ve started a Ninja Blues guild in Firefall! Well, it’s called an “army” in this game, not a “guild.” But this is where, if you guys find yourselves liking the game, we can make use of the Ninja Blues Steam group I made. Join the group and message me on Steam with your Firefall character name, and I’ll try to hit you up with an invitation to the army.

I’m not entirely sure what armies do in Firefall, but I’m figuring this game out as I go. We can figure it out together.