Crypt of the NecroDancer

Now, I said I’ve been ‘tracking’ Crypt of the NecroDancer for a little while. But I’ve been doing this ‘tracking’, air quotes non-optional, in my own peculiar way: checking social media, reading interviews, catching news snippets, and never ever actually looking at any gameplay footage of it. I didn’t want it to get spoiled to me, you guys! I knew quite a lot about Crypt of the NecroDancer before launching it for the first time ever last week, except how it actually is to play.

Which is how I’m probably the last self-professed NecroDancer enthusiast to discover that, oh my glob you guys, this game is so much fun. 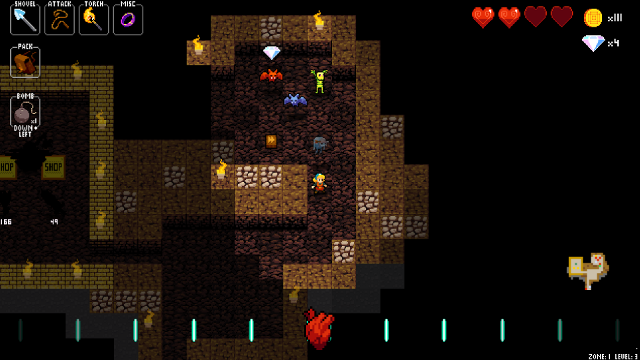 Fun and vibrant and colourful and *look at the happy bats*!

At its core, Crypt of the NecroDancer is basically a roguelike. It takes place in a procedurally, semi-random-generated world, consisting of discrete tiles (squares, in NecroDancer’s case), and populated with dangers, treasures, and enemies. It has discrete turn-based gameplay. It features simple combat that involves movement, and getting close to enemies. Its gameplay goals revolve around reaching lower and lower dungeon floors. And it’s characterized by difficult, lethal gameplay, coupled with permadeath, but softened by the presence of a permanent meta-game upgrade system.

All the elements of your basic roguelike, yes? Glad we’re all in agreement here. Crypt of the NecroDancer has all of these elements, and more: destructible terrain, unlockable characters, daily dungeons…

But obviously, Crypt of the NecroDancer’s most crucial feature is that everything’s set to a rhythmic beat. 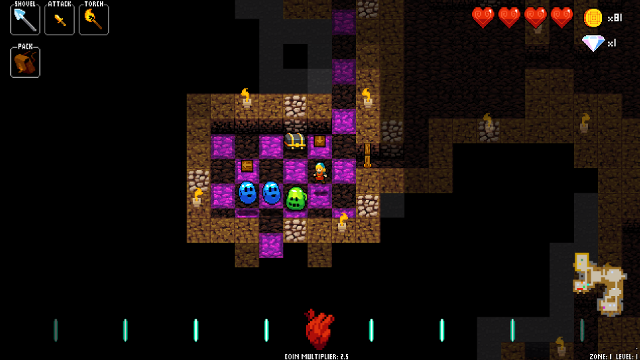 The goal of a session of Crypt of the NecroDancer is to make your way through a set number of dungeon floors. On every floor, you kill monsters, find gold and treasures, and finally defeat the boss and unlock access to the next floor. Or, you know, not. Every dungeon’s bottom floor hosts a special, thematic bossfight, which I won’t spoil for you. Partially because I’ve only managed to clear the first two myself. 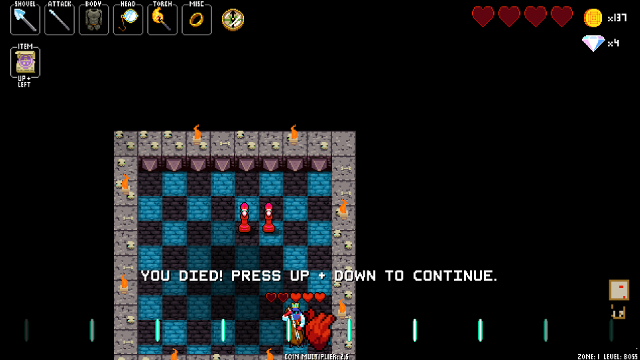 There are no spoilers here. Clearly, you are mistaken.

Moving through Crypt of the NecroDancer’s dungeons is, theoretically, a relatively simple affair (at first). You can move one square at a time, in the four cardinal directions. You start off equipped with a dagger, which allows you to attack enemies directly ahead of you by bumping into them. And a shovel, for digging. Enemies move too, in certain preordained patterns, and being in the square they’re standing in means heart damage for you.

It starts that simple, but both you and enemies escalate. You can find different weapons, which allow you to attack in different ways: a spear for two squares ahead, a broadsword for three squares across, a rapier for lunging… different armors, shovels, consumables, torches, scrolls, spells. And all your equipment has a material descriptor, too: gold equipment nets you extra money, blood equipment heals, glass equipment is powerful but prone to shattering. And so on, and so forth. On the other side of the equation, your enemies quickly move beyond the body-check as a method of attack as well. 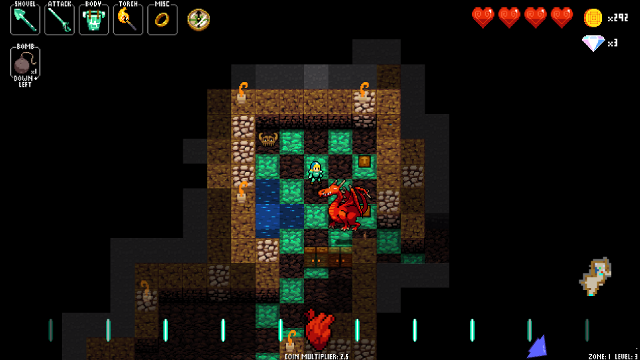 Pro tip: do *not* hang around in front of this guy for too long.

In more traditional roguelikes, like some games I could mention, movement tends to be slow and turn-based: the player takes a turn, the enemies take a turn, the player takes a turn, and so on and so forth. But this is where Crypt of the NecroDancer sets itself apart from… well, every other roguelike I’ve seen so far: its turn-taking it determined not by the player’s actions, but by the rhythm of the background music.

In Crypt of the NecroDancer, you move to the beat of the music. Which is to say, both the player and the monsters are allowed to move once on every musical beat. I say ‘allowed’, because not all monsters do one move per beat. And you-the-player don’t have to move each beat… but missing a beat (and/or getting hit) resets your combo counter, which increases the amount of gold you earn from defeating monsters. And just because you’re standing still, doesn’t mean your enemies are. In practice, it usually tends to be in your best interest to just move around as much as possible.

This relatively simple system, combined with the easy, catchy background beats that Crypt of the NecroDancer currently comes with, has this amazing transformative effect on the roguelike experience. Crypt of the NecroDancer is just so… active, all the time, so vibrant and energetic and moving and busy. Both your character and the enemies don’t simple move from square to square, they hop. They dance. And I, player, found myself not just tapping buttons to get by, but actually getting into the swing of things. Tap, tap, tap, foot-tap, foot-tap, foot-tap… It’s an incredible kind of sensory immersion.

And the entire rest of the game supports this sensory flow-state, too. Once
you get into a beat combo, the floor tiles light up in alternating disco colours — which is both super neat, and a handy visual way of helping players discern where tiles start and end in a fast-paced game like this. And guys, the shopkeepers that you buy items from? They sing along with parts of the background music. 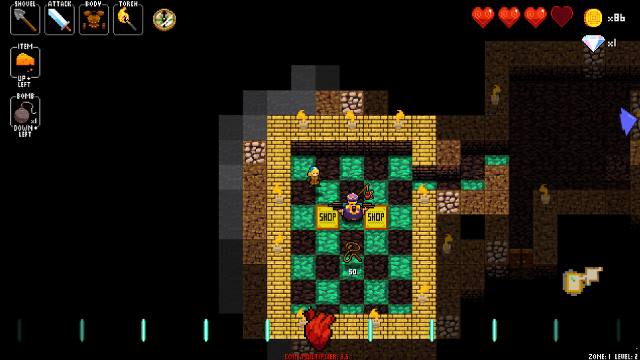 And that makes me inordinately happy.

Oh, and while we’re tangentially on the subject: can I just say that the inclusion of the beat-heart at the bottom of the screen is a great move for accessibility? As someone who professionally works with people with various kinds of disabilities, I appreciate that Brace Yourself Games took the effort to make their rhythm game playable for those of us with hearing impairments. It’s something you don’t nearly see enough in video games, and it deserves to be lauded.

At the risk of stepping on Campster‘s turf, playing Crypt of the NecroDancer is incredibly kinesthetically pleasing. It has good gamefeel. Your body gets into it, your brain hooks into the rhythm. It’s a happy bouncy flurry of rapid decision making, choice and bounce and bounce and choice and shit, did a minotaur just burst through the wall, boing boing I guess I can try to bait it boing boing oh wait there’s one of those screaming dudes boing can’t go that way boing boing maybe I can tunnel into a another area boing dig boing dig hey, is that the shopkeeper I hear singing? And so on, and so forth. It… I want to say that engenders its own kind of reflexes, a rapid situational awareness tempered by the fact that no matter what you want to do, you should probably keep moving. You want to keep moving. Why would you not keep moving?

In-between dungeon runs, Crypt of the NecroDancer hosts a meta-hub with unlockable upgrades of various kinds. One merchant sells new items for your dungeon, a second one sells magic, a third one sells heart and coin upgrades, and so on. Upgrades are purchased with diamonds, which you can find in the dungeons: both out in the open, and hidden in the walls. That you can dig through. Have I mentioned you can dig through walls yet? 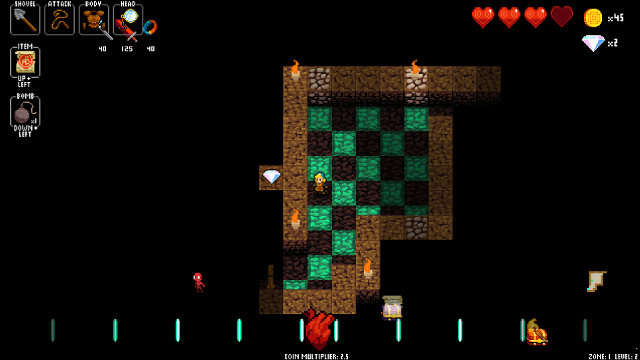 How *else* would I get to this tantalizing diamond?

The meta-game upgrade system provides a good sense of permanent progress to Crypt of the NecroDancer. It’s not so much a way to make it easier as it is a way of making it larger: most upgrades add items and spells to the game, while only a few of them genuinely make you stronger. And even then, not that much stronger. The complaint can be leveled that all systems of this kind basically constitute game-padding grinding — see, for instance, Rogue Legacy — but it doesn’t often feel that way in Crypt of the NecroDancer. Skill, knowledge, and rhythm are much more important to success than the number of items you’ve unlocked. 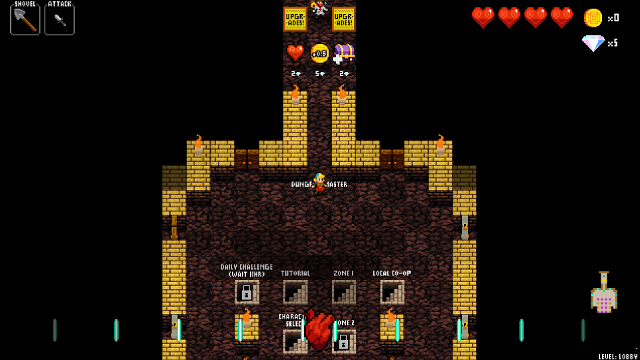 With the possible exception of this Dungeon Master fellow, who just straight-up makes you more powerful.

My enjoyment of Crypt of the NecroDancer strongly reminds me of another game I sank way too much time in, and that’s Spelunky. Both are mostly skill-based games, but with elements of both randomness and pattern recognition. In both games, you’ll get the best experience over time, as your skill grows through repeated play and your knowledge grows through either experience or wiki-reading. And both games have daily quests, and leaderboards for bragging in the general direction of your friends. Both have an absolute wealth of content, and enough randomness and reflex action that each death is both total bullshit and a learning moment. I guess The Binding of Isaac would fit that list pretty well too, come to think of it. Which means I think I know at least one person who’s likely to enjoy this game.

Crypt of the NecroDancer is currently available through Steam’s Early Access program. But I’ll be entirely honest: I wouldn’t be able to tell you what’s still in-development. As-is, Crypt of the NecroDancer offers an incredibly complete experience, including: four complete zones, each with their own distinct tileset, graphics, music, and enemies. At least five NPC merchants, and at least a few dozen upgrades. Unlockable characters. A daily challenge mode, a hardcore mode, a dance pad mode, and a dance pad hardcore mode.

Yes, Crypt of the NecroDancer has dance pad support. Of course it does. And I genuinely think I could get a large portion of my daily workout done that way, if I could find a mat for cheap.

Crypt of the NecroDancer currently costs €15, or equivalent. Fifteen bucks for a unique, engaging, immersive experience about dancing your way through an evil wizard’s music dungeon, chasing the beat of your stolen heart. And the nature of Early Access means it’s only likely to get better, as time goes by.