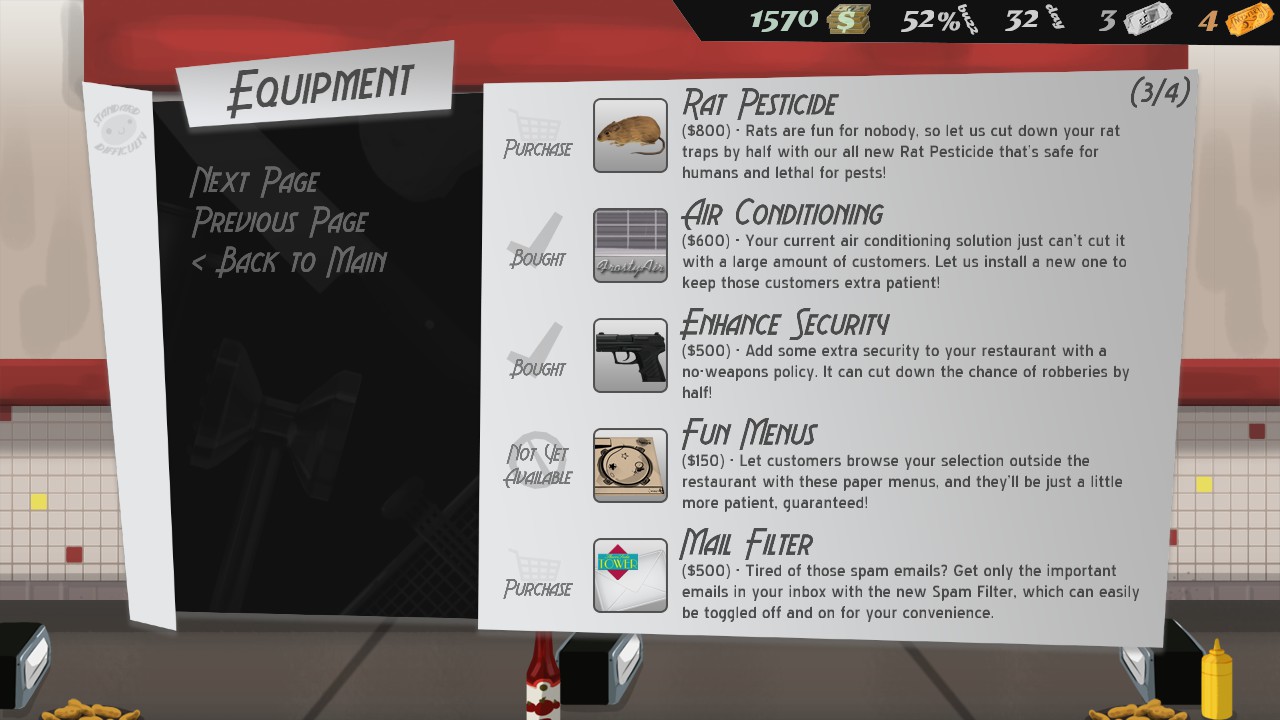 Management is a lot of what you’d expect. You use the money acquired during the day and spend it on things to benefit you. But this is no Assassin’s Creed 2 bullshit of just spending money to get more income. During management you purchase new foods, choose which meals to serve during the next day, save up for store upgrades, upgrade specific meals to be worth more (the Chicken Breast is my biggest cash cow of the moment), and so on. What’s interesting is that all of these affect restaurant-running both short term and long term. Each upgrade changes something little — you can make chores shorter and less frequent, make customers more patient, and nab equipment that unlocks more food.

The most prominent aspect of management is unlocking and choosing what food to serve. This is where customization comes into play. There’s a lot more to food than money — there’s a robust “buzz” mechanic wherein each food provides positive and negative buzz based on situations in the restaurant, and your total buzz determines how many customers you’ll get each day. Some foods are more suitable for rainy days, like soup. Some foods are more favored in the morning, like coffee, whereas beer will bring in more customers in the evening. 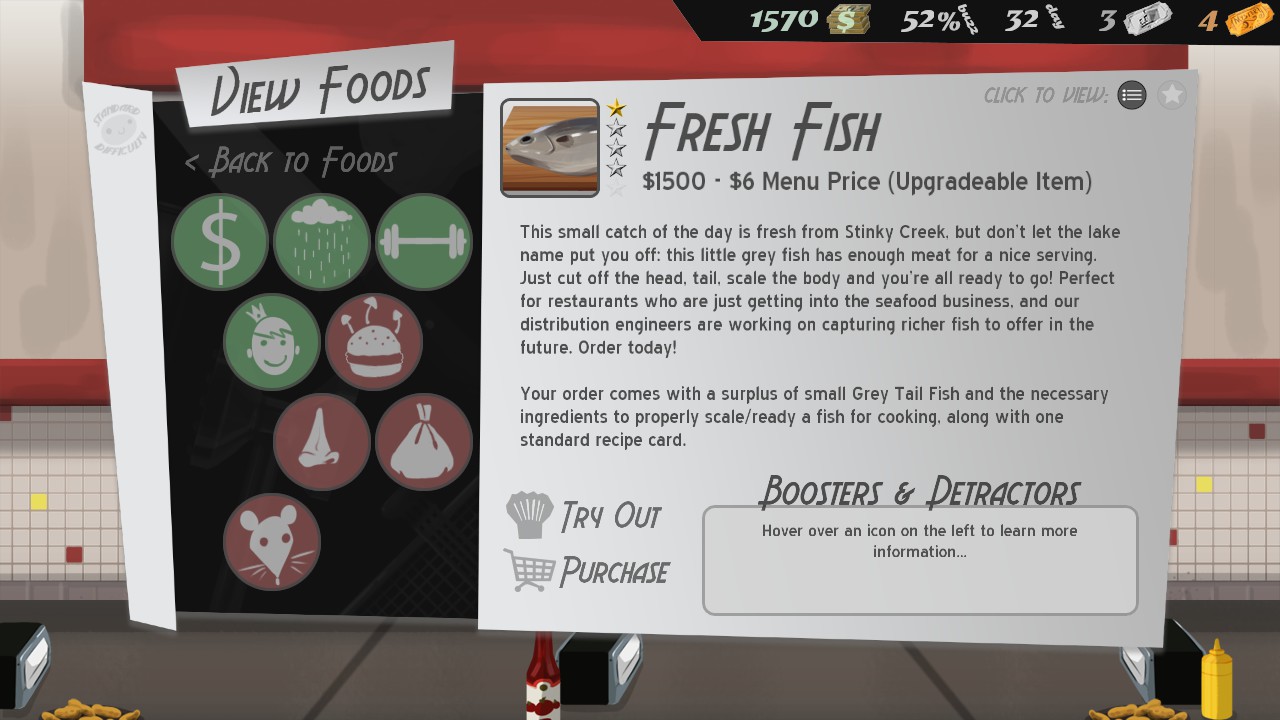 There are always trade-offs for every food, making you really think about how you want your restaurant to run. Meals like soup, pasta and fish will give you high buzz for attracting “health nuts” and generally being perceived as high-class, but they also take more time to produce and will create more trash to throw out and more dirty plates to wash. Unhealthy foods like pretzels and fries will lower your buzz if your menu is full of them, since it makes your customers feel like fatasses, but they’re quick to prepare and aren’t as trashy, so it’s easier on you during rush hour.

There are more facets to the whole system, but the point is that it gives you a lot to work with in terms of setting up the kind of restaurant you want to run. And I’m not just talking cosmetic fantasy fulfillment there — I’m talking about the moment-to-moment gameplay. Do you want to spend a long time cooking fancy dishes and bringing in the rich cash for it, or do you want to make it a fast-food joint and bring in the bucks through quantity rather than quality? Or do you want to mix and match? It’s all doable, and all have consequences for you as a restaurant owner.

Isn’t that… Isn’t that awesome? 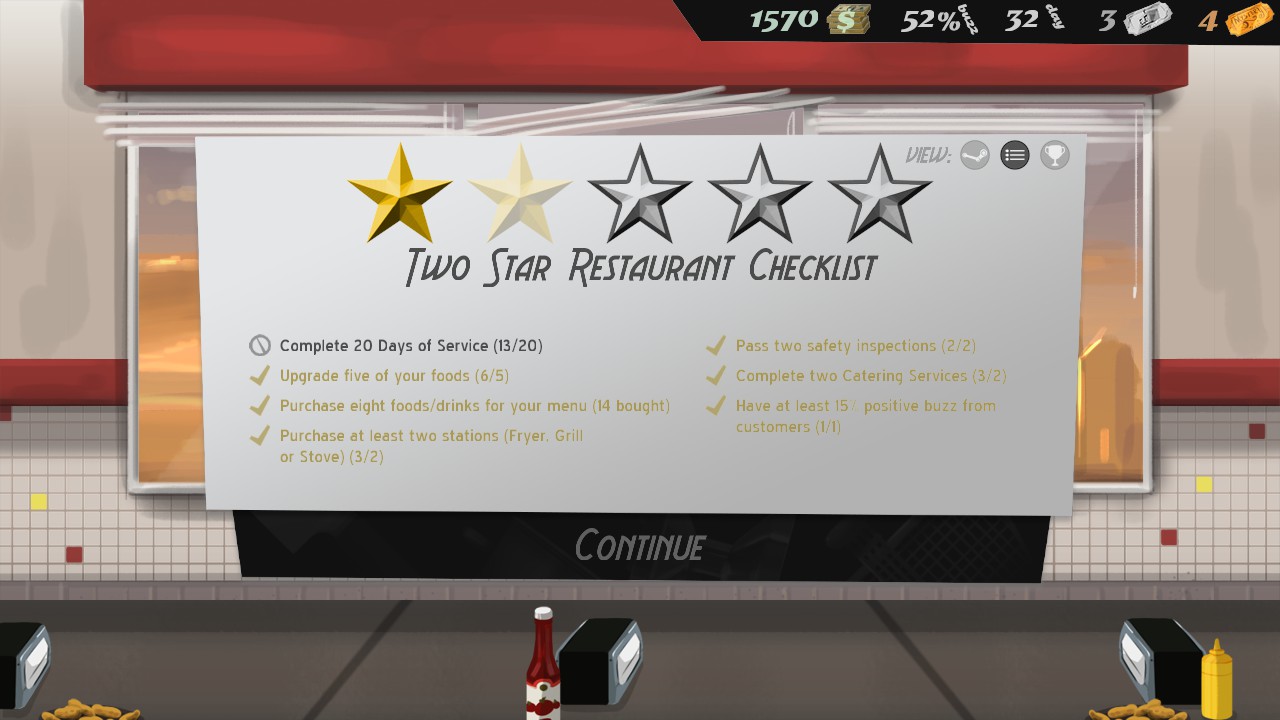 I will say that progression is weirdly slow. You start out as a zero-star food joint, and the goal as established at the start is to grow into a five-star restaurant and compete for the title of “Iron Cook.” I’ve been playing on a daily basis for nearly two weeks, and as you can see, I’m not even at two stars. It takes a minimum of 20 days to get from zero to one, and then from one to two, and I’ve met the minimum both times.

I’m not struggling on any of the other objectives. I’ve established myself for being good enough to complete every other two-star challenge, but I have to run the store for seven more days before I can progress. At that point it’s not about skill, it’s about length. It’s about patience. And I don’t know if that’s a bad thing or not. I certainly don’t mind working more days, but I’d like progression to be quicker. But then would I feel as satisfied when I reach the end? I can’t say.

And lastly, as a complaint, I find it really strange that for all the gameplay-altering choices available, there are absolutely no cosmetic customization options I’ve run into so far. I found it kind of bizarre that the only location available is a restaurant in a towering office building, but I understand that that’s important for the game balance — the only drawback to beer is that serving alcohol in an office complex is arbitrary frowned upon — but beyond that, I don’t get to name my restaurant or choose how it looks. I get that it doesn’t affect much, but I’d still really like to have that choice. It’d contribute to me feeling like I’m running and expanding my own restaurant. 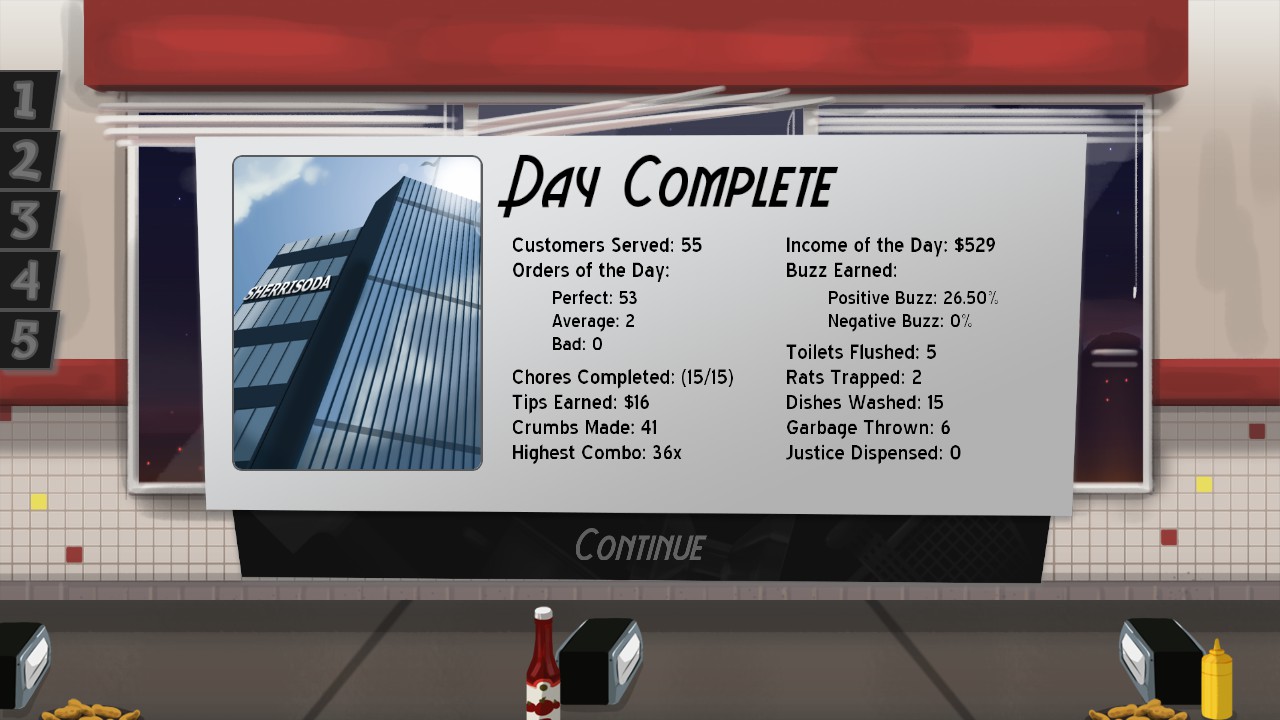 That certainly doesn’t quite ruin the satisfaction of a well-played day, or the compulsion to keep playing more days so you can buy more foods and upgrades and reach that next star. On the whole, Cook, Serve, Delicious! greatly surpassed my expectations. It’s important that this exists to remind us that for all the garbage flooding Steam’s gates these days, the simulator genre isn’t yet a total dead zone for creativity and joy.