I’ve been out of town for the past few weeks and I’m not headed home until Saturday, so I wasn’t planning on writing any content for you in the meantime, but then on Monday Jarenth posted a spectacular review of Skyscraper Simulator. It’s a scathing review of something that truly deserves to be scathed, which is generally delightful enough to read, but it was particularly interesting for me because I’ve been playing a sim game lately called Cook, Serve, Delicious! And I’ve found it to be a joyous experience.

I knew I had to write my impressions about it. 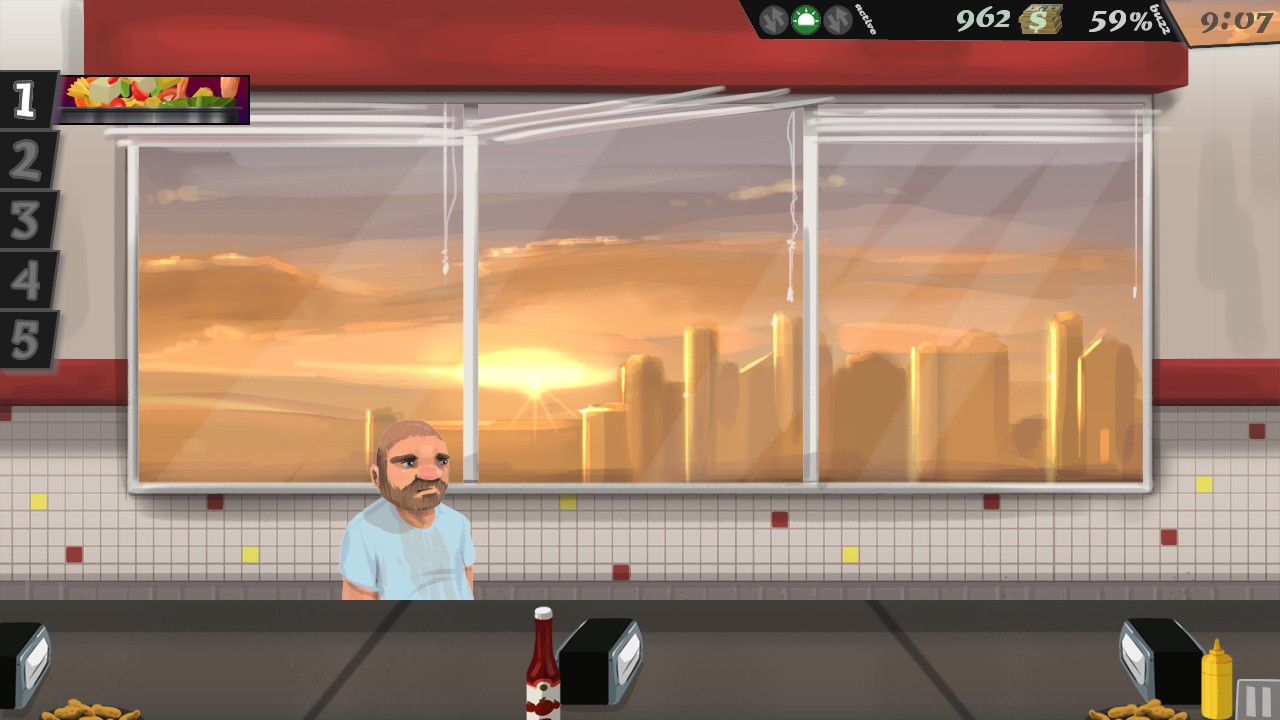 I guess this week is Sim Week on Ninja Blues, huh? That’s an odd week-long theme, though it’s worth noting that Cook, Serve, Delicious! doesn’t have “Simulator” at the end of its name. That might be an indicator right away of it not being abhorrent shovelware. The screenshots help too! They show off an art direction that’s distinct, flavorful and easy on the eyes, sharply contrasting with the usual “realistic” look that most sim games go for. That made me interested, but skeptical — it wasn’t until a recent Humble Weekly Bundle put it and two other games for $1 that I jumped on it.

Really, I’ve been trying to wrap my head around why I like CSD so much, and I’m certain that the looks and sounds play a large part. I was not expecting the game’s music to grip me so well, but this is the first game in awhile that’s made me find and buy the soundtrack so I could keep listening while I wasn’t playing. It mostly consists of the sort of jazz and lounge music you’d expect to hear in an elevator. (Or, you know, in a restaurant!) It’s got smooth tunes for everyday food-serving, fast tracks for rush hour, and a relaxing, chilled-out groove for the management menus. I’m gonna level with you — I sometimes find myself snapping to the music unironically. Very little music has that effect on me.

The music and the visuals combine to give you a great sense that you’re running a bustling, breathing restaurant, albeit one perpetually in fast-forward.

But all that wouldn’t amount to much if it didn’t also have rock-solid gameplay. 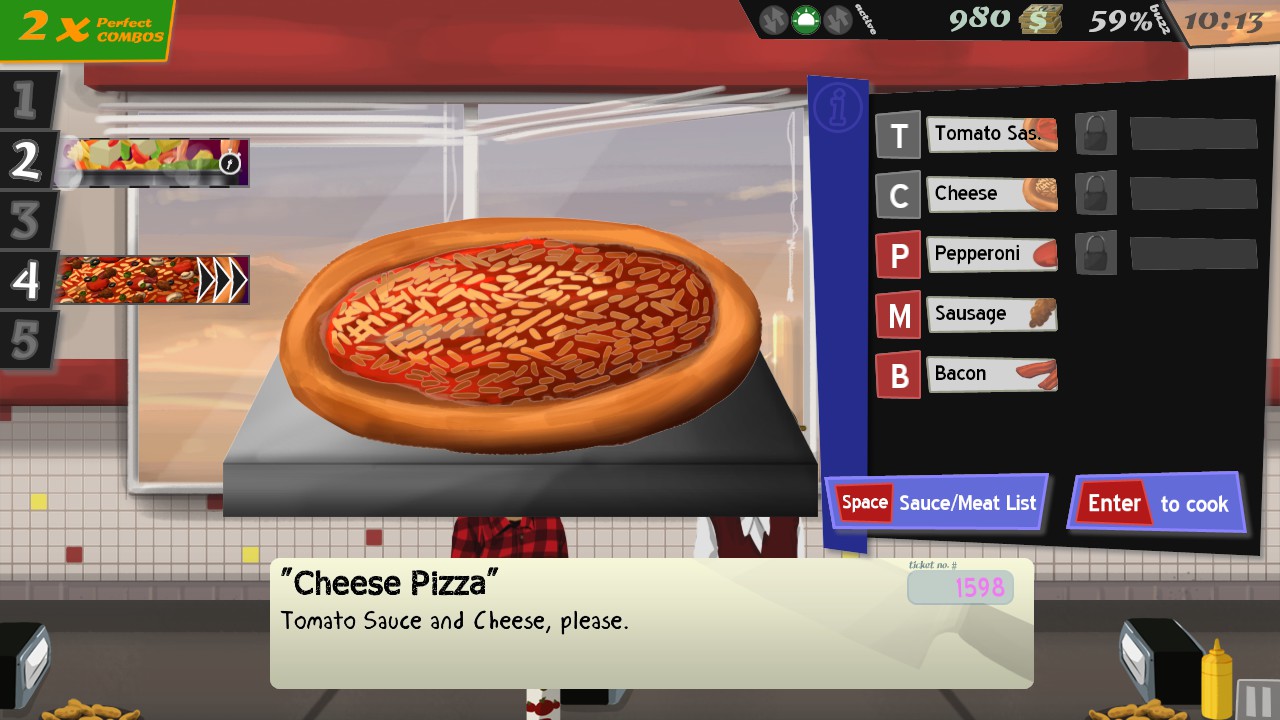 CSD takes on an X-COM-esque two-face approach to gameplay. In one, the one you’ll be spending more screen time on, you’re taking orders, cooking food and serving it out. That sounds boring. I know it does, because it’s the reason I stayed skeptical of the game for so long. But I’ve found it so satisfying that I keep coming back for an hour a day for more. (Ask my girlfriend, I’ve certainly bored her with it.)

Part of that is because of the aforementioned audiovisuals, but it’s also got to do with how “snappy” everything is. You tap the “sausage” button and sausage is slapped on the pizza instantly. No fussing with buggy physics engines to hurl food on a plate. The controls are tight and carefully bound to deliver just the right amount of challenge vs. convenience. To pour coffee into a mug, you just tap the down key. Then you add the amount of creamer and sugar cubes requested. To pour out a beer mug, however, you have to hold down until it’s filled up just enough to froth above the top, as that’s the only challenge presented in preparing beer. 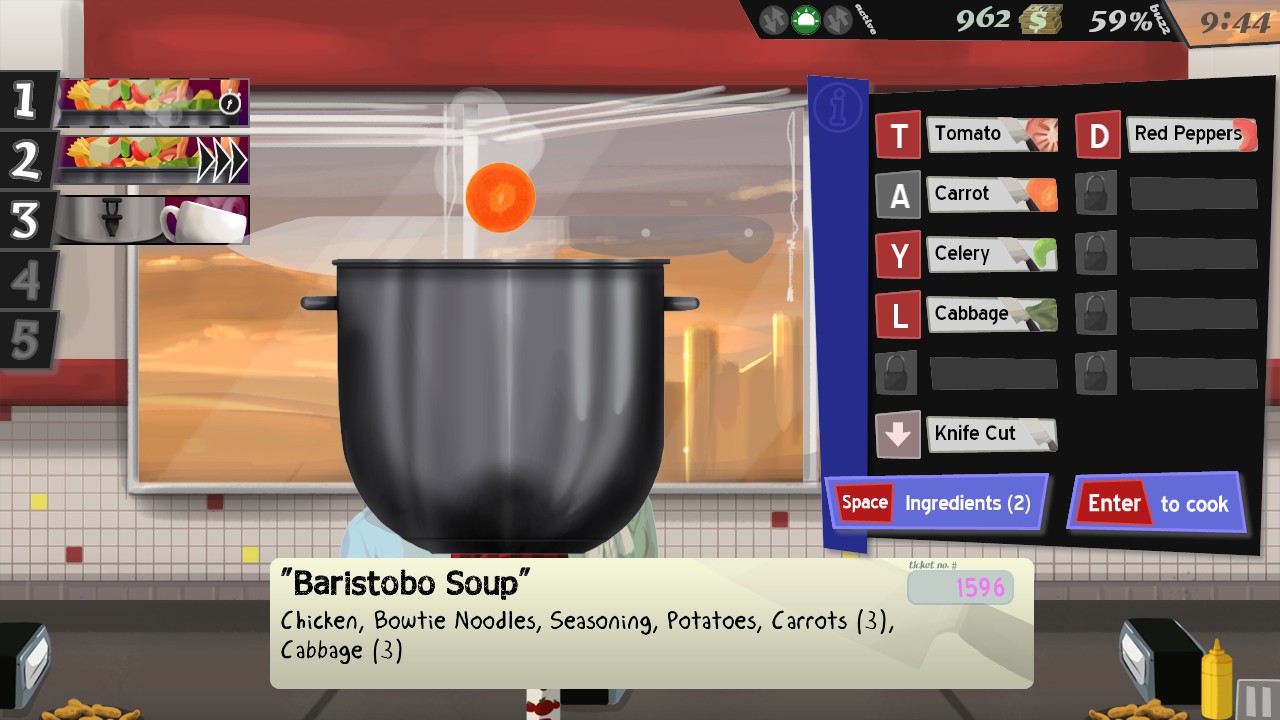 And every action makes a lovely little sound effect corresponding to it, too. Toppings make a nice “slapping” sound as they’re thrown onto a burger or pizza, tenderizing a chicken breast makes the same sound as hammering a nail, so on and so forth. It adds up to really nice “game feel,” or “kinaesthetics,” or whatever the hell you want to call it. It’s something I expect from a shooter, but definitely not from a restaurant sim, so I was delightfully surprised.

The true challenge in CSD comes from getting lots of customers during a busy time and trying to juggle them all without messing up each individual order. When my restaurant was smaller and getting fewer customers I found it trivial to complete day after day without a single mistake. Now that my restaurant has grown, a perfect day is a much more challenging prospect, because as more and more orders sprout up at a time it becomes increasingly easy to accidentally hit O instead of P and give a customer onions instead of peppers. It’s a fun kind of challenge, though. It’s quick, it’s easy to learn, and it’s both tough and rewarding to truly master.

Then there’s the other side of CSD: The management sim.