After a brief break and some needed self-reflection, I went back into Skyscraper Simulator. I put my skyscraper on the market for rent, turned time up to three times speed, and watched at the rent money rolled in. And once I had accumulated a decent amount of cash, I… (sigh) bought some more land, and started another skyscraper construction project.

For reasons that elude me, this time, I could actually select different kinds of skyscrapers. I opted for the ‘Victorious Number One’ model this time, as it at least looks nice and futuristic. 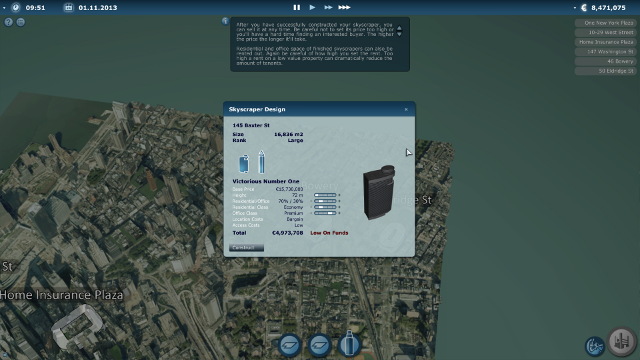 It’s also quite cheap to start with, and I basically turned it into even more of a dump.

While the graphical side of things looked slightly different from Towering Violet, constructing Victorious Number One was basically the exact same experience as before. I hired workers, bought machines, jiggled with numbers, and watched time fly by. I did try to act a little more responsible and efficient, this time around, as I actually went over budget on my previous tower: the final tally came out to €20 million instead of 17). So instead of ‘just’ hiring machines, I tried paying attention to price versus condition and performance. And instead of just hiring ‘X of anything’, I tried taking the efficiency bars into account in my decisions.

In the end, my diligence was rewarded when my tower came in a negligible amount of time earlier. Still over budget.

Then, I built another tower. 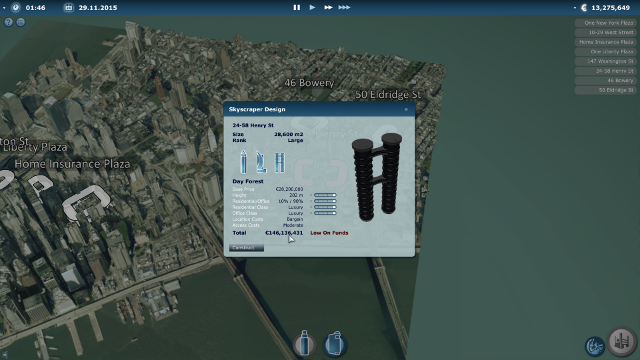 As close to a penis shape as I’m ever likely to get, I think.

It turned out alright. Here, you can see it in the overworld map. 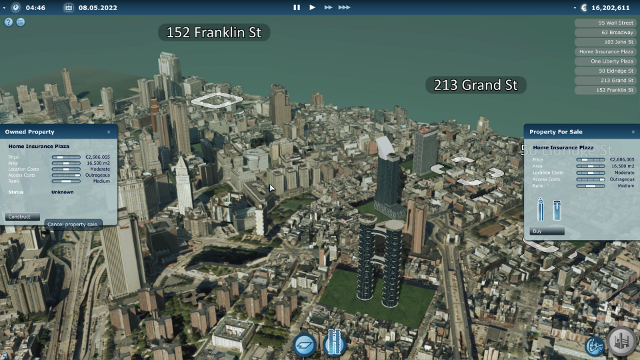 Along with Towering Violet, Victorious Number One, and another tower I built in the meantime.

And then I… just kind of stopped, I guess?

No, that’s not entirely fair. I noticed that finishing skyscrapers on properties takes those properties off the market forever… and that buying a property, then selling it un-developed, has the same effect. So I attempted to ‘finish’ Skyscraper Simulator by buying all properties immediately, then selling them at loss as fast as I could. It was a good plan, and it worked…

…except then I saved, and loaded, for some reason, and all previously sold properties were made available again. 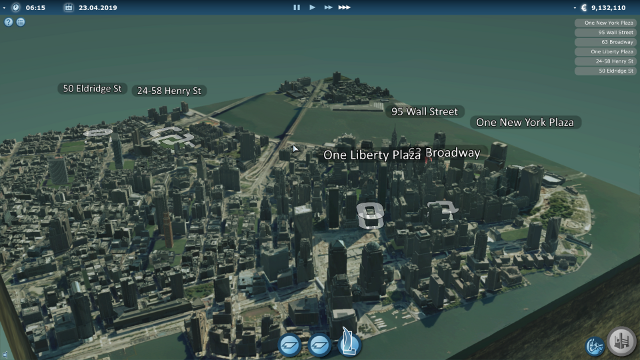 A phrasing like that is harsh, coming from my perspective. It’s harsh from anyone’s perspective, but I in particular almost never go full-anger on games in this way. But holy hell, if ever a game did deserve this kind of treatment…

You need to understand how I’m feeling here, because Skyscraper Simulator has me pretty torn. Not in the usual, it’s-good-but-also-bad way. No, I’m torn between either writing a negative, nit-picky review about it here, or just walking away. The sooner I can start forgetting about Skyscraper Simulator, the better.

Sadly, professionalism wins out yet again. Onto the bile!

A combination of factors brings Skyscraper Simulator this low. First (though not necessarily foremost) among these is the fact that its high-level gameplay loop is utterly uninteresting. 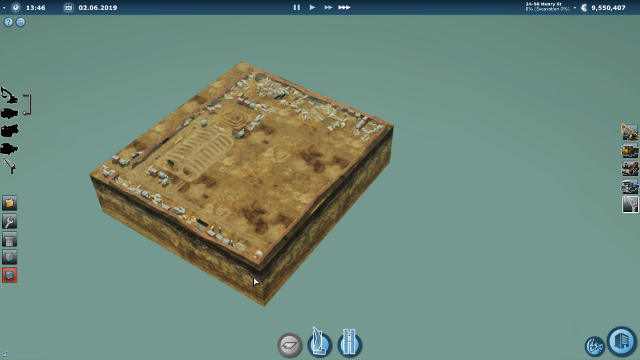 There is nothing interesting in Skyscraper Simulator besides the buy-build-sell loop. Nothing else to spend money on, nothing to achieve, nothing to do. You just jump through the same three or four hoops for as long as you can stomach doing so.

And it doesn’t particularly feel as if money unlocks any more options, either. Sure, you can twiddle with your skyscraper sliders in larger degrees of freedom, if you have the cash. Do you want your skyscraper to be one hundred imaginary meters, or two hundred? Or three hundred? And what should the spread of office buildings versus condos be? And how fancy are they both? It’s just too bad that these choices are never actually reflected anywhere. And apart from this, there is literally nothing you can do with money in Skyscraper Simulator.

An uninteresting high-level loop is not a damning offense in and by itself, though. I could make a lot of games sound bad this way. If the core gameplay in and by itself is engaging, does it really matter that you’re not really going anywhere.

Unfortunately, as I hope my previous page has demonstrated in detail, Skyscraper Simulator drops the ball here as well. Its core gameplay is an incredibly dull, hands-off affair, an auto-playing number juggler where you watch a few animated gifs play out in super slow-motion. 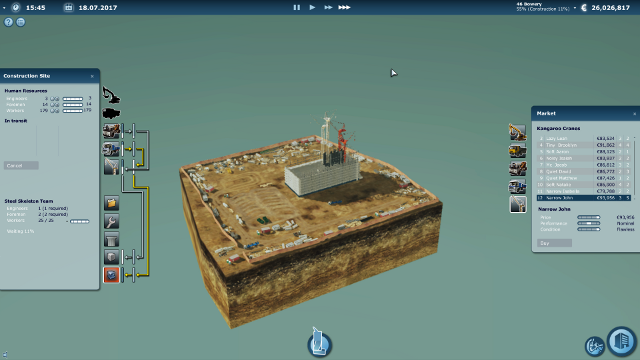 In building skyscrapers, Skyscraper Simulator offers almost no interesting decision making. You always need to get the same machines, in the same order, in about the same proportions. You always have to apply workers and engineers and foremen, the desire for which you know so well in advance you might as well hire the requisite numbers immediately. The closest to engaging gameplay Skyscraper Simulator has is you selecting which machines to hire, what prices to pay for what levels of performance and condition, and when your game’s most engaging feature is being a HR spreadsheet with flat graphics, you know something went wrong somewhere.

Alright, this is unfair. In theory, there’s a lot of decision making in Skyscraper Simulator. The more machines you buy and the more workers you hire, the faster the skyscraper is completed. And the faster the skyscraper is completed, the less money you’ll have to pay over time for machine leases and fees. But if you hire more workers to be done faster, will the gains and the associated losses cancel out? Maybe you don’t need to hire ten workers for every machine: if the excavators are already working harder than the dump trucks can match, maybe you can reduce the support crew for one of the diggers a little, save some cash that way?

You may already have noticed that all example decisions here are about saving money, or about saving time, which is equivalent to saving money. Once again, Skyscraper Simulator boils all interesting choices down to your bank account. And that’s what causes these gameplay elements to lose any and all impact, for two reasons:

One, Skyscraper Simulator is incredibly opaque about the costs that go into building a skyscraper. The machine prices, I can see, fair enough. But what about worker salaries? Does that factor? What about over-time rent? And from the way the largest money deductions tend to happen in the Construction phase, it looks like maybe material costs are a factor as well? I don’t know if any of these suggestions are actually valid, of course; I wish I knew, but I don’t. You don’t even get a good cost breakdown at the end of building a skyscraper. 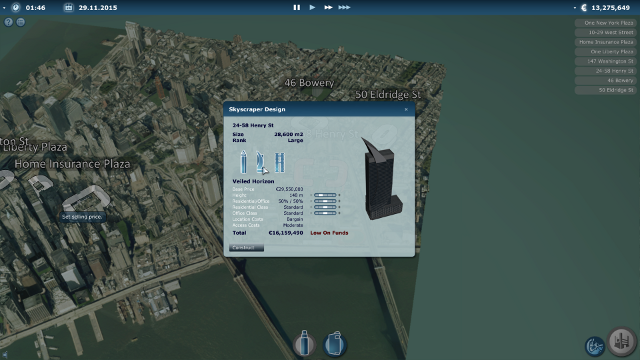 Or at the start, really.

Because of this cost opacity, money-related decisions lose their impact. Who cares if this 4/5 dump truck is more expensive than this 5/4 one? I’ll buy them both! And enough workers to staff them five times over! As long as you have a decent starting bank account, the chance of failure-through-running-out is more or less zero anyway.

And two, counter-intuitively, money isn’t really a factor: once you finish your first skyscraper, and with enough patience, your supply is effectively unlimited. There are no monthly costs to Skyscraper Simulator if you’re not actively building something. So you can just set a skyscraper out to rent, crank up the speed to max, and go… take a nap or something, I don’t know. It’s the old ‘turn off disasters in SimCity and watch your tax money roll in overnight’ trick, except even less interesting. 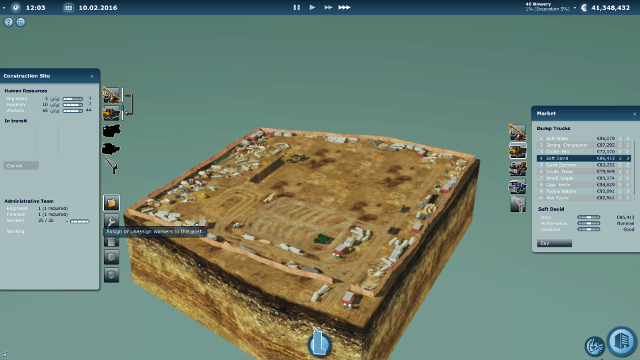 “And that’s the story of how I made forty million euro in New York.”

Skyscraper Simulator is all about money, and any and all gameplay choices you can make are about money. But it’s also incredibly opaque about money, not telling you this and not actually modeling that, until the resulting system bears only a passing resemblance to the real world it purports to simulate.

And if your core gameplay objectives are rendered invalid through your own faulty design choices, what effect does that have on the fun of playing your game? I’ll tell you what effect it has: it turns your game into an unfun, unfulfilling, meaningless merry-go-round slog. 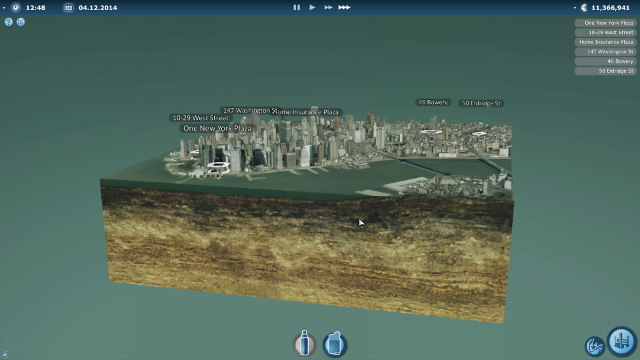 Skyscraper Simulator looks awful, and it sounds awful, too: the shitty generi-rock I heard in the menu permeates the entire game. A good audiovisual aesthetic could have injected at least some entertainment into this otherwise empty game, but the actual result is less like a breath of fresh air and more like a curb stomp.

And that’s not even mentioning the bugs, and the general weirdery. Like, after saving and loading one time, Skyscraper Simulator completely forgot about the profile name it had me fill out at the start. I was ‘Player’ from then onward, forever.

I like being Player, I think. It’s less demanding.

I wish I had something good, anything good, here, to counteract the torrent of bile I’m writing. I guess I kinda like how the relative costs of residential and office districts vary based on their respective quality levels? Christ, that may have been the most boring piece of praise I’ve ever given a game.

No. No, I will not pretend to strive for ‘balance’ for the sake of some artificial sense of fairness. Skyscraper Simulator is junk; there, I said it. It’s unfun, not engaging, boring, ugly, and poorly designed. And I’m done with it, now.

Okay, I’ll be done with it after this final paragraph.

In case you’ve decided to only read the final paragraph of this review, let me reiterate: Skyscraper Simulator is a very, very poor game. It’s not fun to play, it’s not pretty to look at, it’s not even interesting to think about. It’s that rare class of game that’s just bad: not ‘so bad it’s good’, or even ‘so bad that playing it can provide some twisted form of entertainment for you or others’, just bad. I can’t recommend staying away from it enough. It’s nine euro on Steam, so if you’re really dead-set on not taking my professional advice, be warned that you could buy several dozen indie bundle games for that same money. Or, like, three hamburgers. And a milkshake. Are you really willing to make that sacrifice?

Jarenth is uninstalling Skyscraper Simulator as we speak. To suggest some better, palate-cleansing games, follow him on Twitter or hang out with him on Steam.