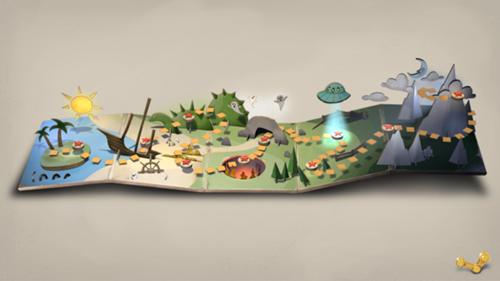 The Steam Summer Sale has existed for years, but it used to just be a time for big sales on lots of games. This year they’ve called it the Summer Adventure, and Valve has decided to show their hand and reveal the master plan.

With the sale comes a set of ten special trading cards, which you only unlock by crafting badges from other trading cards or by buying games on sale. If you get all ten of the summer cards and craft that badge, you get a random item from a random Steam game. (TF2, Dota 2, Spiral Knights, Warframe, you name it.) Protip: the item is never worth as much as the ten cards cost. Oh, and you get ten points toward this big contest where everyone gets divided randomly into teams and 30 people from the team with the most points each day gets 3 games from their wishlist. (Pretty sure that has about as much chance of happening to you as winning the lottery.)

If this all sounds confusing to you, that’s because it is! What started as a trading system for TF2 weapons and hats has become a massive front for churning money, as the article I linked to on page 1 facetiously pointed out. It honestly makes me wonder how long they’ve had it all planned — did they have this sort of thing in mind when they started adding items to TF2 in the first place?!

I’m not bothered by the article because I’m some Valve fanboy who thinks the company exudes benevolence and sunshine all day. This whole badge system that the Summer sale is now based on is pretty clearly money-grubbing. It’s there to encourage us to buy these games, get the cards, buy more cards, and craft badges so we can maybe get more games.

I’m bothered by the article because its whole point seems to hinge on the idea that buying these virtual trinkets is a waste of money. I’ve seen this mentality for years. People sneered at me for buying items for my Xbox Live avatar, or for using real money to get expensive items for my Gaia Online avatar. (Yeah, I used to use Gaia Online. I admit it.) The idea is that if all you’re changing is visuals in virtual content, it’s pointless because it’s “not real.”

The idea that it’s pointless does have some merit, but I’d like to point out that a lot of the people making this claim don’t seem to have the same attitude toward physical products that serve no practical benefit. I’m gonna be straight here — the only difference between buying the Mark of the Ninja steam badge and buying the Mark of the Ninja vinyl figure is that the latter costs a hell of a lot more. (Please someone give me $50 so I can buy one!) Neither of them provide any practical benefit. They don’t provide gameplay either! They’re just neat things to look at and display somewhere. Yet nerds seem to think the latter is less of a waste of money.

I bought the Monaco badge. In fact, I crafted it five times to upgrade it to its max level. And you know what? I only slightly regret it. It means I have an awesome badge of The Redhead on the top-right corner of my Steam profile. Look at that! It’s one of my favorite characters from one of my favorite games. Awesome. And I’m pretty sure it cost me no less than $5 to do it. I’ve made more than that selling the trading cards I didn’t want anyway.

It might sound like I’m rationalizing here, and maybe I am. I’ll be the first to admit I’m not great with money. But it really bothers me that people think virtual cosmetic content is so worthless and physical knickknacks aren’t. That strikes me as old-world thinking. It’s the same line of thought that makes people say that Youtube show producers aren’t running real shows, or that your online friends aren’t real friends.