I’ve had Teleglitch sitting on my desktop for a little while now, ever since I bought it in May of this year. I’ve been intending to review it for that long, but… I don’t know. Something kept me from launching it for the first time, all this while. Was it… was it fear? It couldn’t have been fear, could it? Do you think it was fear?

Man, I’ll tell you what was fear, though: Teleglitch launching. There’s nothing quite like a BSoD-coloured loading screen showing lists of file names to really put the stress on a man whose computer has been crashing randomly for the past few weeks. 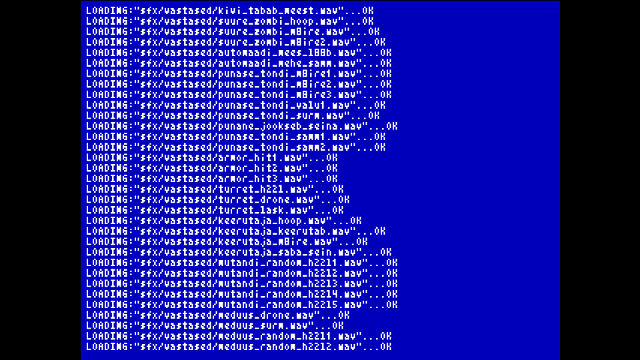 “People will think this is fun!” — a person I would probably not get along with.

Getting past that, Teleglitch’s backstory is self-contained on one handy-dandy information slide. To wit: we’re on the planet Medusa-1C, in a MILITECH Corporation Military Research & Training facility, and shit appears to have gone fucked up. Rogue AIs, teleportation experiments, zombies and robots and all kinds of mutants. Sounds like a swell place. 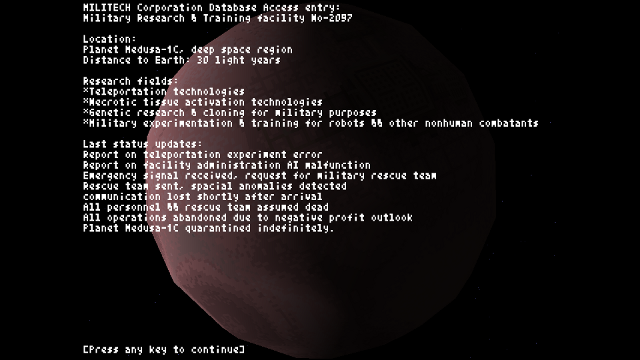 “Come to scenic Medusa-1C! Come because it’s your job to work here, stay because everyone is dead!”

Teleglitch’s main menu is basic white text on a black background, and therefore not really worth a screenshot. Its options are similarly sparse: one sound slider, three windowed-mode resolution settings and a full-screen, and a few graphical options that I have no idea about yet. 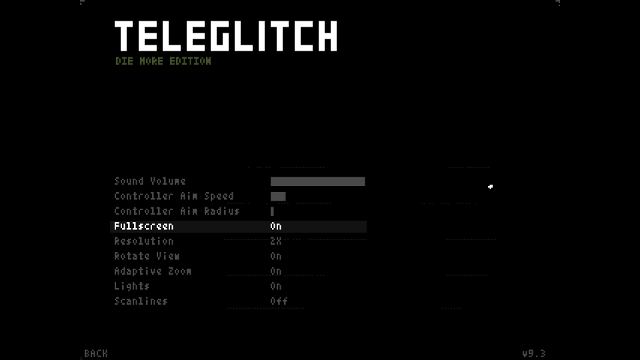 It’s not a tweaker’s paradise, is what I’m saying.

Speaking of the Info menu: I have no idea what the deal is with this menu. Nominally, it offers submenus for ‘items’, ‘monsters’ and ‘story’. In practice, though… 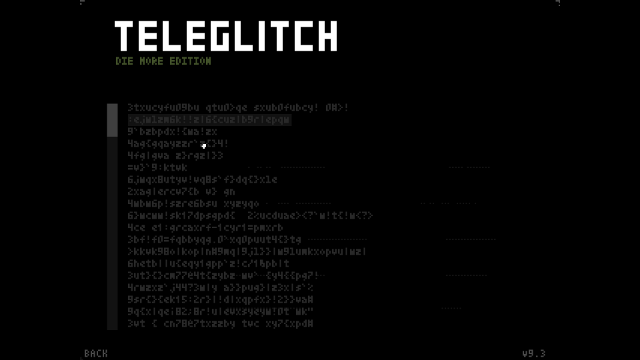 What the Options menu lacks in activity, the New Game menu more than makes up for. Seriously, I don’t think I’ve ever seen a game with this many ways to start over. Were I a more cynical person, I’d almost say it’s intended to be prophetic. 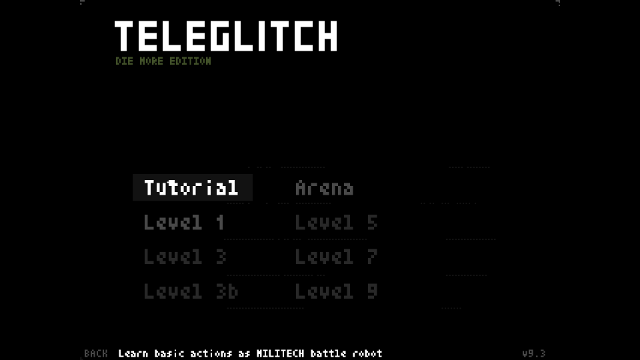 I’ll get to all of that later, though. For now, it’s tutori-time!

“WELCOME TO MILITECH CORPORATION TRAINING COURSE FOR ROBOTS. THIS IS FACILITY AI SPEAKING. LET’S GET READY TO RUMBLE.” 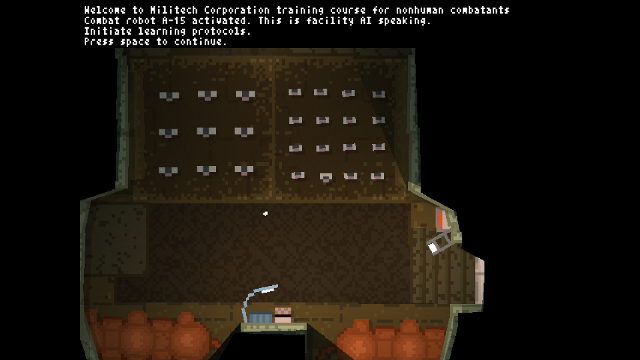 As the tutori-text drones on, I take a moment to really soak up my first look at Teleglitch’s visual style. Yeah, I… I think I can already see why people praise the oppressive atmosphere so quickly. It’s the black, isn’t it? There’s… I only just started, and there’s already so much of it. And it’s so absolute: not a shade of grey, not any hint of colour, just pure black darkness. The small area of colour and activity in the center of the screen quickly takes on the appearance of an island of reality in an ocean of nothing. And it hasn’t even been ten seconds.

“PRESS WASD TO MOVE.” Oh, shit, I was paying attention! I press W, and one of the pink-light pink-and-black rectangles I assumed were future sushi rolls lurches into action! 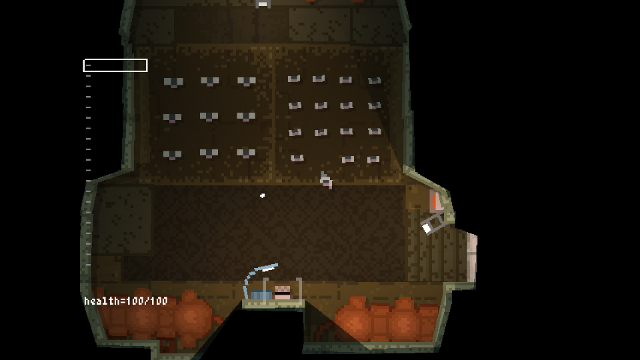 Seriously, though, they look delicious.

WASD moves, in an absolute direction system. So none of that ‘turning like a tank’ nonsense. Moving the mouse doesn’t initially seem to do much except move a small pointer across the screen, something I’m sure will come up later.

A weird pink-coloured box has obvious grey brackets around it. So, as you do, I move there and hit the Space key, which the game seemed to indicate as the action key du jour. This brings forth some tutorial exposition, and unlocks the door to the right. I move thereabouts, hoping that actual adventure will literally be just around the corner.

As I move, the darkness does too. This doesn’t capture well on the screenshot, but the black space just beyond the walls isn’t a static entity. Rather, it moves with me, shifting as I go, casting stark lines of sight and darkness that emphasize what I don’t know more than what I do. 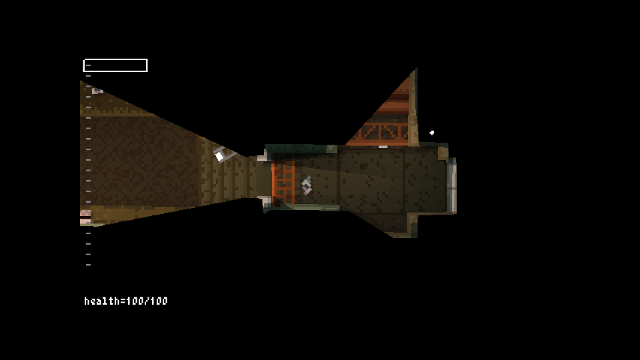 There’s a lot I don’t know right about now.

The second room holds a bracketed crate, holding guns both shot and machine. Sweet! The guns each occupy a spot on the weird list of dashes on the left of the screen, which I now understand to be my inventory. Mouse wheel cycles through the (actual items on the) list, ‘selecting’ one of them at a time. By holding e, I can actually move items up and down, too.

With a gun of any kind selected, the previously silly mouse pointer actually becomes relevant. Holding right mouse draws the gun, literally drawing a line between my current position and the mouse cursor. Left mouse button with a drawn gun fires it, obviously.

Gun fire is… interesting, graphically, in this game.

Do bullets usually curve through the spectrum of visible light?

I run a brief gun training exercise before moving on to the next room, which holds bombs. Bombs can be placed or aimed and thrown using the same gun controls, and they explode in a very satisfying and loud way. They take out enemies and shoddy walls.

Bombs also serve as an introduction to item combining. By pressing C, at any time, I can see which items in my inventory can be combined into other items. Right now all I have are bombs, which I can tape together to form stronger bombs — that’s how explosions work, right? — but we’ll see just how deep this rabbit hole goes. 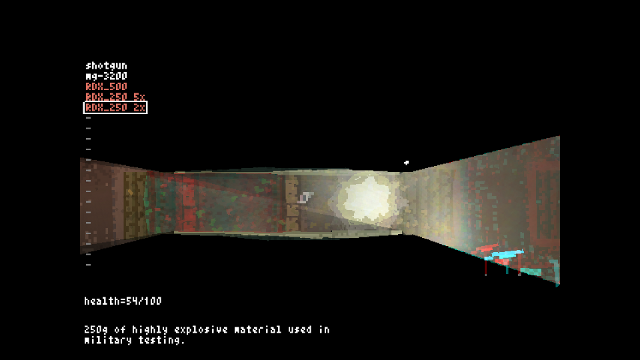 But seriously, though: explosions.

I learn a few more things about maps and knives, and then the tutorial ends.

I decide to do the obvious thing, and start Teleglitch on Level 1. With a mind fresh full of military robot advanced tactics, I’m sure I’m more than well-equipped to handle whatever Actual Teleglitch will throw at me. 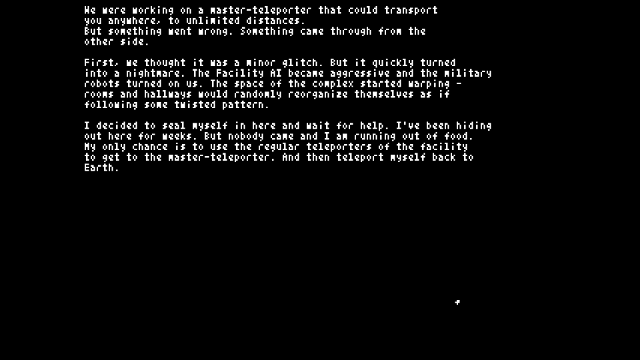 A starving scientist slash engineer doesn’t sound as battle-hardened as a military robot, but hey. I’ll give it a shot.

I start my Teleglitch experience in a small, cramped storage room, filled with empty cans. My only possessions are a 9 mm. pistol with four clips, four RDX_250 class bombs, and the aforementioned four empty cans. Yeah, I’m bringing the empty cans. Who knows what those could be good for? 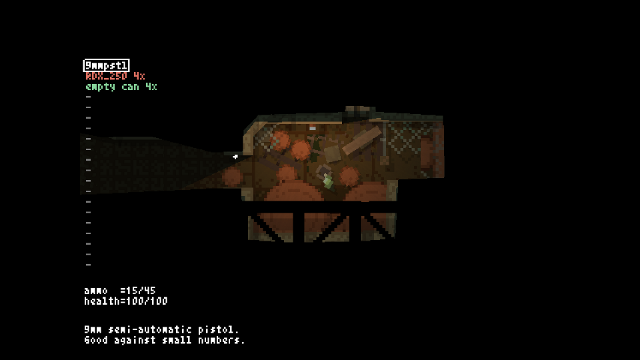 Throw them at enemies, in a pinch.

I run outside, into the seemingly endless hallways. As I walk through the angled hallways, the screen actually rotates with me, seemingly intent on always having me be the immutable center of the room. The effect is a little unnerving, though, and it makes it hard to keep track of where exactly I’m going.

Everything seems abandoned at first, but when the hallway opens up into a garden of some sort, I’m quickly attacked by… something! Monsters, mutants, I don’t know. They don’t look human. Luckily, they quickly drop to two bullets from my pistol and/or knife stabs each. Aiming takes a little getting used to, because I think the bullets actually fly a little off from the aiming stripe? But I manage to get away from the monsters without too many losses. Jarenth 1, Teleglitch 0. 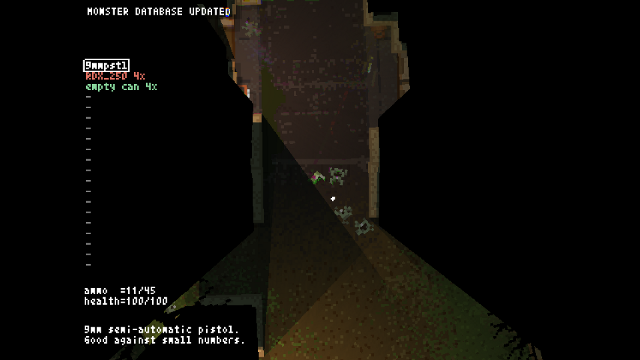 Now, and forever, I am *unstoppable*!

In the hallway beyond, I notice something peculiar: where normally the darkness of the unknown shifts away to reveal what I see, there’s a pulsating edge of darkness here that seems content to stay where it is. Also, it’s making unsettling noises, and the edge flickers in various hard-to-see colours every now and again.

I run into the static darkness. This kills me. 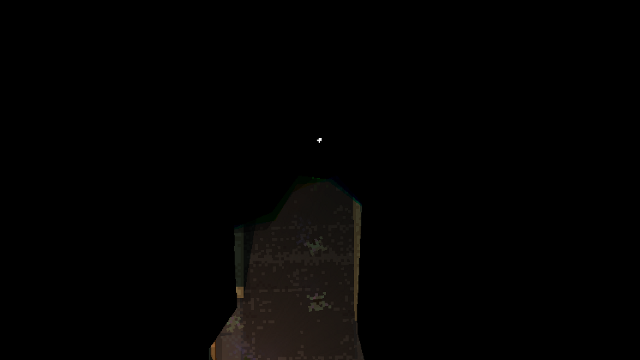 I am now dead.

Teleglitch mocks me for this. 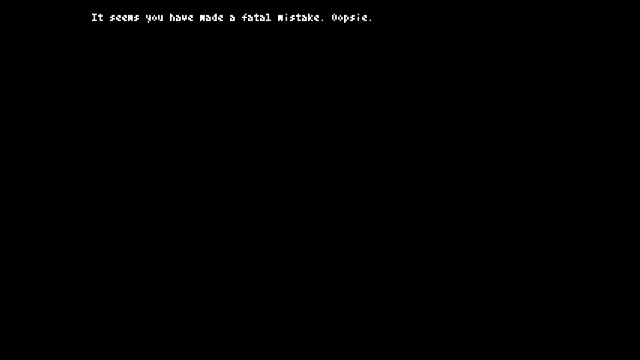 Yeah, I guess I did.

Alright, I’ll admit that was kind of ill-advised. Jarenth 1, Teleglitch 1, I suppose. But then again, they didn’t exactly cover murderous darkness in robot academy!

I’ll consider this a Lesson Learned: stay away from the noise static death-black. With this new knowledge in mind, I think I’m going to dive back into Teleglitch now, see if I can’t do a little better. See you on the next page, which I’m sure will detail my successful adventures in great detail!