Regular readers may remember that in January of this year, I reviewed a game called GhostControl Inc. on the now-rapidly-approaching-defunct Blue Screen of Awesome. If you haven’t read that review yet: go now, quickly! Read it while the site is up! While it’s still up!

If you can’t, or won’t, read that review, here’s my summary: I thought GhostControl Inc. was a game with an interesting central idea and a neat Ghostbusters meets XCOM gameplay hook, let down by lackluster implementation and gameplay that wasn’t nearly as fun as it could have been. I particularly lamented elements like a lack of gameplay information, an unclear progression structure, and a gameplay flow that never really felt like it was going anywhere.

One of GhostControl Inc.’s developers, Volker Ritzhaupt, actually commented on that article, letting me know that the team agreed with many of my criticisms, and that quite a few of them were actually slated to be solved in the near future. And a few days ago, undoubtedly triggered by the recent Steam release of GhostControl Inc., that same Volker Ritzhaupt emailed me again — yes, actually emailed me, individually. I know! — suggesting that now-of-all-times might be an excellent time to take another look at GhostControl Inc.. And write some more about it, maybe?

I liked what GhostControl Inc. tried to be, and I’m a sucker for a dev team that actually goes out of their way to talk to enthusiasts. So I figured, why not?

Two things rapidly became clear to me: a) it’s true that GhostControl Inc. has seen a few significant improvements, but b) it’s still basically the same game under the polish. As such, I felt it would be dishonest and overkill to write another ‘full’ review on it. So instead, what I’m presenting you with today is a brief second look at GhostControl Inc., focusing on its improvements since launch and the problems I perceive it has now fixed. And maybe, if I run into any, the problems I perceive as still being there.

One of my strongest complaints about GhostControl Inc. was its general information obtuseness. GhostControl Inc. never actually told you as much as it seemed to think it was telling you. Between weapon traits, ghost special abilities, and character stats, it was very easy to get more than just a little lost.

Updated GhostControl Inc. is quite a bit better in this regard. Particularly the addition of the much-vaunted Spookipedia, which serves as a convenient collection point for team details, equipment and ghost information, and achievements, is helpful in figuring out just what shit does.

You want to figure out just what the ‘Pull’ stat on a weapon does? Gotcha covered. 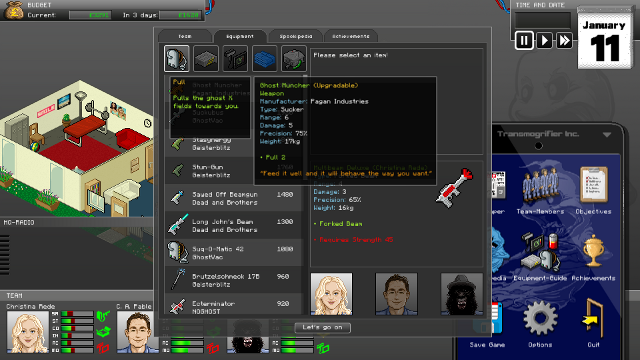 I mean, sure, that one was pretty self-explanatory. Listen: it’s the thought that counts.

Not every trait is explained equally well, but hey. 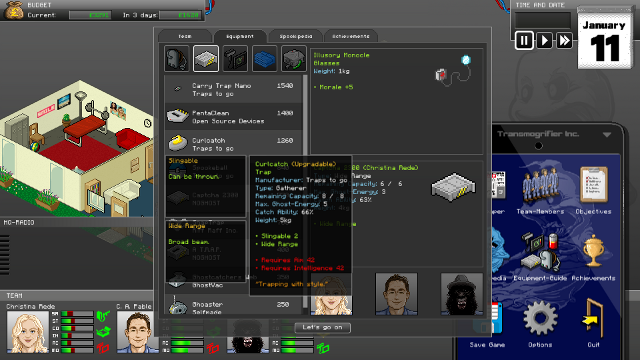 These weapon trait popups actually show up everywhere, now, not just in the Spookipedia. It’s a neat little addition to have.

The Spookipedia’s main function, of course, is to give you some more background information on the damn ghosts you fight. Because Steve (the Ghost Master) knows that was needed. 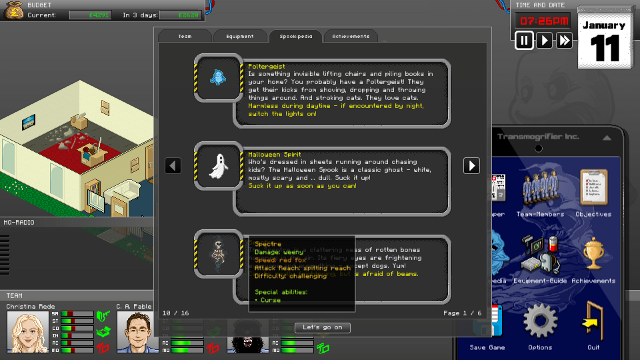 Finally, some *actual background* on my ghosts!

The lore information presented in the Spookipedia is fairly neat, and occasionally useful: I had no idea Pesters would split into parts, for instance, or that Poltergeists were harmless in light. Sadly, the weapon-trait-popup trick isn’t repeated here: Ghost special abilities are still as much a mystery as ever. I tried looking it up in the Spookipedia, I can now say, and I still don’t know what Curse does!

…Or rather, I would say that. But aside from the Spookipedia, GhostControl Inc. now also has an online manual available for perusal. And guess what? While the information within isn’t organized super clearly, it does tell you what Curse does!

And not only that: I even managed to piece together what most of the hunter stats do. Morale, for instance: turns out that when your Sanity-hit points get low, your Morale is actually the thing that checks for panicking. Sounds like it makes a lot of sense, so I’m glad it’s actually made explicit somewhere now.

Gameplay-wise, GhostControl Inc. has a few interesting updates. A difficulty level selector, for one. 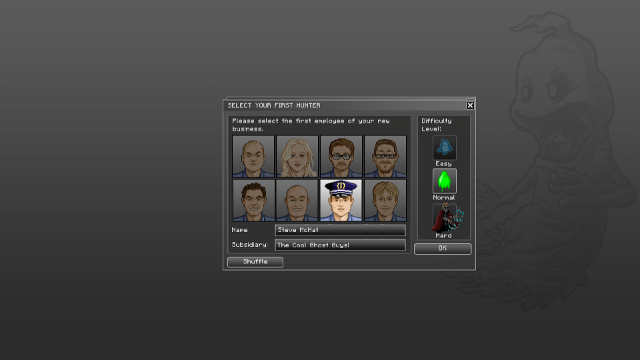 And dudes with hats at the start.

Given enough money, your HQ can now be upgraded with a training room and a research lab. The training room is straightforward enough: take a hunter, pick a stat, devote money and time, and presto! Stat better. I don’t really understand yet how the stars play into it: can I only level any given stat so much, or do the stars simply represent training intensity. But hey, it works, and it’s much clearer than the random in-combat stat-ups. That are actually still there. 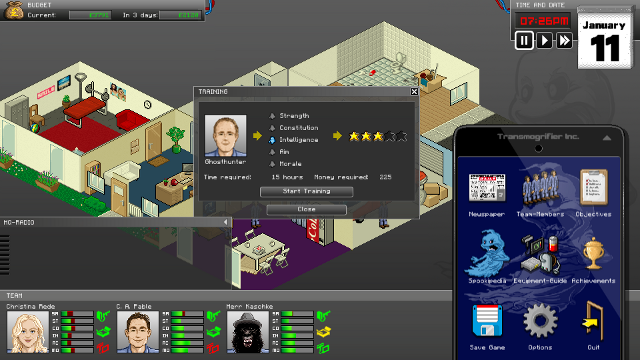 Between the two mechanics, I’m not entirely sure which one I understand worse.

The research lab is more interesting: after construction, a Researcher-type hunter can upgrade certain items in one of two ways. Many items can be upgraded, usually either improving their core stats or adding new abilities. 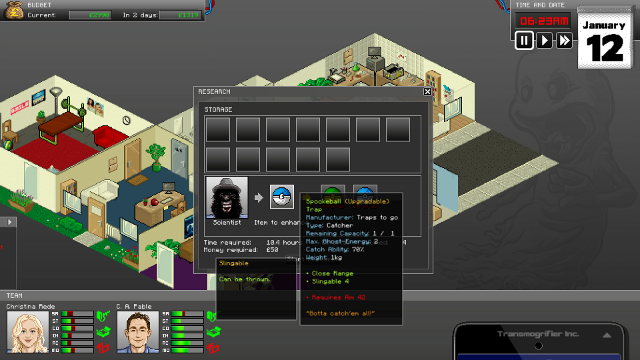 Yeah, we’ve done this joke before.

…either improves its catching capacity… 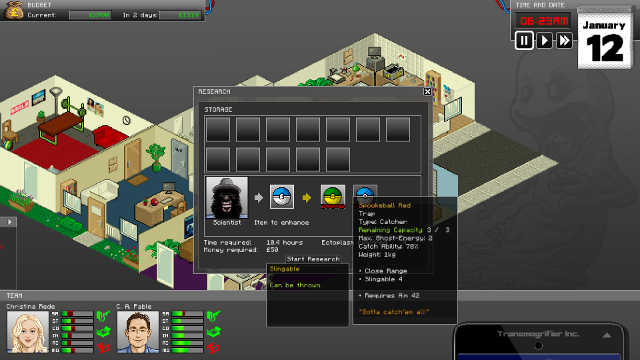 …or its catching power. 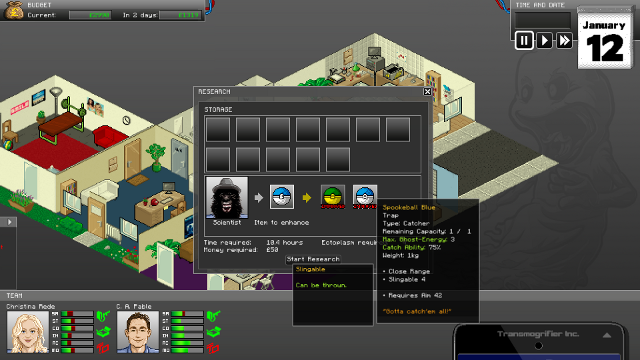 Sadly, you can’t re-upgrade this item into a Master Spookeball.

It’s a simple upgrade system, fair enough, but it adds a touch of the gameplay longevity and understandable complexity that GhostControl Inc. so sorely needs. It also makes the ectoplasm resource matter just that little bit more… though not that much, given that I never had the idea that I was running out at any speed.

Not all gameplay system upgrades are technically good, mind: while the new ‘vitruvian man’ equipment dolls certainly look nicer, it seems to literally have no effect on the actual gameplay. 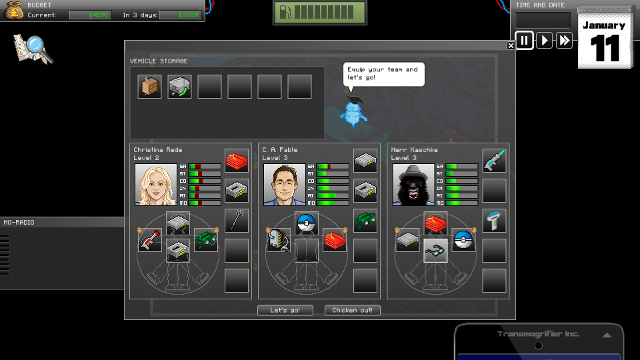 “Rede, you’re holding your goggles in your hand? Good. Pable, you got your suit grabbed tight? Nice. And Kaschke… you taped your glasses to your gut, and you’re wearing your suit like a headband? *Impressive*.”

And while the improved information flow is nice, I still routinely find myself not understanding stuff. Like, for instance: why is my lead ghost hunter showing red signs in all her stats, here? I’ve taken her to the hospital! Twice! 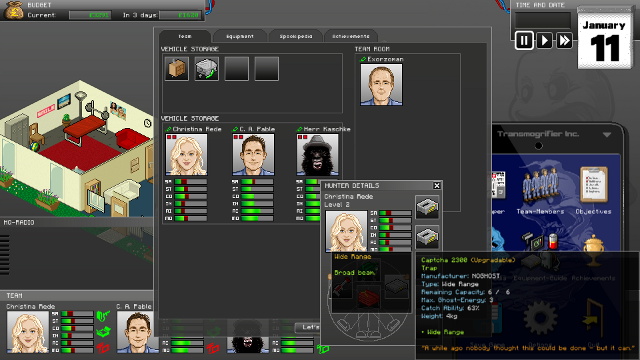 I used the image that shows her portrait and stat three times, so you’d definitely see the magnitude of it.

In the end, GhostControl Inc. is still… is still GhostControl Inc., really. It’s still a game that aims for the stars, but runs into trees all the time because it’s not looking at where it’s going. It presents an experience no other game can present, but it’s not entirely well-enough put together to actually convey that experience.

But there’s no denying that GhostControl Inc. version now is an almost objectively better game than GhostControl. Inc version past. Developers Bumblebee Games told me they would keep working on improving their opus, and I respect any company that keeps their word this way. And I’m fairly certain they’re not done working, yes.

If you were interesting in GhostControl Inc. before, the recent Steam release means now’s really as good as time as any to pick it up. It’s quite fun, it’s not expensive, and if the past is any indication of the future, it’s only going to get better from here.