Supergiant Games‘ newest jeu vidéo, Transistor, serves as an excellent case study into the way I consume and make uses of game news. Because… I really don’t? Beyond the occasional exposure on Twitter, in digital storefronts, and through my various social networks, I hardly ever read game news of any kind anymore. Not even about games I like! Especially about games I like, really: for games I am — intuitively or through initial exposure — really looking forward to, I’ll often move from passive disinterest to active news avoidance. So as to better keep up my ‘first contact’ style of columning, and also because I really value an untarnished first look. And yes, I’m well aware that that kind of makes my own writing super hypocritical.

I’m giving you this peek behind the curtain so you fully understand how totally blindsided I was by Transistor. I knew it was coming, on a certain level, but… suddenly it was just there. Taunting me on its Steam store page. And beyond the well-worn visual of the red-haired woman and her weird green sword, I knew nothing about it.

Obviously, this could not do.

Transistor pans down on a static, gorgeously-drawn shot of the aforementioned red-haired, yellow-dressed woman. With her are the equally aforementioned green sword, its red center jewel eerily like an eye, and a nameless, motionless man. The man is motionless primarily because he’s impaled by the sword. 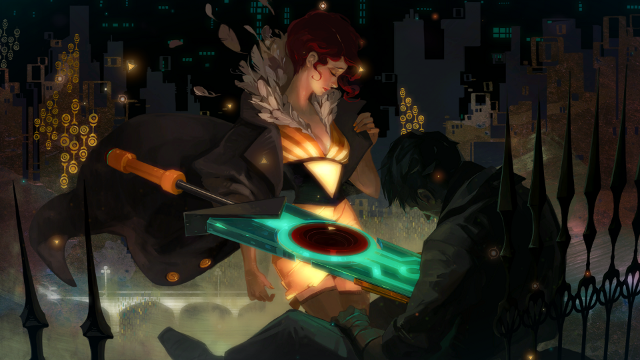 That tends to slow people down, you see.

The sword flashes bright green-blue in a staccato rhythm. As it does, I hear a male voice speak. The effect, the overlap of flashes and words, is such that the sword appears to be the speaking agent. Intentionally, no doubt. It’s probably correct.

“Hey Red. We’re not going to get away with this, are we…”

The screen pans up, impossibly so, to reveal an isometric top-down view of Red, the guy and the sword.

Under admonishment from the sword-voice, and by the power of me clicking once, Red pulls the sword free from the stone-cold dead man. 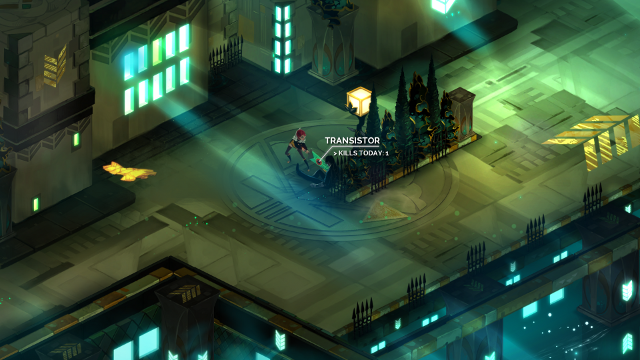 A UI flashes into view. Wait, hold on a moment. Did we start already? No, that’s not the deal we have: I get to whine about menus and settings first. 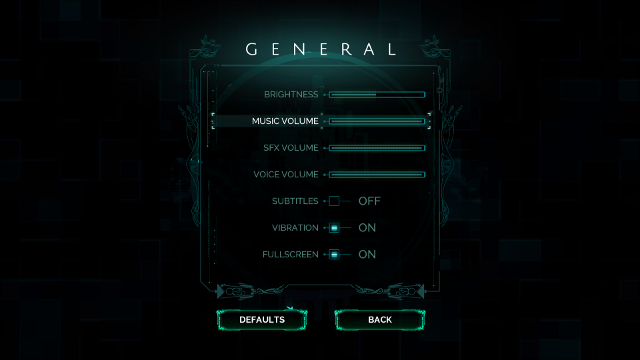 Transistor’s settings are… basic, I guess. There’s not really a whole lot to say about them, except that I would have liked to see a little more depth here. But given that it’s launching on PS4 simultaneously…

Transistor’s control options are slightly more in line with what I’d expect from a PC game. Also, the fact that there is a dedicated button for humming amuses me. 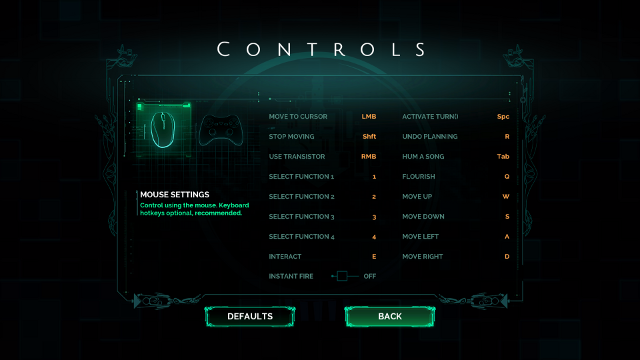 As if I need a *button* to hum all the time.

Alright, we got that out of the way. Back to the game itself!

Initial impressions, for whatever good that distinction has done this review 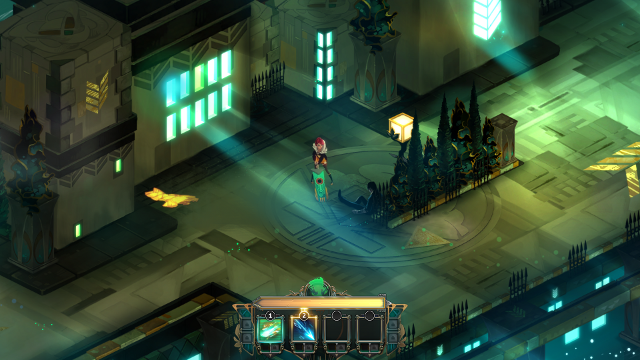 When we left off…

As Talking Sword — the Transistor, I should probably say — babbles on a bit, I start trying out basic controls. Left mouse moves Red around, a careful run, dragging the Transistor behind her. Click and drag. As I run to the yellow spot on the ground, more of that white-line information I saw earlier shows up. E, it seems, is for interacting with environmental objects, prompting the Transistor to say this or that. 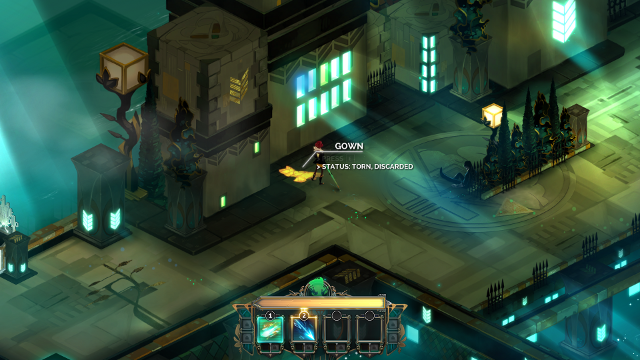 “What a night. You’re still in one piece, that’s all that matters.”

Right mouse button, on the other hand, turns Red all fightin’ active: she slams the Transistor into the ground, and a burst of yellow-blue energy shoots out of it a short distance. Not what I would have expected from a sword, but then again… the Transistor hardly seems like a regular sword.

It takes me a few swings to connect the Right Mouse blast attack to the number-based UI on the bottom. It seems the Transistor currently has two skills: the short-ranged yellow blast attack called Crash(), and a longer-ranged blue arrow called Breach(). I can trigger either of them by pressing the number keys, or I can press the right mouse button to trigger the currently ‘active’ one — which is switched by way of mouse wheel. 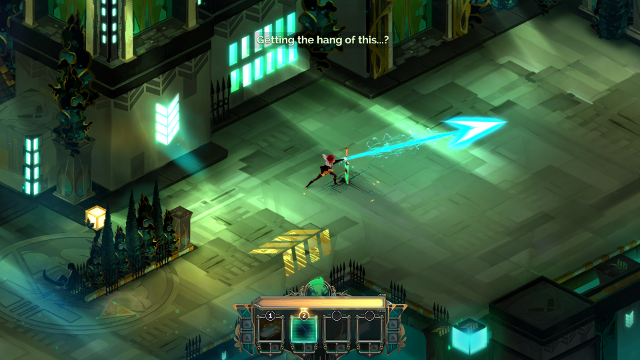 And yes, those parentheses are part of the attack names. Crash() and Breach(), not Crash and Breach. Are these… programming functions? Is that the metaphor we’re going for, here?

I walk ahead, in the one direction that isn’t a dead end. I soon run into a few odd white-ish pillars of varying sizes. One of them is glowing more brightly than the rest. It’s called ‘Process’, apparently. 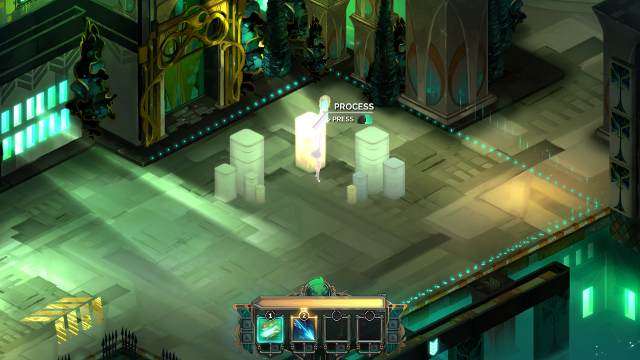 And I’m to interact with it, equally apparently.

I smash the pillar by way of Crash(), and out comes… I don’t know how to describe it. A Cylon-like orb head, suspended over three angular legs, with a fourth leg acting as a hat of sorts. It’s called ‘Process’, too.

The ‘process’ creature wastes no time in attempting to attack me. I say ‘attempt’, because fighting back with Crash() seems to stun it for a few seconds. More than enough for me to get another Crash() in, which…

Wait a second. I’m… I’m crashing a process? So we are going for a programming metaphor. 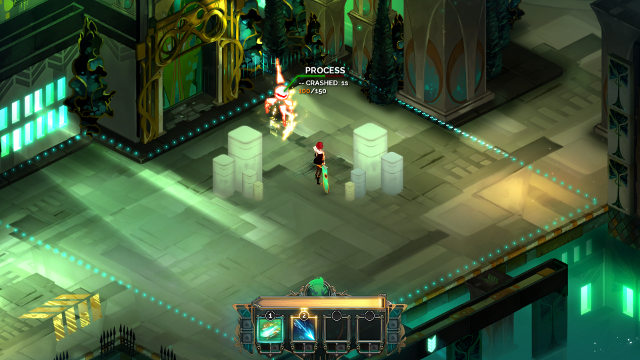 Maybe my next enemy will be called ArrayIndexOutOfBoundsException().

Anyway, I lay the smack down on this weird tripod thing. It gets a few shots off with its beam-firing laser leg, but it’s nothing that impacts the bar-I-assume-is-my-health-bar right above my attacks.

Defeated, the weird Process creature turns into an equally weird white-and-red thing that’s also called ‘Process’. ‘Come closer’, the info-line suggests, so I do… and the final Process form is absorbed into me, never to be seen again. I’m strangely okay with this.

More of the white Process pillars pop up, barring my way. Good thing I have an attack that is literally called Breach() handy, right here. 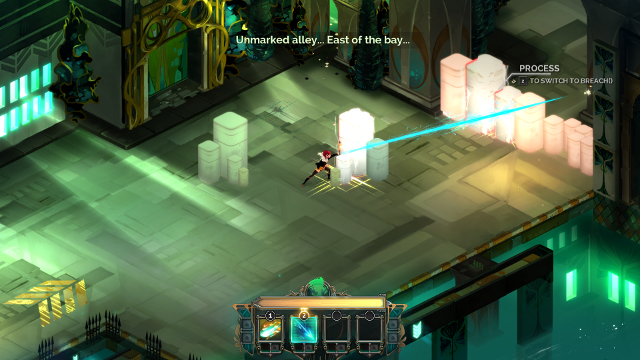 Something, something, breaching the process.

Further ahead, I find an exit. Break point. It’s locked, however, and interacting with it causes more of the Process pillars and creatures to spawn out of nowhere. The Transistor calls them ‘Creeps’, which sounds fitting.

Rather than fighting all three of these Creeps on equal ground, Transistor — that is, the game Transistor, not the in-game sword-like item called the Transistor — suggests that I press the Spacebar once. Doing so causes me to take my turn in combat. 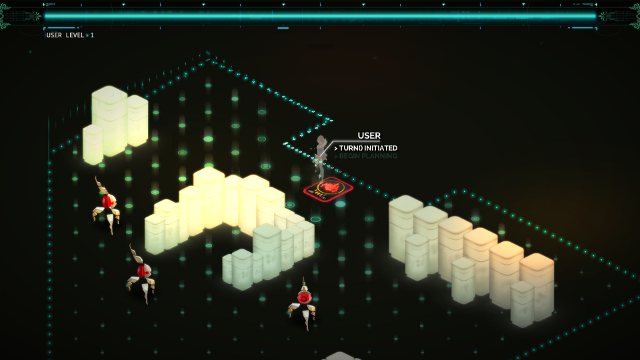 Pressing Spacebar enters Turn()-mode. In this mode, I can plan a limited set of actions: moving around and attacking, mostly. Planning attacks is actually quite involved: I can aim each attack with pin-point accuracy, immediately seeing which targets I hit and how much damage they take. The number of actions I can take is limited by my planning bar on the top of the screen, filling up at different rates when I plan different skills. 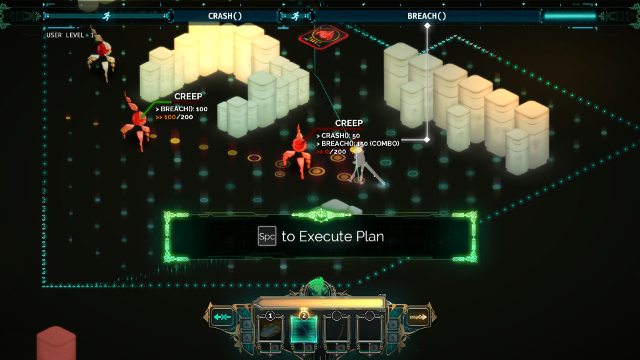 Different skills take up different lengths of bar. I assume this has to do with how *rad* the skills are.

And when I press Spacebar again… Red flies across the screen, executing my plan in less than the time it takes the Creeps to turn their heads and keep up with me. Time is not frozen, I can see that from their slow movement, but in some ways it might as well be. 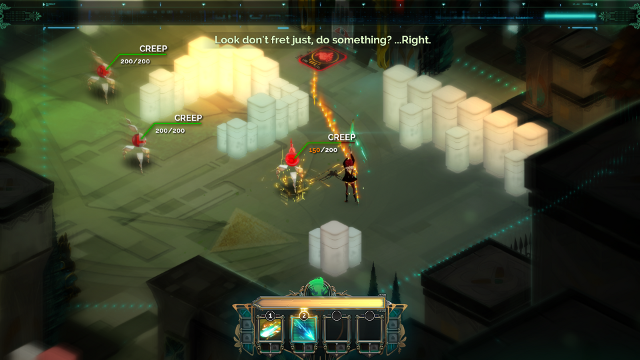 My own speed, meanwhile, is such that it causes *the ground to catch fire* as I run.

Using my new-found powers of being pretty fast, yo, I beat back the Process Creeps and unlock the break point door. I also receive experience: measured not in points, interesting enough, but in percentages. 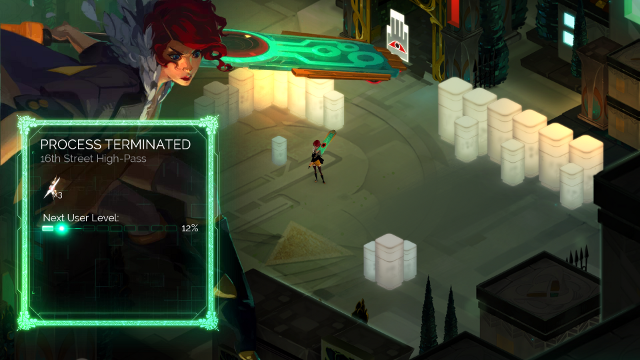 I move through the point, past a gorgeous walkway… 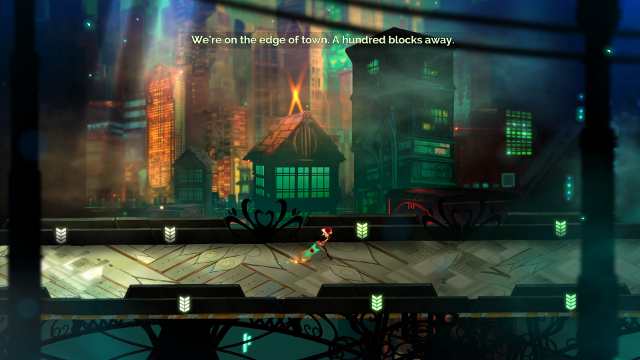 Presented here as evidence for my assertion.

…and into another part of town. 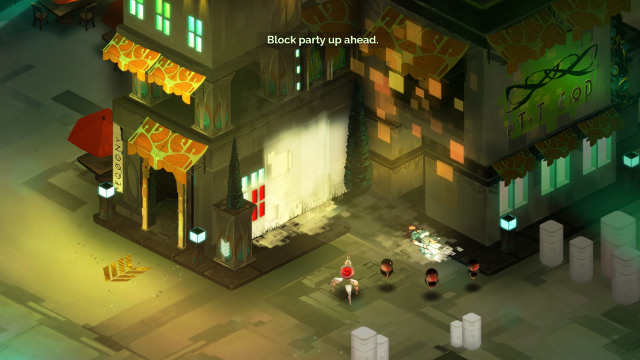 It’s not a good part of town.

After beating back the Creeps and the unnamed other-Processes, the Transistor… talks, I guess? To a glowing hypercube rising out of the dead woman lying there. 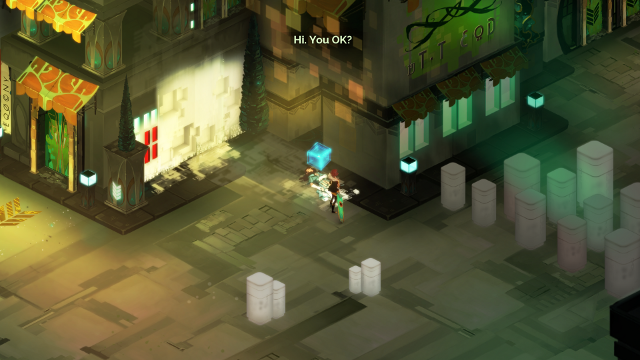 Listen, I can’t make this any less weird than it is.

After a brief chat, and the phrase “We can use her”, the Transistor absorbs the hypercube into itself. It… it’s stealing that woman’s digi-soul, okay? That’s just what’s happening here. Anyway, stealing this woman’s soul — her name’s Lillian — grants me access to a new power: Spark(), a fast-firing area-explosion. 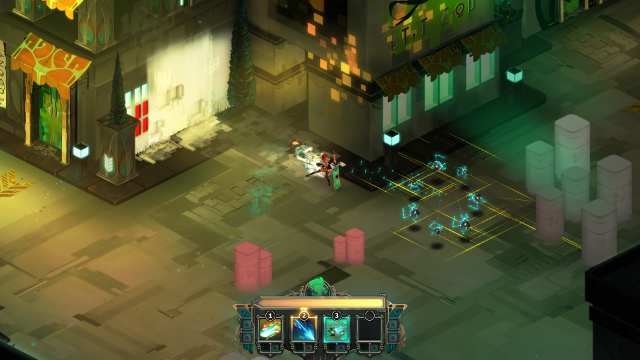 YOUR SOUL HAS BEEN JUDGED, AND FOUND… RAD.

I move further down this weird city, which evidence suggests is called ‘Cloudbank’. I vote on which kind of weather I would like, which… seems excessively hopeful to me? I fight some more Process, look at a poster of myself, and steal another man’s soul. This one gives me the power to Jaunt() from place to place, which seems nice.

Finally, I use my new-found powers to fight a big Process dude. 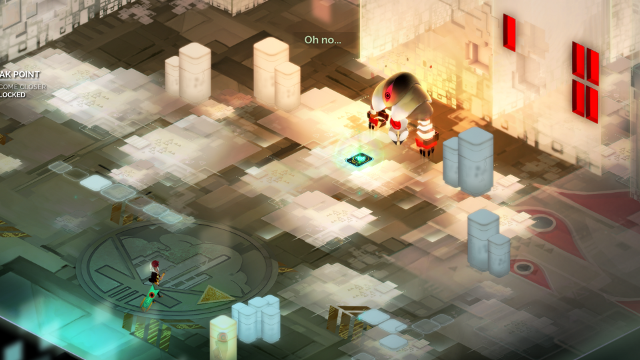 It’s called a Jerk, and that’s not even a joke.

Defeating Big McHugeGuy and his single-Creep entourage causes me to level up! Reaching level 2 has two important benefits. Firstly, it provides me with a new Function, which is — unsurprisingly — what attacks in this game are called. I get to choose one of two: either Bounce(), which attacks multiple targets, or Mask(), which allows me to hide. 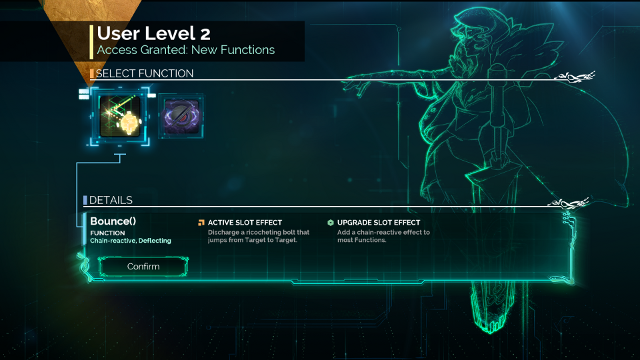 Finally, a way of gaining power that *doesn’t* involve soul-stealing!

But secondly, and probably more importantly, reaching level 2 unlocks the Setup Utility, and a whole can of customization options with it.

I have five powers now. I have four power slots. What’s a poor techno-sword-wielding red-haired girl to do? The answer is simple: use the fifth power as an upgrade of sorts for any of the previous four. 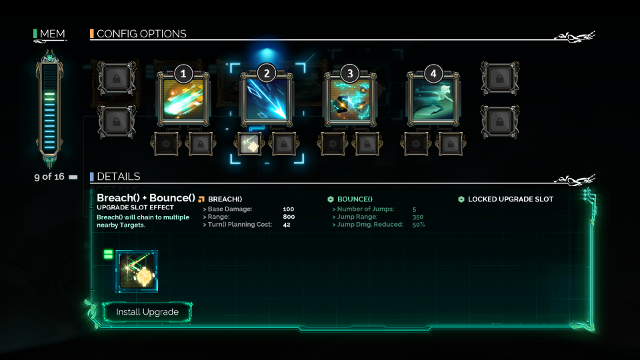 It’s so straightforward, I don’t even understand why I feel like I need to explain this.

It’s a simple system in theory. But in practice… with sixteen different permutations of Functions already at my beck and call, and the promise of more Functions to come… as well the barest hint of a third use of most Functions, and the implication that I’ll unlock double-upgrades before too soon?

Yeah, I think I’m going to have to sit down for a little bit. Be back when I’ve mastered the art of functional programming!