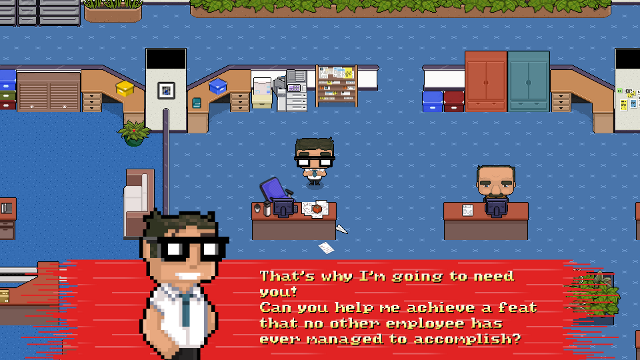 Betcha didn’t expect me to actually do this, did you?

As it turns out, I was approaching the Sleep Zone challenge all wrong. There were two roads through that level, you see, and I… well, I took the one that requires specialist stealth equipment to get through. Advanced specialist stealth equipment. The kind of detection-avoiding masterwork aid that still routinely gives the pros a run for their money, that’s the level of material assistance I’m talking about here. 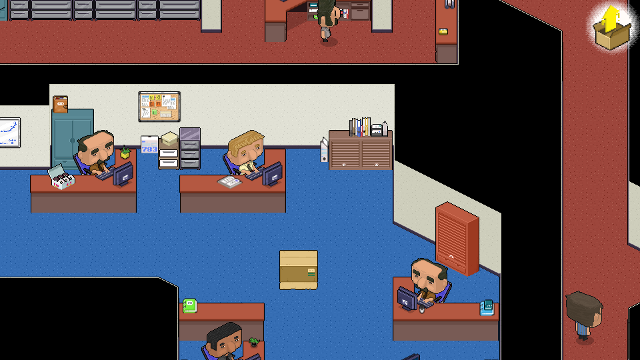 You knew it was going to be this.

Using my new-found powers of processed paper exposure evasion, I made it past level 4, and into the heavily-guarded boss area that is level 5. And when I say ‘heavily-guarded’, I mean ‘guarded by a mall cop on a golf cart’. Which is still pretty high-tier security for an office like this. 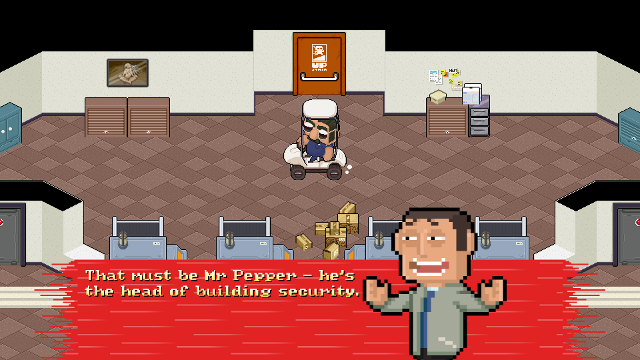 And look at that swank-o cart.

I won’t spoil how I got past Mr. Pepper here, but suffice it to say that the solution involved literally murdering him with explosives. 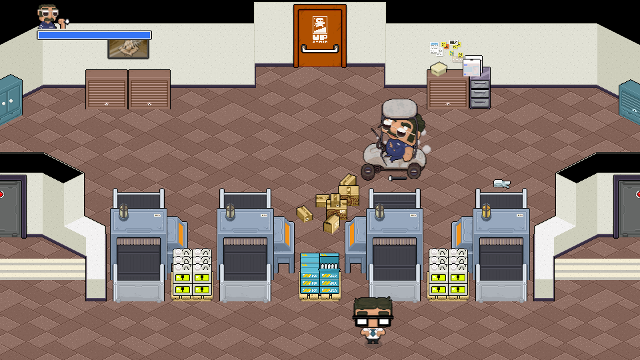 No, but seriously. He’s totally dead. The game literally, explicitly calls this out near the end.

And once I got my first taste of blood, well… you could say that the rest of the office didn’t stand much of a chance against Gary, The Predator.

You could say that, but it’d be totally wrong. In reality, the proceeding 15 levels were in much of the same vein as the previous five, except in new environments and with some new and interesting tricks. 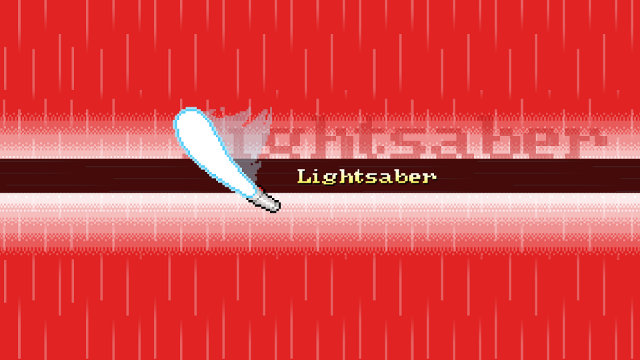 Lightsabers do actually get involved later on, though. 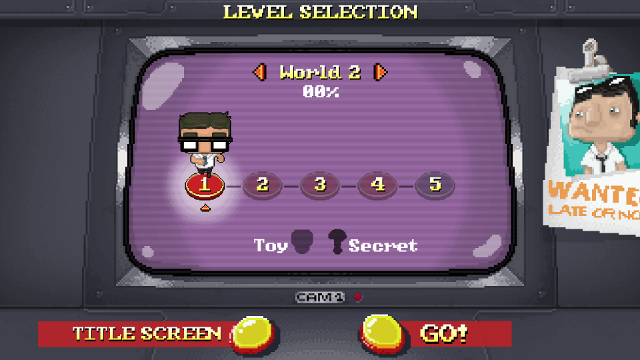 …I made my way to the top, at my desk, and into the hearts of millions. 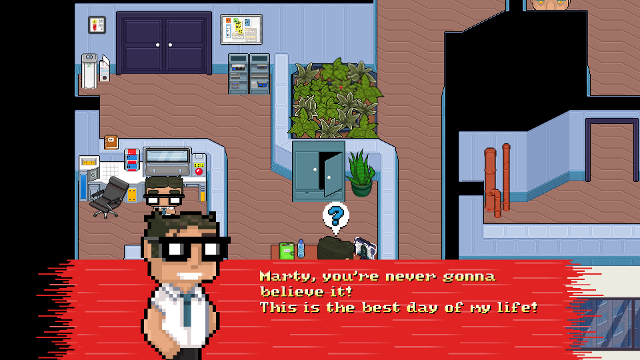 No AKs were involved.

Alright, but for genuinely real: I did actually finish Gary’s Misadventures, start to finish. Its twenty levels, stretched over four ‘worlds’ slash office sections and topped with four increasingly outlandish boss fights, managed to keep my attention and my interest for the few hours I needed to complete it. Gary’s Misadventures is short, to the point, and quite fun: using a few basic mechanics, it manages to spin an interesting set of levels that doesn’t re-thread on existing themes and ideas óvermuch. Some re-threading does happen, fair enough, and Gary’s Misadventures has just slightly more moments of aggravating game-sanity and poorly coded gotchas than any game really needs. But eh, what game doesn’t? Beyond that, the game is simple to control, it looks and sounds neat, the dialogue is rather well-written, and I don’t really have a good way to spin this paragraph into a closing joke.

Gary’s Misadventures is built around the simple gameplay conceit of ‘if you get into peoples’ direct line of sight, and you stay there too long or you get too close, you lose’. It’s a simple mechanic, but clever level design uses it to great effect over Gary’s many floors-to-cross. Some offices are closed, allowing you hide behind walls, while others are open. Some offices are large enough that you can sneak by sight lines, while others are small and filled with alternate paths. Some NPCs stand still, some turn around, and some run predictable routines throughout the day. There’s a lot for Gary to work with here, is what I’m trying to get across.

Granted, the conveyed notion of sleep-deprived office workers only half paying attention is stretched to some limits over the course of play. 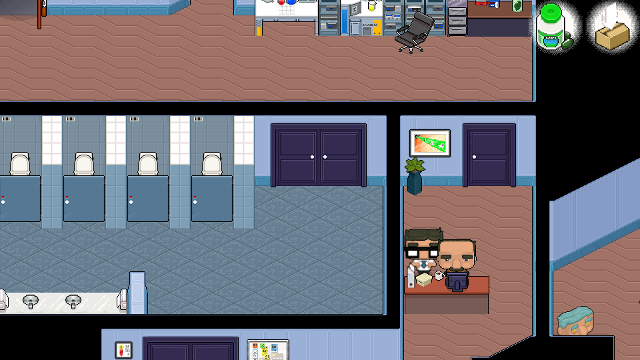 “I’m still not touching you.”

Variations on the basic mechanics arrive soon, of course. Certain open cupboards and car trunks allow Gary to hide inside, trading total and perfect security for some limited situational awareness. Vents provide room for you to safely travel through, either bidirectionally (in case of well-functioning vents) or unidirectionally (in case of vents that snap as you crawl through, somehow not making any noise while doing so). And Gary can find a small selection of items scattered throughout the various levels: a newspaper to hide behind, a box to hide under, a rubber band and eraser to distract co-workers… a donut to lure security guards, laxatives to taint that donut with… 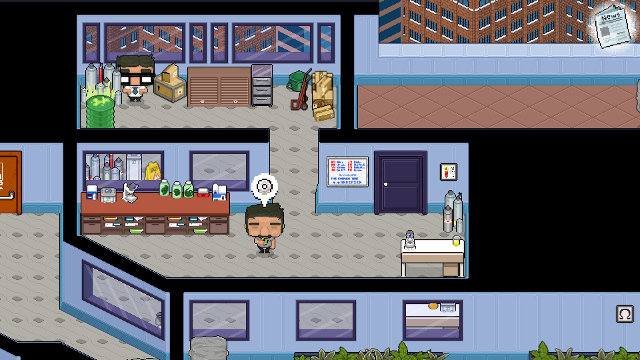 This guard is about three seconds away from regretting some of his life decisions.

Contrary to initial gameplay expectations, and somewhat confusingly, you don’t actually get to keep any of the items you find from level to level. Level 2 introduced the newspaper, a handy-dandy one-stop vision obscurer for everyone less attentive than a security guard. And then Gary ascends the stairs to level 3, and… they’re gone? I guess he didn’t want to carry around his perfect amazing foldable disguise everywhere? And while I can imagine the how and why of not wanting to lug around a heavy cardboard box everywhere, and of the laxatives and donuts having limited shelf life and usability, why would Gary ever ditch a rubber band and an eraser? They fit inside any pocket he has! Hell, they’d fit inside his shoe.

Sure, ludically speaking, I can understand the notion of having the player tackle each challenge with a blank slate. The assumption of null-items significantly simplifies level design, prevents any order effects, and allows the designer to play with item layouts and combinations that wouldn’t be possible in a linear narrative. But narratively, it’s just really really weird. 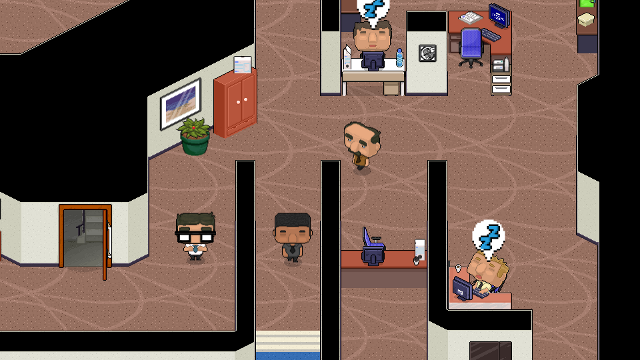 “Man. If only I had, like, a *newspaper* in this situation.”

And when most of the item uses and combinations are spelled out pretty explicitly, it’s rather jarring to have a few combinations that you-the-player have to find out for yourself. Donuts attract security guards, fine. You can use laxative pills on a donut box, to poison the next one you pick up… but not on any individual donut you already have in your possession? But with that individual donut, you can go to a can of toxic waste, and poison the donut in a different, green-glowing way. Neither of these two options are ever clearly codified, and neither occur more than twice in the entire game. And let me tell you: beating your head against a brick wall over and over because you can’t figure out a game’s maddeningly sensible untold logic is frustrating at best. 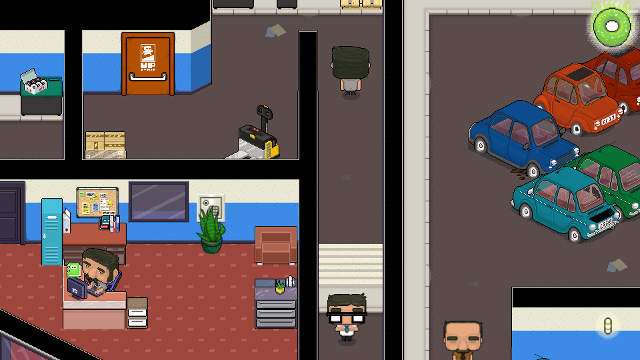 It took me a *long* time to figure out what I was doing wrong here.

The donut situation is really the worst example out of an otherwise functionally fine item system, though. And if you do get to wrap your head around this mode of thinking, later untold tricks — like the secondary uses for the lightsaber, and what kind of cool things you can get up to with coffee — flow much more naturally.

And item vaguary aside, Gary’s Misadventures does a pretty good job of slowly increasing difficulty through new environments, new enemies and new behaviours. Not every difficulty jump is equally smooth, still: ‘suddenly, now there are super androids’ is a ludic copout if I ever saw one. But it works. 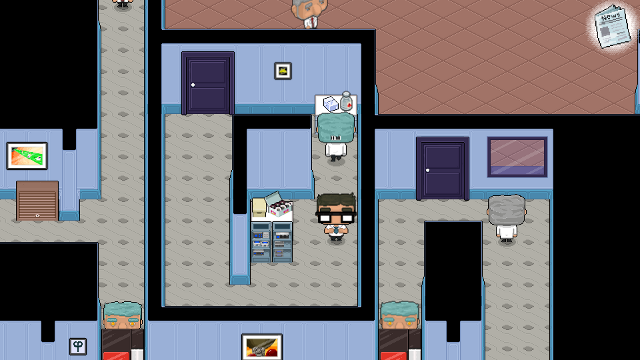 Unsurprisingly, Gary’s Misadventures’ boss fights involve a mix of stealthing around and using items. Except the last fight, which involves building robots somehow. ‘Common wisdom’ proclaims that boss fights should serve as a test of player skill, but Gary’s Misadventures eschews that idea in favour of thematically somewhat-fitting spectacle pieces instead. So much more in line with actual modern game sensibilities than with any design document, then. 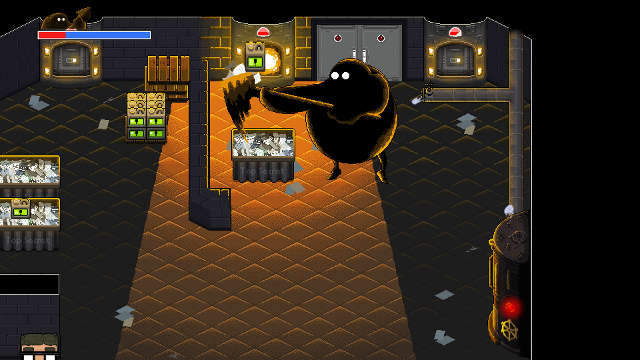 This makes no sense! But eh, it’s cool.

Control-wise, Gary’s Misadventures shows its mobile roots pretty clearly, though not distractingly so. The click-to-move works fairly alright, and using WASD to pan the camera instead of dragging is an alright compromise. I was confused by the unbound buttons for Action and Center Camera, initially, but it turns out those don’t really matter: you can execute any action with a contextual mouse click. I still preferred E-for-action most of the time, but the buttons defaulting to unbound isn’t game-breaking. Just weird.

And that’s Gary’s Misadventures’ gameplay in a nutshell, really. The regular stealth gameplay is pretty fun, and the toy hunting and safe-cracking add a few extra layers to the experience. Well, the toy hunting more so. Safe-cracking starts out as an exercise in spotting the letters, but ends up as an exercise in madness and frustration before long. Like this one safe, which you can only crack if you find a hidden, invisible, off-the-main path post-it note containing a semi-cryptic code. 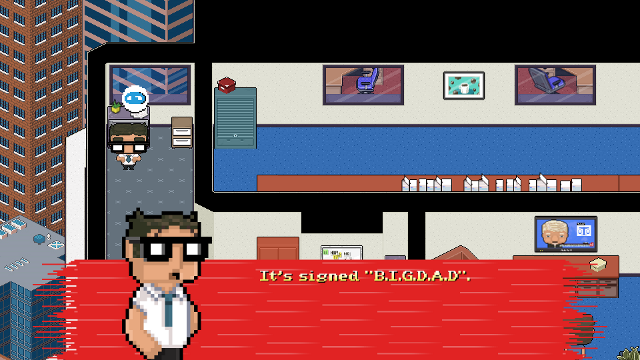 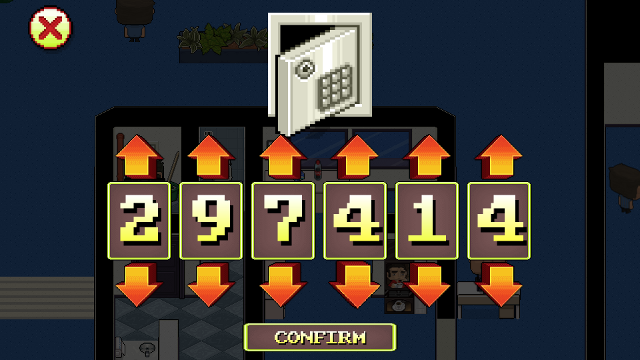 But yeah, this is the safe code for… that level. Forgot which one.

And the safe rewards? Nothing less than cool boss concept art, that’s what! 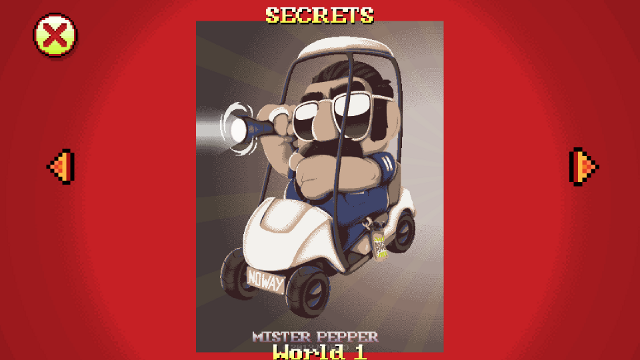 Maybe in this case, the journey is its own reward.

With regards to writing, Gary’s Misadventures showcases an interesting mix of internal and external parody, with a side of fourth-wall-breaking every now and again. Fun is poked at the game’s internally inconsistent world, at popular culture, at the developers, at video game notions… occasionally, a rare joke will manage to sneak in more than one of these at a time. Like at the start of level 3, when Marty tells Gary to take the ‘right door’. So Marty runs to the door on his right and ends up all the way down in the basement. “Oh”, Marty offers in defense, “I meant the other right door.” 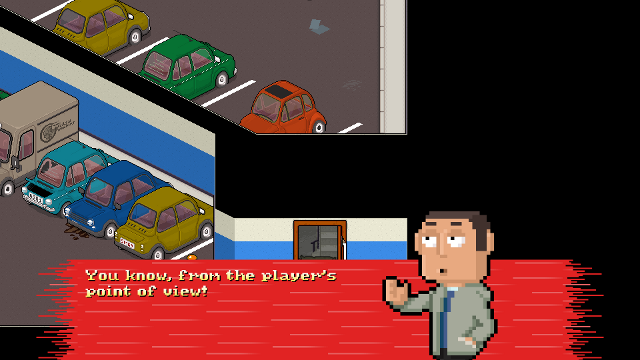 Graphically, Gary’s Misadventures has an interesting style all its own. I’m still not entirely comfortable around the giant rectangular heads, but hey: who am I to judge, in this strange, new world? The visuals are clean and interesting, and it’s usually clear to see what’s what and how everything interacts. I say usually, because there are some weird visual anomalies: invisible passages, walls that look like walls but aren’t… at one point I wanted to go through a door, except the door didn’t actually open. Which left me woefully unprepared for the guard that was directly behind that door, staring, dead ahead, never moving. 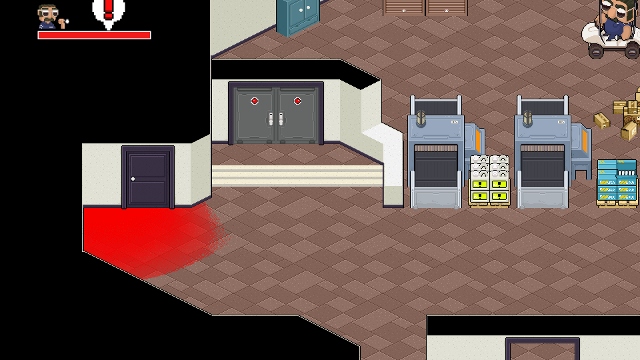 You will not get to see what happens behind this closed door. You should not *want* to see.

Gary’s Misadventures is a game that gets a lot of things right. It sounds great, it looks like its own interesting unique self, it controls fairly intuitively, and it presents an interesting take on the stealth genre set in an equally interesting environment. Growing from a mobile port has left it some shaky roots, and not all design decisions are equally strong: its optional puzzles quickly make the leap from ‘scrolling around and observing’ to ‘luck-based pixel hunting’, some of the inventory puzzles require Adventure Game Logic leaps, and I still maintain that people should not be allowed to instantly turn 180° whenever they so feel like it.

But for the most part, Gary’s Misadventures is fun. Short, sweet, to the point, with a lot to see, a lot to collect, and a lot to occasionally get super frustrated at.

Gary’s Misadventures can be obtained on Steam for six bucks. Six bucks is not many bucks, you guys! There is also an online Unity-based demo, which is even less bucks, and which showcases the first four office levels. That’s enough levels to wrap your head around newspapers, donuts, and cardboard boxes!

Just don’t eat the purple donuts. Or the green ones. Trust me on this one.