And now, for a game that… hold on, have I made this joke before? I think I have, back on Blue Screen of Awesome. But since that site’s taking an unexpected dirt nap again at the moment, I’m safe to plagiarize myself without fear of consequence!

“And now, for a game that’s the digital equivalent of ‘found in a dollar store bin'”: Noego Games‘ Level 22: Gary’s Misadventures. I ran into it in some one-dollar bundle or another, and its purported office-life stealth-type gameplay appealed to me inner ‘shit, what game am I gonna do this week’. I mean, my inner games connoisseur.

And I think we can all agree that this joke was worth recycling at this length.

As the opener to Gary’s Misadventures, Gary’s Main Menu is… rather sparse. Neat-looking, mind, and I dig the NES-sounding happy chiptune tune. Maybe less is more in this case? 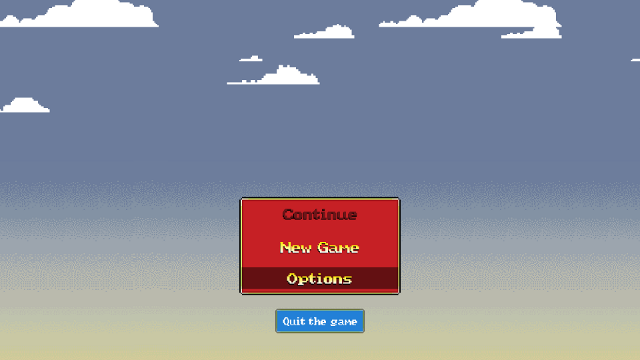 I guess I have nothing but the options to talk about, in this case. Not that I’d really want it any other way, but still.

Gary’s Options — yes, I will run this naming convention into the ground, thank you very much — are odd, and red. Which is not to say that they are odd because they are red: their redness is entirely unconnected to their oddness. They might be red because they’re odd, but… listen, I don’t know how that would even work? And let’s not even get into the possibility that some third, unexplored factor is causing both the red and odd denominators, because that’s way too much scientific rigor for this games review and nonsense column. 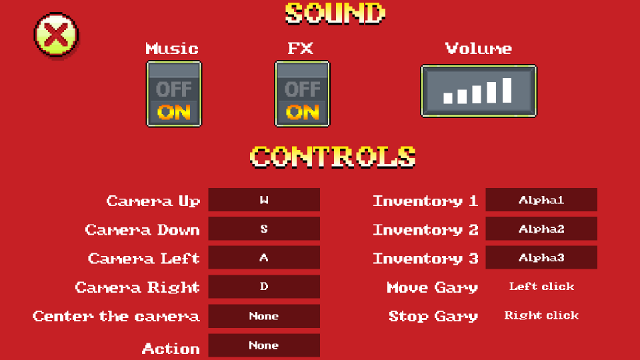 Okay, so there are binary Sound Effects and Music sliders, but also a five-step volume option? No graphics options to speak of, that I can see. And… a bunch of controls options, but a few of them start out unbound? And I’m not even allowed to change the mouse click commands, apparently. What fresh weirdery is this?

These design decisions become a little more palatable when I find out that Level 22 started life as a mobile-persuasion game: an environment where broad-strokes sound options are appreciated, and rebindable controls aren’t so much the exception to the norm as they are the bigfoot to our hoaxes. I can even sort of appreciate the work that must’ve gone into altering the ported version in this way… though partial success will, of course, only ever get partial credit. Good first step, Noego. Consider going for the full options set next time?

Options aside, Gary’s Main Menu holds no more magic for me. Might as well get started on the actual adventures, eh?

My adventures start off with a sleeping man. 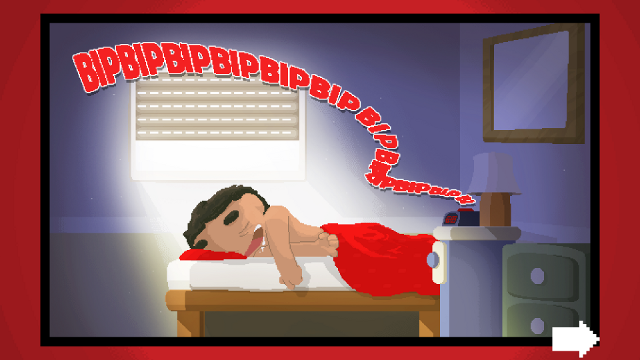 Just *feel* that excitement in the air.

Woken up by a persistent alarm clock, Sleeping Man is… holy Jeeves, what is wrong with his head? 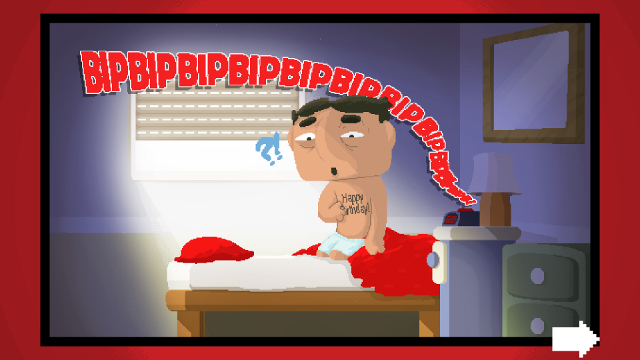 Anyway, I’ll give you the summary: Sleeping Man, the guy I’m assuming is Gary, overslept! He’s late for work, oh no! 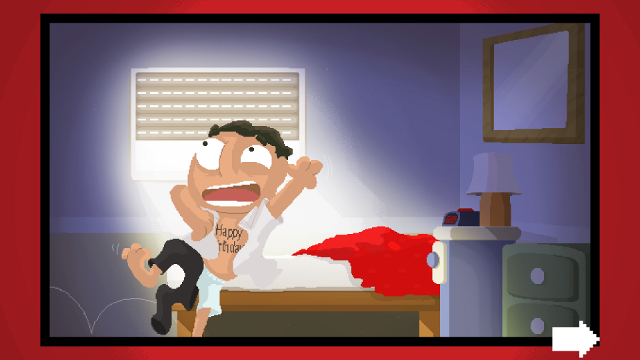 That’s… that’s it, I think? As far as I can tell, I’m about to play a game about a white-collar office drone being super late for work.

Which is actually an interesting deviation from video game tradition, isn’t it? Many video games provide fantastical locations and situations as a backdrop for the particular kind of power fantasy they intend to sell. But from the way things currently look, Gary’s Misadventures’ narrative conceit seems to be less badass power play and more ‘every office worker’s most mundane nightmare’. 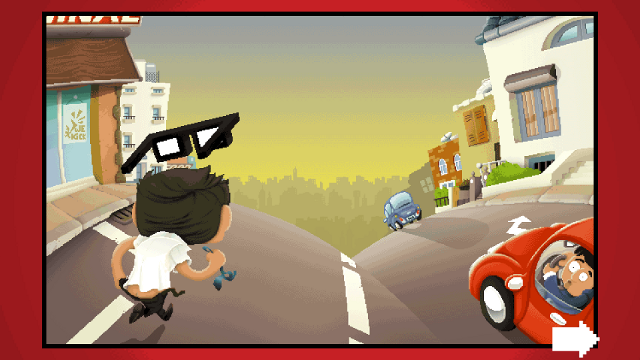 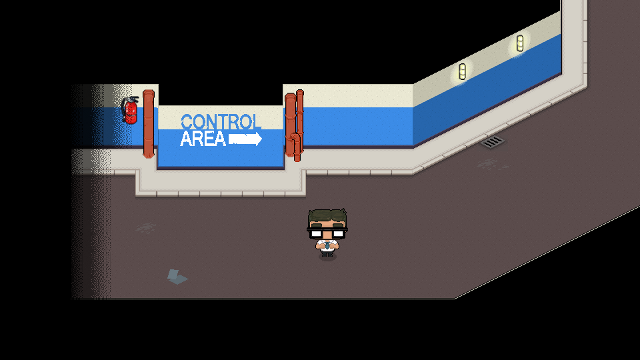 Alright, I don’t think I was expecting this. 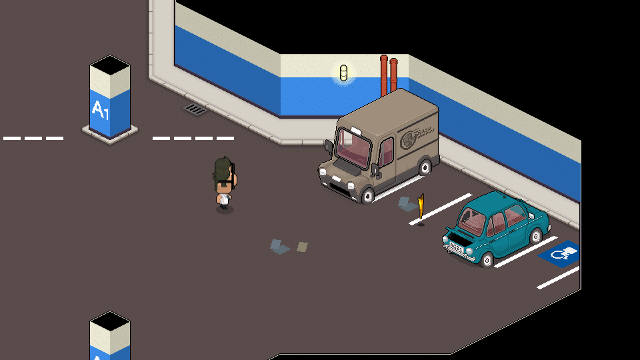 That’s cool too, I guess.

Through trial and error, I discover that I can control Gary by clicking. The WASD keys, which I briefly glanced on the Options screen, actually move the camera around. The other keys… don’t seem to do a whole lot of anything, right now. I guess I don’t have an inventory to speak of. 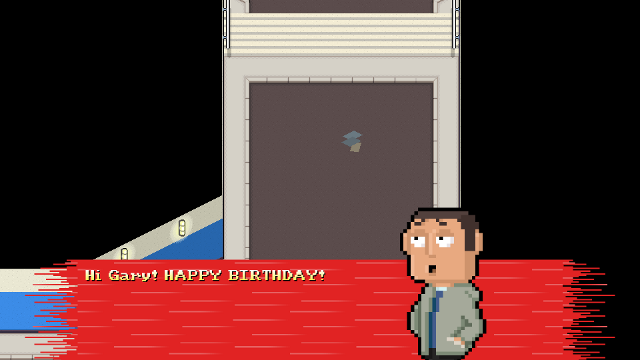 Thanks, Marty! My birthday was yesterday, but whatever!

Gary and Marty briefly set up the scene: Gary is entering work through the parking garage on foot because he’s been late so often that he’s in danger of losing his job if he gets caught. His mission, should I choose to accept it: get to his office on the 22nd floor — on Level 22, if you will — without being spotted by any single one of his co-workers. Succeed, and he’ll be able to pass it off as if he’d been there all along!

Or, well, that’s the theory, anyway. 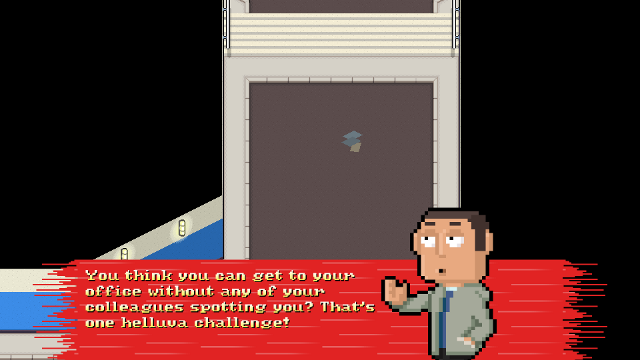 Marty’s right. This won’t be easy.

But wait, uh-oh: another fifteen feet down the line, a security guard sits in his glass bubble bunker of perfect vision! Am I to fail this soon?

Turns out, nope! Marty suggests that I ‘stick to the wall and avoid his line of sight’. Gary-I suggests that ‘that’s bloody madness, this man has working eyeballs, how is he ever not going to see me?’. Marty’s reply to this… 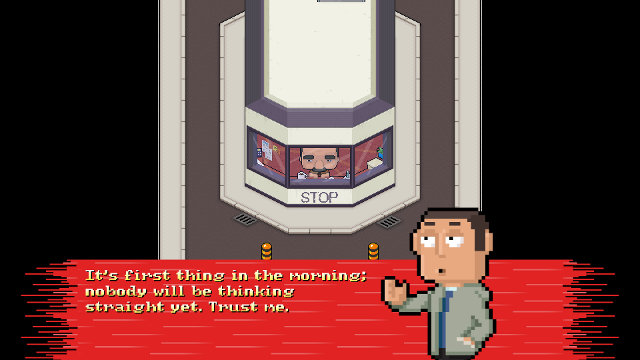 “Nobody is ever a morning person.” 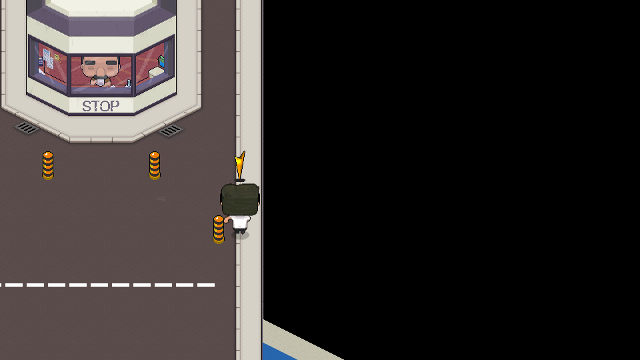 Would have been a short game otherwise, I suppose.

All jokery aside, I do get what Marty’s going for here. It doesn’t matter that people see me, what matters is that they recognize me. If I stick to walls and quickly move out of sight lines, people won’t know it’s me. They could easily be thinking about some other ruggedly handsome, square-headed, chronically tardy employee. 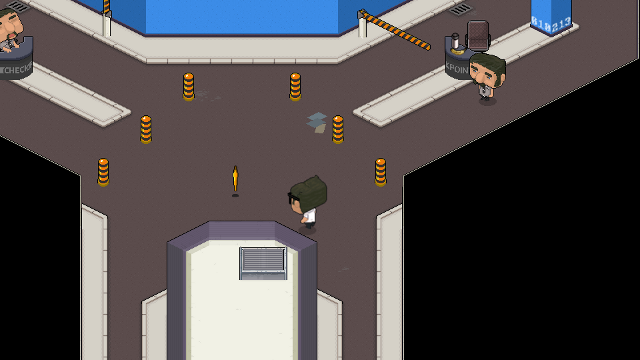 “I’m curious as to who that ruggedly handsome, square-headed, chronically tardy employee is. But not curious enough to actually go *check*.”

As I proceed, Marty informs me that I should probably be looking for the stairwell door. By taking the stairs, I can easily go up all the way to the 22nd floor! 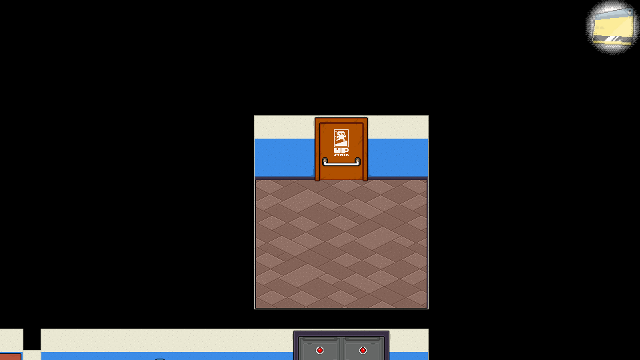 The parking garage slowly gives way to a few offices. I swipe an access card, breathe down a fool’s neck without him noticing… 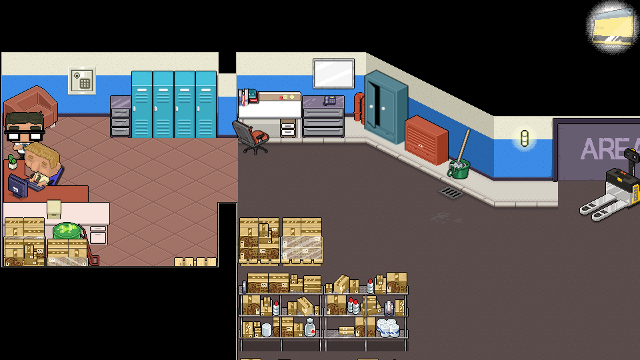 …I find a non-copyright-infringing toy that belongs to Marty… 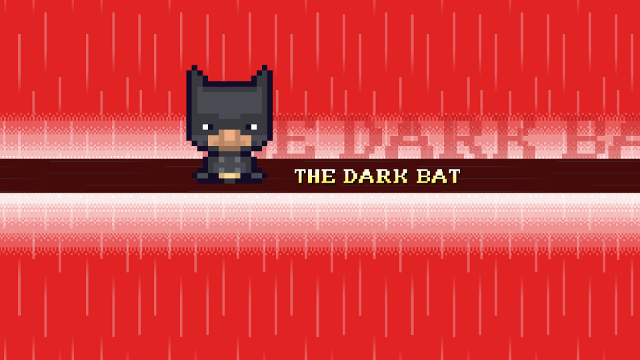 There’s twenty toys. They’re optional collectibles. And yes, most of them are like that.

….I even run across a safe, containing possibly classified information! It has a six-figure combination lock, though. Marty suggests I look around the environment for inspiration, to ‘try to imagine the numbers that occurred to the guy who made the code up’. But no dice.

No, but seriously. I’m looking around this tiny office, and… is Marty talking about, like, counting different kinds of objects? Or are there numbers hidden in shapes, somewhere? Or is all of this meta-commentary on the folly nature of careful encryption? 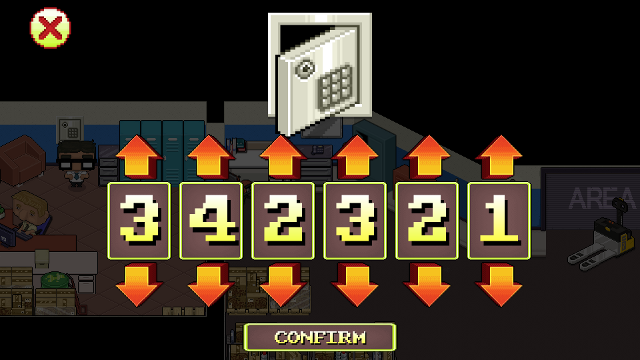 It could be? I honestly don’t know!

Well, whatever. That safe probably wasn’t that cool anyway.

I grab an access card, use it to open a locked door, walk through, and get caught immediately. 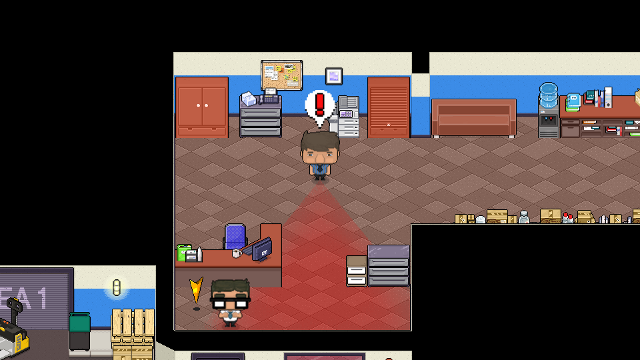 Welp. Guess it was a short game anyway!

Turns out: the room I was running into blindly provides working room for one man. Said man sits behind his computer desk for a while, then walks to a printer to fiddle with that for a few seconds. Then walks back, sits behind his desk, and so on. I ran in just as he turned around from his minute-ly printer run… I had a brief second to get out of his line of sight before he could identify me, but I was too startled to arrest Gary’s forward momentum. And once I got close… 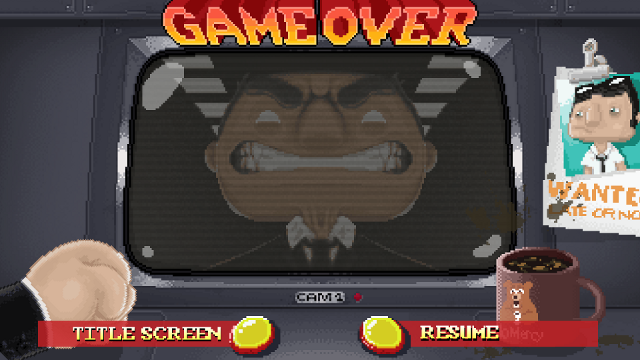 Gary’s Misadventures gracefully deposits me back into the narrative a few minutes prior to my mistake. I don’t actually know why it dropped me where it dropped me: I think maybe picking up the access card has had something to do with it? Regardless, with my lesson learned, I proceed through the locked door in a more careful manner. I avoid Office Dude, sneak past the hallway, and enter the stairwell to freedom. 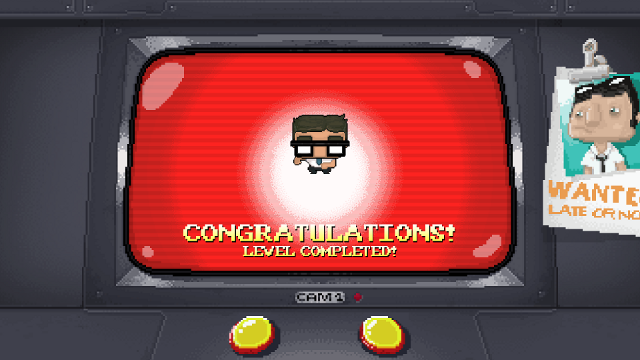 Sweet! It’ll be smooth sailing from here on out.

The stairwell brings me to… level 2. 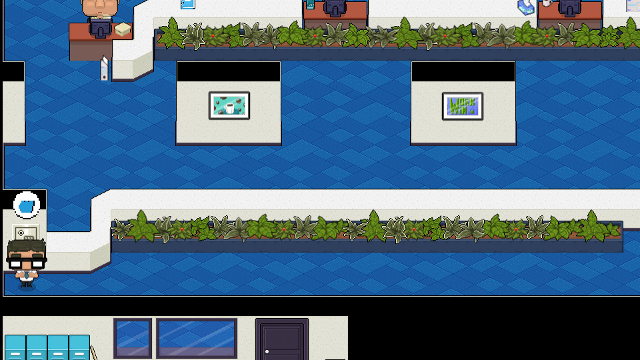 This is markedly *not* what I’d been hoping.

Wait, hold on, what? How does… don’t stairwells usually cover the entire height of the building? Or at least significant parts of it? How does this particular stairwell only get me up one floor? Is Gary in such poor shape that he has to take a breather after a single flight of stairs?

Alright, whatever, I’ll roll with it.

Floor 2 has another one of those safes, right next to a row of plants. Look at the screenshot before the previous one. And, okay, I got this one: the code has to be related to the different kinds of plants, right? Like, it’s X of plant one, then Y of plant two, Z of plant three…

I try every different permutation of plant kinds I can come up with, taking palette swaps and mirrored sprites into account all the time, but the safe won’t budge. Man, screw this noise.

But then, just as I’m about to give up on safes entirely… 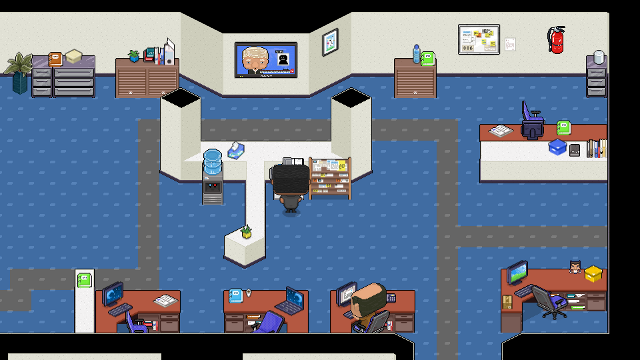 Look at the full-screen version of this image. Top right corner. Look *closely*.

Oooooh. So that’s what Marty meant. The guy who coded this safe lock took inspiration from two three-number codes, posted on different pin boards, on two different sides of the building, neither of which are in line of sight of the safe at all! It makes so much sense now!

In fact, using this knowledge, I can go back to level 1, and see that…

Okay, alright, dropping the cynicism: this is complete and utter nonsense, but hey, it works. Safe codes are clues hidden in the environment. Gotcha.

Moving on, floor 2 also has a few new tricks up its sleeve. Like this: 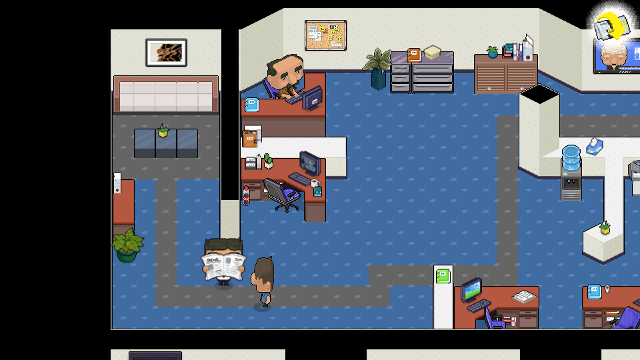 And on floor 3, I crawl through air vents and distract security guards with donuts. 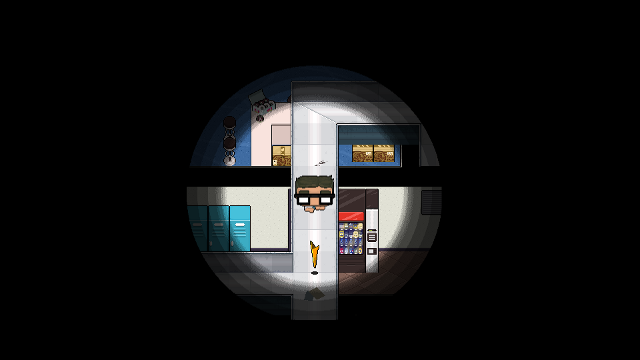 Didn’t Mythbusters do this once?

It’s not until floor 4 that I hit a major snag. I have to cross a room full of decaffeinated software developers, who fall asleep in a predictable rhythm every few seconds. They wake up fairly quickly, too soon for me to dash across their field of vision, and I have to get so close that they spot me anyway.

I try sneaking past their desks and waiting them out there, but that doesn’t really work all that well. I try running, but that fails. I try wall-hugging, but no luck. 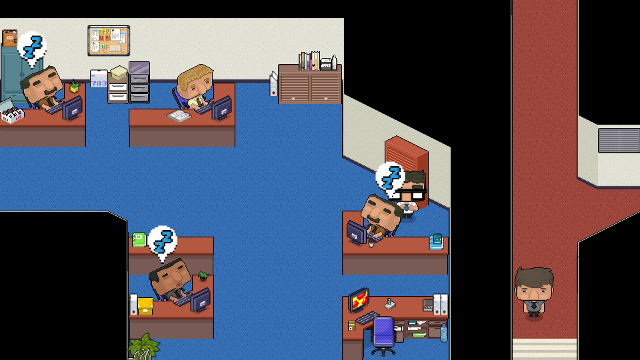 I try singing lullabies, but these men are *expert* sleepers.

Stuck as I am, this looks like a good moment to give my brain some rest. Just because these guys are sleep-deprived doesn’t mean I have to lower myself to their level to combat them, after all.

Be back after I get the sleep I need to get Gary all the way to level 22!