I vaguely remember playing QCF Design‘s Desktop Dungeons a long, long time ago… back in the half-forgotten fog of history that was…

2010? Can that be right? It definitely feels longer ago than that. But then again, I guess the strongly future-sounding year of ‘2010’ is already three and a half years ago. Which, let me tell you: I know my Bluesian co-host Justin is not a fan of this phrase, but nothing makes you feel old quite like the realization that a time period you vividly remember being the ‘future’s future’ is now the past.

Anyway, what? Sorry. Desktop Dungeons, then! I played it a long time ago, back when it was free and pixels. Now it’s pricey, and even more pixels, and I’m looking forward to seeing just how much my memories of yester-yester-yester-yesteryear have lied to me.

After a mandatory online-account login, Desktop Dungeons opens on a view of a gorgeously-drawn desk. The desk is layered with lots of decidedly non-dungeon clutter, but hey.

I’m afforded about one point five seconds of taking in the title screen view before Desktop Dungeons requests a ‘Kingdom name’. I’m… not entirely sure what I’m providing this for? I thought this game was about Desktop Dungeons, not about… Countertop Kingdoms, maybe? Does that work? No, it doesn’t, I broke the literal alliteration. Kitchen Kingdoms works, but it’s less of an immediate comparison.

Moment of focus. I’m to name a kingdom, for whatever reason. You get three guesses as to what name I put in. And contrary to popular common mode of operation, all your guesses count. 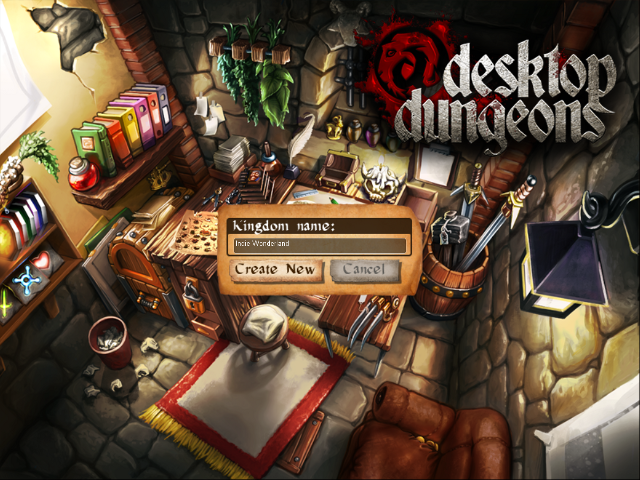 Luckily, I am very tolerant with regard to faulty guesses.

Immediately after bringing this kingdom into existence, the story begins. 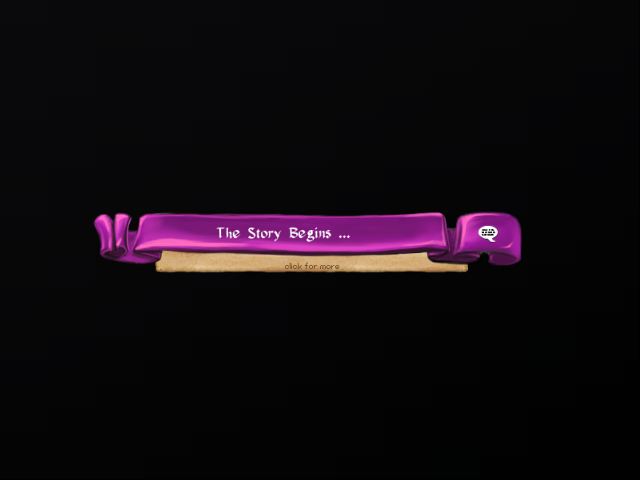 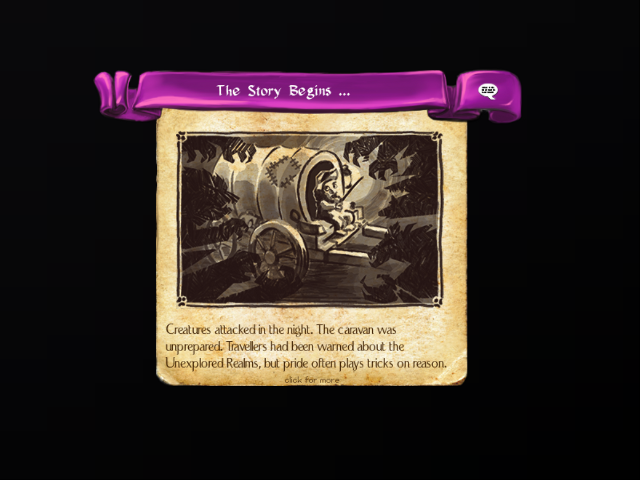 Oh, and the caravan was ‘unprepared’ too. Christ, what a punch of posers.

The caravan get attacked by monsters, people get eaten, fires get started, and only the smarter among this rag-tag band of brain cell aficionados consider fleeing into ‘a nearby network of maze-like caverns’. 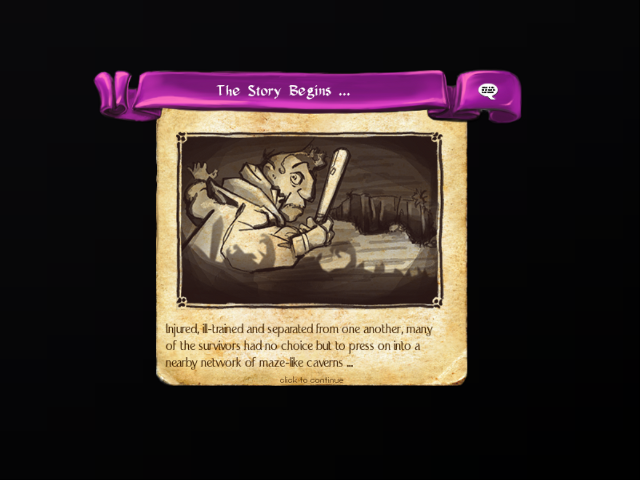 Clearly, this is a good idea and not a bad idea.

Which is where my story immediately begins. 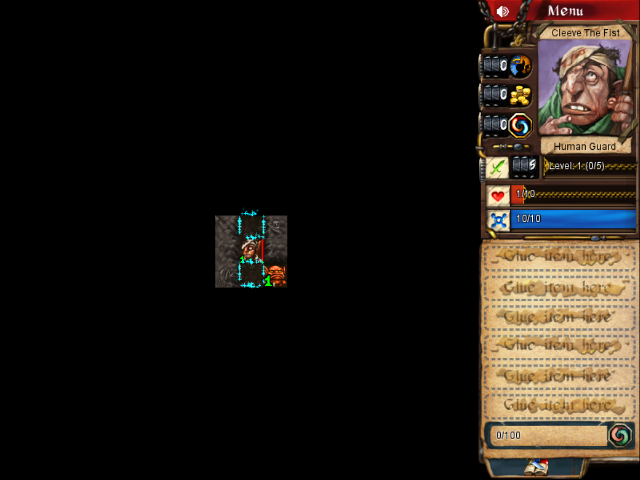 No, but seriously. I’m dropped into what looks to be the actual game right off the bat.

I… I literally have no idea what’s expected of me, here? I promise I’m not withholding any crucial information for comic effect here. Nor is this like that time in my XCOM Let’s Play where it turned out I’d flat-out missed the game telling me things. I even restart Desktop Dungeons, delete the Kingdom of Indie Wonderland, make it anew, and go through the slides again, only to be dropped into the exact same conundrum.

“Here“, Desktop Dungeons tells me. “Go play.” But how?

The map I’m currently looking at is made up of squares. One square holds a portrait of a bandaged, scared-looking man. Two squares, directly above and below the man, are glowing. I click on the lower square, and the man — Wirlwind Demighty, bonus points for the name — moves there.

The square to the immediate right holds an orange goblin. I click on it. The screen flashes red, and health bars go down! I click again. I die! 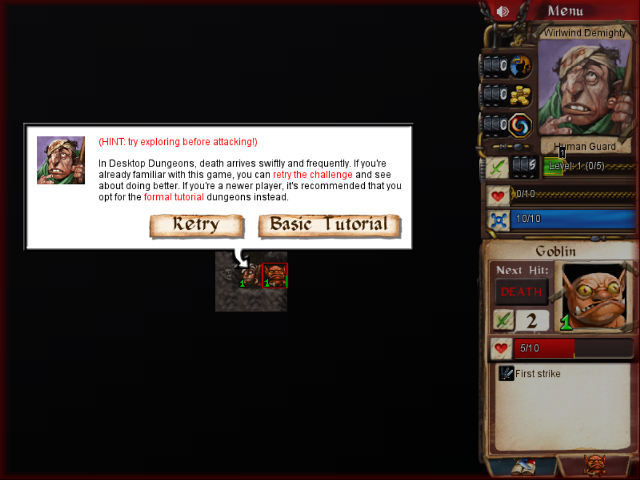 This is the point where Desktop Dungeons appears to take pity on me.

Oh thank Steve, an actual tutorial. Was that so hard, Desktop Dungeons? Why wouldn’t you just start me off with this immediately, come to think of it? 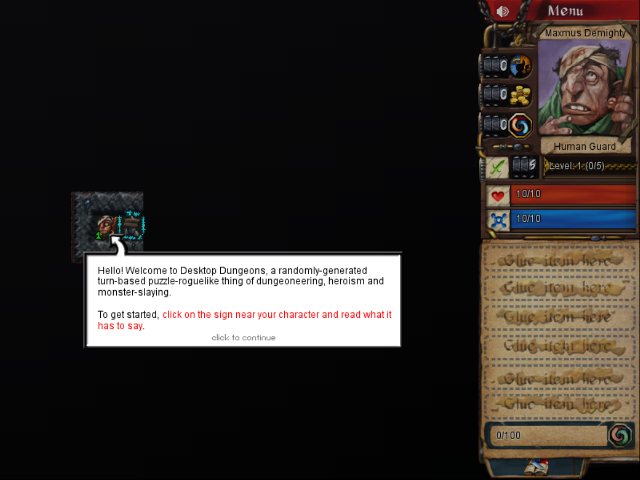 “That’s just not how we roll.”

The first tutorial, set in the ‘lost Tut’Oriel Wan dungeon’, introduces me to the basic mechanics of Desktop Dungeons. They go a little like this:

Desktop Dungeons is a turn-based, square-grid based roguelike game about exploring dungeons. I control one adventurer, a Human Guard called Maxmus Demighty — siblings, maybe? — and my goal is to… not die like a doofus, I guess?

Clicking on empty dungeon tiles moves Maxmus around, and reveals immediately adjacent tiles. Like another orange goblin, just out of sight range of my starting location! 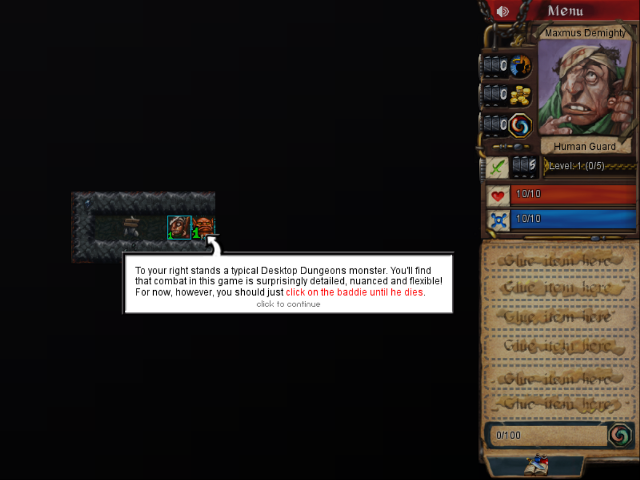 While I’m a little hesitant to follow the exact same course of action that got me killed not two minutes ago, it turns out that Maxmus is made of some hardier stuff than his brother Wirlwind. This time, it is the goblin that turns into an impromptu dungeon paint job. 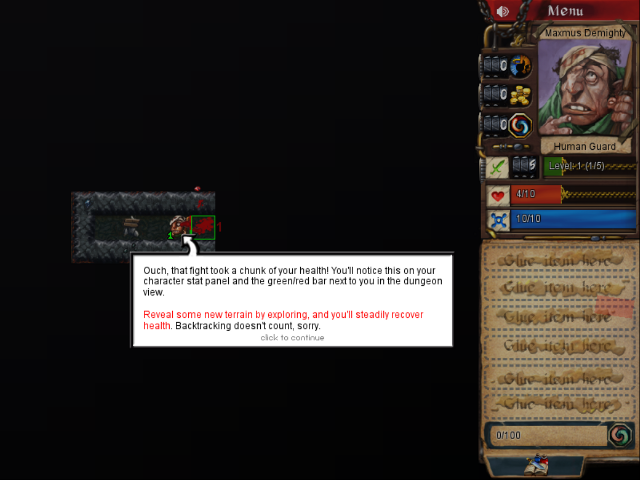 The hurt Maxmus can regain his health by exploring dark dungeon tiles, to the tune of 1 health (and 1 mana) per tile uncovered. Regenerating by exploring nooks and crannies? I could get used to this.

Further into the dungeon, a totally non-copyrighted meat-man creature of some sort blocks the way. The creature is level 2, and I am level 1, which means attacking it would likely cause a repeat of the Wirlwind Incident. What do I…?

But wait! In a side passage, a handy-dandy conga line of weak human bandits provide me with all the experience I need to raise to level 2 myself! Doing so fully refills my health and mana, and provides me with both bonus health and bonus attack power. 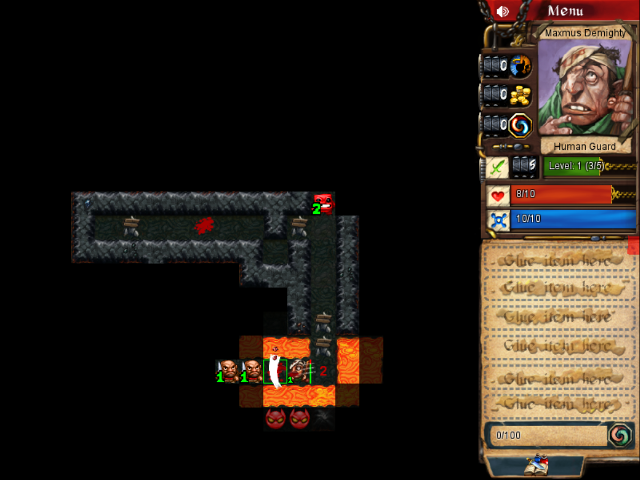 And all it takes is some premeditated murder.

Now twice as strong as I was before, the non-copyrighted meat-man creature of some sort quickly falls before my mighty might. Wow, this dungeon exploring is easy as pie! Will no single monster in this dungeon provide a challenge I cannot overcome? Or is the adrenaline rush from repeated easy victories making me feel ridiculously over-confident? 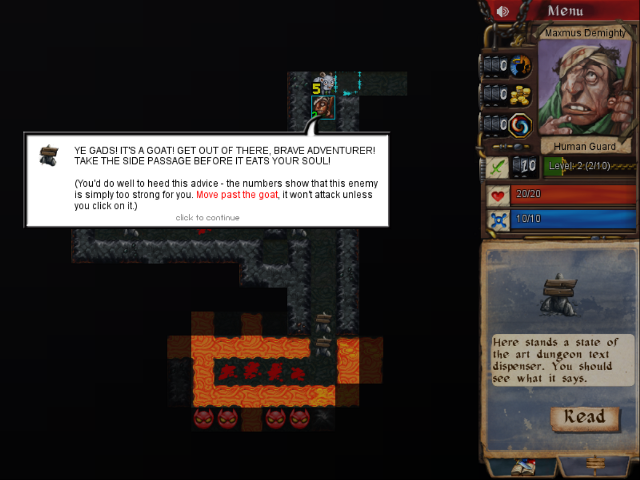 It’s the second one.

Shit, a goat! I can’t deal with that! Luckily, I can just side-step it: monsters in Desktop Dungeons have no initiative of their own in any way, content to simply stand in one place forever unless attacked. As long as I do not strike this goat, it will not strike me. Time to slip past it, go for the exit, and… 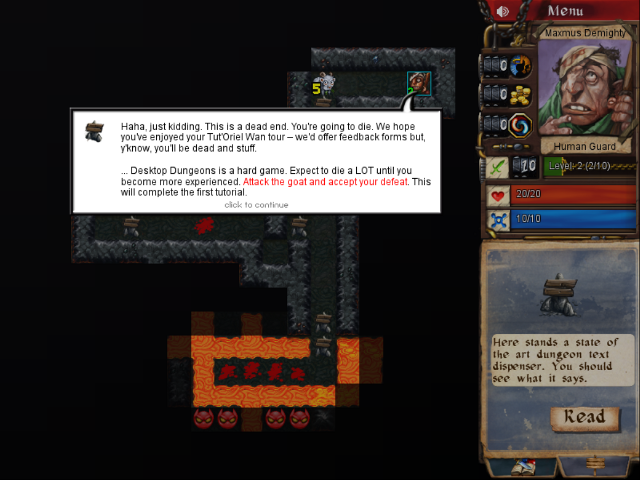 My death, which is as unavoidably sad as it is messy, serves as the catalyst for getting me into the second tutorial dungeon. This dungeon introduces the idea of collectible powerups, immediate boosts to health, mana and damage that are totally sweet. 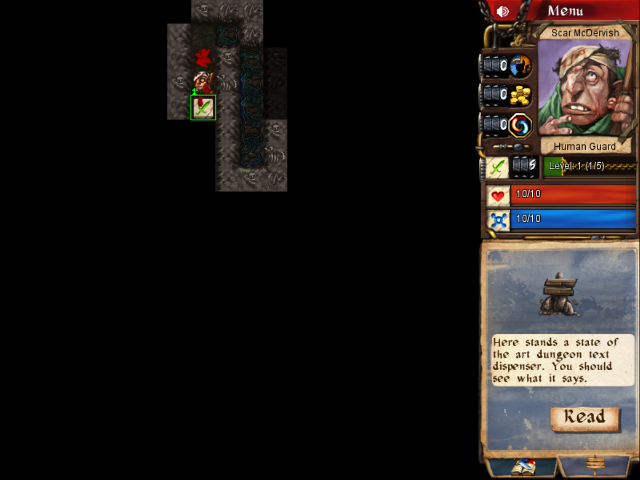 “I am sure glad I can derive my power from these non-sapient glyphs, instead of from the murder of innocent life forms!” 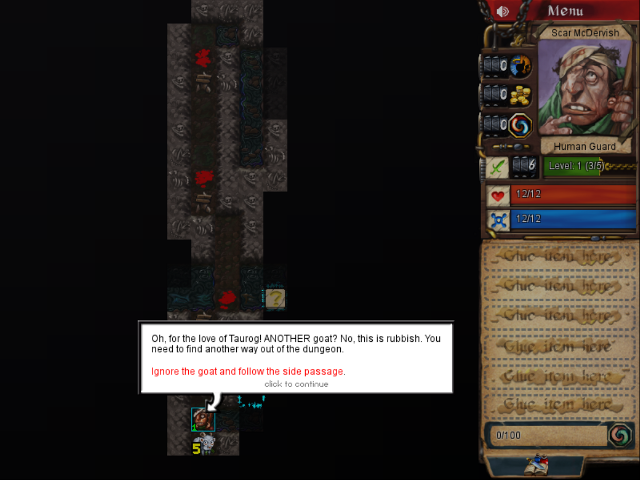 …as well as the idea of not getting murdered by goats, and just running for my life instead. 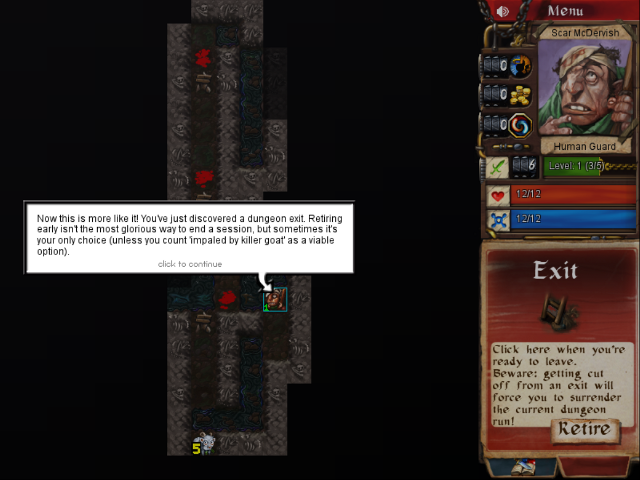 Sharp minds will remember that this is exactly the plan I had for the *first* goat. Except this time… I guess it actually works.

As Scar McDervish is my first dungeon explorer ending his career in something else than death, it is he who finally manages to make it out of the dark, mazing caves… and into the wild green beyond.

There, a gnome helps him found a kingdom. 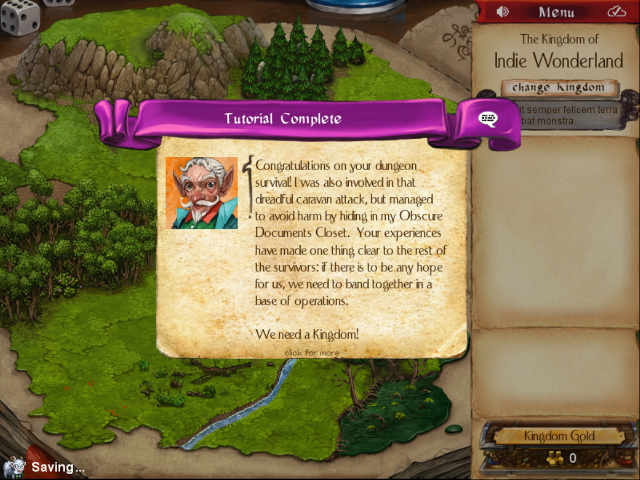 As gnomes tend to do.

No, but wait, hold on. What? Weren’t these people supposed to be survivors of some ambushed caravan or another? How are we suddenly founding a kingdom? Is that how the rules work in this weird-ass universe?

Wait, am I looking a gift kingdom in the mouth? What the hell’s the matter with me?

The new kingdom of Indie Wonderland starts off small, with only a small village holding the other caravan survivors. As Scar takes up his rightful mantle of King — couldn’t have planned this better if I tried, really — the Nameless Gnome ingratiates himself as Non-Evil Adviser. His first piece of advice? Go right back into the dungeons. Our coffers our empty, and our people need to make money somehow.

Except, you know, King Scar isn’t going to dive back into lethal adventures himself. Rather, I can now recruit adventurers from my kingdom! Right now, the pool is a little limited… 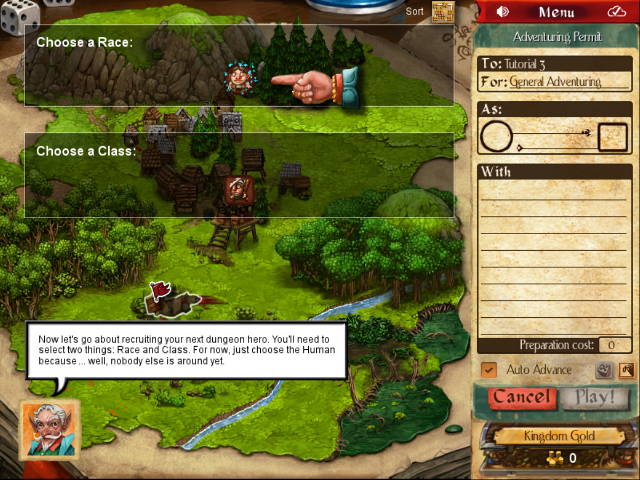 …but I’m sure I’ll get to more options in the near to far future.

In fact, the third tutorial dungeon — which introduces spellcasting and ‘item conversion’, but let’s not get into that for now — provides me with enough precious golden assets to build an official adventuring guild hall. Leading to my first non-useless adventuring class: the Fighter! 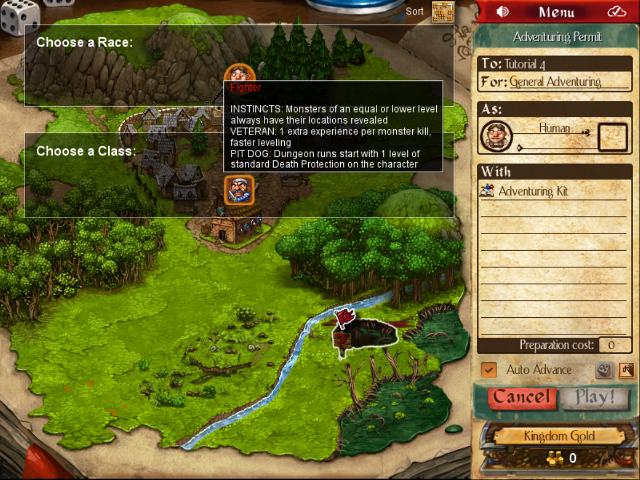 Finally, someone who *knows what they’re doing*.

And so it is Maxmus Dungenir, Human Fighter And All-Around Badass, who will go down into Indie Wonderland annals as the first human alive to ever best the dreaded Goat. 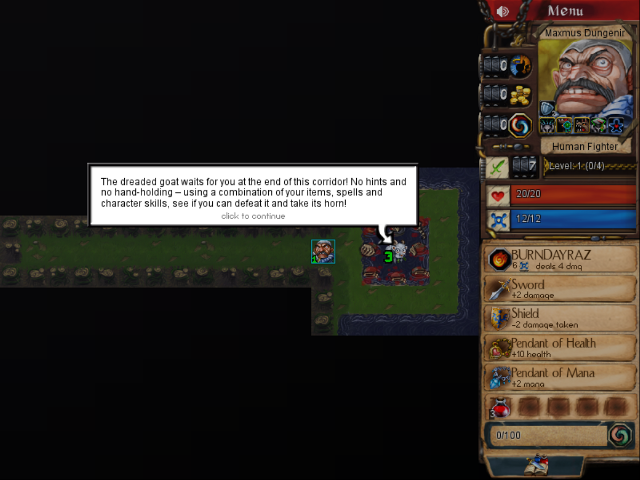 May tales of his valor be forever sung over the trophy horn that commemorates his victory.

The kingdom of Indie Wonderland is now officially post-tutorial. And options for future adventures abound: our fledgling city is best on all sides by all manners of caprine dread, and wizard, priests, and dastardly rogues are all flocking to prove their adventuring mettle. 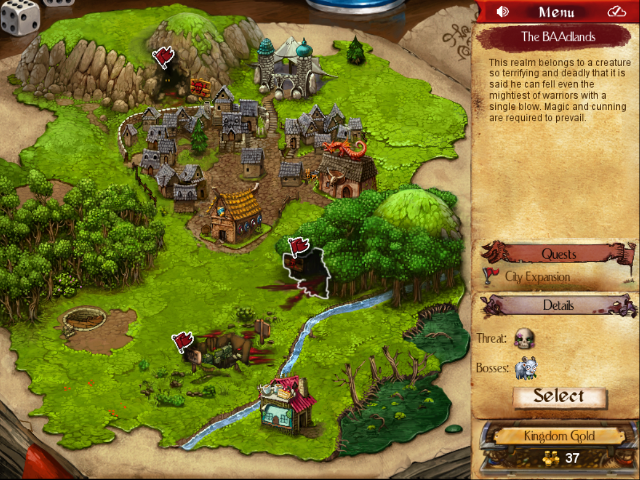 It is good to be the King.

See you on the other side of history!