Hey, I killed Gibby and Stu! Their dual-worm-dance was pretty annoying, but proved no match for my bouncing-revolver-bullets style of kung fu. 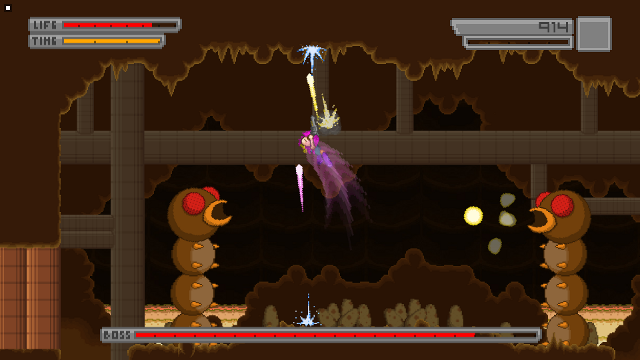 After that, I killed some more heroes: a robot, a racer, a dragon. Man, I took that dragon apart. Bet you’ll think twice about mocking Android now, dragon.

So am I the best hero in the world, now? …No, I’m not. But not for the reasons you might think! Unless, like me, you saw a certain plot development coming, in which case it’ll be exactly what you might think. But regardless, the reason I’m not Hero God-King yet is one of the few real narrative spoilers I could dole out for this game, so I’m not going to tell you. Just take it from me it’s unfair.

Before moving in to actually claim the title of Number One Hero By Virtue Of Literally Being The Only Hero Left, I have time for some reflection. What do I think about Bleed, so far?

I’m going to go with ‘eh’, historically my least favourite answer. Bleed is a functional high-mobility twin-stick shooter. It’s pretty to look at, it controls well, and the writing is fairly funny. But… it doesn’t strike me as in any way remarkable? It offers a fairly ‘standard’ twin-stick shooter experience that isn’t really lacking in any aspect, but which doesn’t anything particularly new to the table either. While the core systems of running and jumping and moving and shooting are alright, most of the additional gameplay systems feel bolted on, lacking in value, and disturbing the fine mechanical equilibrium.. And while the boss fights in particular are all at least somewhat inventive, so little else of Bleed very often pops. 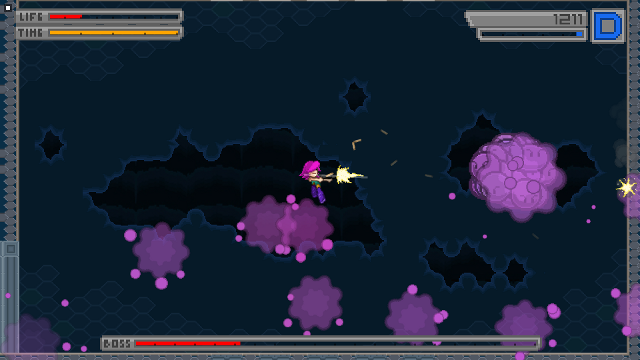 Except this particular boss, who pops all the time.

Good before bad, except after C. That’s how the rule goes, right?

Bleed looks really very nice. Sounds very nice, too. There’s not a whole lot that I could convey here in words that wouldn’t be better demonstrated by the screenshots liberally peppered around this review, so here! Have another. 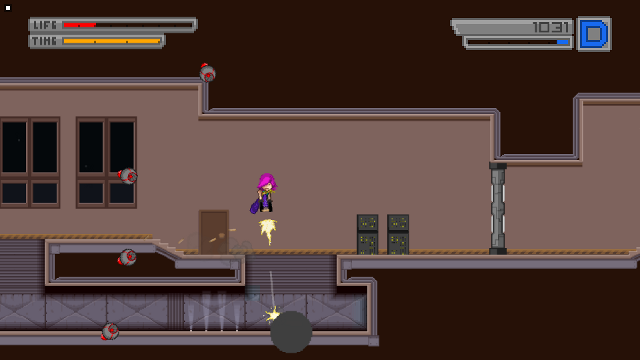 Bleed’s systems control quite well. Particularly with a controller, the basic control modes for movement and action provide a very short gap between thought and action. I was dashing in-between bullets and shooting dudes left and right, is what I’m trying to say. Even the keyboard controls work to a certain degree: I’ve already mentioned that the ‘zippy’ nature of the air-dash combat is hampered by the WASD-controls’ lack of directional granularity, but apart from that, the keyboard controls aren’t in any way particularly odd or badly designed. They might even work better for some situations, I wouldn’t be surprised.

Running through Bleed’s levels often provides a base visceral level of enjoyment vis-à-vis ‘shooting dudes’, occasionally enhanced by a timely explosion or cartoonishly gory blood shower. And while failure and health loss come fast and often — at least on the Hard level of difficulty — most failures can (at least in theory) be reduced to either personal mechanical mishaps, or faulty situational understanding. If there are any DIAS ‘gotcha’ moments in Bleed, I haven’t recognized them as such. 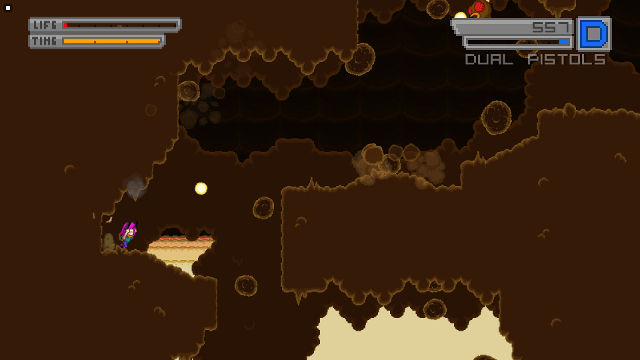 For instance: this particular section was frustratingly hard… until I remembered I have the power to slow down time. *Whoops*.

Though I’ll caveat that this doesn’t hold for every situation. 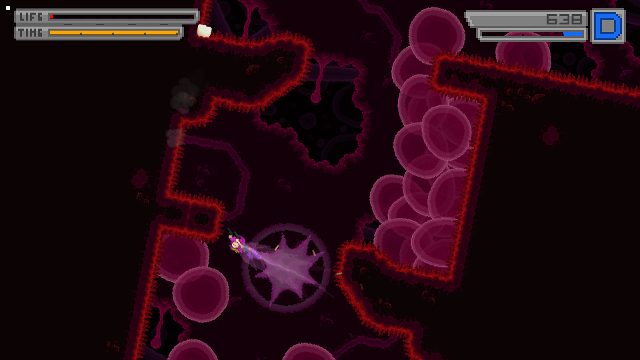 The randomness inherent in this particular challenge needs to go take a *long* walk.

Finally, Bleed’s writing occupies a space on the quality spectrum somewhere between ‘okay’ and ‘quite good’. The general storyline is weird, but at least internally consistent enough to not cause any issue. And Wryn, a.k.a. Pink-Haired Murder Girl, has several boss-related comments or Game Over messages that managed to make me chuckle. 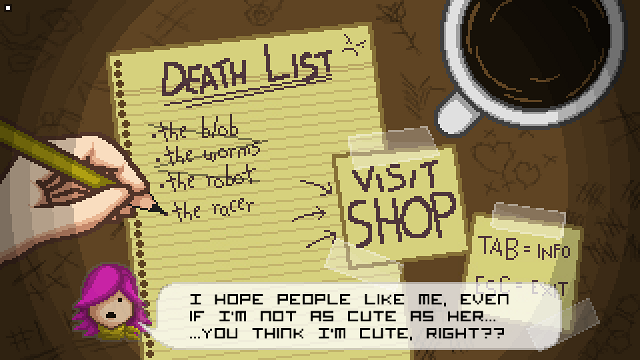 She’s a little needy every now and again, but hey.

All in all, the combination of audiovisual aesthetic appeal, clean and responsive functionality, and decent writing provides a pretty, functional shooting experience.

While what I would call Bleed’s ‘core’ systems are all in a certain sense of necessary balance, none of its ‘additional’ systems seem to add much. They’re all just… there. Bolted on, set dressing.

The store and unlockable guns-system is (in my eyes) clearly the worst offender here. By gaining points, you-the-player gain the possibility to unlock a small number of additional guns. But it very quickly becomes apparent that none of the unlockable guns synergize with Bleed’s basic gameplay as well as the basic aim-and-shoot twin pistols. It’s not for nothing that I continually refer to Bleed as a ‘twin-stick shooter’, because that’s basically what the game is.

Some of the guns have gimmicky situational appeal: the revolver works pretty well against the second boss, the flamethrower does decent service against minion hordes, you get the idea. But most of them are just… eh. Why would I want a slow-shooting, careful-aiming laser, in a game based around jumping up and down like a hyperactive rabbit learning string theory? And why would I want a bullet-reflecting katana that I have incredibly poor individual swing timing over, in a game where I can just dash out of bullet’s way instead? 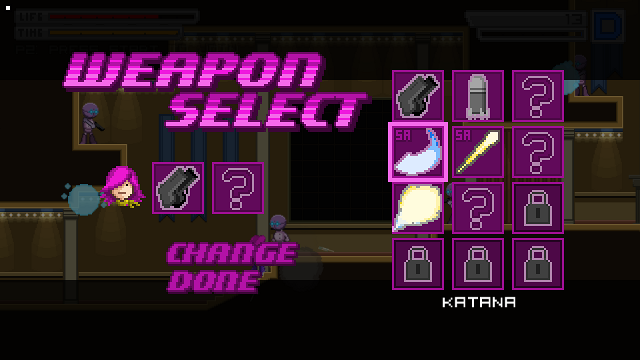 Go away, katana! Nobody likes you!

The other purchasable upgrades, health and energy and some energy turbo-boost, feel equally tacked on. They just change the length of the bars that — as far as actual gameplay is concerned — might as well only have two states: Full and Empty. They don’t change Bleed’s gameplay experience in any way of significance, and correspondingly, they feel empty.

Worse, the entire two-gun system feels out of place. I get the idea behind giving players a limited arsenal of situational effectiveness, I really do. But why give me ‘only’ two gun slots, when I can change my gun loadout at literally any time? Are you hoping I’ll stick to the guns I selected at the start of the level through some variant of the honour system? Because let me tell you: that’s not how I work. I’m carrying the pistols and the sword and a swarm of enemies pops up, I’ll switch to the flamethrower without a care in the world. All you’ve done at this point is give me an inefficient weapon-switching menu.

Or, well, I mean, I probably wouldn’t switch to the flamethrower, because the basic guns can do everything that thing can and then some. But you get the idea. 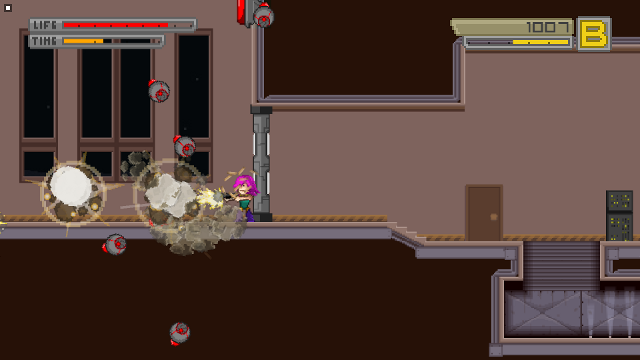 Who needs *other guns*?

A numerical score system would seem like a great match for a game like Bleed, but the lack of score-related externalities like leaderboards and objectives makes the whole system fall a little flat. The letter-based ‘bar’ score in particular seems only to exist to add an artificial layer of tension to boss fights, and nothing else. 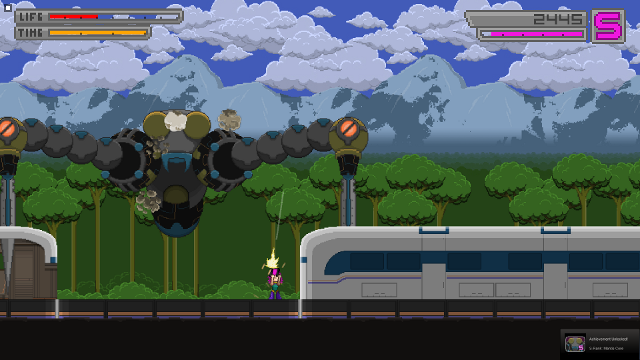 And to work in a few more Steam Achievements.

Score’s only real function in Bleed is to provide fodder for the upgrade shop. And I’ve already said my piece about that, haven’t I?

Finally, the time-slow mechanic… gets a pass, actually. It synergizes with the triple-jump air dash and the occasional bullet-hell moment too well for me to dislike it in any real capacity. Plus, it’s used to great ludonarrative effect in one particular boss fight. I won’t tell you which one, you’ll have to find that out for yourself.

So Bleed’s ancillary systems are so-so. What else don’t I like? Well, Bleed’s level design is… odd.

Progress in Bleed is incredibly death-focused. It’s possibly I’m just incredibly bad at this game, but I’ve never managed to get through any area without some loss of life. In fact, I’ve never managed to get through any level without dying at least once. Again, this is not DIAS gameplay at fault: it’s simply that levels are so large, and so packed with fast-moving, fast-shooting enemies, that the chances of getting hit by stray attacks at least once fast approach 100%, which is also 1. 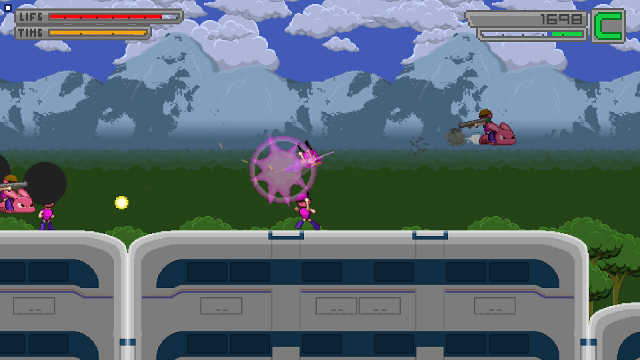 “Whoops, I took the mechanically correct action of dashing to nearby safety, but got hit anyway. Ha. Ha.”

Checkpoints are logically placed, at the start of each new ‘screen’, but the spacing is inconsistent: some ‘screens’ can be crossed in minutes, while others — the moving train and the apple come to mind — represent a significant set of challenges that needs to be cleared in a single life. And as there are no ways to heal save for dying and respawning, there is no real reason not to immediately die at the start of each new screen, to approach the challenges therein with full health.

This ‘realization’ turns level progression from a skillful endeavor into simple persistence: bashing your head against a brick wall over and over in order to proceed. 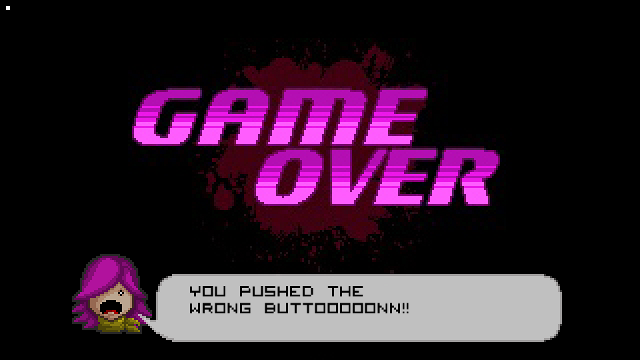 Finally, while Bleed is audiovisually alright, it has — to me, at least — low kinesthetic appeal. It just doesn’t feel a lot of fun. Enemies generally just kind of pop to death, blood sprays and explosion particles notwithstanding. While the dashing and the jumping is generally sweet, the actual combat gameplay is just kind of… a point and kill adventure game, I want to say. Aim your stick at enemies that leave existence in an unsatisfying way. Take damage from attacks that somehow feels like both a personal failure and an unavoidable act of randomness. And generally just sort of dawdle your way through a level, checkpoint-to-checkpoint, because why would you put anything more than the minimum amount of skill into it? There’s no penalty for death and no reward for exceptional success except more points.

It’s hard to explain why all of this feels the way it does, it really it. But it just does.

Okay, the final kid boss can go take a long walk. I kind of like the mirror-battle aspect of it, but why is he so much more powerful than I am? His weapons are so much cooler? And why can he touch me, but I take damage when I touch him? I honestly feel like I didn’t win in any way because I’m the ‘better hero’, but just because of my magical power to respawn over and over. 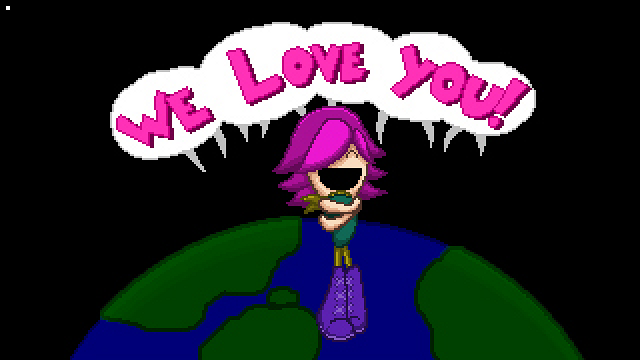 In the end, Bleed is a good-looking, well-written, functional acrobatic twin-stick gameplay experience. Weird checkpointing and bolted-on systems cause the final gameplay appeal to be lower than you’d expect… it’s definitely not bad, in any way, but neither is it great. It just is. You could get it, and play it, and you’ll probably be entertained for a while.

If that sounds like something you’d be way into, Bleed can be obtained here for about five dollars. It has demos too, of both the PC and Mac variety, so as always, I recommend taking full advantage of this.