…dangit. I don’t really have a funny opening story for Bootdisk Revolution‘s Bleed. I received the game as a gift from a fan/Steam friend about a month ago, and as many of you might know by now, I am hilariously vulnerable to all kinds of peer pressure. Real peer pressure, implied peer pressure, imagined peer pressure. Even explicitly stated non-peer pressure — i.e. ‘I absolutely and under no circumstances want you to review this game!’ — works like a goddamn charm on me. My fate was basically sealed when I saw the notification email pop up.

Or, sure, I could go with the non-imaginary narrative, which is that Bleed looked at least reasonably interesting, as well as short enough for me to get a good overview of in a week filled with heavy work demands and repeated failures to make Space Engineers play ball. Pick whatever story you prefer, really. It’s like a choose-your-own-adventure-review all over again! Except you only get one choice in total, at the start of the review, and it doesn’t influence the proceedings in any way whatsoever.

So probably closer to the actual CYOA experience than my previous outing in the field, then.

Bleed wastes no time in getting to the action. Or getting to the introduction, as the case may be, which is presented before getting to the actual game and which can — mercifully — be skipped entirely with a single mouse click. Not that I’d want to, not this soon, but I appreciate the future being taking into account.

It goes a little like this: in the year 20xx, there were heroes. Like, a bunch of heroes, y’all. Worms, and dragons, and robots, you don’t even know it. They did a bunch of cool stuff, and they were enshrined in a place called the Hall of Heroes as a result. ‘It was a time of great deeds’, which sounds like an excellent time to be alive in.

This is not that time, though. 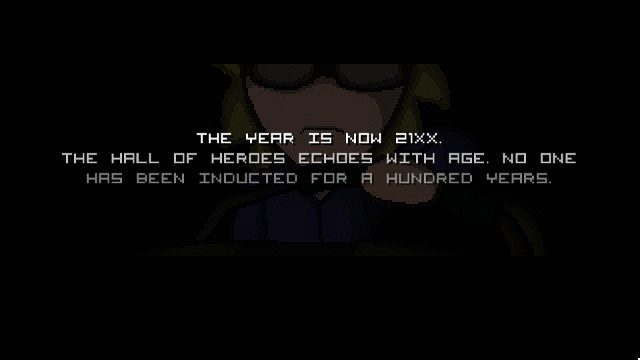 For at least one whole year — hey, that’s the danger of the xx format — nobody has been inducted into the Hall of Heroes. The old heroes have grown lazy, laid-back, content to live off their previous fame. This is, err, apparently a bad situation? According to the person telling the story — the blond goggles kid in the background, maybe? — it is, and it requires drastic action. 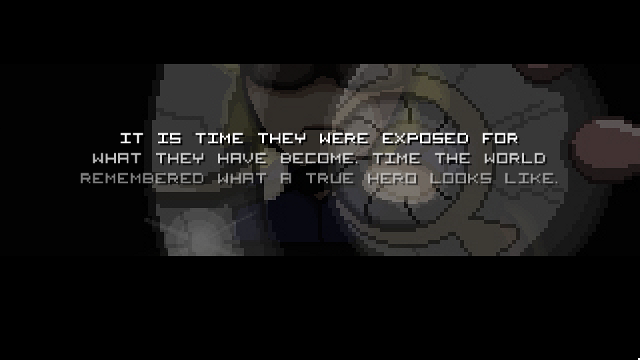 Why would I think that? No reason. 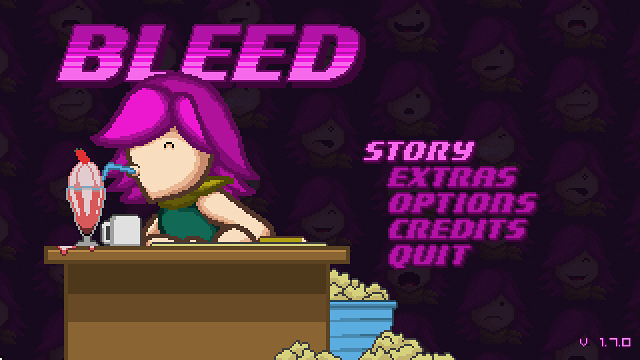 Call it a hunch, I suppose.

Bleed’s options are an interesting (pink) mix of PC and console design sensibilities. On the one hand, audio options are sparse, and video options are non-existent. On the other hand, there is an entire menu section devoted to ‘PC options’, including a full set of customizable key bindings. 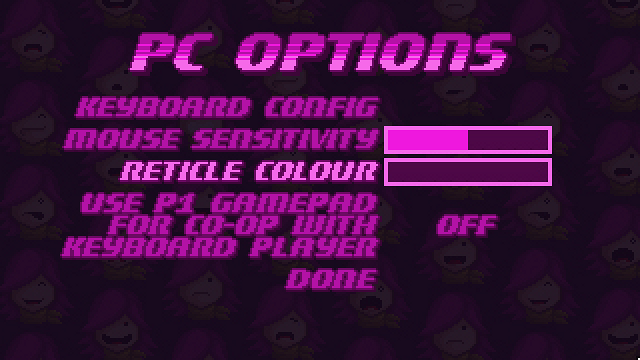 As the credits are just a barely readable mess of pink-on-black text, and as most of the Extras are alternate game modes I haven’t unlocked yet, I figure I might as well jump into the story mode at large.

Doing so brings me to a… Christ, a death list? I mean, I guess all that ‘wipe the slate clean’ talk should have prepared me for something like that, but still… 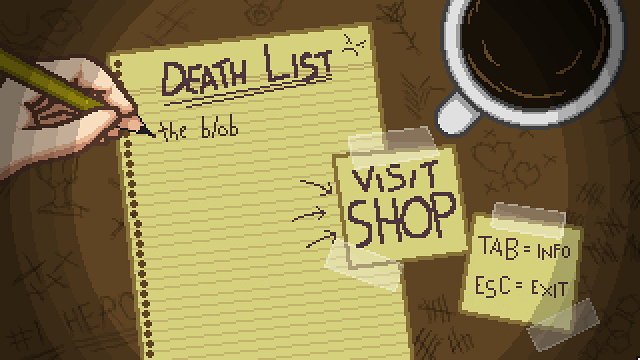 I guess I should be glad the list is so small.

I tab to gain some more information about ‘the blob’. Who is this creature, and why does it deserve to die? 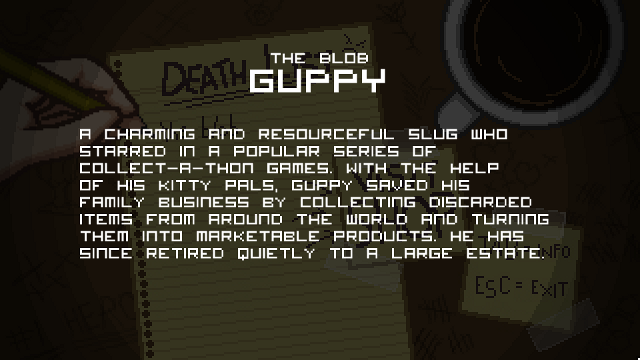 What a… what a monster?

Oh, it… it banded together with kittens in order to save a family business? That… I mean, I guess the whole ‘Hall of Heroes’ thing should have tipped me off here, warned me that these guys weren’t going to be the much-desired Triple Hitlers video games usually pit us against. Still, I can’t help but cast doubts on Pink-Haired Murder Girl’s plan here. She’s going to kill all the heroes, in order to… become the number 1 hero herself? Is that how she thinks the hero business works? Is that how the hero business works? Does this universe operate under Highlander rules?

I brusquely shove my moral reservations aside. Killing now, quandaries later. I select the Hard difficulty out of a list of four — so keep this in mind if I start complaining about this game’s difficulty later — and dive face-first into the fray. Guppy, your death approaches. 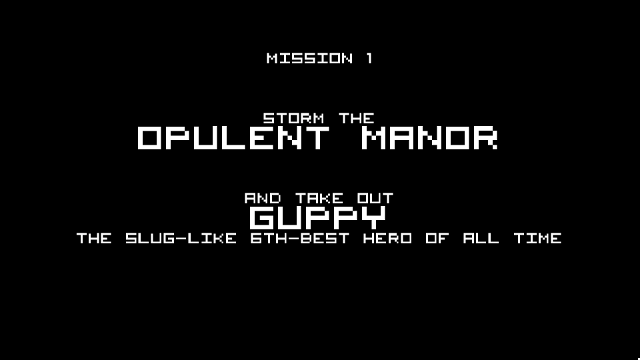 Guppy is wealthy? Clearly, he deserves to die.

Guppy, your death approaches. But first, let me learn how to walk! 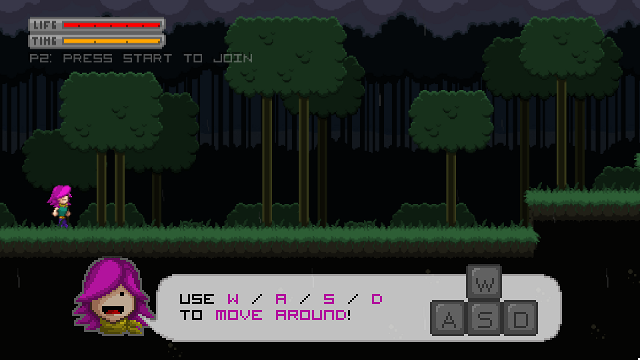 Not as much of a hardened killer as I was hoping, I guess.

WASD walks, spacebar jumps. I make full use of these newfound powers of mobility as I walk through a frankly gorgeous gloomy rainy forest. The trees seem to wink at me, as I pass, with their many faces. The darkness and the reserved vibrato electro-tune notwithstanding, the atmosphere is almost… nice.

Predictably, it can’t last. Inside the Opulent Manor, I find a cloud of one-eyed, one-winged, purple fly… blobs.

Pink-Haired Murder Girl looks absolutely delighted at the prospect of getting to murder them. 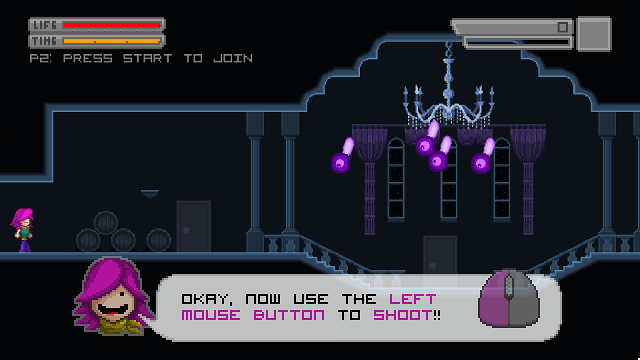 “Yay! The deaths of innocent creatures!”

Left Mouse button shoots! My guns! Shoots both of my guns! The purple blobs fly apart, as an endless stream of bullets follows my reticle. I can’t see if ammo is an issue in this game, I don’t know if it is, and I couldn’t care if you paid me. 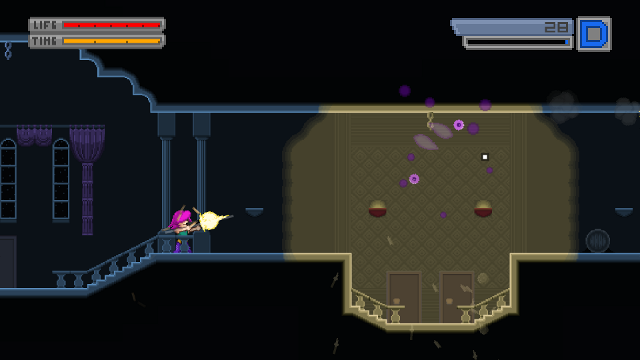 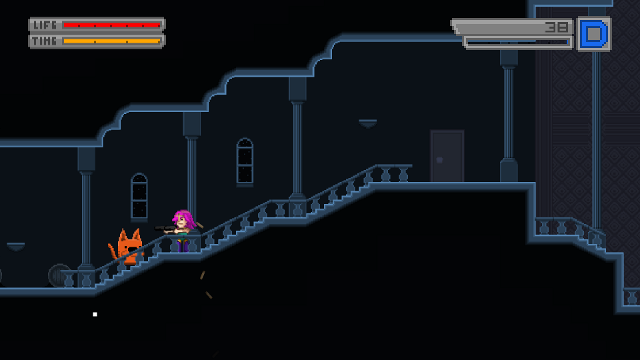 Stick ’em up, kitty cats. This is a… murder, actually.

The manor scrolls with me as I run, up until the point where it stops doing that, and I move into a new area. In this area, Pink-Haired Murder Girl suggests that I can use Q and E to switch weapons.

Wait, I have multiple weapons?

Well, as it turns out, I have one additional weapon. I switch to it without looking, fire it in the general direction of a cloud of blob flies, and find out to my delight that it’s a sweet rocket launcher. 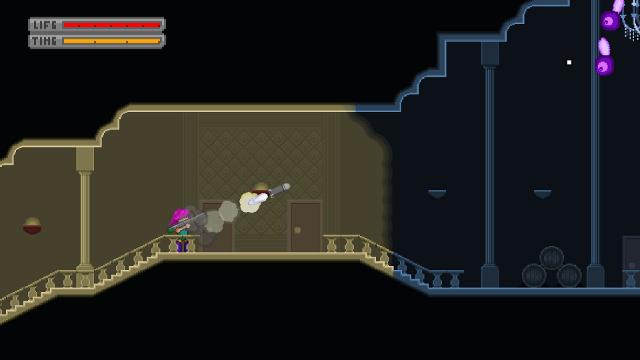 The sweet rocket was a dead giveaway.

And one screen over, I find out that the right mouse button can temporarily slow down time! Dude, excellent! The time slow affects me just as much as the enemies, but it does make it easier to navigate certain puzzles. Like the puzzle of the cat monster rhythmically vomiting up an endless stream of damaging hairballs, up until the point where I get it at an angle where my rocket connects to its feline face and it explodes. Professor Layton would be… well, probably horrified, from all the murder. But horror is a kind of pride.

It’s not until ten feet further that I run into my first real spot of trouble. Pink-Haired Murder Girl introduces her air-jumping ability, a triple-jump variant, that I should be able to steer with the WASD buttons. Aim with WASD, jump with Space, you get the idea, right? In theory, this should allow me to reach untold-of new heights and dodge enemy attacks at any time. 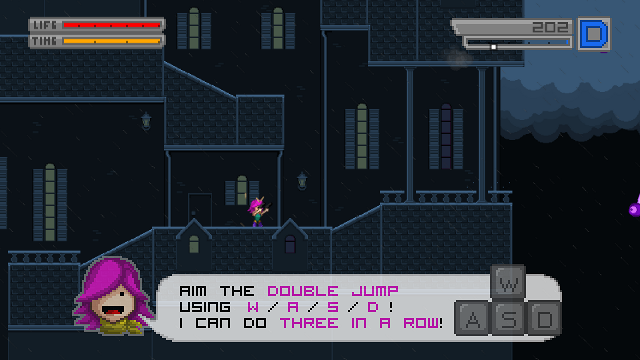 It’s not really a ‘double jump’ if you can do it three times in a row, dear. 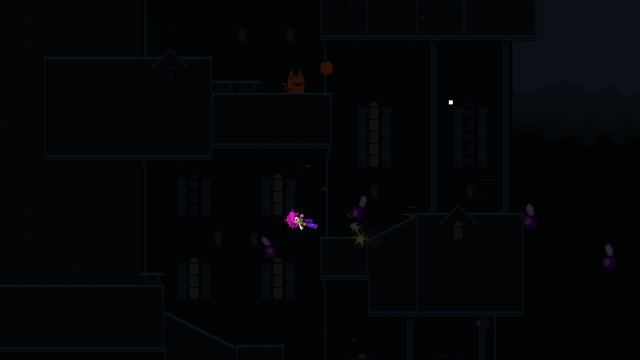 While I see the benefit of the triple jump in climbing this giant staircase of endlessly respawning purple blob flies, the system can’t help but feel… finicky, I guess? In practice, my jumps often peter out in a weird way… or I just into a direction that’s just a little bit off, or I jump into an enemy, or I jump into a wall, triggering some weird, unexplained wall-jumping sub-mechanic that saps my speed and my momentum. I think I’m supposed to feel like some sort of zig-zagging air-travel badass, but I mostly just feel like a klutz.

I keep trying to get the hang of the air jumping, but with little success. After the staircase with the endless flies, a room with Donkey Kong-esque barrel-rolling cats gives me no end of grief. And after that room, I find myself in a race to the top with an unkillable robo-helicopter. It’s a hard knock life, I tells ya. 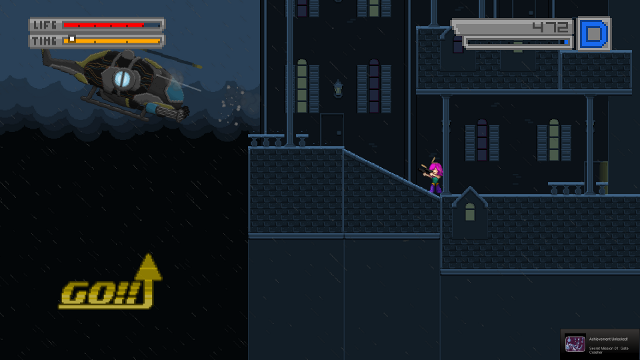 It has badass miniguns! And did I mention it’s functionally unkillable? 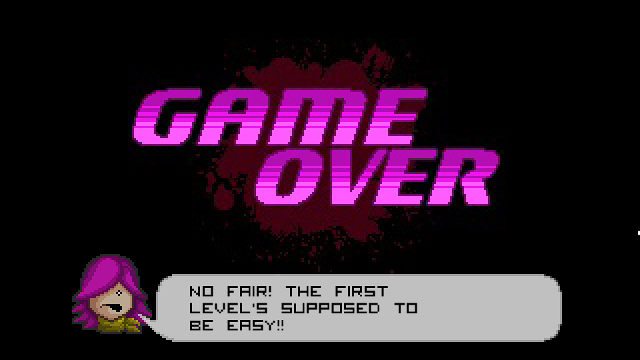 It’s not until my sixth or seventh failure at ascending without losing all my health — dying puts me back at the start of the most recent screen I entered, and while I can make it to the top okay, the ensuing actual fight with the helicopter just kills me — that I suddenly have an epiphany: this control scheme feels much more suited for a controller. The reason I suck at this triple-jumping is because I can’t seem to aim it right. But an analog stick should be much easier to wrap around that idea than the WASD buttons!

It proves a golden idea. A few minutes and a bit of re-playing later, I zig and zag past that annoying helicopter with nary a care in the world. 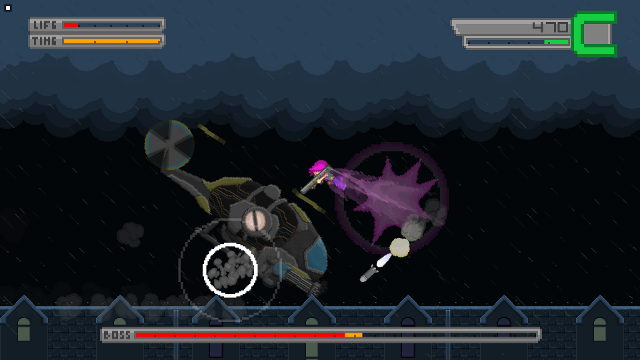 Leaving me free to take down Guppy. 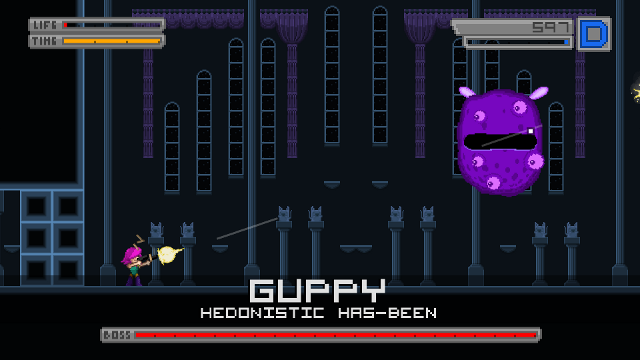 Guppy’s a tough cookie — slug, whatever — but not tough enough. He goes down like a sack of… a sack of slimy purple blob flies, I guess. 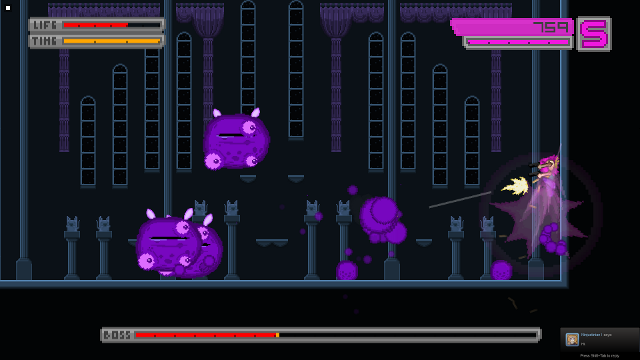 And with that, I win! One formerly sixth-best hero of the world, down for the count! And for the cleaning services.

Killing Guppy grants me 1100 Nondescript Points, which I’ll be able to use to buy upgrades and weapons in the shop, as well as access to the second boss: The Worms. An appealing description if there ever was one. Also, their backstory makes them out to be star-crossed sinuous lovers more than anything? But then again, I guess Guppy didn’t come off as such a bad guy either, and I killed him all the same. 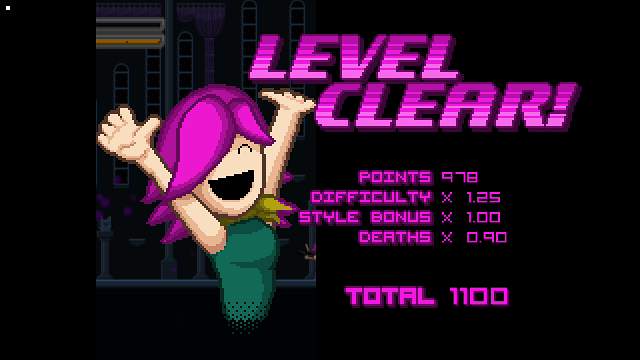 Be right back after I’m the number one hero in the world, or whatever.