Man. Factorio, the un-named three-man developer-created factory-building sim, is probably the single most requested game on Indie Wonderland since its inception: no less than two different people mused on my opinion on the Twittosphere. How could I not review it?

Now, as with last week’s 0RBITALIS, Factorio is technically an Early Access game: buying the game at current time gets you ‘alpha access’, with promise of ‘all updates’ after ‘official release’, you get the idea. However, where 0RBITALIS was clearly still in very early stages of development, Factorio appears to be… well, nearing completion, really. The current alpha is listed as version 0.9.8, it’s been in development for at least a year and a half, and the basic mechanical and gameplay conceits appear to be in place firmly enough that they probably won’t be drastically changed overnight. I’d almost say Factorio is in end-of-production beta stage, rather than anything that can be called ‘alpha’, if I wanted to be pedantic. But I don’t, so I won’t say that.

Because of how close to completion Factorio seems to, I’ve decided to forego my usual Early Access kid gloves. Hence, ‘Not *Quite* Early Access Land’: you get the critical eye and endless moping about inconsequential detail of a ‘regular’ Indie Wonderland this week, with the caveat that yes, technically speaking, Factorio isn’t finished yet.

Behind an online-account-login-screen, Factorio’s main menu is, er, sparse. Sparse, and grey. 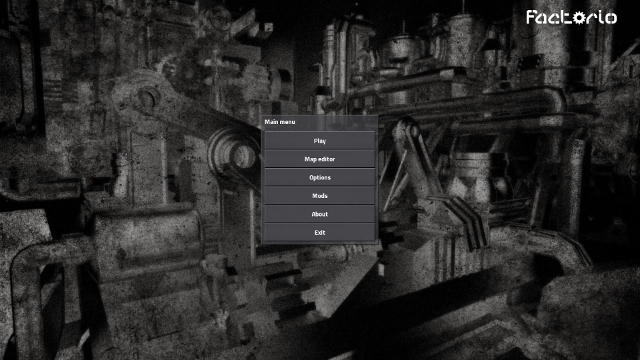 Or don’t call it *sparse*, call it ‘function-oriented’.

This scarcity of colour doesn’t extend to all parts of the initial Factorio experience, luckily: certain parts of the options screens have colours aplenty. Like Johnny Turbo Yellow! 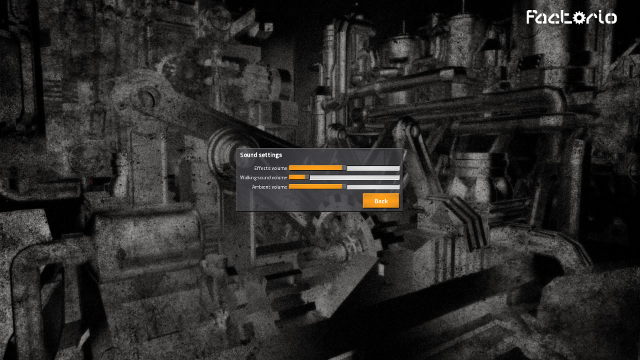 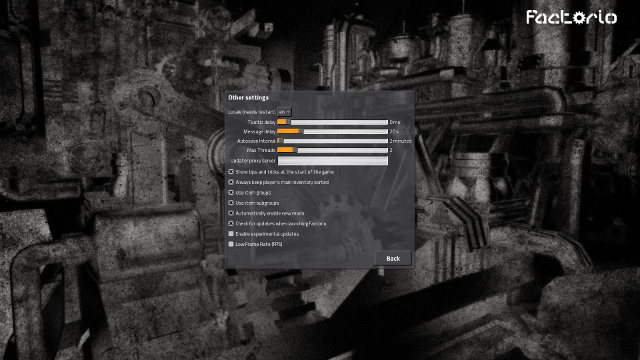 What are ‘other’ settings, anyway? Is this just the ‘we couldn’t figure out where to dump all these other options’ menu?

Or how about this cool piece of splash art, which is… 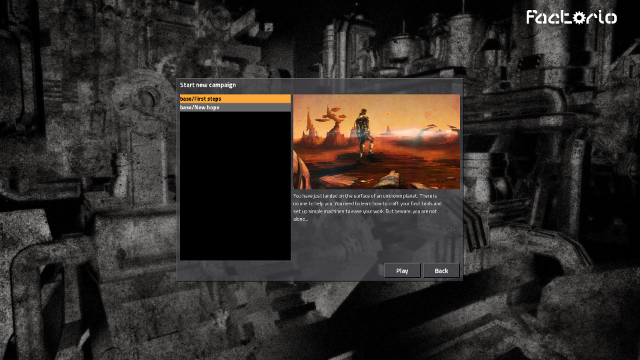 Yellow, with yellow, tinged with some yellow.

Alright, but for real: Factorio’s options are expansive, if occasionally a little oddly structured. The graphics options screen has a list of checkboxes for a large variety of detailed information, but no resolution options and no fine-grained settings beyond multisampling. The sound options screen has sliders for effects, ‘walking sound’ and ‘ambient’ volume, but… nothing for music? The controls options are varied and appropriately tabbed, but seem to bind some options to buttons I don’t think even exist: what’s Key60, again? And the ‘other’ settings mostly just confuse.

Beyond that: the About screen is more or less what you’d expect, and I have no desire to muck around with mods or a map editor for now. Let’s play!

Yeah, that’s what this screen actually was.

I don’t really remember, though. Like, in general, I’m incredibly scatterbrained, but also in the specific case of Factorio. I wouldn’t know how to play this game if you paid me to do it. Time to start from the basics: First Steps campaign, Level-01, Baby difficulty level*. Go!

(*Not actually a thing… as far as you know.)

First Steps campaign, Level-01, opens up on… a square 2D map of grass, trees and water. And colourful rocks. And a dude in a blue jumpsuit. And something that — I can’t easily make out what it is, but I can tell it looks all kinds of busted up. 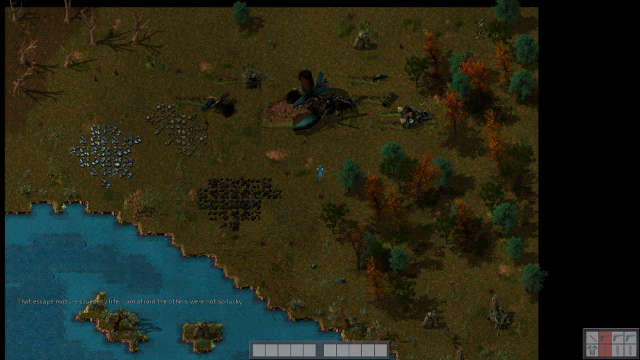 This garden is *not* about to win any neighbourhood prizes.

“That escape module saved my life. I am afraid the others were not so lucky…” reads a line of white text in the lower left corner. I assume it’s spoken by my character, but why does it appear all the way down there?

Almost immediately, an orange text bubble appears over my character. “This window will now and then PAUSE the game and give you some hints.” 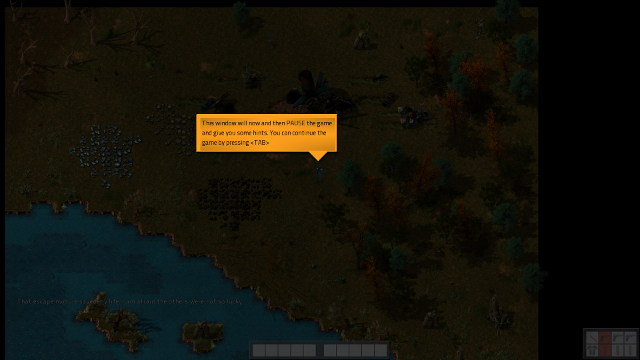 There wasn’t any reason to replicate that text, but here you go.

So… the text spoken by my character appears in the lower left, in a way and a manner I would associate with system text. And system text appears in a text balloon right over my character, making it look for all the world like spoken text. I’m… sure there’s a good reason for this, but I’ll be damned if I can figure out what that is.

After I deflate the orange word-balloon, Factorio stands still for a moment. I make use of this time to mouse around, looking at object descriptions that appear in the upper right corner. This is a ship wreckage. This is a character. This is a tree, containing this much wood. These black rocks are coal. These grey rocks are iron ore. These green rocks are… rocks, actually. 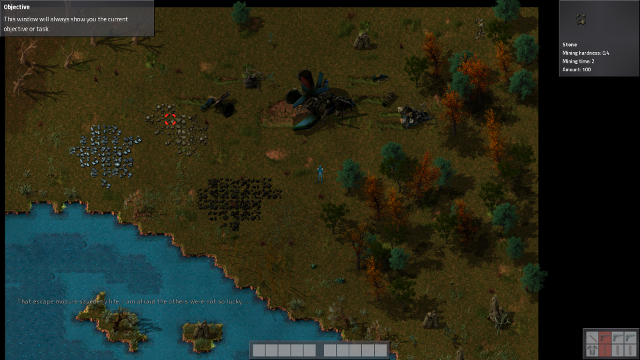 Hey, you know what they say about assuming.

I click around a few times, but nothing happens. Then I notice the upper-left objectives screen, and at its behest, use WASD to move my character around.

“Right click on the ship wreck to see if it has any cool swag!” I do so. “Hey, Iron Plates! Move those to your inventory by clicking and dragging!” I do so. 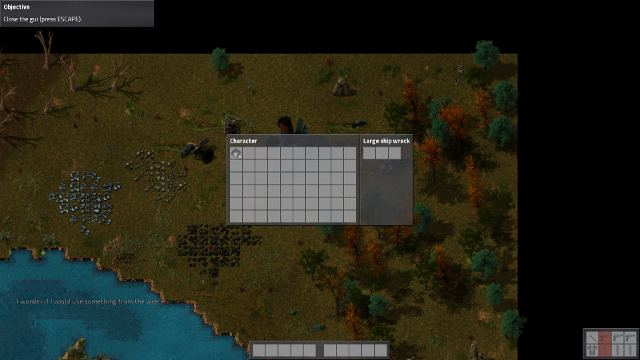 Why am I lugging this heavy stuff around, now?

“Now press E to open your inventory” — sure, I guess E works as well as any button — “and craft an Iron Axe, using Iron Plates and Iron Sticks!” 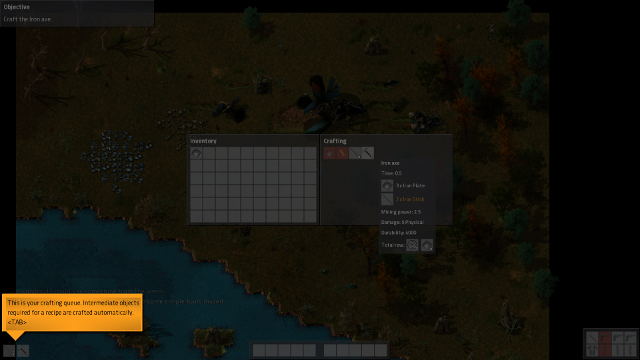 Axe in hand — it’s really more a pickaxe, but hey — I start mining iron ore. I don’t know why, but I feel… at ease, now, in Factorio. Like this simple act of resource gathering, which I’ve done in countless variations across countless game worlds, provides me with an immediate sense of understanding and prior experience. This is how it’s going to be, isn’t it? I, the player, will mine iron and coal and stone and wood under my own power, and then use those resources to build myself a shelter of some sort. I’ll probably build a furnace of some sort, and maybe a crafting table, and I’ll slowly get better tools and outfits… I can see where this is going, now, yeah. I got this. 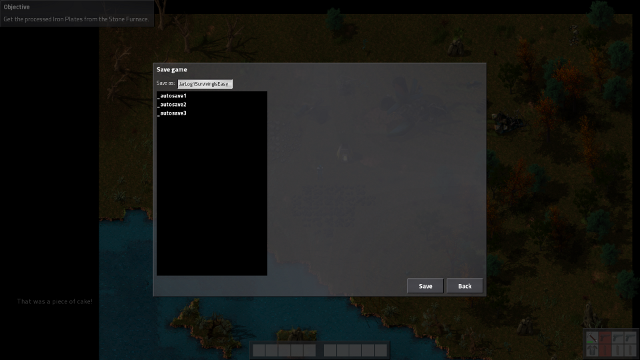 I quickly record my hubris for all to see.

“Alright”, Factorio chimes in. “Gathering resources like that is dull as shit, isn’t it? So why don’t you build an automated drill to help you speed up the process?” 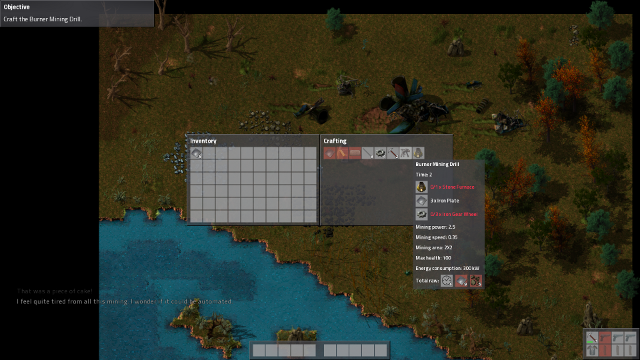 Alright, this is new and interesting. I build an… automated drill, like it tells me, from iron plates and gears and a stone furnace. I place it over a bed of coals, feed it a few starting coals to get it going, and watch as it starts pulling coal up from the ground for me.

Initially, it deposits two pieces of coal on the ground in front of it, then stops. The ground there ‘is full’. But then, at Factorio’s behest, I place a wooden chest in that spot… and the drill happily chugs on, slowly filling that chest will ill-gotten coal gains.

I stand around a little, still confused. Did… did I win? 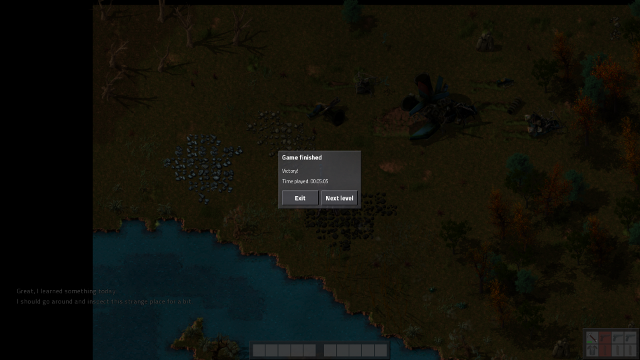 It turns out that I did.

Alright, so Factorio has already done a decent job of distinguishing itself from the Mines Craft and the Stars Bound of this world. Let’s see what else is on offer…

Level 02 opens on the remains of a mining outpost. It has deposits of iron, coal, stone, copper, and a robotic arm. 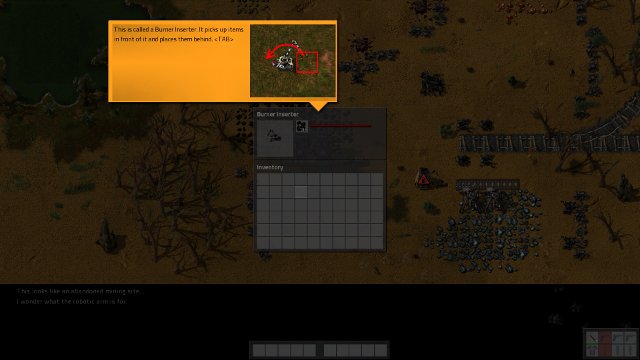 This abandoned outpost consists of several burner drills, adjacent to running conveyor belts, which are set to deliver raw materials to a pair of robotics arms. One arm is then set to feed iron ore into a furnace, while the other will drop coal into a chest.

I check out the chest. It has some coal in it. It also has a gun in it, and ammo. Why would I need a gun and ammo? 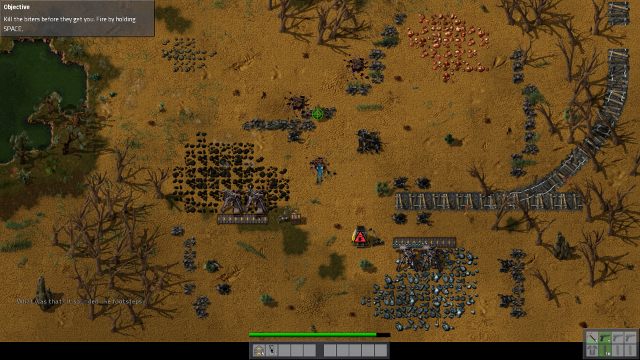 What do I do, what do I do!? I vaguely track the mouse cursor over the aliens and click, but nothing happens. By the time I notice that I’m supposed to hit Spacebar to shoot, the aliens have already taken a few bites out of my health bar. No wonder they call them Biters.

As my health rapidly regenerates, I set out to expand this base more. To smelt iron and coal, I need furnaces. To make furnaces, I need stone. Mining stone is slow and boring, so I should consider setting up another mining drill on the stone. But for that, I need iron plates. And to smelt iron…

I build, and build, and build. I get coal from my chests, and feed that into the mining drills and furnaces. I get iron plates and copper plates, and use those to build more of everything: drills, chests, conveyor belts. And occasionally get attacked by more aliens. 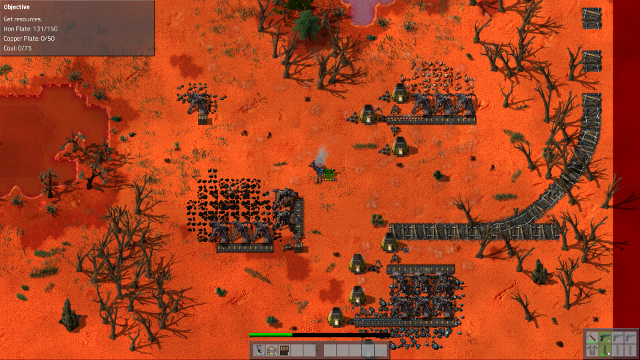 These aliens don’t have a whole lot going on, apparently.

Eventually, I obtain enough materials from my temporary outpost to move on. To level three, which holds… oh, only the secret to electrical power. 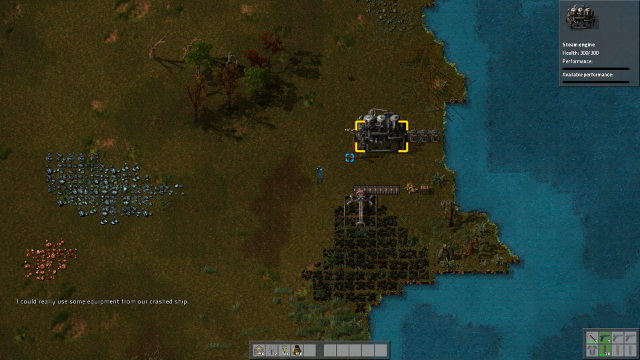 The power… it’s been in my hands all along!

By attaching a pump and boilers to a steam engine, I can generate electricity. Electrical power is then used to drive electrical mining drills, meaning my days of refilling coal are a thing of the past! Well, beyond the coal-driven boilers. But hey, baby steps.

With the not-inconsiderable power of Zeus at my fingertips, I quickly set up a small base of operations. I mine copper, iron and coal, and even automate the smelting process to a degree! Man, I feel clever about myself right now! 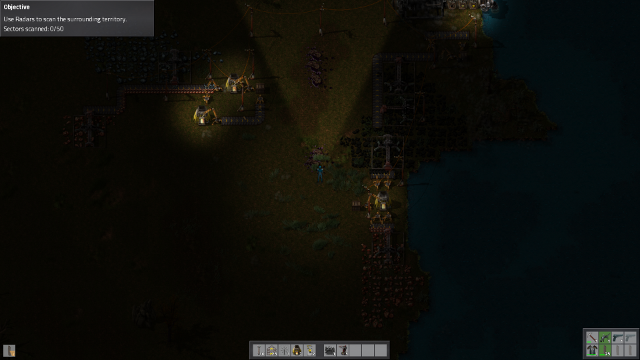 I’m like, *five* systems engineers. Taped to a city planner.

I build radars to scan the surrounding terrain, and automated gun turrets — not coal-driven — to keep the radars and me safe from angry angry aliens. 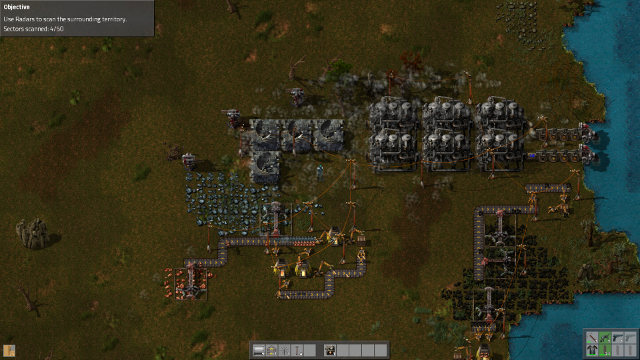 The gun turrets are not steam-powered, because that would just be weird. 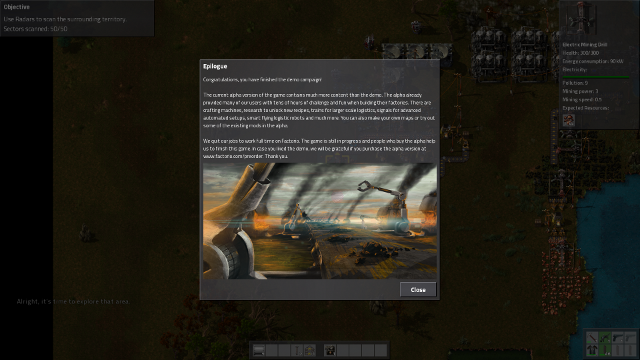 Call me premature, but I feel like I have a good measure of Factorio so far. Building small, semi-automated bases, defending against casual alien excursions, and completing simple objectives? I can totally do that?

It’s possible, I grant you, that later levels might become a little more complicated. But much more than what I’ve seen so far? I don’t know. I definitely wouldn’t imagine that, say, the very next level would take the same map I was on just now, and wrap it in a base layout that’s so marvelously high-scale and efficient that it would make my previous ‘outpost’ look like the laughable attempts of an idiot child at best. 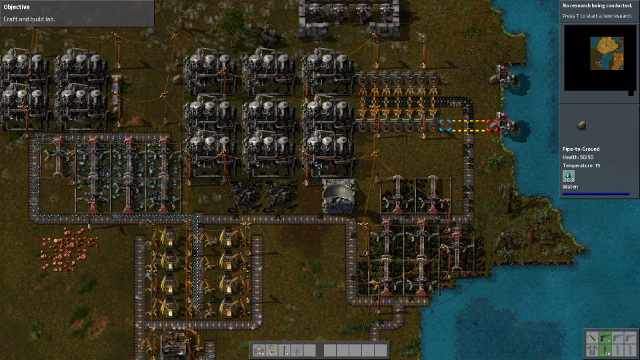 Nope, that would just be silly.

Now, if you’ll excuse me, I need to go… not feel bad about myself for a while.