Mark the day on your calendar, Indie Wonderland readers: today is the day I officially sold out. Because when I found myself interested in 0RBITALIS, the minimalistic gravity-based puzzle game by Alan Zucconi that has recently opened up to Early Access, what did I do? Did I pay the money and take the gamble like every other interested prospective player? No, I used my contacts in the games industry to get a copy for free.

Okay, maybe I do consider Ashton Raze to be more of an online friend than a ‘contact’. And maybe I didn’t so much ‘request a copy’ as that I made grumbling jokes about failing at a contest. Listen, it matters not: east is east and west is west and never the twain shall meet, and free games from industry insiders are free games from industry insiders and never again shall I regain my indie reviewing cred. I might as well go full sellout, then.

What, what… oh god, there’s a Mountain Dew can on my desk right now. I don’t… I don’t remember buying that? How long has it been here? Has it always been here? EAT DORIT-

But yeah, anyway: 0RBITALIS. As an fairly recent early access game, I will not review 0RBITALIS in traditional Indie Wonderland style. Rather, this write-up will be a bit of a first look. 0RBITALIS-as-it-currently-is, if you will.

0RBITALIS, as it currently is. If you will.

0RBITALIS is a game about the inevitability of entropy, and about how nothing man-made or man-planned can ever hope to tussle with the fundamental forces of existence for long without finding itself hopelessly outclassed sooner or later.

No, wait, that doesn’t sound quite right. Let me try again.

0RBITALIS is a game about how satellites are a bunch of major wusses. I mean, seriously: what kind of satellite worth a damn can’t smack into an asteroid at incredibly high speed without surviving in one way or another? And they get homesick too, believe it or not.

No, damnit, that’s not good either. Third time’s the…

0RBITALIS is a game about launching satellites into a solar system in such a way that it survives without either crashing or flying off too far. Each solar system is populated with one or more celestial bodies — stars, planets, asteroids — that have some kind and some measure of gravimetric influence. You, the player, can control the launch power and the starting path of your satellite, but once released, gravity takes over. Gravity, and fate. 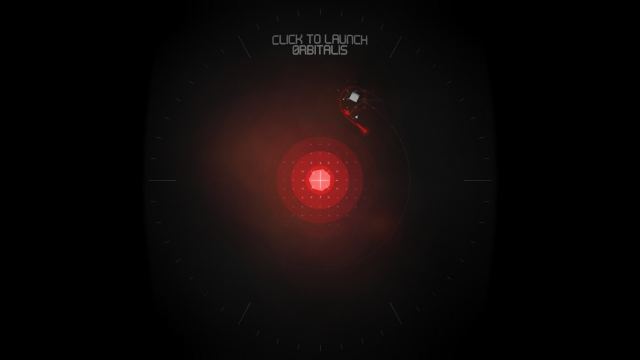 And fate is a bit of a fickle mistress.

0RBITALIS is a minimalistic game, both aesthetically and mechanically. Aesthetically… well, that screenshot you see up there captures the extend of 0RBITALIS’ graphical style pretty well. Celestial bodies are represented by geometric shapes, with size seemingly corresponding to number of faces: triangles are small, squares are larger, hexagons are larger still… 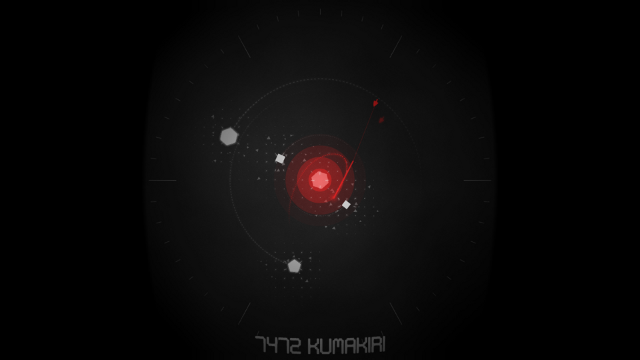 It honestly took me ten minutes to recall ‘pentagon’. I’m not entirely unashamed by this.

The red glow around certain objects initially seems to mark them out as stars. I had a brief moment where I thought that the red glow indicates gravitational pull… but it doesn’t, because the smaller, non-glowing objects possess gravity too. No, gravitational pull seems to be indicated by the visible vector-dots surrounding each object, representing their impact on space-time. I’m fairly certain.

So what does the red glow signify? So far, all I’ve been able to determine is that red-glow objects have traditional gravity, while (later) blue-glowing objects have… let’s call it ‘anti-gravity’. I’m sure you can figure out how that works. 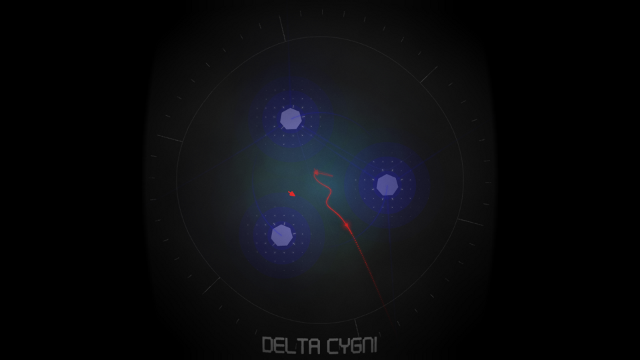 Anyway, that’s about the length of 0RBITALIS’ aesthetic: white geometrical objects, red and blue glows, dots and stripes, and the red triangle and tail-line representing your satellite and its path, respectively. A simple electronic instrumental tune underlies the whole thing, and that’s about it.

Mechanically, 0RBITALIS is equally uncomplicated. You, the player, have exactly one point of input during every level: the satellite’s launch. You control the satellite’s launch direction and its launch power, in a way that’ll feel intuitive if you’ve ever played virtual versions of golf or pool. Then you click, the satellite launches, and the whole thing’s out of your hands.

Every level has the same basic goal: keep the satellite in-flight and in-system for at least a certain amount of time. If your satellite either impacts another object or flies too far off-screen, the level ends. Flight time required is shown by way of a coloured circle around the system, that starts filling up as soon as the satellite launches. If it fills up before your inevitable crash, you win. If not…

If you do win, every level has a flight-time leaderboard you can aim for. The longer you manage to stay up, the better. 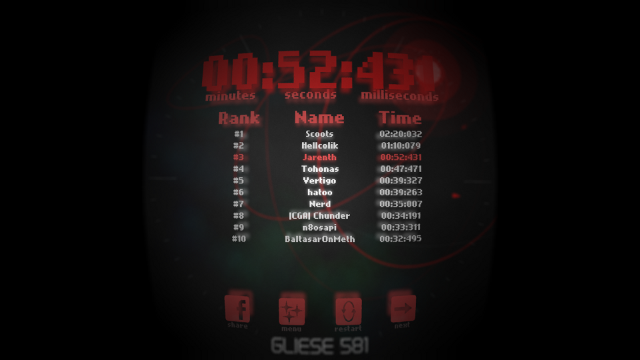 Third place in space? I’m okay with this.

Except when that rule doesn’t apply, I guess? I was never too sure on what happened here. 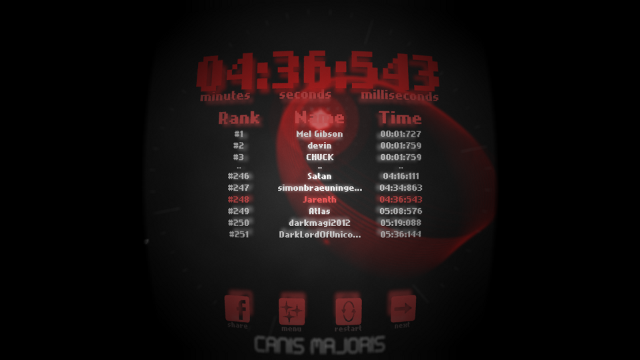 “You managed to make it four minutes? Boo, you suck. Way too long!”

As every level has different celestial objects, some stationary and some in orbit, the trick is always to determine that particular flight path that will play with the different interacting forces in such a way that you don’t explode or fly into dark space. Helping you with this is the satellite’s flight path line, which both shows you where you’re flown already and projects the satellite’s next few seconds of flight. The flight path line is essential in planning out your initial launch, and it can be useful in warning you a few seconds in advance that your run is going to fail horribly. 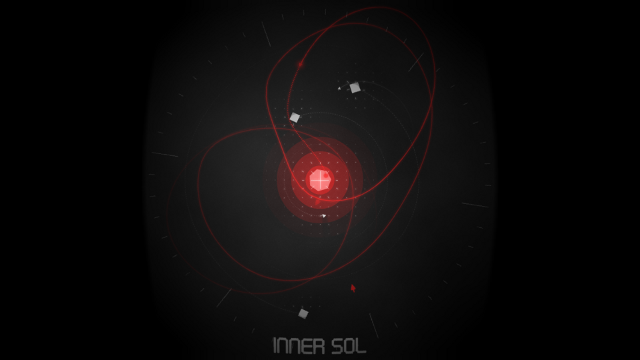 Unfortunately, the line’s predicting effects only extend a few seconds into the future. And with so many complex, moving parts in play in most levels, it quickly becomes almost impossible to intuit how your satellite is going to behave in the wild. 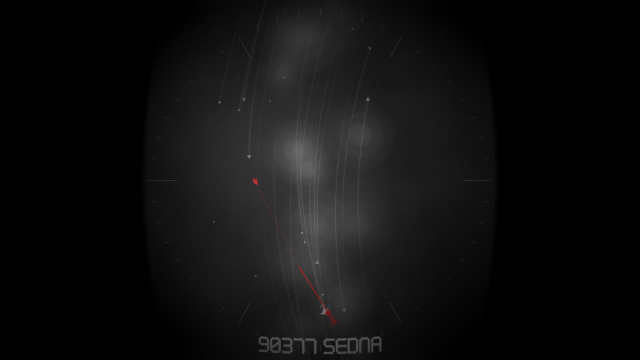 Yeah, let’s just go ahead and not launch right now.

Except when I put it like that, I give 0RBITALIS more precision-credit than it deserves. There is no pausing in 0RBITALIS: levels start out in full motion, including all celestial objects that move and your own satellite launching spot, if applicable. And your launch speed and direction are solely dependent on the location and distance of your mouse pointer in relation to your satellite at any given time. Which makes launching satellites the ‘correct’ way more of an art than a science, most of the time: you don’t ‘adjust’ your launch so much as that you try to recreate your previous launch as close as possible, except just different enough to enact different results. 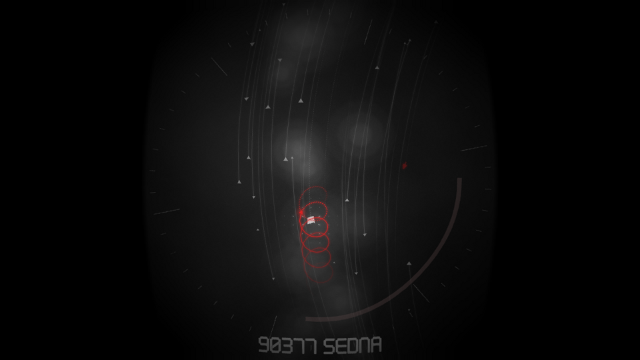 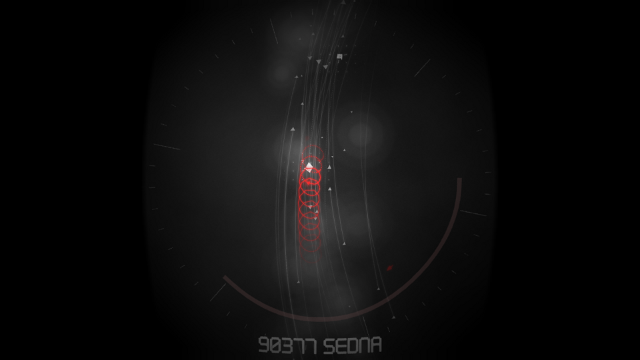 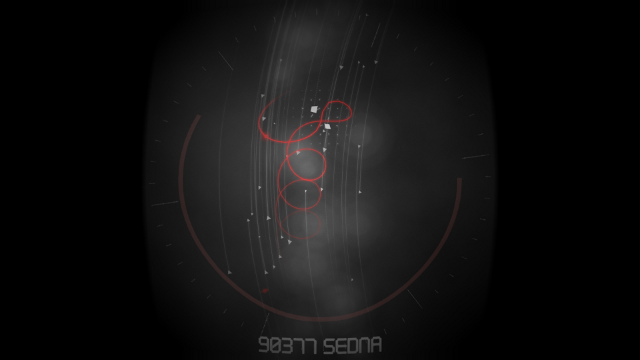 This, er… this is different. 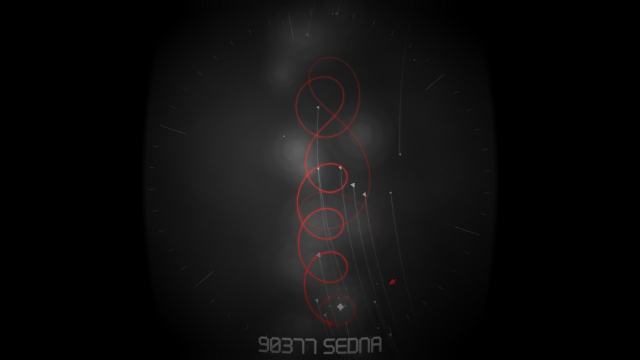 Consequently, I’m not entirely sold on 0RBITALIS’ central gameplay conceit. The idea of playing with gravity forces is interesting, but the almost intrinsic uncertainty inherent in the idea and the lack of precision from being unable to halt the action result in a game that’s less ‘puzzle’ and more ‘luck of the draw’. I’ve had levels where I couldn’t for the life of me figure out the correct solution concept to the puzzle at hand… until it suddenly clicked, or rather until I suddenly clicked correctly, and the satellite went from a three-second death-orbit to a record-breaking endless flight path. 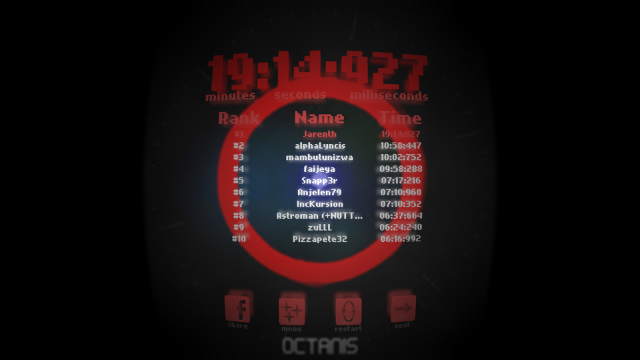 This is a decidedly non-humble brag.

There’s still a certain degree of planning involved in every level, of course. But my experience with 0RBITALIS is that the more difficult levels get later on, the more repeated trial-and-error gameplay is almost required to wrap your head around them. And 0RBITALIS does get more complicated over time, as any good puzzle game should: ‘normal’ gravity gives way to anti-gravity, gravity that flickers on and off, gravity that only seems to operate within certain borders…

They’re all concepts that have potential. But the way 0RBITALIS currently operates, I never feel like I solved the puzzles it puts before me. I feel like I bypassed them, nudging out a flight path that crashes only a fraction of a second after the clock circle fills out. 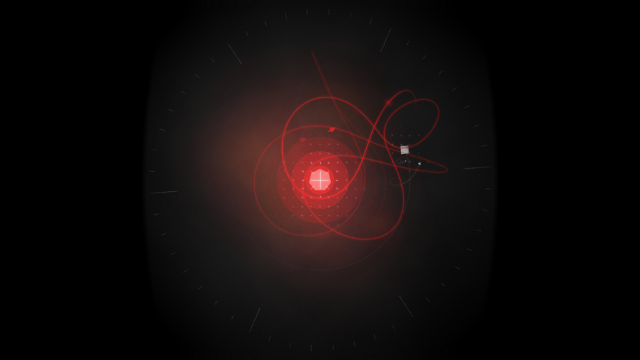 0RBITALIS’ flash-based nature incurs some additional performance problems: because the satellite’s past trail doesn’t seem to face, levels that run for too long start chugging significantly. That 19-minute score in the previous screenshot? My PC had to run for an hour and a half to get that far. And 0RBITALIS’ controls for getting into menus, for restarting and for exiting are obtuse at best: escape just gets you out of fullscreen-mode, for instance. But in an Early Access game, I’m more than willing to chalk these up to should-be-improved-upon nitpicks.

Whether or not the gameplay concept can be ‘improved upon’ enough for me to overcome my current reservations, though… I don’t know.

0RBITALIS can currently be picked up for six-or-so bucks on Steam. It’s not pricey, and given its Early Access nature, is only likely to get more interesting over time. If the gameplay I’ve put forward here seems at all interesting to you, you could do worse than picking it up. Just… understand that some level of frustration, in the later levels, is highly likely to come with the territory.