I managed to get all five 1_X collectibles! Look at how sweet I look. 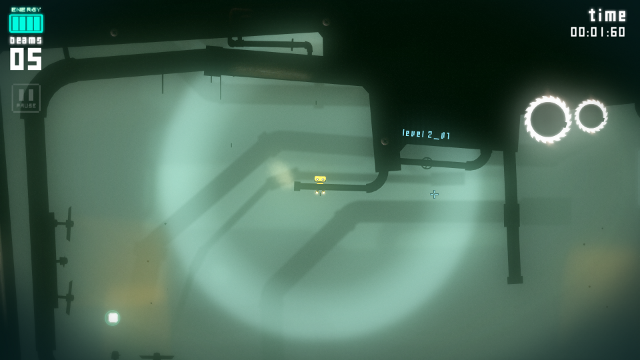 Yellow! The colour of *victory*.

Another interesting thing I did was… here, look at this old level layout screen again. 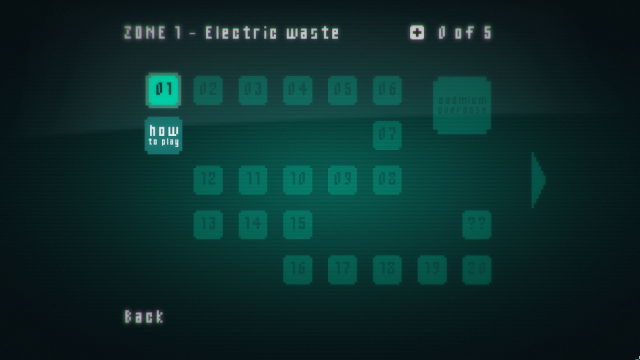 See that big square labeled ‘Cadmium Overdose’? After completing all the other levels — including beating the somewhat-poorly-named ‘boss level’ 1_21 — I noticed that that square was still dark blue and un-unlocked. So I did what any sane person would do: I went back to the previous levels and re-did them all in under-par times, reasoning that the ‘a’ trophies you get for completing levels in this way were probably somehow tied in to this big honking attention-grabber.

Good news: turns out they do! Bad news: turn out they unlock some weird, acid-trip bonus level that I still don’t know how to beat. 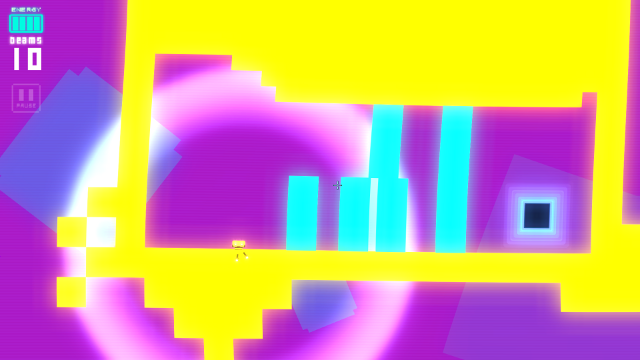 Undaunted, I continued on into the 2_X level set, ‘Toxic Waste’. I played a couple levels in that set. Then I ran into a level that aggravated me even more than all other previous levels had aggravated me, I put down my mouse and exited Volt, and I haven’t launched it since.

Okay, that’s a little out of the blue. Let me back up a little: Volt is a game with quite a few attractive aspects, like a good-looking minimalistic aesthetic and a somewhat-interesting physics-based gameplay style, that’s let down immensely by poor execution and frustrating design choices. Volt starts out fairly good at first, but already shortly after dipping into the more ‘advanced’ puzzles, it becomes clear that the parts of it that aggravate are almost certainly going to outshine the parts of it that entertain. 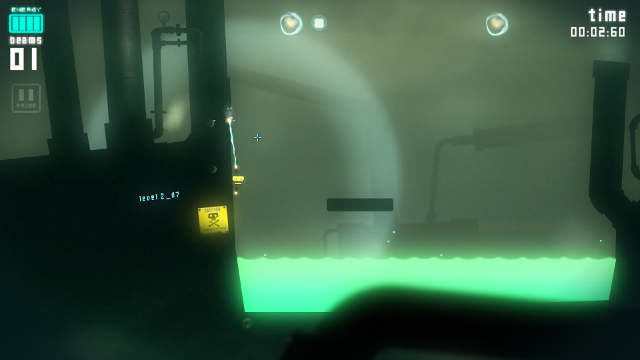 Because I dislike being mean to games like this without reservation, here’s another screenshot showing Volt being pretty.

Volt’s issues are one part theory versus practice, and one part poor design choices. And let’s tackle those two in that order, more or less… they might mesh together a bit. I can’t make any promises.

In theory, Volt’s primary gameplay mechanic isn’t half bad. You’re a battery, with arms and eyes somehow but hey, so you can’t really move around under your own volition. Your only direct move is the jump, but that drains vital energy. Instead, you move with the help of your electrical beams: swinging, attaching through platforms, operating buttons and levers, and generally making use of physics in order to get from point A to point B.

It works fine in theory, and to be completely fair, it works fine in practice a lot of the time too. Particularly in the slower-paced levels, Volt’s strengths are played to well: careful planning, avoiding hazards, placing beams and timing jumps, and making your way through a level that seems hell-bent on reducing you to scrap.

The slower-paced levels also tend to play to Volt’s puzzle elements the most, which is probably why they tend to work a little better. If you start with three beams, and the nearest ball of beam energy is that way… you can swing like this, and like this, and then you should be able to get close enough to draw it in. But wait! The optional collectible is actually down there, under some buzzsaws and electrical ceilings! How are you going to get that on three beams? Or maybe… 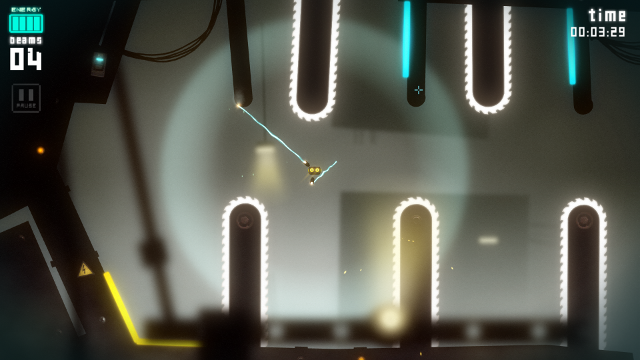 Slow and steady gets me not torn apart by chainsaws.

But the notion of ‘slower-paced levels’ implies the presence of ‘faster-paced levels’, aimed more at quick thinking and twitch reflexes than at careful planning and deliberation. As Volt shines at the latter, it dulls quite a bit at the former.

One part of it is that Volt’s controls just aren’t very tight, most of the time. A game with physics-based swinging as its main mechanic should be incredibly precise in allowing the player to sever old connections and place new beams, and Volt just kind of… isn’t? The notion of swiping your mouse across beams to cut them is an intrinsically immediate one, and one that probably works a lot better on touchscreen devices. But on a PC, it’s also slow, unwieldy and imprecise. Sometimes you’ll have two beams in close proximity, and you’ll want to cut only one. Good luck! Sometimes you’ll draw a cutting motion, release, and then notice that your motion was too short to be picked up by Volt’s arcane determinacy engine. And now you got zapped by the electrical charge you were trying to cut. Whoops! 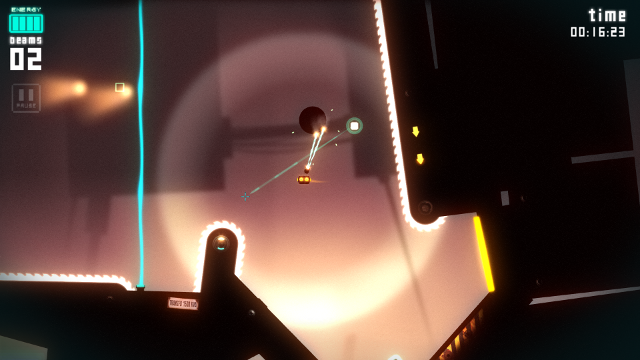 As far as I can tell, there’s no way to cut just one beam.

And the fact that beams ‘refocus’ is confusing more often than not. The idea is that, if your electrical beams cross a corner or intersect an object, they take the new surface or object as their place of origin instead. It’s not a bad mechanic, per se, but it has lead to countless confused deaths on my end as my beam was suddenly cut short. Or when a beam was suddenly much more elastic than I anticipated at first.

But really, Volt’s biggest problem in this area is its lack of precision. 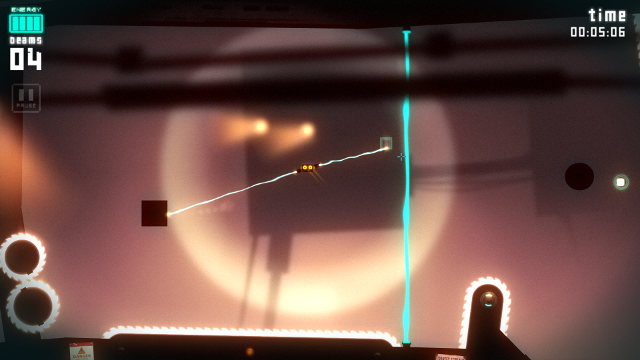 A very uncomfortable-looking situation for our intrepid charger!

You see the collectible at the right edge of the screen, yes? The idea for this level is that you start attached to the little green square, and that the black square is moving left and right. Attaching a beam to that block means it gets stretched out to the breaking point, dragging you with it… at which point it snaps, or you break it manually, and the resulting backlash launches you across the screen. Where you can then place another beam on the circle, and use the momentum to swing up and get the collectible.

Simple in theory. In practice, I had to try this section so many times.

There’s so much that can go wrong here. And crucially, none of it is under your control. Sometimes you get launched way too low, and way too high, and you miss the attachment point by a mile. Sometimes your jump just peters out, and you fall straight into the buzzsaws. Sometimes you do get launched just right, but the combination of your new beam and your momentum create a swing that’s either not high enough, or not in the right path to get the collectible.

And in all examples, at that point, you’re shit out of luck. If you want to get the collectible, you get to press R — or jump into the saws — and start over.

I see puzzle-based videogames like Volt as sets of skill mastery challenges at heart. The puzzle placed before you intends to test your understanding of a certain skill, or set of skills, or principle. In this case, you are tested on your understanding of electrical beam elasticity and the conservation of momentum. Fair enough, I say: I studied, I understand the ideas, I can win this.

Except that even if you understand what you need to do, you can still lose randomly. Your success or failure at this puzzle is not determined by your understanding of the challenge and your mastery of the skills, but by the fickle gods of fate, karma, and the RNG. And let me tell you: those gods are a right bunch of jerkhats sometimes.

To present another example: 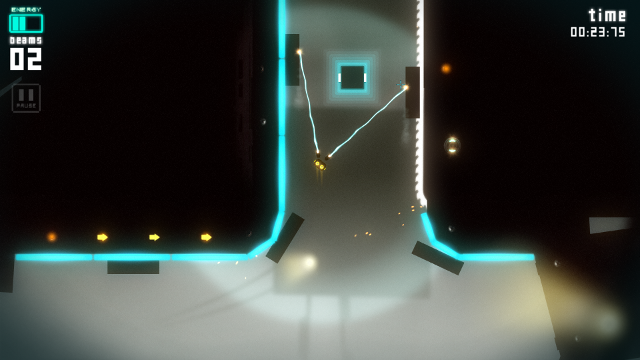 I did everything right, and I’m still set to fail.

Volt’s puzzles have an element of randomness to them that doesn’t mesh well with the rest of the game’s controls, design, and overall perceived intent. Losing a puzzle because you don’t understand it is one thing, but losing a puzzle over and over because your battery zagged where it really should have zigged is only frustrating. And it’s even more frustrating that this happens so often. 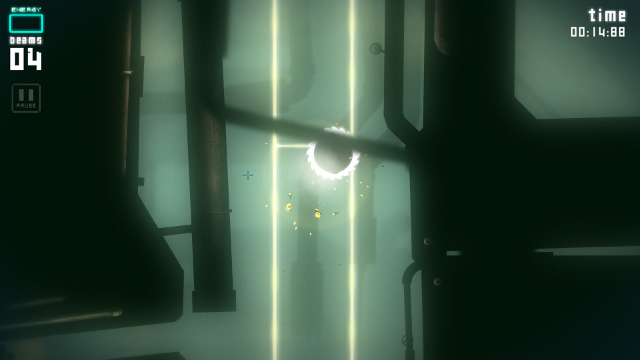 Volt has a number of puzzles and obstacles that I can only really describe with the Shamus Young-ism Do It Again, Stupid. Tricks and gotchas that you can’t possible see coming until you swing into them, face-first. Hey, triggering this button causes the floor to drop you into acid. Hey, if you fall down here from the left instead of the right, you eat a buzzsaw! Hey, if you drop onto this platform instead of the other platform, you’re dead forever and there’s nothing you can do about it! 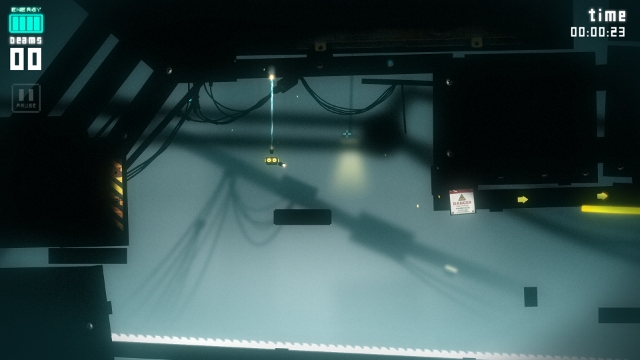 ‘Which platform’, you ask? Exactly!

DIAS deaths are not clever game design. DIAS elements are contrived, arbitrary gameplay time extensions, trading on the player’s willingness to proceed even in the face of the designer more or less laughing at them. And, thankfully, DIAS elements are rare in Volt… but they’re definitely there. And every time I ran into one of them, I felt my desire to keep playing drain just a tiny bit more.

Oh, and have I mentioned that Volt has no in-level checkpoints? At all? Even in the larger, more expansive levels, that can often take up to several minutes of twitchy imprecise platforming gameplay to beat?

The whole thing came to a head for me in level 2_11, which is this level: 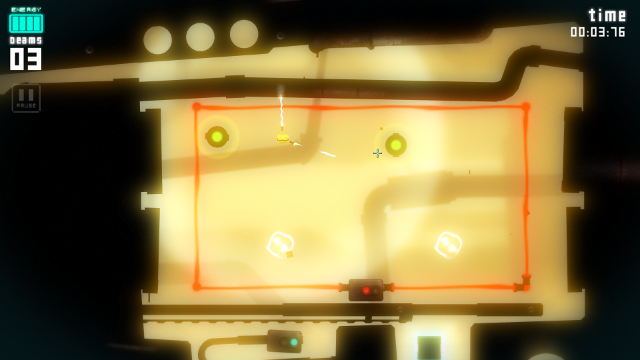 Again: fairly colourful and neat! Also, I loathe it forever.

You hang in a box guarded by deadly lasers. An infinite number of enemies spawn from the sides, intent on pushing you into said lasers. If one of them crosses the beam holding you up, you fall. You can kill them with your beams, but you have little starting ammo. Your goals, then, are to get the beam ammo hanging just below you, then trigger the switch which slowly moves the floor, allowing you to shoot the other switch, which disables the lasers and opens the way to the exit. All while fighting an endless supply of baddies that can instantly kill you if you don’t react quickly enough.

I got close, once. I’d gotten the ammo, I’d flipped the switch, I’d waited out the floor, I’d flipped the other switch. I was there, home free. And just as I swung towards the exit, a surprise enemy gave me a little nudge… and instead of the exit, I ended up on the floor next to it. With nothing to attach to and swing, and no way to translate my three remaining jumps into the movement I needed to get to the exit not ten pixels away from me.

I quit Volt, at that point. I felt it justified.

Volt is a game that is… not bad, per se, but lacking. It applies its otherwise interesting gameplay mechanics in poor ways, creating a game that is more a lesson in the inherent unfairness of a non-deterministic universe than a game about swinging a little from place to place. It looks good and sounds okay, but imprecise controls and a level design focus that seems to emphasize its weaknesses over its strengths leave Volt somewhat hard to recommend.

On the other hand, Volt is like five bucks on Steam. Less right now, for another… hour or so, after this review goes up? Well, that’s well-timed on my end. Point being: it’s not a major investment, so if you find yourself at all interested by the images and by my story, buying Volt will only set you back about one Big Mac at the worst. Which is also probably healthier for you in the long run, so hey.

But even saying that, I can’t help but feel like I could really go for a Big Mac instead of playing Volt some more. Make of that what you will.