You know… I was going to write a serious review about Goat Simulator, I really was. Sure, Coffee Stain Studio‘s inexplicably farm-animal-themed simulator game seems, in all aspects, to be a straight continuation of the theme started by this one weird Farm Simulator 2013 fan video. But like Farm Simulator 2013, it’s entirely possible that there is an actual game, living up to the given title, under over that overlaid-dubstep-nonsense-jokes madness. That Goat Simulator is, in fact, a game that accurately simulates the daily experience of being a goat, and that the aggressively silly marketing campaign was just having fun with the referential concept a little. That’s not unreasonable at all to assume, is it?

Goat Simulator starts off innocently enough. The loading screen is actually a simple controls overview, which I think is pretty neat. And the controls are given seem entirely consistent with the proposed Goat Experience. Walking around, jumping, headbutting, those are things goats do, right? And… rotating in mid-air, apparently. It’s possible! I don’t know goats. 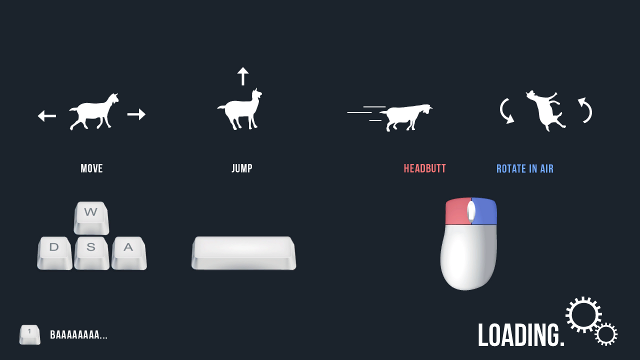 An alternate loading screen includes a button for licking things, which is something goats also do.

The main menu, set against the backdrop of a camera sweeping through a small farming village, is perfectly nice and serviceable. It looks nice, clean and well-designed, and it has everything you’d expect a main menu to have: options, achievements, credits, various methods of game-starting, access to a level creator, the works. 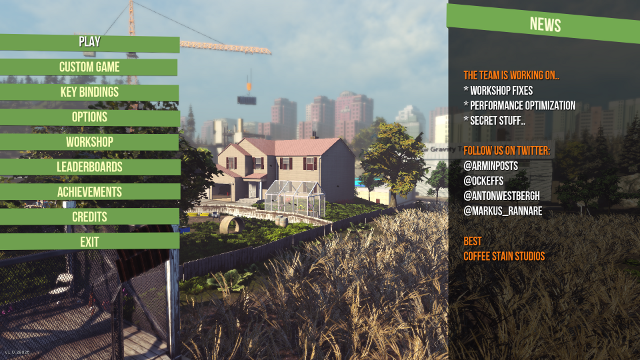 The options are actually fairly comprehensive, putting several larger-budget titles to a certain degree of shame. Rebindable keys, functional audio sliders, fine-grained details and MSAA settings… Goat Simulator even has an FOV slider. I remember having to dig into Crysis 2’s guts to get a non-awful FOV. 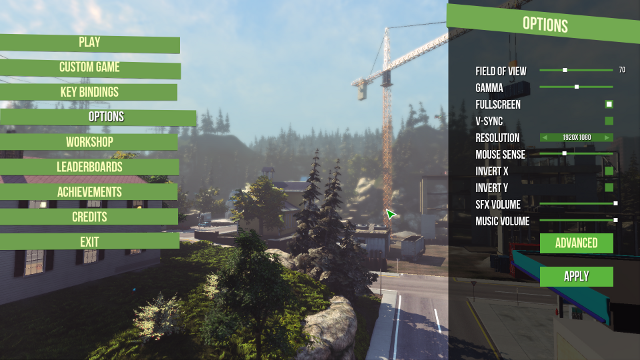 And actually starting a game of Goat Simulator brings you to this screen, which is more or less exactly what I expected from a game called Goat Simulator. 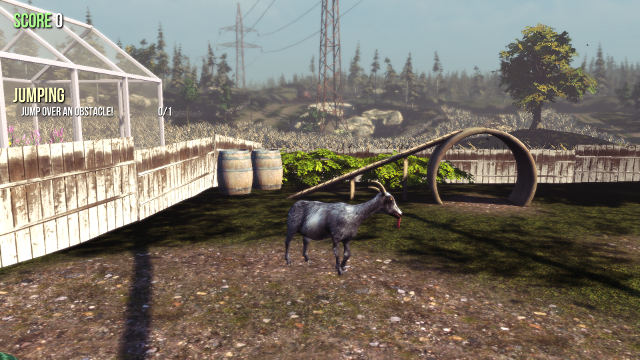 Hey, a goat! It’s simulated, though!

What do you do, once inside Goat Simulator? I don’t know! That’s up to you.

Maybe you’ll move your goat around a little. Goats move, right? Granted, Goat Simulator’s goat handles a little like a small goat-shaped tank, what with its oddly unwieldy turning circle. But then again, maybe goats work like that? I honestly don’t know, here: I’m assuming the fine folks at Coffee Stain Studios researched Actual Goat Behaviour a lot more than I have, at this point in time. 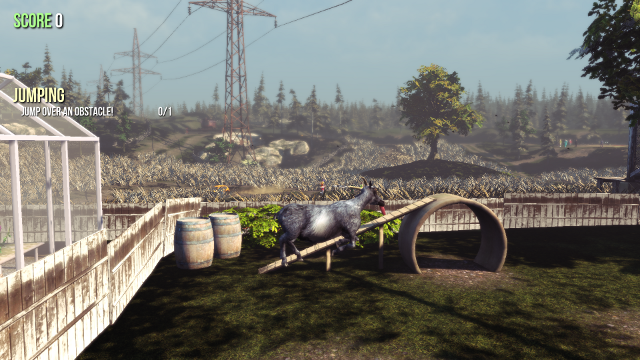 Well, according to Goat Simulator, they do. ‘Jumping’, your first objective reads, ‘jump over an obstacle’. And hey, look: there’s a metal bar suspended on crates just before you. Maybe… maybe you could jump over that? That could be a thing goats do, right?

You jump over the metal bar. Objective complete! You receive 1 x 10 points! 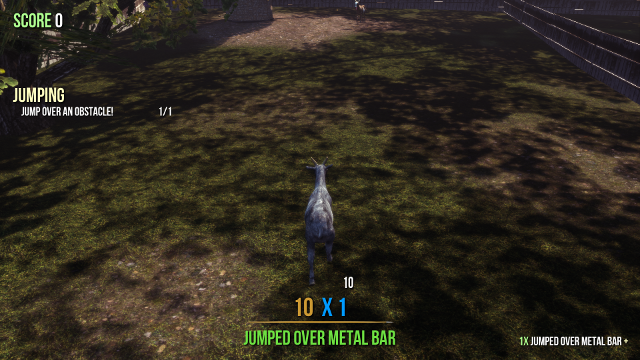 Yes, points! My life has meaning!

A new objective appears. ‘Airheight Easy: Reach for the clouds, 0m/5m’. Okay, so you need to get five meters from the ground. That’s going to be difficult in this goat enclosure, maybe. So maybe you’ll make your goat search for higher ground. We’ve seen in that earlier video that goats are totally comfortable all up in the mountains, so there’s definitely a case to be made for goats searching for higher grounds. Off you go!

…except there’s a fence around the entire goat enclosure. Hmm… what is it that goats do to fences, again? 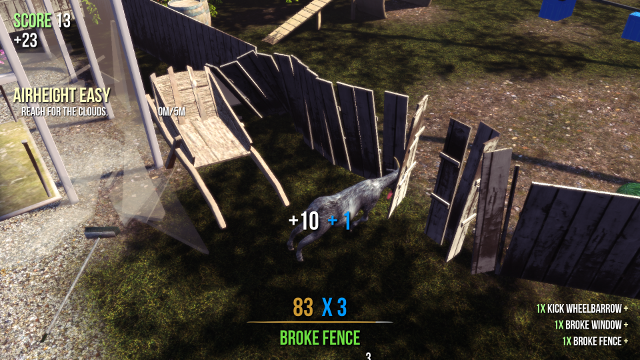 Maybe you’ll find yourself in a nearby house, staring down unflinching humans that refuse to acknowledge you. Frustrated, you’ll headbutt them for attention, only to have their ragdolls go limp as loud yelling noises play. You may also trash the rest of the house on purpose… or by accident. 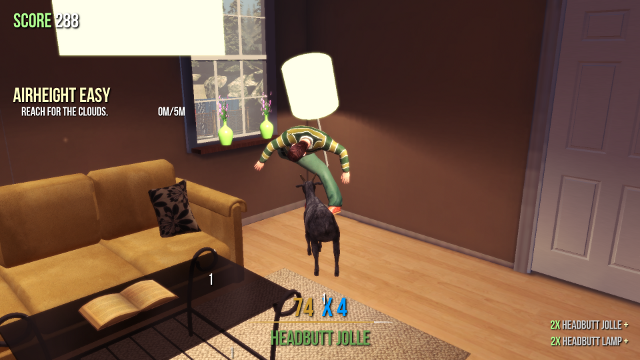 “It looked at me funny.”

Maybe you’ll make your way to the roof of a shack, where the air conditioning units have their intake fans. Except these fans don’t take in air, they expel air. And if you jump onto one of them, you’ll be catapulted several dozen meters into the air, bleating all the way.

“This is terrible and/or amaziiiiiii-“

Maybe you’ll make it onto a nearby power line. Maybe you won’t. It doesn’t matter, anyway: Goat Simulator’s goat has perfected the art of going limp on high impact, and is more than capable of surviving falls and collisions at any speed. 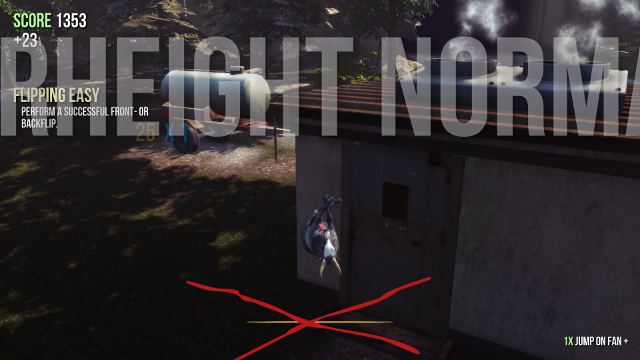 “Falling to my death? Ain’t no thing.”

Maybe you’ll climb a nearby high-rise crane, stopping only to lock eyes with the world’s most circuitous hang-glider. 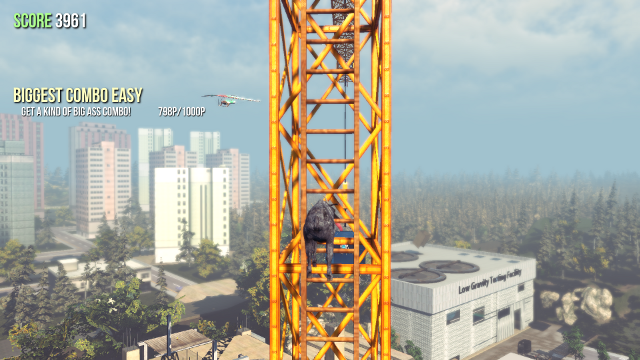 Seriously, why *is* that guy just gliding around in circles? 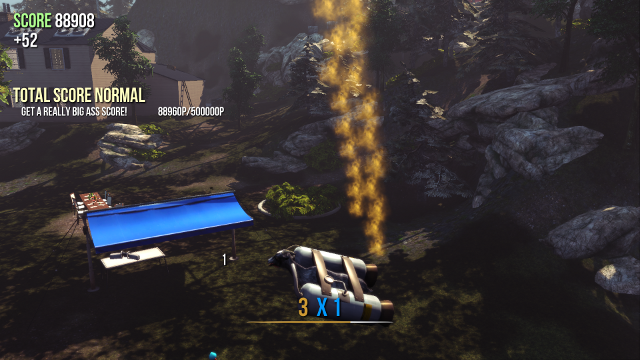 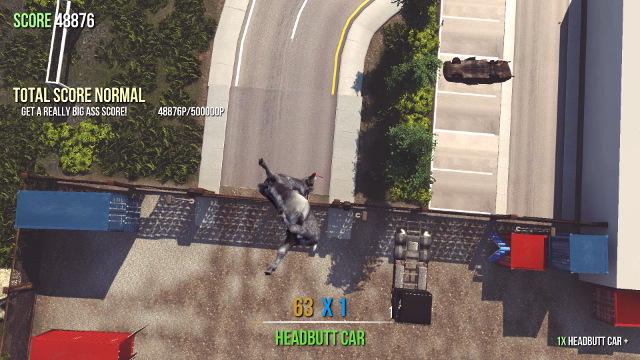 Because how *else* would you do these things? 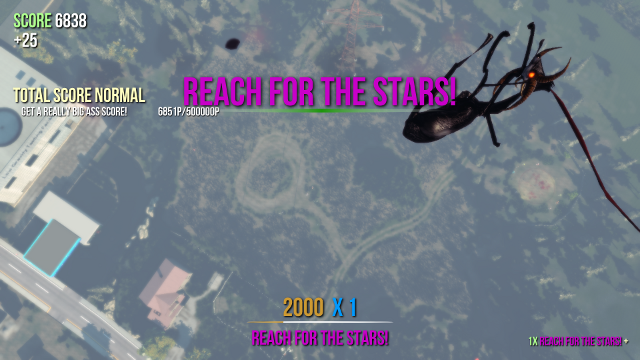 It’s not a pretty sight.

Or an angel goat! 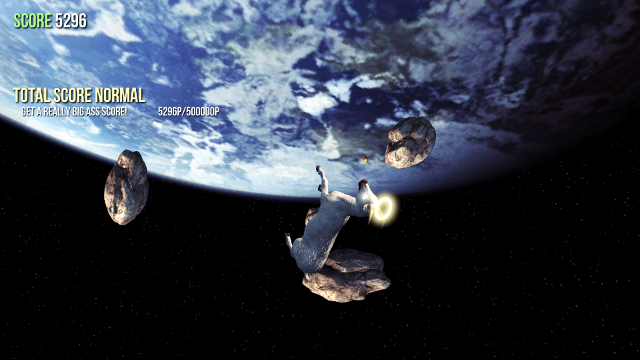 In space, of course.

Or Queen Goat, Ruler of Goats, with the power to summon her servants to her at the press of a button. 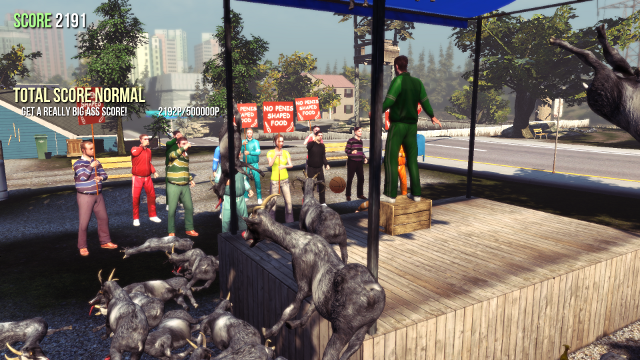 They fall out of the sky, and they’re technically *dead*. But Queen Goat cannot be bothered by these technicalities.

And so on, and so forth, und so weiter. There are a lot of things you can do in Goat Simulator. Not all of them seem equally goat-like, but then again, what do I know? Not a whole lot about goats, that’s what I know. We’ve established this before. Maybe goats do hijack jetpacks to ramp them off exploding cars all the time. Maybe that’s why we never see any jetpacks around! Think about it.

“But Jarenth“, you might ask at this point, “that’s all well and good, a wide variety of seemingly nonsensical options involving headbutting exploding things and dragging stuff around with your sticky infinite-length goat tongue. That all sounds rad, but also weird, but also weirdly rad. But what you haven’t told us yet is why we’re doing all of this. What’s Goat Simulator’s eventual long-term goal?”

Well, dear readers, to that I say… first of all, how’d you find out about the tongue? I haven’t even mentioned its amazing prehensile properties yet. Did you… did you know? 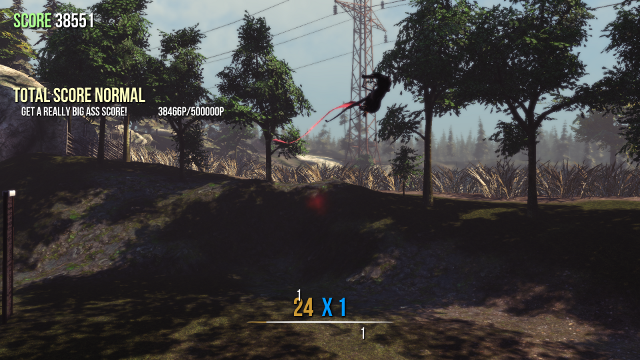 Do you also wish you didn’t know?

But to actually answer your hypothetical question: the reason you’re doing all of these weirdly rad things in Goat Simulator is because why the hell not.

At the end of the day, and there’s no bleating my way around this one, Goat Simulator is exactly the weird, nonsensical joke game it’s constantly portrayed itself as being. There are no deeper layers of meaning here, no carefully interwoven gameplay systems, no challenge, no structure, no attempts to create anything with any sort of deeper relevance. It’s just you, the player-goat, in a sandbox with a bunch of toys, a bunch of walking ragdolls, and a bunch of things that explode when you headbutt them.

Consequently, Goat Simulator is not exactly a game I see as having a lot of longevity. First time playing, you’ll probably run around in something approximating amazement — depending on how sensitive you are to being flabbergasted — doing odd things and finding secrets and just marveling at the fact a game this weird and broken and nonsensical and insane somehow manages to still be largely functional and fun. Second time playing, you’ll probably start hunting for the more obscure secrets, possibly using Steam guides or videos to find the Sanctum Statues, the Goat Henge, the alien beacon… still a lot of fun, if you’re into that sort of thing, but at that point the initial magic has already started to fade a little. 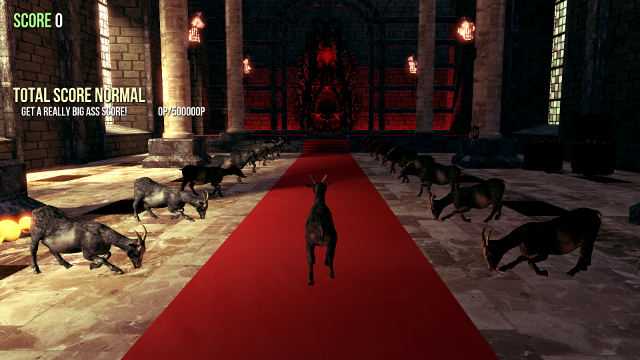 While Goat Simulator promises a lot of moddability from the outset, I’m doubtful about its long-term potential. Still, vibrant modding communities spring up around any game, and I’d be lying if I said I didn’t believe the right people can’t craft whole new layers of gameplay and fun onto the existing Goat Simulator framework. 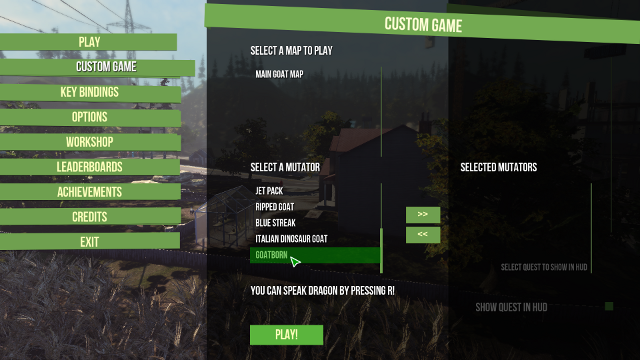 But at the end of the day, Goat Simulator is not a particularly long-lasting game.

It’s not meant to be, obviously. It’s a joke, a silly labour of love, a howling maelstrom of pop culture references and weird jokes and bugs that don’t so much ‘break’ the experience as form an integral part of it. It’s almost a water cooler game, in that the best things coming out of playing Goat Simulator will likely be the stories you tell about it. ‘So there my goat was… head stuck in its own satanic psionic power, catapulting itself all across the map… and that’s when I crashed into the gas station.’

As for me: my favourite Goat Simulator moment came when I used an exploding car to get myself to the top of the Low Gravity center. Yes, I know there are ‘better’ ways of getting up there, but I enjoy the anti-Darwinian stupidity of explosion-travel, okay? Anyway: the Low Gravity hosts a few giant swirling steel beam-fans… one of which is guarding a golden goat trophy.

Obviously, I must have it.

I jump my goat in… misjudge the timing, and a steel beam smacks her straight off the roof… and I somehow get catapulted past every end-of-level invisible wall. And once the ragdoll wears off, I find myself in an uncompleted region of Generic Virtual Forest Environment, all repeated tile sets and low-poly tree textures that look better from far off. A part of the map where No Goat Was Ever Meant To Go. 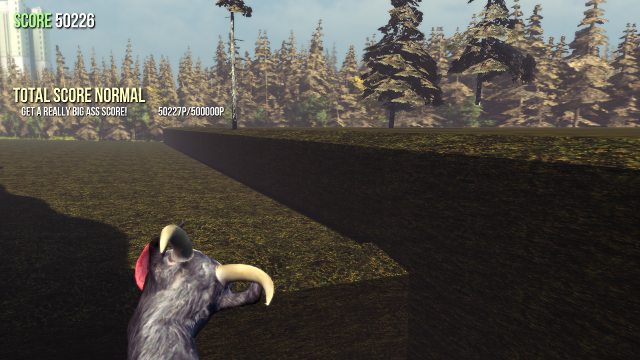 “It’s one small bleat for goat…”

I chose to end my Goat Simulator story there: with my goat’s successful escape from the oppressive farm and the dangerous, exploding city, using man’s own lethal devices to gain her freedom into the unfinished woods beyond. I felt it a fitting end to the crazy tale of explosions, satanic goat travel, and ramping humans off of other, similar humans.

Goat Simulator can be obtained for ten bucks on Steam. It’s definitely a… particular taste, and I can’t blame anyone for scratching their heads and wondering why you’d ever put down real money for something this stupid.

But I don’t particularly envy those people, either. I’ve had my fun with Goat Simulator, and I consider it money well-enough spent. What will your story be?