Last stop on my backlog-clearing spree for a while, the imaginatively-titled Future Wars (from the hands of sadly-now-defunct Radon Labs) has been languishing on my desktop for pretty much since before I can remember. Granted, my memory only goes back about three days or so in optimal circumstances, but the important thing is that this sentence is so long and unwieldy and run-on laden that I’ve already forgotten what I was even talking about. Hello! In today’s Indie Wonderland, I’ll look at Future Wars, from the hands of sadly-now-defunct Radon Labs. I’ve had it for a while! I don’t know exactly how long, but Future Wars was released in 2010…

Well hello there, title screen. Aren’t you just adorably sparse in every aspect. And so low-res, too. Is this really how they made title screens back in the heady days of 2010? 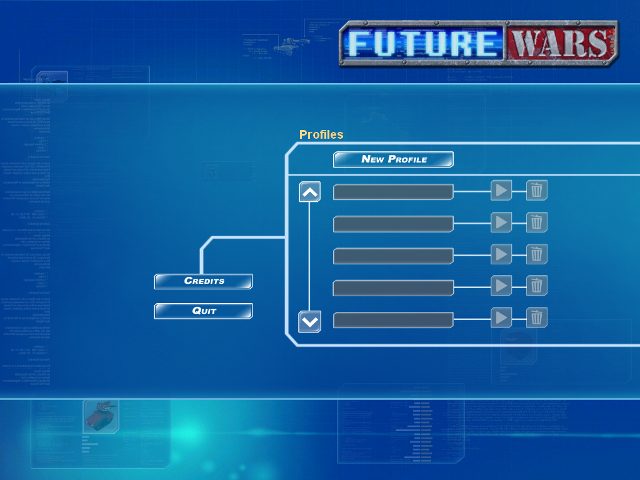 Was it really such a different time back then? 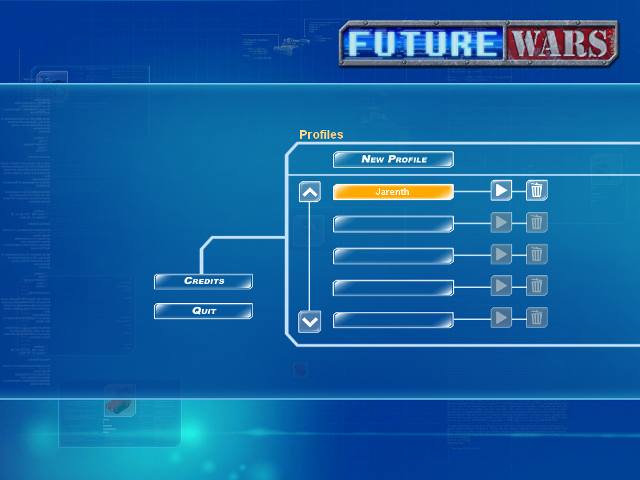 Once that hurdle is taken, however, I find myself at what I’ll tentatively call the actual title screen. Which is… not all that aesthetically different from the previous one, actually. 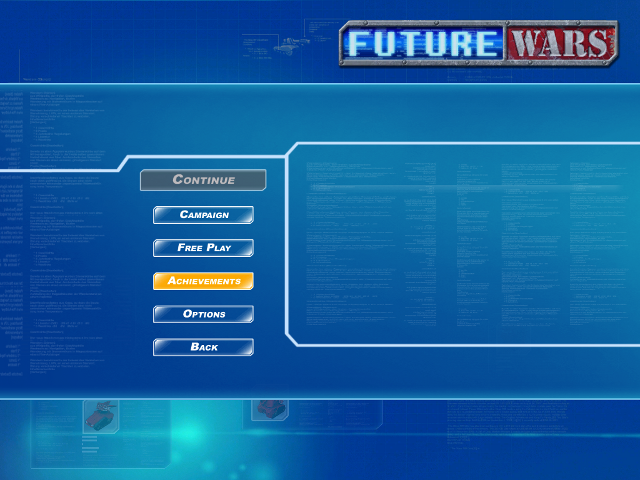 Everything you need to know about Future Wars’ options menu, I can summarize in this one screenshot: 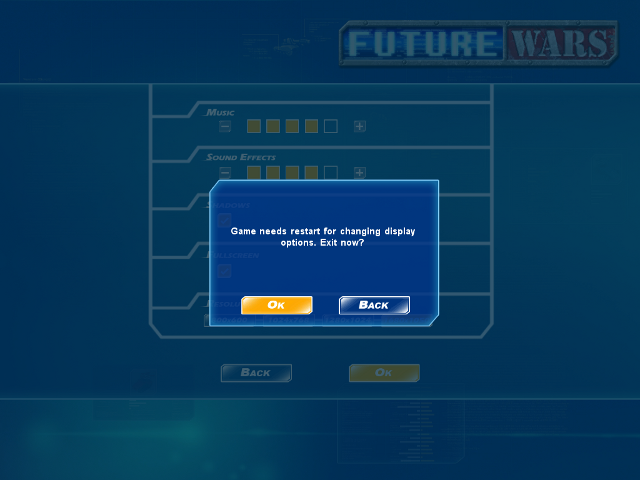 Four set resolutions, two ‘advanced’ graphics options, a five-step audio system, and enforced resetting. Is this *really* what 2010 was like?

And peep this marvelous Achievements screen, too. No, no, it’s not your standard ‘link to Steam Achievements’ shenanigans. It’s much worse. 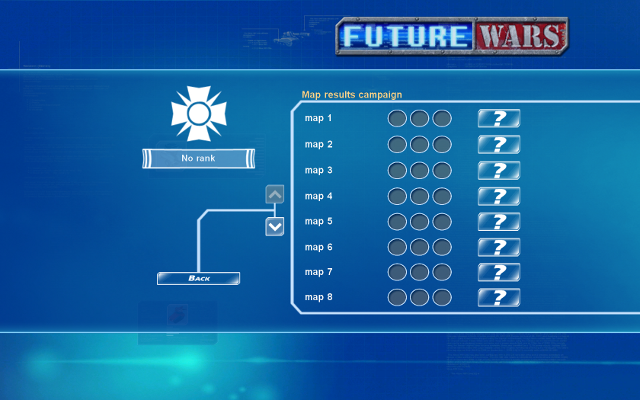 I… what literally is any of this?

Sorry, sorry. Normally I don’t nitpick the start of any game quite this much, but Future Wars’ opening is just… it’s magical. It’s such a gorgeous combination of obsolete interaction design principles and functionality-before-aesthetic eye-searing graphic design. And I haven’t even touched on the music yet, which I’d describe as a combination of militaristic wannabe-electro and a man doing an awful dubstep impression.

Alright, last menu screenshot, I swear. This is the Campaign selector: 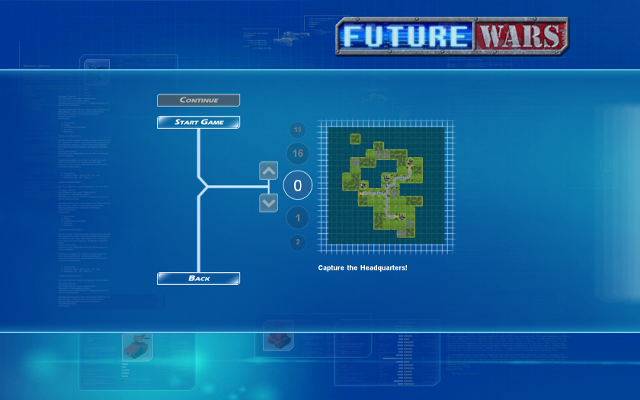 Of course it starts at mission zero. Of *course*.

Just look at how gorgeous it is. Of course it won’t give me some guiding information, any guiding information, as to what I’m about to jump into. And no, of course the arrows don’t do anything yet. Why would I be allowed to select one of the fifteen missions I haven’t unlocked yet? Out of curiosity? I spit on your curiosity.

Anyway, I might as well start the first level of this entirely unintroduced campaign. If this design pattern holds, I’m not holding out much hope for a proper narrative introduction of any kind. Will I be launched face-first into a square battlefield of blocky tanks and MIDI-style beeps? Only one way to find out!

I can safely say I was not expecting this. 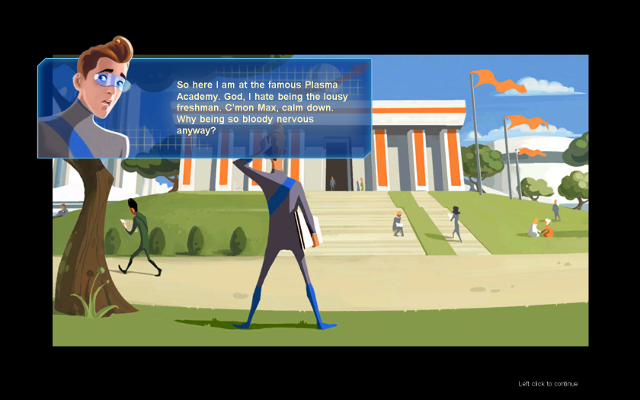 I can’t accurately recall just *what* I was expecting, anymore. But I’m fairly sure it wasn’t a still-frame cartoon intro.

A kid with stupid hair and floating toolbag glasses? ‘Plasma’ military academy, which said kid worries and muses over? Chins of varying degrees of intensity as a visual shorthand for strength of character? 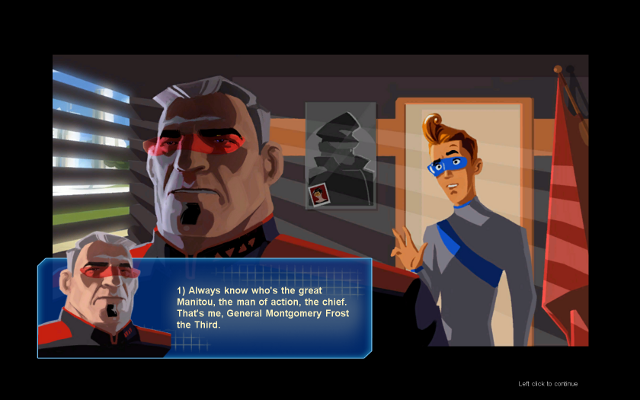 Just look at how intense this guy is.

When did my 2010-aesthetic block menu game turn into anime? 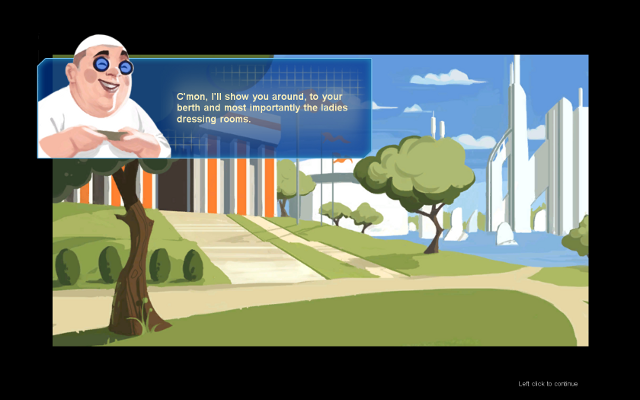 Of *course* he’s a pervert!

And the teacher character… No. No, I refuse to make any jokes here. It’s too simple, too obvious, like shooting dead fish in a barrel painted like a clown. Audience, this one is on you. Make me proud. 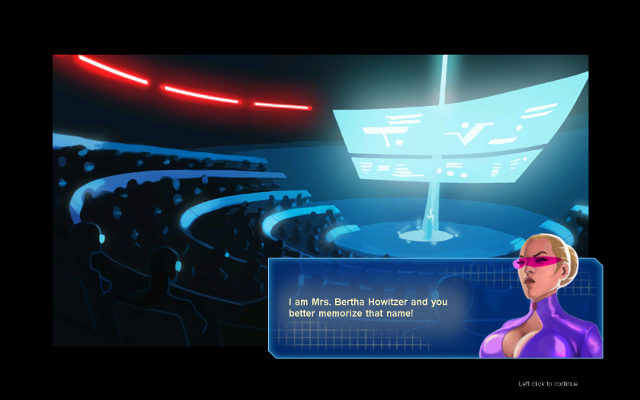 Back on something approximating track: the narrative hand I find myself having been dealt is that I’m some guy named Max, who’s studying ‘warfare’ at the Plasma Military Academy. Because that is how these things work. And as is somewhat common in these fantasy scenarios, ‘studying warfare’ more or less translates to ‘playing simulation video games in class’. Because the realities of warfare are best taught to fresh-faced teenage kids by disconnecting them from the actual horrors of war as much as possible.

Today’s might-as-well-be-magical pseudo-science excuse for ‘warfare training by way of simulation’ is called the TACTICAL WARFARE SYSTEM, capitalization NON-OPTIONAL, and it’s the actual game. And it looks like this: 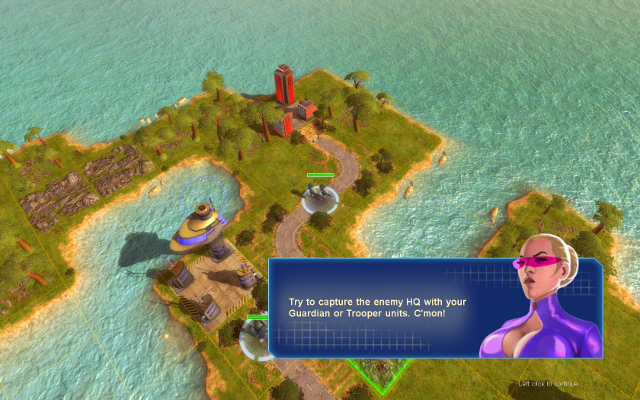 Future Wars ‘seamlessly’ segues into the first gameplay tutorial by telling me to ‘capture the enemy HQ with my Guardian or Trooper units’. When Max-me dutifully lampshades that he doesn’t have the slightest clue how everything works here, the NPCs mock him-me for not reading the nonexistent manual. 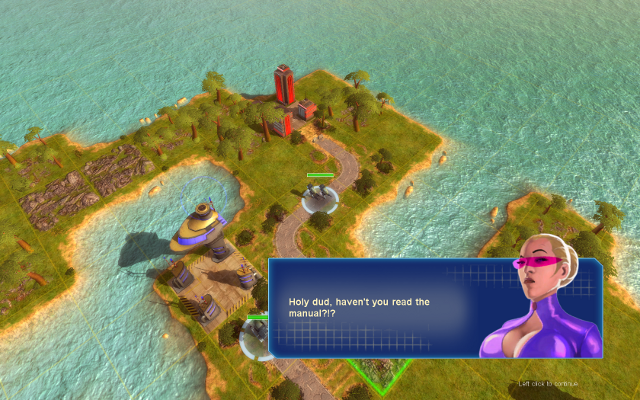 The manual, I would like to stress, I would gladly have read if it had been included with the game.

“Just select an infantry unit, order it to move to the headquarters and then start squatting” Bud helpfully offers. Thanks, Bud, you’re a pal. It’d be great if I could parse what like half of these things actually mean, but you get a gold star for explanation effort. Which is still more than what Ms. Bazookas is currently earning, so good job overall!

Alright, how do I… mousing around scrolls the view in a weird, hard-to-predict pattern, but luckily, WASD gets the same job done with a minimum of fuss. Mouse wheel zooms in and out, because I just have to get up-close and personal with the little… mech dudes? Are those what I have under my command? 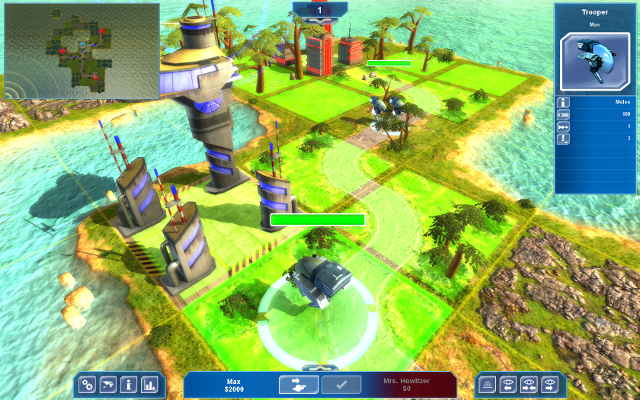 Or are they more like little flying ships? I honestly can’t tell.

I have a bunch of the little mech dudes, actually: two groups of two smaller ones that are called ‘Guardians’, and one larger ‘Trooper’. Clicking on either of them displays a green overlay on some of the fields, which I quickly find out indicates movement allowance.

My dudes are blue. I see a bunch of red cities. And one red ‘headquarters’, which I assume is mine for the taking. I know what I’m supposed to do here, now. I just don’t know how.

Actually, that’s a partial lie. I wouldn’t know what to do here if I only had Future Wars’ guidance to fly on. But at this point in the game, amidst the units and the square fields and the cities and the movement allowances, my long-buried Advance Wars training kicks in. “Cities? You capture those by moving any kind of infantry on them, them using a capture command. Infantry deal damage to city health equal to their own health: full-health infantry has 10 points, cities have 20 points, so in optimal circumstances it will take two turns to capture a city.”

Spoiler: this is exactly how Future Wars works. 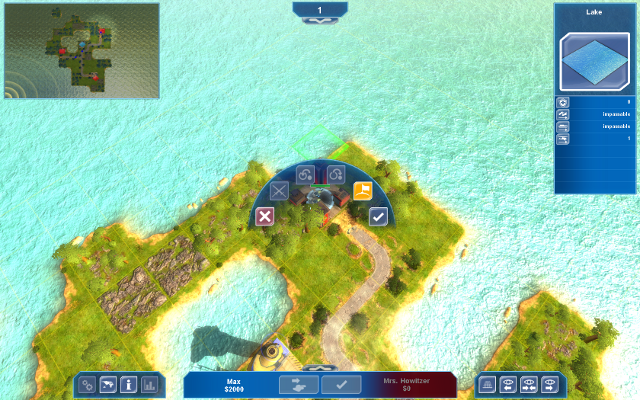 Down to the ocean bloom lighting effects.

Okay, I don’t exactly have ‘infantry’ as much as I have these mech dudes. And I think the numbers are a little higher in Future Wars? But the basic metaphor remains the same.

I move a Guardian unit onto a city. At the ends of its move, a handy-dandy half-radial menu pops up. Most of the options are grayed out, but I can either revert my move, sit around doing nothing, or engage in city capture.

Second Guardian, same as the first. The Trooper moves up to the undefended enemy HQ, but it takes one additional turn — and one neatly blinking ‘all your units are done moving’ checkmark — for it to reach it. 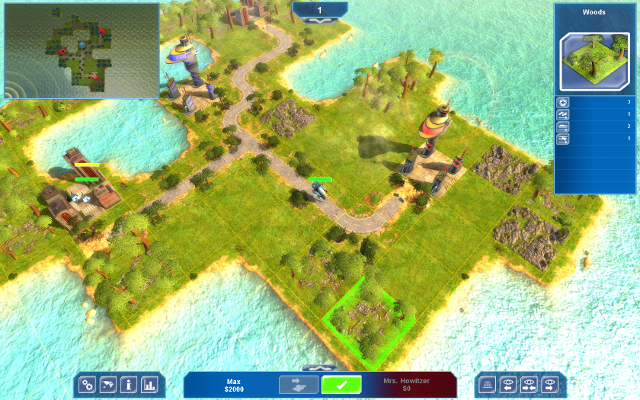 “IT’S OKAY, YOU HAVEN’T FORGOTTEN ANYONE. TIME TO MOVE ON.”

Okay, okay, that was literally the movement and victory condition tutorial. Mission 0, if the campaign is to be believed. Mission 1 is where the actual learning is at. 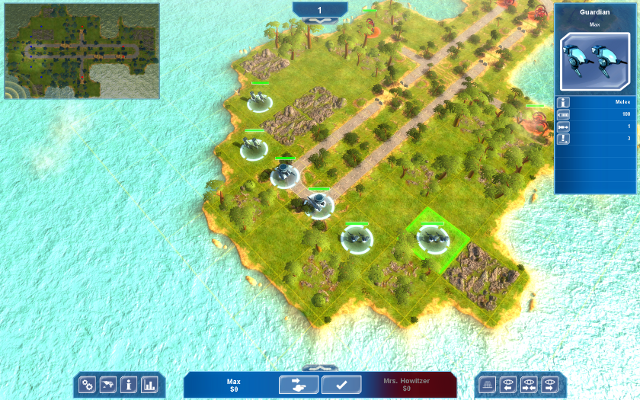 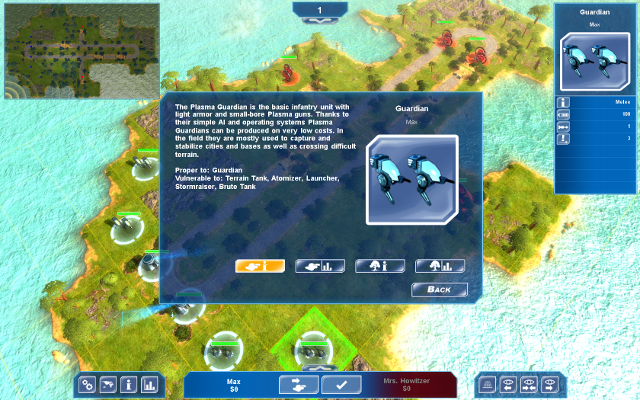 Except that these are mine… 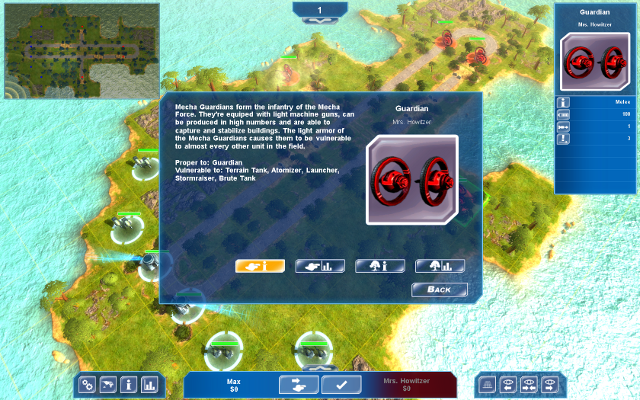 …whereas these are theirs.

So Guardians == weak infantry. And the Patrol dudes I have are your basic light scouting vehicle, only really good against Guardians. And two of those enemy Guardians just happen to be in range of my Patrol cars! Fancy that. 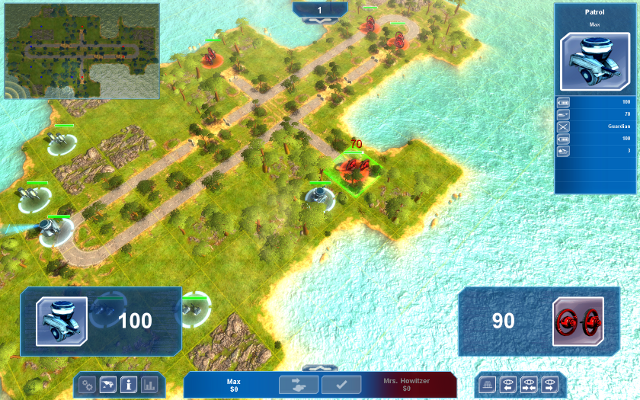 In the top right corner, I see: my unit’s health, the damage it’s set to do on the enemy unit, my unit’s name — gee, thanks –, the enemy’s health, and the amount of damage the enemy would do attacking at this level of health. See, there’s that Advance Wars instinct again: “Unit damage is directly related to unit health. Units with less health will deal less damage.” 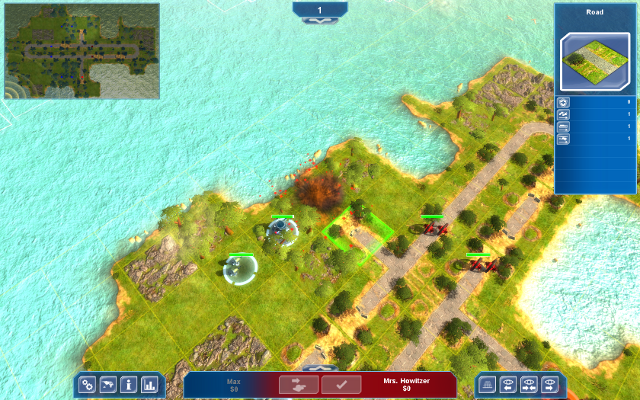 “Units with no health explode in smoke particles and red squares, for some reason.”

Mission 1 is, of course, still simple beyond compare. The enemy gets four light infantry, and I get two units specifically designed to counter light infantry. It’s almost like I’m being taught valuable lessons on unit balance, here!

Finishing mission 1 also gets me medals! Based on a school-type report card, no less. 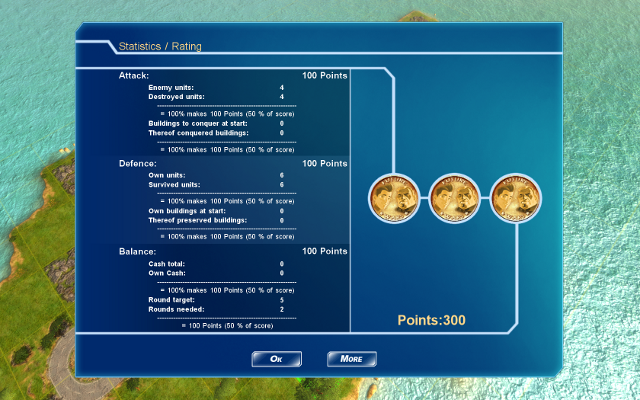 I score straight As, of course. I *am* amazing.

Mission 2, desperate to not upset the Advance Wars Status Quo any more than it needs to, introduces factory buildings for the creation of new units in the field. Built with money earned from captured cities, yeah. Mission 2 also introduces the obligatory ‘smarmy keener that has it out for our hero’ character, but the less said about Roy, the better. 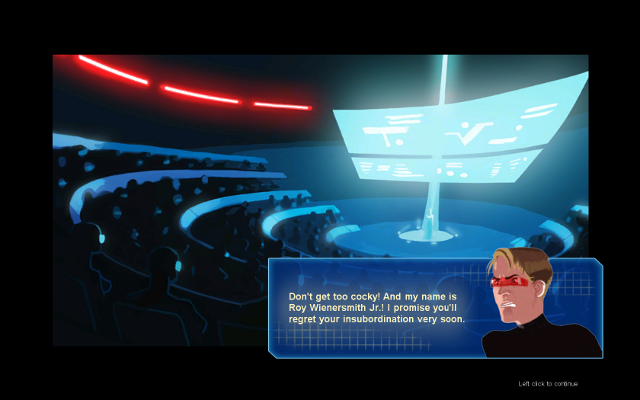 I swear to you this screenshot is as undoctored as they come, ROY BURN.

And mission 3… I’ll let mission 3 speak for itself. 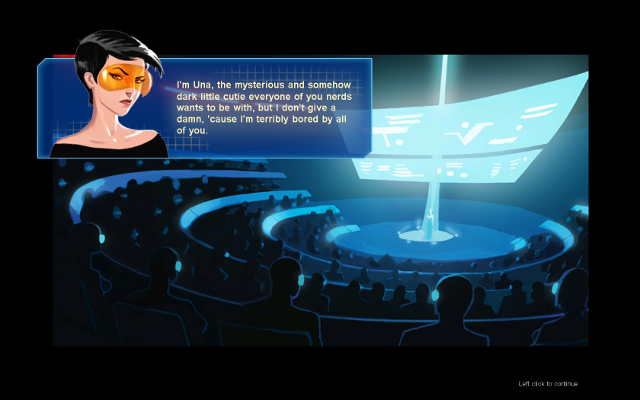 I haven’t really written much on the gameplay yet at this point, I know. It’s just… it’s just a tactical turn-based war game at this point. I haven’t seen anything yet to really distinguish it from Advance Wars in any way. And while that’s not bad, per se, it just means I have little to talk about. I can say ‘it’s like Advance Wars’, and either you get it completely, or you don’t get it to the point where I’d have to spend the whole review explaining the basic conceits.

Also, the first ‘three’ missions — starting from zero — were all rather boring and simple. But Actual Mission 3, which promises to cover terrain types, movement type and allowance and the importance of reading the terrain right, looks to be… actually possibly interesting? 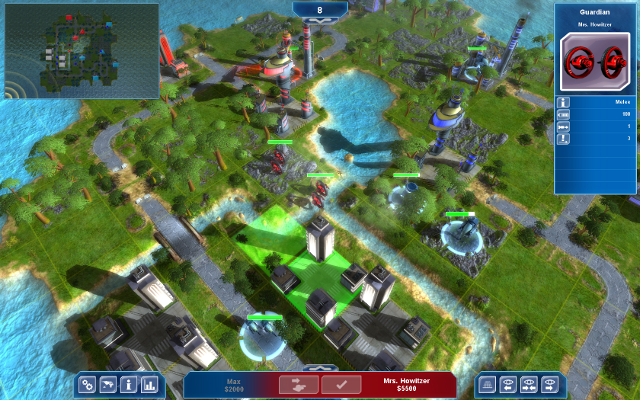 One actually interesting mission precedes more, I hope. Will Future Wars rise over the ‘like Advance Wars, but’ shadow any time soon? I’ll do some more of these campaign missions before getting back to you.