It might surprise you to learn that I actually did end the Broadcast! In Europe, that is. I fought my way through mission four, with explosive enemies; mission five, with customizable legs and turret-destroying enemies; and mission six, featuring a massive Broadcast Pylon boss-monster. In a single sitting, no less! It was pretty sweet. 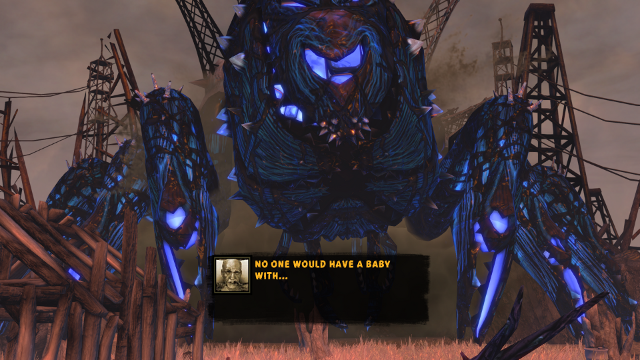 No babies were harmed.

Satisfied with a day’s work, I quit Iron Brigade.

Then, the next day, I came back to find that… well, remember how I had that Games for Windows Live update-mess that kept me signed out of the leaderboards and the multiplayer? At the time, I didn’t think it would be in any way relevant to my strictly single-player adventures.

You can probably guess where this is going. 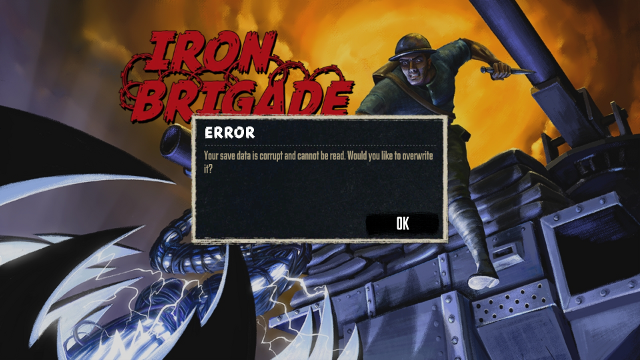 I got a degree of angry at this notice that I don’t *actually* think counts as ‘unreasonable’.

So yeah, that was my Iron Brigade progress all gone. I played a little more in the following days, but it turns out that losing hours worth of progress on a game you’re only really intending to play for one week can have a rather painful effect on motivation. I made it back up to mission five, but I was grumbling all the way through.

Still, replaying the earlier missions did give me a chance to try out some new tactics, some new loadouts and Mobile Trenches. If nothing else, it’s at least given me a certain expanded insight into the first act of Iron Brigade, even if that came at the cost of everything after that act.

So, my opinion on that first act of Iron Brigade? I’m going to say it’s pretty alright, all things considered. 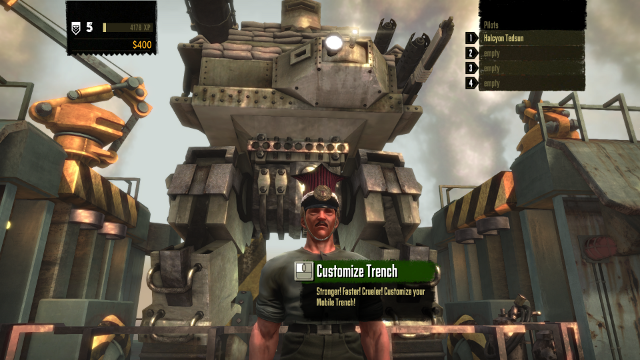 In case my previous-page description prose was unclear (and I make absolutely no underestimations with regards to the chances of that happening): Iron Brigade is, essentially, a tower-defense-esque objective defense wave-clearing. You and up to three friends ride well-armed Mobile Trench mechs, destroying waves of ‘Monovisions’, or ‘Tubes’ — the game uses these terms somewhat interchangeably — with your trusty mech-mounted guns, and your equally trusty deployable turrets. It’s what I call a Type-Two tower defense game, much like Defender’s Quest, and I’m going to get that Type-One-Type-Two division of tower defense games into common parlance if it kills me. It will be my epitaph: “Here lies Jarenth: He Died Trying To Subdivide Game Types“. Though that could probably be represented in a shorter way.

Sorry, I went off-track for a second there. Point is: Iron Brigade is a game where weird monsters walk a predetermined path while and turrets shoot at them, fully content to ignore either of those aspects, unless they’re the kinds of monsters that are not content to do so. 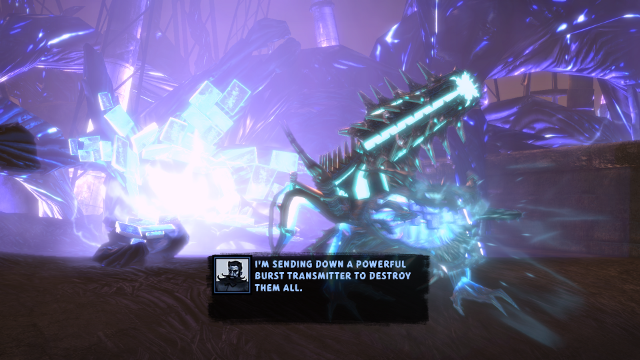 You’ll know them when you see them.

And overall, it’s a pretty good game at doing that.

Iron Brigade is a relatively simple game. Don’t expect Sanctum-level debates about dividing who brings which towers and who upgrades which guns and what to synergize. In Iron Brigade, you can bring up to six guns, and up to four turrets, and never that many at the same time. Turret selection is a little dependent on what enemies you’re expecting to encounter, and there’s some strategy to which guns you put in which slots so they’ll fire simultaneously. But at the end of the day, just make sure you have something against air enemies and something against armored enemies and you’re good to go. 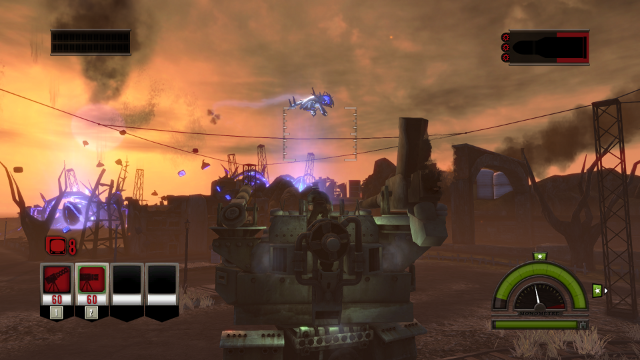 Iron Brigade being uncomplicated means it’s relatively easy to enjoy for what it is: a schmaltzy man-magazine power fantasy set in the backdrop of World War I filtered through a Double Fine Madness Lens. The story is nonsense, but it’s enjoyable nonsense: it’s an Evil Professor and his army of Evil Robots versus Manly Soldiers in Manly Fighting Machines, fighting to Protect Freedom! By way of explosions, and bullets, and bad puns, and also drinking, smoking and gambling.

No, but seriously: every mission ends with your character doing something Manly in that vein. Flip the ace of spades out of a deck of cards. Chug a bottle of unspecified moonshine. Light a cigar in his mouth by firing a handgun at it. 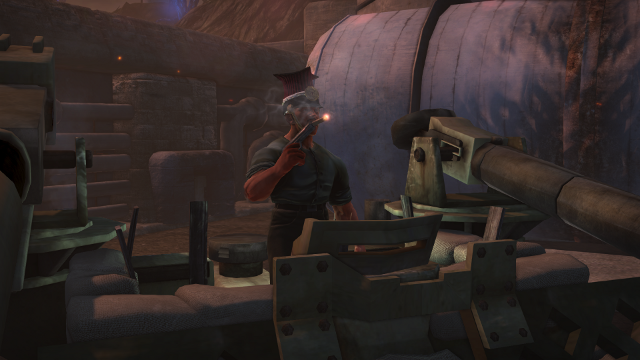 It’s so manly, I just went to pour myself a glass of whisky *while writing this review*.

I would like to have seen any woman characters, though. Preferably as one of the marines — as if women can’t enjoy cigars and steaks — but there isn’t even any cheesecake, either. The closest thing I saw to an actual woman so far was this shotgun, named ‘Rosie’. 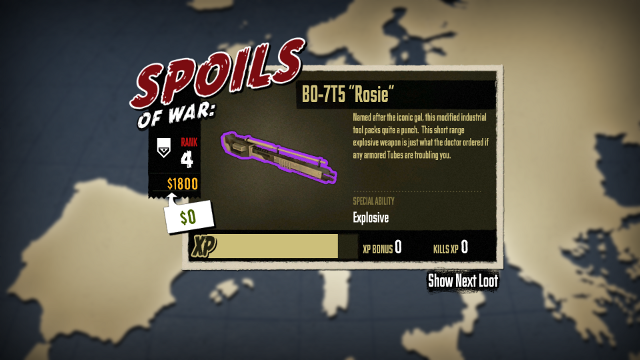 The casual, schmaltzy tone is reflected in all of the writing. Frank Woodruff Senior’s mission briefings are all of the GET OUT THERE AND KICK SOME ASS type. Your own character jokes and pun and swears — a tad PG — throughout the mission, in a way that actually gets rather annoying the way combat taunts always do, but whatever. And weapon and item descriptions are all…

Well, let’s put it this way. There’s a scrap-attracting turret called the Ionized Collection Prong. It uses magnets, but nobody is quite sure how they work. Can you spot the joke?

But by far my favourite exchange is the one preceding mission four, where you’ve just received the explosive Mortar turret. Turrets are demo’d on the ship, so while Frank Woodruff talked about the effectiveness of the new turret, said turret fired an actual explosive shell at some cardboard monster cutouts.

“That’s probably not very good for the ship”, I thought. 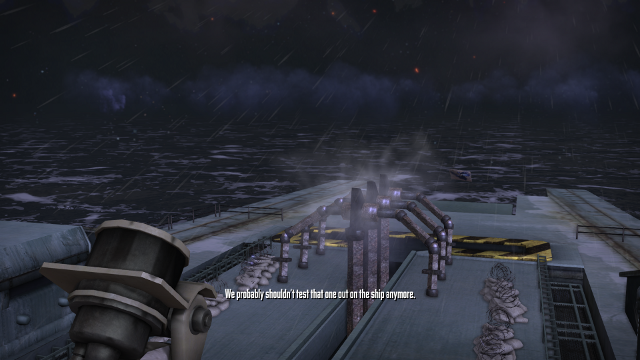 I do have some beef with what I’ll generously call the ‘loot’ system Iron Brigade finds itself saddled with. Y’see, it works like this: through leveling up, completing missions, finishing challenges, and collecting loot crates, you’re awarded with ‘items’. Items can be anything: turrets, guns, cores, legs, and marine customization stuff. They come with names, and numbers, and minimum usage ranks, and if you’re lucky, with special coloured edges and equally special powers. 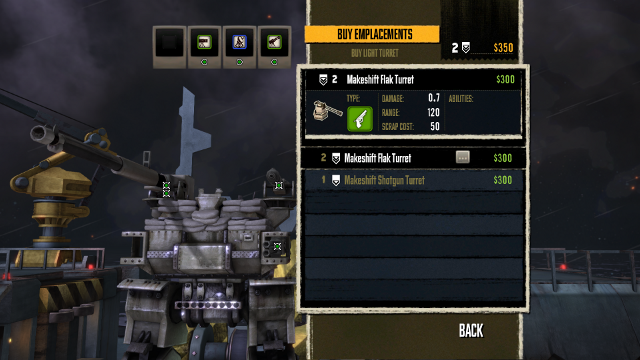 These turrets are Makeshift. Is that interesting? Does it matter, to anyone?

It’s not necessarily a bad idea: the concept of collectible equipment in a free-roaming tower defense-esque game makes Iron Brigade more akin to Dungeon Defenders than any other game I’ve mentioned before. But the whole system feels… cluttered, I guess? Cluttered, and unclear, and it never really feels like it adds much value.

If I get a Makeshift Shotgun Turret, and a Standard Shotgun Turret, and an Advanced Shotgun Turret, and they all have the same usage requirements, it’s not much of an interesting gameplay decision which one I’m going to use, is it? And the higher ranking turrets don’t often seem to really impact mechanical play style: they’re just the same turrets, with the same looks, just with higher numbers. And while different turret types do actually make for interesting decisions, so far, I’ve been rewarded those new (basic) turrets after mission completion.

Best case scenario, it’s pointless number-fiddling. Worst-case scenario, you’re actually forcing me to use the turrets I don’t want to use, just because they have ‘higher DPS’. And don’t even get me started on the inevitability of having to grind missions for the rare and unique weapons and turrets, that a brief look at a wiki shows me exist in spades.

That said, I do greatly enjoy the actual item variety. Especially your choice of Mobile Trench core greatly impacts your strategy in an actually meaningful way: the heavier cores trade more weapon slots for less turrets that are more expensive, turning your gameplay experience into that of a one-man army core. 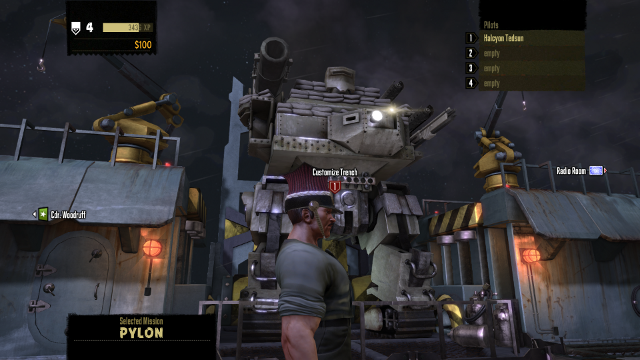 I don’t even know what compensating *means*.

While in contrast, the smaller cores with their plentiful cheap turrets are probably as close to a ‘traditional’ tower defense experience as Iron Brigade is likely to get. 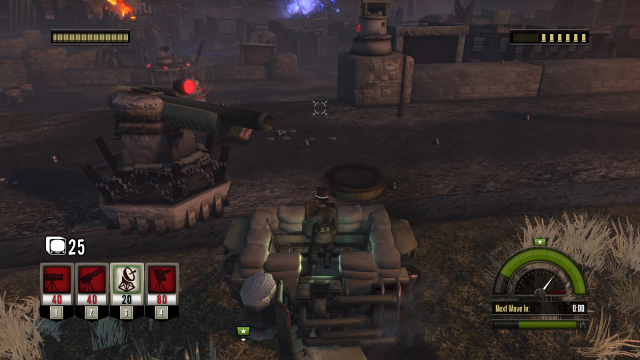 Correspondingly, I think Iron Brigade could be great fun in friend-based multiplayer! If only it wasn’t shackled to that god-awful Games for Windows Live. 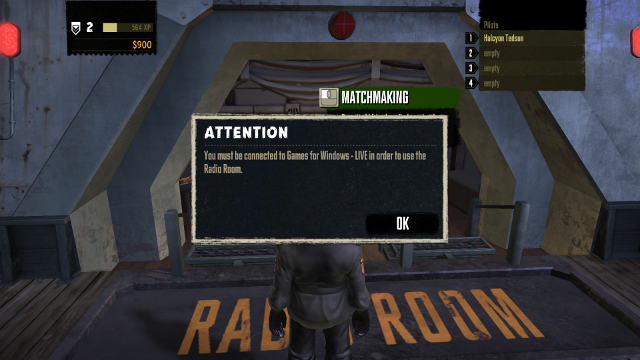 Bottom line of this review: if you like pseudo-tower defense, and original settings, and diesel engines, and man magazines, and explosions, Iron Brigade is fun. It’s straightforward, at least in the beginning, easy to learn and not entirely difficult to master, and it offers a decent range of gameplay styles that build on a relatively stable base of ‘shoot the enemies what come from the enemy places’.

It’s also simple, which may put people off, samey at times, and a little sexist (And don’t give me that ‘that’s the tone the game was going for’ nonsense: this is Double Fine, if anyone can write tonally consistent inclusive games, it’s them). It’s also currently bound to Games for Windows Live for a significant part of its functionality… and with that service (finally) giving up the ghost soon, and Iron Brigade’s status in that regard still contested, it’s not entirely impossible that we’ll be looking at an inextricably crippled game in the near future.

I had fun with Iron Brigade, and — time willing, and friends willing — I wouldn’t be opposed to going back to its crazy world one day. Whether or not you should make that same leap… at about fifteen bucks on Steam, which is not entirely un-pricey. And no demo, too.

Should you make the leap into the Mobile Trench? Up to you. Though I wouldn’t judge you if you decided to wait for the next inevitable Double Fine Bundle, and/or news about Iron Brigade’s post-Games for Windows Live future. Because a Mobile Trench man that can’t walk with friends… why, that’s hardly a Mobile Trench man at all, is he? 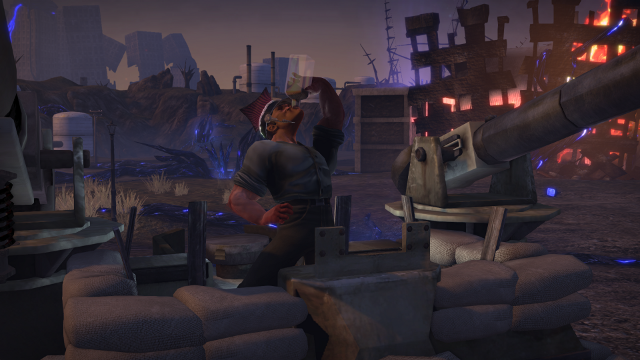 I’ll toast to that.