Hey, so guess what? I ran through the Electro Caverns and collected the drill arm. It belonged to a guy who was somewhat unwilling to part with it. Understandable, seeing as though it was his actual arm. 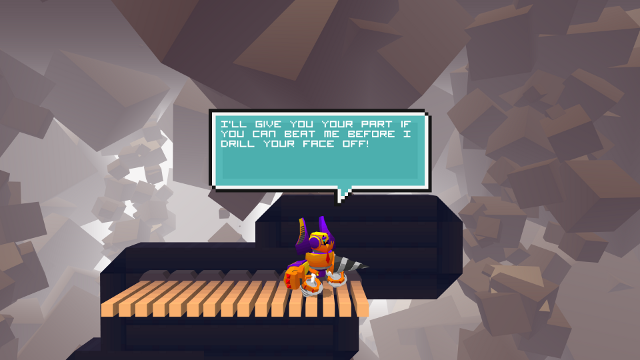 “You… you want to take my *arm*? To use as your own? You… you horrible creature.”

Not that that did him much good, mind. 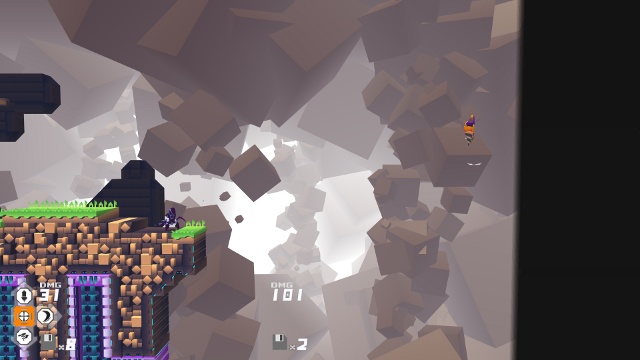 See-ya, only want to be the drill arm part of-ya.

Then, I ran through the Lost Megacpolis — ‘Level 2’ — to find the Imperial General. Long story short: he was something of a jackhat, so I punched him until he broke. 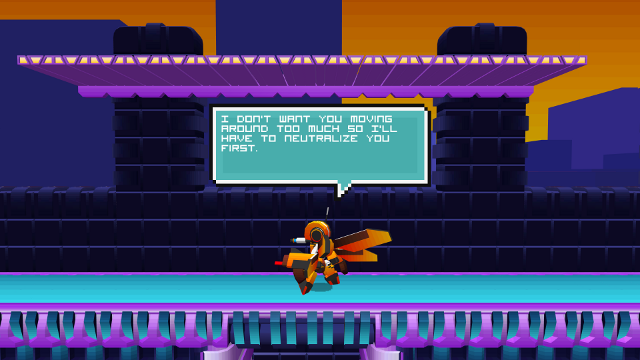 A General, of an Empire, and it turns out to be a *bad* guy? Why, I’ve never seen that before!

Then Ventu Village got invaded by evil mummy robots or something, I wasn’t too clear on the details. I got sent in, and, well… 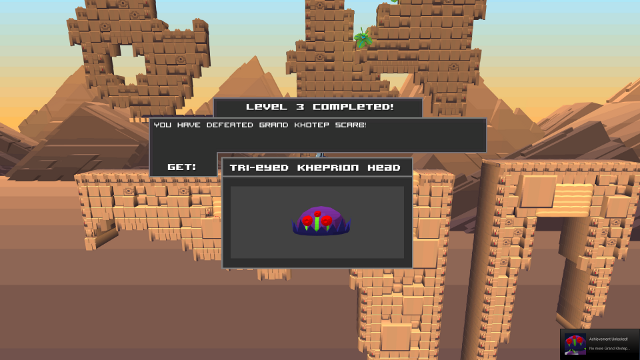 And right now, Ventu Village is being invaded again, by the ‘subprograms’ from the ‘undersomewhere’. Yes, that last bit is paraphrased. And yes, that tells you a lot about my opinion with regards to this game.

Megabyte Punch is a weird creature. On the surface, it has a lot of elements I really like in games. It’s a 2D platforming brawler with a focus on combat and exploration. It features strong customization, both in the graphical sense and in the mechanical sense, as a core gameplay component, offering a significant amount of freedom with regards to how you want to approach things. It has quite a few levels with different graphical styles, and (at least) different kinds of electro-dubstep accompaniment. It’s fast, and varied, and it has its own look and feel, and I’m just kind of ambivalent towards it. If I had to describe Megabyte Punch in a single word, that word would be ‘eh’.

“What did you think of Megabyte Punch?” “Eh.” 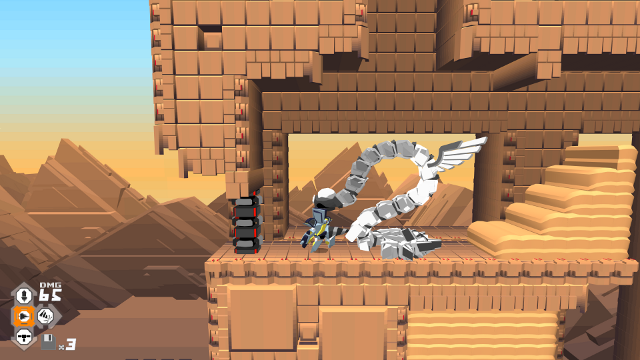 “I fought a giant silver robot snake. You know how it is.”

I’m not exactly bored when playing Megabyte Punch, mind. But the moment I turn it off, it’s cleared from my mind in a rather abrupt manner. That’s what I mean with ‘eh’: it has no mental staying power.

A large part of my ambivalence stems from the game’s controls. I’ve made this comparison a lot on the previous page, but Smash Brothers really does feel like one of Megabyte Punch’s major spiritual ancestors. And these kinds of Smash-Brothersian 2D-brawlers live or die by the responsiveness of their controls.

Megabyte Punch’s controls feel clunky — an adjective that’s fine to apply to graphics, but not really anywhere else. They’re generally perfectly functional, but they’re not smooth: they don’t give me the sensation of being able to do what I want, when I want it. Particularly in the area of directional basic attacks combined with movement — which is to say, ‘jumping and kicking’ — I never felt like Megabyte Punch was on the same page as me. Attacks were slow and unresponsive, I’d often miss with no clear sense of how or why, and either attacking in a different direction you’re moving in is flat-out impossible, or I’m just so bad at this game you should disregard my opinion altogether. But I cleared three levels already, so I can’t be that bad, can I? 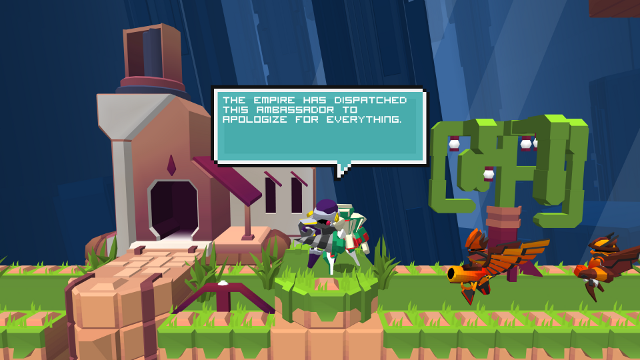 In case that I am, consider this my official apology.

I’m not really a fan of the term in general, but I really can’t bring my point across in any better way than by saying that Megabyte Punch has lackluster gamefeel. For instance, you and your enemies seem to have so little effect on each other: both of you just stoically take damage without reacting, until you hit that critical magical point of damage times attack force… at which point you’re rocketed across the level, to explode in a shower of bits and parts (for enemies) or to disintegrate in a puff of impactless respawning and confused anger (for you).

Don’t get me wrong: I do enjoy watching enemies take a million bullets to the face without flinching, then blast off like Jessie and James when the scythe arm makes an appearance. It’s even better if they blast through several layers of scenery before exploding, too. 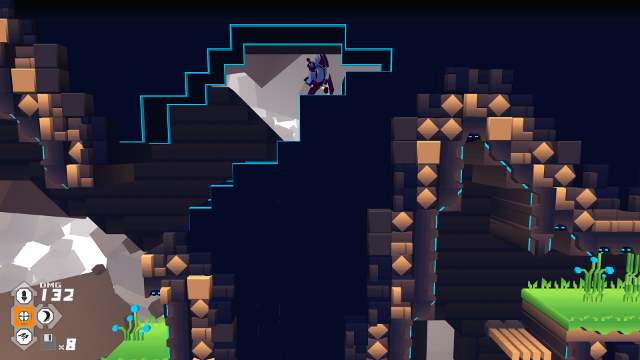 This may have been intended as impassable terrain.

But the crux of the matter is that there is very little sense of escalation. Everything in the world exists in a binary state: ‘perfectly fine’ or ‘INSTANT DEATH’.

The above applies a little less to the boss fights, that play out more in a (say it with me) Smash Brothers-like mini-arena. The boss fights are hampered more by the sluggish controls, though, but I’ve made this complaint before. Both game modes — the boss fights are basically equivalent to the multiplayer and the ‘duel’ tournaments — have their ups and downs. Having them both present does cancel out some of the weaknesses of either mode, but in the end, I find them down more often than up. 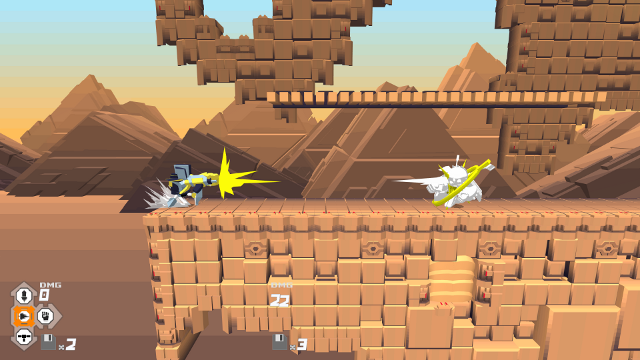 Stunlock guns and dumb AI have many a challenge disarmed.

While I dig the ‘exploration’ aspect of the exploration gameplay areas, truth bids me to say they are rather overlarge and dull. They’re fairly freeform in nature, particularly the levels with destructible scenery, but for all their size they have so little to offer. Almost all levels follow the same mold: you run around what could very well be procedurally-generated corridors, fighting random monsters and hunting random chests and either following or ignoring big random floating arrows. At various points, upon entering a ‘room’, large black-and-red doors will close on every exit: these doors will only open once you kill every enemy in the room. 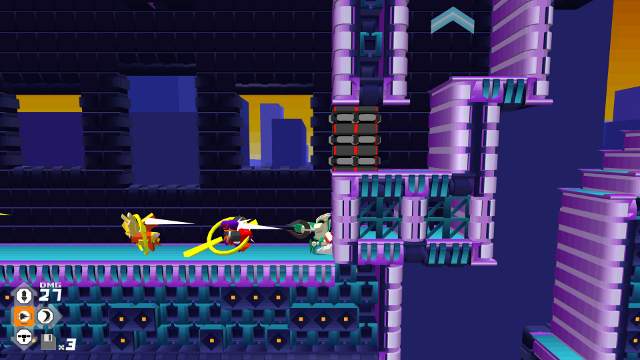 “You know the rules, Steve-bot. Blood for the blood doors, bits for the bits throne, or you don’t get to pass.”

Once you do, the doors open, and a checkpoint appears to mark your passage. Which would be meaningful, where it not for the fact that you’re not following any sort of linear path. You could be anywhere! On multiple occasions, I found myself having circled around the start of the level, triggering checkpoints that I’d already passed three different ways before. The appearance of the Combat Doors is entirely unrelated to the location of the Doro Door; after a while, the hollow checkpointing can even get grating. Thanks, game, for congratulating me on winning this pointless fight! I’ve fought hundreds of those guys already, and I’m not closer to the exit now that I was five minutes ago, but we can’t less all this progress go to waste! 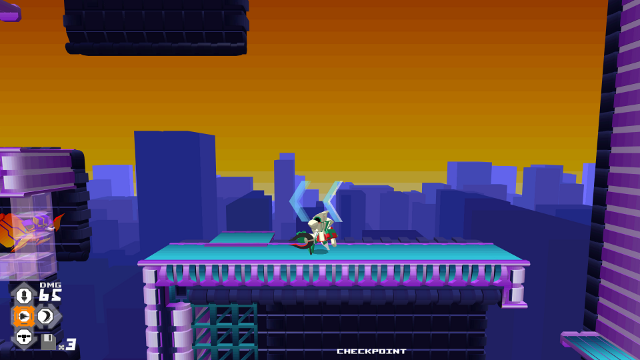 Also, these arrows. I get their intended purpose, but they *never* felt useful: I deviated from their directions all the time, and still found the door handily every time.

The customization does make a lot of things a lot of better. I really dig this implementation of the idea. As I’ve mentioned before, you get eight parts to interchange — head, core, shoulders, hips, and two arms and legs — and each part comes with either a passive or an active ability. Four active abilities can be slotted to X and the arrow-X-es, while the passives just passive it up.

First up: whoever decided that multiple, visually different parts can have the same ability, I salute you. I salute you so much. I would hate to have to grab the dumb, stubby Capsule legs just to get my sweet speed boost, and the Polycircuit legs aren’t my speed either… but the Exo legs? Sign me up. 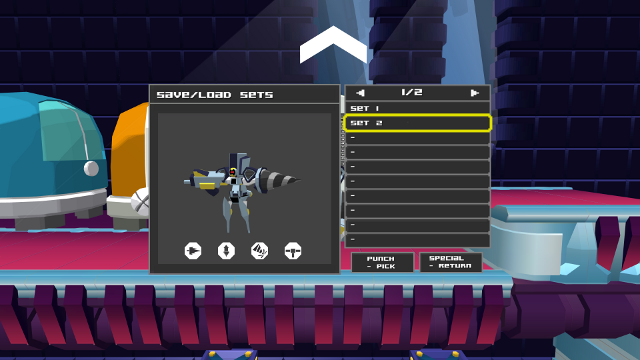 Exo legs go with anything.

Similarly, many abilities can map to multiple body parts. The gun arms seem obvious outliers, but I’ve seen jetpack heads, drill legs, and spin kick hips. A good addition to a good system, this choice vastly improves the visual customization options you get even when going for a certain ability build. 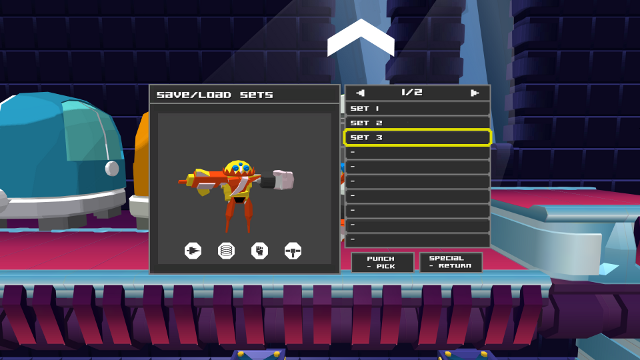 One minor complaint with the customization system would be that not all abilities are created equal. The plasma ball gun arm can’t hold a candle to the sniper gun, which is outclassed in every way by the machine gun. The twirl kick lacks the punch of the spin kick. The drill is good for the exploration gameplay, but in duels, my Massive Robot Fist or scythe-arm-equivalent has much more blasting power. And so on, and so forth. But then again, ‘pick the best option’ is basically the name of the dueling game.

One only slightly more major complaint with the customization system is that ‘collecting new parts’ is largely tied to the pre-boss exploration gameplay. Which isn’t even all that bad, it’s just… drudge work sometimes, I guess. Robots you defeat can drop the parts they carry, if you’re lucky. And the chests you find sometimes hold robot parts too. That are in no way thematically connected to the area you’re in: I found a part claiming it was ‘sharpened in Frostbyte Deep’ in the Electro Caverns. I haven’t even been to Frostbyte Deep yet. 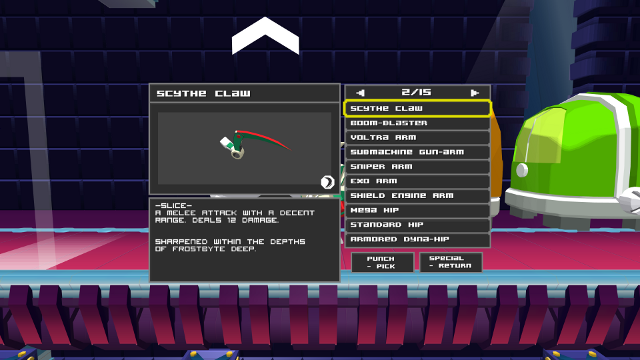 Scythe arm, I’ve had you since day one. What are you even talking about?

In fact, let this tie back into my main complaint about Megabyte Punch: nothing really feels connected. It’s all a bunch of neat things, systems and parts and graphics and gameplays and levels, but there’s no real sense of interplay between the parts. Oftentimes, it feels like a set of gameplay systems in search of a game. Either an exploration game with an actual non-tripe story and stronger level design — and preferably without the weird idea that you have to complete three of its massive-ass levels in one sitting without quitting or it’s back to the start — or a brawler game with tighter controls and maybe more narrow balance between different parts and moves. Either hypothetical game, combined with this customization system and this unique-feeling audiovisual design, could have been really strong.

As it stands, Megabyte Punch is okay. Fun to hang out in, fun to punch robots to death, fun to grab fallen parts to see if they’re new, and trying them on to see how they look. And then you exit it to go to lunch, and you forget all about it again.

Oh, and you can’t use Escape to back out of menus. I literally knew of no better place to put that complaint, so I’m appending it here, with no real rhyme or reason to that decision. I felt it in the spirit of the game to do so.

You can make such gorgeous robots in Megabyte Punch, though. 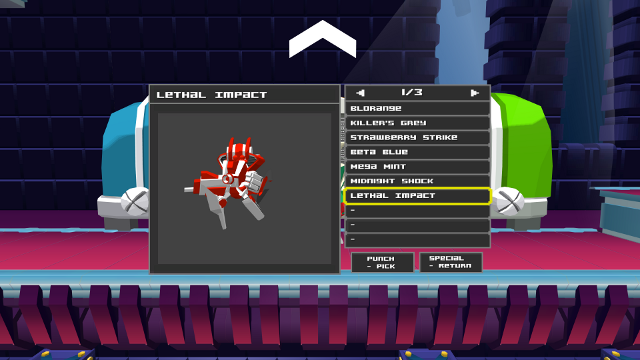 To reiterate: Megabyte Punch is an impressive set of disjointed gameplay systems hunting for a coherent whole. Everything it presents is either good enough or at least serviceable enough to provide a decent playing experience, but I can’t shake the feeling that a tighter design focus could have created something unequivocally good. As it stands, it’s… well, ‘eh’. Fun for a while. If you enjoy beating up robots, you’ll enjoy beating up these robots. And if you do have some local co-op friends, you can either split-screen some enemy robots together, or enjoy the sounds of ‘holy shit, you punched me into the wall so hard I exploded into pieces!’ reverberating around the house.

Megabyte Punch is available at various digi-outlets for fifteen euro. There’s also a Kongregate-based browser demo, which — given that Megabyte Punch is a Unity game — is basically functionally a no-install full demo. Big kudos to Reptile Games for that, and (as always) I strongly recommend checking it out for a bit if you’re at all interested by what you’ve seen on display here.