Megabyte Punch, by Reptile Games. Another game that I don’t really have anything interesting to say about in advance. It was gifted to me by my occasionally-fellow-writer and always-fellow-awful-punsmith X2-Eliah as a Christmas gift, and placed in my ever-expanding backlog for a rainy indie day. And hey, guess what kind of day this is!

Alright, that’s a little harsh: I was actually a little interested in Megabyte Punch upon first getting it. The name intrigues, summoning images of either computerized brawling or an awful, awful pun-off. Or both! Maybe it’s like insult sword fighting, except with really bad computer puns. “Mice to meet you”, that sort of level. “You’re about to USB defeated!” “I’ll drive you so hard you’ll run crying for your motherboard.”

It probably won’t be, but a man can dream. 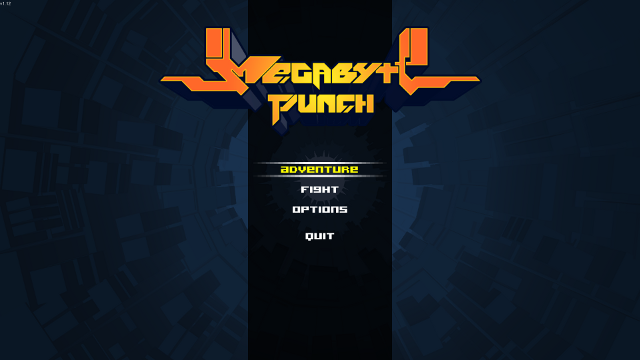 Whoops, sorry about that: I’m momentarily caught off-guard by Megabyte Punch’s beating electronic dubstep title heart. I’m so used to dubstep being the punchline to bad jokes, now, the honest possibility of playing it straight forces me to briefly, intensely, reappraise everything I know about life. Luckily, the moment passes.

Let’s see, what’ve we got… options are sparse, with only a perfunctory set of graphics, audio and input tweaks for the interested soul. I’m curious as to why I can fine-tune anti-aliasing and Vsync-options on a game as requirements-light as this, but my audio options consist only of two unlabeled sliders. But an odd assortment of options still beats no options, in most cases. 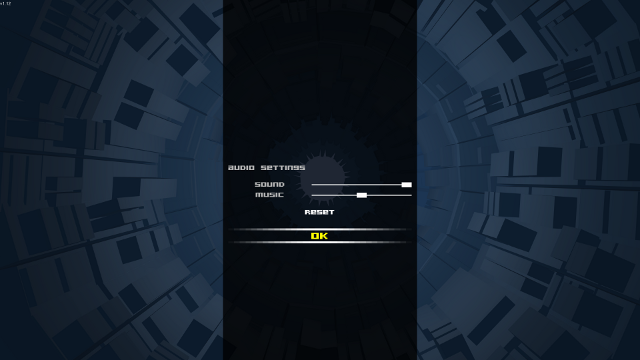 Seriously, though, not even a percentage number? Cut a brother some info, here.

Beyond that, there’s… nothing. Really, you can see it up in the previous screenshot for yourself. My only choices are Adventure, which takes me to a player-amount select screen — this Adventure accommodates one to four people, apparently — or Fight, which splits into Tournament and Versus. The latter sounds a little too multiplayer-rich for my blood, so I opt into a one-player adventure. Because who needs local friends with similar interests in electro-dubstep-scored games, anyway?

I start my adventure off thusly: 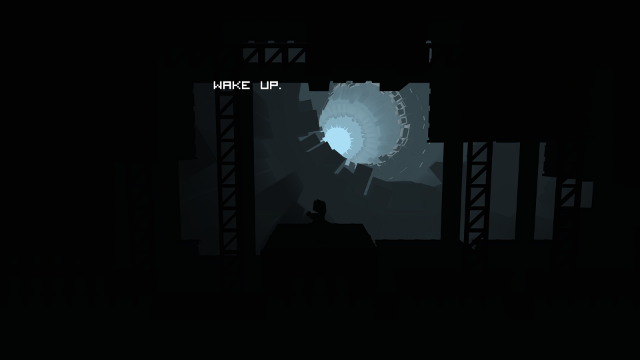 On a backdrop of shaded black, a bluish-white tunnel talks text to me. It is the Heartcore, it tells me, my creator. And I am a Megac, a digital life form. External forces vie for control of the Heartcore, but ‘the Megacs of the village [it is in] rely on [it] for survival’, apparently. And so on, and so on.

As this nonsensical info-dump goes on, my black robot outline is content simply standing around. I try hitting a few buttons, but nothing happens. I suppose this literal communion with a creator god must be quite the experience for the little robot guy, but I can’t really parse any of this information yet. What village? What’s a Ventu? Why isn’t there any light in this room? 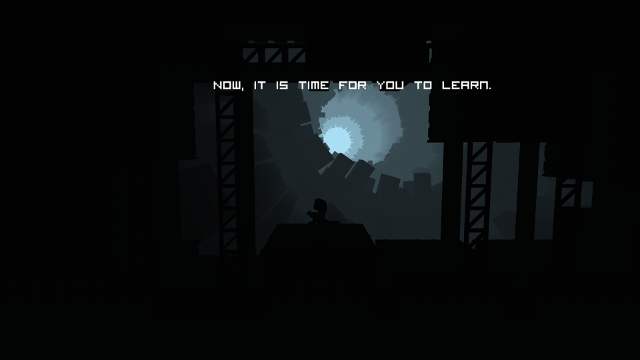 “I find it adds to my *allure of mystique*.”

Finally, the world shifts. And I’m taken from the black-and-white Talkshow With God to… 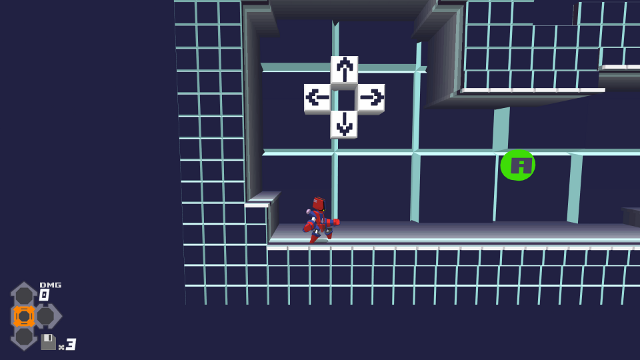 First thought: this is a pretty interesting graphical style. It’s… clunky, I guess? Coarse, reminiscent of low graphical prowess and limited computing power, but clearly intentionally so. The relatively smoothed-out robot feels like an outsider a little, but that might also be because it appears to be standing about three inches to the left of the edge of the world.

Second thought: alright, I’m down with this. Let’s learn how to control this clunk-world robot! And how to do whatever it is I’m supposed to be doing here.

I push the arrow keys, as seemingly indicated by the big floating arrow keys right above me. Nothing happens.

What the…? I hammer the arrow keys some more, to no effect. Then WASD: nothing as well. I don’t think I…

Oh, wait: the giant green A-circle provides a hint. I nudge my nearby 360 controller a little, and sure enough, that’s the key to making things go.

Of course! It’s like the answer was staring my in the face all along!

Controllers are fine and all, but I’m pretty sure I saw key bindings in the earlier input menu. In fact, I distinctly remember cycling through three sets: default-controller, default-arrows, and default-WASD. Why aren’t the latter two doing anything when I hit them?

The answer, it turns out, is that I wasn’t cycling through three co-existing sets: I was selecting one of three mutually exclusive sets. I’ve gotten too used to games that allow keyboard and controller controls simultaneously, I think: as with the serious dubstep, my mind literally refuses to go with the notion of input modality scarcity for a brief moment. But then I remember that Megabyte Punch supports up to four players in this play mode, necessitating a stricter input-mapping as the only counter to massive confusion. “Wait, who’s controlling which robot? I’m pressing the left arrow, and they’re all… are we all controlling every robot?”

After a little experimentation with the various buttons of importance, I settle on a slightly-altered arrow-key movement layout. The big floating controller blocks change to reflect this, luckily. 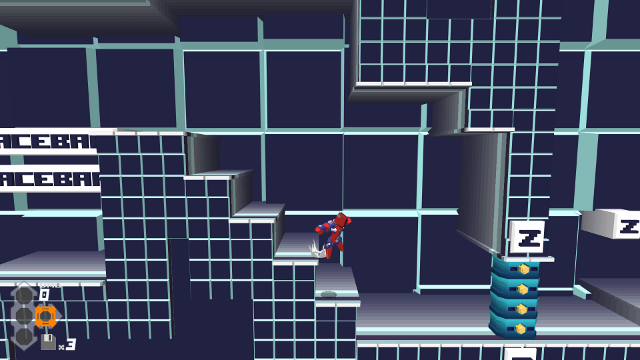 Immediately and irrevocably putting Megabyte Punch ahead of other games I could name.

Arrows control my little robot. Spacebar makes it jump. Z causes it to throw wild robot punches, directional when combined with the aforementioned arrows. This proves useful for smashing up a number of odd block-like things that bar my tutoripath. 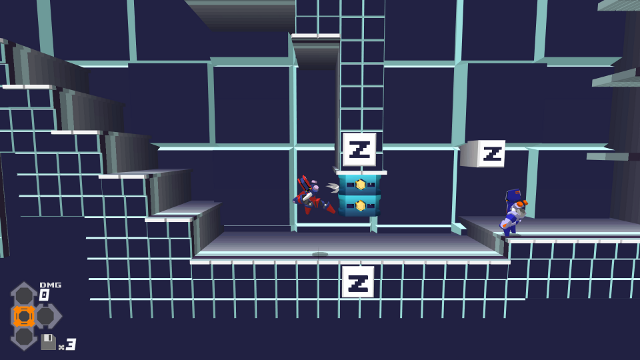 Z allows me to talk to friendly robots, as well as bust up other, unfriendly robots. The tutorial room that introduces this concept is very adamant about me understanding it. 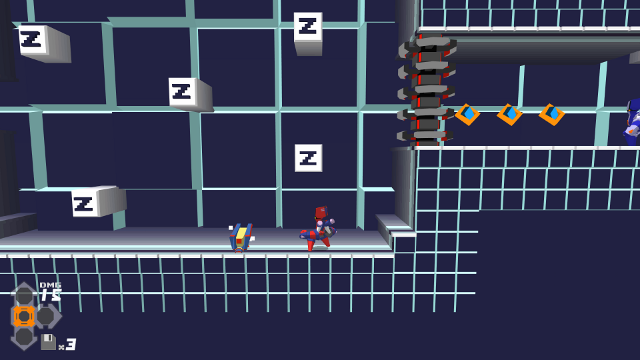 As far as I understand it, from friendly robot hints and from empirical experimentation, combat in Megabyte Punch adopts a very Smash Brothers-esque metaphor. Attacking enemies deals damage and (occasionally) knocks them around. But the damage itself isn’t what kills them. Rather, higher levels of damage makes them fly faster and farther when knocked around, bouncing them off walls and blocks like the metallic ragdolls they are. Until, eventually, this increased force reaches a critical threshold of sorts… where impacting the walls no longer causes enemies to bounce, but rather to explode.

The first training room’s enemy leaves a spinning something behind when it dies. What could it be? I pick it up, and with the help of another friendly robot, I figure out it’s the defeated robot’s torso. Which is… really super grim, actually, if you stop to think about it? But more to the point, this is what the game rather clinically calls a ‘part’. 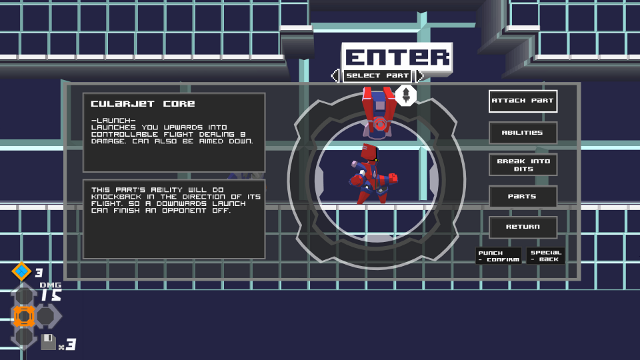 A pretty dandy part, handily diverting attention from the fact that I just ripped it out of another robot’s metallic body. 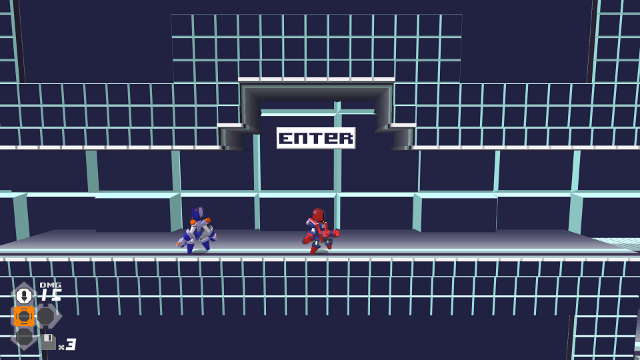 Call me Frankenstein’s Robot, I guess.

My current rocket torso, for instance, allows me to blast off. 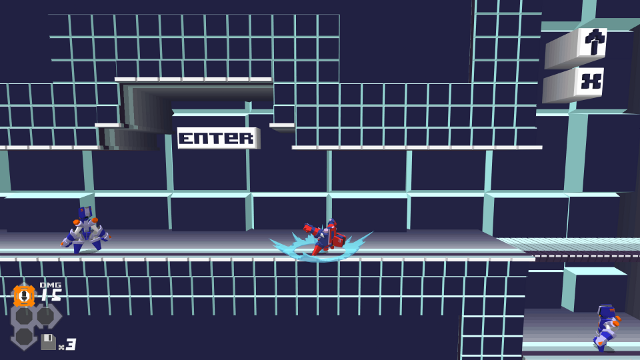 Other defeated enemies explode not into Frankensteinian body parts, but into blue-and-orange diamonds-within-diamonds called bits. I’m not sure what these bits are for, but I’m given to understand every 64 of them I collect grants me an extra ‘life’. Because that is something Megabyte Punch does, apparently.

The whole shebang — bits, lives, and directional special abilities — can be seen in the lower left corner of the UI. Or, rather, bits, lives and abilities are the UI. I can summon the parts menu with Enter, and the regular menu with Escape, but otherwise Megabyte Punch presents a very clean visual field. Of which this paragraph can be considered due notice.

The rest of the tutorial area is fairly straightforward, save for the part where I learn to crotch-thrust.

And then I go through a glowing blue doorway, and I find myself somewhere else entirely. 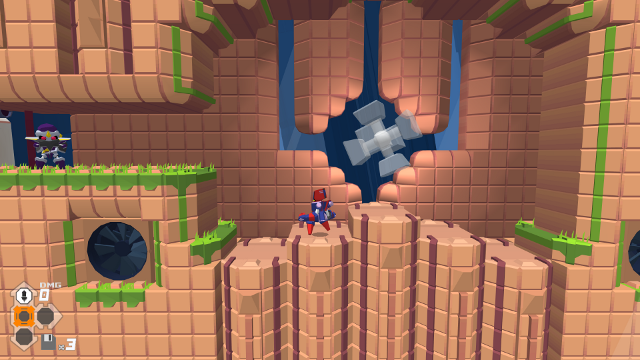 As it turns out, this place is Ventu Village, the town the Heartcore wouldn’t stop yapping about. I run and jump around it a little. I talk to the plentiful Megacs running around, and learn that I’m supposed to go to ‘level 2’ to meet up with the ‘imperial general’, wherever and whoever the hell that is. I find a shop, where I can spend my bits as currency to obtain new parts. I find a ‘colour capsule’, hidden away in a secret room on the left side of the village mountains.

And I find my house! 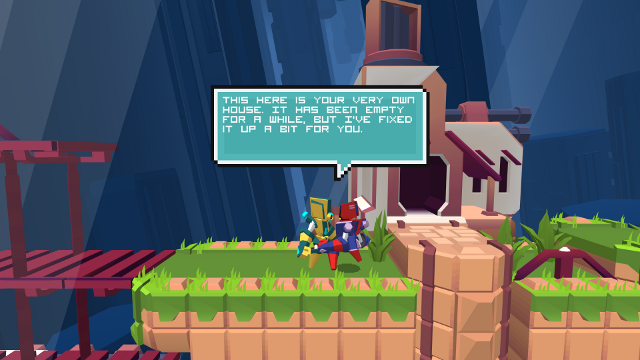 Inside of My House, three colourful consoles provide me with customization options. The blue console allows me to ‘download’ parts, from a small list: standard-type everythings — arms, legs, head, core, shoulders, and even hips — as well as the two new parts I picked up in the tutorial. Assumedly, later on, I’ll be able to use all the parts I’ll probably find to customize my Megac before going into battle. For now, all I have is the jetpack core, and a simple arm that increases the damage on my basic attacks. Which is still better than the standard arm, so hey.

The orange console allows me to select paint jobs. Normally, there would only be one paint job here… but I just now retrieved that hidden colour capsule from the hidden place, etcetera etcetera! Soon, I am a hideous shade of purple and more purple. 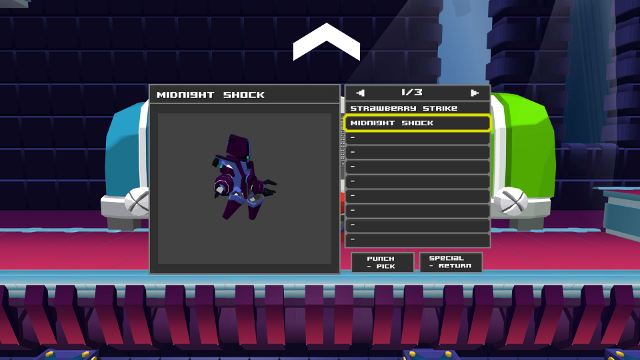 The green console, finally, lets me save robot customization layouts. I’m assuming this might be useful later, sometime.

Beyond all that, Ventu Village is not a particularly interesting place. I decide to do as told, for once, and go see the general on Level 2…

…except Level 2 is blocked off by a rockslide. One robot has the drill arm part I need to proceed, but it resides at the end of Level 1 instead. Okay, I see how this is going to go. Very Metroidvania. Sure, Megabyte Punch, I’ll play your game. 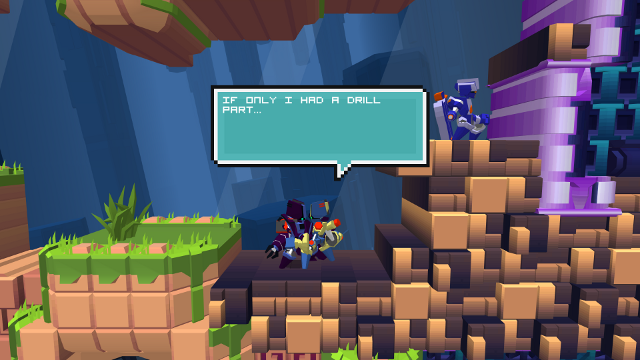 “If only I had a drill… I mean, I know exactly where to get one and how to go about doing so, but I’d rather stand here lamenting my sorrows.”

The ‘Doro Door’ to level 1 is, luckily, right outside the rockslide, and still totally accessible. I grab a shield arm from my home, move through the blue-white planar gap, and find myself in a place called the Electro Caverns. 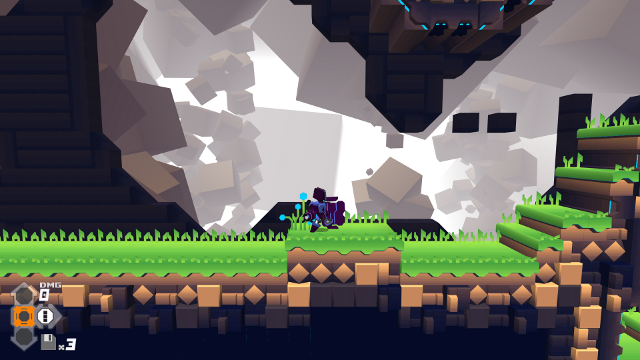 A little light on the Electro, but it’s got the Caverns down pat.

Be back after I collect that drill arm!