I fixed Watabot! Also, Puddinbot, Lumibot and Powerbot. I’m in the middle of trying to fix Turbot, who looks like he has a drill sticking out of his face. 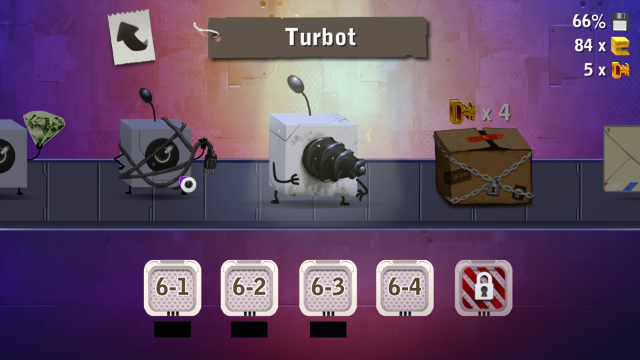 This probably makes sense to someone.

Oh, and I also took out a giant three-eyed slime monster call Big Mama. I gained access to it by using the key I lifted from Tetrobot, then shrunk it by pelting it with blocks and tricked it into triggering a switch for me. 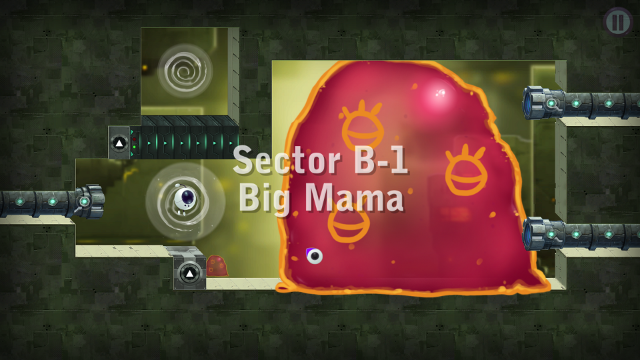 What did this robot even *eat*.

So far, I’ve completed five full level sets of Tetrobot and Co.. And with each level set five levels, plus the bonus key one… suffice it to say I’ve spent some time as Psychobot. I’m halfway into level 6 (‘Turbot’) at time of writing, and… I’ll probably go back to play some more after this review is over. I’m almost certain I’m going to go back; it’s not unlikely I’ll end up 100%-ing this game over time, which is not something I do often. But Tetrobot and Co.’s siren song, she calls to me.

Tetrobot and Co. is a great example of the kind of game I don’t see as often as I’d like to: a game that I’m basically just totally positive about. Tetrobot and Co. is a good game, you guys, is what I’m saying. It’s pretty, it’s clever, and it’s constantly changing its mechanical tricks and difficulties while always staying true to a simple set of basic controls. It’s a smart puzzle game built over a strong core, and damnit, I have it open while writing this review and the urge to tab back in to play a few puzzles is ever-present.

Tetrobot and Co. is a good game. This puts me in the sometimes difficult position of not having a lot to write about that doesn’t sound like affectionate gushing, but I knew the risks when I took this job. 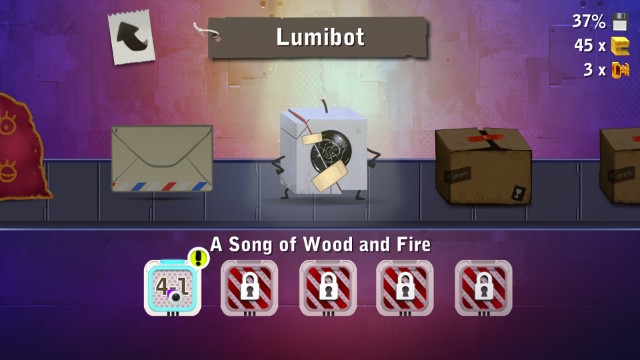 I don’t know if Lumibot, the laser-robot, knew the risks when it took the job. But I can only assume it didn’t.

Point the one: Tetrobot and Co. is clever. Really clever. From the deceptively simple set of basic controls introduced in the bowels of the initial Tetrobot, it has built a continually evolving set of puzzles that — even six levels in — still retain the capacity to baffle me… 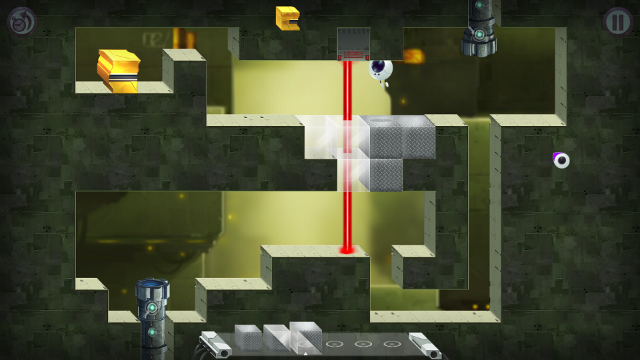 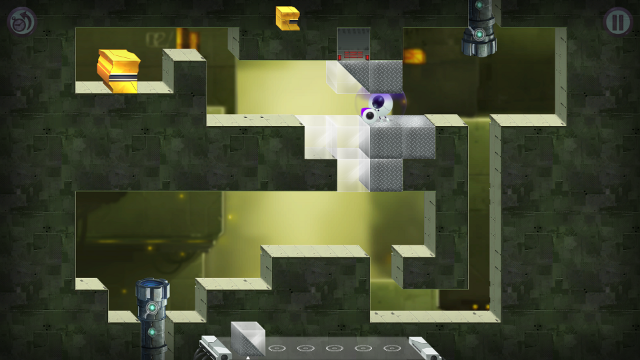 Tetrobot and Co.’s puzzles are hard not because of mechanical tricky or twitch-based timing reflexes (aside from a few exceptions), but because they require a lot of out-of-the-box thinking. Each level is basically structured in the same way: a series of apparently relatively straightforward puzzles guide you from the start to the exit, making use of one or more of the mechanics sets introduced in the current of earlier levels. Solving these simpler puzzles the ‘intended’ way often gets you to the level exit with a minimum of fuss. 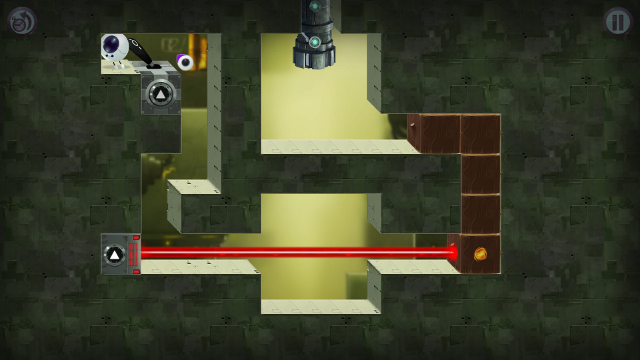 While teaching you useful mechanics lessons in the process.

Getting to the memory cores, however, often requires solving the puzzles in more unconventional ways. For example, using fewer blocks than you initially thought you needed, and taking those blocks to new and interesting ‘unintended’ places.

Sure, you could solve this puzzle by building a wood tower over to the laser. The laser lights the wood on fire, the fire spreads, and you have clear passage to the next room. 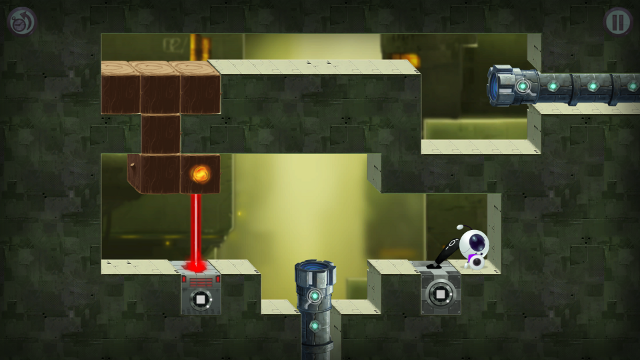 If you want to be wasteful about it.

But what if, instead, you removed those two blocks, and fired one of them through the active laser? That would catch that one block on fire, then cause it to stick to the other wood blocks… catching them on fire too. Now you still have your passage, but you also have one wood block left in reserve. 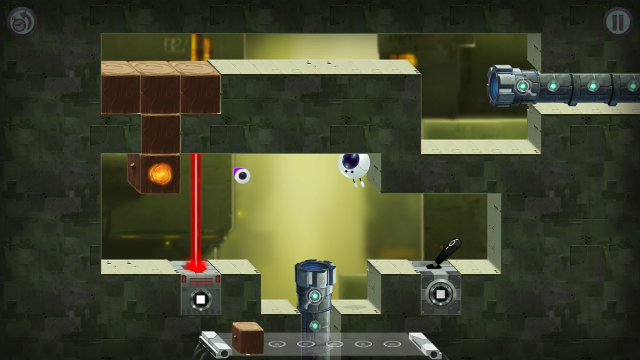 The rewards of brain-power are immediate and quantifiable.

Then, a few rooms later, you can use that block — and another wood block you managed to salvage — to gain access to this otherwise inaccessible memory core! 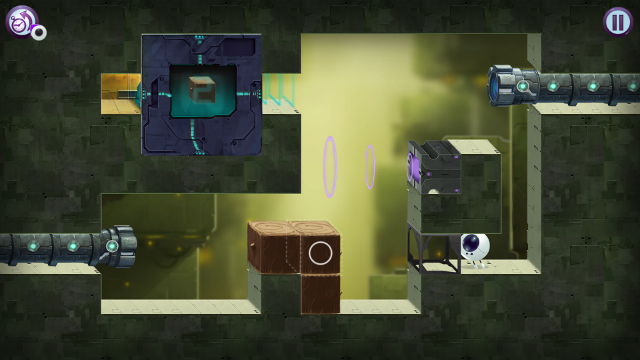 Assuming you can *somehow* get the wood blocks past the matter destroyer.

Other puzzles play with clever reinterpretations of other mechanics. In the Watabot levels, you learn that a rotary launcher can fire you or other blocks through otherwise lasers, as well as through impassible water blocks. Then, later, near the ‘end’ of a level, you’ll run into this room. 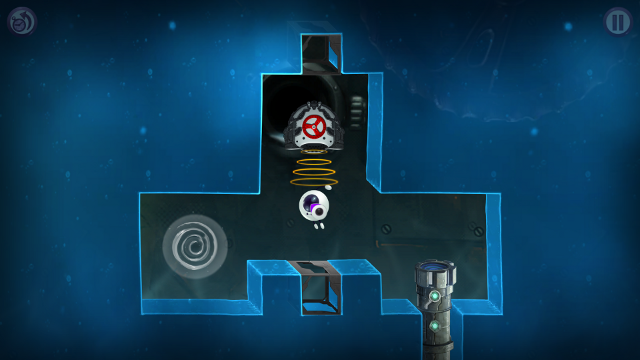 It’s almost a test, to see if you’ve been paying attention.

And then some puzzles are simply hard. 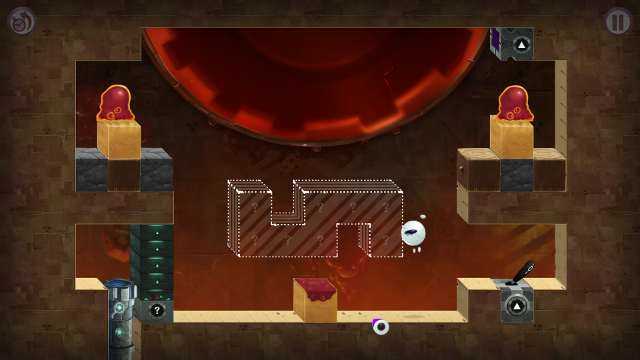 This puzzle is an example.

The new mechanics later robots introduce increase the overall difficulty, but not always the overall complexity. Puzzles still generally have as many moving parts in later levels as they have in earlier ones… it’s just that those moving parts are new, and unknown, and maybe a little more involved. Increasing puzzle difficulty this way, without ‘simply’ just making everything awfully complex, goes a long way towards keeping the game feel evolving, interesting, and well-designed.

Tetrobot and Co.’s puzzles are hard, but fairly forgiving. While many puzzles do require you to do everything correctly from the word go, levels are short and easily replayable. Furthermore, a very generous rewind function — I’ve touched on this in brief before — always allows you to rewind time a short amount. I think it’s semi-checkpoint-based, not time-based? But whatever the base, you’re always allowed to rewind, forever, without any impact on final score whatsoever.

Oh, and you can’t die or lose either. Get trapped by, say, a laser, and Psychobot will just start yelping, while the aforementioned rewind button starts a subtle audiovisual attention cycle.

In fact, let me just brag a little here: so far, I’ve managed solved every single puzzle Tetrobot and Co. put before me… except one. I had to look up one puzzle, because I couldn’t stand the idea of going on without solving it, and it was painful to see in a YouTube video just how much I’d been missing the mark. 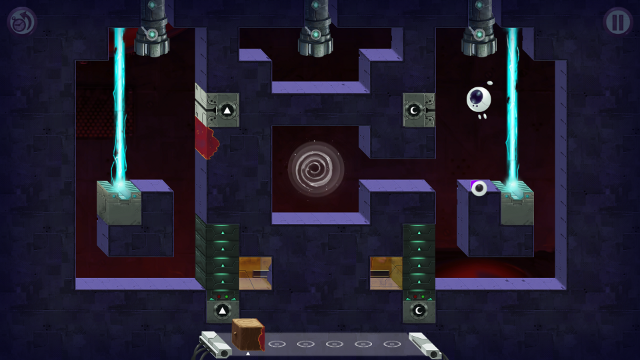 It was this block. I could *not* figure this block out.

Simple and intuitive controls further help Tetrobot and Co.’s appeal. For movement, simply click anywhere in the screen, and Psychobot will go there… assuming it’s reachable. Psychobot usually plans fairly smart paths, too, avoiding hazards and obstacles and not routing himself through flippable levers too much. He’s not very good at avoiding the mobile slime monsters, but that can be a later upgrade. 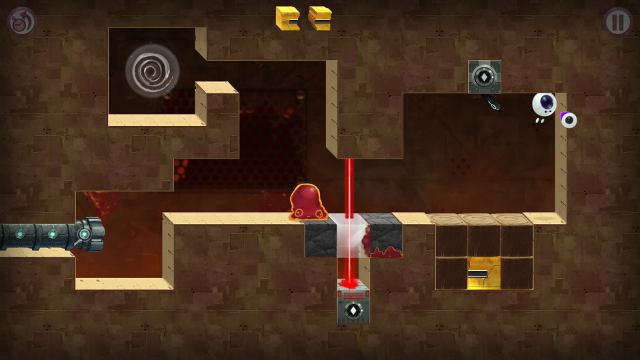 What do you think happens to a slime monster that wanders through a high-powered laser?

If I had to level one complaints against Tetrobot and Co., it would be in the controls department: Psychobot can be a bit finicky to control sometimes. Path calculation is usually very good, but Psychobot’s AI doesn’t deal with many moving parts well. It’s usually not enough to mess up puzzles, but it can be a little annoying to watch the little guy bump headfirst into lasers over and over. And, of course, for some puzzles… 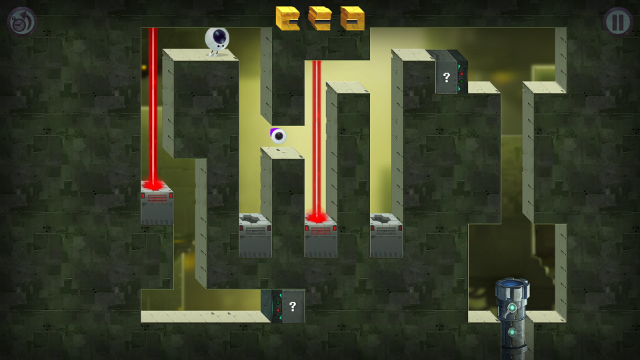 A rare twitch-based exception to the rule.

Tetrobot and Co. is also clever, in the sense that the writing is pretty sharp. The larger ‘backstory’ — of the girl, Maya, discovering pictures of her life in the Tetrobot cores and letters of her mentors — is serviceable, but ultimately largely forgettable. The real wit is in the little logbook level descriptions, in the FaceBlox-blurbs, and in the level names. ‘Mirror’s Edges’, ‘Tobohcysp’, ‘A Song Of Wood And Fire’… 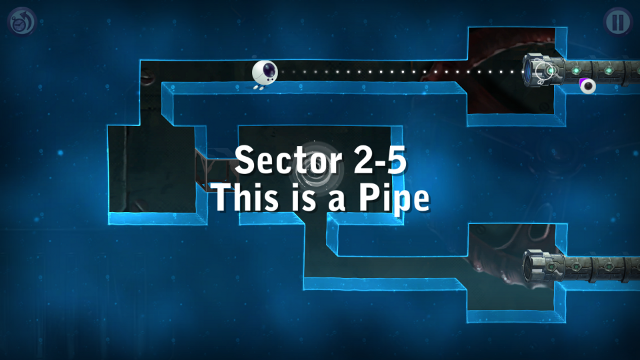 I guess this answers the question I posited in the introduction.

And have I mentioned yet that Tetrobot and Co. looks and sounds nice? The graphics are crisp and consistent, and the level-set-specific tunes do a good job of conveying the different atmospheres within the different robots.

Tetrobot and Co. has clever puzzle design that stays fresh, a naturally adaptable difficulty curve that allows players of many skill levels to find their own path, clever writing, good flow, and nice aesthetics. It… it’s a good game, you guys. That’s what I’m trying to convey. I don’t really know what else to say about it.

Tetrobot and Co. has been open for almost an hour now, a repository of easy-grab screenshots for ease of writing. I can hear its tunes quietly beeping out of my out-of-reach headset. It’s late now, almost 11 PM, and I should be going to bed soon. I am definitely going to play a few more puzzles before the day is over.

If you’re looking for a clever, well-designed puzzle game with an interesting aesthetic, I highly recommend Tetrobot and Co.. It’s really good, a great example of what the puzzle game genre has to offer, simple and forgiving and balls-hard and incredibly devious at the same time. And it’s only ten bucks or so on Steam, to boot.

And as a bonus, it’s apparently highly related to Blocks That Matter, a game actually starring the titular Tetrobot from the same development studio. And a game I own on Steam, somehow. I can’t for sure say that having played either game enhances the experience of playing the other, but I intend to find out.