This week, the game we’ll be taking a look at is Swing Swing Submarine‘s Tetrobot and Co., a game that has a period in the title. You can imagine how much fun that is for sentence construction. Try it for yourself. Say ‘Today, I played Tetrobot and Co.‘. Doesn’t work very well, does it?

…No, wait, it actually does work in that particular example. Damnit, I failed at failing. Why does this always happen?

Also, I got this game somewhere — Steam, I’m fairly certain — and for some reason, and I couldn’t tell you what that reason was anymore if I tried. Impulse purchase? Sure, let’s go with that.

Hello, what’s this? Individual player profiles? On floppy disks? If the nineties had a phone capable of calling to the future… well, I assume they’d be using it for a lot of things that are entirely unrelated to this game. And it wouldn’t make much sense for them to ask for their data carriers back, since these are digital images of floppies that are, in fact, not real. The nineties had heard of Rene Magritte before, right? 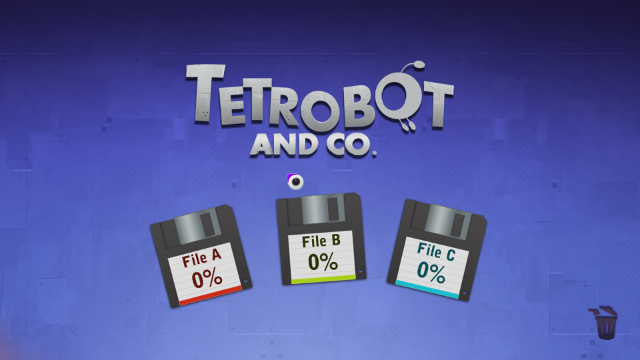 The time is fast approaching that people will no longer understand this visual metaphor.

Tetrobot and Co.’s main title screen is interesting. There’s another floppy disk, a power button, a gear button, a giant play button… my attention is quickly drawn to an arrow in the top right corner, in no small part due to the tiny hard-hatted cyclopean robot sporting a bright yellow exclamation mark. 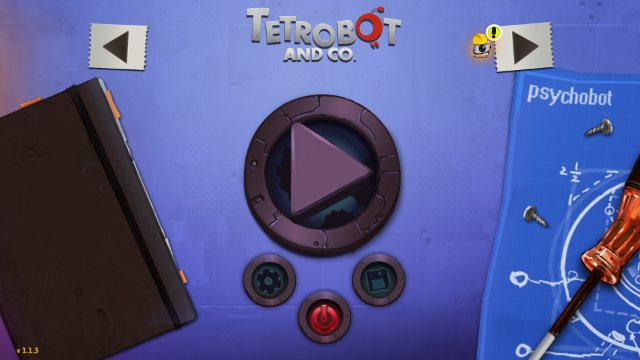 What’s up with you, tiny robot? What are you all about?

Oddly, Hard-Hat-Bot’s arrow button seems to take me to… I have no idea, actually. Is that a level creator? It certainly looks like a level creator. Explanations are sparse, however. And why would a game want me to see the level creator first and foremost? Because that’s what a bright exclamation mark button is going to do. 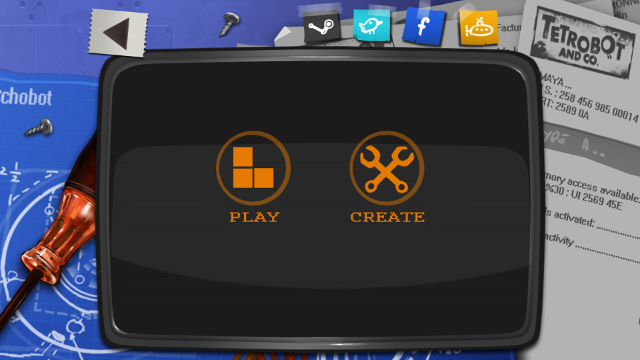 “The ‘Create’ button seemed like a dead giveaway, but I remained unconvinced. I’d been conned before.”

I click around a little, but find I can make nothing of any interest happen. Dejected, I return back to the main menu. Maybe one day, hat-bot.

Tetrobot and Co.’s options are alright. Nothing to complain about, nothing to write home about. Your basic stuff: some graphics options, some audio options, some language options, some controls options (aimed at rebinding controller bindings). A few empty pages in the Options book, likely corresponding to achievements… and pictures and music? Is that right? And then there’s an interestingly abstract how-to-play section, which seems like it’s telling me less than nothing. 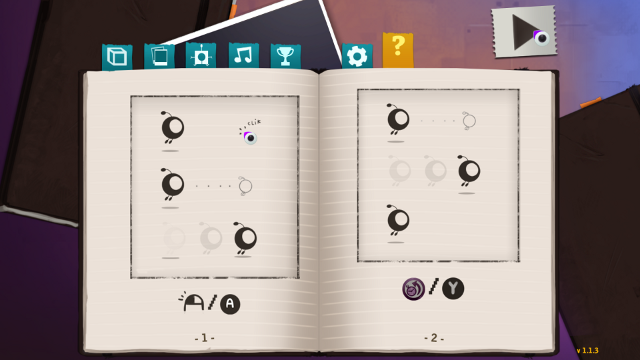 I guess you… you *do* stuff? And then stuff happens?

While Tetrobot and Co. clanking-and-whirring-and-beeping menu soundtrack is alright enough, I feel like I should probably get to business by now. I click the giant Play button — why I didn’t just open with that, I’ll never know — and find myself treated to a large conveyor belt. On it, a movie reel, a box half-taped shut, and a golden something. 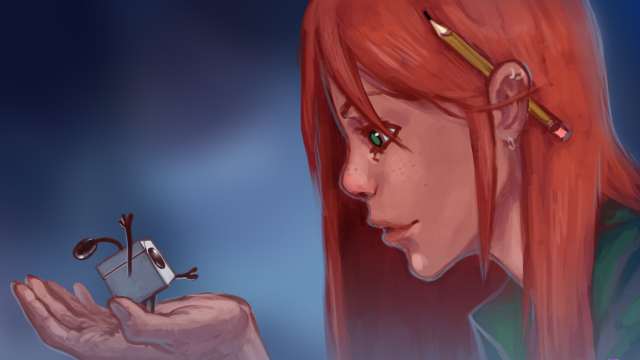 Seriously though, that robot is small.

The box on the conveyor belt contains… the tiny square robot. It looks unwell. 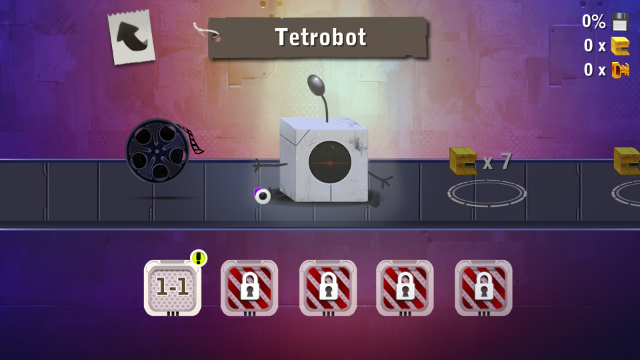 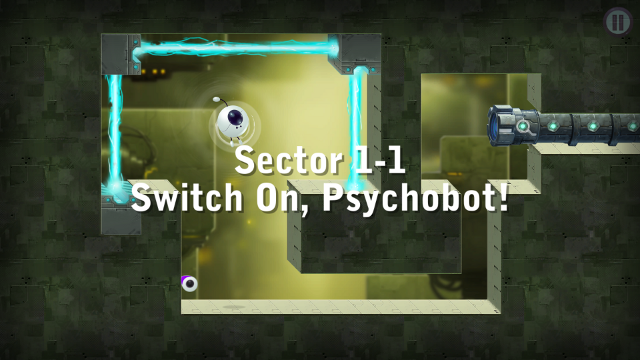 Well. This at least answers two of my questions: one, the little orb robot is called ‘Psychobot’ — assumedly the titular Tetrobot is the larger square one it’s in right now — and two, I control this Psychobot. Both aspects also immediately raise more questions, but we’ll let that slide for now.

Step one: how do I do anything? I remember from the how-to-play that clicking was apparently involved, so I click some distance under where Psychobot floats. 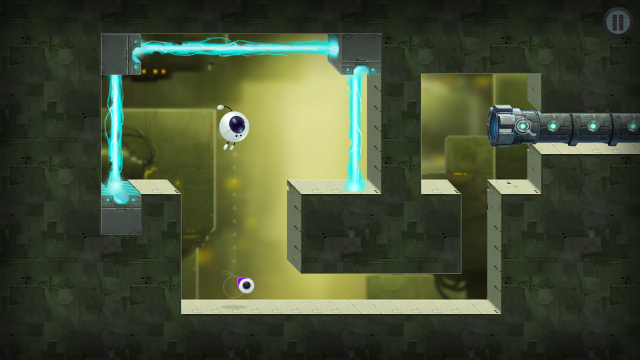 …and Psychobot rushes to fill it. 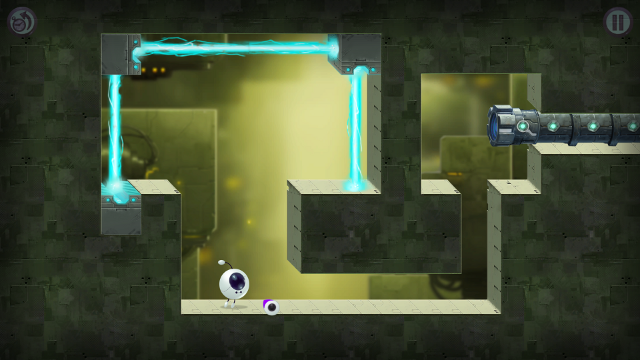 Alright, that’s clear. So if I click on that massive pipe on the right… 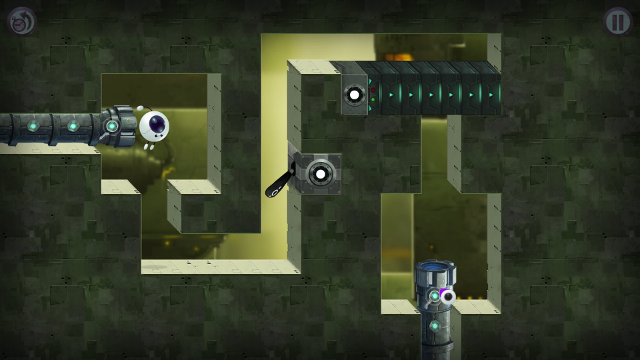 Clear as sunlight. Now what do we have here?

A lever, huh? A level with a circle icon, and what appears to be a retractable wall with a similar circle icon. I wonder what happens if I pull my Psycho-body over that lever. 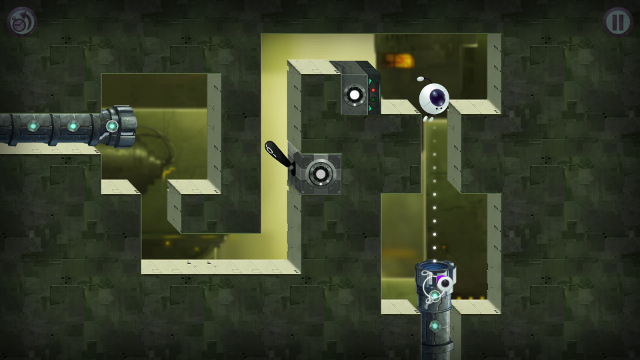 Two rooms over, I’m my suspicions are confirmed: it’s the icons that tie levers and obstacles together. Which means levers can be in one room, and the actual obstacle in the next. A handy graphic effect flies from the lever to the element it’s controlling, but beyond that, I can see a lot of mental mapping going on here.

A few rooms after that, I run into a… a thing? A golden block, of sorts. I remember seeing these things on the level-select conveyor belt, blocking access to later levels. 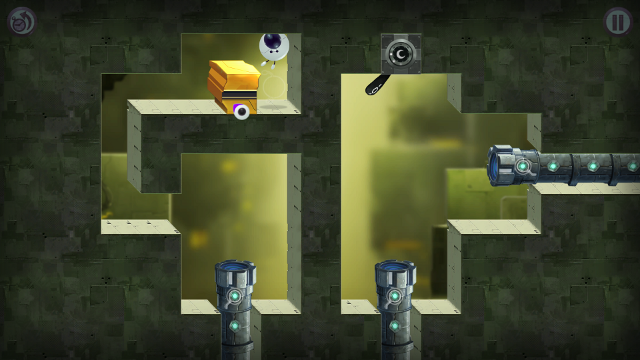 Hello, golden thing. Are you and I going to be friends?

Doing so unlocks an entry in something called ‘FaceBlox’, just because. 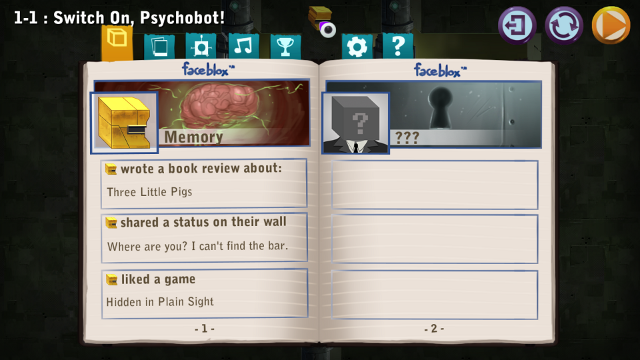 Biting social satire of the highest order, ladies and gentlemen.

I’ve seen more of those golden blocks around the level, actually. One in a difficult-to-reach spot, and one right here, next to what I assume is the level exit. I think I could bail right now, without collecting the other two? 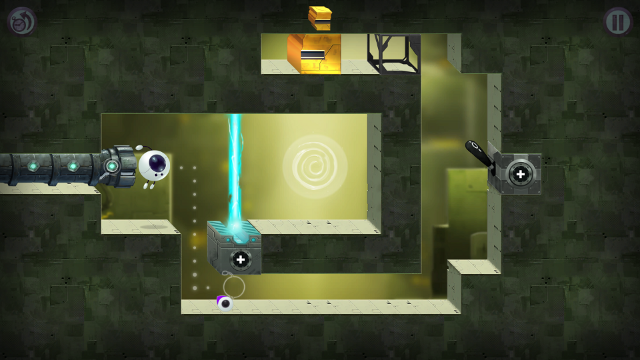 “I *could* just leave this easily accessible magical golden block behind, forever.”

I grab the one golden block, flip the switch that disables a much earlier laser, go back to get the other one — it’s a puzzle game, you don’t want me to describe how I do things in too much detail — and fly into the swirly portal, ending the level.

The end-of-level-screen shows the three golden blocks I collected fusing together into a single golden bar. Score one for Psychobot! I obtain the desired ‘approved’ stamp, and the coveted ‘perfect’ stamp as well! 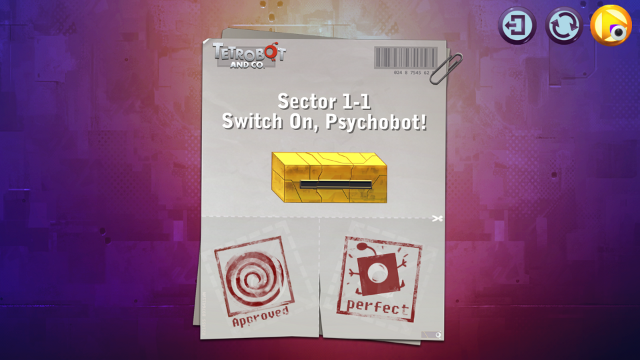 No word on my Arstotzka entry forms, but hey.

Alright, so is this Tetrobot and Co.? Fly around, flip switches, collect golden blocks, be cool?

No, of course it isn’t. As level 1-2 shows, Psychobot’s block-absorbing capabilities are not just reserved for golden blocks of cool: this power works equally well on the wooden blocks I encounter next.

Wooden blocks, yes. Inside a tiny square robot. Don’t think about it too much, okay.

The wooden blocks seem attached to one another. I absorb a middle one, and the bottom one succumbs to gravity’s cruel embrace. 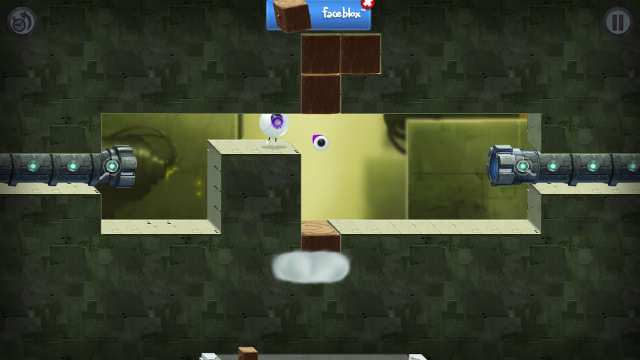 Not 100% sure why it didn’t just fall before, but that’s Tetrobot physics for ya.

The next few rooms are spent learning about wooden blocks: their ins, their outs, their strengths, their weaknesses. I learn that wooden blocks stick together, that they fall unless supported, that they stop lightning blasts, but they are absorbed from my internal storage unit by weird purple matter absorbers. 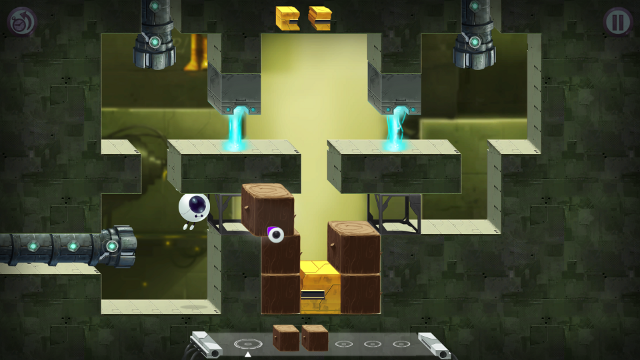 I also learn that puzzles involving wooden blocks can be tricky. Luckily, there’s a reset button in the top left corner that takes me back a few seconds per click.

Wait, internal storage? Yes, internal storage: level 1-3 introduces the idea that I cannot only absorb wooden blocks, but also expel them. By dragging blocks out of the storage bar at the bottom and onto the screen, Psychobot can project them in straight horizontal lines in either direction. The block then flies straight until it hits an obstacle, at which point it accedes to Wiley E. Coyote-physics and starts obeying gravity again. Unless said obstacle is another wooden block, in which case they’ll stick together again. 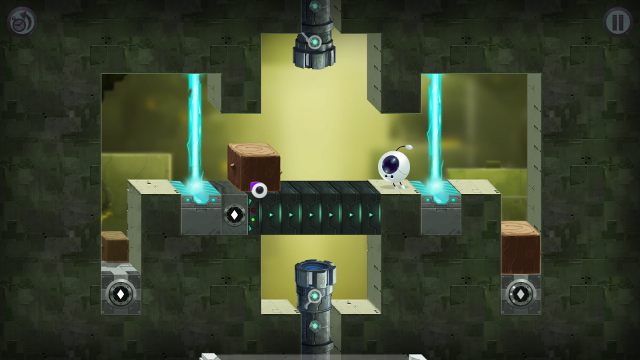 Not pictured: sensors that only activate when I put Psychobot on them.

Wooden blocks stick to wooden blocks, and trigger wooden block sensors. Wooden blocks don’t really have a lot going on with sand blocks, which… which primarily beg the question of what this tiny square robot has been doing all this time. Robot, why is there so much wood and sand inside you? Are you a Minecraft player? 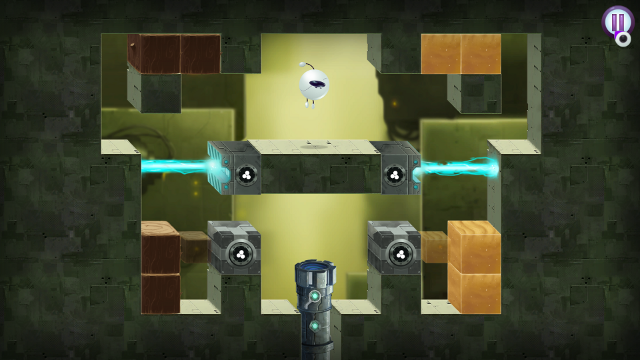 Uh-oh, I left Psychobot alone for too long and now he’s falling asleep! 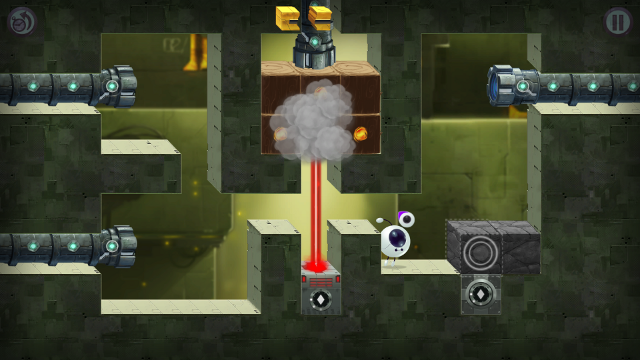 Stone and lasers and pipes and FIRE!

And putting blocks in the right places! 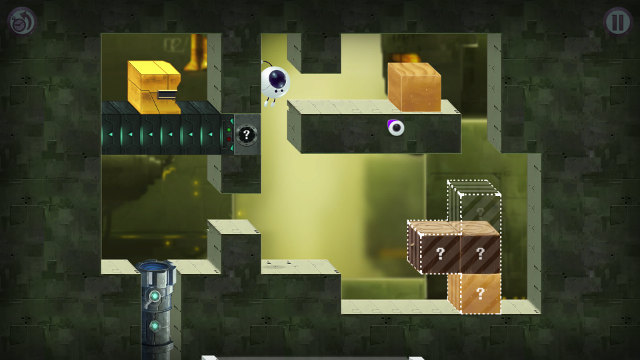 Because that is a thing I do, apparently!

Sometimes a little creatively, too. 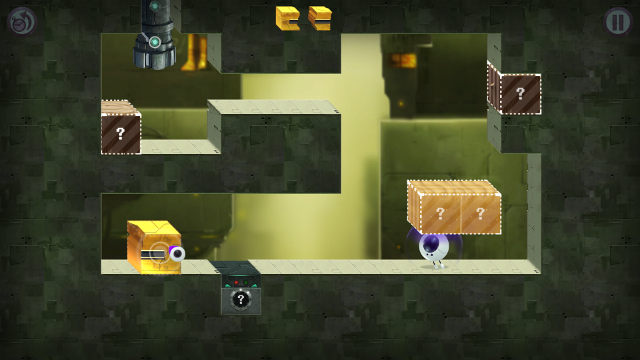 I complete five levels this way. Between levels, I’m sometimes rewarded with pictures and backstory about the red-headed girl, Maya. However, my real reward after completing 1-5 is fixing the little square Tetrobot! All its memory cores now intact — because that is what the gold blocks are, apparently: memory cores — it once again whirrs to a mechanical semblance of life. My work here is done. 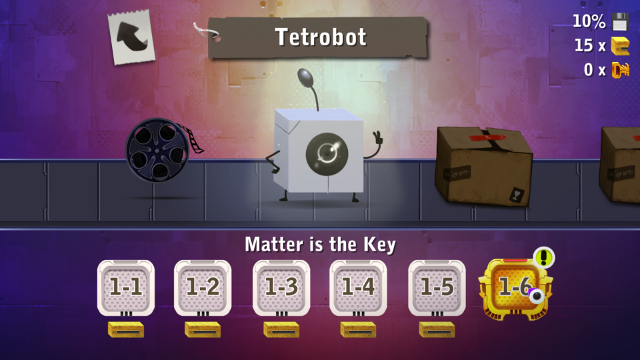 Right after I complete this optional level, which taunts me with a giant key. 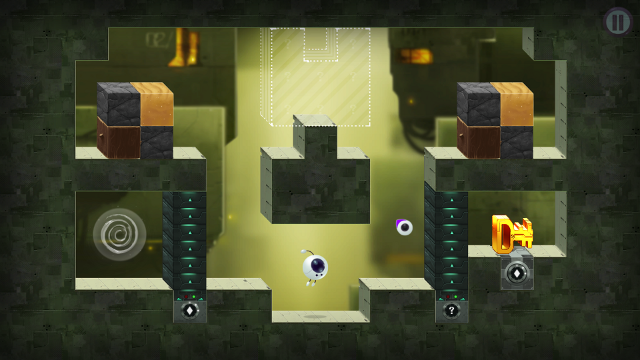 Okay, but seriously: I’ve been skimming over the details a bit, because — again — Tetrobot and Co. is a puzzle game, and I don’t want to spoil the initial experience too much. But from relatively simple openings flying around and flipping switches, this game has ramped up the mechanical complexity really rather fast! Different block types that I can absorb and move, that stick to each other but not to others, and that interact with environmental obstacles in different ways… and that’s only robot 1.

Robot 2, Watabot, looks waterlogged. Who dunks a robot in a fish bowl? But their loss is my gain: It’s obvious this robot is going to add water into the mix, and I’m looking forward to seeing how that element will change up the proceedings. 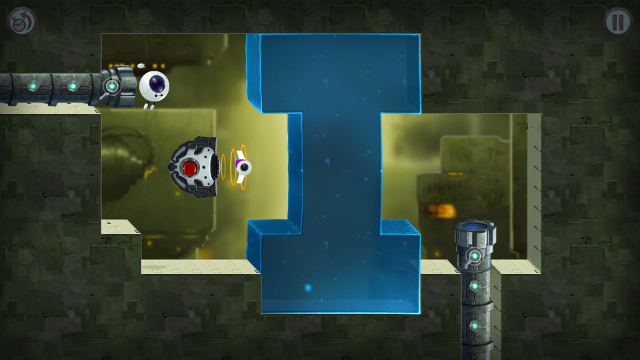 Not in the way you’d expect.

See you again when I fix Watabot!