I taught Steve how to dance, after all. 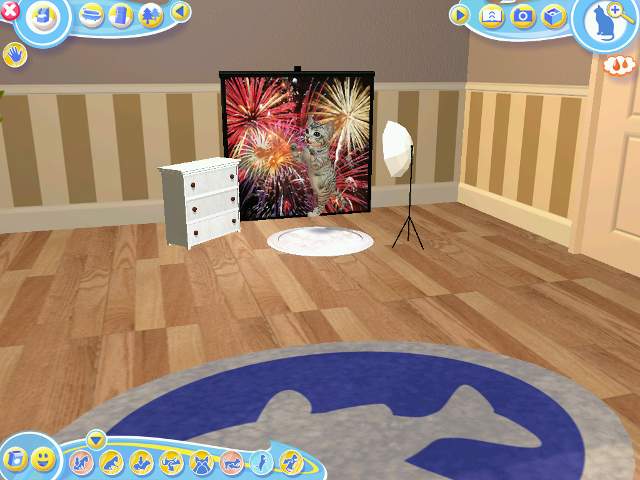 For a certain interpretation of ‘dance’.

More to the point, I spent a few more days with Petz Catz 2. I hung out with Steve, playing fetch and tag and teaching tricks and brushing and bathing and feeding, and generally rubbing his little head all the time. Not to mention unlocking a whole mess of stuff. I also adopted a second cat, a beautiful black-haired Maine Coon named Janna, in the hopes of having two adorable kittens running around my empty ghost house.

Alas, though: Petz Catz 2 only allows one kitten at a time. 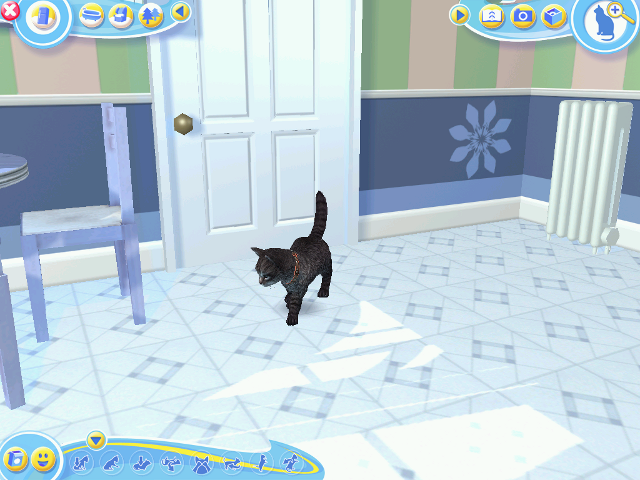 Which is too bad, because look at how gorgeous this cat is!

Over those few days, I’ve come to a closer understanding of what Petz Catz 2 represents. I understand now that a lot of my initial verbal frippery about this game came from the fact that I misinterpreted its intentions: I approached Petz Catz 2 as though it intended to represent an accurate picture — or at least semi-accurate picture — of taking care of a young kitten.

That’s not what it is, obviously. Obviously. The Z should really have tipped me off. What Petz Catz 2 actually represents is the childlike fantasy of owning a pet.

Think about it. Just you, and a perpetually young kitten, in an otherwise empty house entirely reduced to the three rooms you need to care for it. No other people to monopolize its or your time, no annoying siblings, no chores. The house never gets dirty, it’s never noisy, and it becomes more interesting and fanciful just by playing with your kitten!

And the kitten itself is always friendly, fluffy, docile and biddable. It doesn’t scratch, it doesn’t shed, it doesn’t grump. It’s always energetic, and happy to see you, and its only activities and interests revolve around being near you all the time. It comes when you call, always, 100% of the time. It’ll play with you, and it’ll do tricks, even though it’s a kitten! Have you ever wanted a kitten that does tricks like a puppy? Here you go!

Yes, you do have to take care of it. But getting it food and water is incredibly simple, and even cleaning up the litterbox doesn’t take more than a single mouse click. 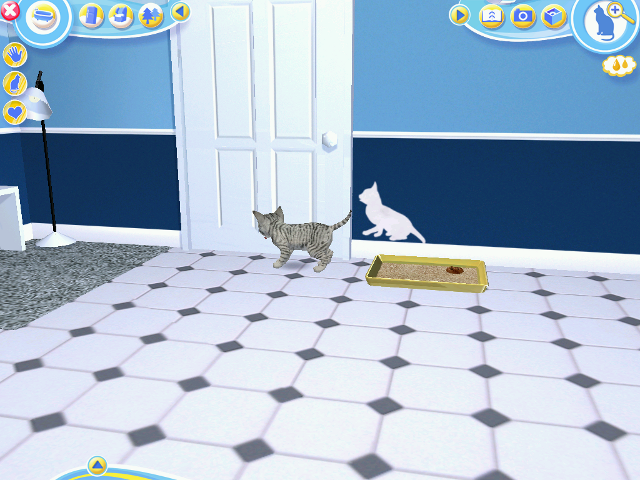 It doesn’t even smell bad this way.

The fantasy level reaches some outlandish heights pretty soon. Bathing your kitten with a sponge and a showerhead? Look forward to two arms full of scratches in real life, but in Petz Catz 2, your cat will happily jump into the tub, stand still while you rinse it, and purr in appreciation afterwards. Brushing your kitten doesn’t require chasing it all over the house and holding it down.

And to top it all off, you can play pretty princess dressup with your kitten. You can change and paint its fur, and give it hats, boots, collars and even tail pom-poms. 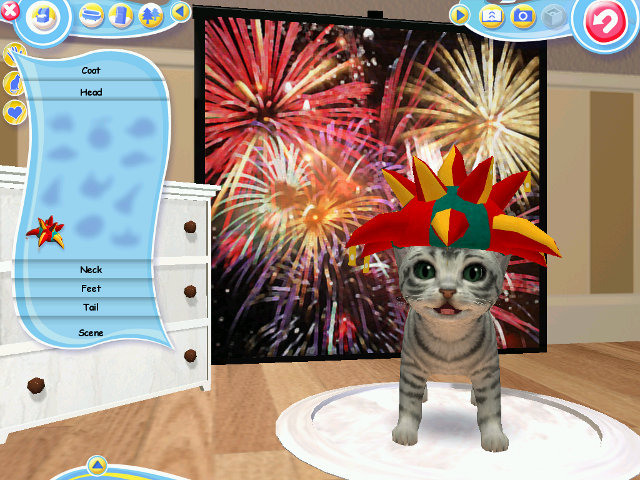 Which, you know, I’d poke fun at, but the results of this are occasionally amazing. 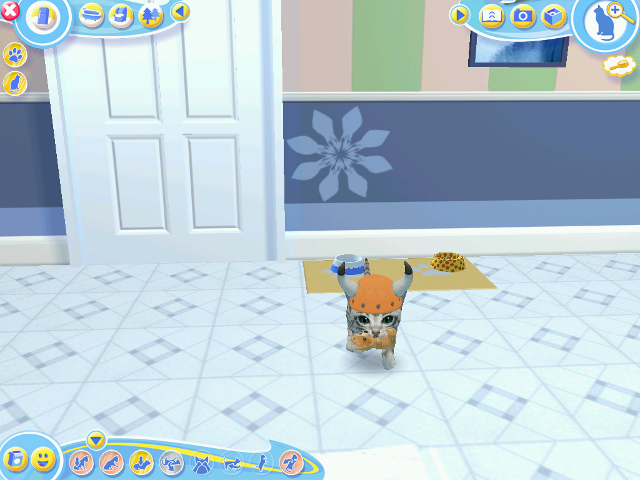 Given that Petz Catz 2 is clearly aimed at a demographic about fifteen years my junior, I’m hard-pressed to say anything really critical about it. It’s a game about pretending you have a perfect and amazing kitten. And… it does that well, I suppose?

The virtual kittens do look pretty good, which I suppose is a major point. They’re animated fairly well, and they move around in a visually convincing manner. They even jump up tables and sinks to sit there and stare at you, so a point could be made for the cat-like accuracy of their behaviour in certain aspects. 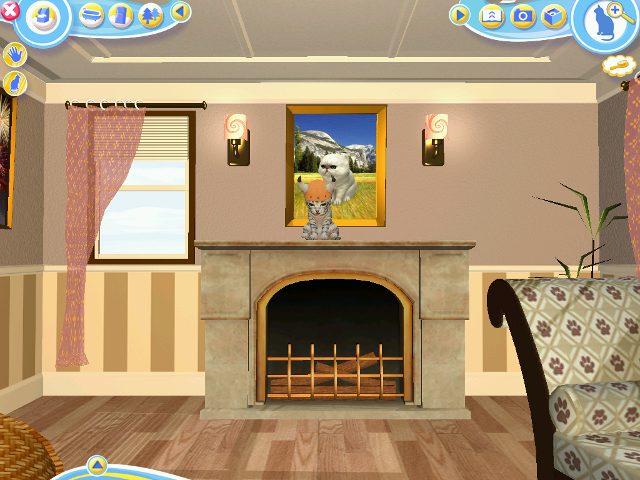 “Dovahkitten rules all he surveys!”

They sound less like kittens and more like someone doing a hilarious kitten impersonation, but I can’t tell if that’s because the voice work was done by an intern or because little kittens just sound weird. It’s been a while since I spent any time around kittens, okay. And I know for a fact animal sounds can be weird as all hell.

With regards to gameplay… on the one hand, it’s obviously simple. Strictly on an interaction level, we’re talking point-and-click-adventure levels of complexity: click on the cat food bag, then click on the food bowl. Click on the brush, then click and drag over the cat repeatedly. Even the tricks, which are a little more involved — not to mention a clear mechanical re-use from the Petz Dogz games, up to and including the doggie treats you give your kitten — follow this pattern: click on this part of the cat, click and drag this way, and presto! Catflip.

Interestingly, on the other hand, Petz Catz 2 has a semi-random cycling system of optional objectives that wouldn’t go amiss in most modern games. Up to three of these objectives are displayed at a time, chosen from a number of categories: playing with your cat, taking pictures of your cat, teaching your cat tricks, and being nice to your cat. 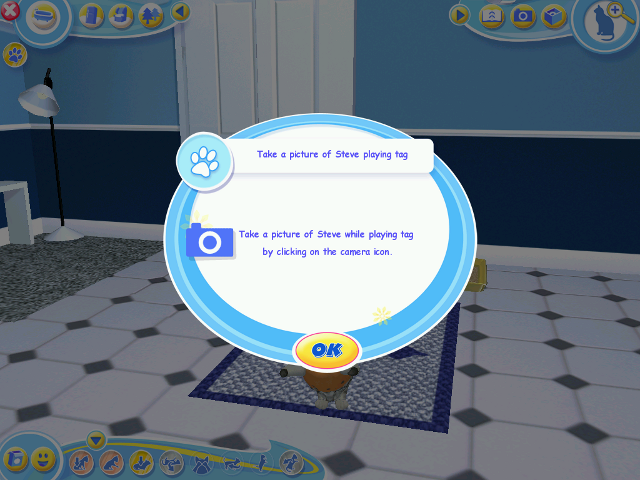 For example: play tag with your cat, then take a picture! This is a sensible thing that real people do.

Completing these objectives rewards you with customization options for your kitten — hats, boots, collars, pom-poms, and even new fur types — as well as with new cat toys and even visual improvements to your house. And it’s… actually a pretty effective system to keep players engaged? I mean, as long as you’re on-board with the whole pet fantasy thing anyway, a continually updating system of rewards for doing the sorts of things you’d want to do anyway seems like a pretty good source of extrinsic motivation.

Some of them are even quite challenging! For instance, one objective told me to ‘not let Steve’s needs drop from orange level to red for ten minutes’. Which is harder than it sounds, because Steve will not use the litterbox. Seriously! He’ll just mull around in the bathroom, begging for attention and playing tag with me, while his ‘I really need to go’ indicator goes from orange, to red, to critical red. And then the game blames me for not taking care of him! 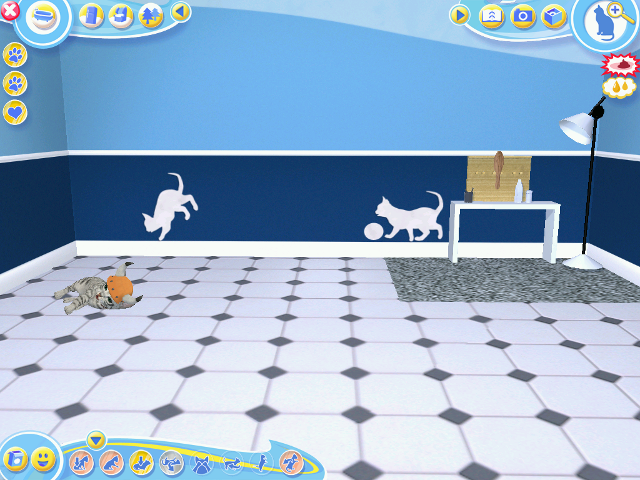 Steve! Steve, you’re about to shit your non-existing cat pants! Stop lying around like a doofus!

And while you can get ‘medals’ for teaching your cat tricks — bronze, silver and gold — those don’t really signify anything other than that you’ve clicked the button a requisite number of times. And maybe that you’ve applied positive reinforcement in the correct way? The game seems to hint at the importance of kitten treats and head pats, but I can’t be sure whether or not that’s just extraneous. 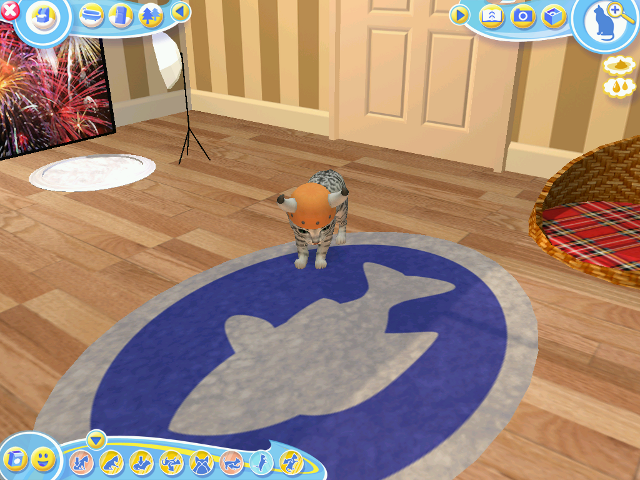 They *are* good for bragging, though.

So I guess what I’m really saying is that whether or not you’ll enjoy playing Petz Catz 2 is primarily dependent on how easily you’re swayed by cute digital kittens doing cute digital kitten things. It does have the other hooks, the objectives and the customization and the area visualization, which set it apart as a game with at least some fairly decent designers at the helm. But at the end of the day, Petz Catz 2’s major draw is in stuff like this: 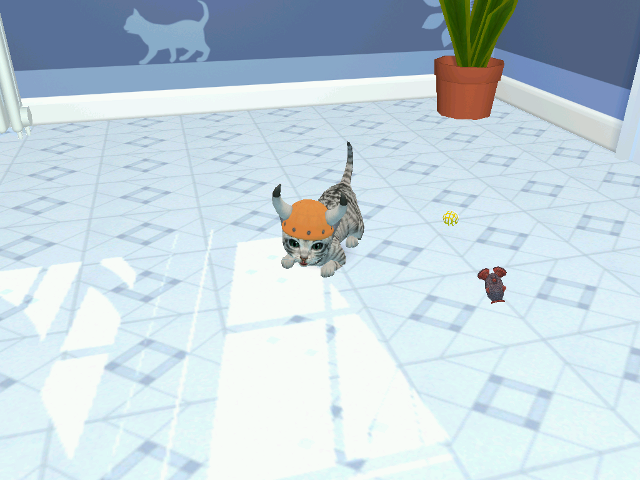 There’s nothing left for me to say here. Whoops! I suppose I could say something about how the background music is serviceable, but repetitive? Or that Petz Catz 2 does have graphics and audio options, changing the resolution to anything but 1024×768 crashes the game immediately? Or maybe I could interject a witty observation about the ‘park’ area being a desolate grass square, devoid of other life, with a chain-link fence that would never keep a real cat in and a sandbox I would never let my children play in, ever. 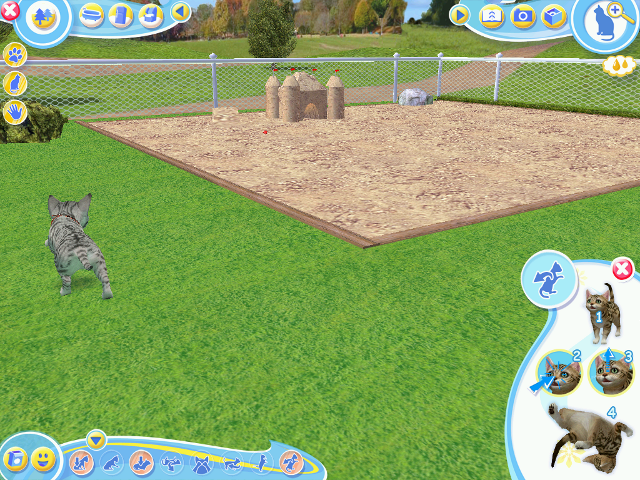 I could do all that. Or I could link another picture of Steve being cute. 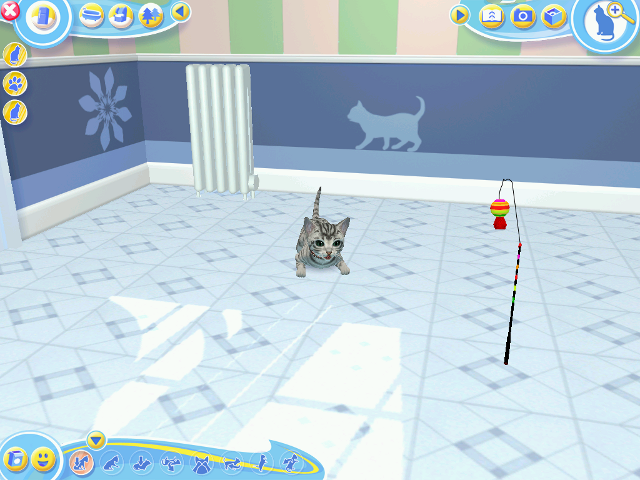 Petz Catz 2 is basically a Random Cute Cat Moments Generator. It does what it does well, and I credit it for trying to have interesting gameplay hooks. But at the end of the day, it is no more and no less than what it is: an excuse for children and particularly odd grownups to swoon over digital kittens.

Which actually makes it a pretty useful piece of software! I can’t have kittens where I live, for reasons of space and landlord rules, so Petz Catz 2 is the closest I’ve been in months to owning my own actual cat. For that alone, I consider my time spent with it a worthwhile investment.

But at the same time, there’s a decent chance I may or may not ever boot it up ever again after this review is over. Steve, you be good while I’m gone, alright? Be a good kitty. Look after your little sister for me. 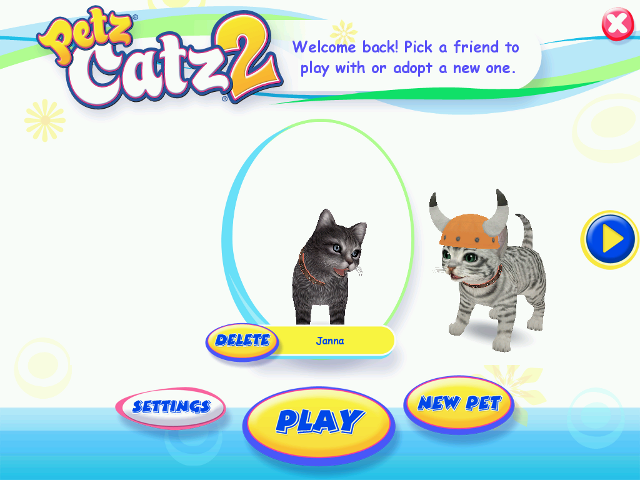 I taught Steve ‘open the luxurious water fridge’ as a trick. He’ll be fine.

Petz Catz 2’s going rate is about five bucks on Steam. If you’ve ever wanted to teach a kitten to do backflips from a standing position, it’s probably worth that much money. 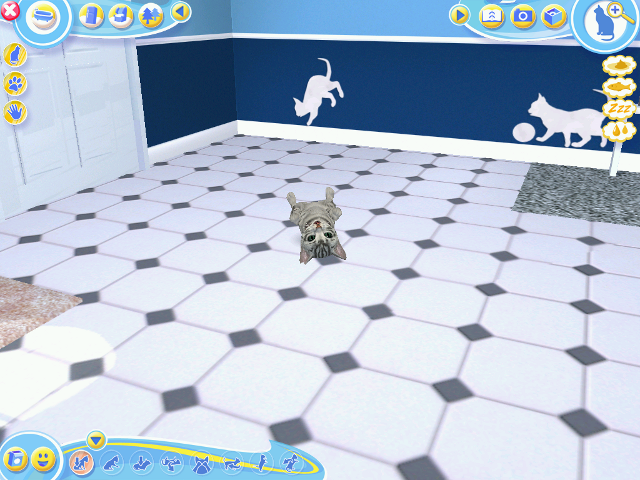 Okay, last one, I swear.