So, I played some Plus mode rymdkapsel. It’s a lot like Normal mode, except with different monoliths. And more difficult, too: Normal mode gets you [wave number]/2 enemies per wave, but Plus mode just makes it [wave number]. Suffice it to say it gets busy in your space-space, fast. 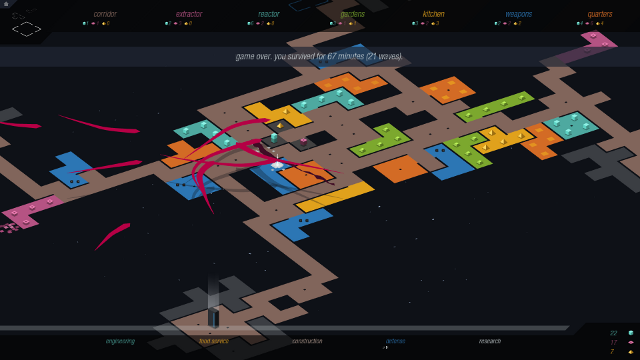 Plus mode doesn’t mess around.

Still, considering this was my second-ever game, I like to think I did pretty alright! I got to all the monoliths before my untimely death, earning me another mission achievement and a warm, tingly sense of satisfaction.

Using this new-found knowledge, I jumped back into Normal mode, where I managed to survive a whopping 29 rounds before getting killed. 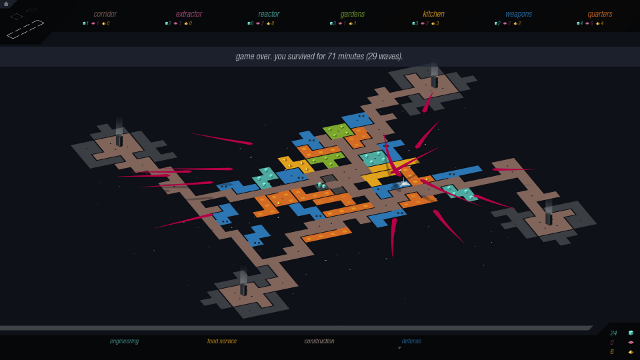 *And* I barely avoided making my space-station into a somewhat *compromising* shape. Everyone wins!

Now, I know what you’re thinking: 29 rounds in Normal mode should be equivalent in difficulty to about 15 rounds in Plus mode, right? Why would doing worse be something to be proud of? But here’s what you’re overlooking: waves don’t just get more difficult as time passes, they also arrive sooner and sooner. And while surviving earlier waves casualty-free is definitely possible, later waves and the tendency of enemies to cluster will almost always kill one or two of your minions per attack. And you can replenish lost minions… but that takes time.

But now I’m getting ahead of myself. The summary is this: I’ve played three games of rymdkapsel so far. All three games were interesting, and pretty fun to play, but… at the same time, I don’t really feel any mental pressure to go back? rymdkapsel is a very interesting game, with a cool design aesthetic and a (seemingly) deliberately minimalistic set of mechanic, but simultaneously it doesn’t seem to have much in the way of replayability beyond the first two, three games.

This is normally the part of the review where I go more in-depth on each of the points I’ve touched upon, but in this case I don’t really know what more there is to say. rymdkapsel’s aesthetic qualities are pretty self-evident at this point, I hope: 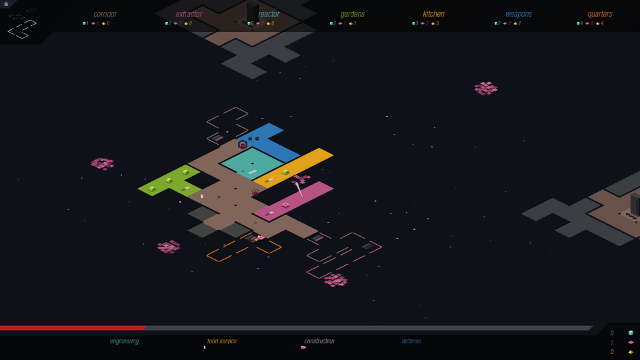 Have this random mood shot.

Sound design is a little harder to convey in screenshots, but rymdkapsel’s main musical theme is an appropriately out-of-this-world theme that pervades the whole game. Most sound effects are simple, but distinct enough that they’re useful as information carriers: the blips of minions picking up resources, the whizz of a room being completed, the sweeping pitch of research being done, and the screeching alarm clock siren that warns you of approaching enemy waves.

What I personally particularly like about rymdkapsel’s audiovisual setup is how little overt textual cues it uses. Apart from the tutorial, the only part of the game where reading ability is required is in reading which monoliths do what. Beyond that, every piece of important information is conveyed in sound and/or in colour. If you’ll forgive me for dragging my little-seen work interests into this gaming column for a bit, rymdkapsel might be one of the most inclusive games I’ve seen in a while. 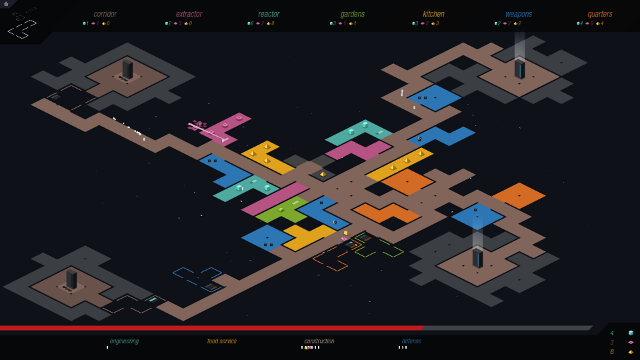 Explain people the basic controls, and you could play this game without *any* reading ability.

Mechanically, rymdkapsel is… I’m going to say both interestingly minimalistic, and disappointingly so. On the one hand, it’s an intriguing case study into the bare-bones necessities of the manager-builder genre of games. On the other…

rymdkapsel is, as far as the aesthetics and the name give any clue, a game about building and maintaining a space station. But at a far cry from genre-contemporaries like Startopia and the upcoming Spacebase DF9, rymdkapsel takes a very low-complexity, almost hands-off approach to its gameplay. Yes, you collect resources. But your actual involvement in the resource collection doesn’t extend far beyond placing the tetromino buildings. Yes, you assign minions to tasks. You can’t micromanage their occasionally idiotic behaviour beyond dragging them from tab to tab, however. And yes, you have to make long-term strategic decisions. It’s just a shame you don’t make a whole lot of them. 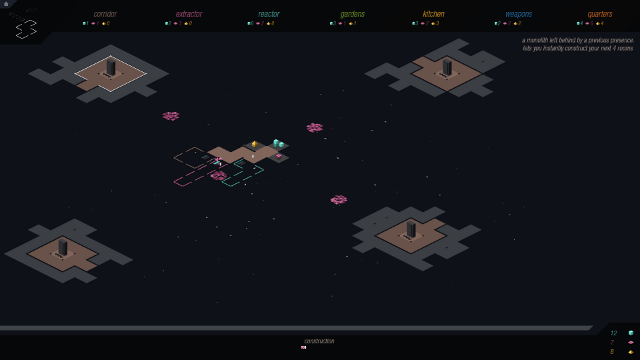 The simplicity of the resource collection doesn’t actually bother me. I might actually be underselling the importance of the building placement element, the way I presented it just now: proper building placement is absolutely vital to a successful base. In theory, you can get by with just one power generator, one sludge farm and one kitchen. But in practice, minions dragging power cubes all over your base will represent a massive time drain, your one sludge farm will be empty almost all the time, and your one kitchen only allows for a meager stockpile of food pyramids. And how about the distance between sludge farms and kitchens? And the particle fields extractors use actually run out after a while. Do you rush for the more outlying fields? Do you place one extractor near a field for longevity, or multiple extractors for speed? What are the best weapon room places for maximum overlap? And where do your quarters fit into all of this? 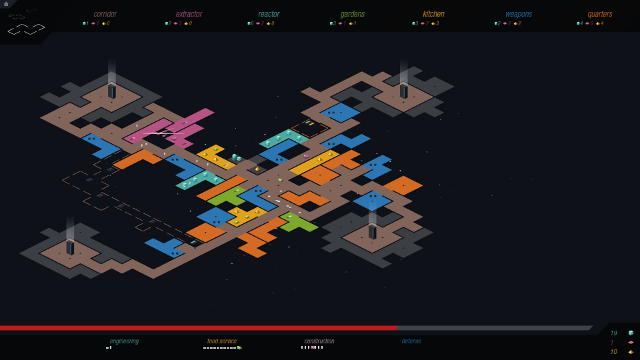 It turns out quarters actually fit most everywhere.

This initial complexity of planning and decision making tapers off the further you get into rymdkapsel, though. When all particle fields have been colonized and all monoliths have been connected, a lot of the mechanics simply stop mattering as much as they once did. As late-game rymdkapsel is all about surviving the ever-harder, ever-faster enemy waves, matters of material, power and research quickly lose relevance to weapon chamber placement and food supply maintenance: ‘Do I have enough defense space for all my minions to safely fit in’ and ‘do I have enough food to replenish losses before the next wave’ to the exclusion of everything else. 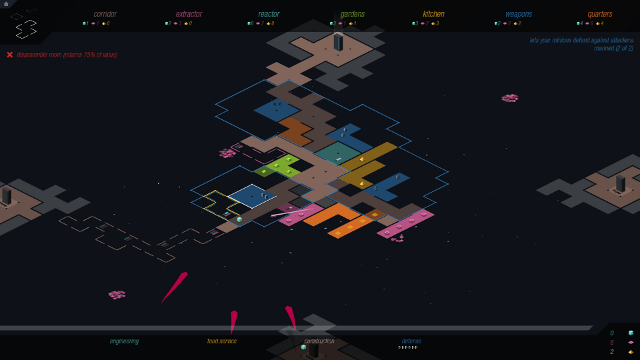 Weapon chambers can’t actually overlap too closely. So where to place these things, and how, is a major strategic determinant later on.

The minion allocation system’s quirks are a little more damning. At first, as with the rooms system, the low-complexity hands-off nature of assigning minions to jobs seems to fit rymdkapsel’s style pretty well. And it works, initially. However… I can’t speak for every player, of course, but for me, it quickly became apparent and annoying that this system is rather dumb.

You reassign minions by dragging them from tab to tab, fine. Or rather, you don’t actually assign individual minions: you drag ‘a quantity corresponding to one minion’ from one job to another, and the game selects for itself which of the minions currently in job A should go to job B.

Also, as a side note: you can move minions more quickly between two chosen tabs by dragging one minion from A to B, then repeatedly clicking in B. This is an absolute wrist-saver later on, when you need to move large amounts of minions between jobs quickly, and I don’t think rymdkapsel actually ever told me this. Consider this my gift to you.

So you drag minion quantities from job to job as a method of changing job assignments. In rymdkapsel’s defense, it does know to pick unencumbered minions for this change first.

In rymdkapsel’s offense — is that a phrase? That should be a phrase, opposite ‘in defense’. Anyway, in rymdkapsel’s offense, there doesn’t seem to be a whole lot of intelligence behind the switching process beyond ‘pick a minion what’s not carrying stuff’. And this can lead to some truly cringe-worthy awful behaviour. 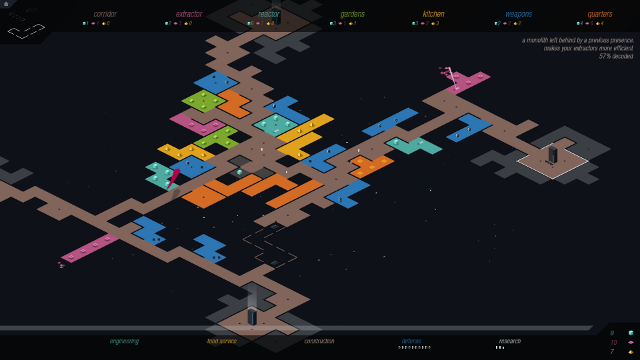 ‘Move three guys from defense to research.’ ‘Okay!’ ‘Will you pick the three guys nearest the monolith, who would have to walk for the shortest amount of time?’ ‘Nah, that’s not how I roll.’

Minion job assignation is truly random. In the early stages, this is noticeable but not particularly annoying. But in the later wave, where every second counts, it would be really helpful if the minions I switch from defense to food service are the ones right next to the goddamn kitchen, no, not the guys all the way at the outskirts, goddamnit they’ll have to walk for like a minute! And hey, here’s the next attack wave, and I didn’t manage to replenish any dead guys.

The only way you can control minion behaviour is by way of prioritizing what buildings get constructed first. As in, you can prioritize one of them at a time. And credit where credit’s due: this system both works fairly well, and minions are clever enough to go do other things if you’re out of applicable resources or if the stuff they’re carrying isn’t needed anymore all of a sudden. Still, beyond that, you’re basically at the mercy of a fickle minion hive mind. The ‘ants’ comparison keeps coming up, huh?

Three times now, I lost from an apparent position of power because I just couldn’t get my losses back up in time. And three times now, I blame the random madness of the job changer. And also myself, because I probably suck at base design, but come on. 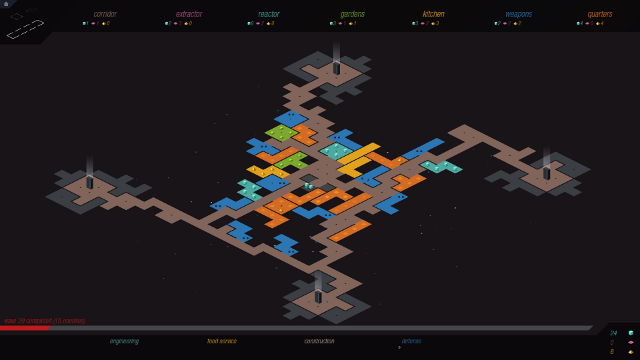 One guy left, wave 30, thirty seconds to work before the next wave hits. *I like those odds*.

And once you lose, you get nothing. No leaderboards, no high score, no commemorating your victory against hopeless entropic odds. ‘You survived this many waves, and this many minutes’. And hey, back to menu.

More even than a space base builder, rymdkapsel is a game about surviving ever-tougher enemy waves. How far can you get, how long can you last? Which makes it all the more baffling to me that it does nothing to commemorate your victories. I can understand a one-man studio leaving out global leaderboards and all that jazz… but right now, the only proof I have of clearing 29 waves is the screenshot I took, saying so.

Then again, I suppose Flappy Bird showed us that inter-human competition can spring up even in the sparsest of places. And I’ve already seen score comparisons happen in the one Steam Guide rymdkapsel had while I was playing it.

Oh, hey, look at that. There are actually Steam Leaderboards, both for wave-clearing and monolith-speed. Whew! Good thing I researched that on a whim. I guess I could delete the previous three paragraphs… but that’s not how I roll. Let them be on display, my ignorance showcased for all eternity.

Regardless: if you’re not a score chaser, though, rymdkapsel has relatively little to offer in terms of keeping your attention. There are seven missions in total, and three secret achievements that I don’t know anything about, and that’s it. Gameplay doesn’t change much, challenges and good strategies are basically similar from session to session, and as far as I can tell, even the monoliths are identical between maps. And I got all of those three missions in.

Normal mode is more score chasing, Plus mode is that moreso, and Zen mode — which takes the whole enemy aspect out altogether — actually has nothing at all for me. Do I have any reason to go back?

Turns out I didn’t! The notion of visible Steam Leaderboards does significantly add to the longevity of rymdkapsel for score chasers, but — with one clear exception — that’s never been me.

For people who aren’t into repeating high scores, rymdkapsel is aesthetically interesting, mechanically highly inclusive minimalistic space-station builder that will probably lose its appeal after a few successful games. At only seven bucks on Steam, I still consider it a worthwhile investment of money spent versus enjoyment. But… do be wary that it’s short-lasting, is all I’m trying to say.