rymdkapsel. What’s in a name, huh? My lupine friend Varewulf actually told me that ‘rymdkapsel’ is Swedish for ‘space capsule’, which makes a certain degree of sense: Grapefrukt‘s tenth and latest game does seem to take place in space. The story checks out.

Except it would, but I’m also Dutch. And while ‘rymd’ is meaningless to me, ‘kapsel’ is actually a word in my language. So for the remainder of this review, look forward to the many, many times I will be referring to rymdkapsel as ‘space haircut’.

(Spoiler levels: Narrative, none. Mechanical, quite high, so be careful.)

“RYMDKAPSEL”, a mechanical voice drones, mere moments after I launch rymdkapsel. Yes, voice, thank you. Thank you for reminding me what game I launched not ten seconds ago. 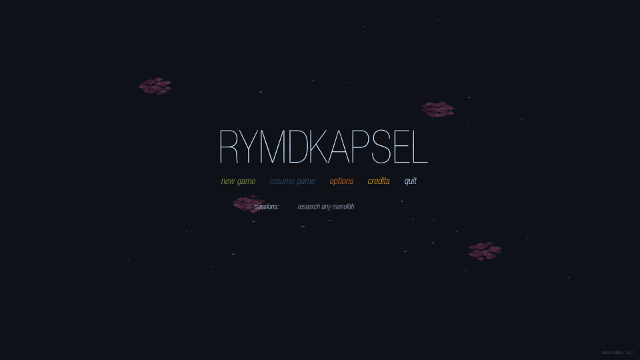 rymdkapsel’s opening screen is colourful, but sparse. I mean, what exactly am I looking at here? Space, I guess? And… there’s a bunch of pink cubes floating in space? Is that a thing that happens? I haven’t really kept up to date with space after Commander Hadfield made groundfall, so I don’t know. It could happen.

rymdkapsel’s not a fan of expansive options, I guess. Here: 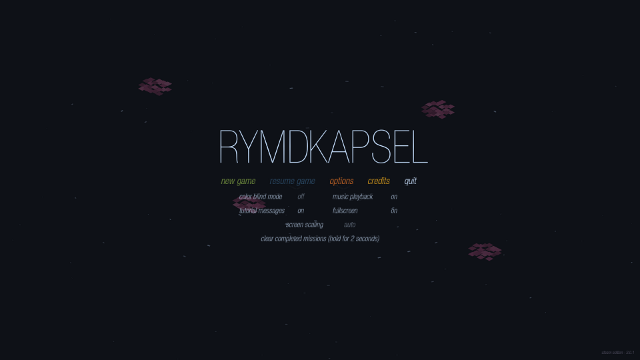 And these are the credits: 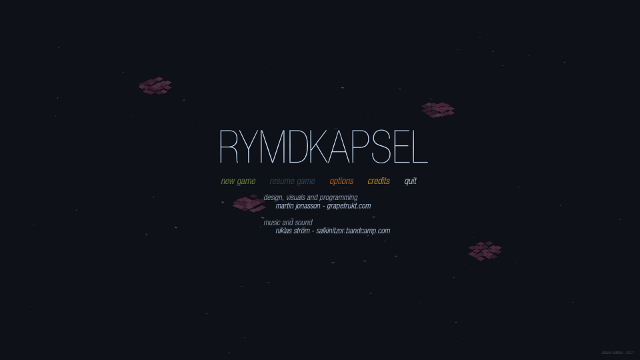 Might as well jump right into play then, huh?

Hidden under ‘New Game’ are three options: the solid hexagon-shaped Normal, the plus-onomatopoeia Plus, and the empty hexagon that is Zen. The latter two are… I want to say ‘grayed out’, but all three options are kinda gray? But the latter two are more grayed out than Normal, which is really more of a white. It’s also the only one that responds to my clicking, so it appears I don’t really have a lot of choice in the matter here.

I click Normal. The menu fades, to be replaced by a user interface and a welcome message. 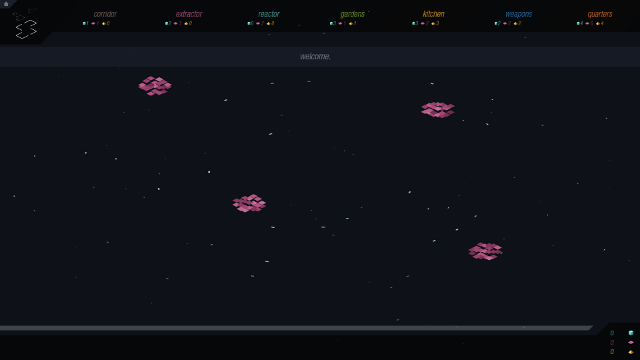 Haha, get it? ‘Welcome’ message?

The rest of it, space and pink squares and all, remains exactly th- no, wait! Something’s happening. Four squares appear in the middle of my screen: three gray, one brown, in a Tetris-T shape. Shapes of different colours stack up on the three gray squares, and two white rectangles bob up and down on the brown one. 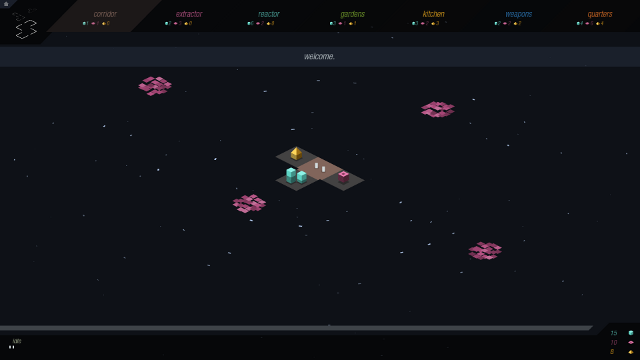 I hope to soon understand what to make of all of this.

“A good corridor network is the backbone of every station”, the top screen message tells me, putting brown-colour emphasis on the word ‘corridor’. I… hey, wait a second! I can see the word ‘corridor’, in the same shade of brown, in the upper UI bar. I wonder what’ll happen if…

I click the corridor button. My cursor changes into… what looks like another Tetris shape, the Z one this time, made of corridor-brown lines enclosed by a continuous red outline. 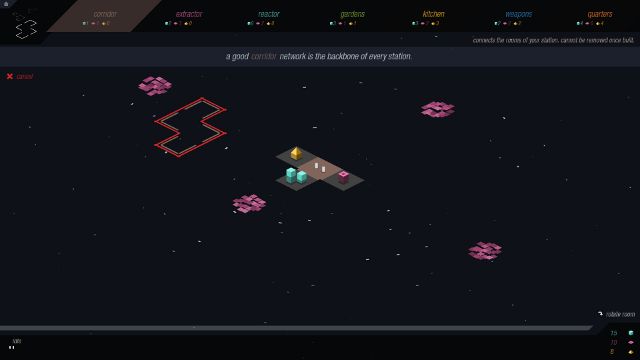 I click a few times, but nothing much happens. Exasperated, rymdkapsel’s messages hint me on further: corridors can only be connected to other corridors, not to other rooms. And the only corridor I have right now is the one brown square with the white bobbing rectangles, which incidentally is that exact shade of brown again. Okay, I think I see where this is going.

rymdkapsel helpfully places an outline of where I’m supposed to place this first corridor. I do so. 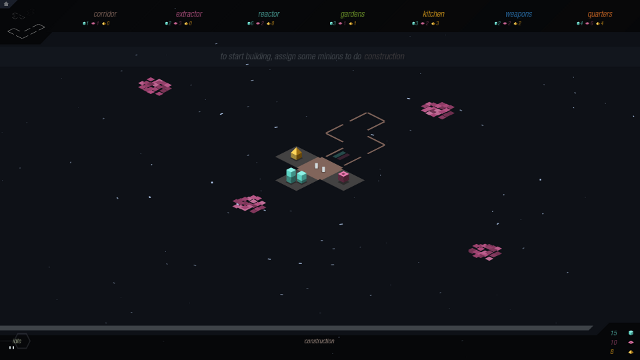 Okay, nothing much happens immediately. This is probably because I haven’t ‘assigned any minions to do construction’, as rymdkapsel puts it. Turns out the white rectangles are minions, and I can indirectly order them around: the bar on the bottom of the screen contains an overview of the jobs I can assign various amounts of minions to. Right now I only have ‘idle’ and ‘construction’ as valid career choices, so I hope both of you minions weren’t holding out for a career in the arts.

I assign both minions to construction. One of them moves to the gray square containing stacked blue blocks, and effortlessly lifts one block that’s about three times its own size. 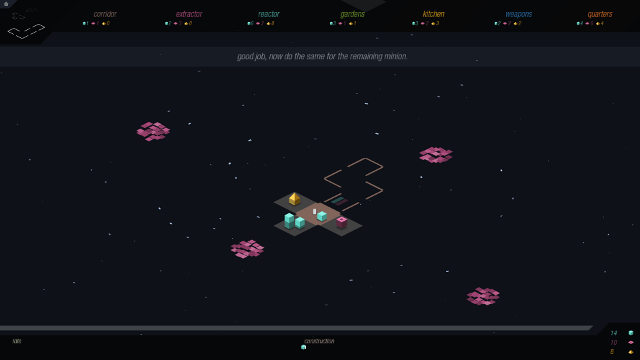 Are my minions *ants*, by any chance?

The blue block is brought to the corridor outline. It disappears, and the dark blue bar in the outline turns light blue. Okay, I see how this works. Looking at the corridor option at the top, I can see the ‘costs’ associated with it: one blue block, one pink square, zero yellow pyramids. That means that…

Sure enough, the other minion picks up a pink square and carts it to the outline. Upon reaching it, the corridor is complete! It appears into view, magnificently, spaciously, as both of my construction minions lay down for no reason. 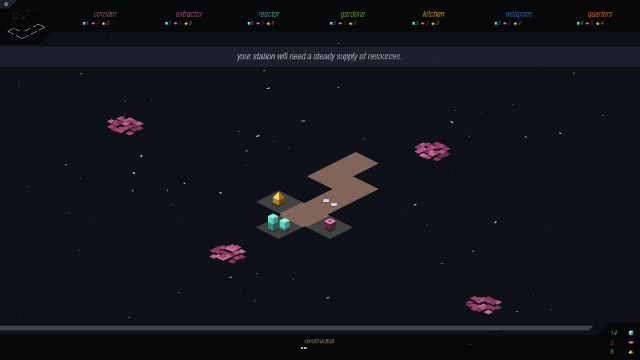 I feel I should make a union joke here, but I can’t think of anything that’s probably not horribly offensive.

The three coloured stacks represent three kinds of resources, then. I can actually see my stockpile in the bottom right corner of the screen: 14 blues, 9 pinks, 8 yellows. That’s not a whole lot! Luckily, the tutorial is just about to tell me how to get more.

Blue blocks represent energy, and I can get more of them by building a reactor. Which, yes, is the same colour light blue as the blocks, and both the words ‘reactor’ and ‘energy’ are shaded that way as well. The reactor has yet another Tetris-shape: the left-facing L block, in this case. Is that how this works? All room types have their own tetromino shape? There’s seven rooms and seven shapes, it could work that way.

Except no, it actually doesn’t. The pink resource, materials, is harvested by placing an extractor room next to one of the pink squares floating in space. Initially, it looks as though the extractor has that T-shape that the starting room has… but the way my station is currently laid out, that shape won’t actually let me connect the room to any of the particle fields. 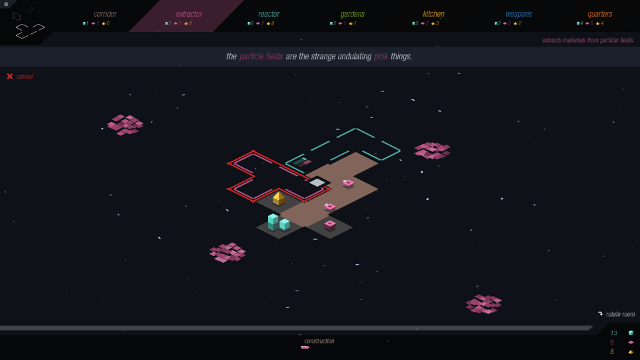 Also, you can totally rotate rooms. Consider this mentioned.

But when I click the corridor button again, fully expecting to get another Z-shaped corridor, the pink T-shape just turns corridor-brown. 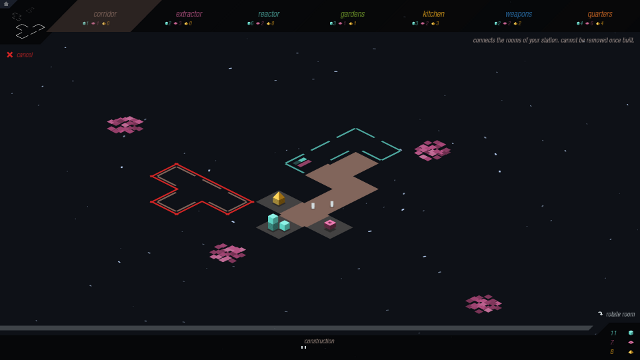 It’s only at this point that I notice the two tetromino shapes in the top left corner. Okay, so that‘s how it works? The shapes are offered in random order, and rooms just take the shape they’re offered. Interesting.

With this new-found knowledge, I place an extractor next to a particle field, where it automatically starts draining pink squares. The power generator I placed earlier doesn’t even need that, contently generating blue blocks on its own. I can assign minions to an engineering job, which speeds this generation up, but it’s apparently not necessary. 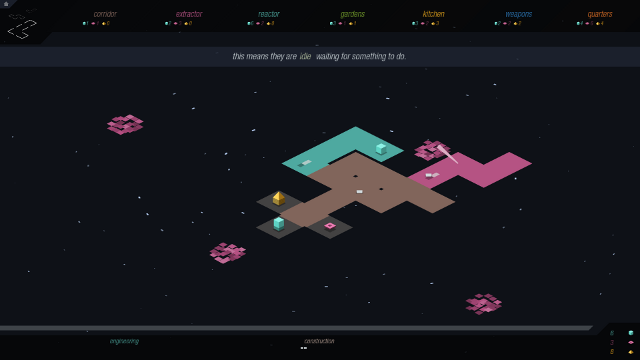 The third resource, yellow-pyramid-food, has a somewhat lengthier creation process. First, green gardens automatically produce sludge. Appetizing. Minions on food service duty take this sludge to yellow kitchens, where it’s turned into food. Okay, so it’s only a little lengthier. You get the idea.

“You are not alone in this place”, rymdkapsel warns me, as a hitherto unnoticed bar just above the jobs section slowly starts filling red. “When the red bar fills, you will be attacked. Better build a blue weapons room, stat!” 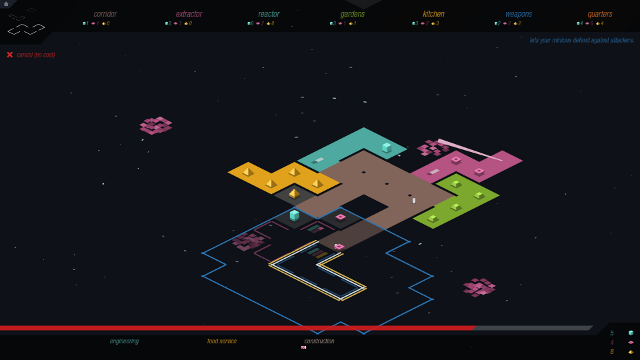 The enemy arrives! And it is… 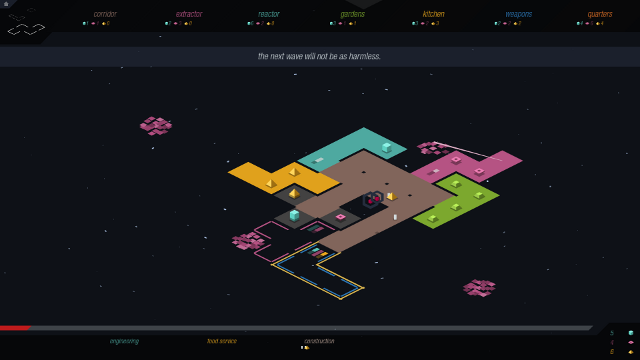 I complete the weapons room, assign one minion to defense duty, and watch as it grabs one of the little shield-like objects in that room and blasts the scouts into cinders. The red bar immediately starts re-filling, but that’s okay: I got these guys’ numbers, now.

Alright! I’ve got power, I’ve got materials, I’ve got food, I’ve got weapons! I’m basically 100% self-sufficient, just as rymdkapsel itself just told me! 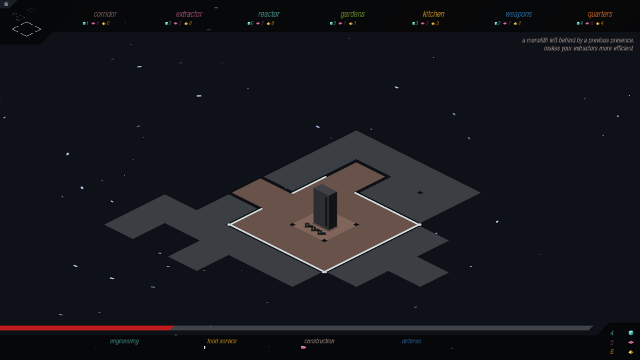 Scrolling around reveals four monoliths in the four corners of the map. Each of them offers a tantalizing upgrade: making my extractors more efficient, making my workers faster, making enemy waves arrive slower, and making my weapons shoot faster. I don’t know how I’m supposed to get these rewards out of them, but I must have them.

…right after I build some quarters, the last of the seven rooms, which will allow me to use food to increase my minion total.

And right after I beat the second wave of enemies, who actually shoot back! 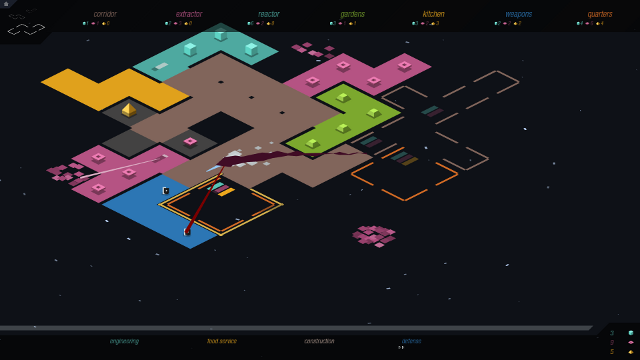 Such as it is.

I plot a course to the nearest monolith. rymdkapsel allows you to attach new corridors and rooms to currently unbuilt corridors, meaning you can theoretically plot out your entire base layout before even starting. 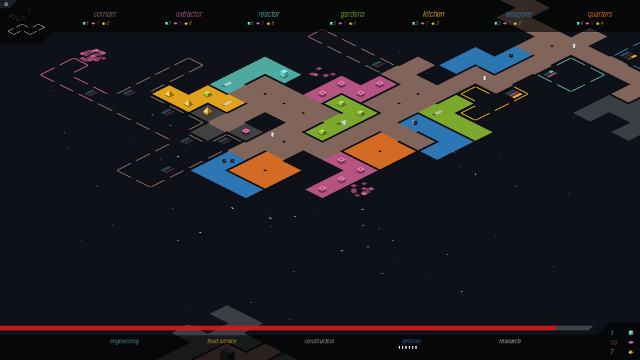 “We’ll put some corridors here and here, and an extractor here… weapons room here, across the power plant…”

Soon, I reach the monolith. Upon opening a corridor connection, I find I can assign up to three minions to the job of researching the monolith. Slowly, but steadily, they crack its mysteries. 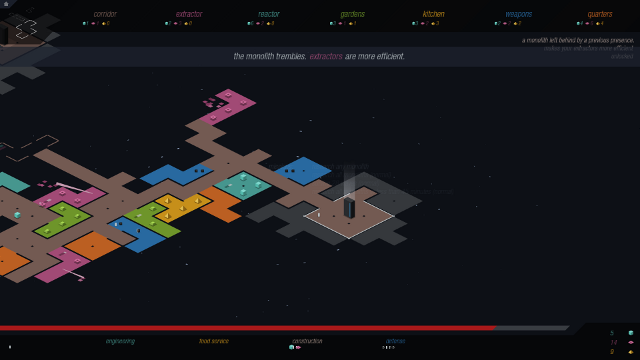 For the purposes of this review, I’m skipping all that in favour of showing you the finished deal. But believe me when I said it took a while.

A mission list popup and a Steam achievement reward me. One mission down! Three to go: ‘research all monoliths’, I was going to do that anyway… ‘research all monoliths in less than 45 minutes’, I don’t really see that happening right now.. and ‘survive 28 rounds’. How hard could that be? I’ve survived like… let’s see, eight waves, getting this far. Sure, the enemy count per wave seems to have slowly been going up. But I’m confident that I’ll be able to handle it. Nothing to do now but expand up, build my base out, and fight the undoubtedly easy enemy waves as they- 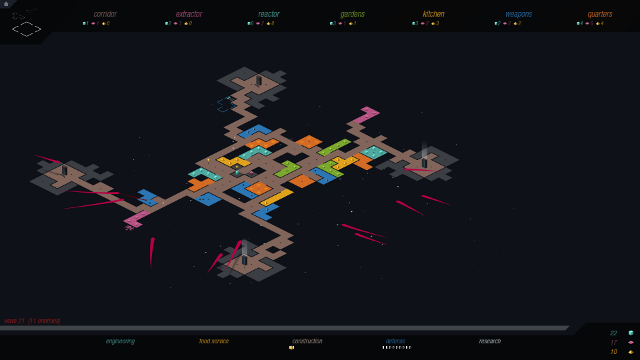 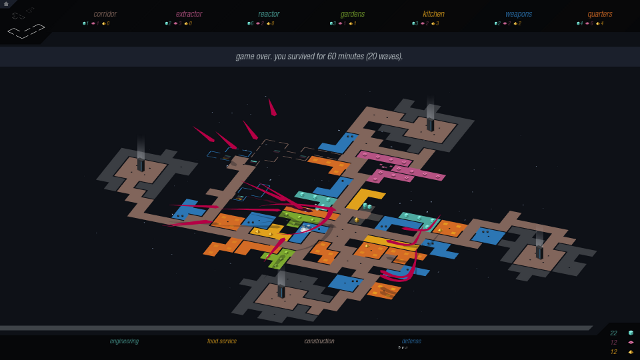 I lost and they didn’t.

Whoops. And then, after twenty-odd waves of everything going well, I suddenly lost. Well, that was unexpected. Better luck next time, I guess?

I’m actually not entirely sure how and why I lost so suddenly? Maybe playing another game will shed some light on this? Or maybe the Plus and Zen modes I just unlocked will help me get further. Check back in with y’all once I know more.