A long, long time ago, in the wayward mists of 2013, I reviewed a game called Octodad. I thought it was a quirky, fun, mechanically interesting game that mostly needed a layer of additional polish to become particularly great, and expressed interest in playing more of it later down the line.

Apparently I wasn’t the only one with this interest, as development studio Young Horses was created more or less with the express intent of bringing the world more Octodad. And last week, a little under three years after setting out, they’ve deliver Octodad: Dadliest Catch: another game about an octopus masquerading as a human man, except this time the title also has a dad joke and a pun. And if that doesn’t immediately make the sequel the better game in your book, your metrics are wrong.

A brief note before we start: even though the original Octodad is freely downloadable, and my respect for people who haven’t played it yet couldn’t possibly be lower, it would still be untoward of me to simply assume prior Octodad Knowledge in all readers. Therefore, I will try my hardest to avoid reviewing this game only by saying ‘this is similar to the original’ and ‘this is different from the original’. Some comparison can’t be avoided, but I’ll do my best to clarify everything in such a way that prior Octodad knowledge is not required to understand.

With that out of the way: 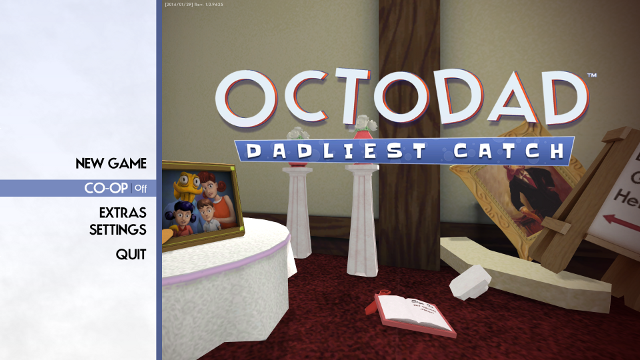 My adventures are off to a good start immediately, I can tell.

Okay, one immediate comparison: Octodad: Dadliest Catch’s menu is much less experimentally IKEA-closet and much straightforwardly usable than whatever the original Octodad was trying to go for. Whether or not you consider that an improvement depends on your tolerance for theme-over-function design decisions, but I am personally a big fan of clear and direct menu structures.

Note that that doesn’t necessarily translate to clear and direct menu content, but that’s an issue for another time. 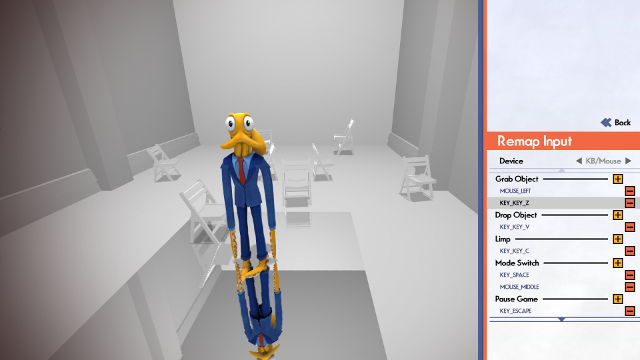 This keybindings menu could have been a little clearer, is what I’m trying to imply here.

Okay, but no joke: Octodad: Dadliest Catch actually has a fairly impressive breadth of options. Strong graphics, game options, controller setting and extended keyboard maps… when’s the last time you saw a game that doesn’t only offer subtitles, but actually has a separate option to put them in a little box for improved readability? 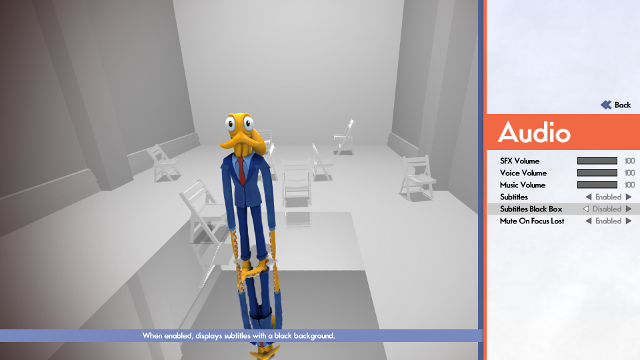 The correct answer is ‘just now, when you looked at this screenshot’.

And let’s not overlook what appears to be a fully fleshed-out system of collectible ties. 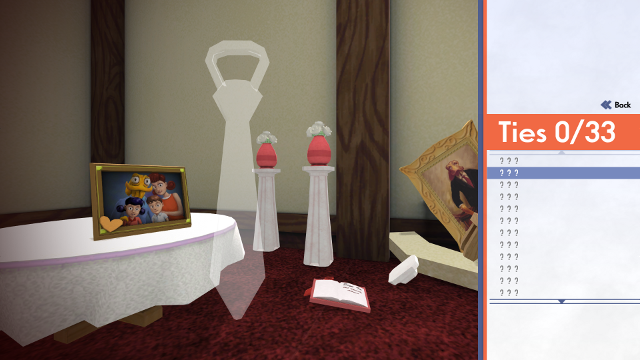 I assume the ties will be wearable, yes. Otherwise, why bother?

Octodad: Dadliest Catch also presents a co-op option, but a lack of other human beings in my direct vicinity right now means I’ll have to look into that some other time. For now, if I’m reading the title screen right, I have a wedding to attend to! New Game, away!

A brief cutscene. The camera slowly zooms in on Scarlet, previously established as Octodad’s loving wife, standing at the altar in a nautical-themed wedding chapel. Alone. Why is she alone? Did her undoubtedly human husband-to-be stand her up?

Scarlet is worried, but not too worried. 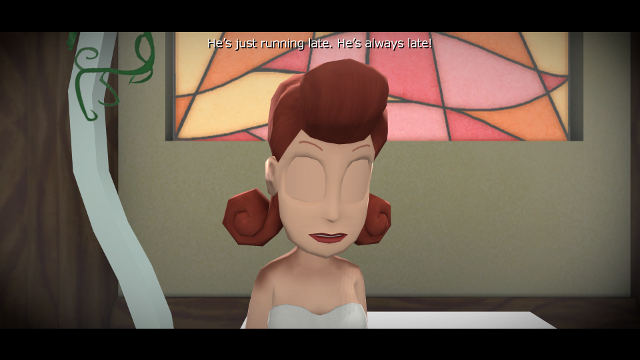 She’s used to this kind of stuff by now.

Scene change to a man I’ll call Generic McBrownhair, who’s come to check up on the groom. What is keeping him? He walks up to the dressing room door, carefully opens it, and…

Oh my lord! The groom isn’t even fully dressed yet! 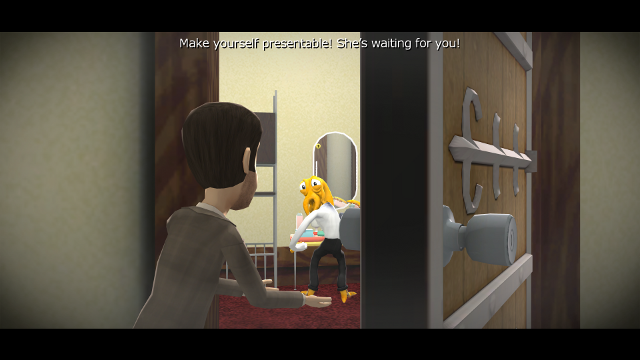 The fully human and not at all suspicious groom has yet to put on his tuxedo!

The groom, of course, is me: Octodad, pleased to make your acquaintance, loving husband and father and not at all a cephalopod in some sort of crazy disguise. Nope, nothing of that going on here! Just a human man with a poor sense of timing who’s currently leaving his bride-to-be waiting at the altar for no good reason. Seems I have my work cut out for me, here.

Alright. Getting ready for my big wedding! How… how does one go about getting ready for a wedding, exactly? I don’t really have a lot of practical experience here myself.

Apparently, step one in Plan Ready For Wedding is to sweep a whole mess of beauty products off a small table. 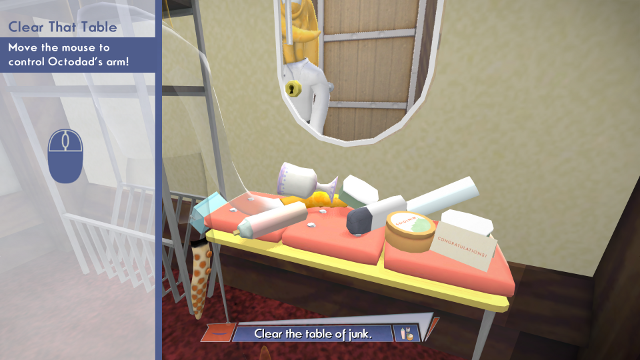 Also known as the ‘screw you guys, I quit!’ tactic of board game play.

Next, tossing the cushions on the floor. 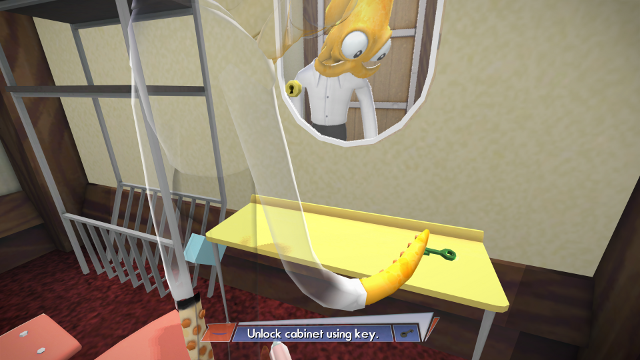 You’ve vexed me for the last time, *cushions*!

All of this is in service of obtaining a key, which I can use to unlock the mirror cabinet. 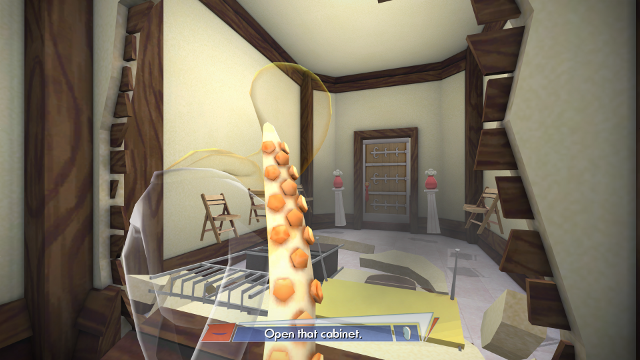 Opening it goes about as well as can be expected.

Of course, all of this is also in service of teaching me half of Octodad’s mechanics. By moving the mouse around, I can make one of Octodad’s human arms sweep up and down, left and right, on the horizontal plane. And holding down the right mouse button allows me to move the arm vertically. Moving the arm close to an object causes it to glow green, and clicking the left mouse button attaches the arm to the object. For lighter objects, this means picking it up, until such time as I click the button again. Human suction cups can be handy, sometimes!

As for the other mechanical half: clicking the middle mouse button or hitting the space bar switches Octodad from Arm Mode to Leg Mode. In this mode, holding down either the left or right mouse button allows me to swing and sweep Octodad’s legs, which I’ve previously stressed are definitely not comprised of three braided octopus tentacles each, in order to create a kind of locomotion that could be compared to walking. 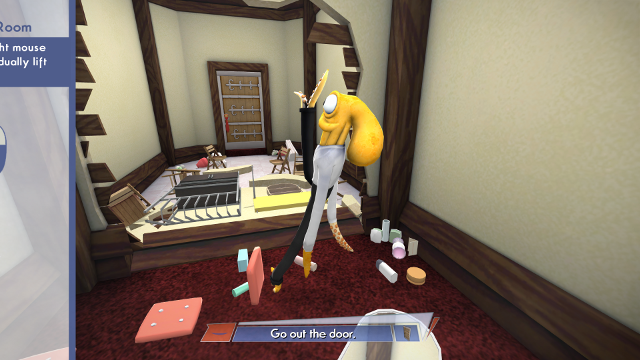 “This is how some humans walk, right?”

Through the chaos and destruction following my opening the mirror cabinet, I walk to the door. There is a tie on the door. On the one hand, pop culture tells me that this means I should probably knock before entering. On the other hand, free tie! 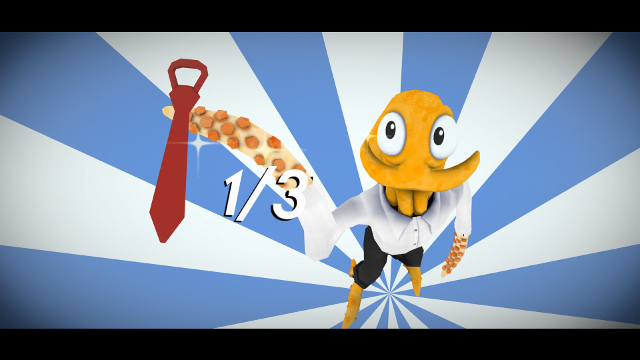 Stark red! A classic tie for any suit.

Next stop, finding my tuxedo. Just as soon as I… 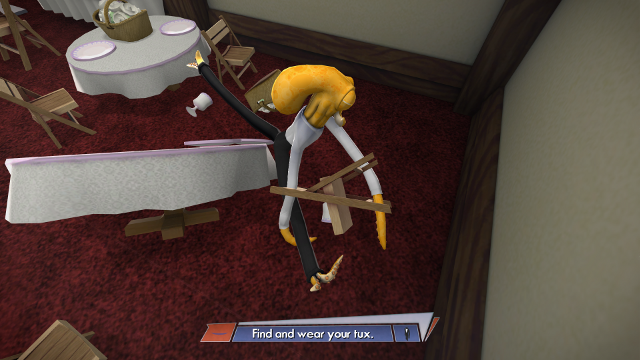 “Excuse me, I… whoops! I appear to be stuck in the furniture.”

Hold on, is that a dance floor? 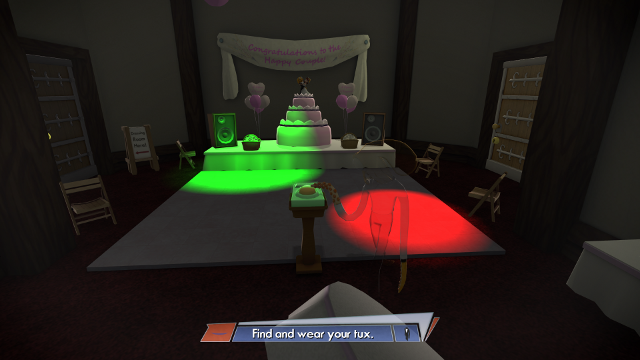 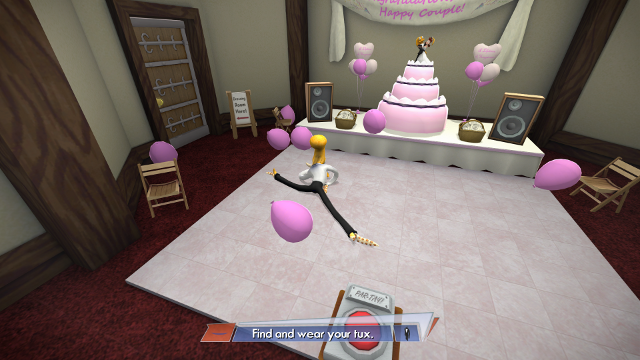 One tux later, I find myself in a hallway with multiple doors. One door is clearly the ‘correct’ option, but I figure I might try exploring a little more, first. I’m late anyway, those five minutes aren’t going to matter! 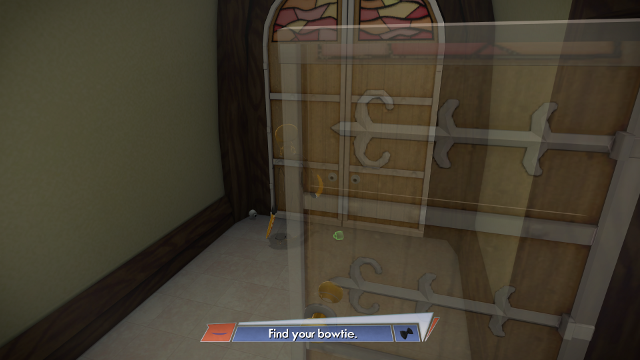 I can immediately tell that this passive-aggressive way of saying ‘you can’t go here’ will be a staple of this game.

My bow tie is stuck to a stained glass window of… is that Cthulhu? What kind of church is this? Though that would actually explain the madness of the tumbling walls and pointless nightmare-doorknobs a little. Regardless, the only way I’m getting to that bow tie is by throwing wedding presents at the window. 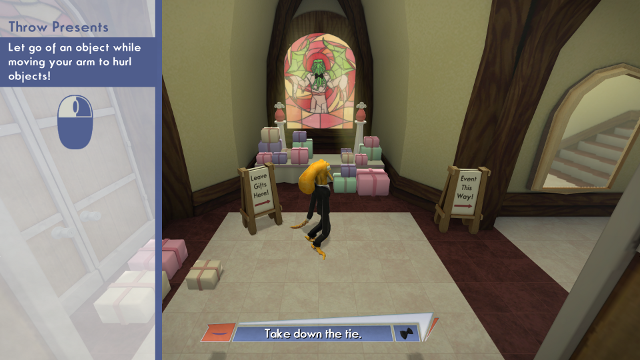 Ties trump *all*. The Old Ones will understand.

Finally, I find myself in the grand hall, better late than never. Here, I face my biggest challenge: walking down the aisle without any of the many, many guests — all on my wife’s side of the room, obviously — getting wise to the fact that there might be something fishy about me. 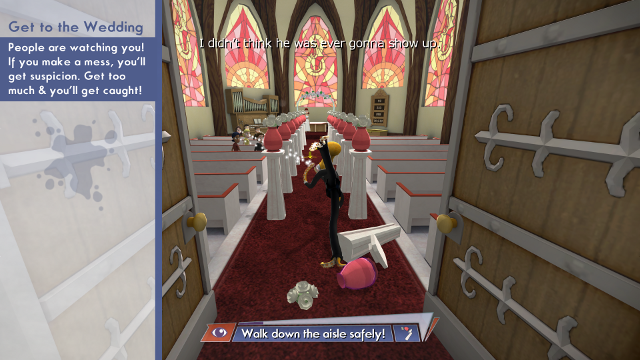 Ha! It’s funny because I’m definitely *not* an octopus!

As with the previous Octodad, perhaps the major ‘fail state’ element in Octodad: Dadliest Catch is Suspicion. My disguise has most people fooled at a first glance, but making too much of a mess — knocking over things, falling on your face, hitting people with flailing tentacle arms — will bring increased scrutiny… and no single disguise is foolproof.

As it turns out, navigating a flailing mess of stuck-together tentacles through a small aisle flanked by pillars and vases, while under the watchful eyes of half a dozen wedding guests, is difficult. My suspicion bar fills up with octopus ink halfway before I make it to Scarlet.

Once I do get there, though… 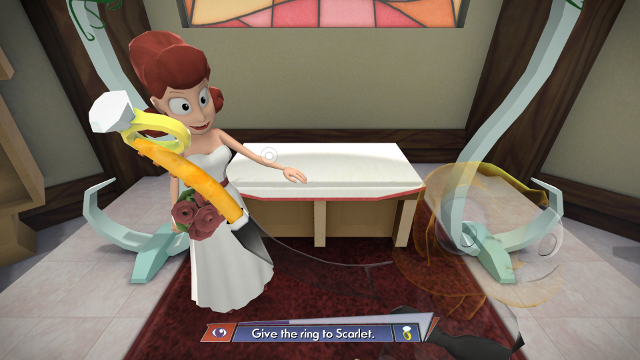 Music starts up, credits start rolling, and I’m treated to the cinematic experience of watching Octodad fall through the sky, knocking down the names of the people who worked on this game. 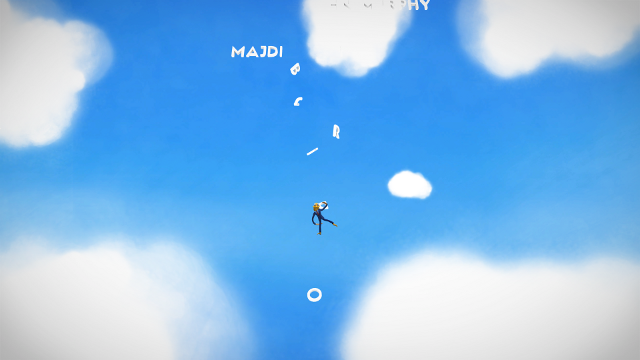 I assume this was done to *put these people in their place*.

Is this… is this the end of Octodad: Dadliest Catch already?

No, of course it isn’t, my friends. This is only the beginning. 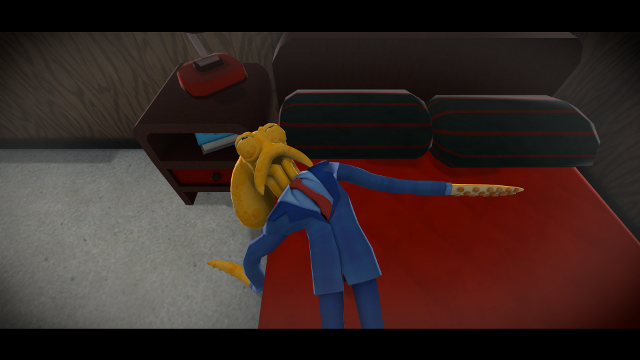 Onward, then. To further adventures!