This concept is kind of hard to explain, so let me use an example… Rayman Origins holds a special place in my heart. Part of that is because it’s an action-platformer, a genre I love and have played since I was little, but part of that is also because it’s the happiest, most whimsical and gleeful game I’ve ever played. And the more I’ve played it, the more I’ve come to realize that the game — and I mean everything about it — is about happiness overcoming grumpiness.

When you play the game, or watch a video of it, pay attention to how everything looks and sounds. Look at everything that helps the player and everything that stands against the player. You’ll notice that every “good guy” is happy, thrilled, or at the very least cheerful, while all the enemies are portrayed as angry, sad, and just generally ill-tempered.

The main player character Rayman (as well as all the other playable characters you can unlock) is always excited to be around and makes playful gestures and noises as he traverses the levels. The creatures you’re rescuing are Electoons, and they basically are Rayman’s equivalent of the animals in Sonic; you find them in boxes throughout each level and you break the boxes to save them. The Electoons are basically little pink smiley faces, and you can rely on them to always be ecstatic in your presence. The Lums are the substitute for coins, and they’re little yellow balls of light that provide big smiles. You also find hearts that serve as  your extra life, and they float around you and smile constantly. The examples go on and on. 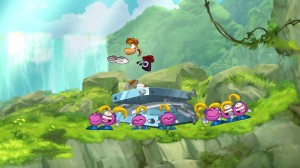 This theme extends to gameplay. While you, the happy Rayman, jump, float and punch through the levels with childlike enthusiasm, the enemies are all content to sit or stand around in their bad moods, only taking action to attack you when you’re near. And when you jump on or punch an enemy, it turns into an adorable big bubble that gives you a Lum. And the story, while extremely simple and basically only getting screentime during the opening and ending cutscenes, reinforces the theme: Rayman and friends are all lounging and snoring so loudly that the bad guys underground can’t sleep, so the bad guys then lash out, take over the land and throw the good guys into cages. It’s simple, but it gets the point across — the antagonists’ motivation is that they couldn’t be happy because others were just too happy. 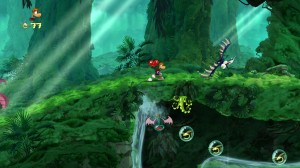 Note how the dark, almost monochromatic enemy stands out against the lush, vibrant world.

Instead of the standard good vs. evil, Rayman Origins very effectively and potently conveyed happiness vs. grumpiness, and that tone made the game such a joy to play. It especially fit because of the nostalgic appeal of the game, which plays to the aged gamer’s inner child.

One big topic lately in the gaming world has been the “Damsel in Distress” trope and how it negatively affects game narratives. So many games go for the low-hanging fruit of making you play as The Man and making your mission to save The Girl. Your motivation is supposed to be out of “love,” but that feels less like love and more like possessiveness. I’d think that a better conveyance of love within a game would be to have two characters working together to overcome their problems. That way you’d be presenting an active and healthy relationship, instead of a relationship that gets broken off right away by an evil kidnapper. Love isn’t about one saving another. Love is about two people helping each other and both being empowered and fulfilled.

And as I think about this, I wonder: What if someone made a game that was about a loving, fulfilling relationship?

You could use similar thematic and tonal techniques as Rayman, but instead of happy overcoming grumpy, it’d be about love and togetherness overcoming entropy and isolation. The story could involve one big world being broken up into pieces — they could either be Outland-style floating islands or one continent that’s now segregated by walls. Then you have a loving couple that’s tasked with bringing the world back together, using some sort of magical MacGuffin that tears the walls down or fuses the islands back together.

In gameplay this would be a two-player coop game, and the players would have more power when working together. For a coop-focused game to work you need to make the cooperation vital. Since I’m imagining this as an action-platformer (though you could play this concept out in any number of genres) I’m thinking you could involve puzzles that require two players, and in the combat you could give the players benefits when working together. They could have special abilities they have to activate in unison to get the full effect, and you could center all the upgrades or gradual new abilities around cooperation so that by the end they’d have to work together to make it through alive.

I was originally imagining a man and woman, probably because of personal projection, but you could one-up that by making four characters that the two players can choose from — two men, two women. Or if we want to be truly inclusive, you could make a character creator and have gender be a slider bar instead of a binary choice!

Maybe it’s because of what’s going on in my personal life, but I could really see myself enjoying a game like this. I think a game that conveys a happy and fulfilling relationship through gameplay is something we could really use in our community.